If you’re already a dog-friendly cinema connoisseur and want to take your cinema experience to the next level (literally), then the dog-friendly Rooftop Film Club at the Bussey Building in Peckham could be just the thing for you! 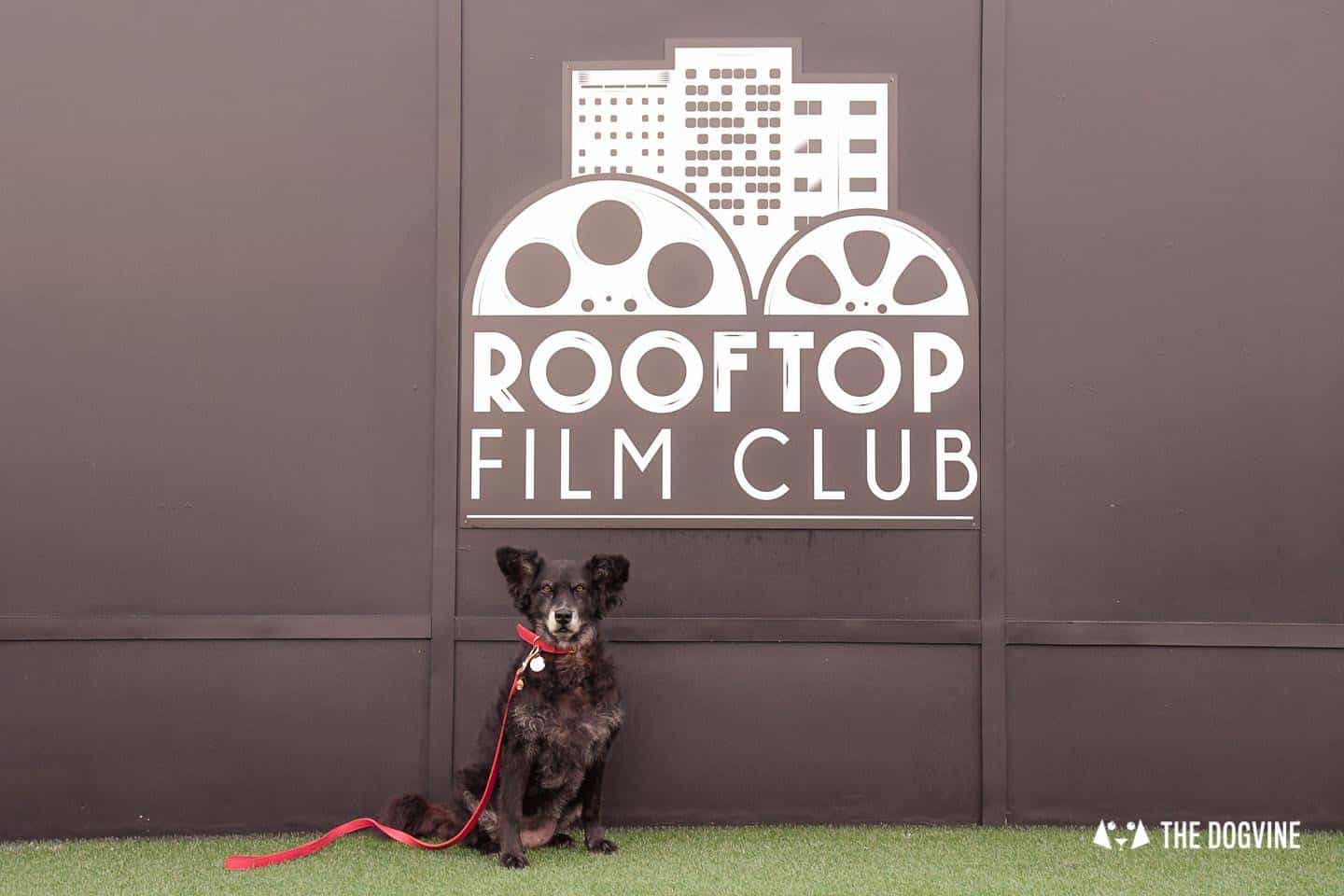 Last weekend several London doggos (including Belinha) were invited to a special Doggy VIP Rooftop event to try out this unique and special cinema experience. Here’s what we got up to… 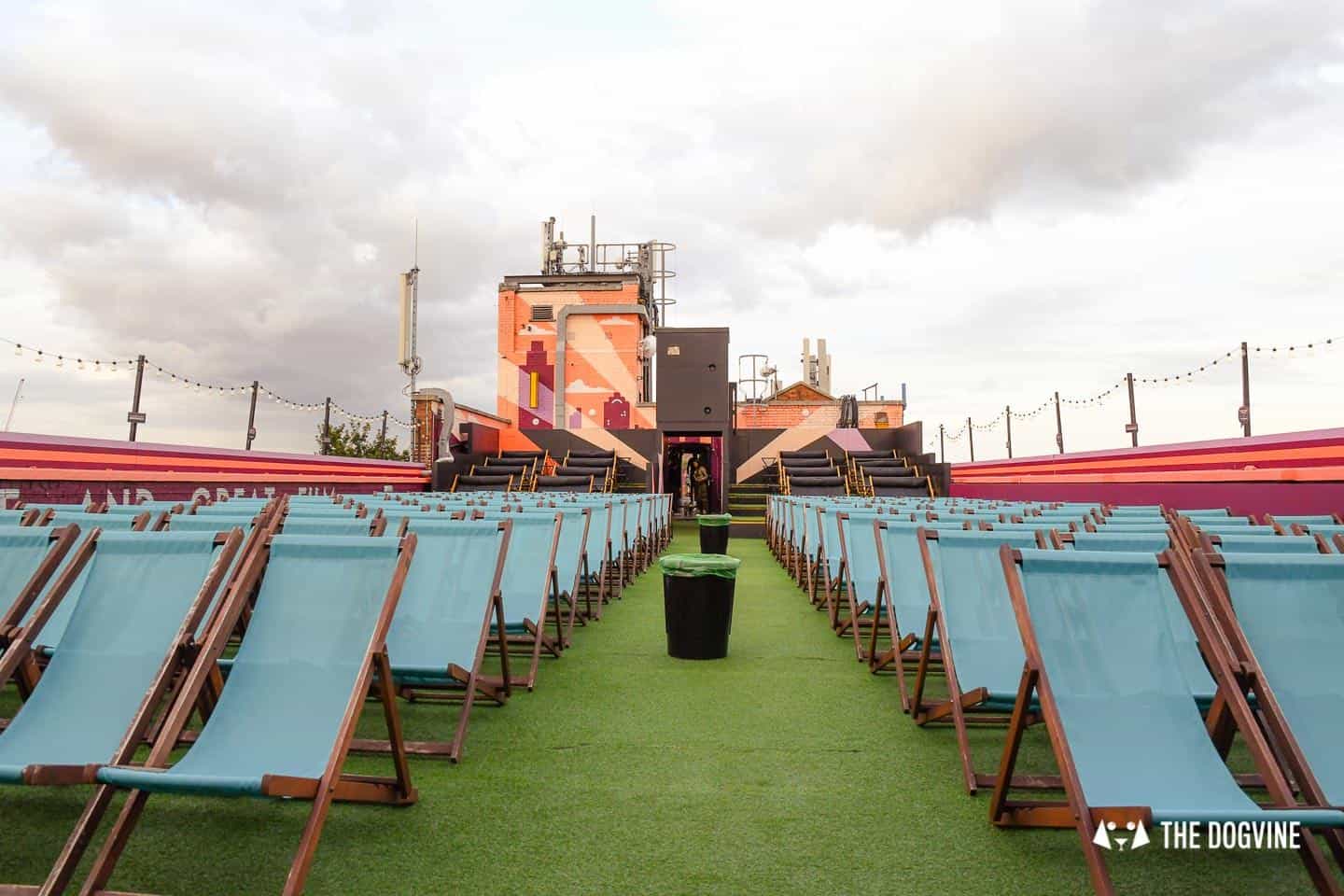 The Rooftop Film Club in Peckham is one of three Rooftop Film Clubs in London (the others being Stratford and Shoreditch) and the only London Rooftop Cinema that is currently dog-friendly. Given it’s spectacular outdoor location, the cinema operates from May to September each year. In that period, any and every night the cinema is open, is dog-friendly cinema night! 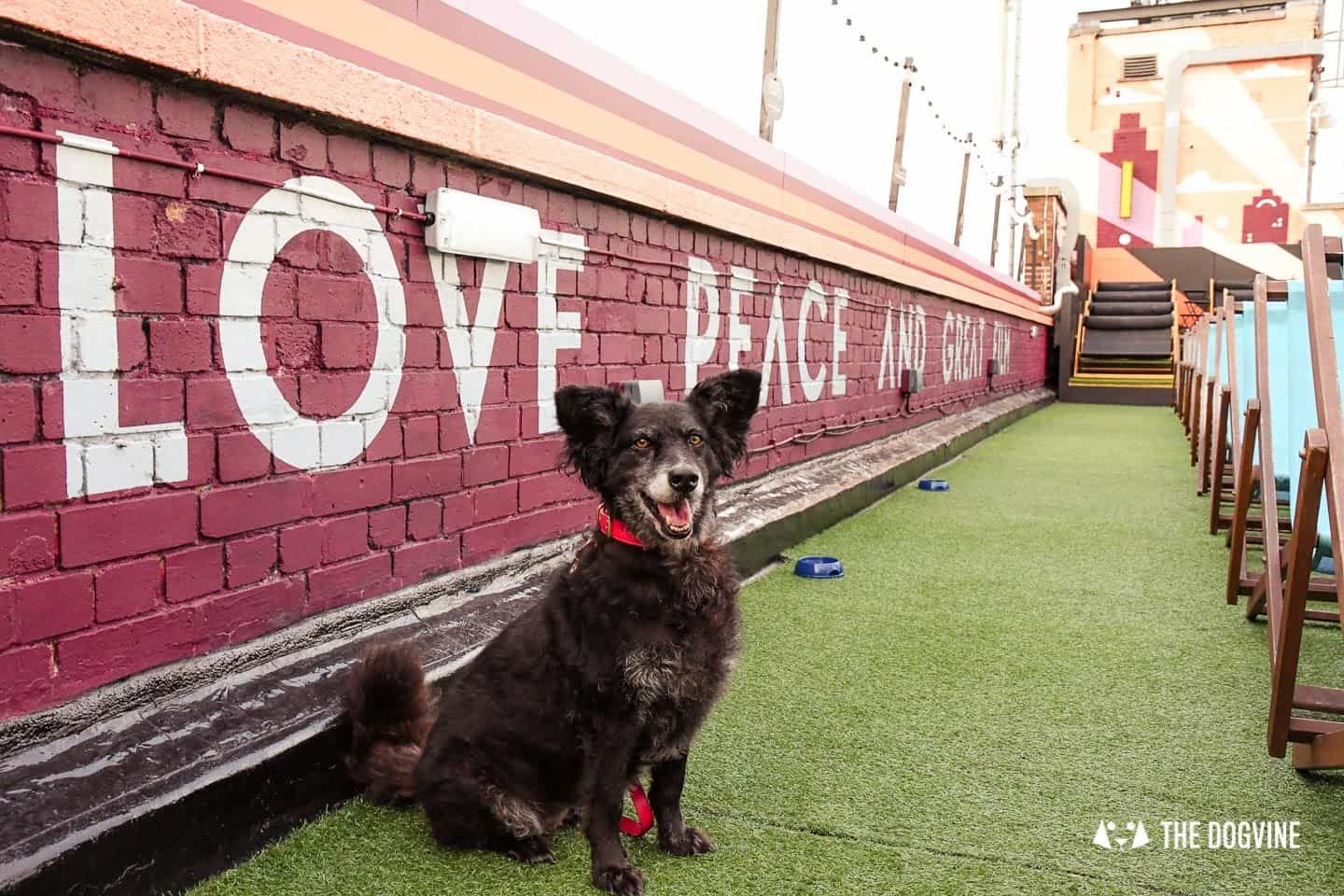 The Rooftop Film Club Peckham has been dog-friendly since 2016 along with the neighbouring Bussey Rooftop Bar (more on that in a moment). It’s a silent cinema (meaning everyone has their own headset to listen to the film), showing both retro and current releases nightly throughout the Summer each year. 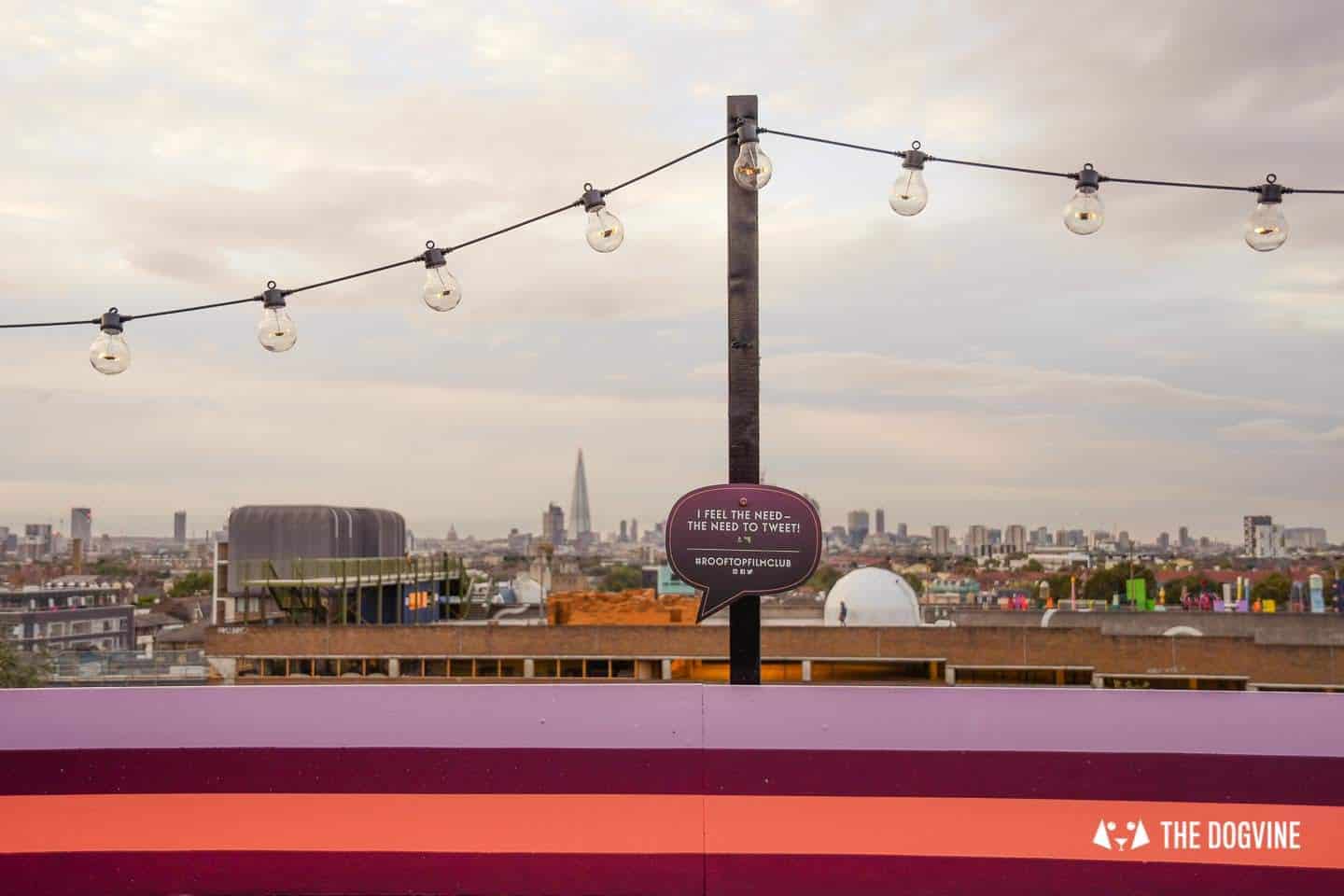 Honestly, I didn’t expect to be as impressed as I was with the setting. There is simply something quite magical about watching a movie from a deck chair on a London rooftop with pretty festoon lighting blowing in the breeze between you and the spectacular skyline views! 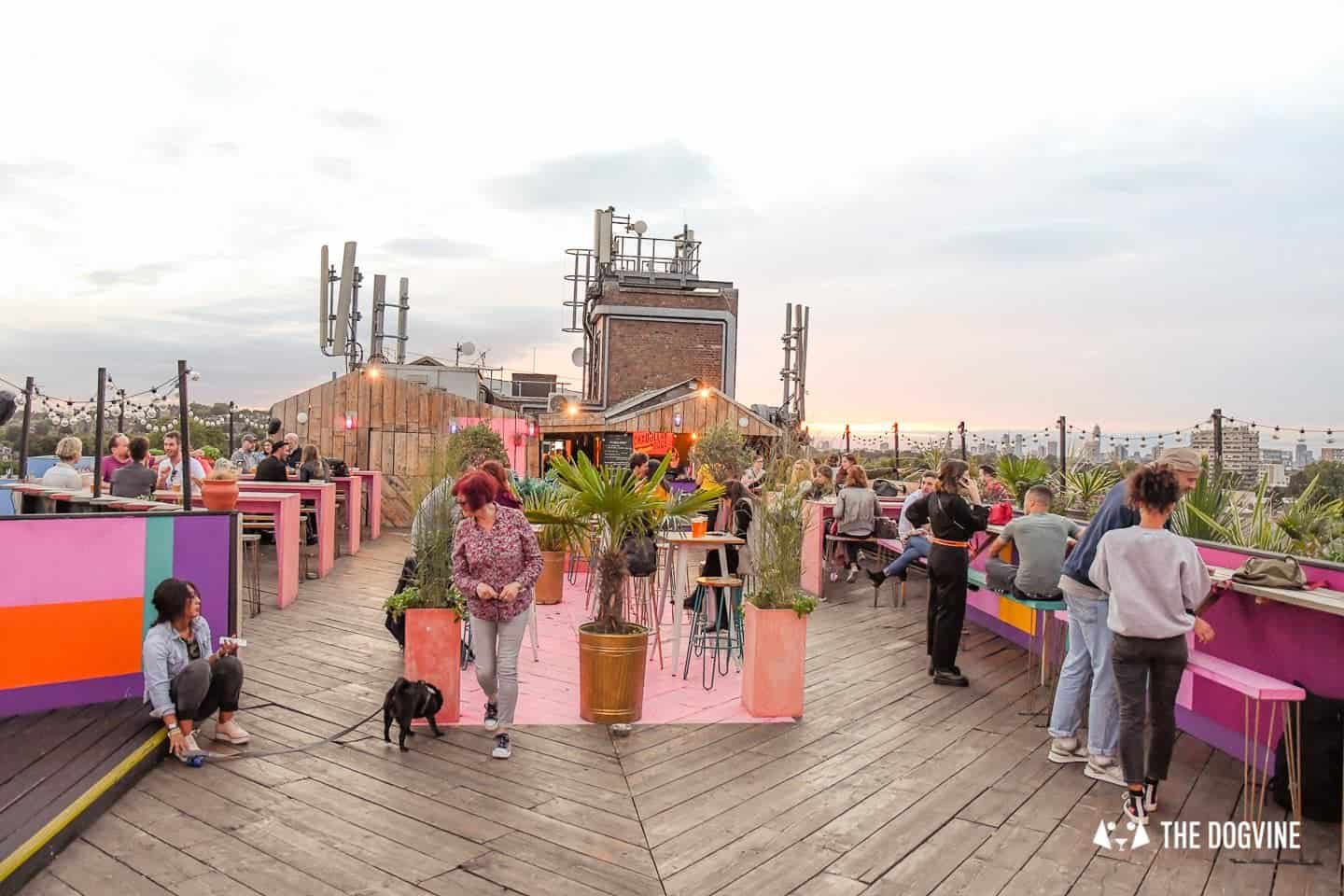 Of course you can just go along to the dog-friendly Bussey Rooftop Bar without going to the Rooftop Film Club to enjoy a drink and the view but the two together make a fantastic night out in our opinion. 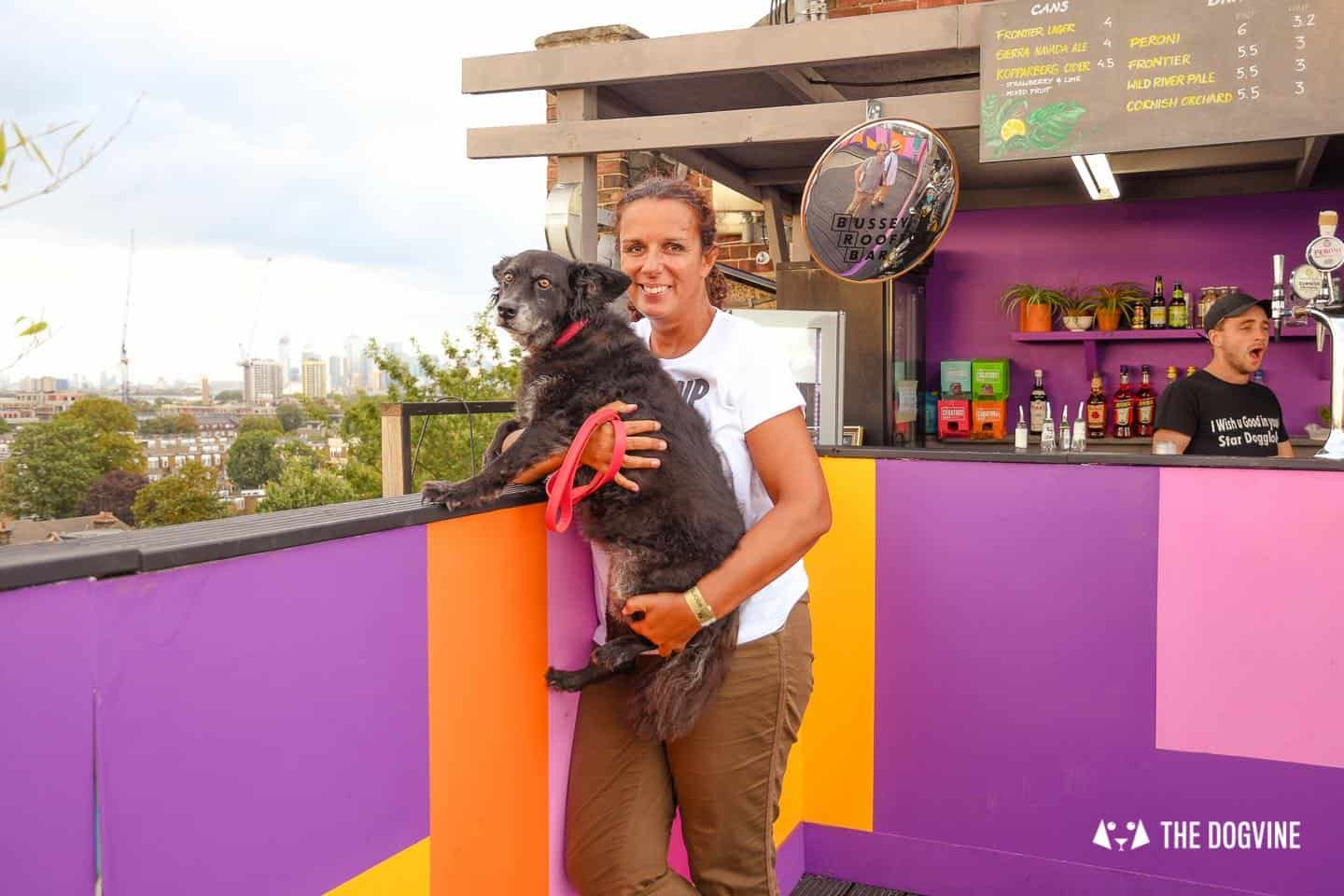 The colourful Bussey Rooftop Bar serves drinks and cocktails as to be expected but I was pleasantly surprised that the resident Rockadollar food concession catered to vegetarians and vegans too. So for once in a very long time, I was able to enjoy a (delicious) hotdog before going into the cinema! 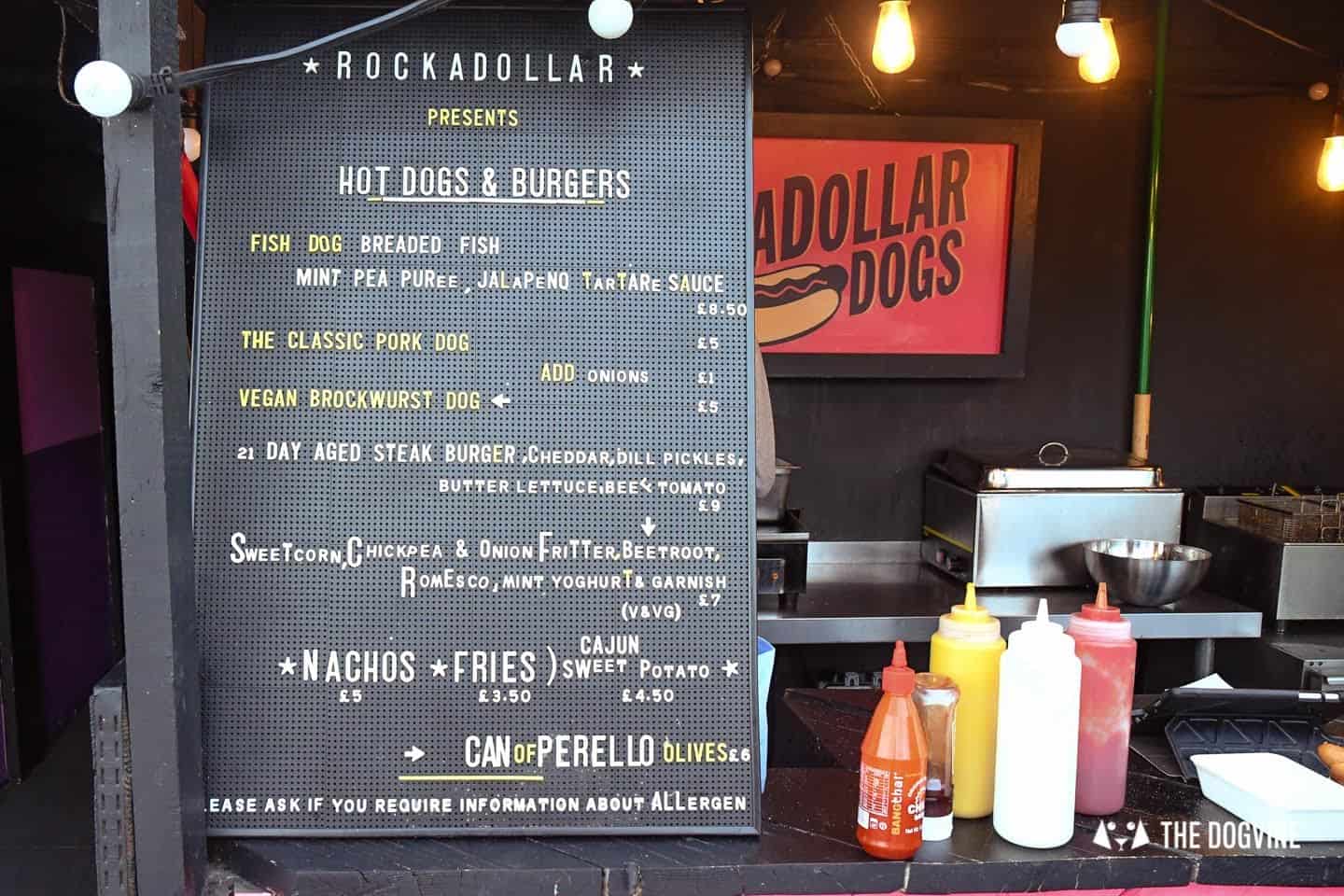 After some puparazzi posing in the bar, we headed over to the Rooftop Film Club cinema for the film which happened to be the very entertaining ’10 Things I Hate About You’. 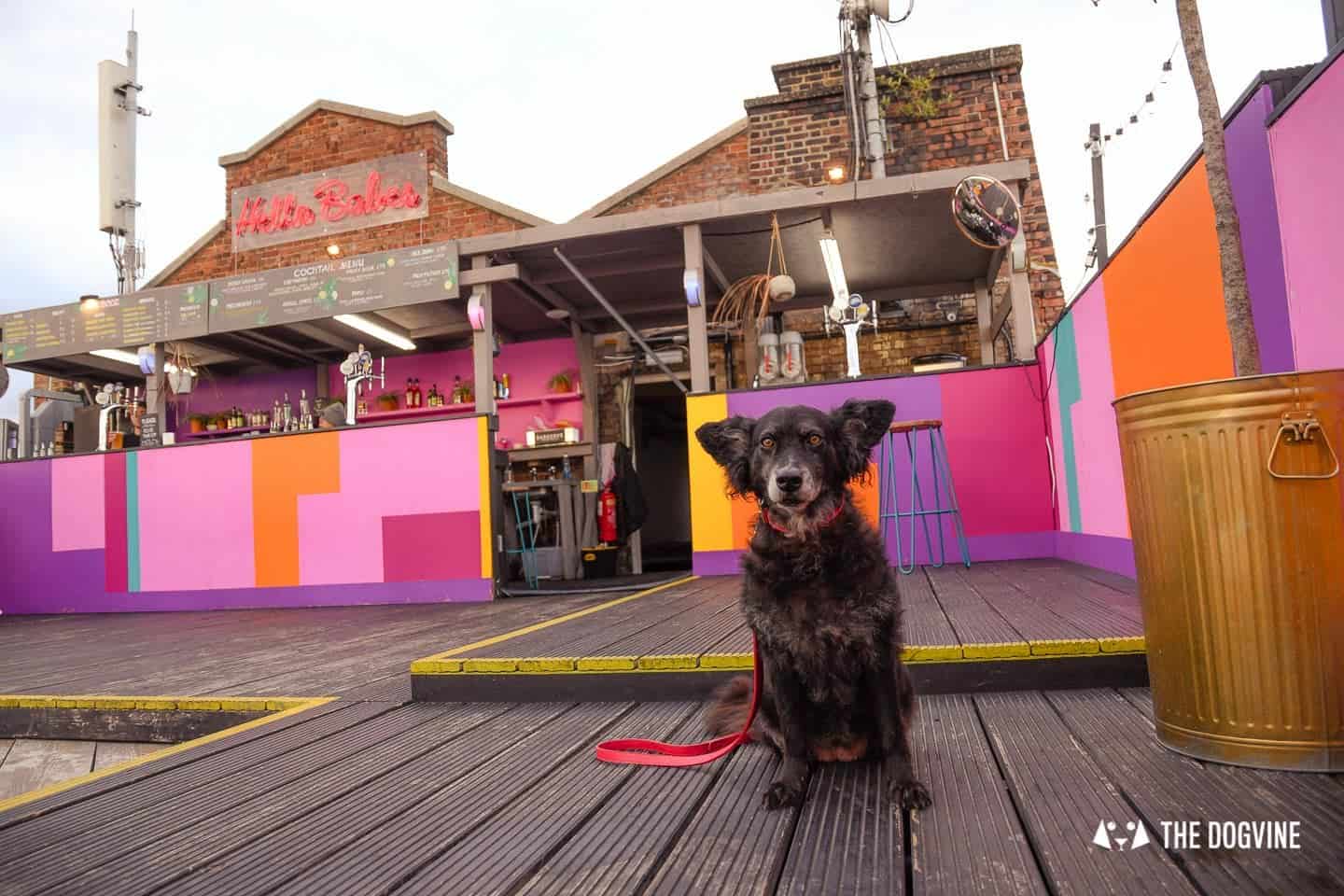 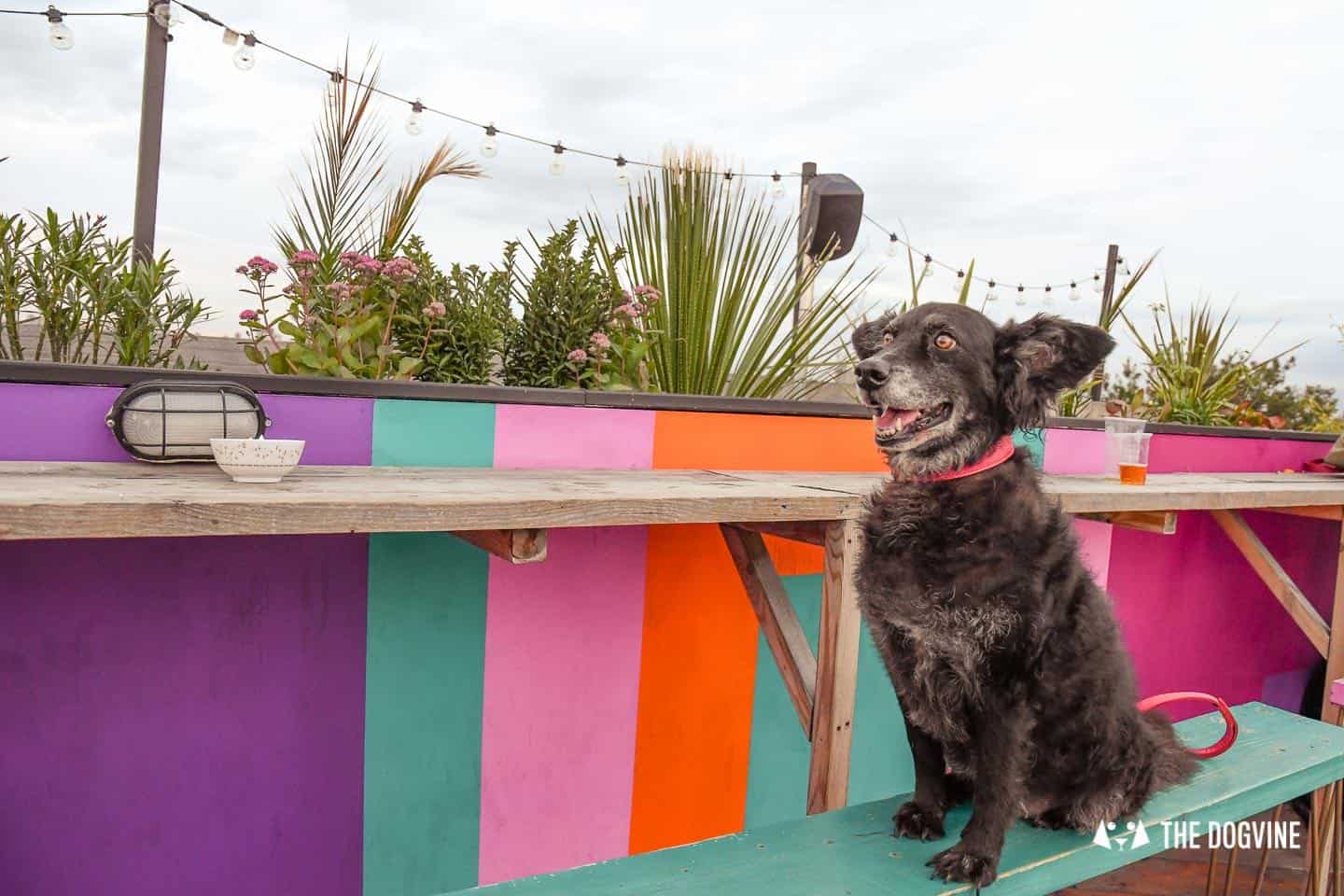 Once you step into the Rooftop Film Club, you can see why this is a unique experience. The London skyline beckons left and right, with views as far-reaching as The London Eye and The Shard. 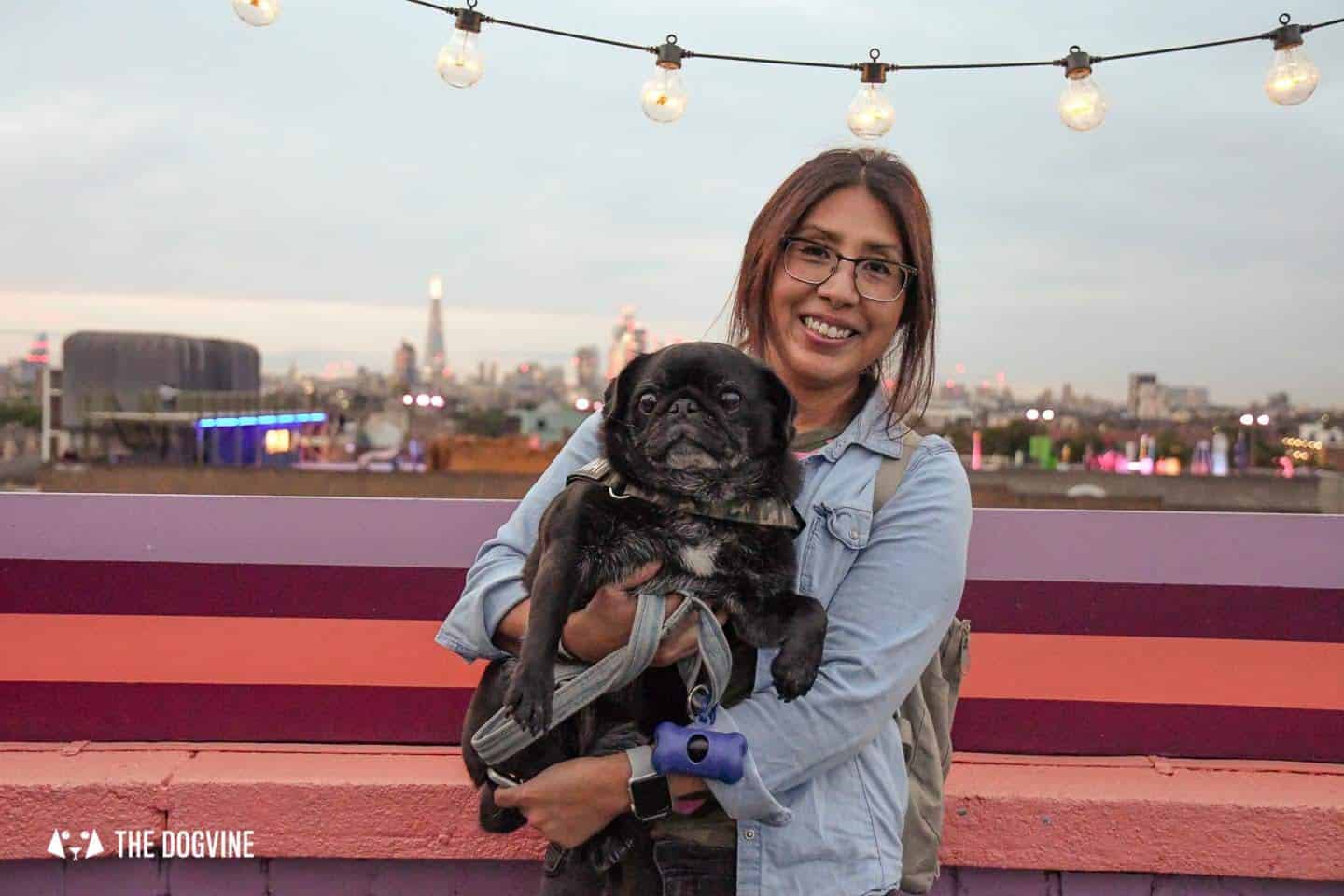 There is even a specific designated spot where you can get the ‘Best View in the House’…but pups will need their human for that one (unless they happen to be Great Danes). 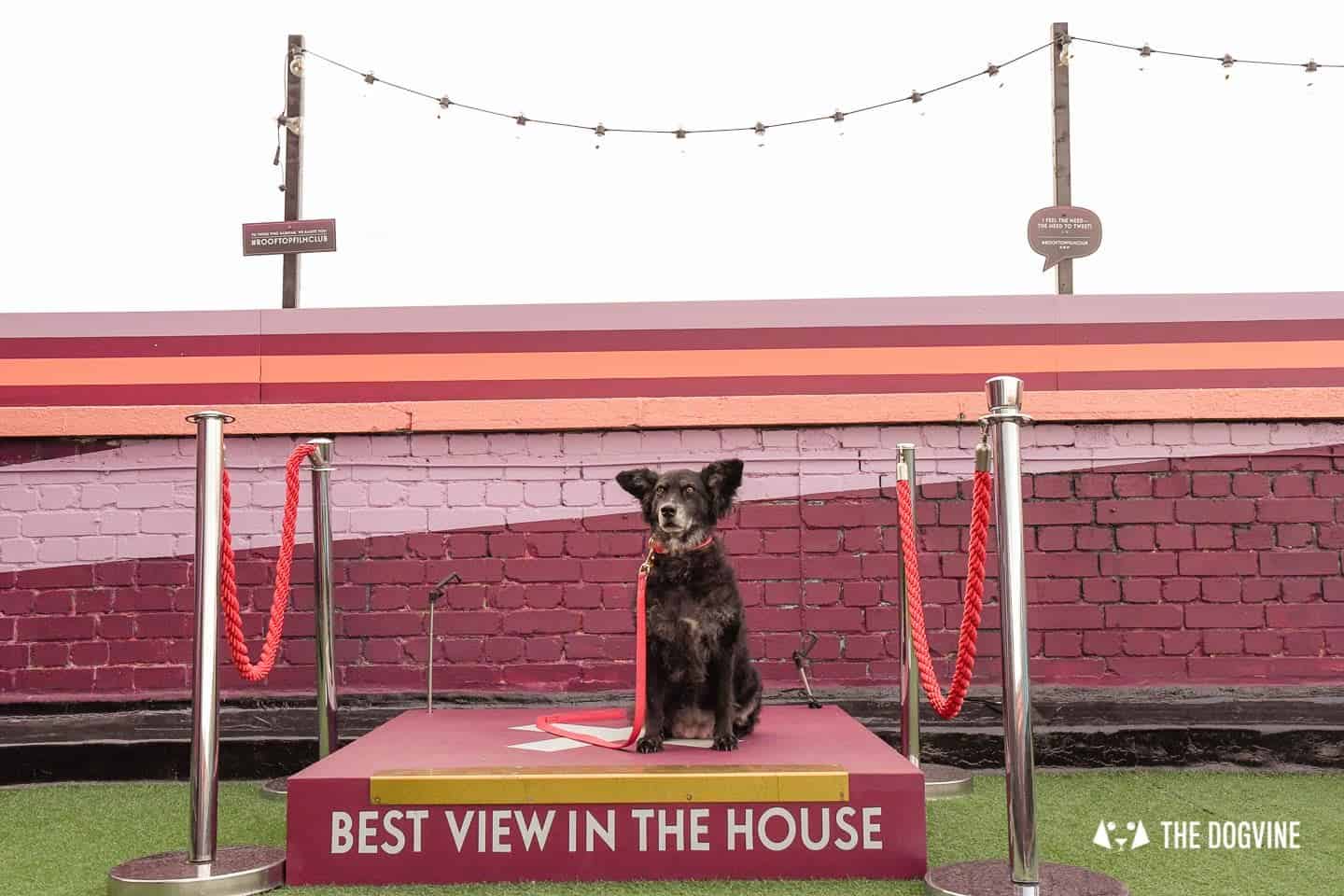 Once you’ve admired the view, it’s time to find a seat. Seating is on a first come, first served basis according to your ticket type so as a pup owner, I would definitely get their early to bag one that will give the most comfort for your pooch. 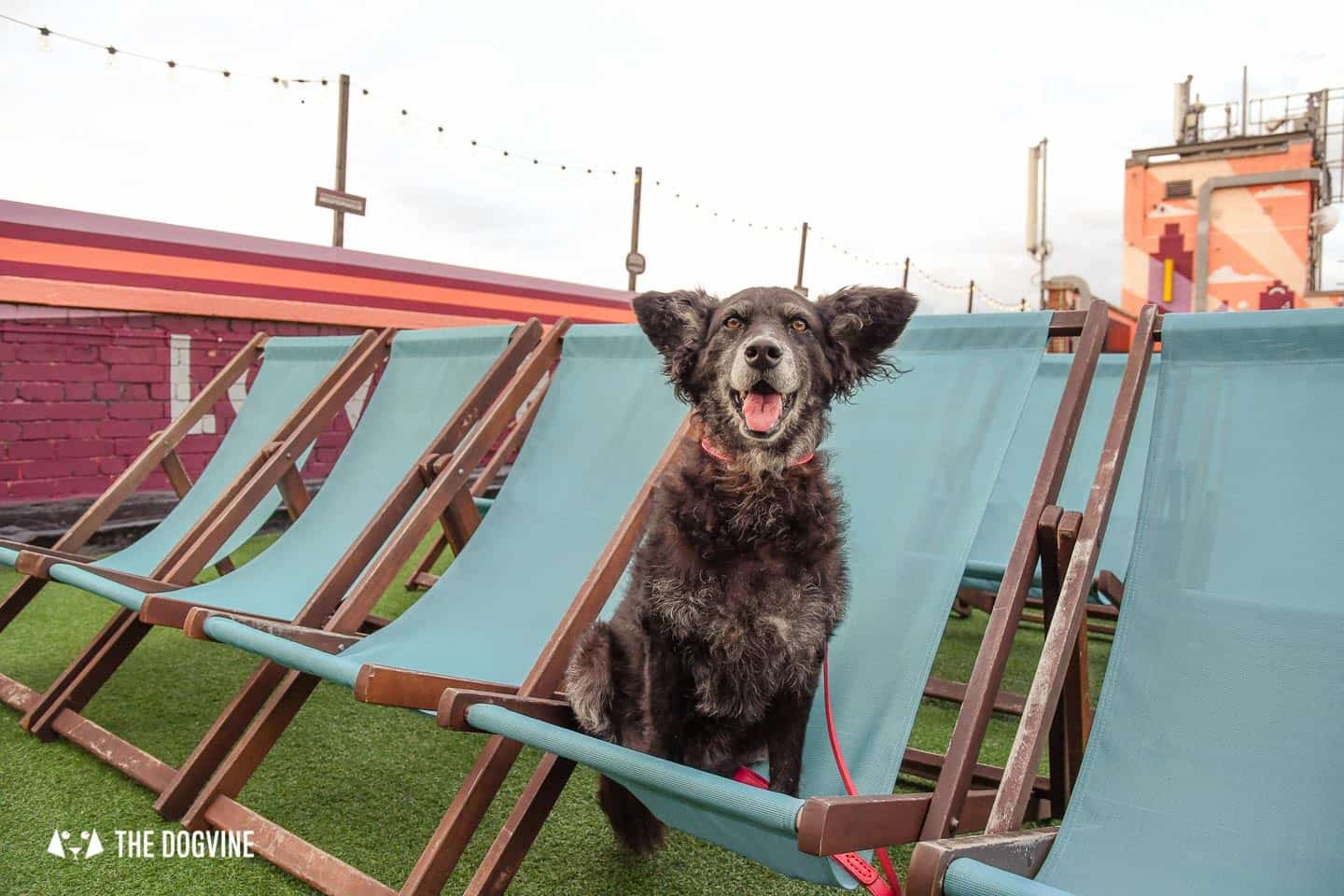 There are two types of seating at the Rooftop Film Club, the blue lounge single deck chair seating which is all on one level and then the black premium double deck chairs or ‘Love Seats’ (each with a side table) at the back which are tiered looking down on the lounge area. Belinha happily tried out both seats and quickly declared the Love Seats her favourite! 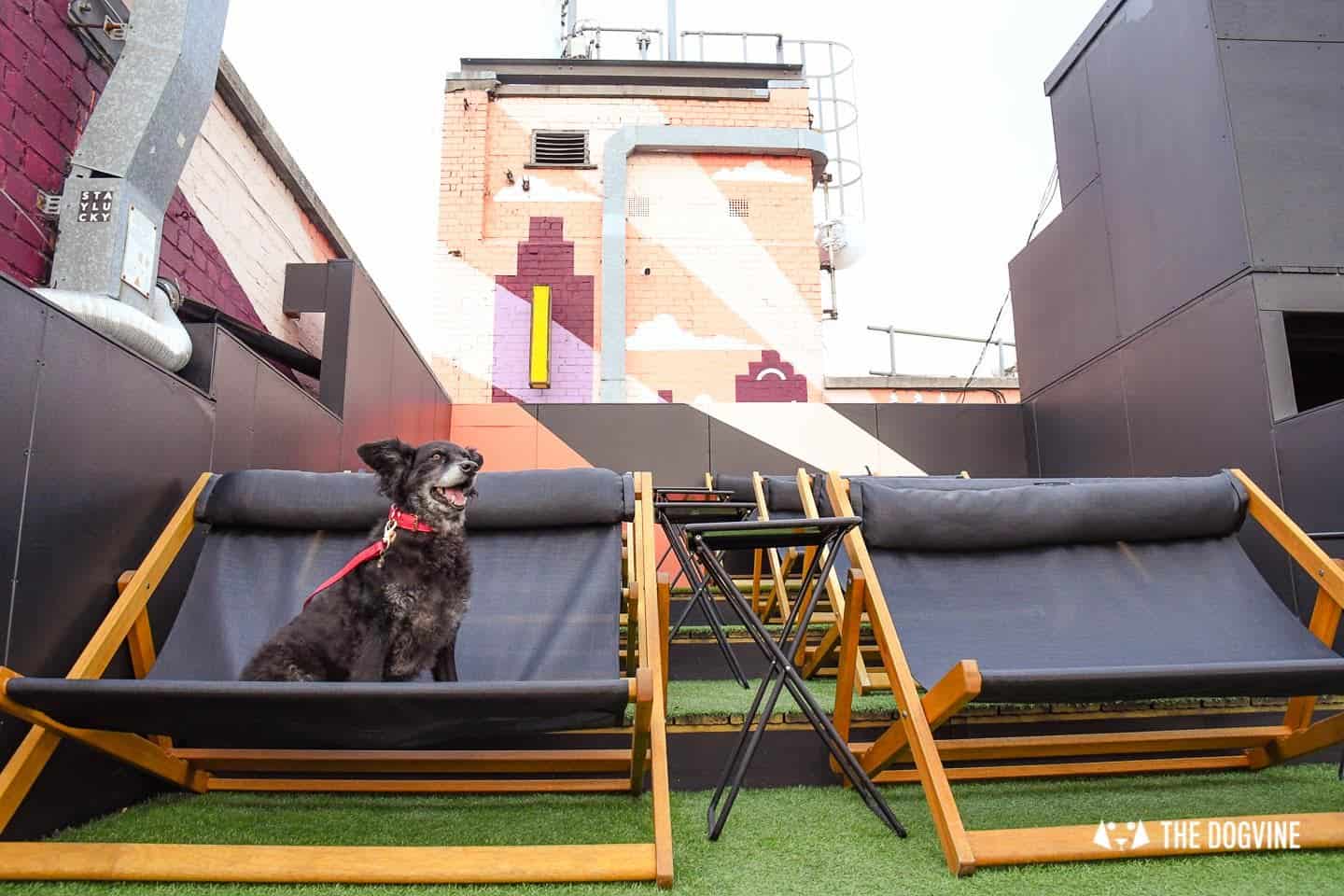 Dogs can sit on your lap or on the floor depending on their preference (and size) but if you wanted them to have their own seat, you would need to buy them a ticket. 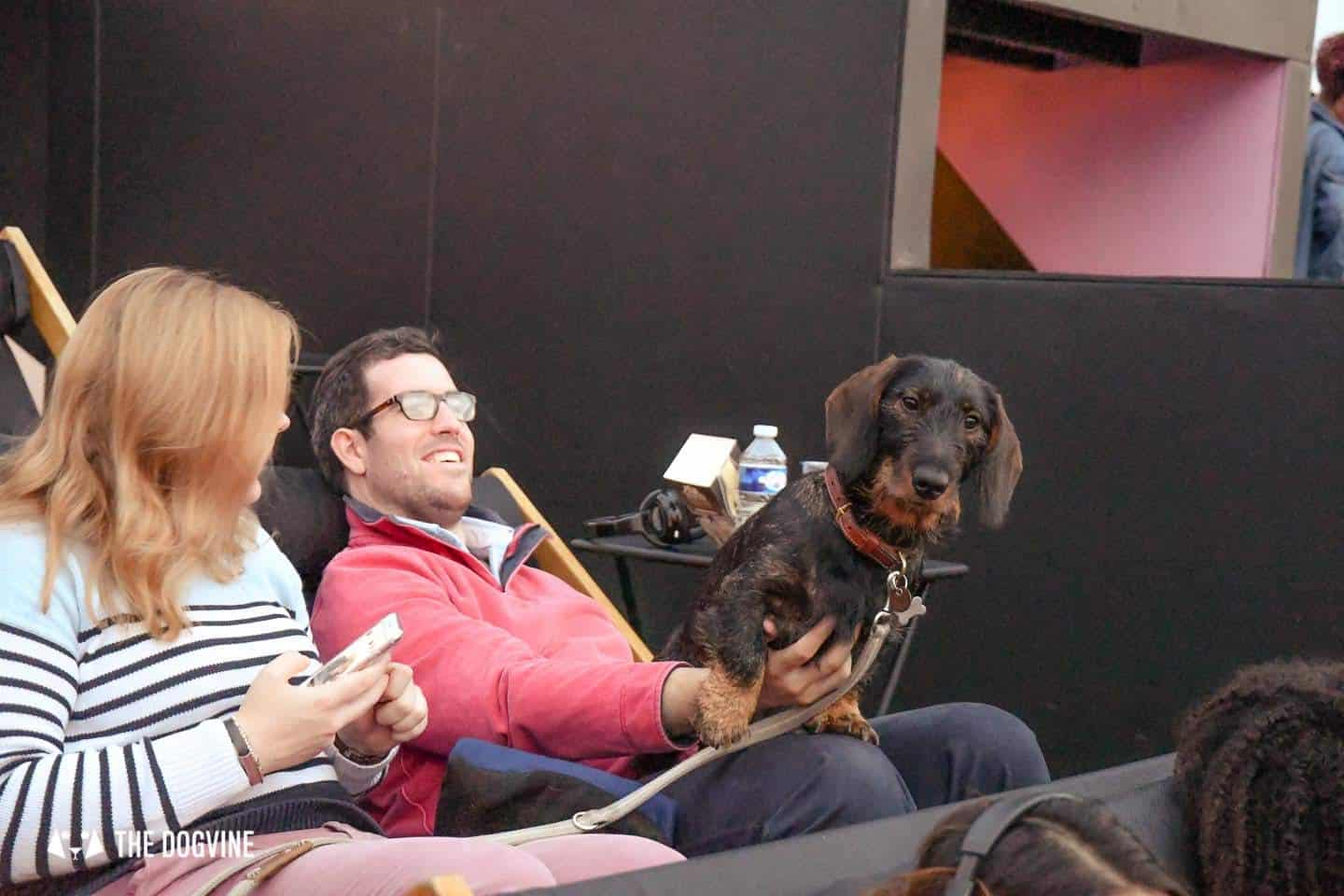 We were seated on the Love Seats and there was room (just) for Belinha to squeeze in between myself and my partner (she’s a medium-sized 20kg). Although by the end of the film, I was temporarily relegated to the floor so her highness could stretch out! 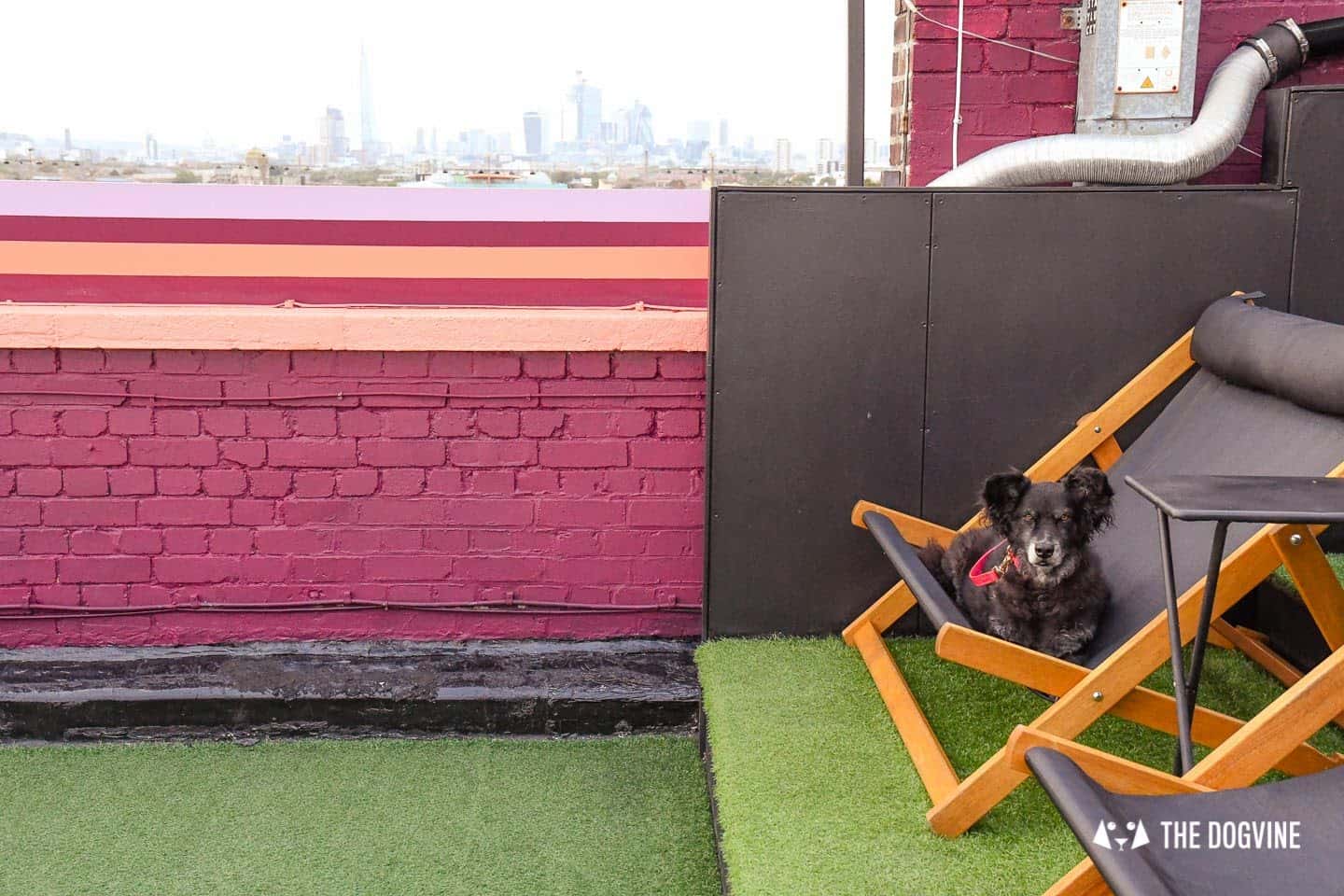 You’re given a blanket and pair of wireless headphones to enjoy the movie and staff were on hand to sort out any tech issues with the headphones. This was the first silent cinema we’d been to and it was actually a really nice way to watch a film as you don’t get any unexpected disruptions. 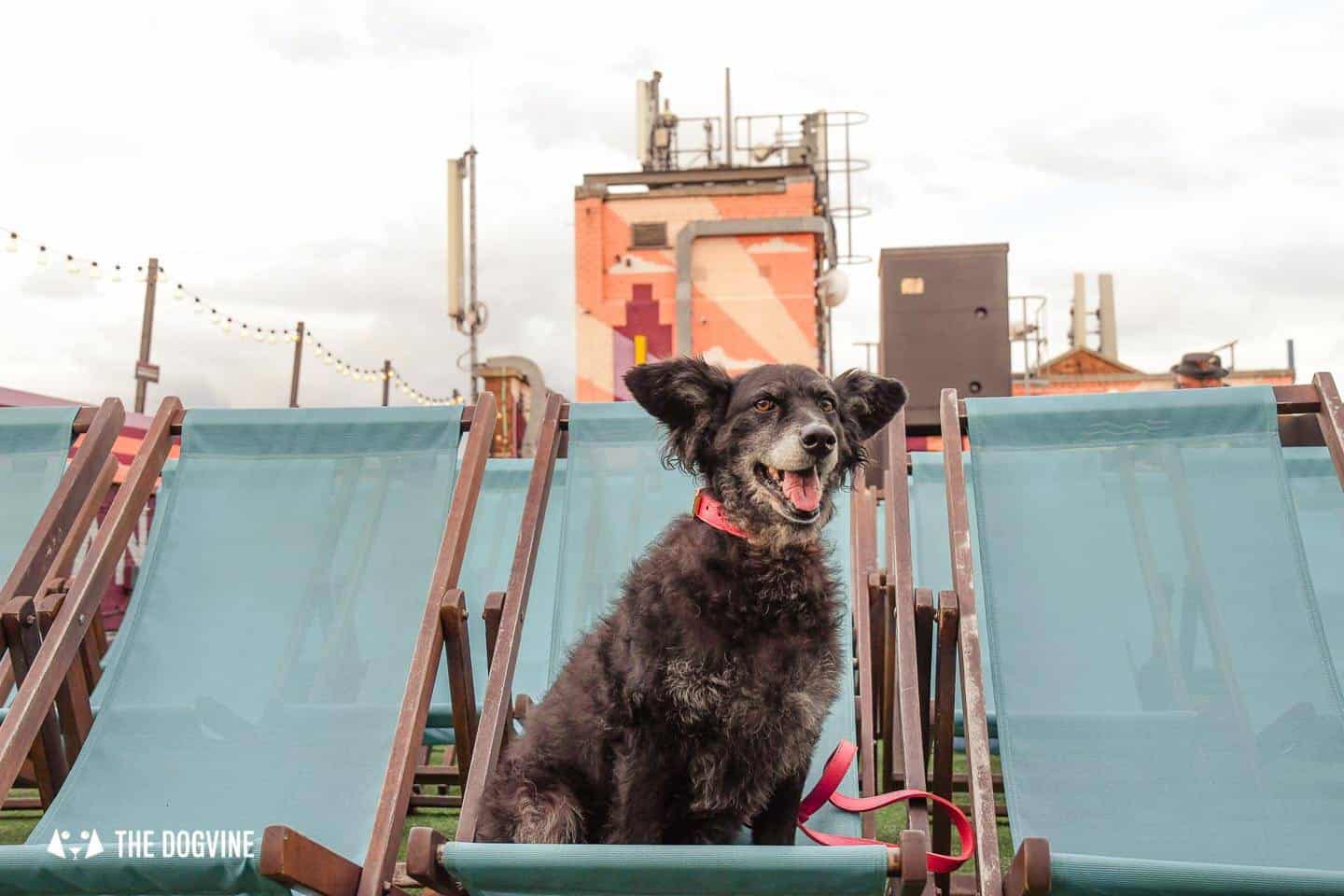 From a pup’s perspective, it’s great as there are no sound levels to be concerned about for sensitive doggy ears. Later on in the evening towards the end of the film it got a bit breezy so it was good to have the blankets to hand too. 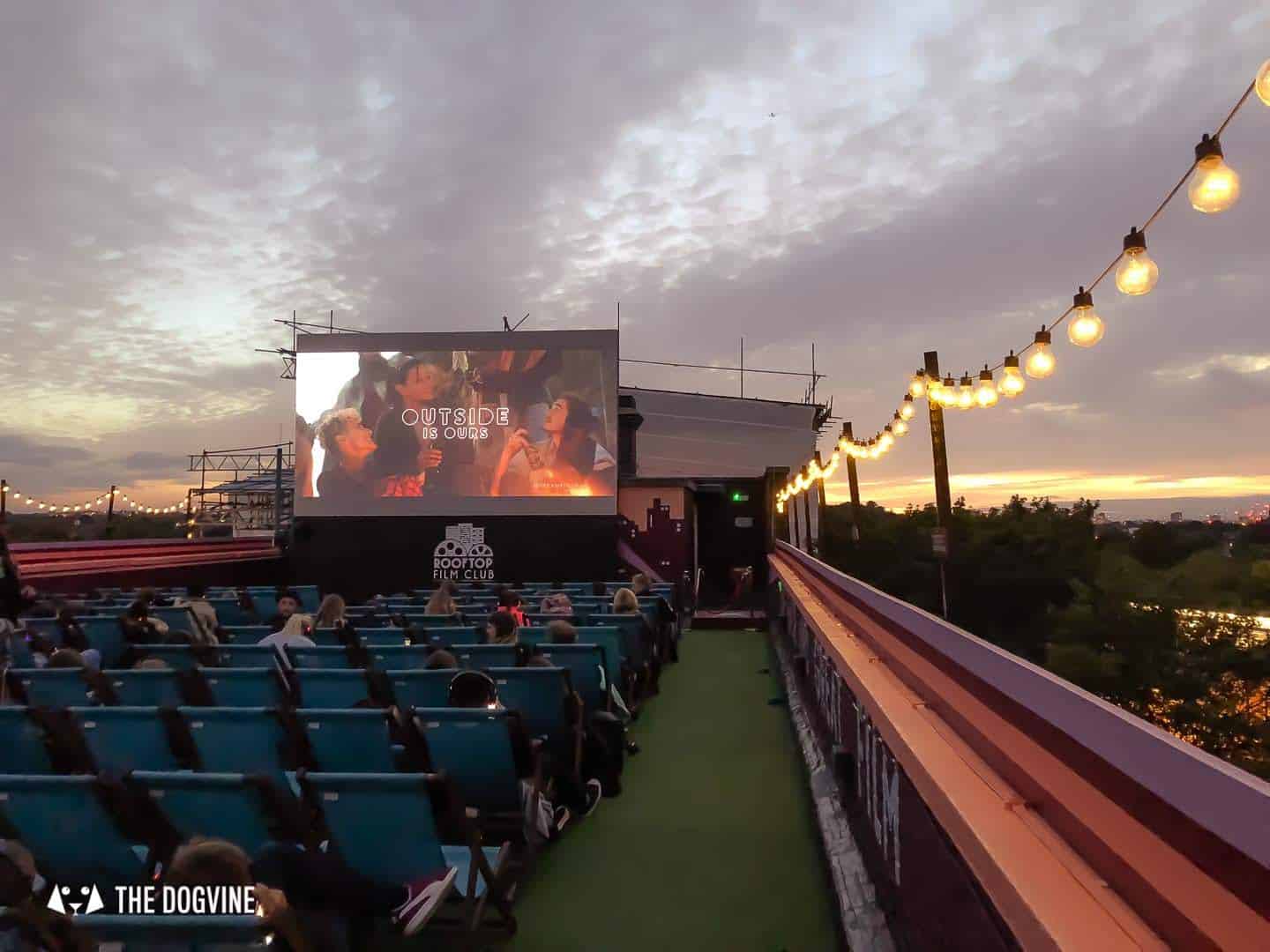 Those are practical elements of the experience but what’s hard to put into words is the almost magical feeling you get as you alternate between watching the film and watching the kaleidoscope of colours in the sky as the sun sets on London’s skyline. That is without a doubt hard to beat and is the most unique dog-friendly cinema experience we’ve had to date.

So was it a Paws Up for the Rooftop Film Club Peckham ?

Absolutely! As you may have gathered, our dog-friendly ‘Wooftop’ film club experience was surprisingly special, so if you love going to the cinema, then we reckon at least one visit to the dog-friendly Rooftop Film Club in Peckham with your pup should be on your Summer to-do list. And there’s still time to visit before the season ends on September 29th, details on how to book below. 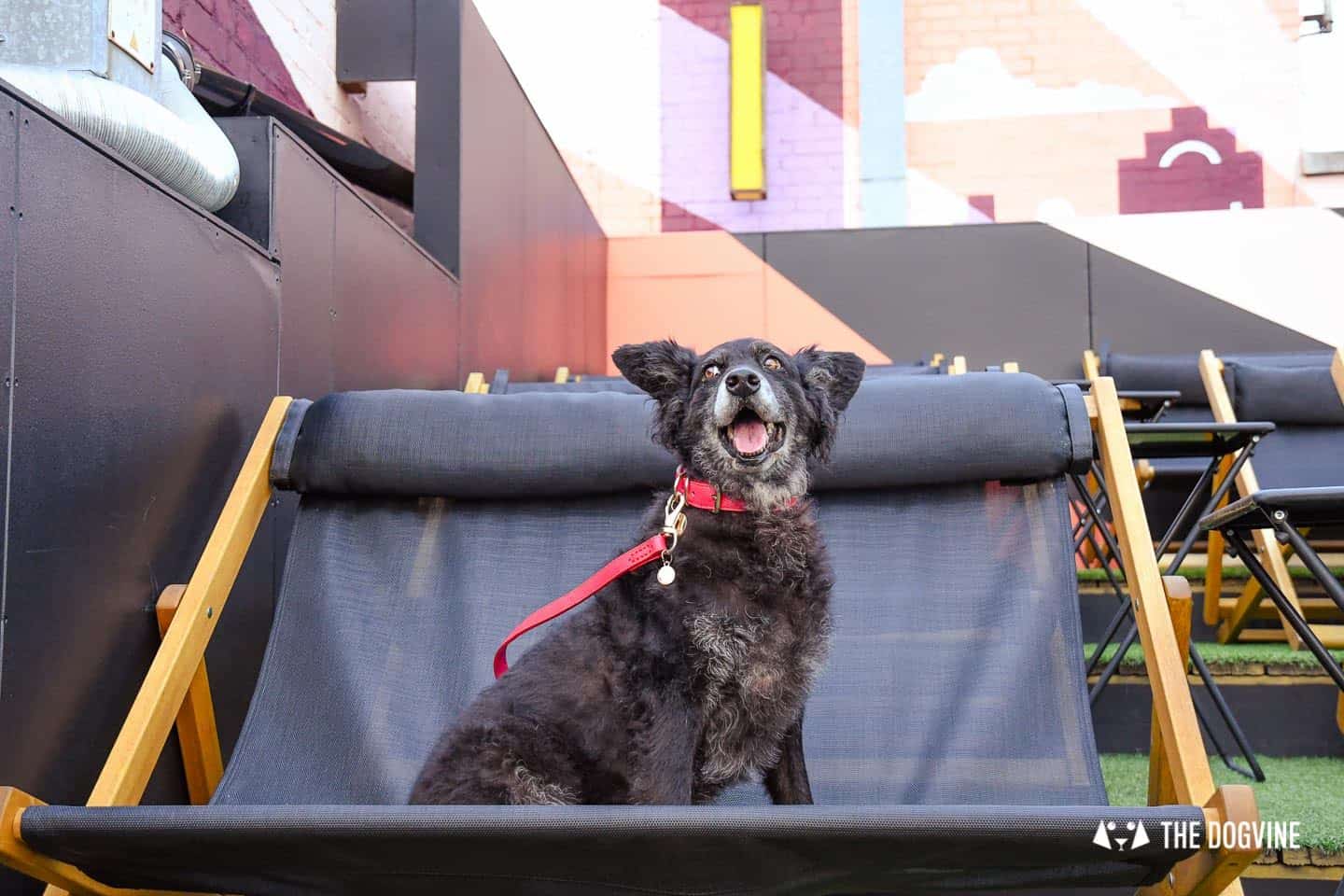 Getting There: The Rooftop Cinema Club Peckham is located at the Bussey Building, 133 Rye Ln, London, SE15 4ST, just a few minutes from Peckham Rye Station so easily accessible if you don’t have a car.

The Rooftop Film Club Box Office is open an hour before films start, so plenty of time to stop by the Bussey Rooftop Bar for drinks and food whilst the sun sets over London! 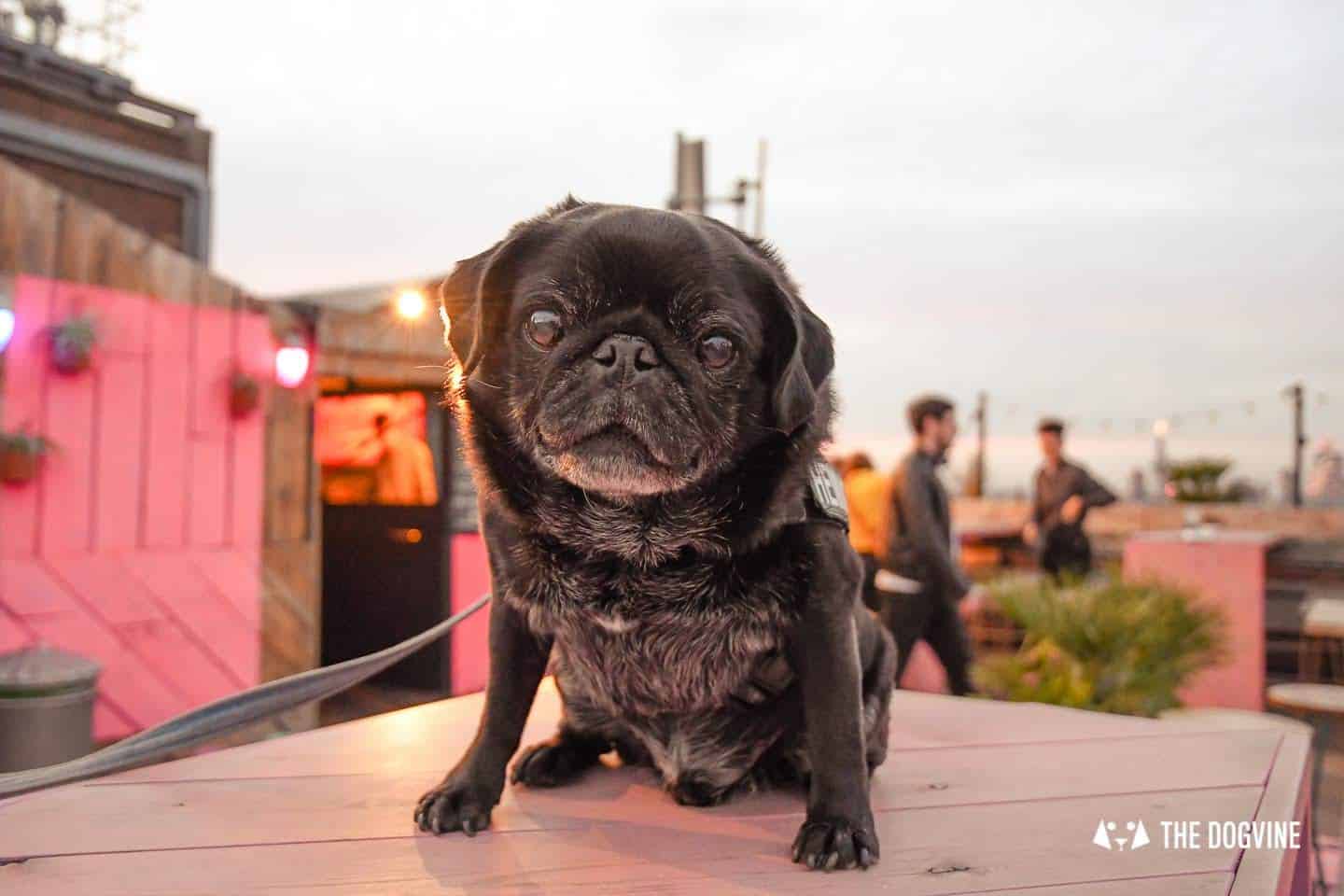 Although we received a complimentary visit to the Rooftop Film Club, it has not influenced this review as we give our genuine and honest opinion on all reviews.