Thousands of dogs are taking to the streets of London (and now Glasgow) to join the Wooferendum March and bark out against Brexit this weekend! Do you want to make sure your paw is on the PETition that demands the world’s first dog referendum? Then read on to find out all you need to know about the Wooferendum March this Sunday 7th October and see what some of our favourite London dogs have to say about it…

The Wooferendum March and Campaign

The Wooferendum campaign is the latest canine craze to sweep the UK and rightly so…why shouldn’t dogs have the chance to bark out about how Brexit will affect them too!

Wooferendum, a grassroots movement founded by journalist Daniel Elkan, has seen UK dogs join forces to demand a ‘Wooferendum’ to stop Brexit. Photos of dogs posing with ‘Stop Brexit #Wooferendum’ signs have been appearing all over social media and this coming weekend the dogs will take to the streets of Westminster too. 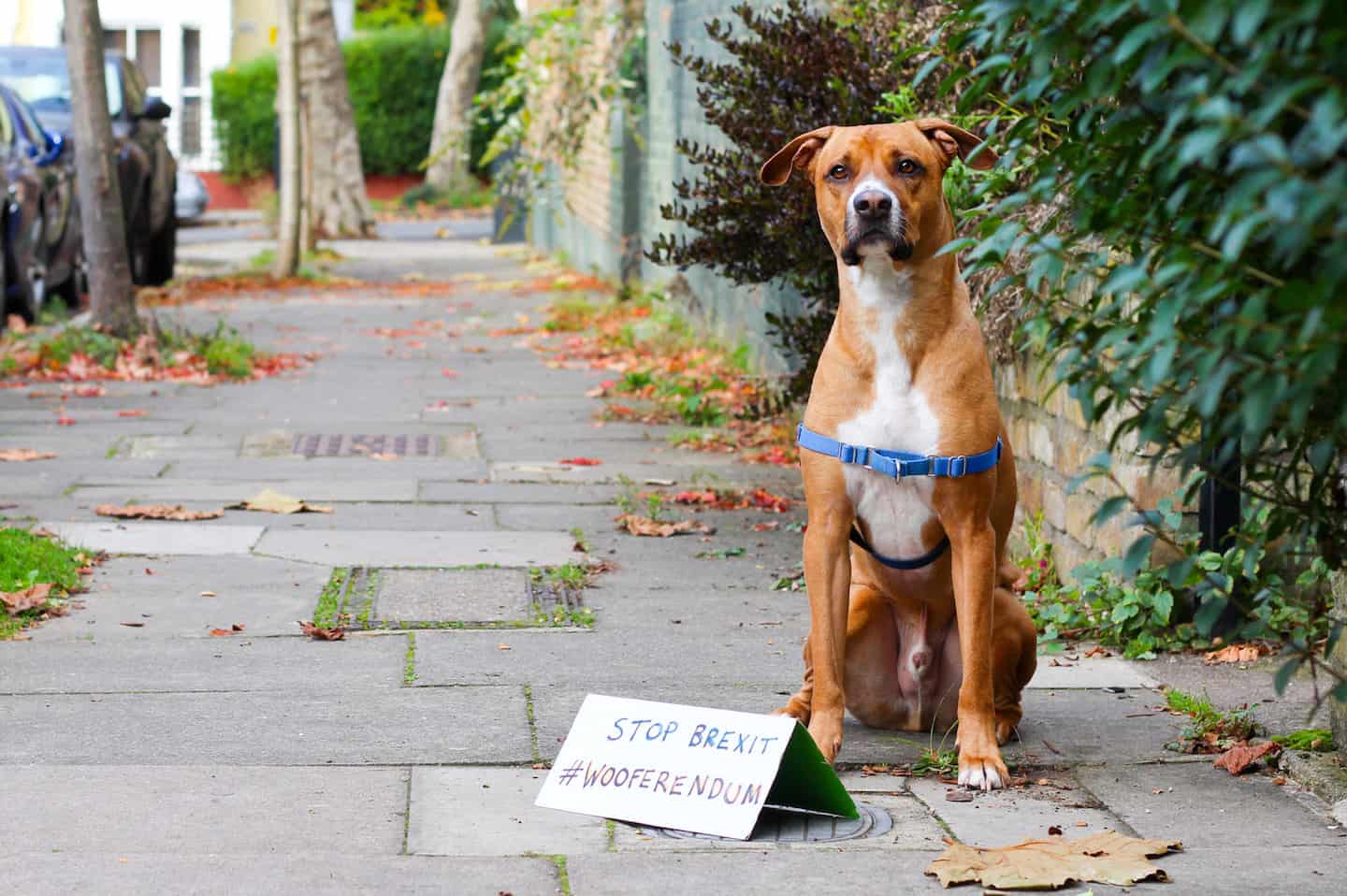 There’s even a film about it, with the four-legged stars being dogs of passers-by (and the help of a dog walking company who donated their services for the group shots), all who were more than happy to lend a paw to the campaign.

What do London Dogs think about the Wooferendum and Brexit?

We caught up with some of London’s dogs to see that they thought about the Wooferendum and Brexit in general. And don’t be fooled, they might be small but these London pups certainly have an opinion…

Pops Sausage is outraged…“I want to put Brexit in a poop bag and throw it in the bin!  I’m a liberal sausage and want all my pals from all over Europe to feel welcome.  My favourite treats are from a pet bakery In Paris, so I’m furious that Brexit could stop this!” 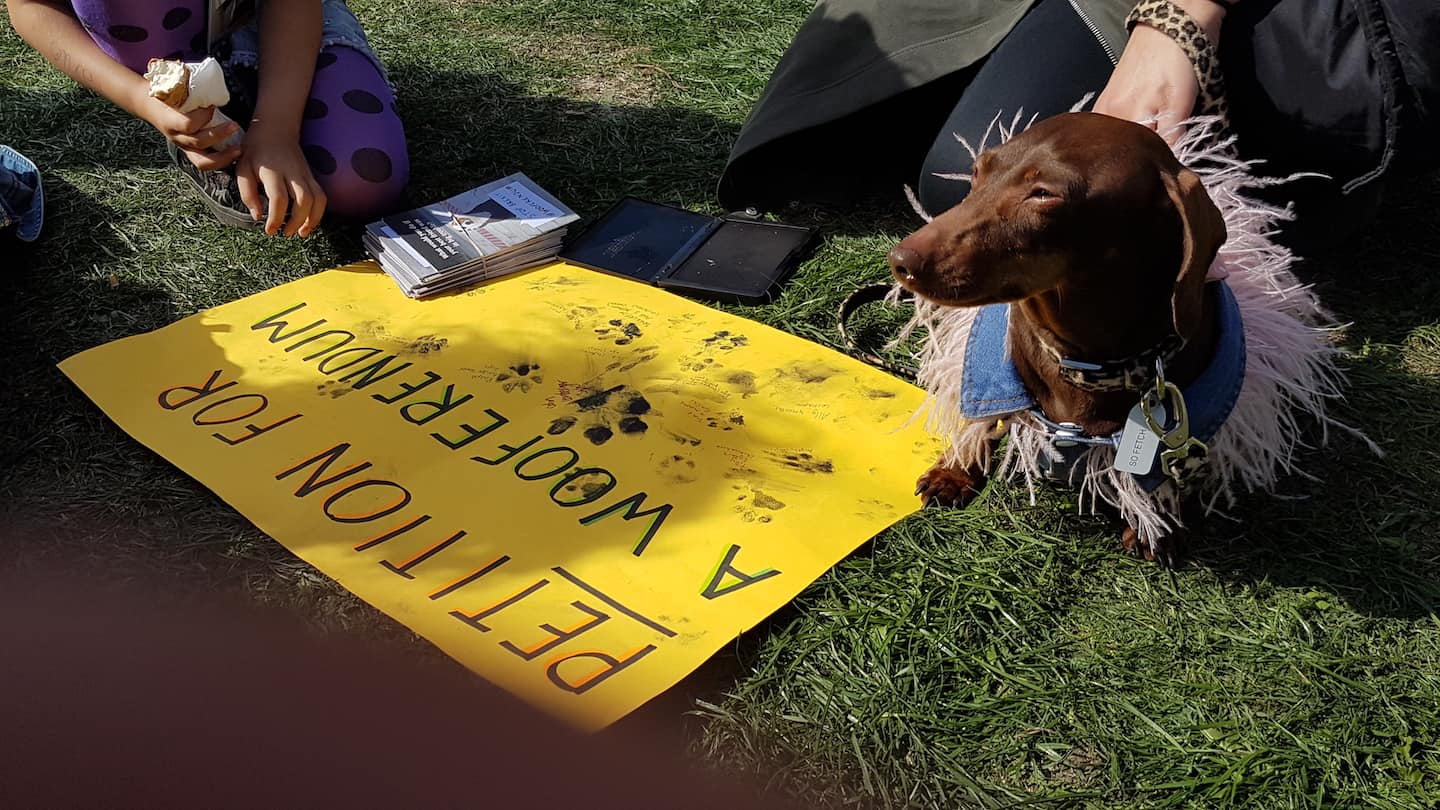 Daphne the WonderSossige is making sure her voice is heard…“I want to go on hollibobs to Europe without restriction, I want to still be furiends with my EU pals and I believe in diversity, equality and success…I WILL NOT BE MUZZLED”

What you need to know about the Wooferendum March

The pinnacle of the campaign will be the biggest four-legged march ever seen in the UK with an estimated 5,000 dogs and their humans set to march to Parliament to call for a People’s Vote on Brexit on this Sunday. A Wooferendum PETition signed by dogs will be delivered to Downing Street during the march too. 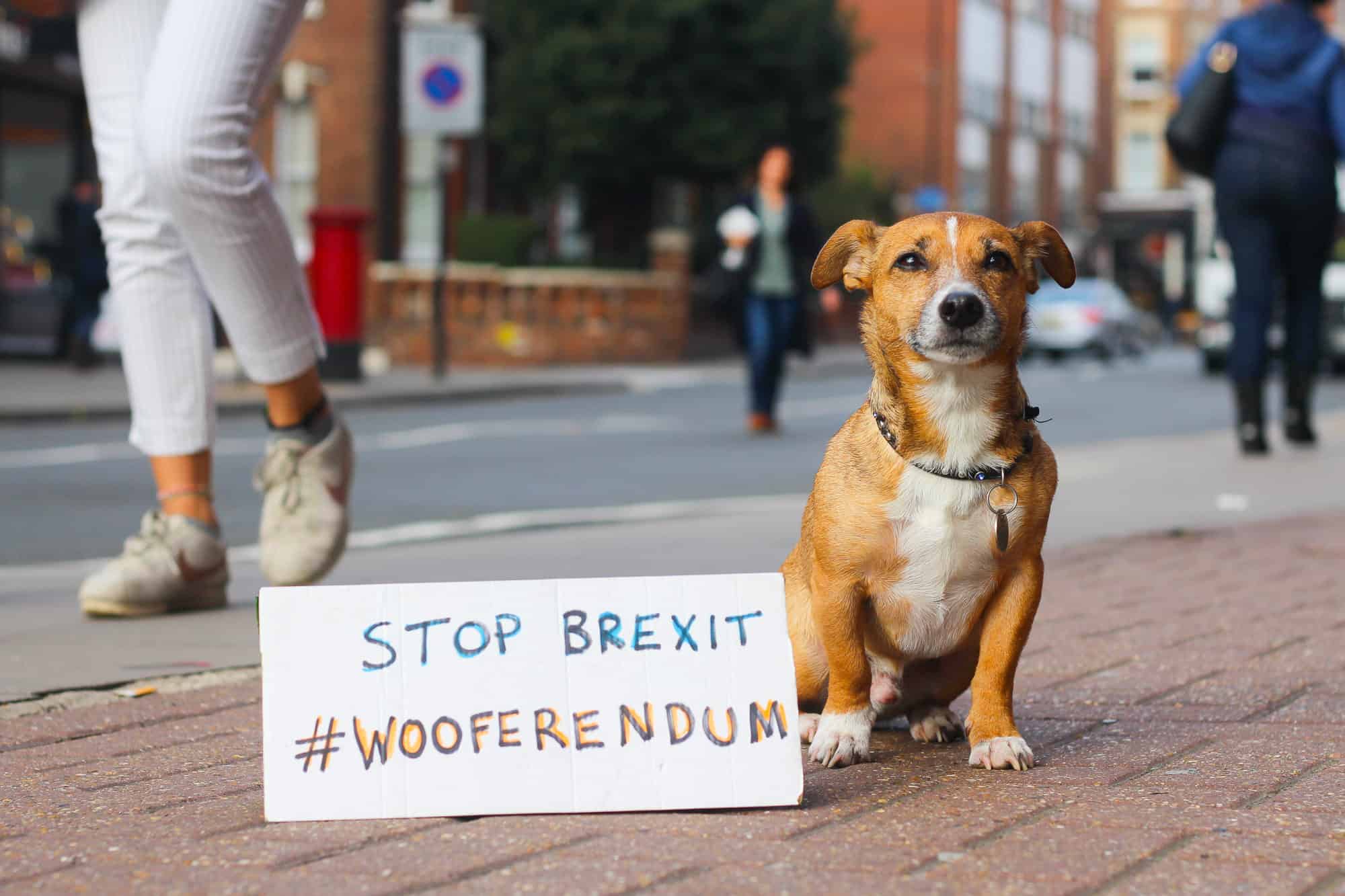 Dogs will gather for the Wooferendum March at 12pm at Waterloo Place, SW1Y 4BE. The march route then walks down Pall Mall, past Trafalgar Square, into Whitehall, past Downing Street and into Parliament Square, where a Wooferendum rally will be held.

“The enthusiasm for Wooferendum has been incredible,” says its founder, Daniel Elkan, who started the campaign personally by putting up posters on lamposts and bus stops many months ago. 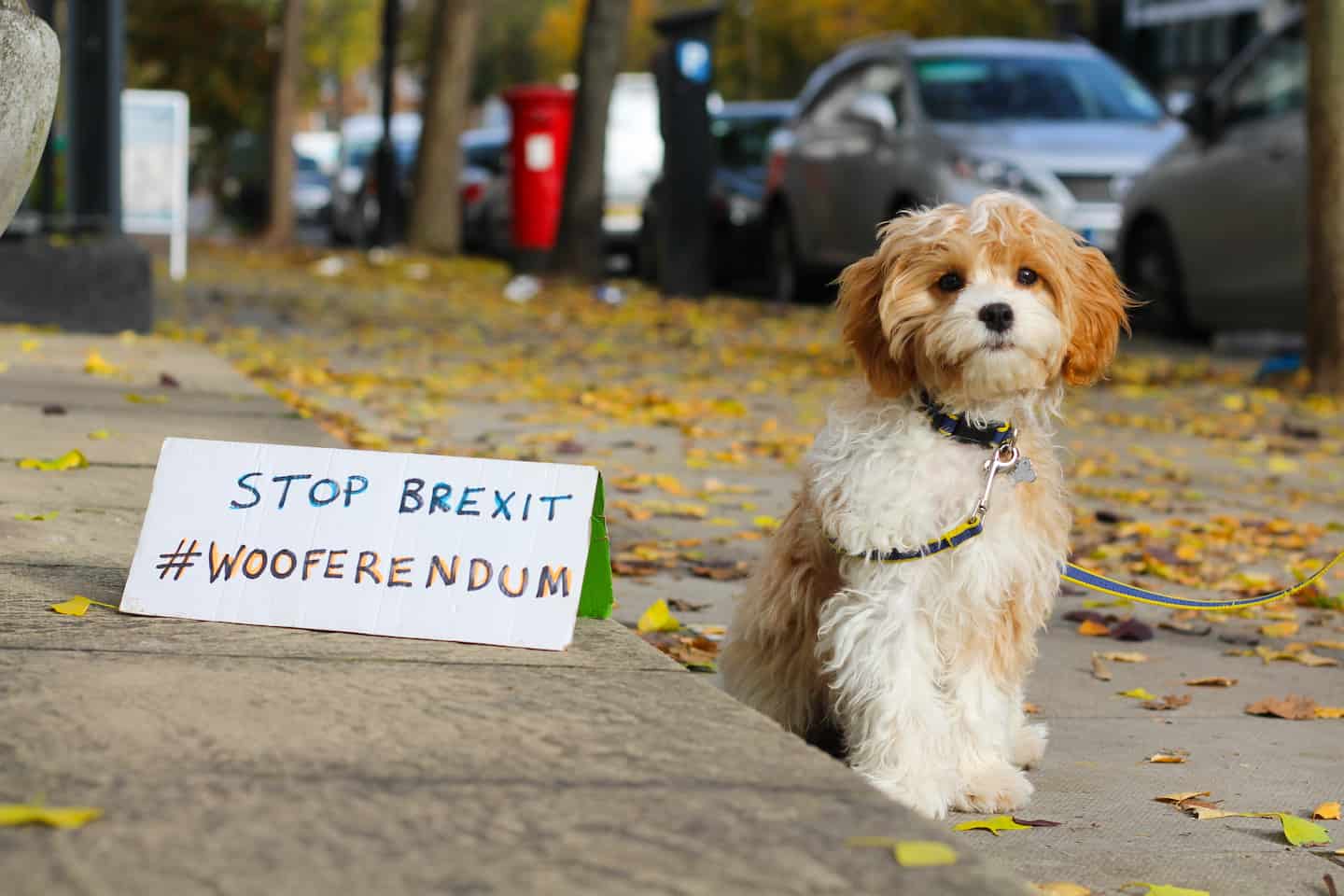 “People and dogs jump at the chance to express their feelings about Brexit, which is a tough topic, in a more friendly, engaging way. The movement is growing and the Wooferendum March on Sunday 7th October will be a fantastic day out.  We want to create the biggest bark in history – by the dogs, for the people. The campaign might seem barking mad – but it’s not as mad as Brexit.”

By popular (pet) demand, a Wooferendum March ‘Paws Brexit’ has just been announced in Glasgow too, more details here.

What Brexit means for Britain’s Pets 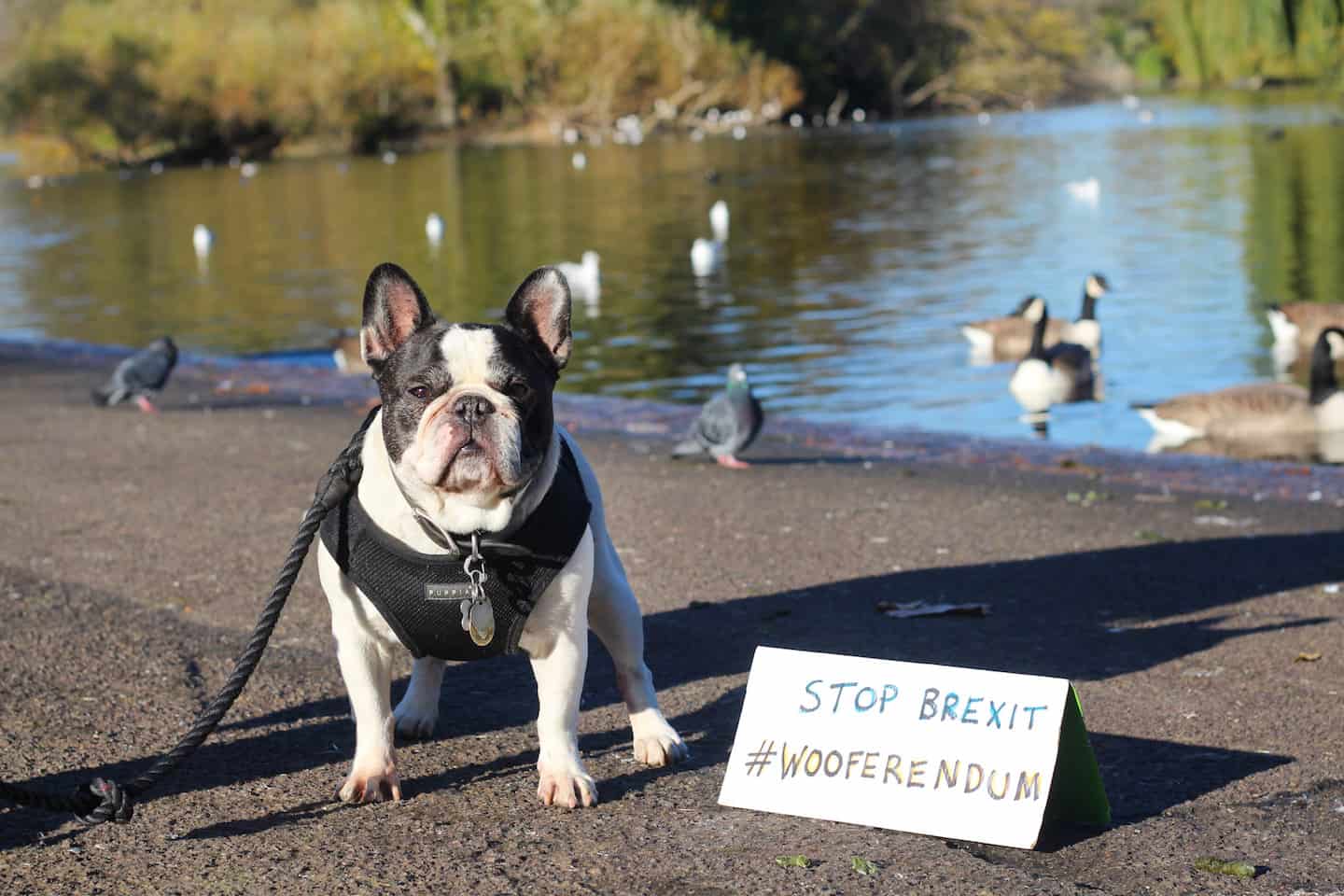 At first glance, the Wooferendum March may seem to some a bit barking. But Brexit is no joke for Britain’s pets as it could have disastrous effects on their welfare.

Wooferendum research shows that  “around half the vets starting work as vets in the UK each year are from non-UK EU countries and non-UK EU vets make up around 25% of the overall number of vets in the UK. A recent report from the Royal College of Veterinary Surgeons has found that Brexit could result in a major barrier to qualified vets from the EU working in Britain.  This shortage of qualified labour in veterinary surgeries across Britain could jeopardise animal welfare as well as public health.”

Dominic Dyer, a leading animal welfare campaigner and one of the organisers of the Wooferendum March says “We know Brexit will be disastrous for the people of Britain but it could also be equally bad for our pets. From a shortage of skilled vets and vet nurses, to rising costs for animal health and pet food products and even the end of the EU pet passport scheme, Brexit will be disastrous for the nations dogs and cats and other companion animals. If Brexit causes another recession on the scale of the financial crash of 2008, we can expect to see plunging living standards, forcing many people to give up their pets, leaving charities and shelters struggling to cope with the influx of animals in need of new homes.”

Do we want any of that? Of course not! And we’re not the only ones as it seems some pups who might have originally been pro Brexit are having second thoughts…

This is Claude and Vicky. Claude is a bit nervous of strangers so voted Brexit. He has now realised his essential medicines, his vets and even his dog food might be in short supply with No Deal. Is too late to change his mind? #Wooferendum pic.twitter.com/wLl1tLMacI

The government recently announced their latest thinking on what Brexit means for pets in the event of a ‘no deal’ scenario which does not sound promising. Read all about it here.

Incredibly this all started with an idea from one man, Daniel Elkan but now thousands of humans and hounds are backing the canine campaign.

A crowdfunding page has been created to raise money for the Wooferendum campaign and to promote the initiative. By donating you can get your paws on some on point perks from UK’s much-loved pet brands such as Ellery Bow and the hilarious ‘pawlitical’ Pet Hates Toys.

So if like most pups it seems, you think Brexit is barking, get your human down to Waterloo Place on Sunday to leave your paw print on history and join this monumental event for dogs.

Which slogan is your favourite for our #Wooferendum rosettes for the march on 7 October?

Bring your dog & join the @Wooferendum 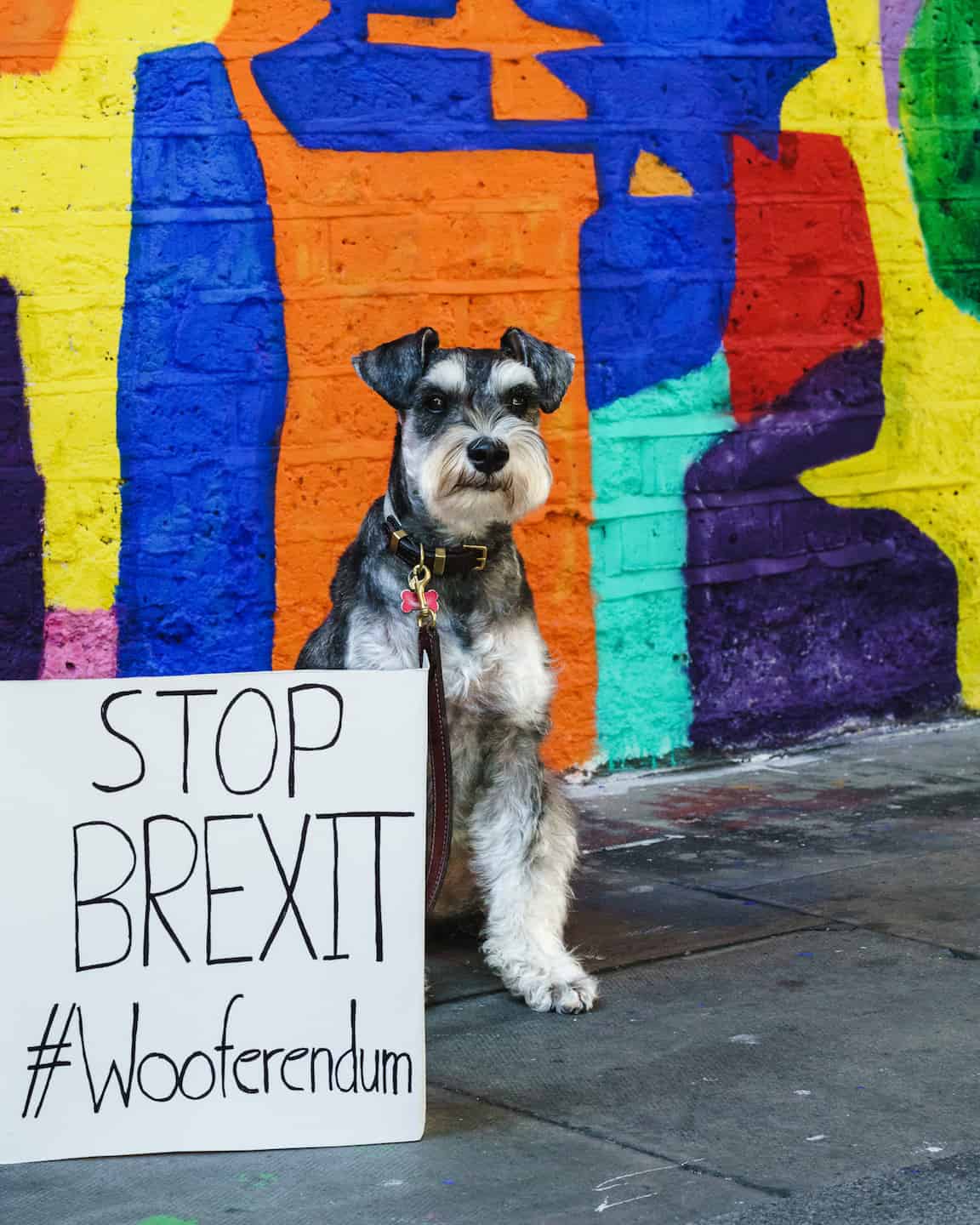 We’ll see you there! #Wooferendum

TO STAY UP TO DATE WITH WHAT’S ON FOR LONDON DOGS, CHECK OUT OUR LONDON DOG EVENTS CALENDAR

Photos unless otherwise credited courtesy of the Daniel Elkan and the Wooferendum Campaign.