Not only is Ruislip an ‘unexpected’ place to find a dog beach in London, but it’s also the only dog beach you’ll find that’s still technically in London. We say technically as you do need to go as far as Zone 6 on the Metropolitan or Piccadilly lines to get there but you are still in London. Having been on our list to visit for a long time now, we decided to go on a busy Bank Holiday weekend which is probably not the greatest idea we’ve had. So here are our tips and honest take on how to enjoy a visit to Ruislip Lido Dog Beach, especially when the sun is shining and everybody has the same idea to hit the beach. 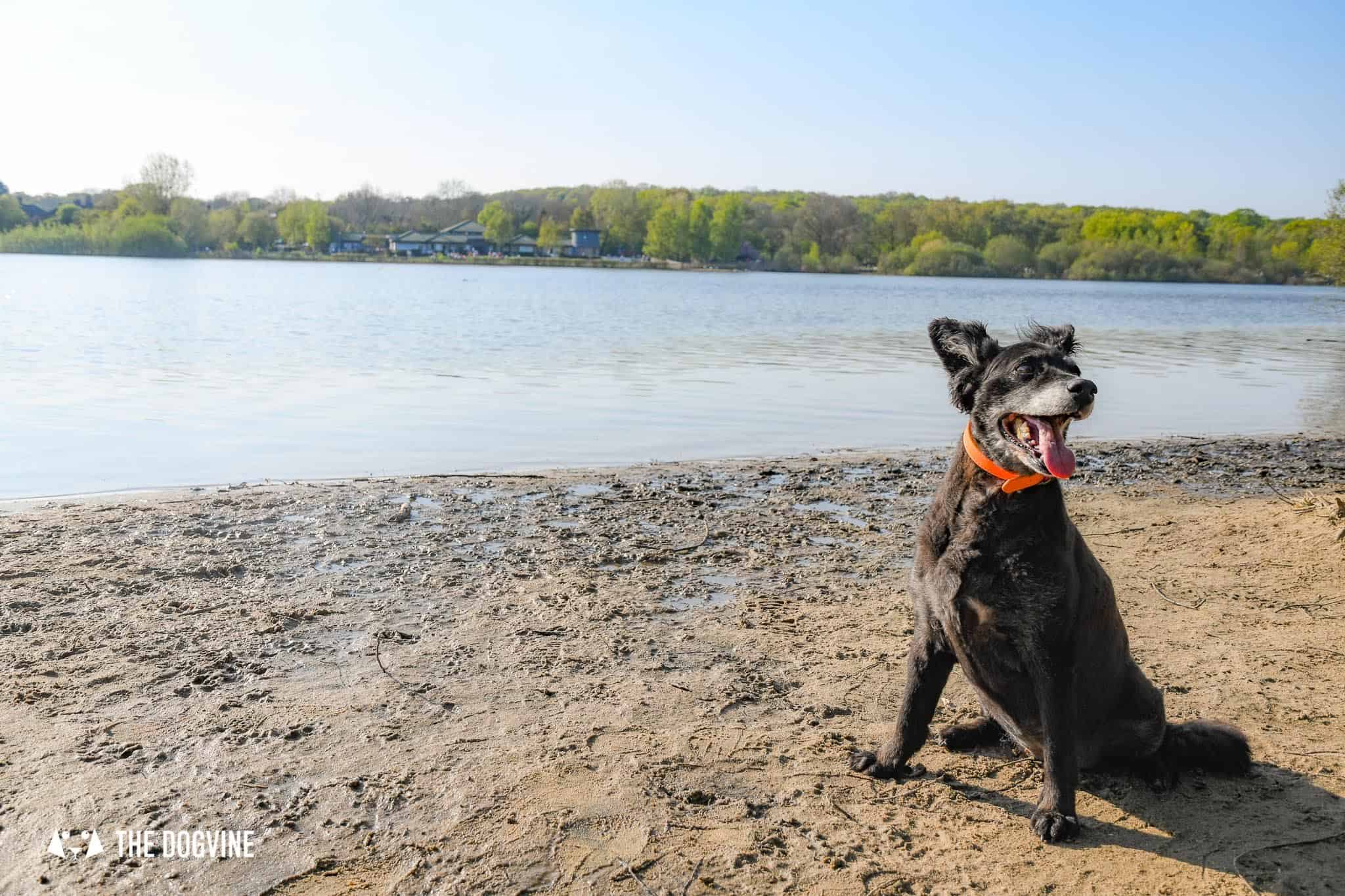 Ruislip Lido is actually a 60-acre lake on the edge of Ruislip woods (in the borough of Hillingdon) with unique sandy beaches that make it a definite London attraction. Ruislip Lido is first and foremost a reservoir dating back to 1811 but since 1933, has operated as an outdoor Lido. Over the years, it is has had its ups and downs but after a regeneration project in 2010, re-opened and now has a separate beach for both humans and hounds. Today, it has become a favourite for locals and Londoners from further afield looking for a beach day out. We should point out that although people can enjoy the beach, swimming is actually not permitted in the Lido itself due to various health and safety hazards (see signs below) and no lifeguards being present at the Lido. 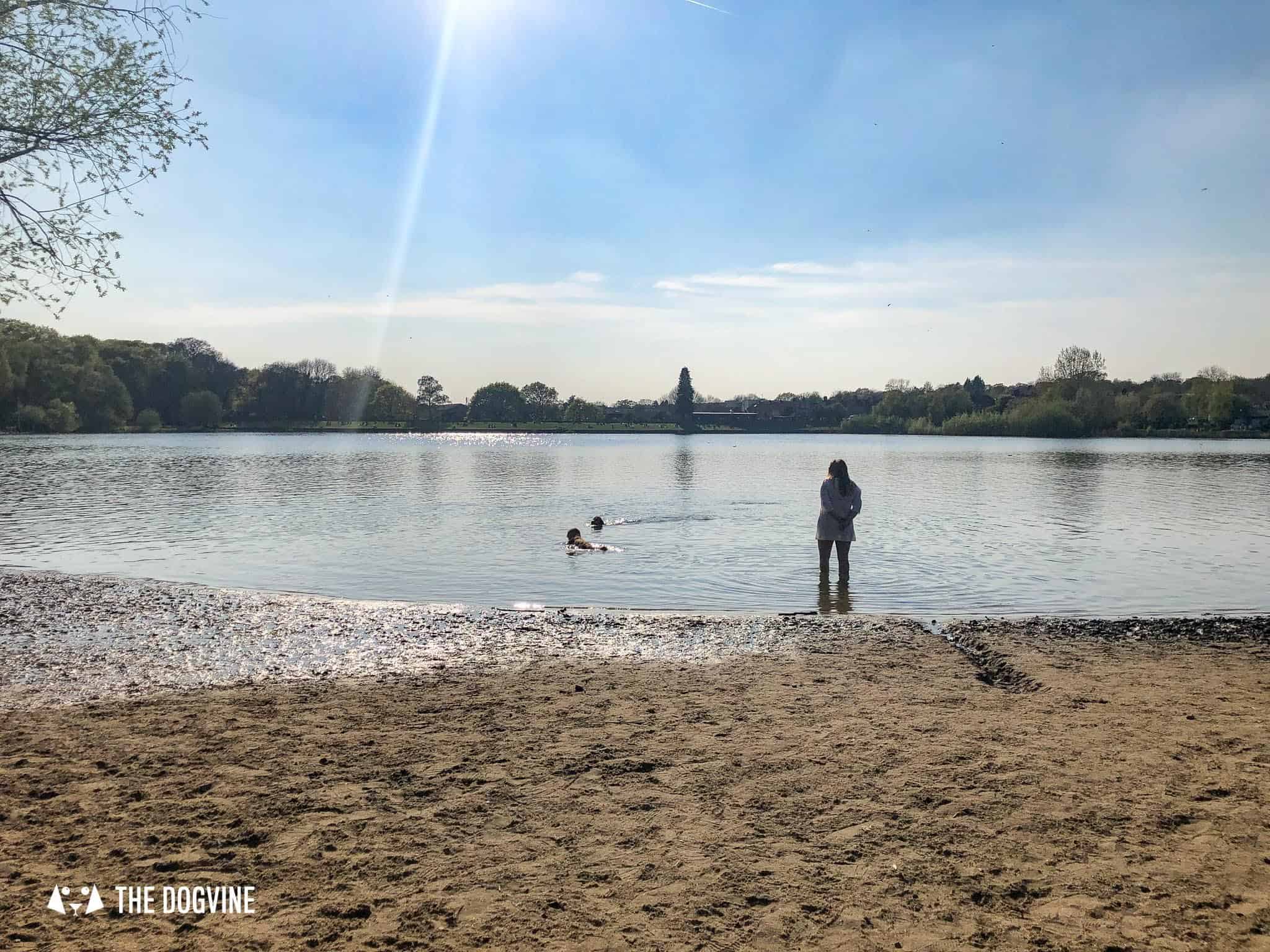 It’s not all about the Lido or beach either, with woods covering 700+ acres, Ruislip woods is one of the largest woodland areas in Greater London so plenty of opportunities for long walks and some would say, this could even be the best part. 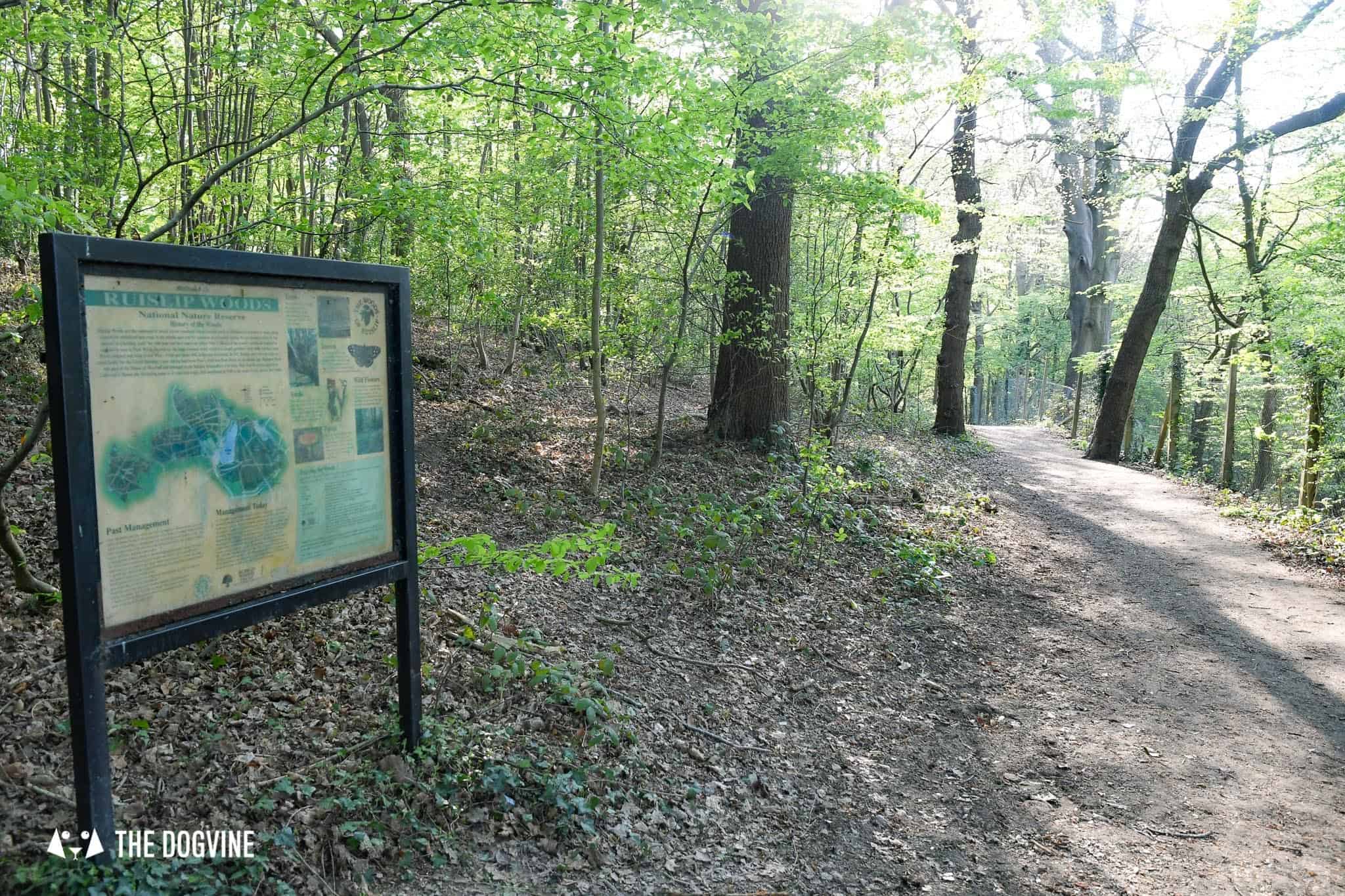 As mentioned previously, we probably didn’t choose the best day to visit – on a sunny Bank Holiday Monday when everybody had the same idea of going to the beach. We went by car and by the time we got there in the early afternoon there was no chance of getting a space in the car park which actually turned out to be for the best. After finding a place to park on one of the side roads (we found free parking on Bury Avenue which you can see on the map later in this post), to get to the Lido we decided to take the woodland path next to Hillingdon Athletic Club. This took us through the woods bringing us out close to the main beaches area and bypassing the car and human traffic jams we would have encountered if we had come via the main entrance next to the Water’s Edge Carvery. 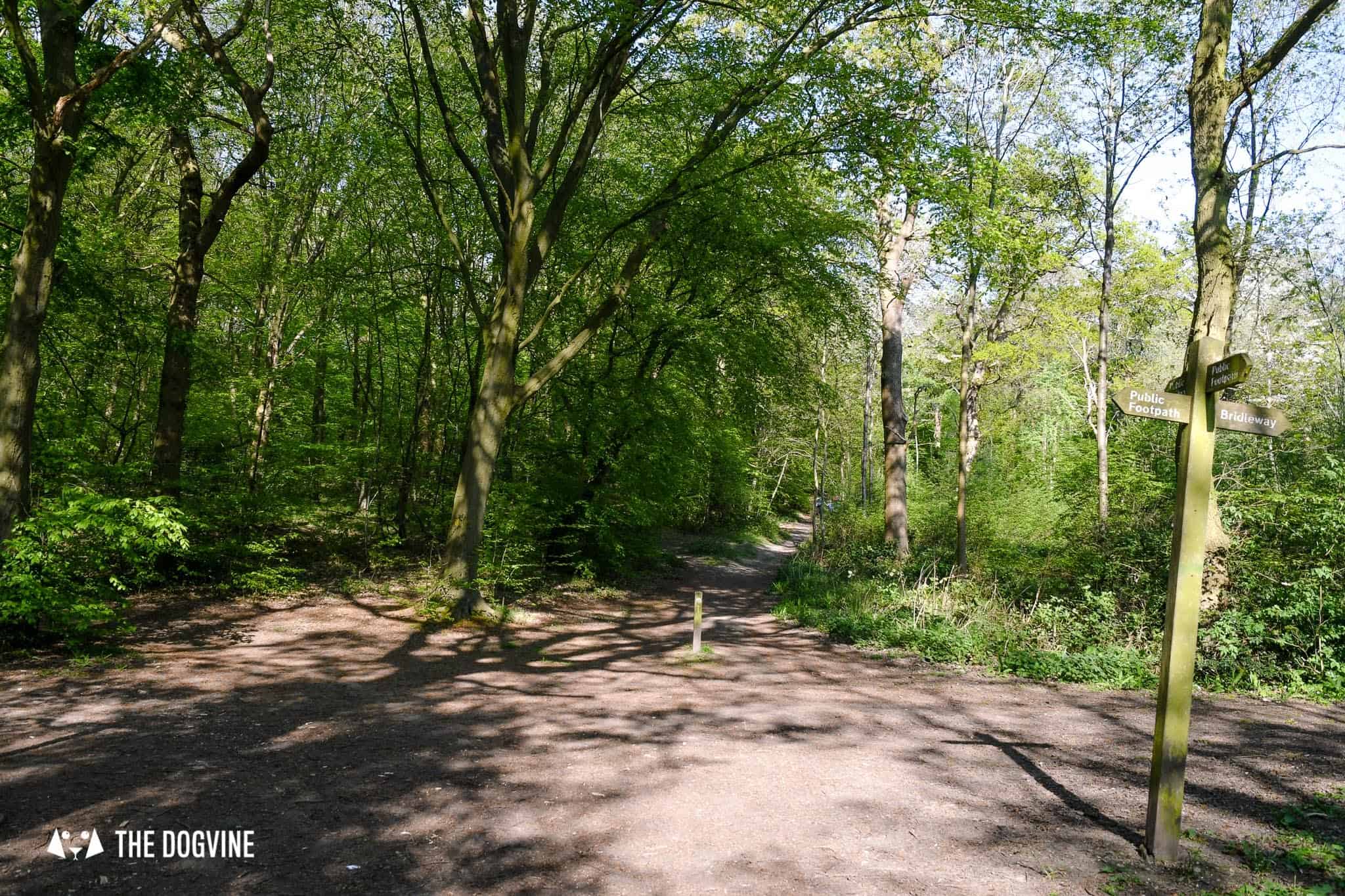 Our first impression was of crowds, crowds and more crowds! At this point increasingly more convinced that we hadn’t made the best decision to come, we continued past the main Lido beach area – dogs must be on a lead here, past the café until we found the Ruislip dog beach, which is behind a fence past the main beach and the area where dogs can go off lead. 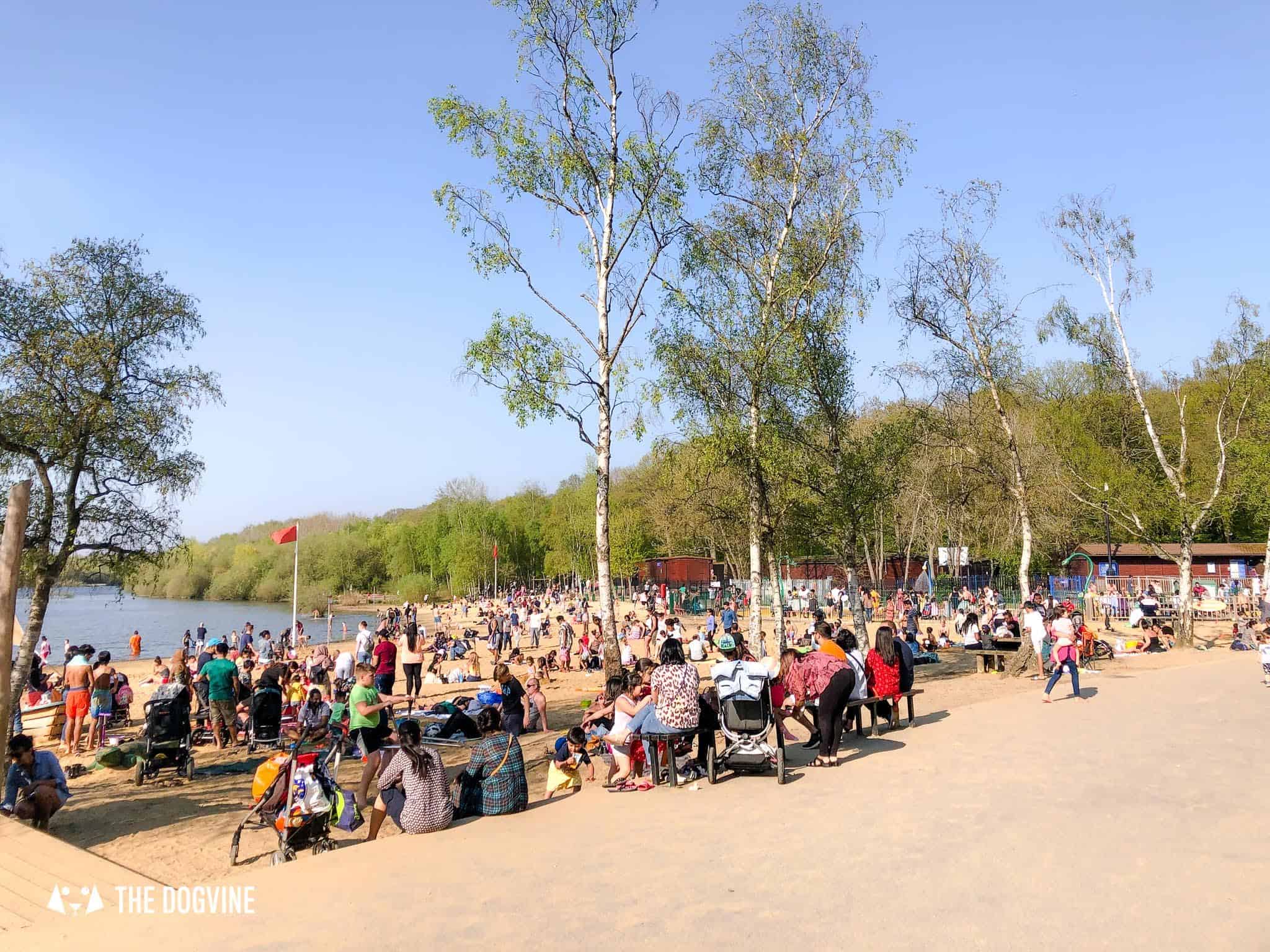 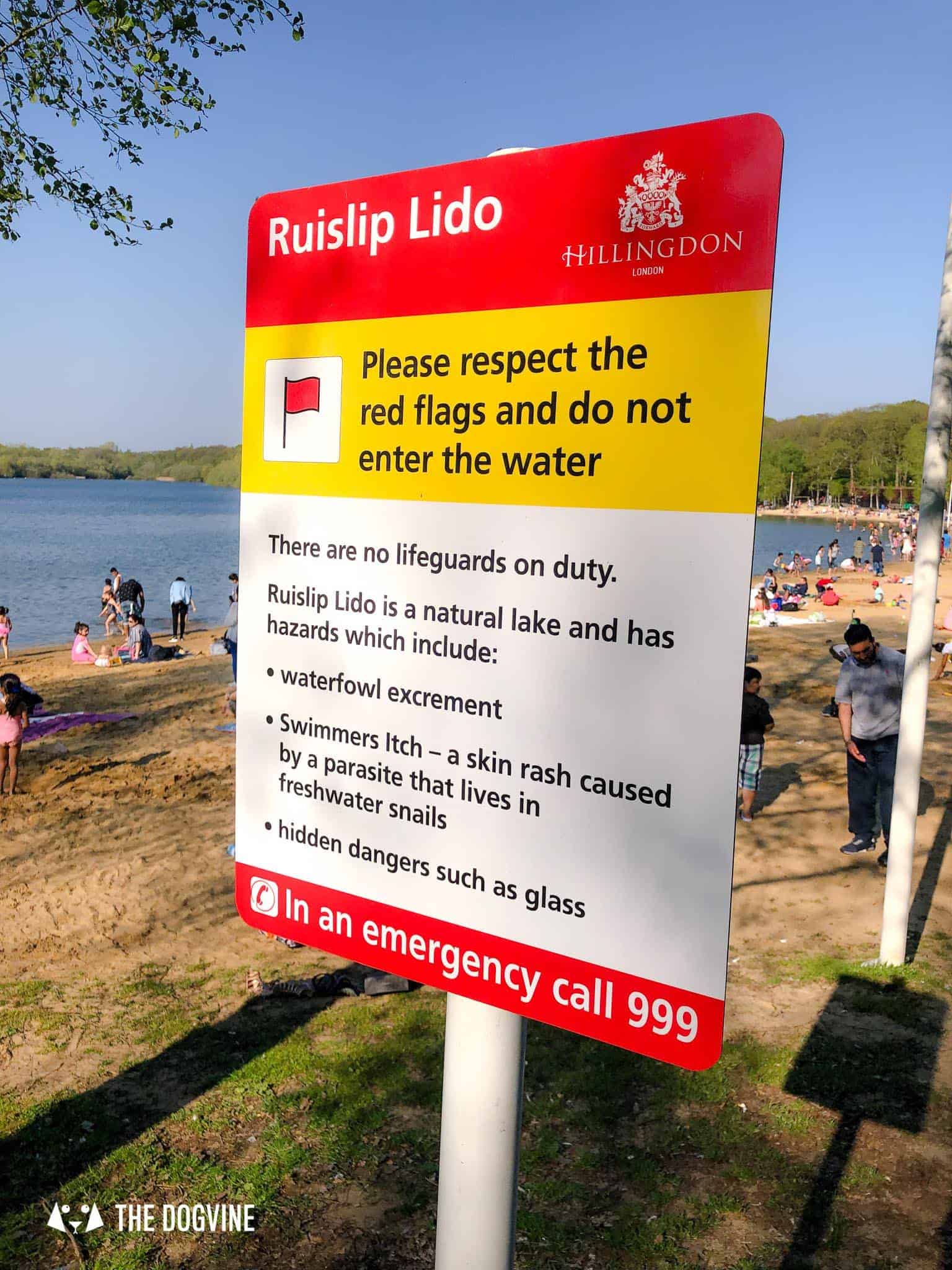 Surprisingly, despite the human beach being busy when we got to the dog beach it wasn’t busy apart from one or two other dogs enjoying a swim and a play on the sand. 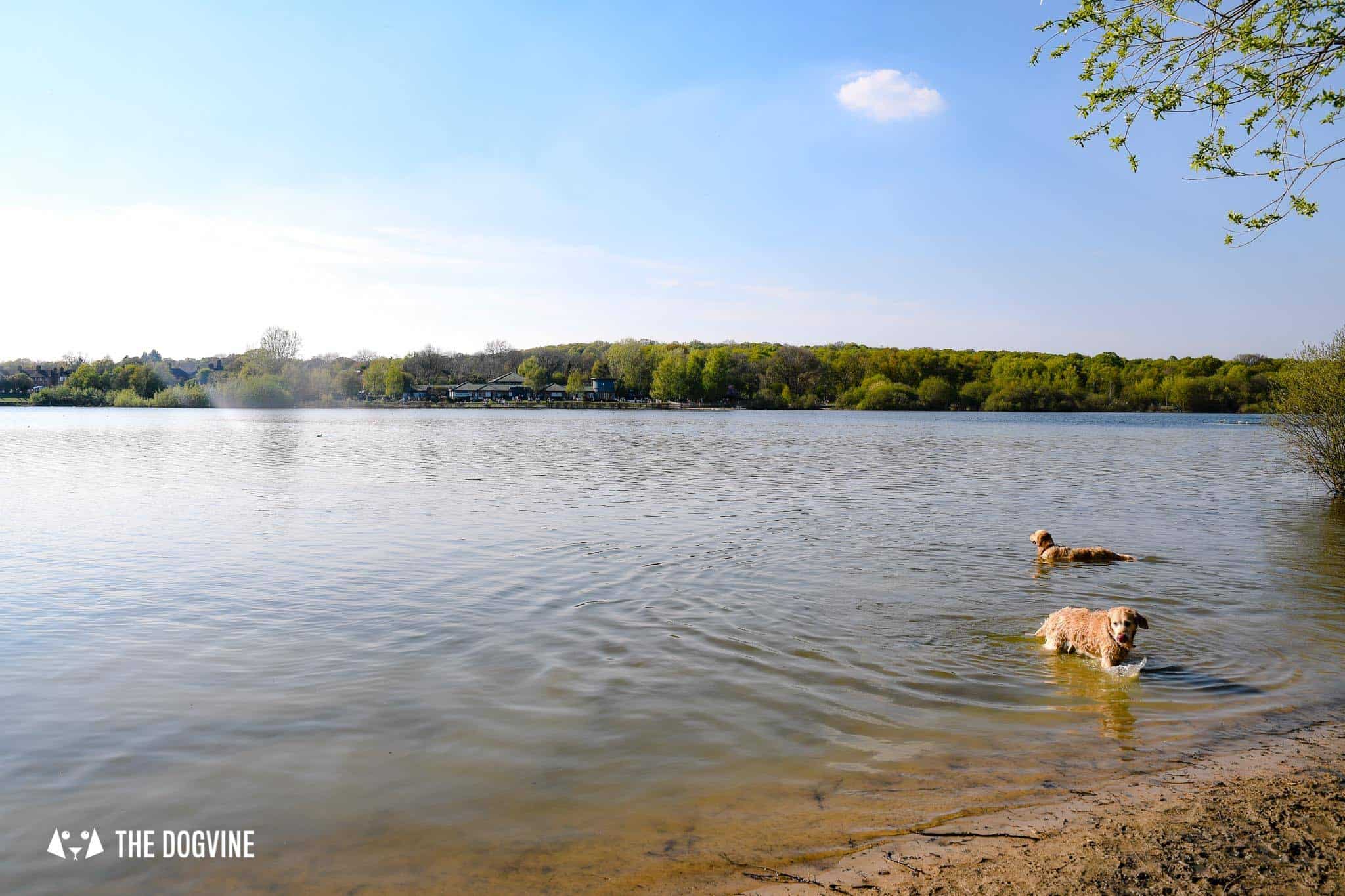 The dog beach is not a large area but it’s big enough for dogs to have a good time. Compared to the main beach area, it’s less sandy but surprisingly peaceful – we even met some humans without dogs who said they regularly choose to come to that part of the beach to sunbathe despite not owning a dog as it’s so much quieter. 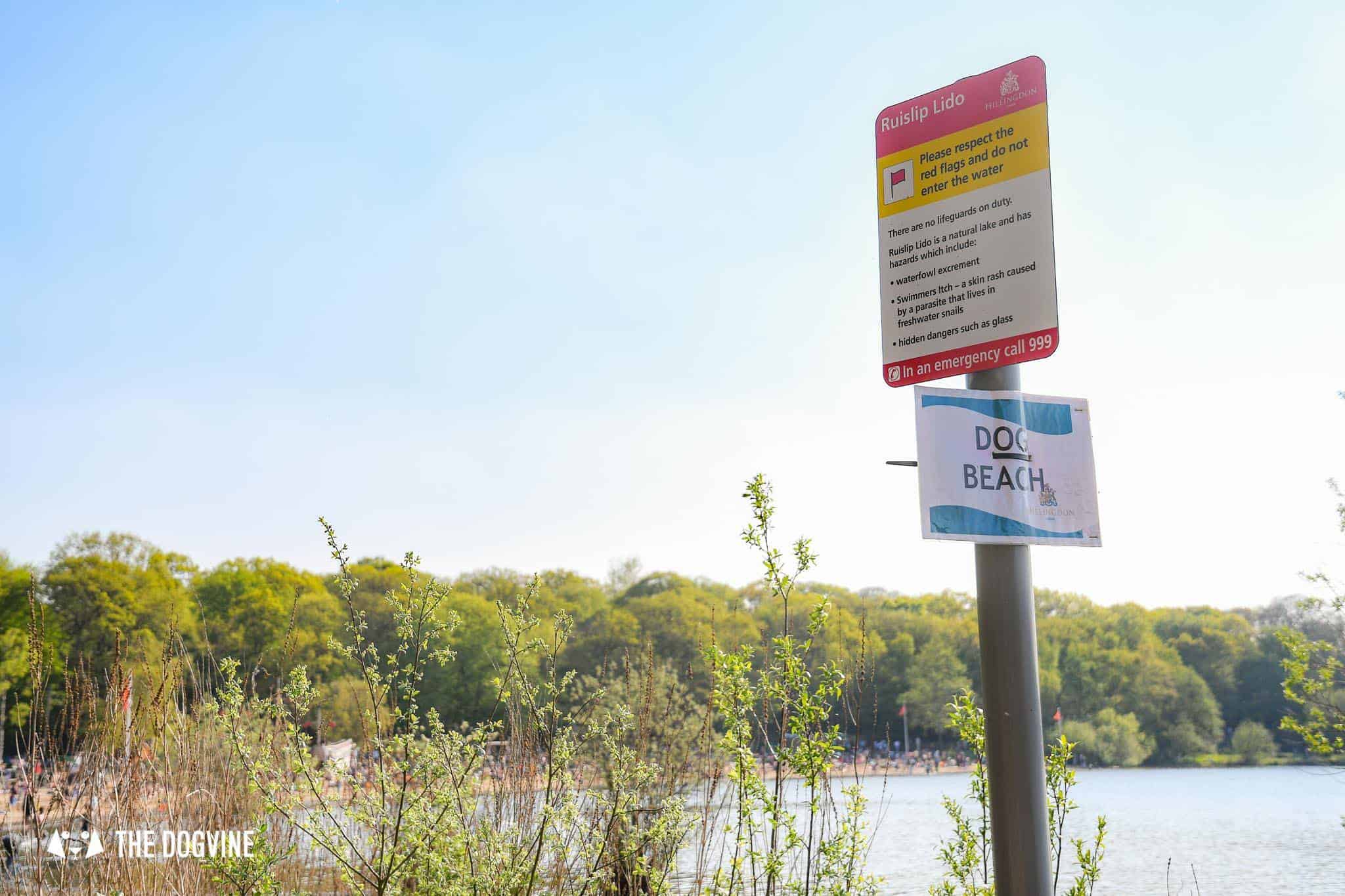 We did see the same signs we had seen earlier on the main beach regarding swimming. 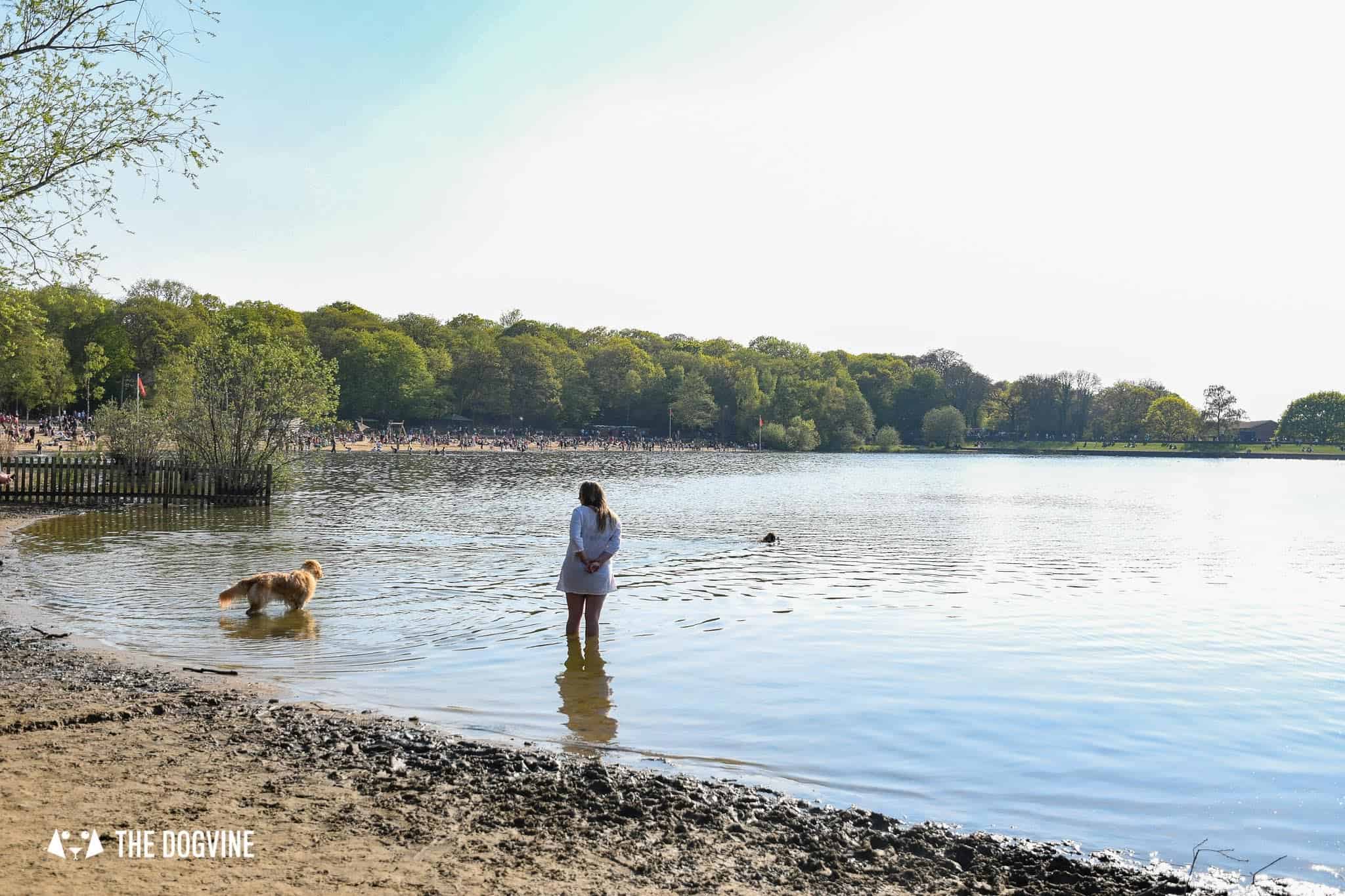 As usual, Belinha defied her Brazilian roots and didn’t want to go near the water but was happy to enjoy the sand a safe distance away. 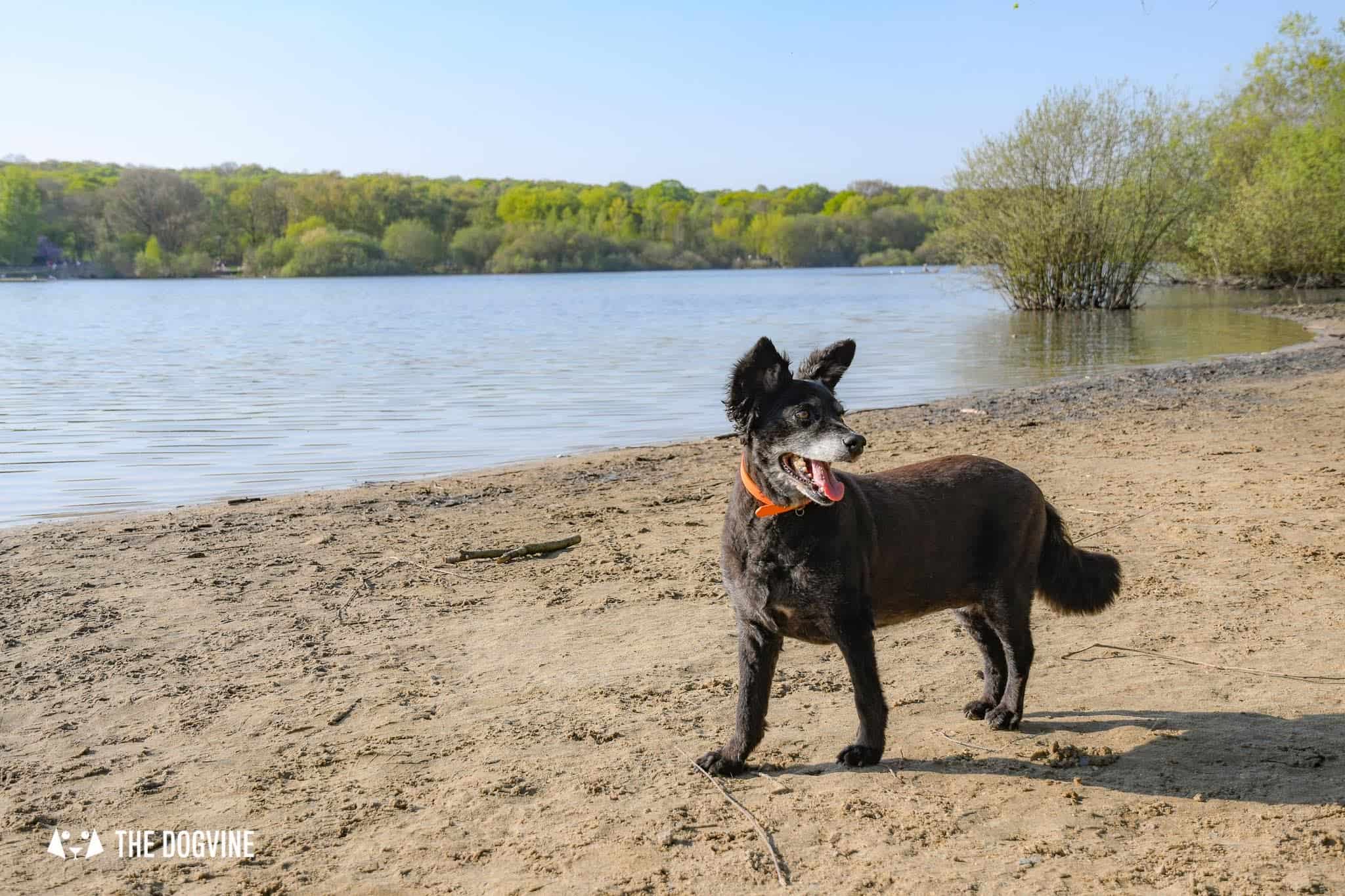 And if you just want to hang out for a while but not in the sun, there are plenty of trees for shady areas at the back of the sandy area on the beach. 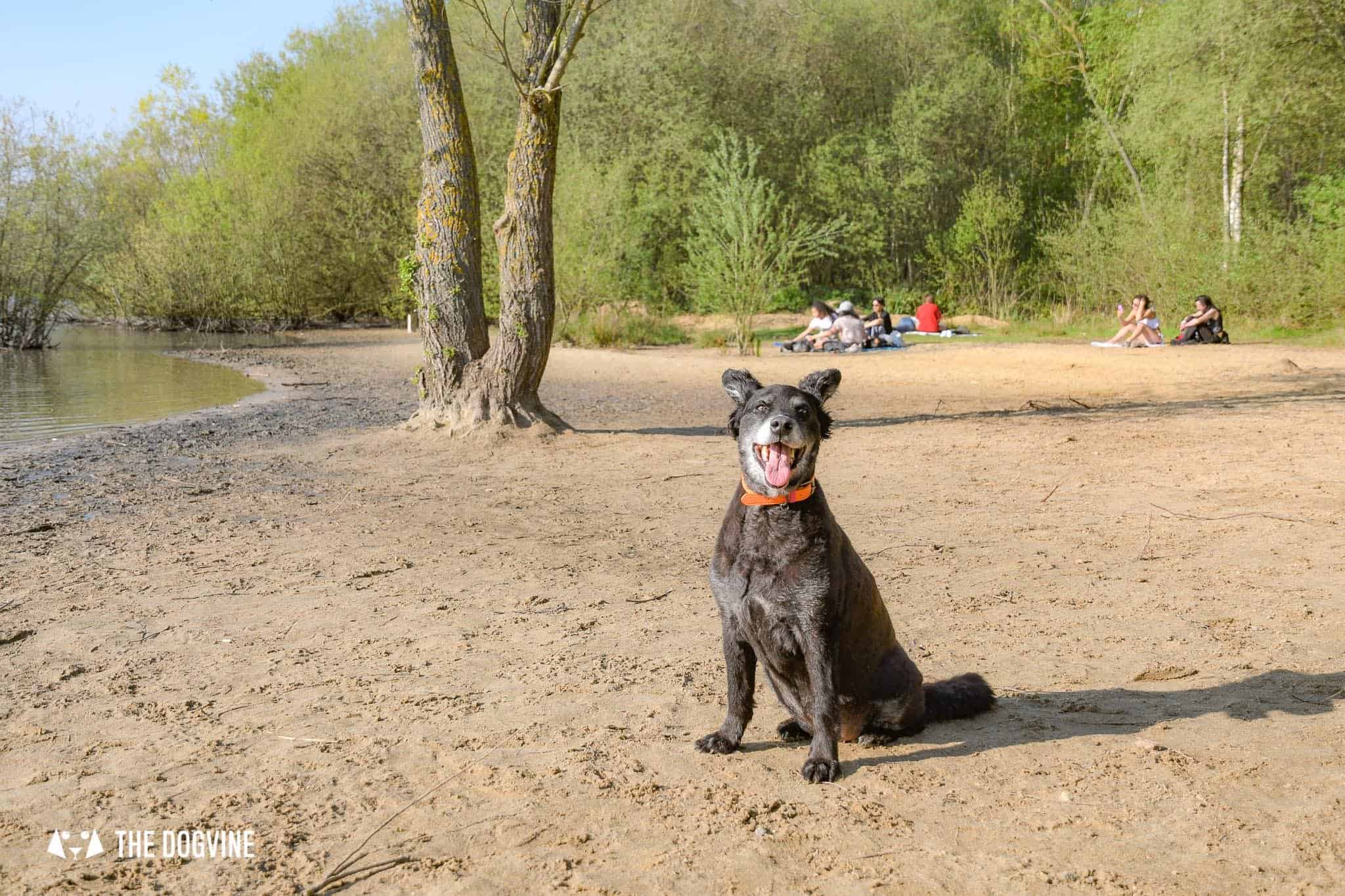 After our initial introduction to the busy Ruislip Lido main beach, I can honestly say that the Ruislip dog beach was a pleasant surprise where we spent a peaceful hour or so. 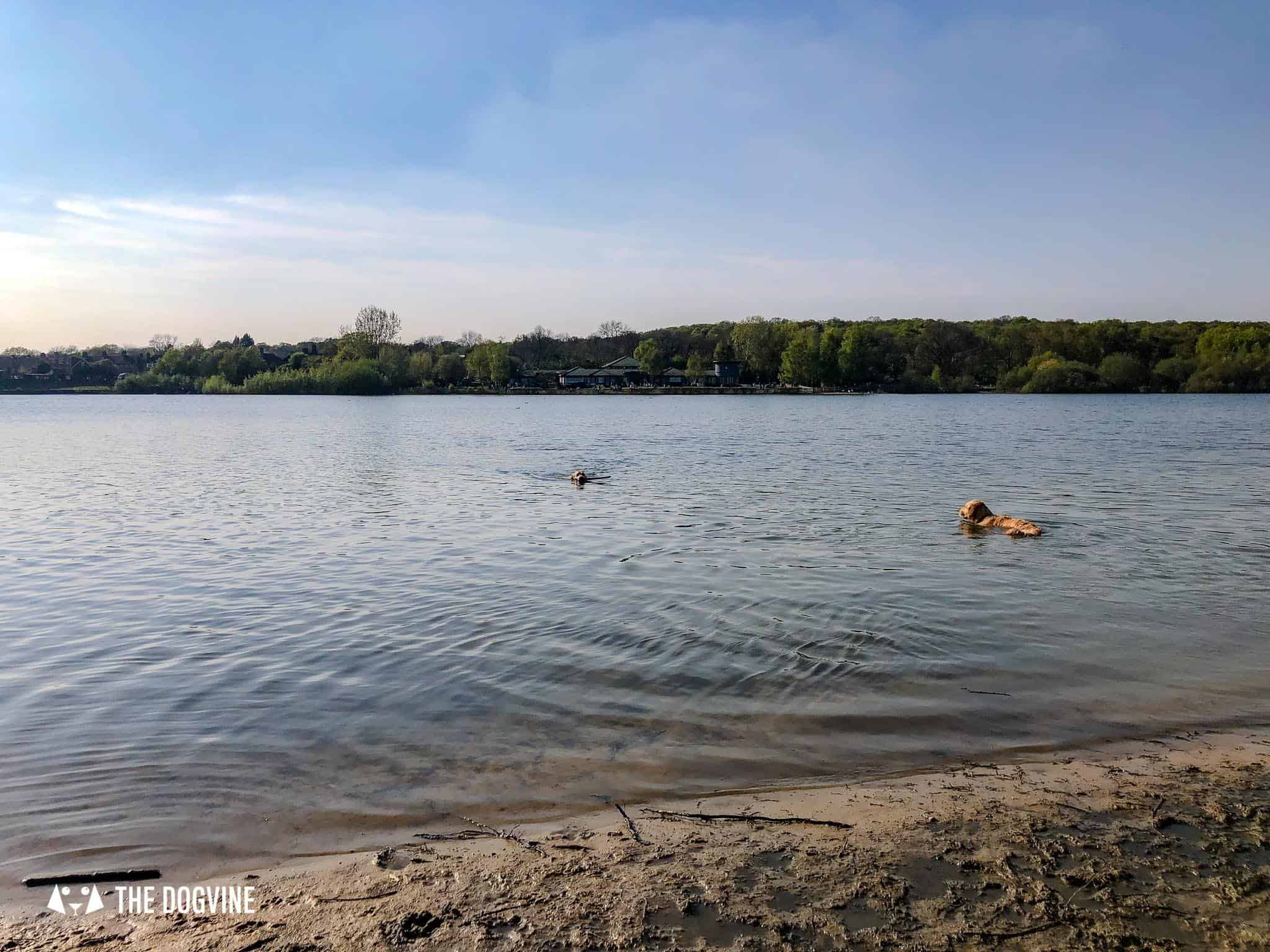 After Visiting The Beach

Bear in mind there are no refreshments by the dog beach so bring your own (or at the very least water). Ruislip Lido does have a café near the main beach but to be honest we didn’t venture inside as it was so busy. 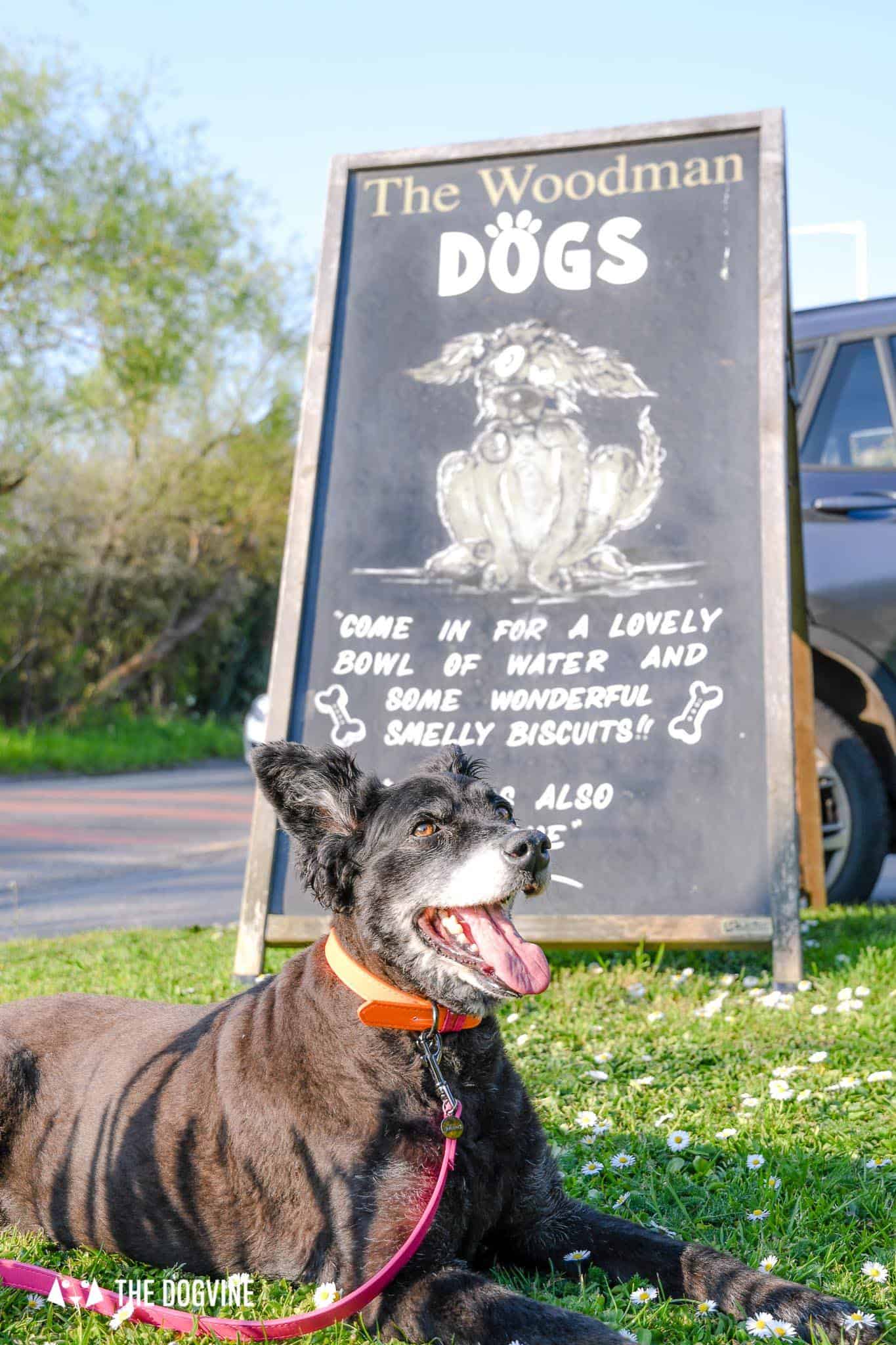 We decided to head back through the woods and check out a local dog-friendly pub we had seen on the drive in – The Woodman. Aside from the sign outside which definitely gave a warm welcome to dogs, the owner soon came round to say hello and offer Belinha a bowl of water and some dog biscuits as we enjoyed the beer garden. Based on that alone we would definitely recommend escaping to The Woodman for a drink (we walked there but there is also parking available) rather than tackling the busy café at the Lido. 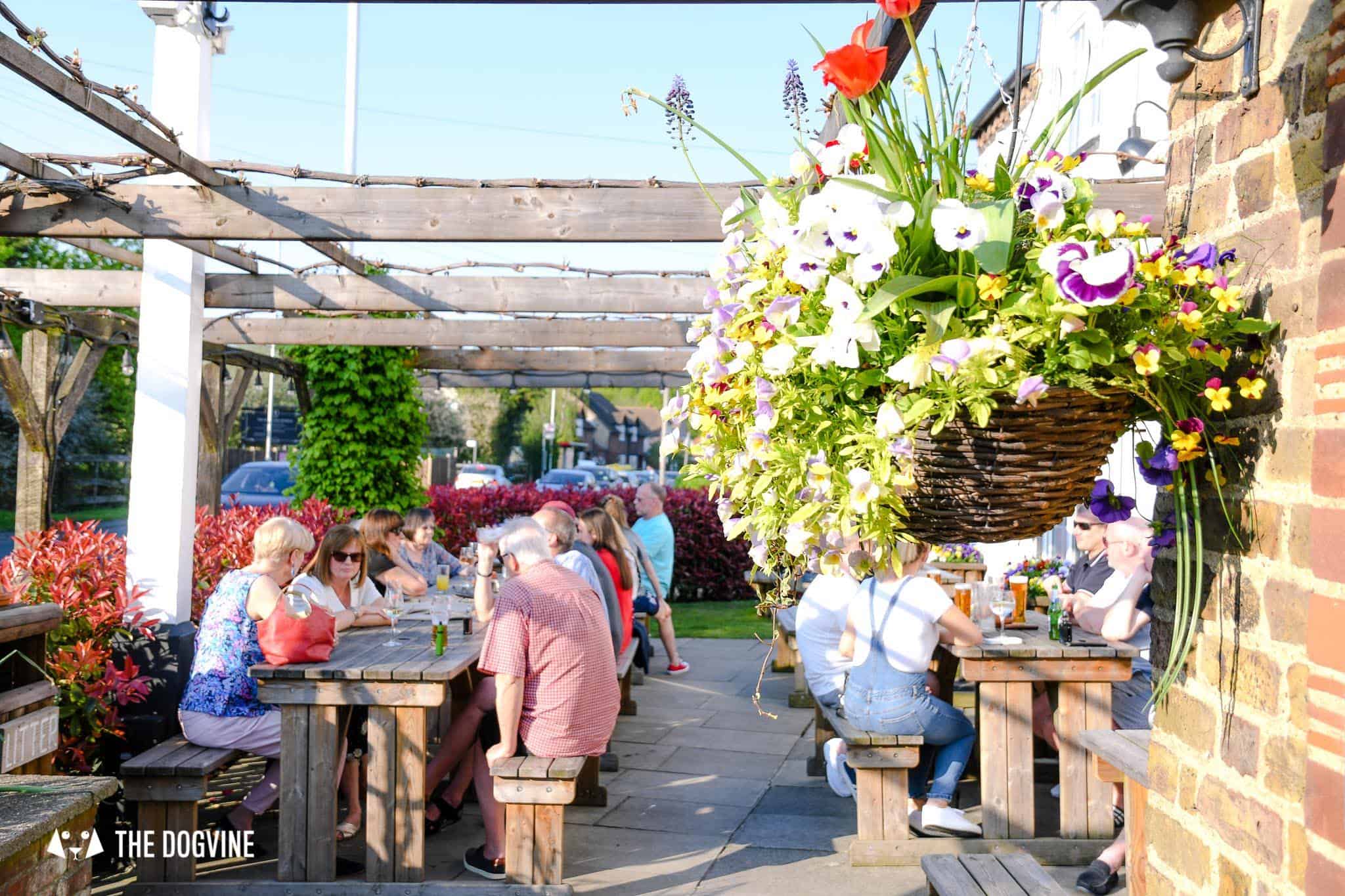 How To Get To Ruislip Lido Dog Beach

By car: The sat nav location is HA4 7TY (Ruislip Lido). There is a car park next to the Lido but on busy days this will get full early and you will likely get stuck in the traffic jam of cars queuing to get in only to be turned away.

By public transport: take the Metropolitan or Piccadilly lines to Ruislip Tube and then the H13 Bus towards Ruislip Lido.

Before visiting, we found it hard to visualize where the dog beach was, so here’s a map of how to get to Ruislip Dog Beach from the parking point we suggested as well as in relation to the other landmarks. 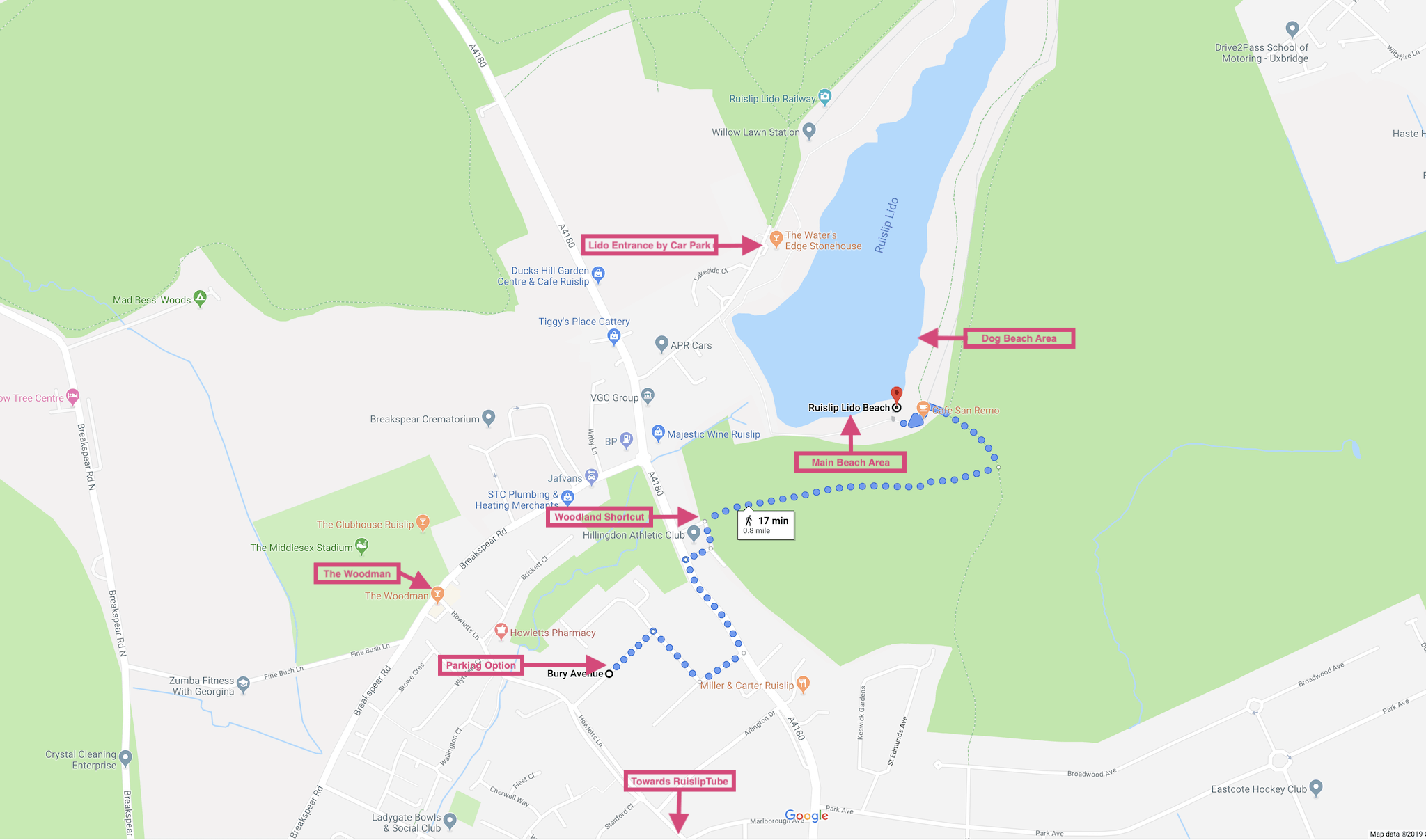 Was it a Paws Up for Our Visit?

I have to say that in the end, we were glad we made the effort to visit. It is rare to see an outdoor London Lido (with a dog beach), quite like it so we enjoyed the unique perspective and our afternoon there. If you are able to visit in the week, then that is probably best but if weekends are your only free time, then following our tips above should help you avoid some of the crowds. 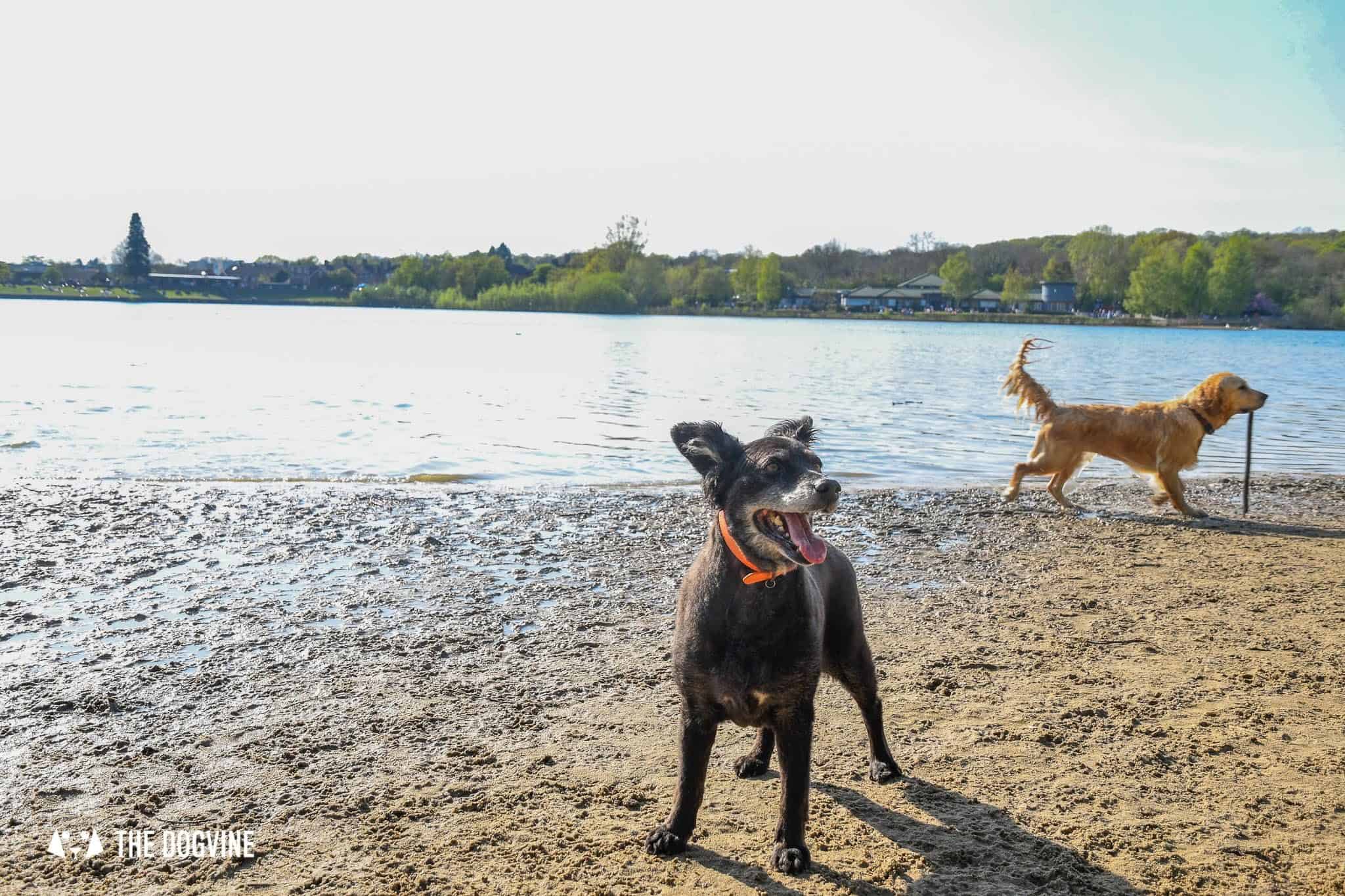 If we lived locally, we would certainly visit again but coming from South West London it took us a good hour to drive there so we would probably choose to spend that time driving to some of the dog-friendly beaches on the coast next time. However, if you don’t drive, then it’s the only dog beach in London that’s open year-round and you can visit on the tube (coming from Kings Cross St Pancras or Waterloo the journey would take approx. 1 hr and 20 minutes), so from that perspective one for the doggy ‘to visit’ list.

WE HOPE YOU FOUND OUR REVIEW OF RUISLIP LIDO DOG BEACH USEFUL! 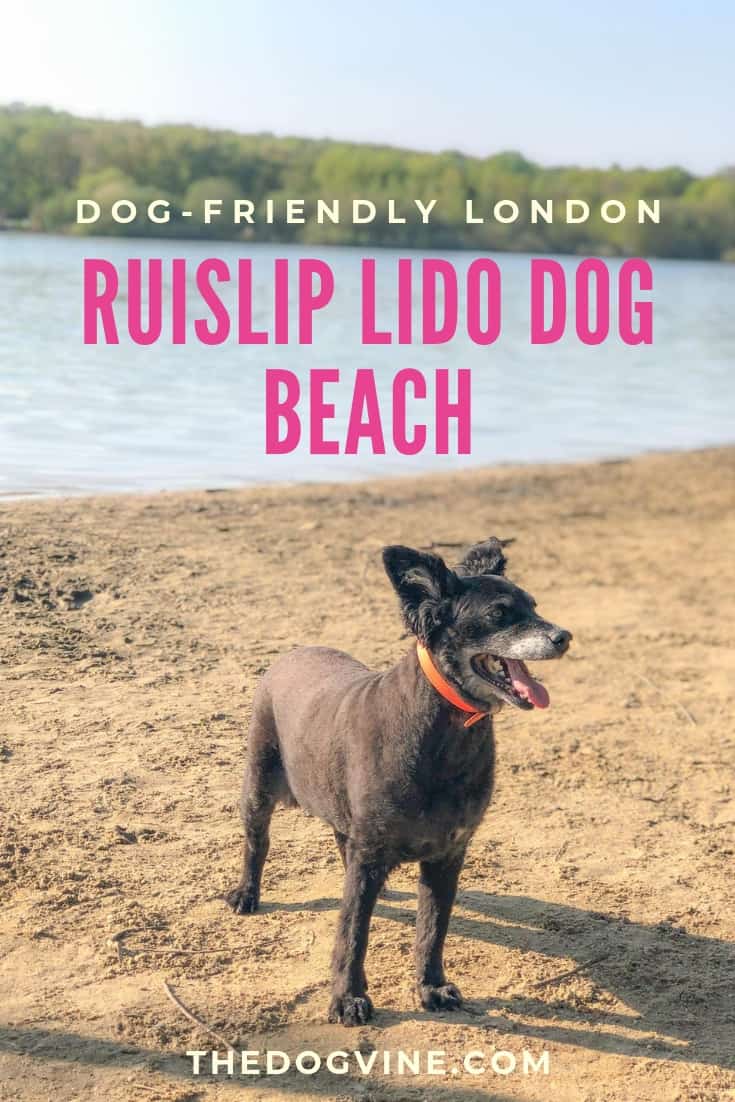