Built for the 2012 Summer Olympics and Paralympics, Queen Elizabeth Olympic Park is open to the public every day and home to Olympic legacies such as the Olympic Rings, London Stadium and London Aquatics Centre, all surrounded by miles of parklands and waterways for Londoners to enjoy…and that includes London dogs. Of course, you can take a walk around the Queen Elizabeth Olympic Park which features in our guide to ‘‘Free Dog-friendly Things To Do in London’, but why walk when you can see the park in style by taking one of London’s Olympic Park dog-friendly boat tours down the River Lea? 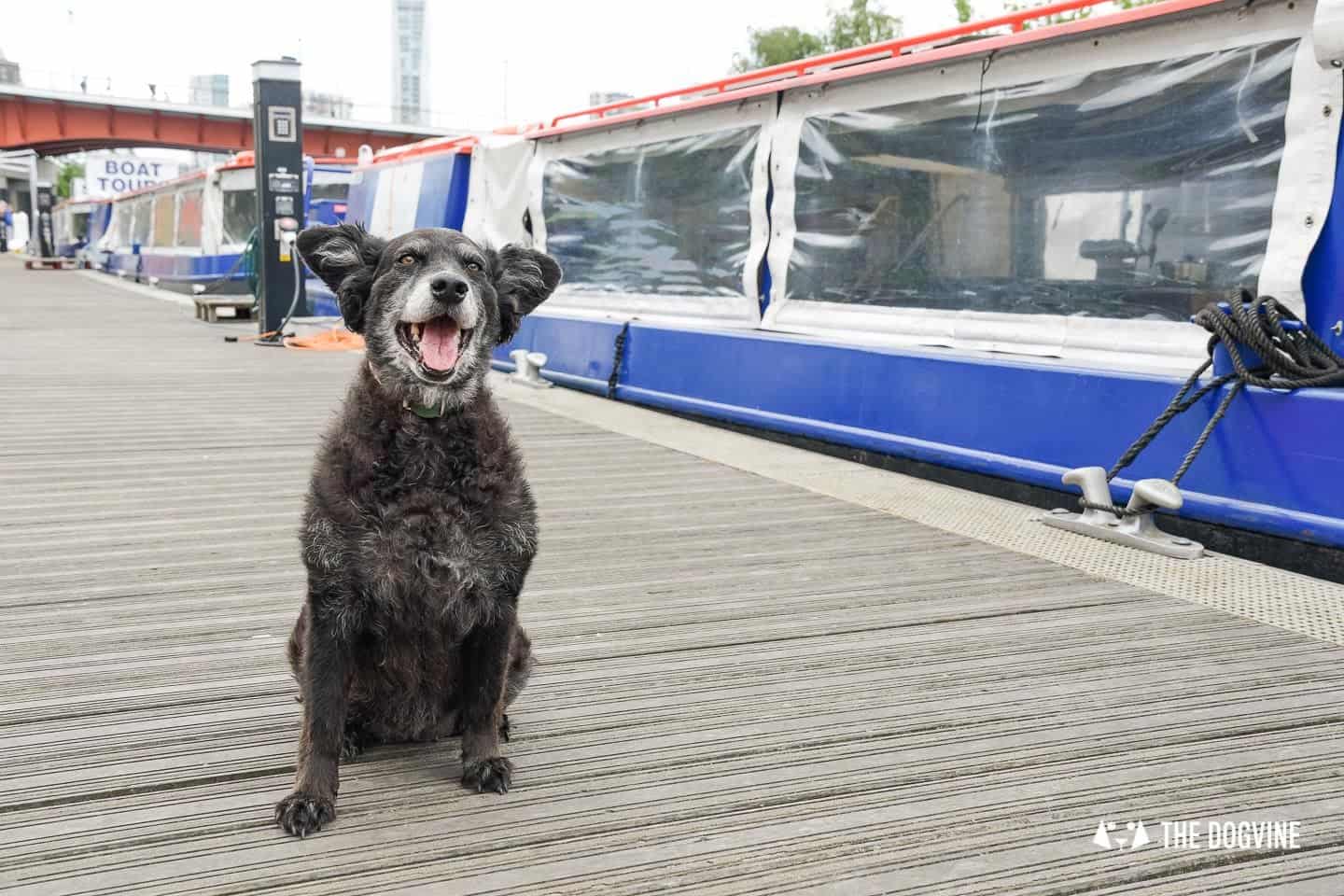 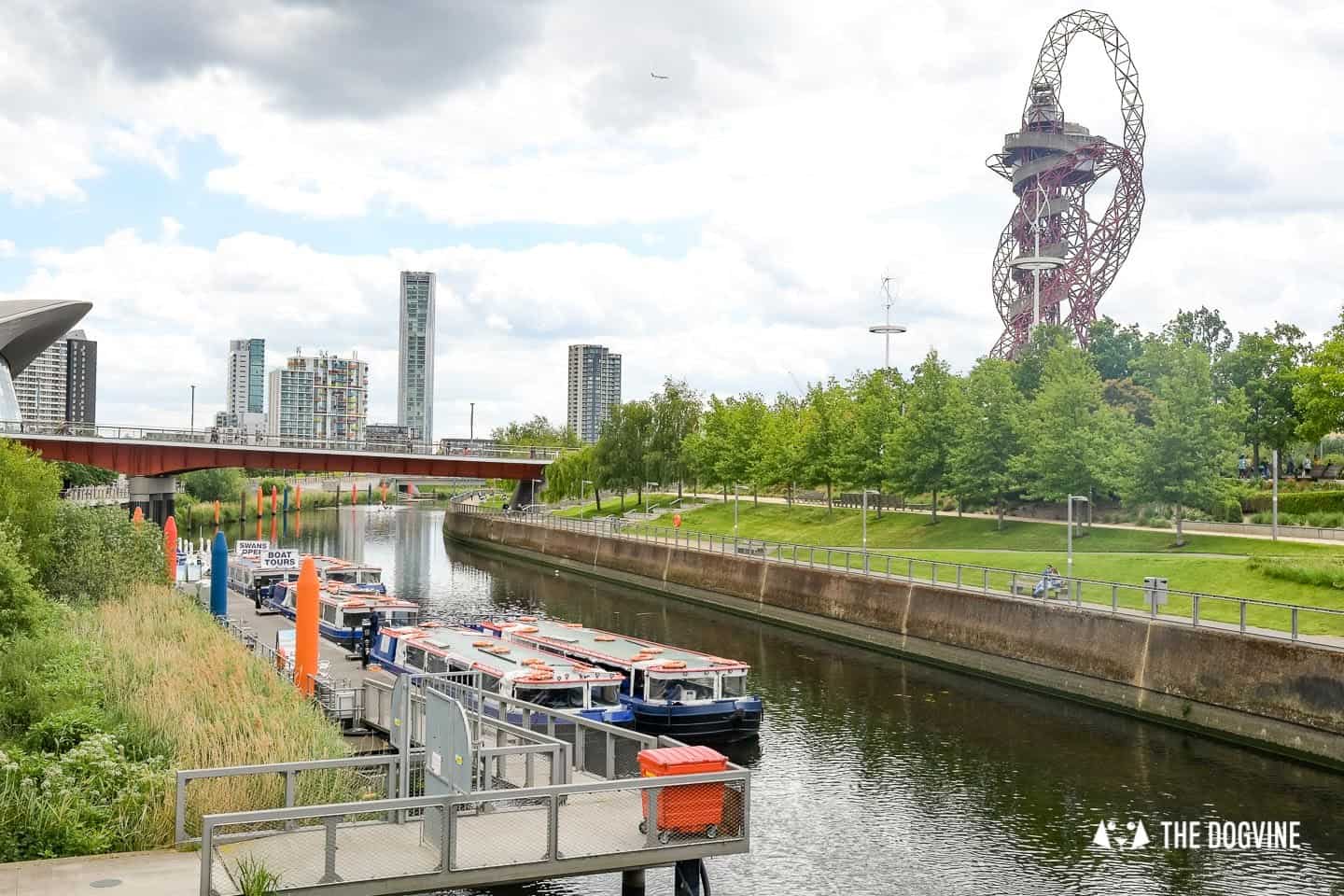 When we found out that dogs could join their humans on the Queen Elizabeth Olympic Park Boat Tours, it was even more reason to come on board. So one Sunday afternoon, we travelled across London to Stratford to get to know one of London’s great legacies and take to the waters of the Olympic Park. Here’s what we got up to and all you need to know if you decide to come on board too… 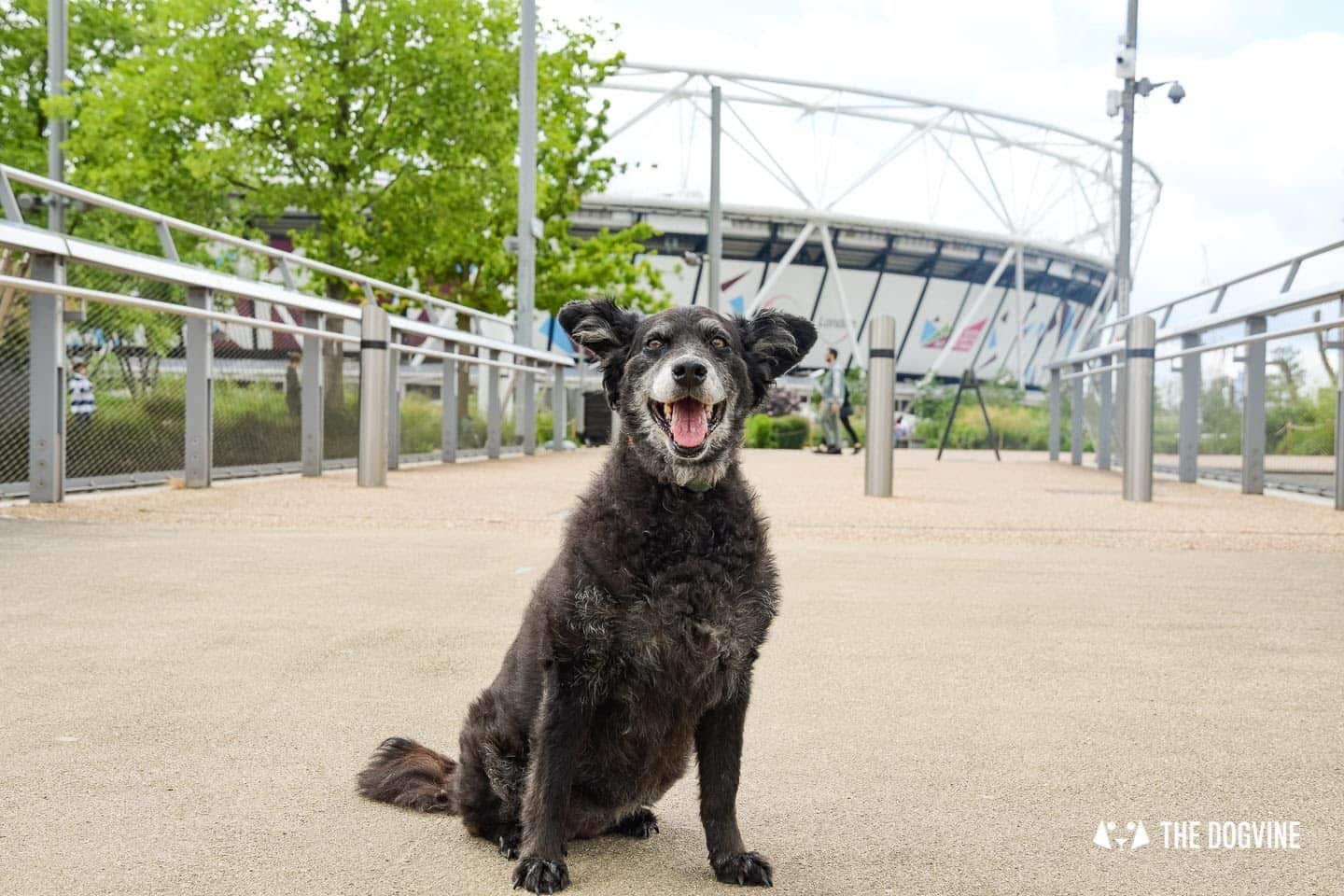 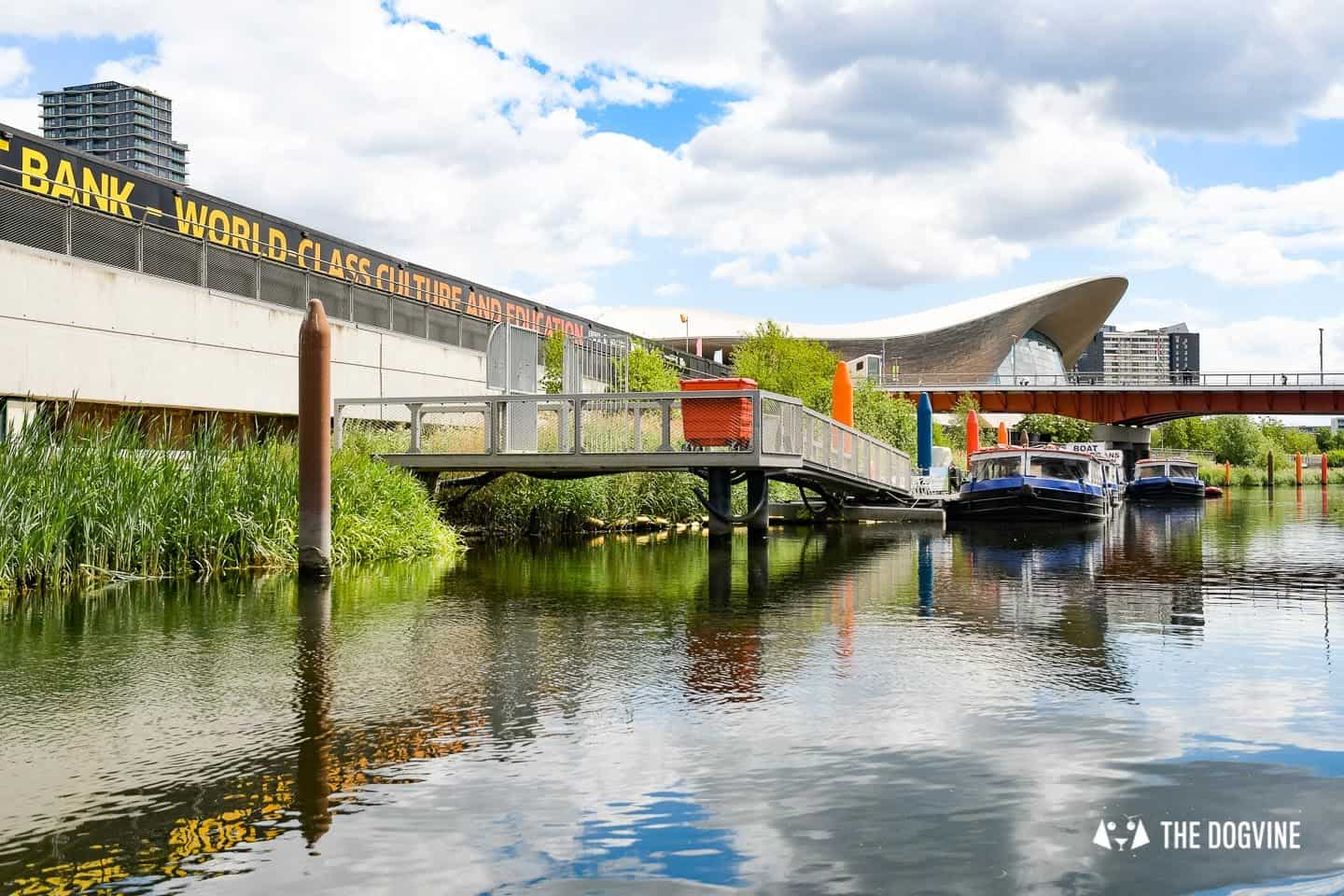 The Queen Elizabeth Olympic Park Boat Tours are run by Lee and Stort Boat Tours who have been running them since 2014 and are in fact, the only company to offer boat tours in the park. There is no need to book as you just turn up and buy your ticket on the spot. When we went, the boats weren’t busy at all but that could have been because we took the first boat of the day at midday. 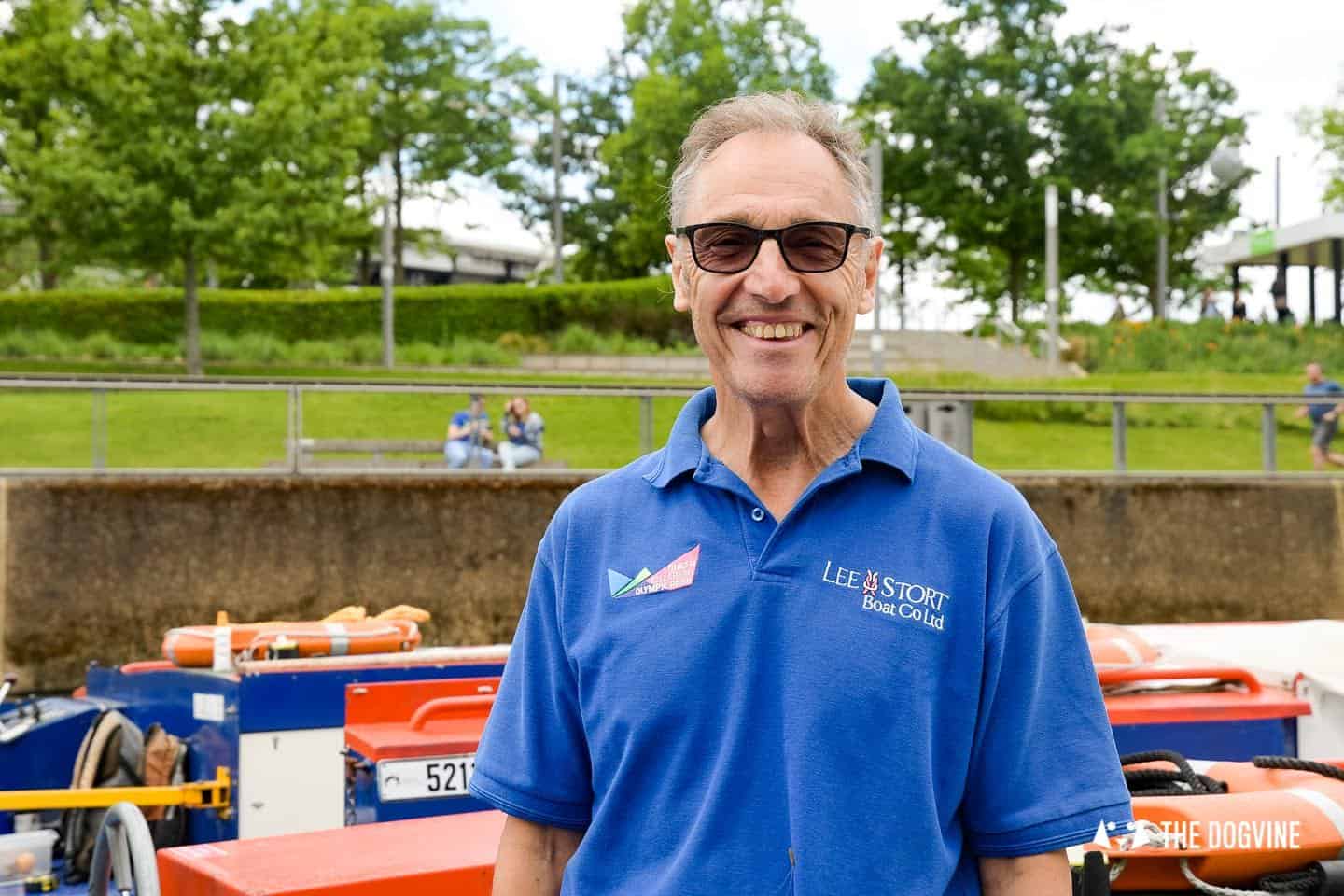 When we arrived we were greeted with big smiles by the Lee and Stort crew, Mal and Richie who immediately went to get a big bowl of water for Belinha so it was great to have such a warm welcome. 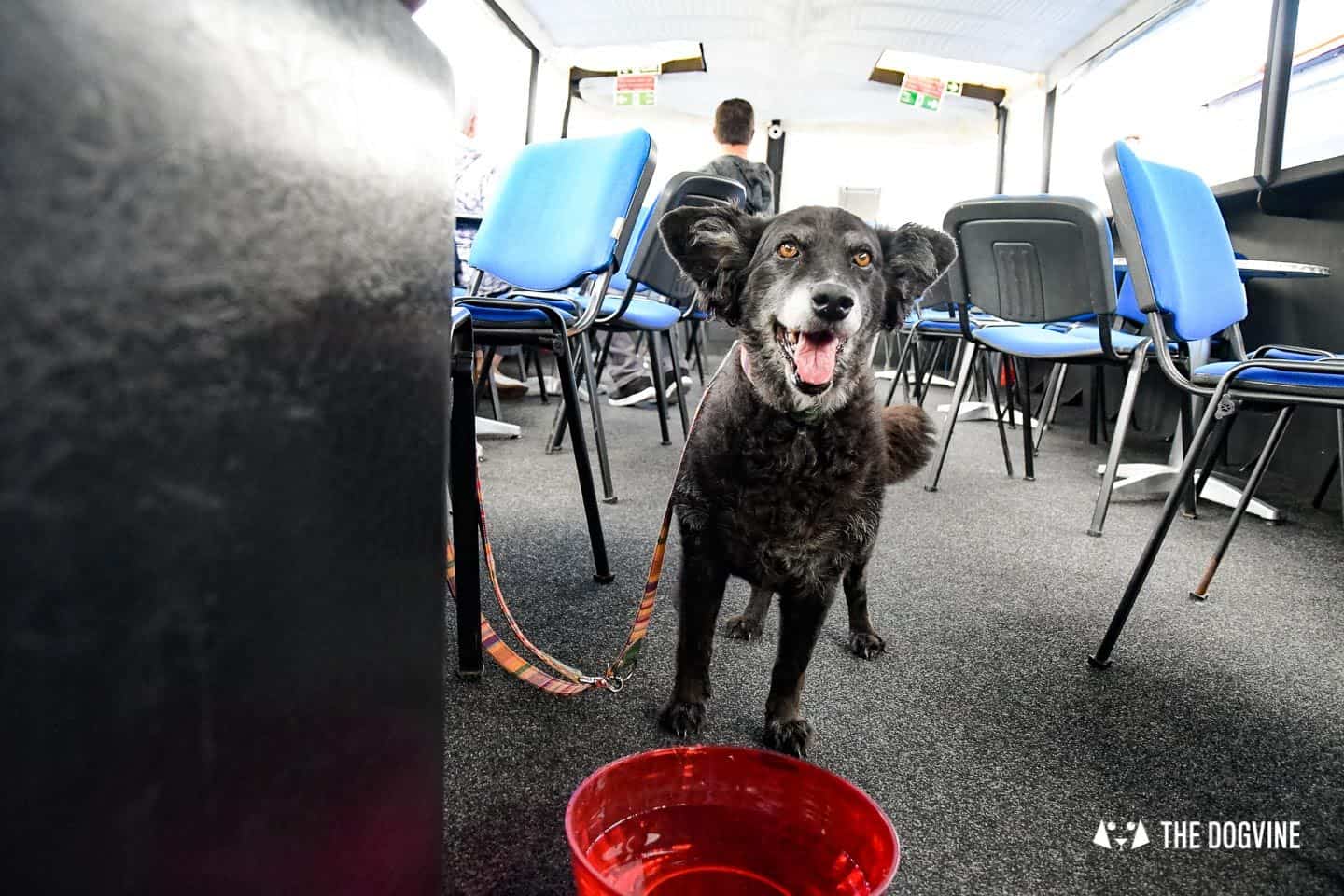 As we set off for the 45-minute trip, our guide Mal told us about the history of the Olympic Park and how it is upholding the Olympic legacy and I have to admit, I was surprised at how interested I was. 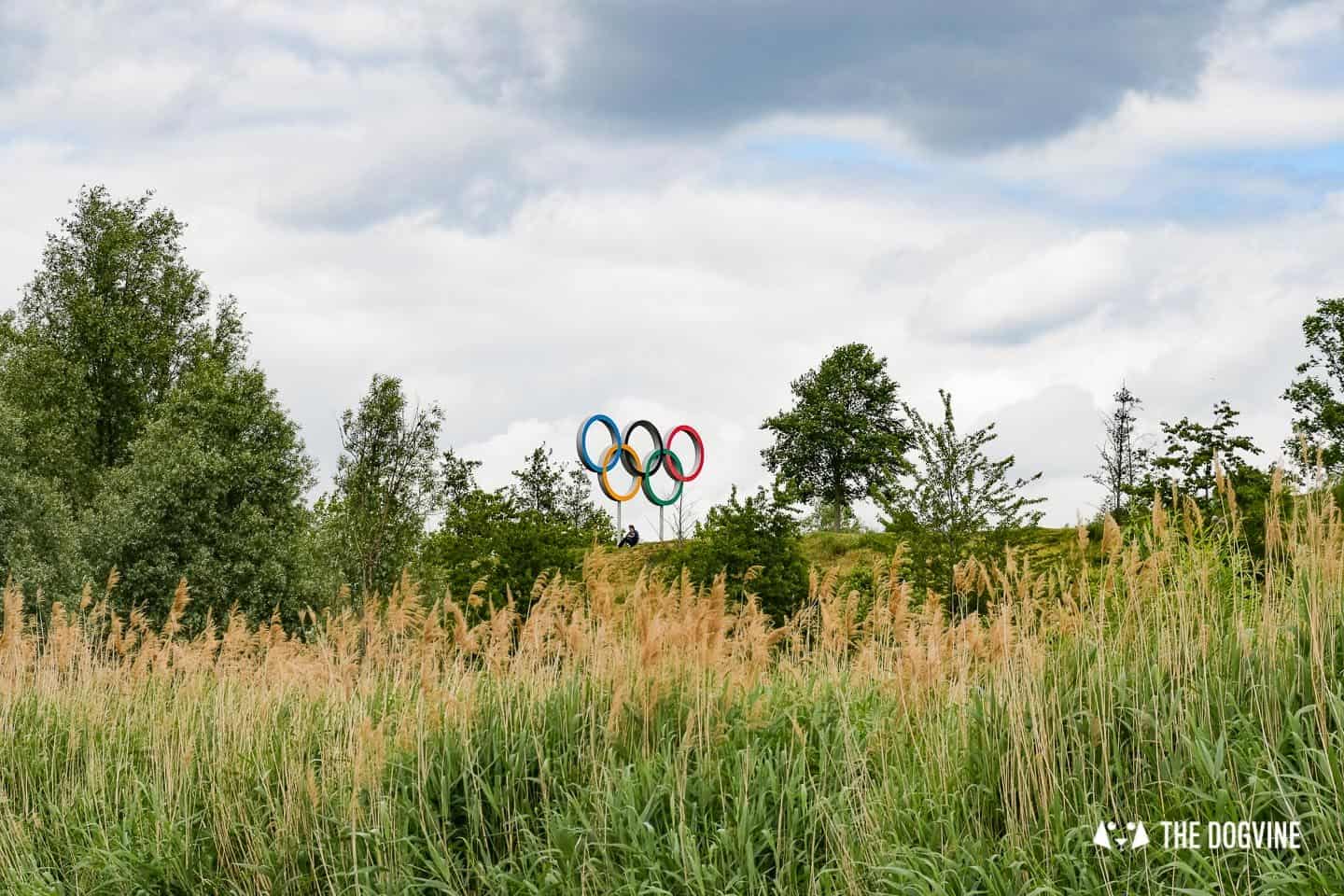 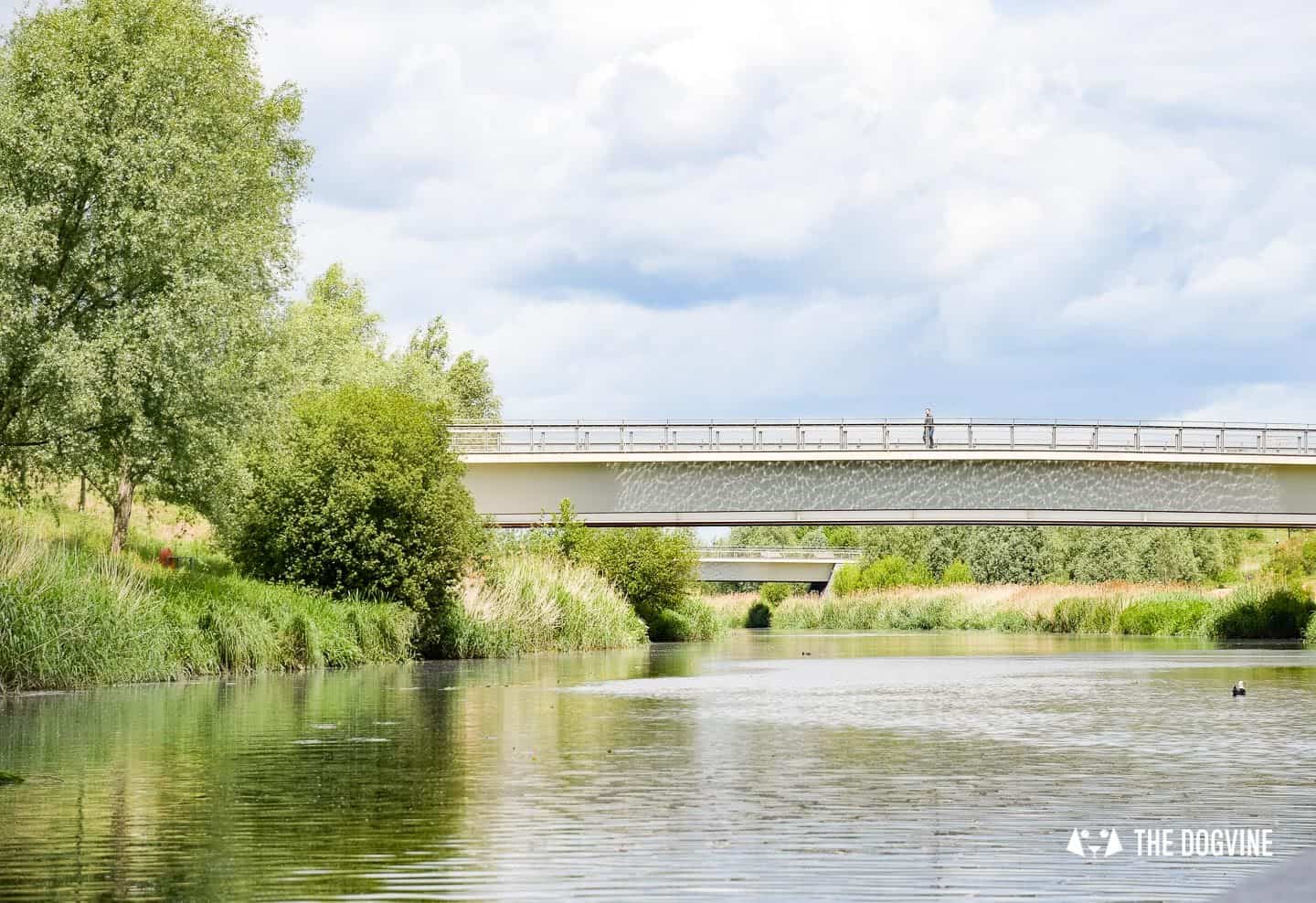 I certainly won’t spoil the tour by sharing all of Mal’s insider info in this post but I will say that we were listening avidly throughout the whole tour and we left proud that London is one of the only cities to be allowed to keep the famous Olympic Rings after the event. This is due to the commendable work by the London Legacy Corporation and their promise to “transform and integrate one of the most challenged areas in the UK into world-class, sustainable and thriving neighbourhoods” which has resulted in the Queen Elizabeth Park and surrounding area being what it is today. 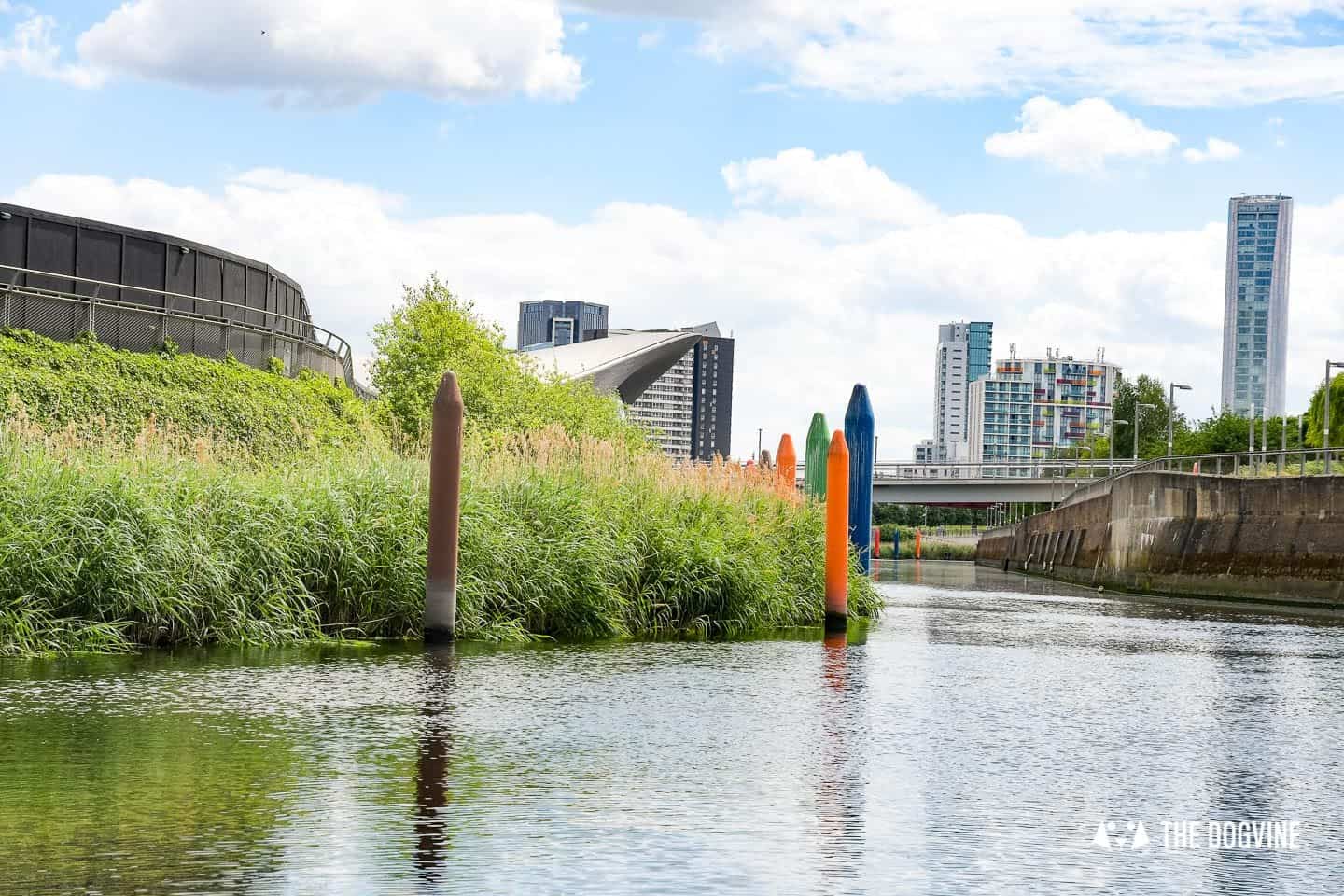 The view from the boat allows you to reflect and see first hand just how important the conservation of the area is. It also gives you a unique view of some of East London’s landmarks such as Carpenters Road Lock, the Olympic Rings, ArcelorMittal Orbit, Lee Valley Velopark and London Aquatics Centre that you just wouldn’t get anywhere else. 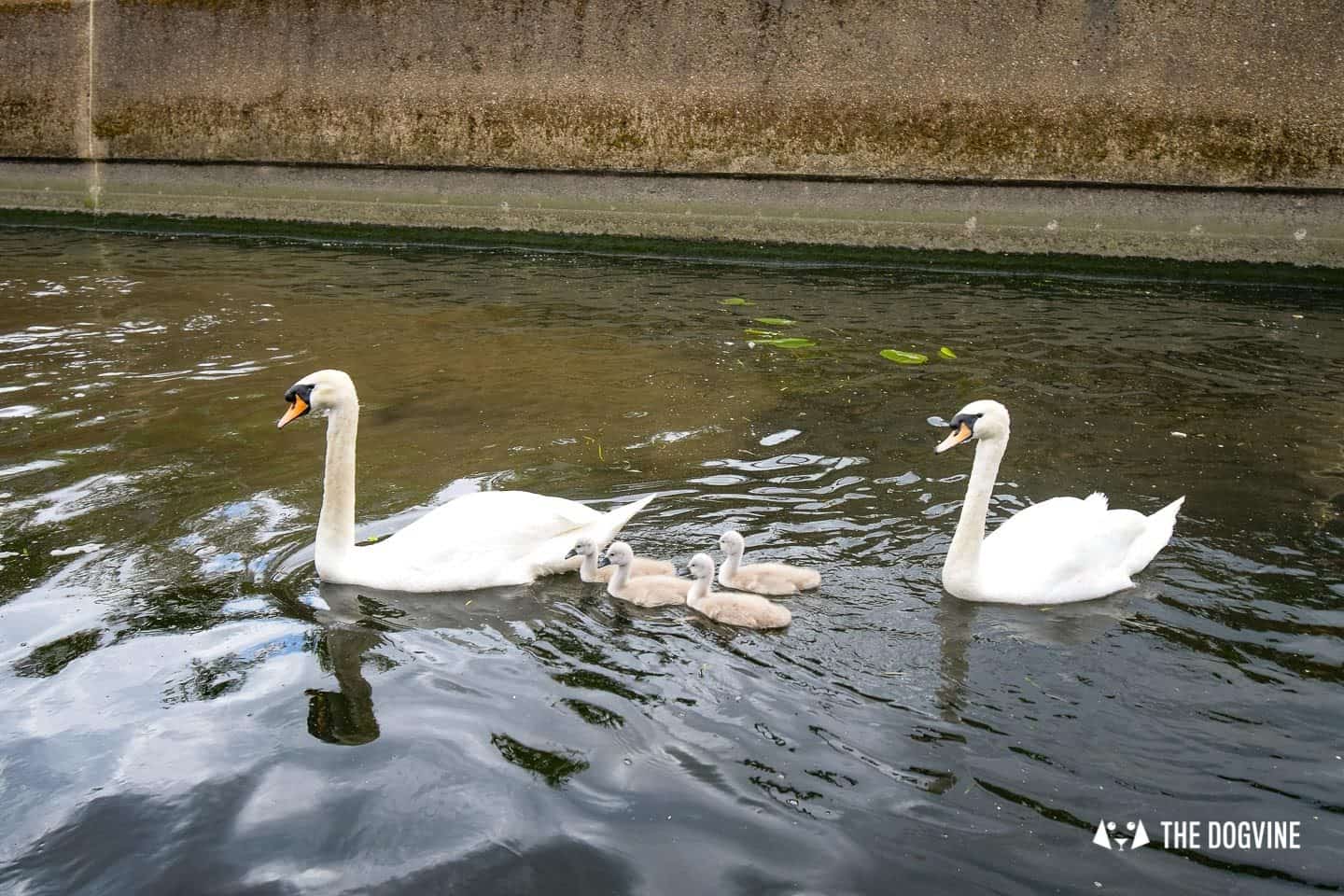 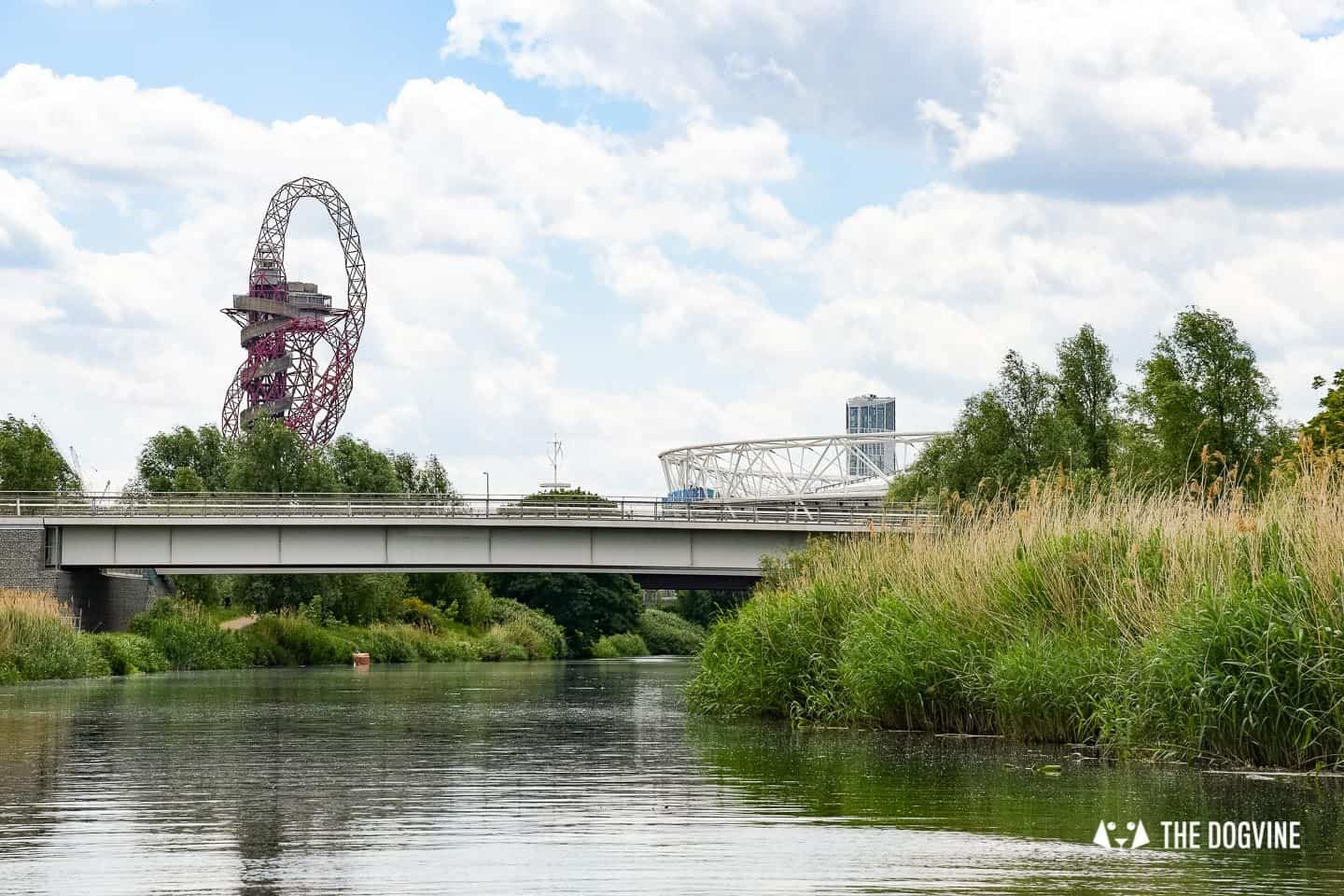 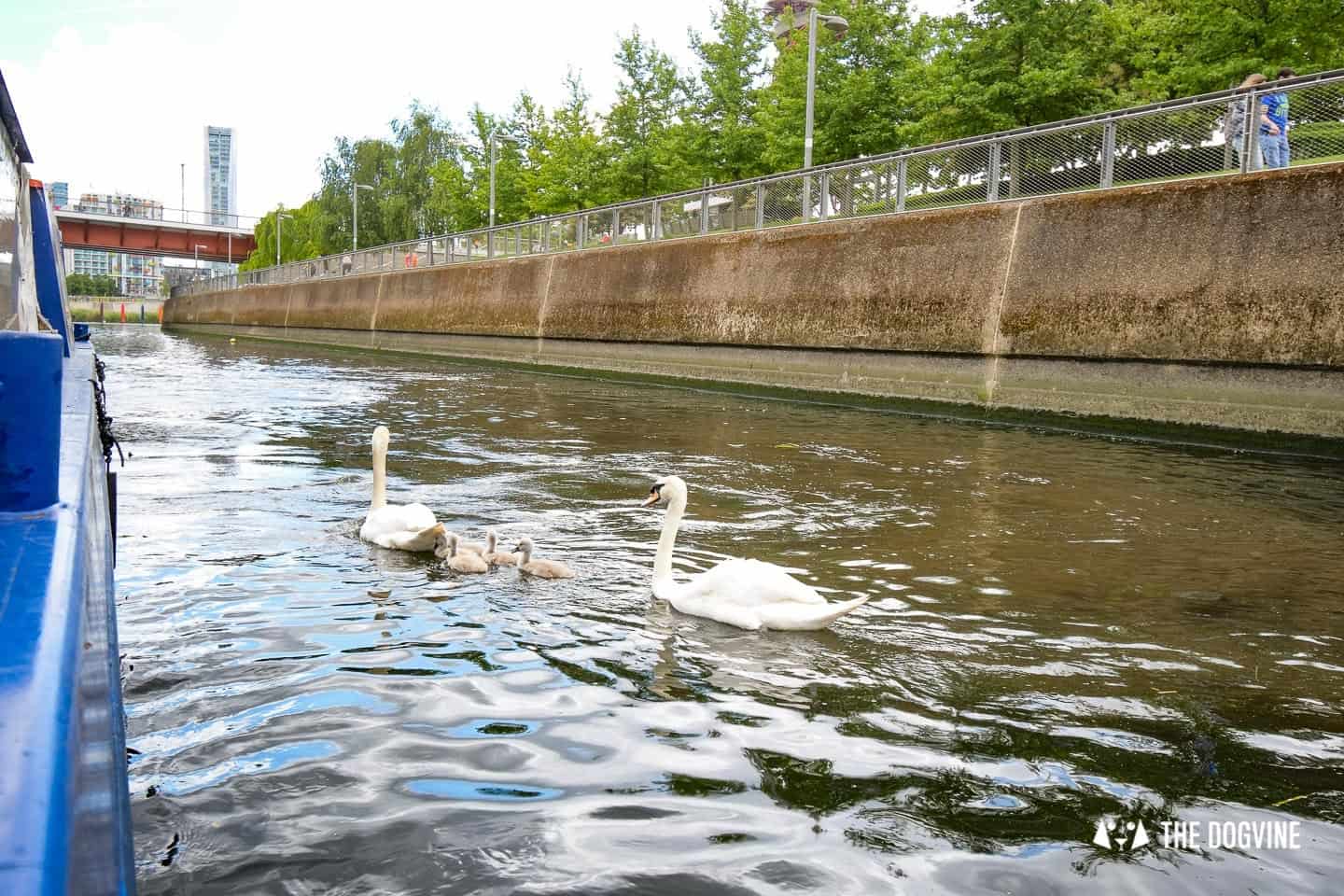 All too soon it was time to turn our boat around and head back to the dock but even the return journey offered plenty to see. 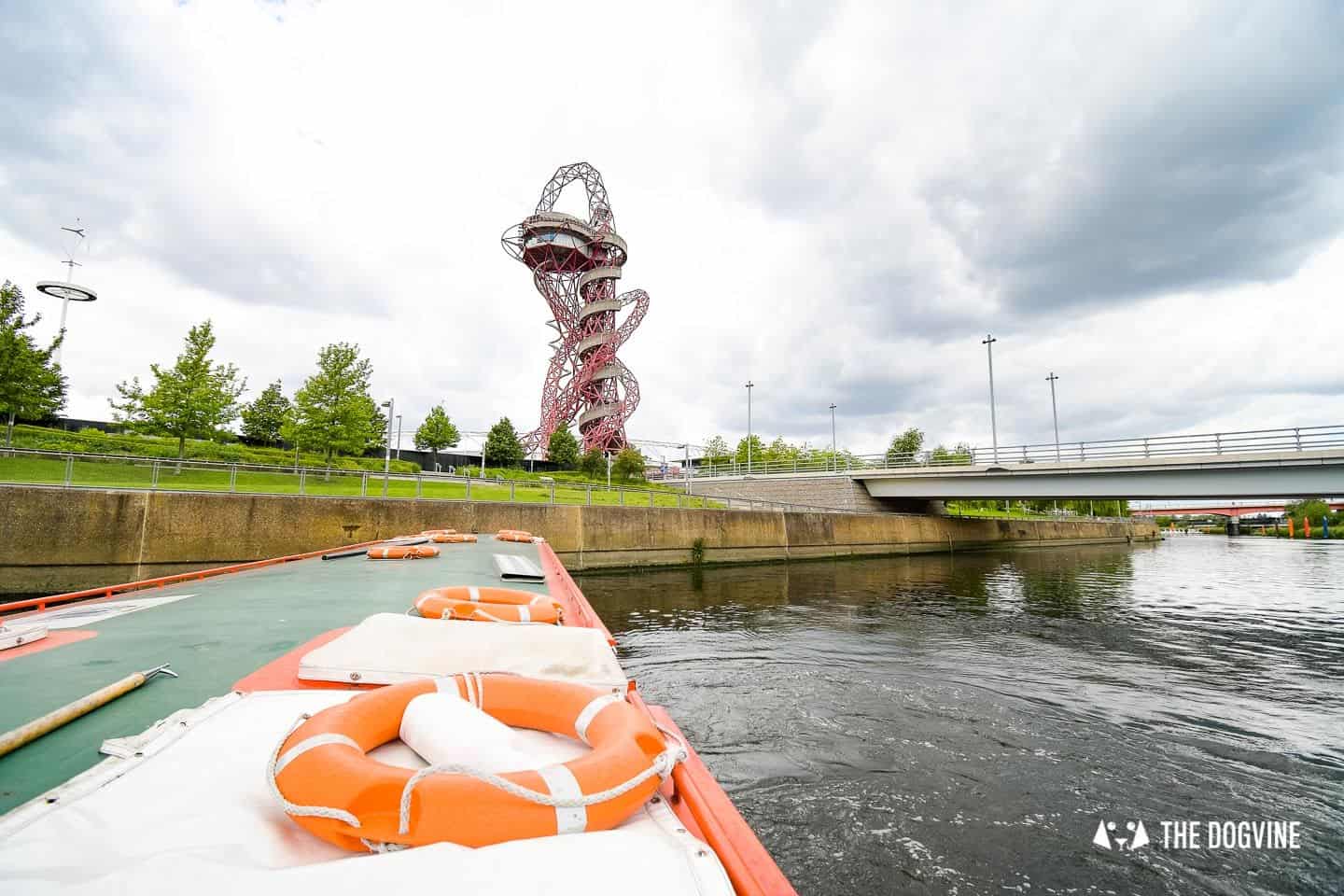 The Olympic Park dog-friendly boat tours take about 45 minutes round trip and we thoroughly enjoyed ours. Both humans and hounds were made to feel very welcome so a big thank you to our crew Mal and Richie for an insightful Sunday afternoon cruise down the River Lea, it’s a paws up from us as a unique and dog-friendly way to get to know the Queen Elizabeth Olympic Park! 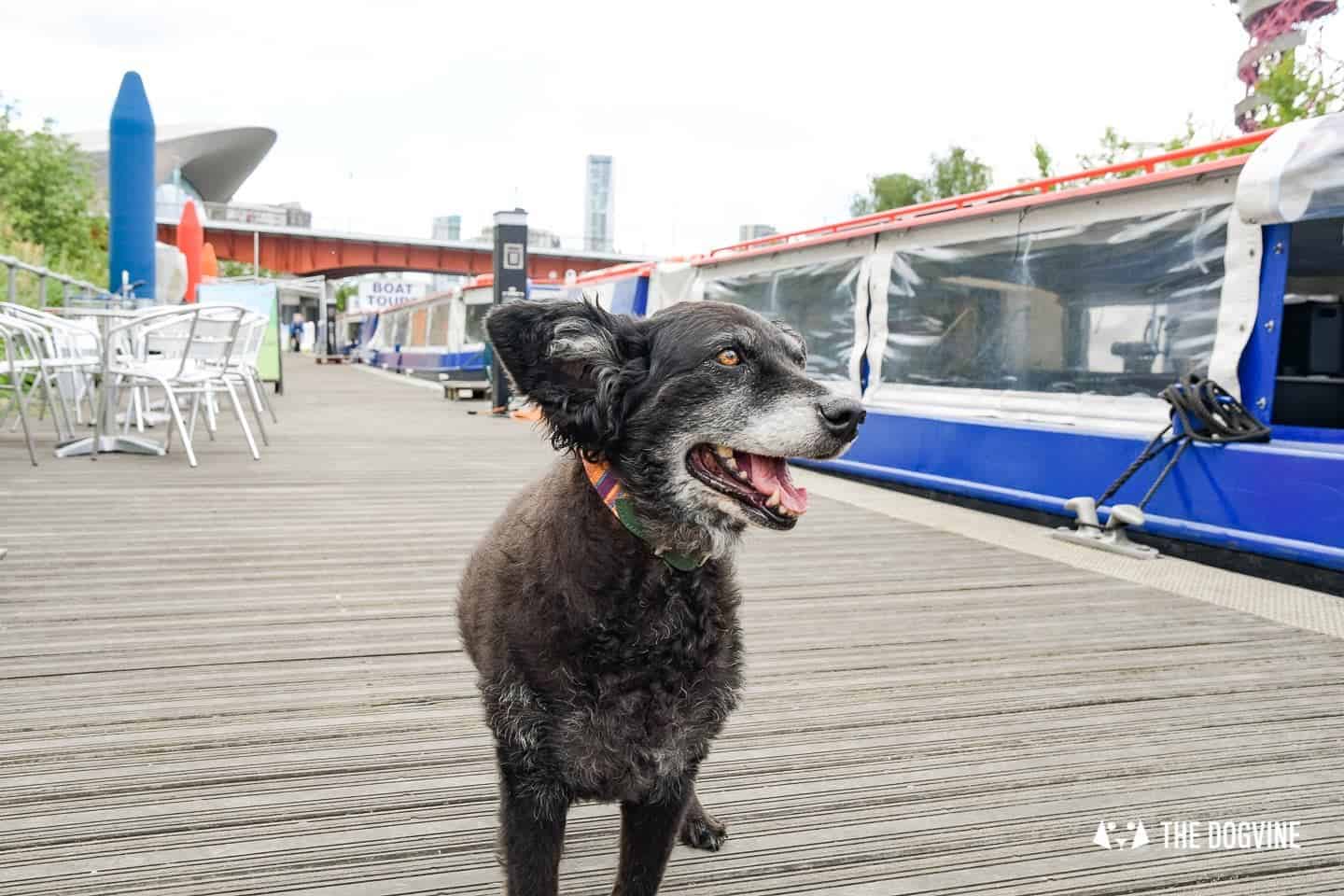 Olympic Park Boat Tours – What You Need To Know 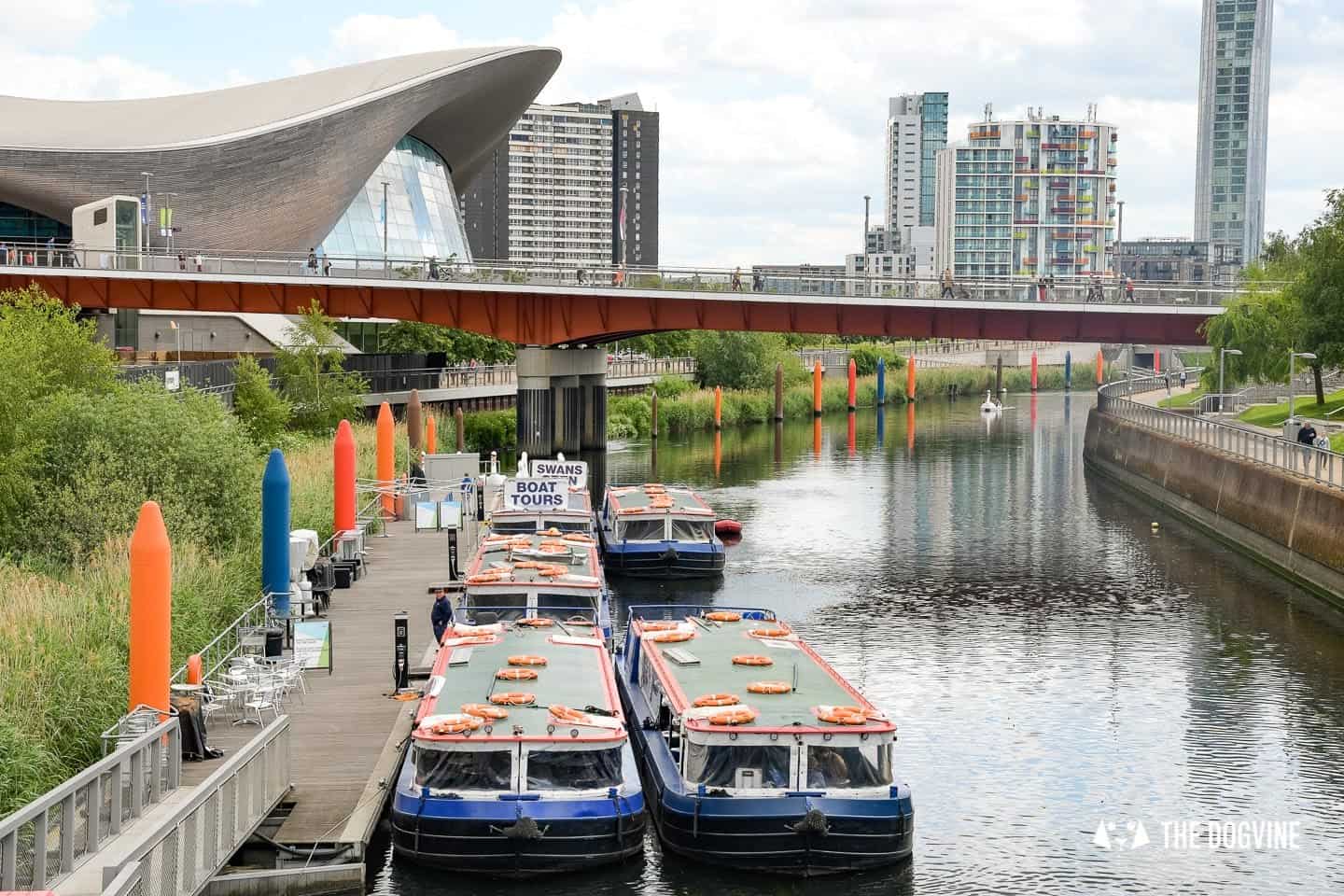 If you’d like to take a trip on one of the Olympic Park dog-friendly boat tours yourself, here’s what you need to know…

When: The boat tours are available between the beginning of April and October on weekends and during the school holidays (including bank holidays). The first boat tour is at midday and then on the hour after that. (This is subject to change due to river or weather conditions – if in doubt contact Lee and Stort, details below). 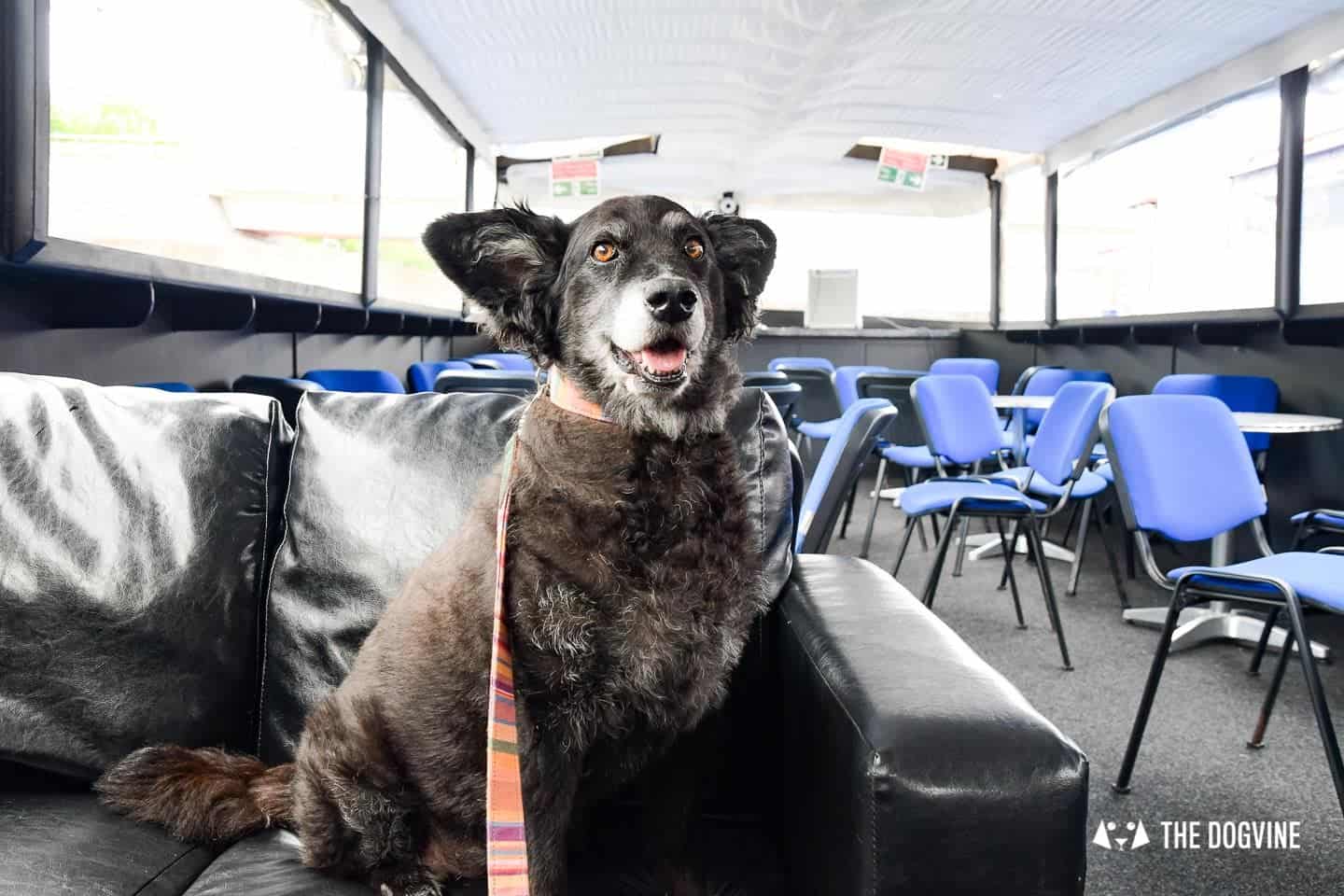 Tickets: Tickets are very reasonable for this dog-friendly London attraction, with the 2019 prices as follows:

Facilities: The Lee and Stort Boat tours are fully accessible and have two toilets (one disabled), refreshments and a licensed bar on board. The boats are covered but with wide-open windows and have plenty of space (for up to 60 passengers). Well-behaved dogs, wheelchairs and buggies are welcome on board. 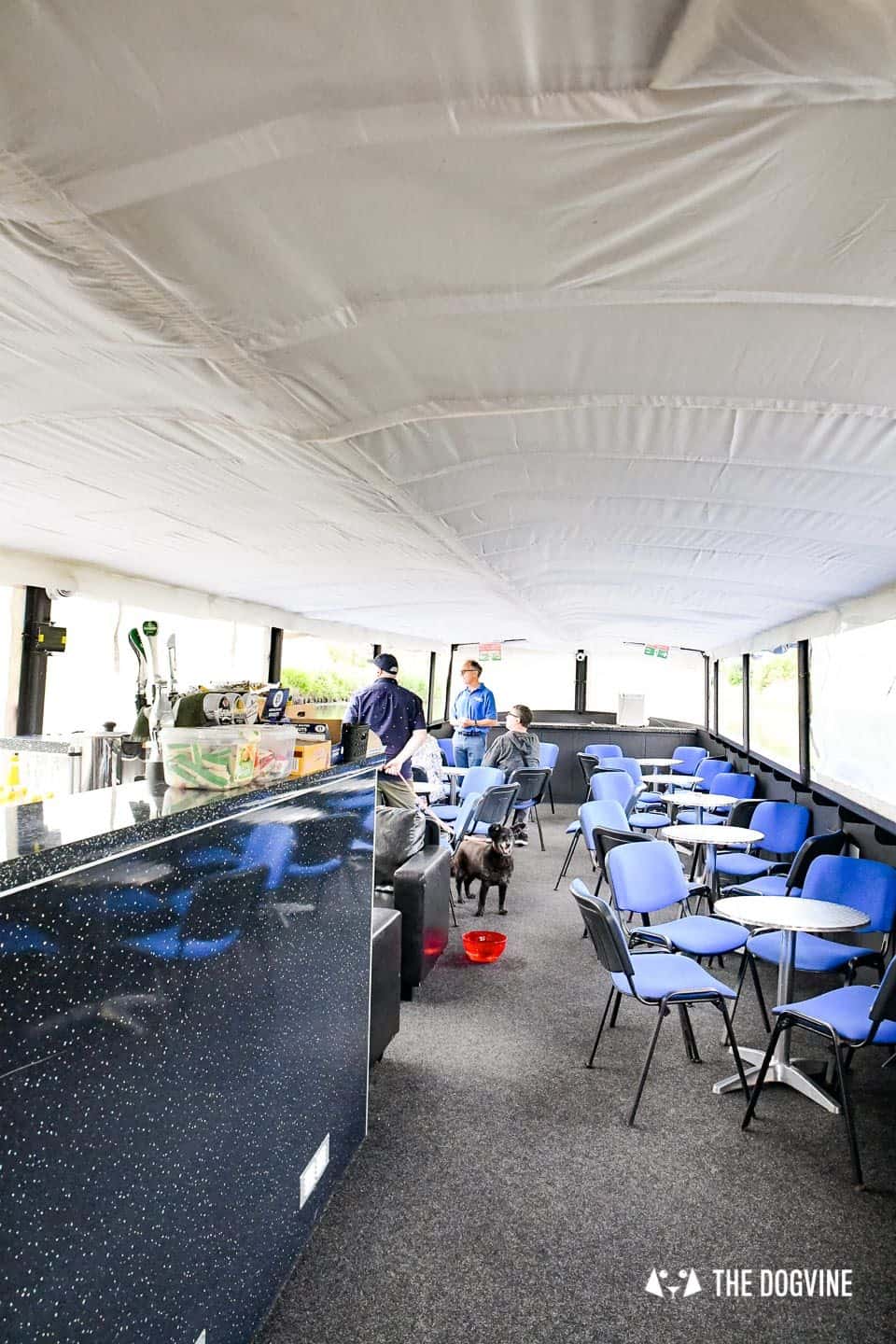 Getting to the Olympic Park Boat Tours: 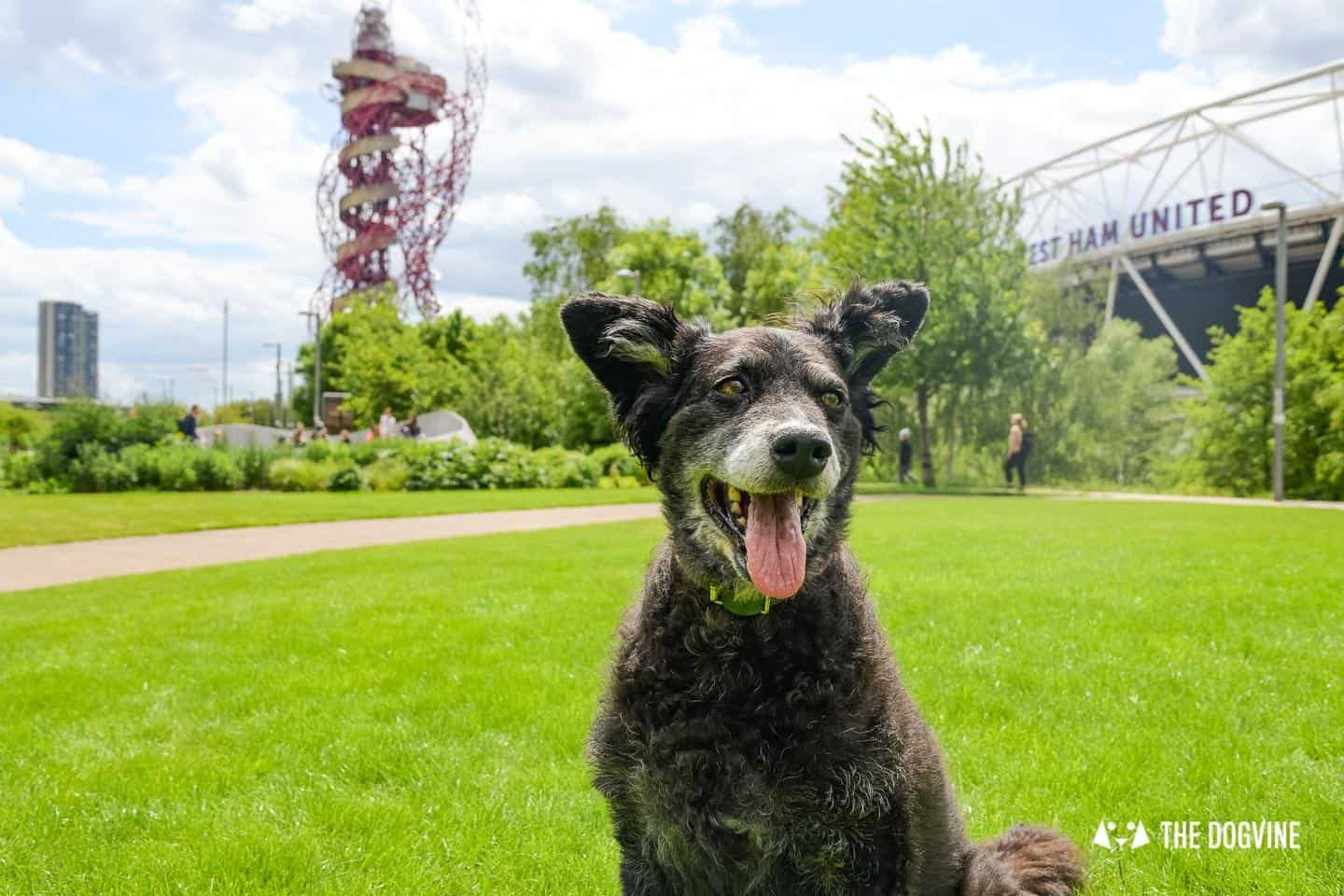 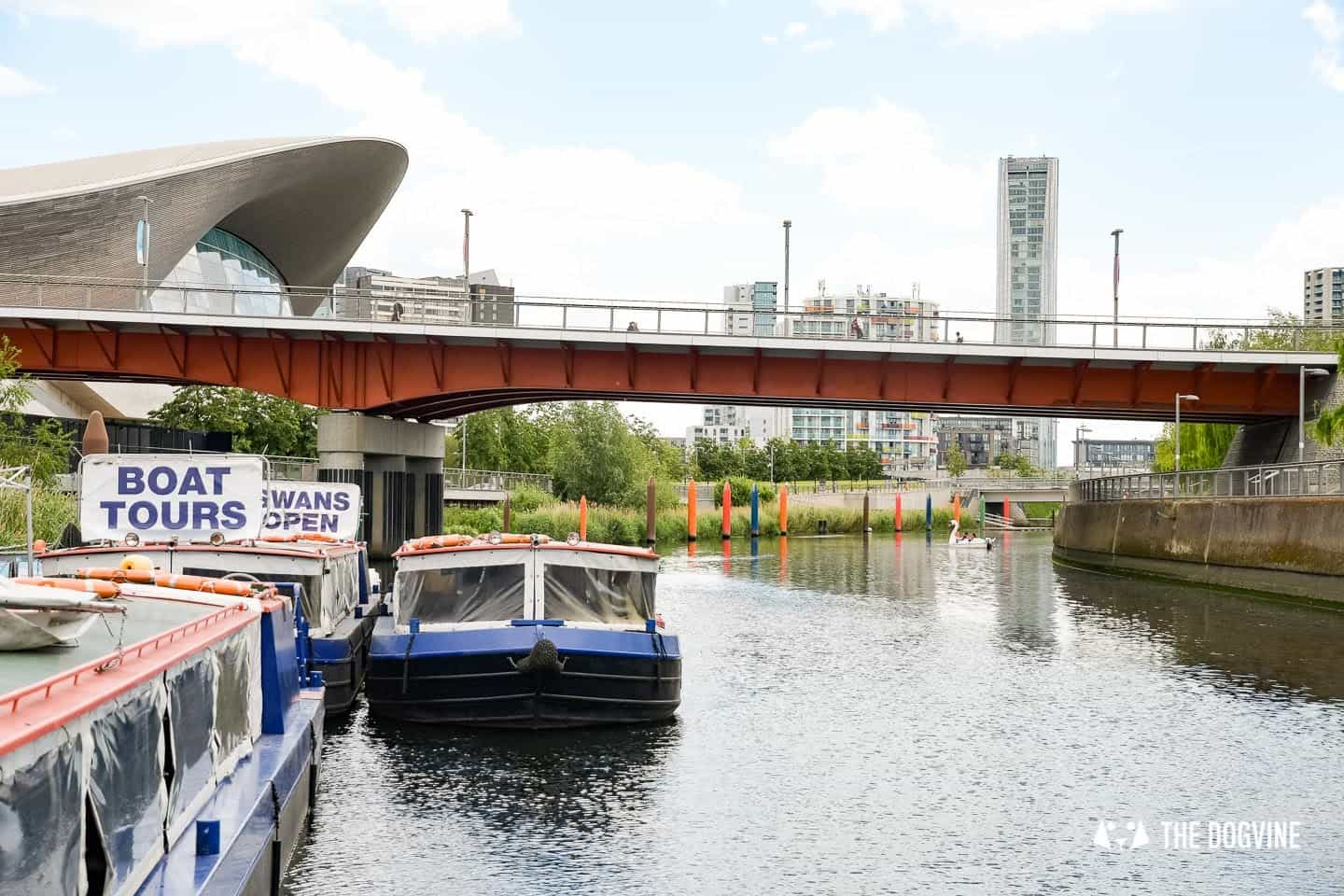 By Car: The Lee and Stort website indicates that the nearest parking is available in Westfield Shopping Centre. However, as we were bringing Belinha, we decided to park in the London Aquatics Centre Parking rather than in the shopping centre.

When we arrived there was plenty of parking available but also a sign that said that if you weren’t using the London Aquatics Centre, the parking fee would be a £45 flat fee instead of £2 per hour. The way around this is to not pay for your parking outside at the pay points but go inside the London Aquatics Centre and pay the £2 visitor fee as well as paying the parking there so our parking was a very reasonable £6 in total. 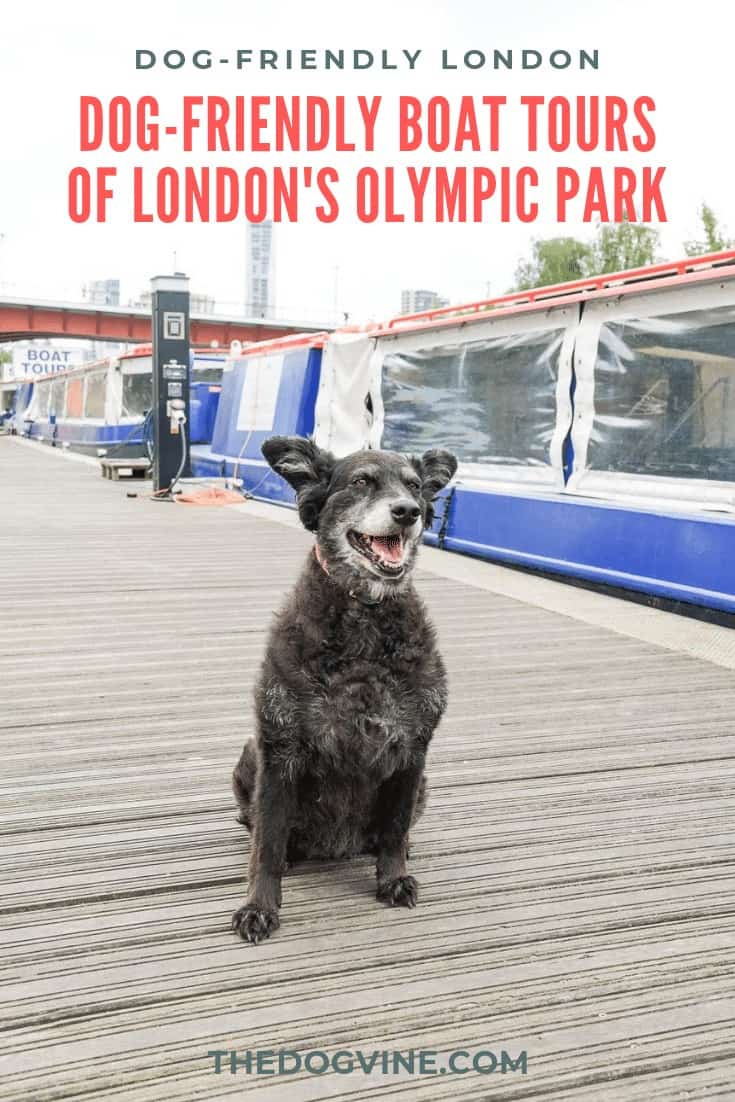 END_OF_DOCUMENT_TOKEN_TO_BE_REPLACED

Become Part of the Pack