You may already know the name Megan’s from it’s well-known spot on the King’s Road, Chelsea and the fact that they absolutely LOVE dogs. Well, now London pup owners have a second Megan’s to visit in South London, Megan’s by The Green in Parsons Green, SW6. We were lucky enough to be invited to the soft launch recently so read on to find out what we thought… 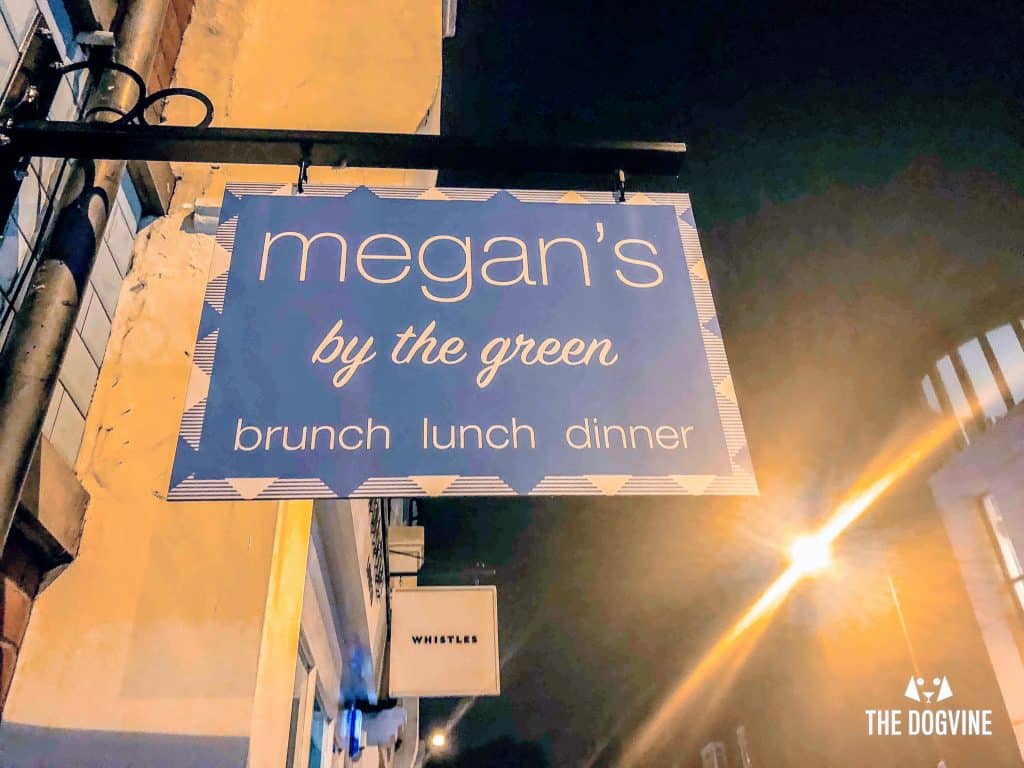 The first impression is that is really quite magical. Flowers and fairy-lights adorn the ceilings and walls which create a lovely quaint feel and like you’re stepping into a fairy grotto or even a different world. 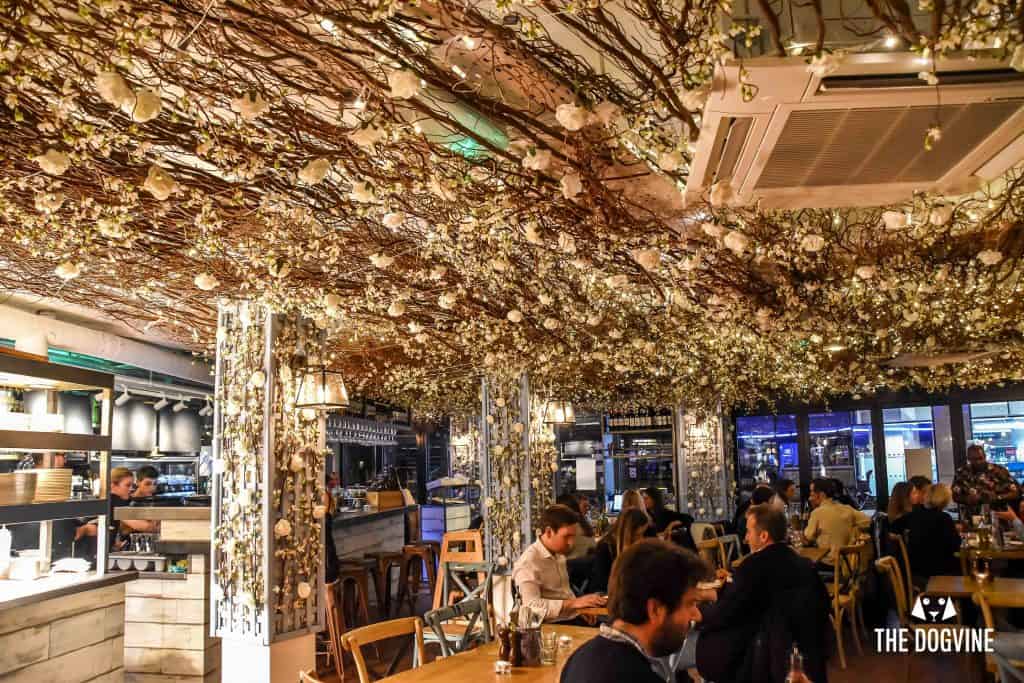 We were greeted by the very friendly manager Sham who as the very first question after hello asked if Belinha wanted some water…paws up for putting pooches first Sham! 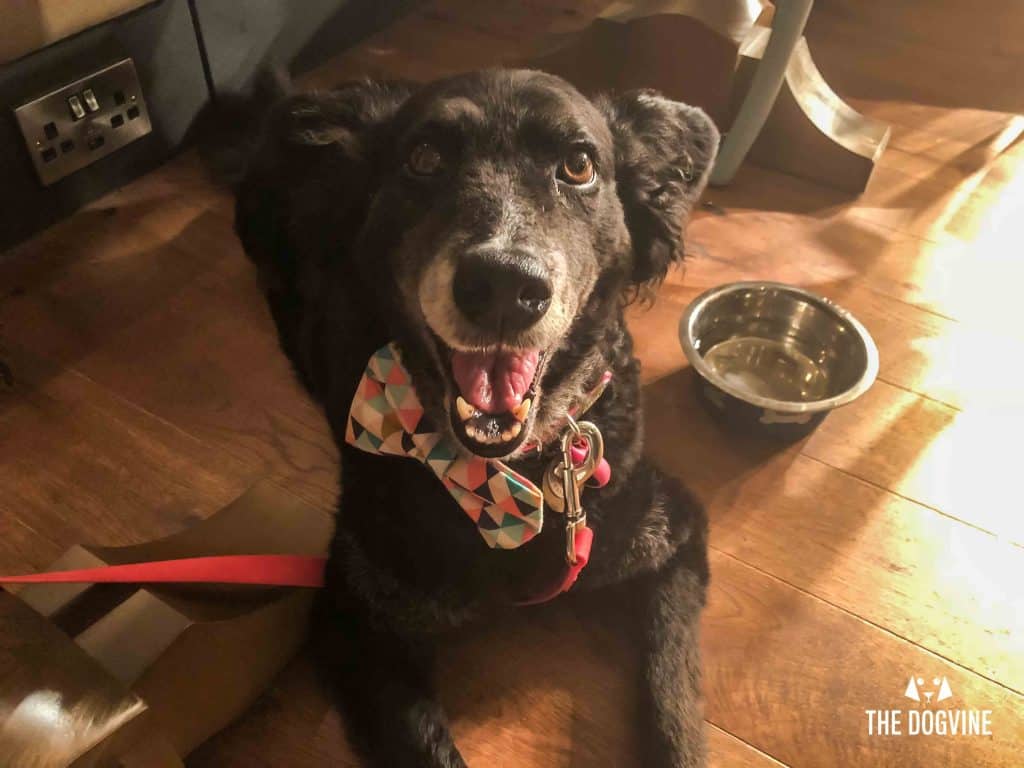 Apparently the owner of Megan’s has a dog called Dave who often pops in and that being dog-friendly is a must at Megan’s as everyone loves dogs. We immediately felt very much at home and it was clear that this was definitely a dog friendly restaurant rather than just a dogs allowed restaurant…so far so good!

Although it is a restaurant by night, the vision is for Megan’s by The Green to be a real neighbourhood hang out with people popping in for breakfast or brunch as well as catering to those who want a relaxed place to chill (or work) by day.

The water bowl outside Megan’s by The Green was definitely a dog-friendly giveaway. As soon we went inside, Belinha got lots of fuss from the staff and made herself comfortable. There was also plenty of space which is always a pooch plus from a doggo’s point of view. 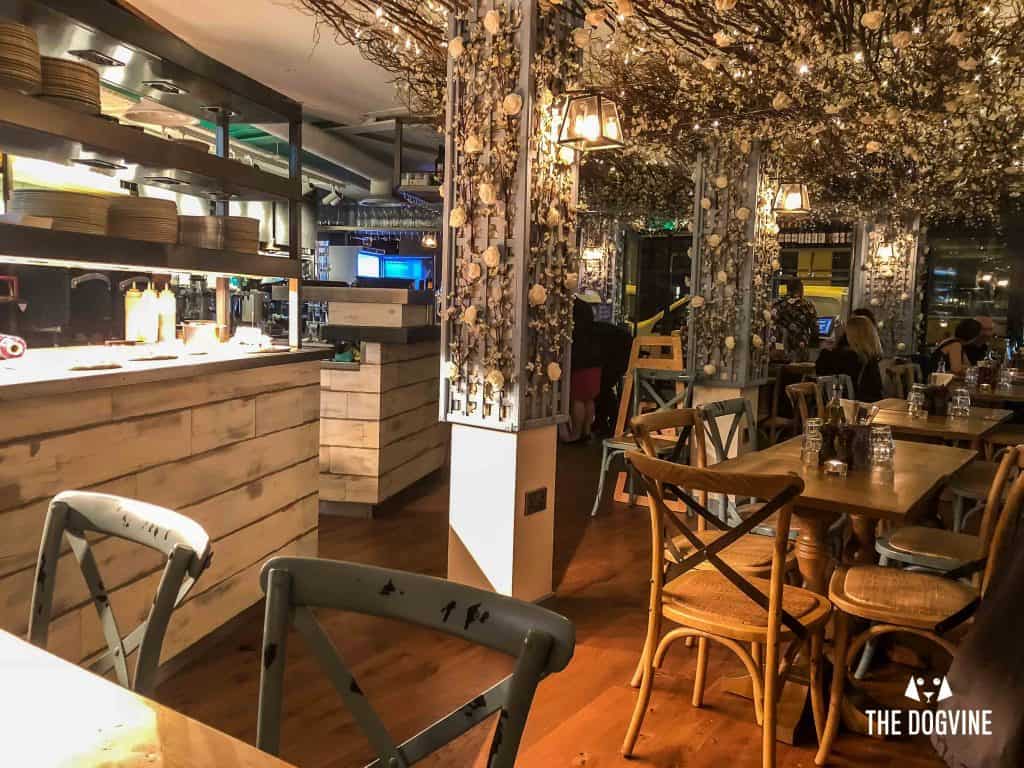 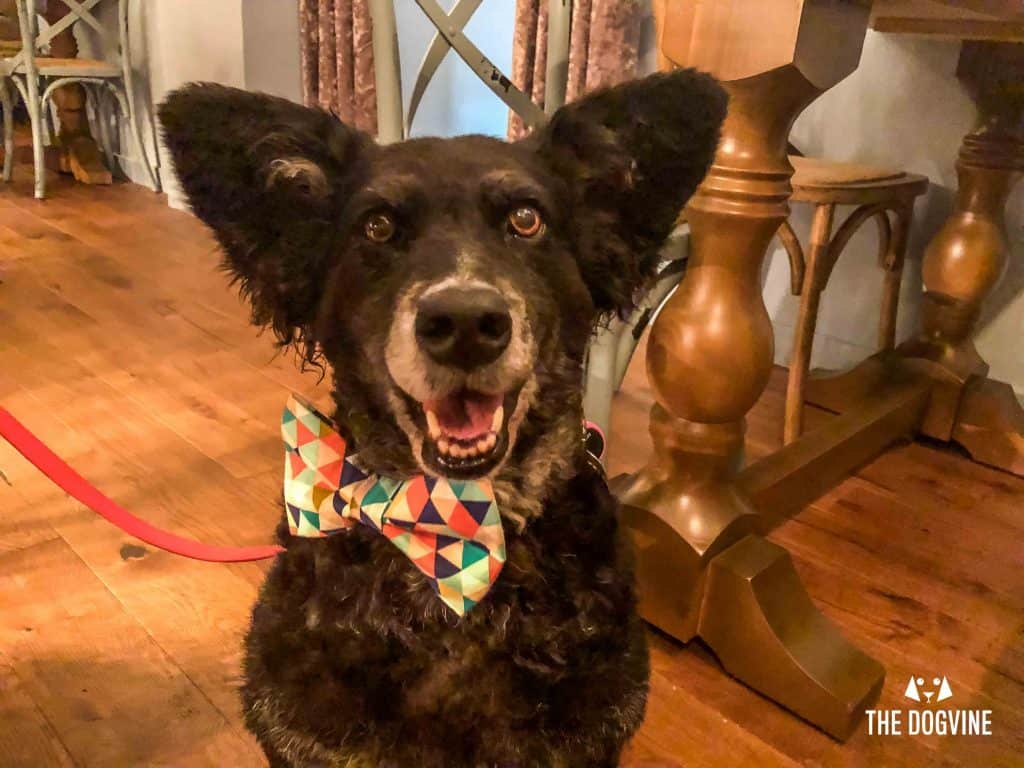 Of course being a restaurant, food was most definitely forefront of Belinha’s mind and preferably the human kind!

Fortunately (depending on whose point of view you take), Megan’s by The Green has dog treats available to placate your pooch seeing as they shouldn’t be getting their paws on the human menu…

Megan’s by The Green | What’s On The Menu

The menu at Megan’s by The Green is mostly mediterranean with a distinct Turkish influence. Think deconstructed kebabs and skewers, sharing boards, turkish inspired brunches and of course pizzas.

Being vegetarian I went for the halloumi skewers with roasted vegetables which I can honestly say was the most delicious platter of halloumi and vegetables I have ever had. 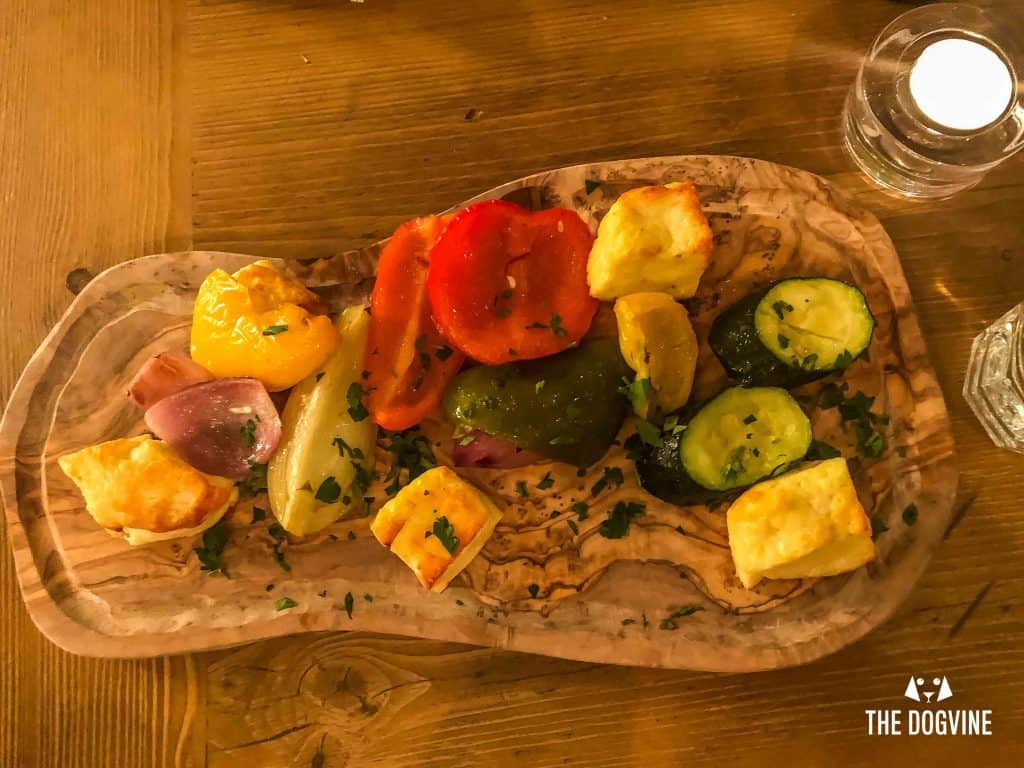 Peter tried the lamb deconstructed pan kebab with yoghurt and pistachio and was very impressed too. 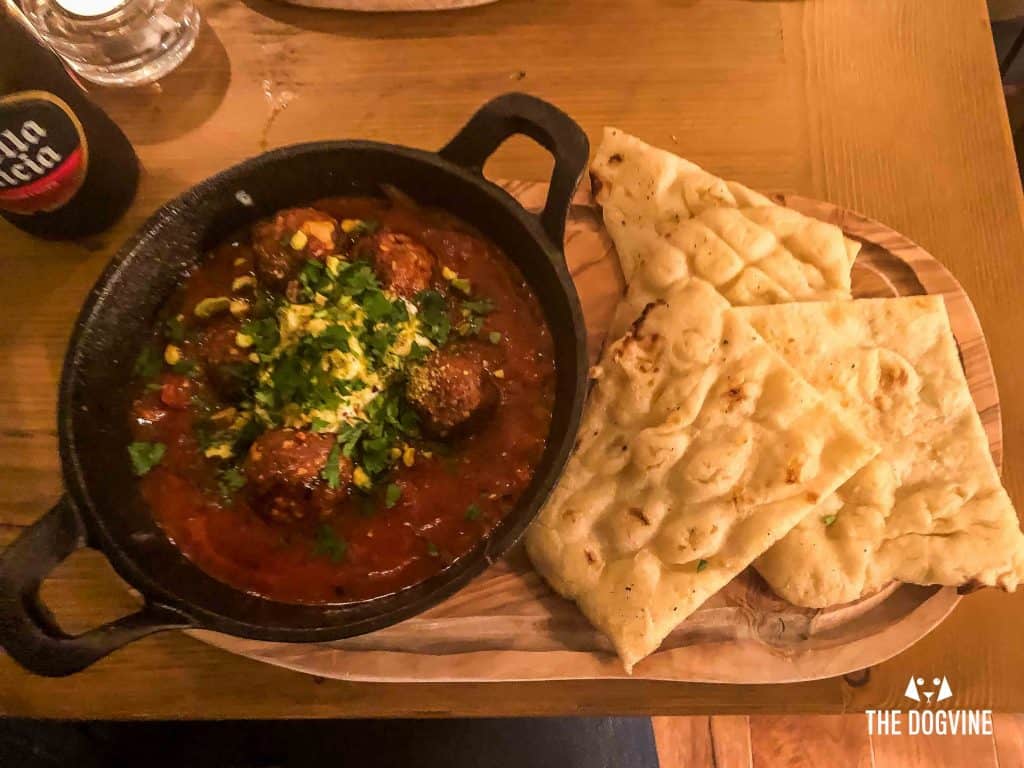 Of course we had to sample the desserts on the recommendation of Marianne (who is possibly the most friendly waitress in London), and oh my dog were we in for a treat. The warm half-baked cookie dough filled with Nutella and sprinkled with pistachios was to die for. In hindsight quite a lot for one person but that didn’t stop me eating it all. Whoever ever invented that dessert deserves an award! 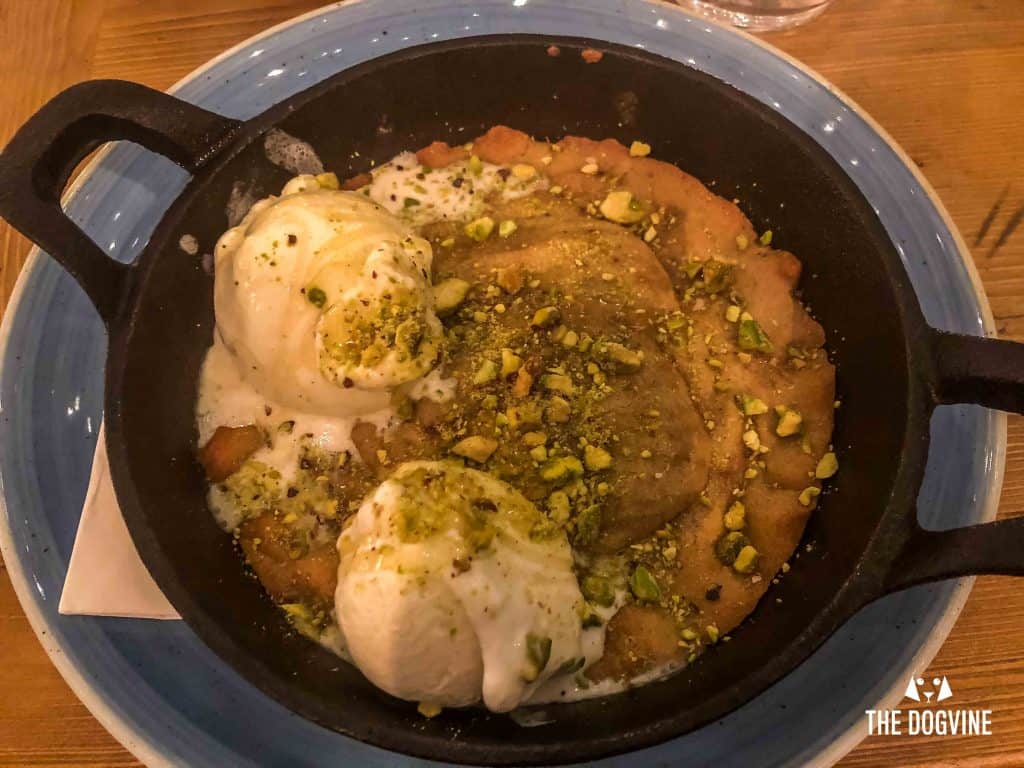 Even a simple chocolate brownie was made to look and taste fantastic with a zingy berry garnish complementing the rich chocolatey brownie perfectly. 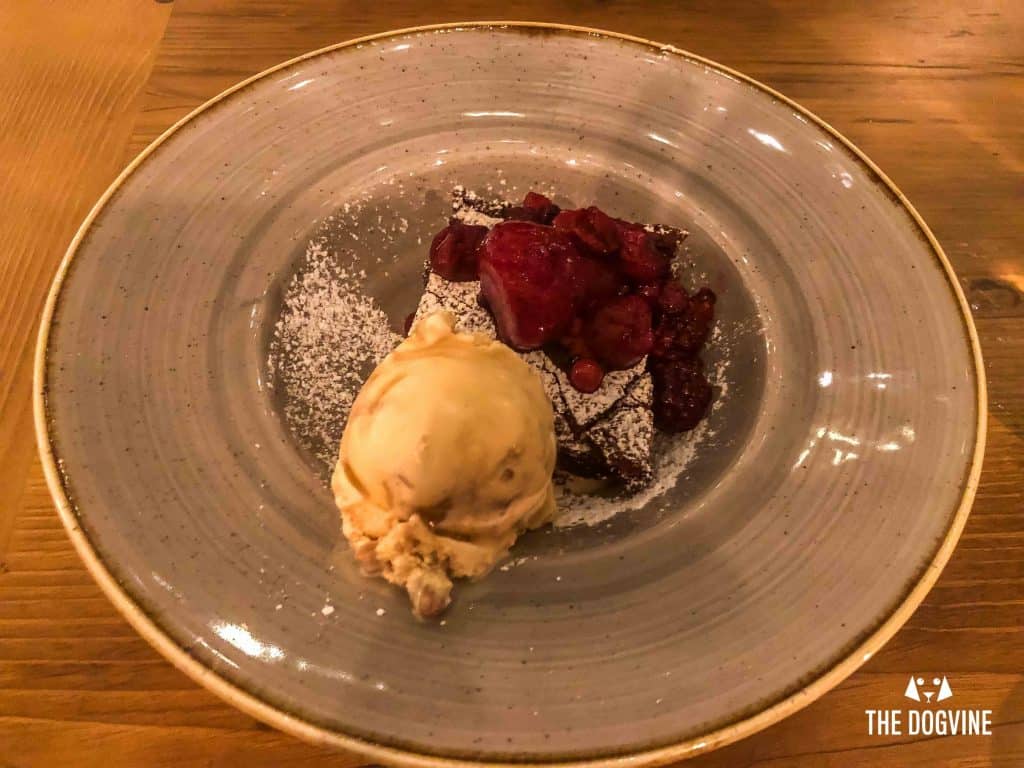 So is it a Paws Up for Megan’s by The Green?

Definitely! We had an absolutely pawsome evening at Megan’s by The Green and have no doubt that this will be a firm South London dog-friendly favourite with pups and humans alike. The staff are super friendly, they clearly love dogs and the food is ‘fur-bulous’. We’ve already been back twice for dinner and brunch, both of which were just as delicious as our first visit! 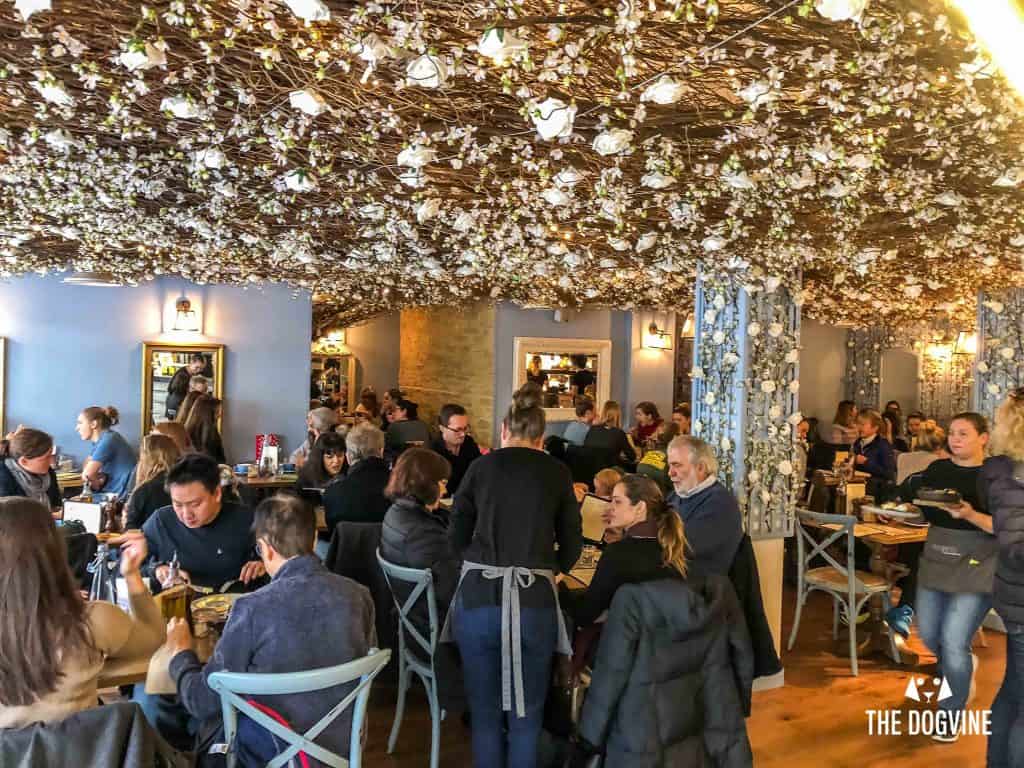 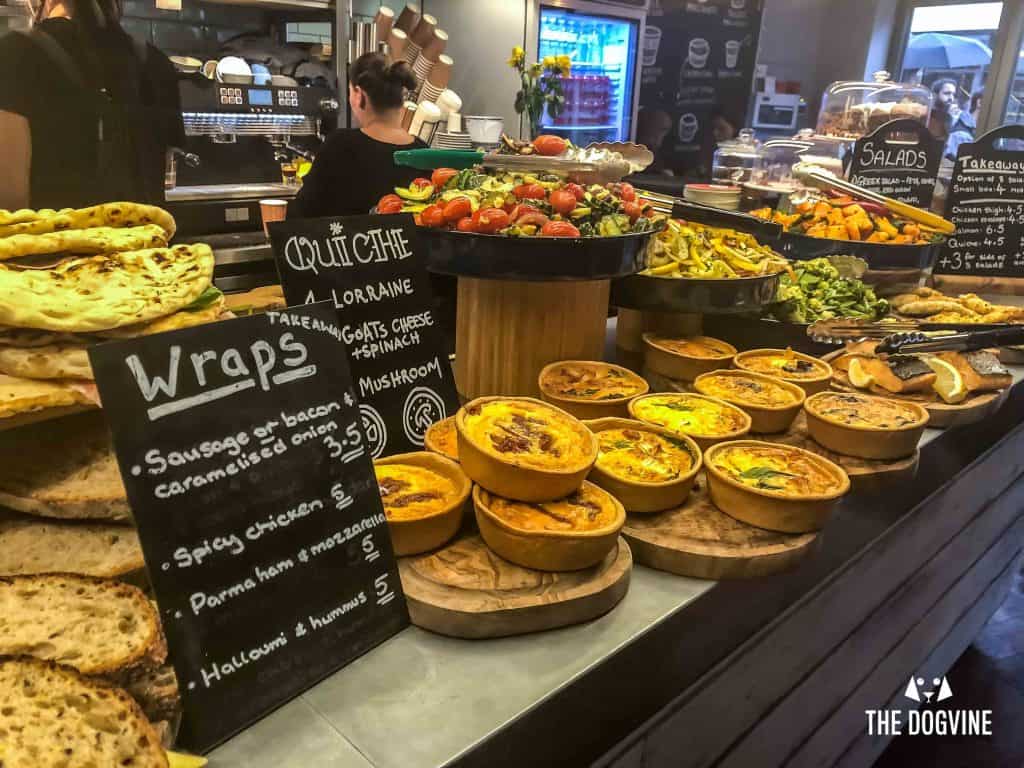 Still on the to-do list is to sample a few more of those amazing desserts! See you soon Megan’s by The Green! 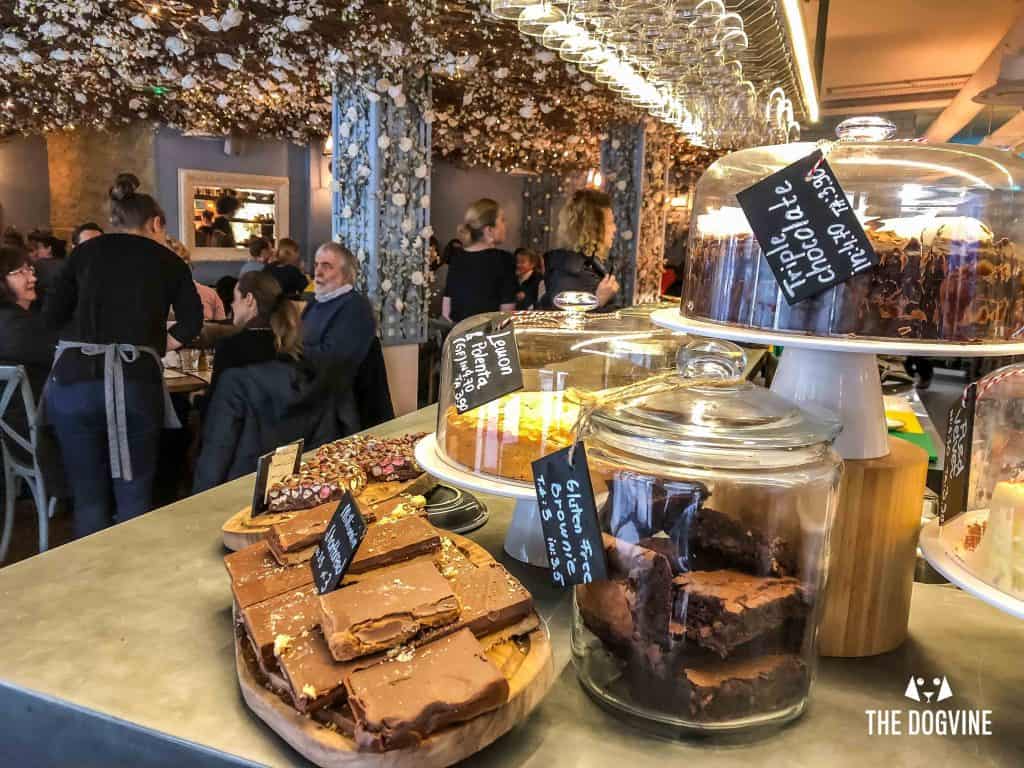 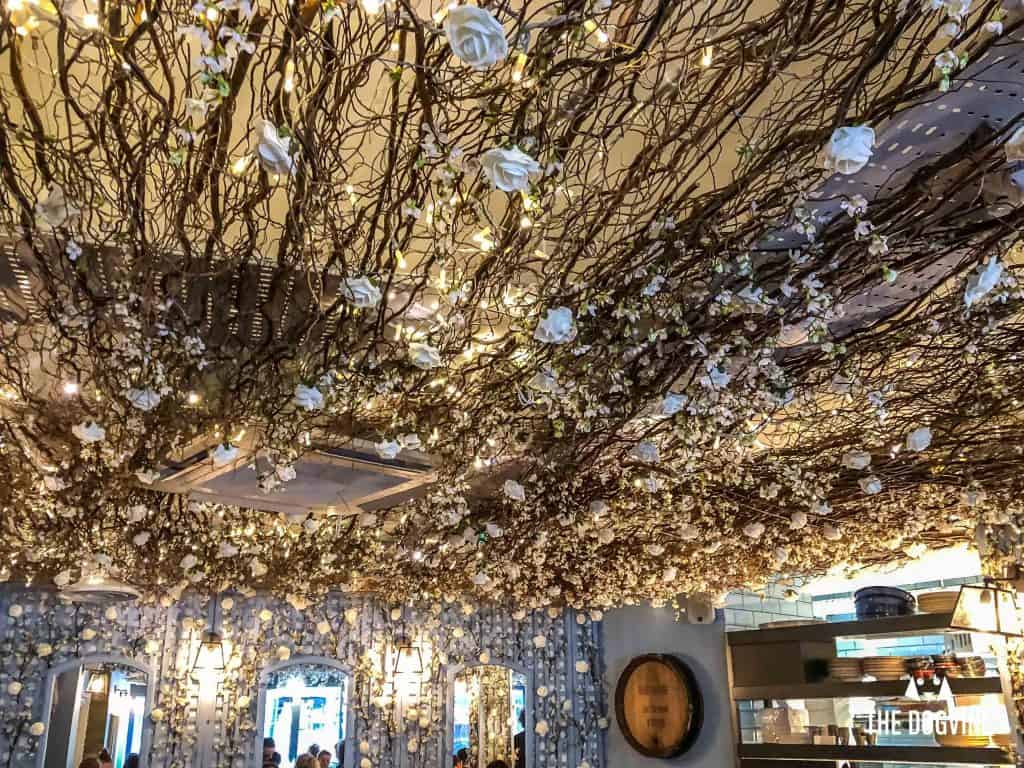 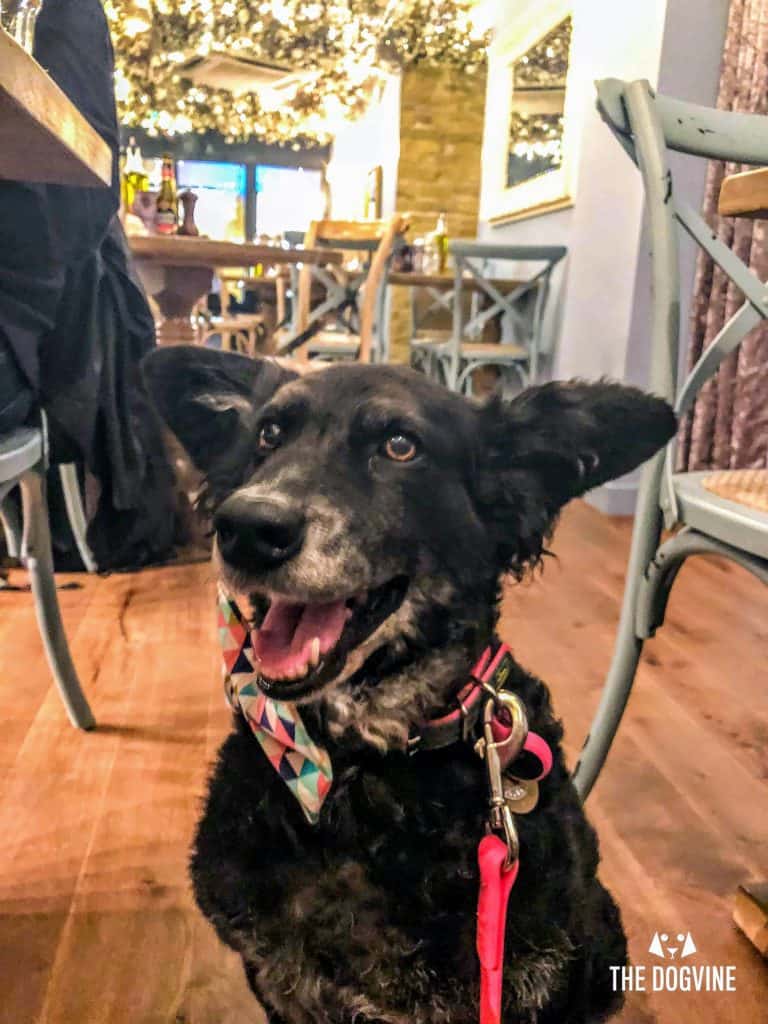 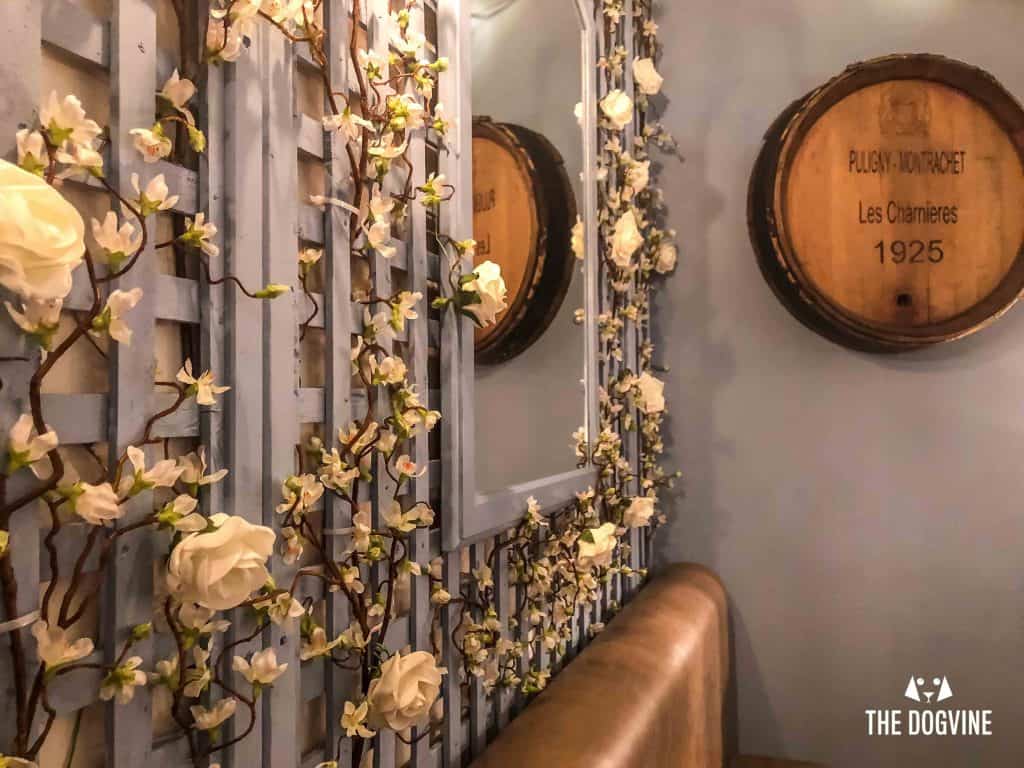 Megan’s by The Green is located at 57 Parsons Green Lane, SW6 4JA  (just a stone’s throw from Parsons Green Tube). Keep up with all things Megan’s on Instagram, Twitter and Facebook.