Four-year-old Staffie Lucky belongs to a London homeless man Gulbar Hussain who has an incredible bond with her, having had Lucky by his side since she was a puppy.  Recently, Gulbar and Lucky were crossing the street near London’s Portabello Road when a car came out of nowhere, hitting Lucky before speeding off. 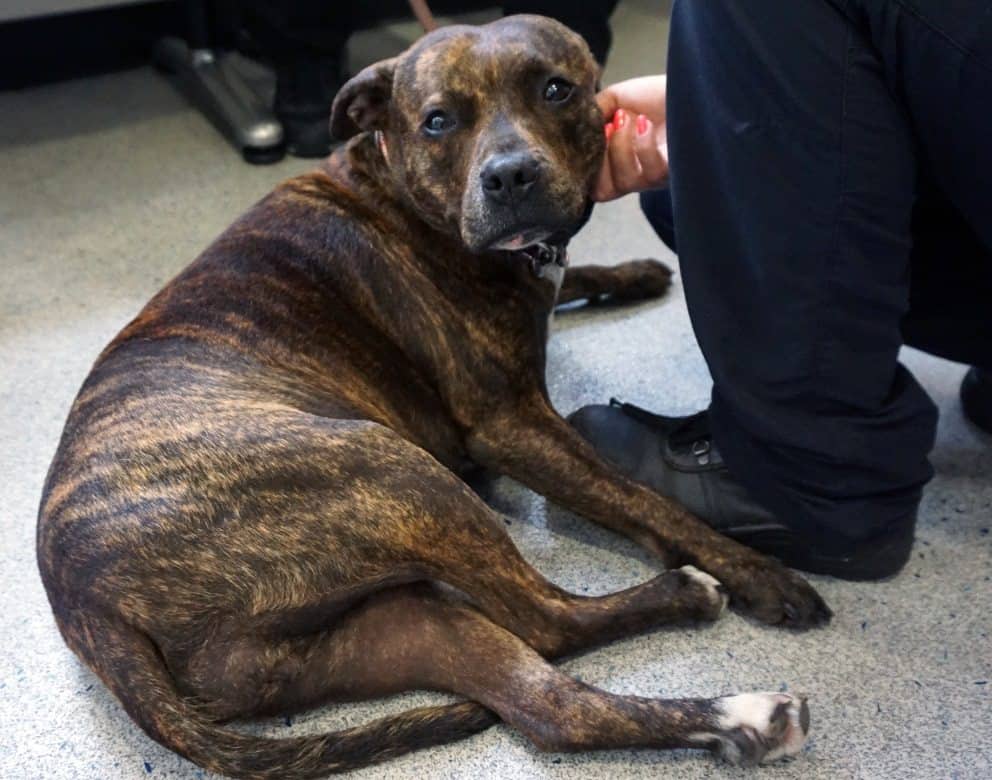 Lucky’s owner, Gulbar Hussain, said: “It all happened so fast. I had managed to get out of the way, but Lucky had no chance. The car didn’t even stop and quickly sped off. Who would do something like that? Hit a poor defenceless dog and leave them there to die. I was terrified. I’ve had Lucky since she was a puppy and she has always been by my side. The thought of not having her here scared the life out of me.”

Lucky was taken to be treated at the RSPCA Hospital in Putney and after initial x-rays were taken, Gulbar and Lucky were referred to The Mayhew Animal Home by which time Lucky was in a lot of pain and hardly able to move.

The Vet Team at The Mayhew diagnosed that Lucky had broken her hind right leg and fractured her pelvis. The Mayhew’s Vet, Áine Maguire, said: “We performed a femoral head and neck excision on her hind right leg, which is a procedure used to treat painful hip conditions. The surgery was successful and Lucky recovered well from the procedure. She had to be completely rested for a couple of weeks so that her fractured pelvis had time to heal. Poor Lucky seemed to suffer more from separation anxiety from being apart from her owner and would constantly cry for him.” 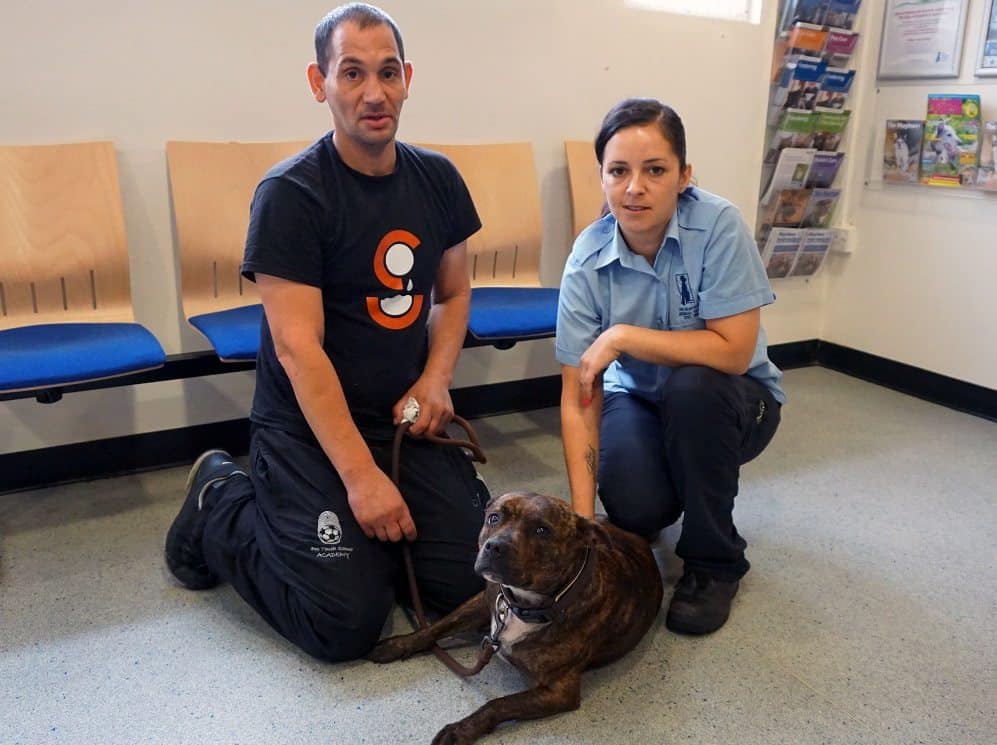 The Mayhew Animal Welfare Officer, Tania Mazzoni, said: “It is extremely clear that Lucky is very important to Gulbar and vice versa. When Lucky had to stay with us for three weeks to recover, Gulbar would visit constantly and bring in food for Lucky – they were inseparable! A dog is often a homeless person’s only companion and they create this incredible bond. Lucky and Gulbar would be lost without each other and that’s why it is so important we try and keep them together.”

After her treatment and lots of rest, we’re pleased to hear that Lucky is now back up on her paws and back by her beloved owner’s side….it seems that Lucky is a very apt name for this pup!

None of this would have been possible without the ‘suppawt’ of the Animal Welfare Officers and Vet Team at The Mayhew. They covered all the costs of Lucky’s veterinary treatment and also do tremendous work through their community-based outreach projects, visiting homeless hostels and drop in centres such as Thames Reach, Broadway Homeless Hostel and Drop in Centre, Spitalfields Crypt Trust and St Mungo’s.

Homeless dog owners can benefit from support advice from The Mayhew Animal Team including free health checks, vaccinations, neutering and micro-chipping. They also know that if their pets become sick or injured, The Mayhew Animal Welfare Officers will take their pet to the Community Vet Clinic to receive free treatment.

The Mayhew is able to offer these essential community outreach programs and help hundreds of animals in need like Lucky, through the much-needed support and donations from the public.

The Mayhew’s Animal Welfare Officers rescue neglected, abused and abandoned animals and work with communities to prevent issues arising in the first place. They also deliver a range of educational projects to tackle irresponsible ownership and provide support to pet owners in difficulty. The Mayhew also has a vet clinic on site which offers affordable preventative veterinary treatments, including neutering, microchipping, vaccinations and dental care.