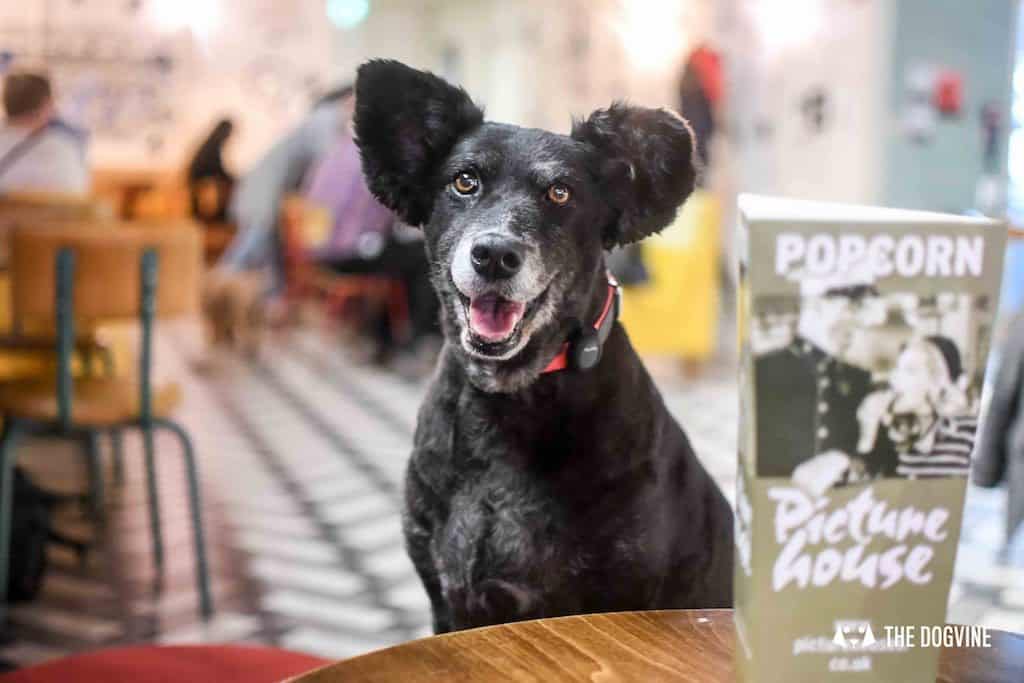 Nestled in the heart of the West End, this retro looking cinema is colourful and welcoming on the inside. There is a fantastic foyer and cafe/restaurant area for humans and hounds to hang out before or after the film. The food options were good (with plenty of vegetarian options) and the cakes looked delicious. In fact it’s the kind of place, I would go and hang out anyway when in the area and plenty of people seemed to be doing just that. 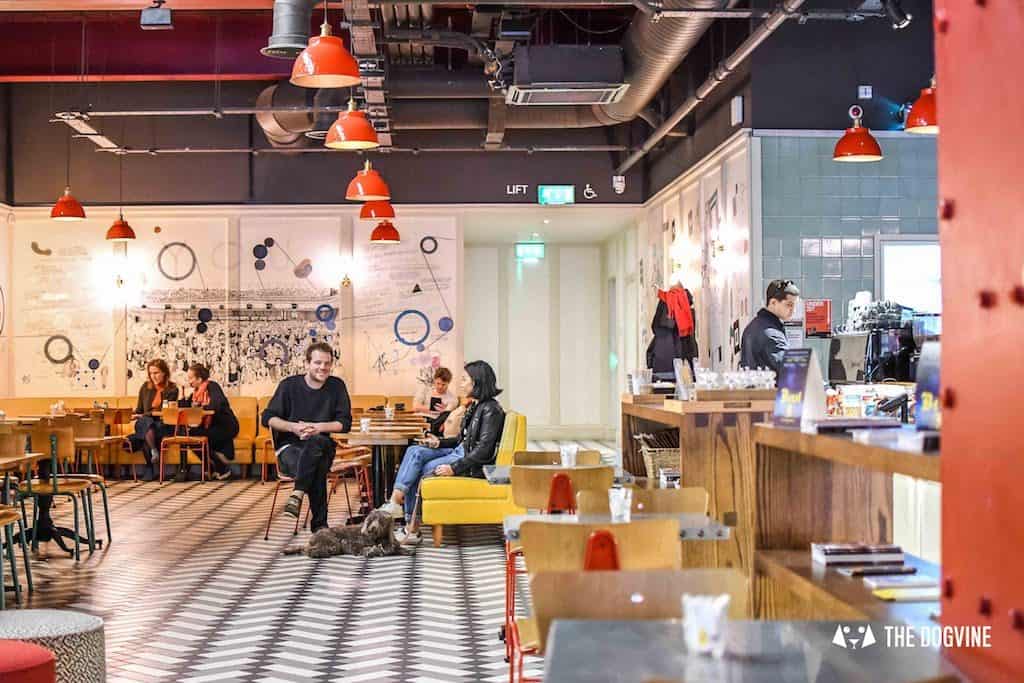 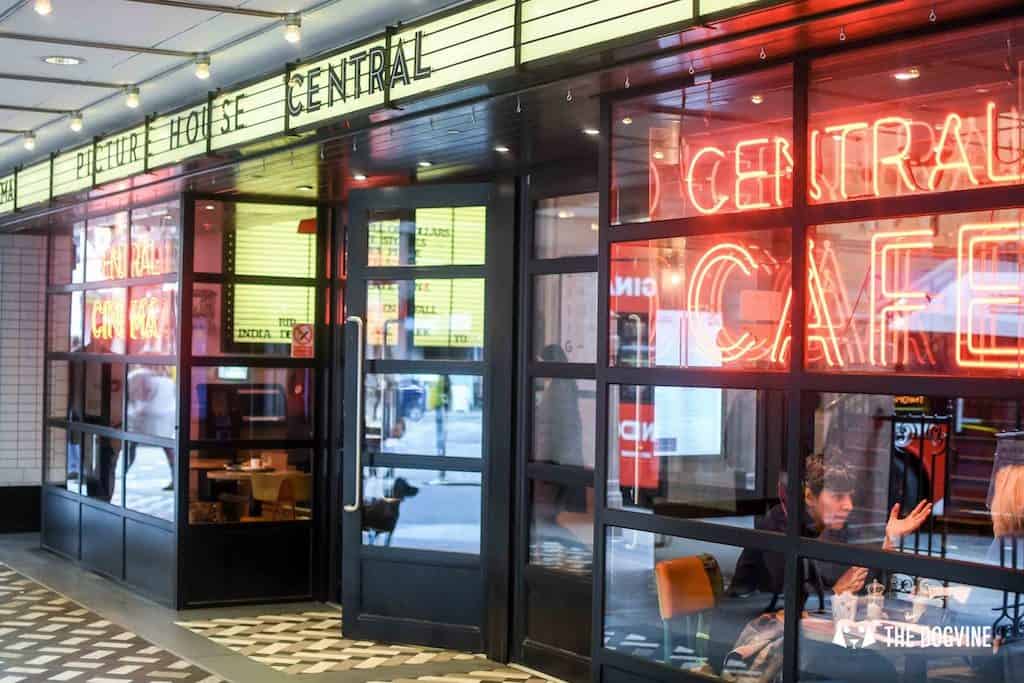 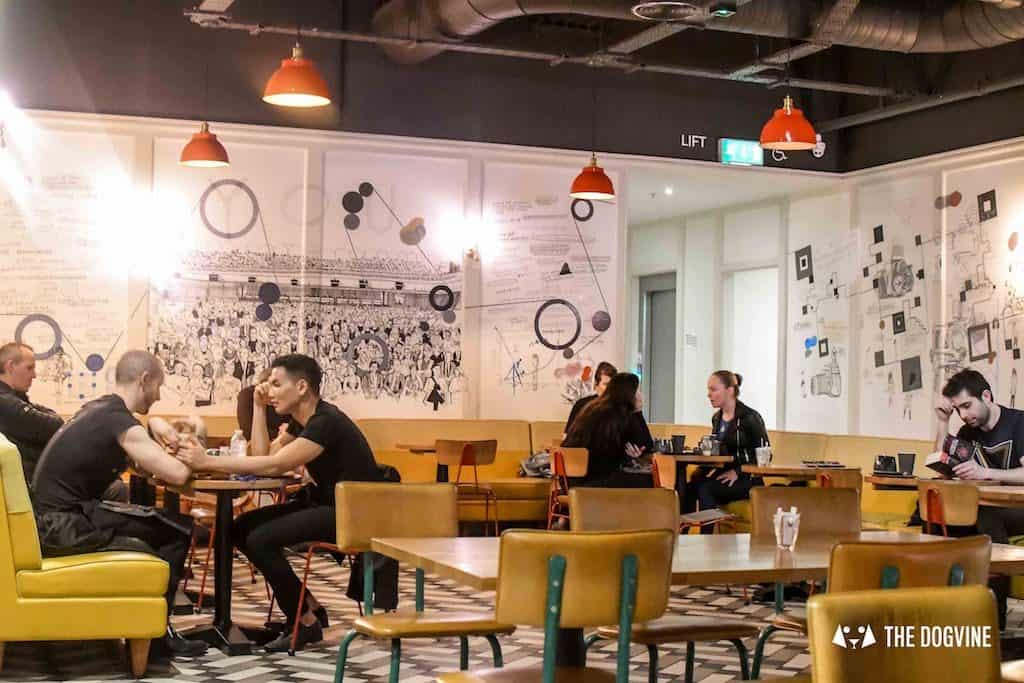 The actual cinemas are upstairs. As expected in a cinema, at this level you can stock up on some popcorn (no pupcorn just yet but we wouldn’t be surprised if that’s on the menu soon), before heading into the cinema which is up another level. This is accessed normally by an escalator but the staff made sure to direct all dog-owners to the lift option for doggos that were too big to be carried as doggy paws and escalators don’t really go together as we all know. 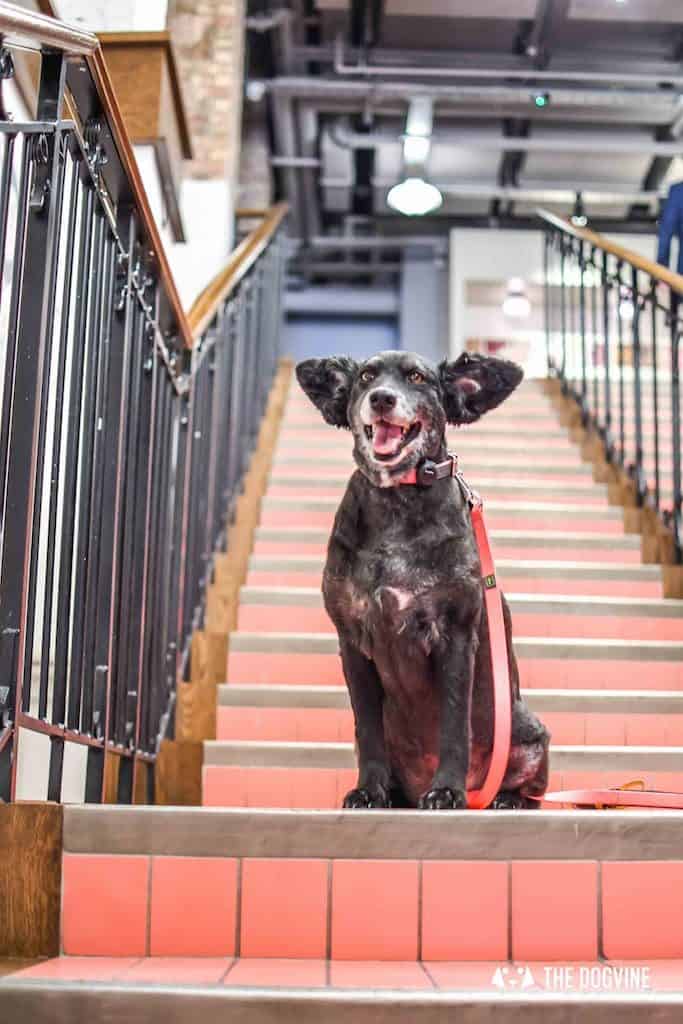 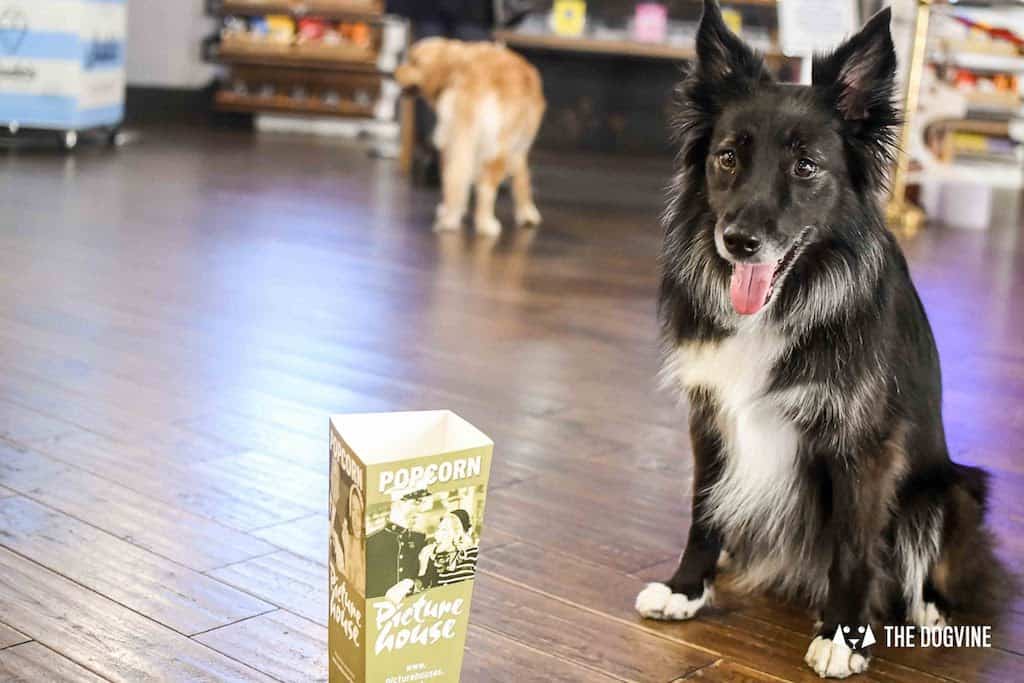 Keeping hydrated is super important, especially going into Summer. Fortunately doggy water bowls are on offer all over the cinema for pups to re-hydrate, both in the foyers and in the cinema where there was a long row of them in the aisles. 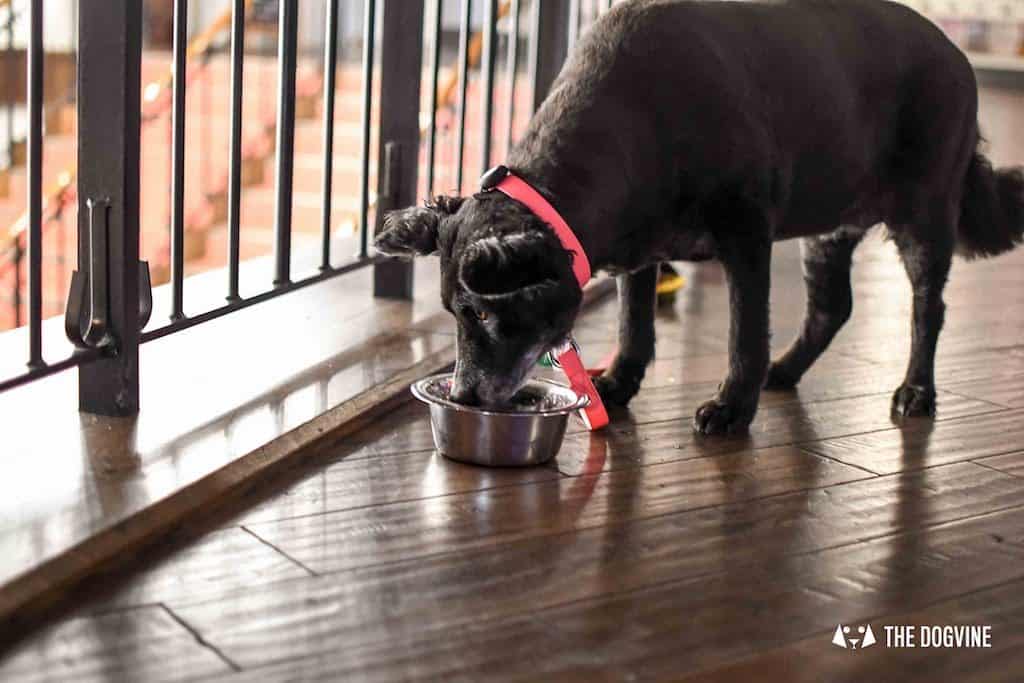 Dogs get their own seat to watch the film (but can also sit on laps of course) and don’t need to buy a ticket. Blankets are provided to cover the seats so that doggy hairs are left behind for the next cinema goer who may not be expecting a dose of doggy hair with their popcorn. The cinema staff did kindly let us take a picture of Belinha on the seats without the blanket as an exception but that is not the norm. 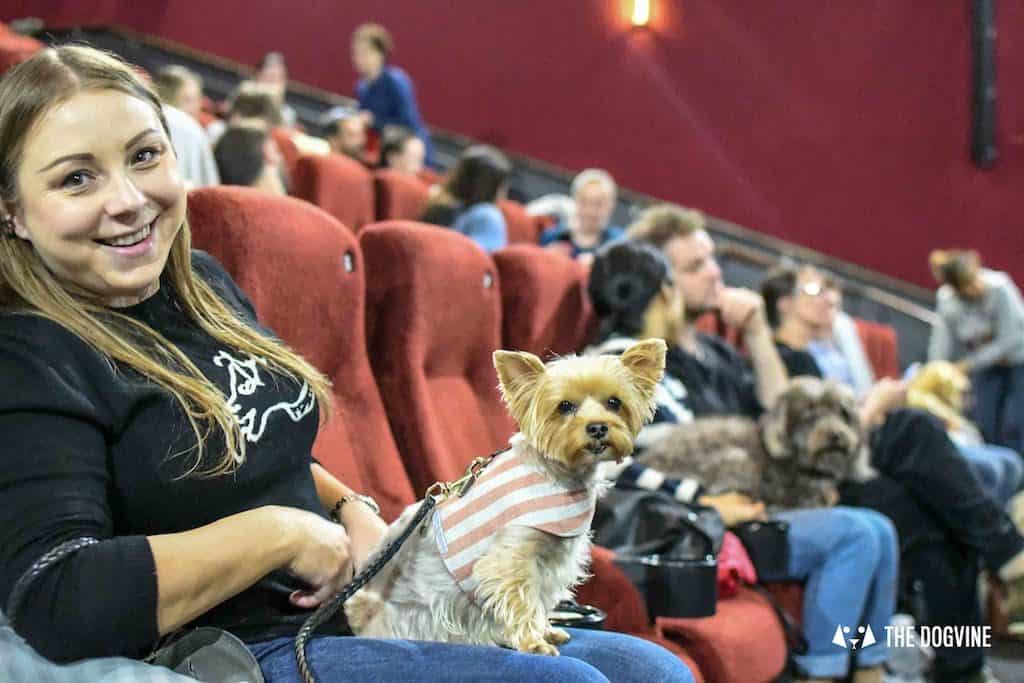 The seats are obviously built for humans so sitting up was fine for Belinha (who is a medium, 20 kg sized-dog) but when lying down it was a very close fit and she ended up with her head balancing on the lap of the very nice man in the next seat for most of the film. Dogs can of course lie on the floor so if you have a larger dog, then definitely go for one of the seats at the front or side aisles so your dog can stretch out on the floor. 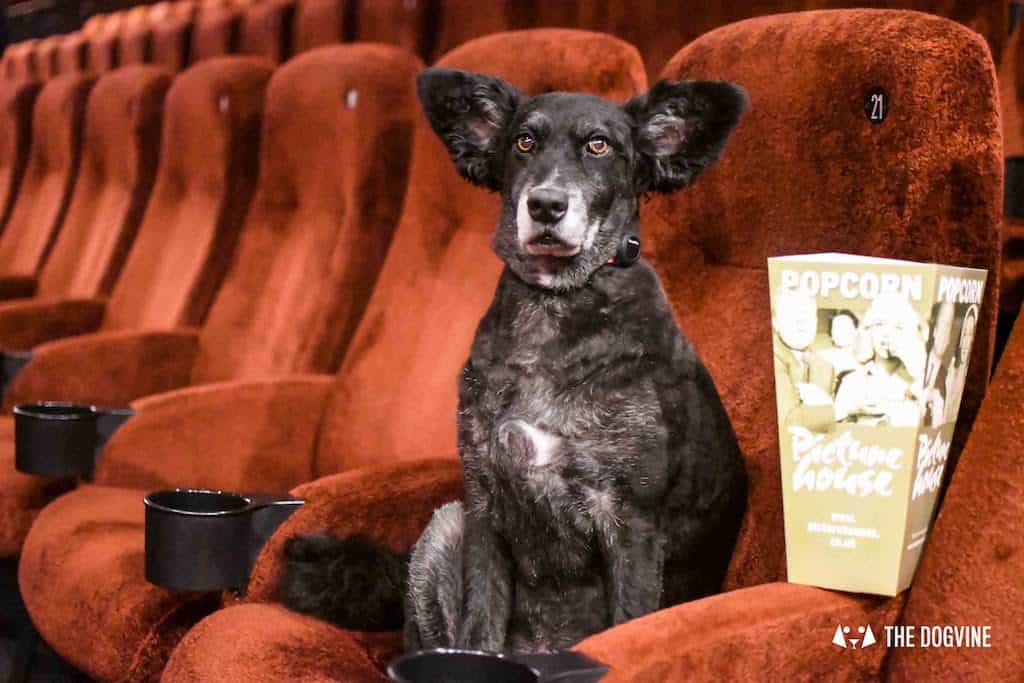 This was not our first dog-friendly cinema screening having been to the dog-friendly cinema at Whirled Cinemas in Brixton as well as Picturehouse Clapham, but the novelty had definitely not worn off and there was a definite air of excitement and delight from everyone there at having their pup with them. Chatting to Picturehouse Central General Manager Kathryn Smith, Kathyrn told us that the dog-friendly screenings had surpassed expectations in terms of popularity with visiting TV crews from overseas even coming to see what all the fuss was about. 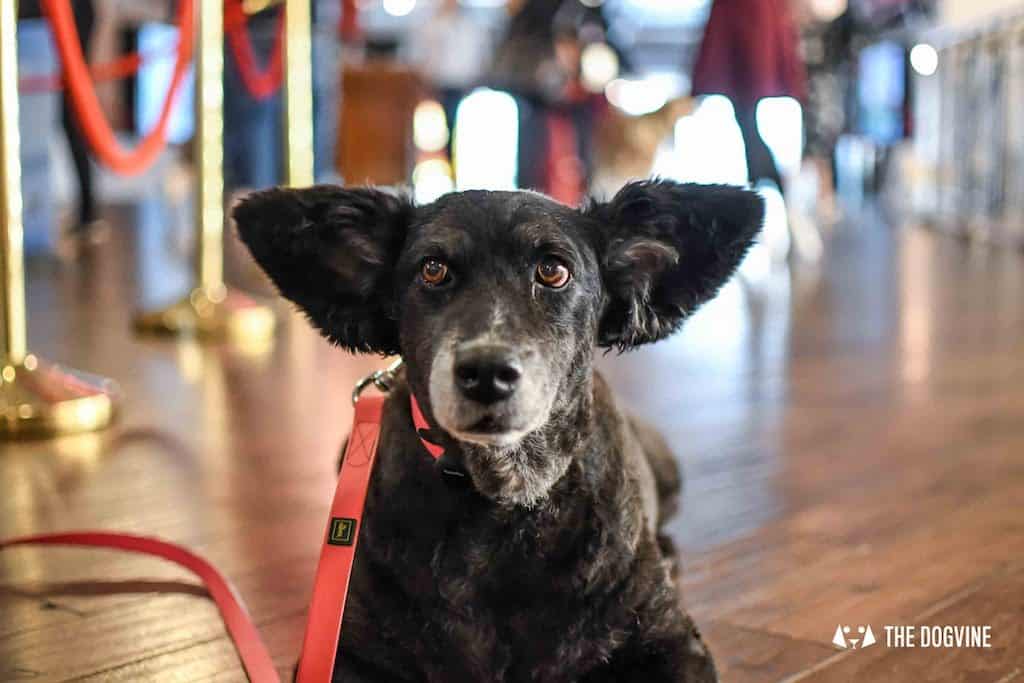 When we’ve posted about dog-friendly cinema screenings on social media, some people have asked the question about sound as dog’s hearing is so much more sensitive than humans. The Picturehouse Central Dog-Friendly Cinema Screenings are carefully selected to be films that are ‘dog-friendly’ (think less loud noises and bangs) and the volume is also reduced for these screenings. We certainly only saw relaxed and chilled doggos during the film.

The excitement wasn’t just for the humans but also for the hounds with lots of wagging tails (and bum-sniffing)but not a single growl (apart from when the dogs growled on-screen which made everyone smile). Here’s a quick video so you can get the idea…

Some had even put on their Sunday best outfits for the occasion. During the film, all the pups seemed to just sit back, relax and enjoy the film just as the cinema intended. I even caught Belinha genuinely watching what was happening on the screen at a couple of points in between snoozing. 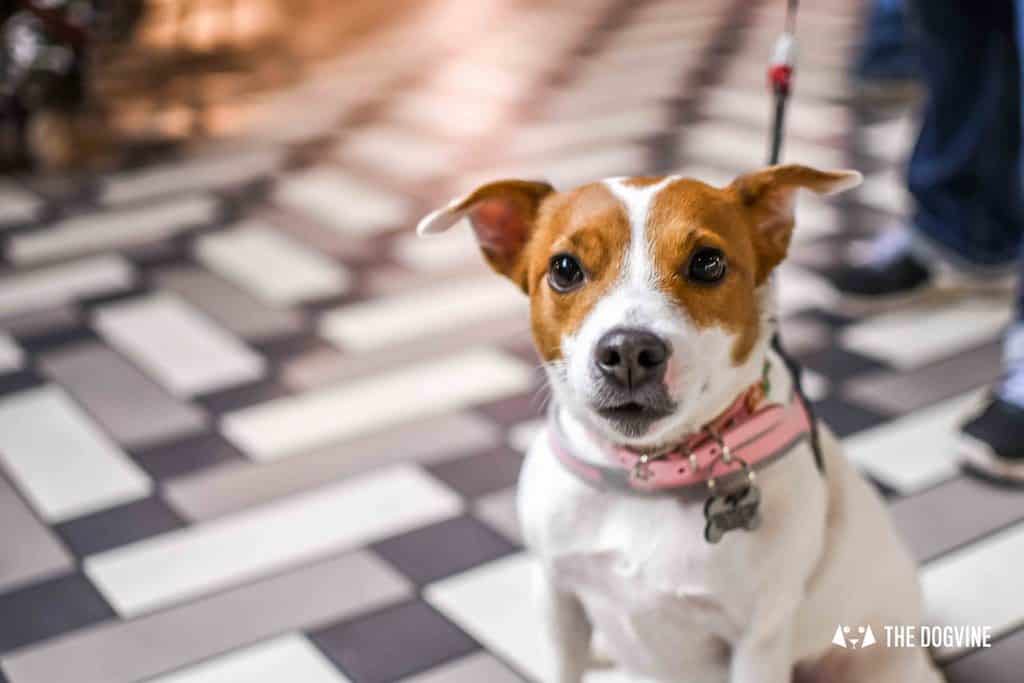 And as usual when you put lots of humans and hounds in one place, the usual British reservedness goes out the window and within minutes you’re talking to complete strangers, united by one thing…our love of doggos. Probably not the main intention of the Picturehouse Dog-Friendly Cinema Screenings but a very nice bonus nevertheless. 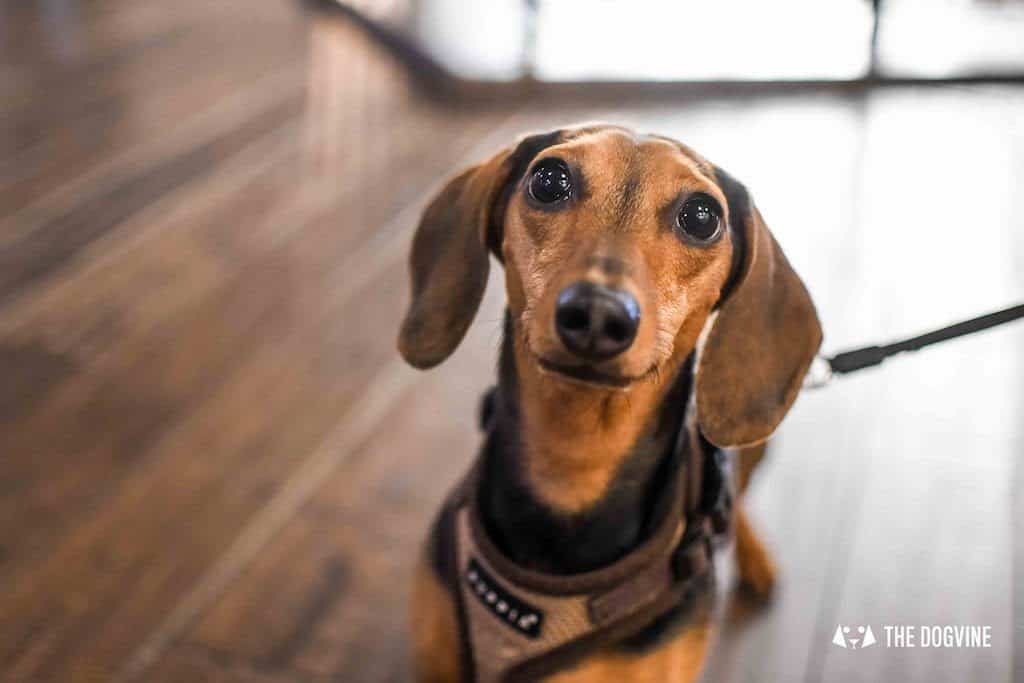 So Was It A Paws Up for Picturehouse Central Dog-Friendly Cinema?

Absolutely, the venue as a cinema alone is gorgeous. From a dog-friendly perspective it’s well suited to being a dog-friendly cinema (but not too large to not feel the independent cinema and intimate vibe). Plus as the Picturehouse Central Dog-Friendly Cinema Screenings have been a regular thing for over 10 months now, the cinema is clearly a pro at this. If you haven’t been already, you need to go and if you have, we’re pretty sure all the dogs would agree that you’ll be going back. 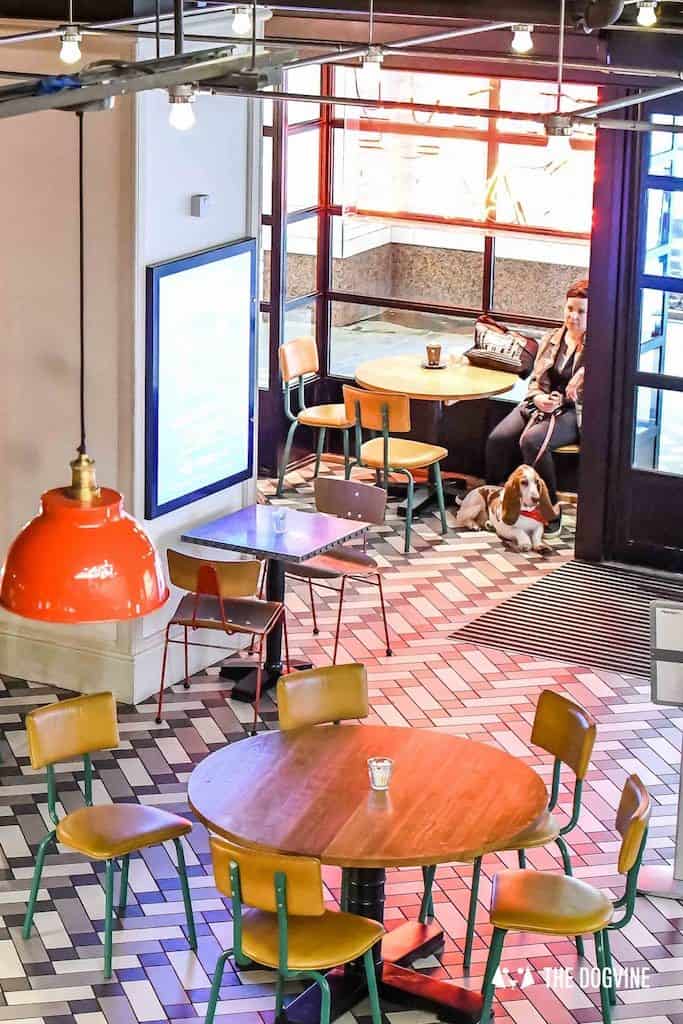 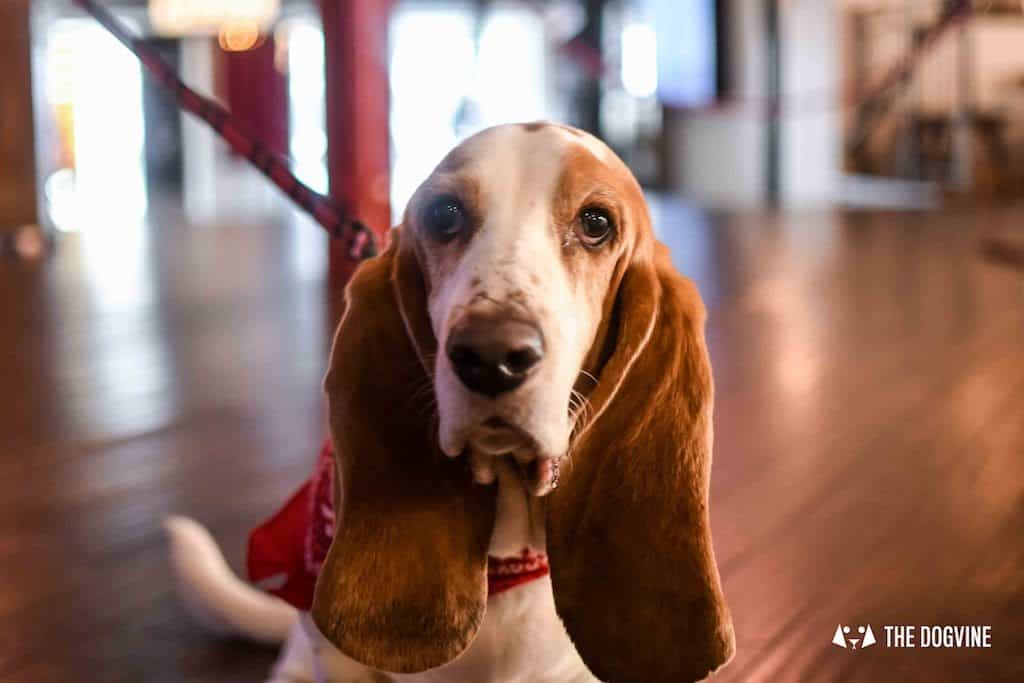 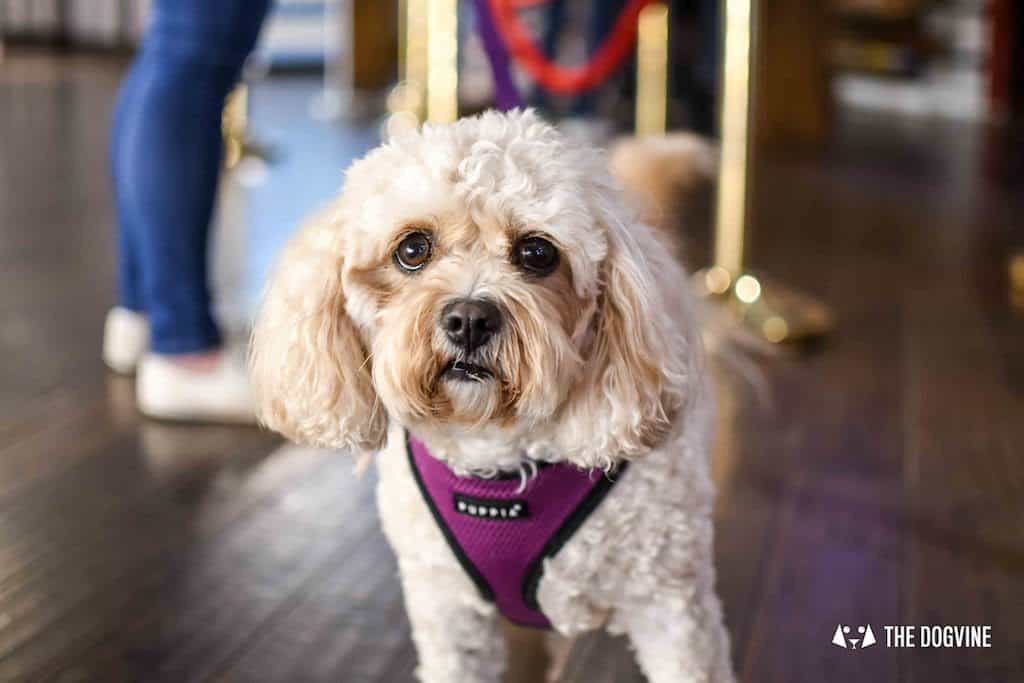 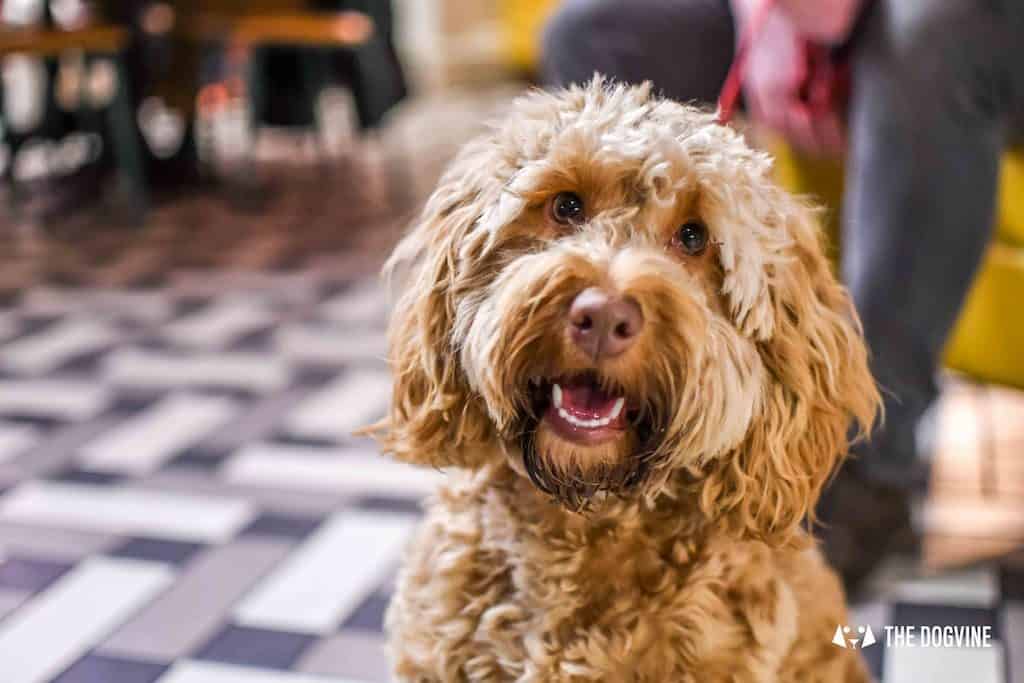 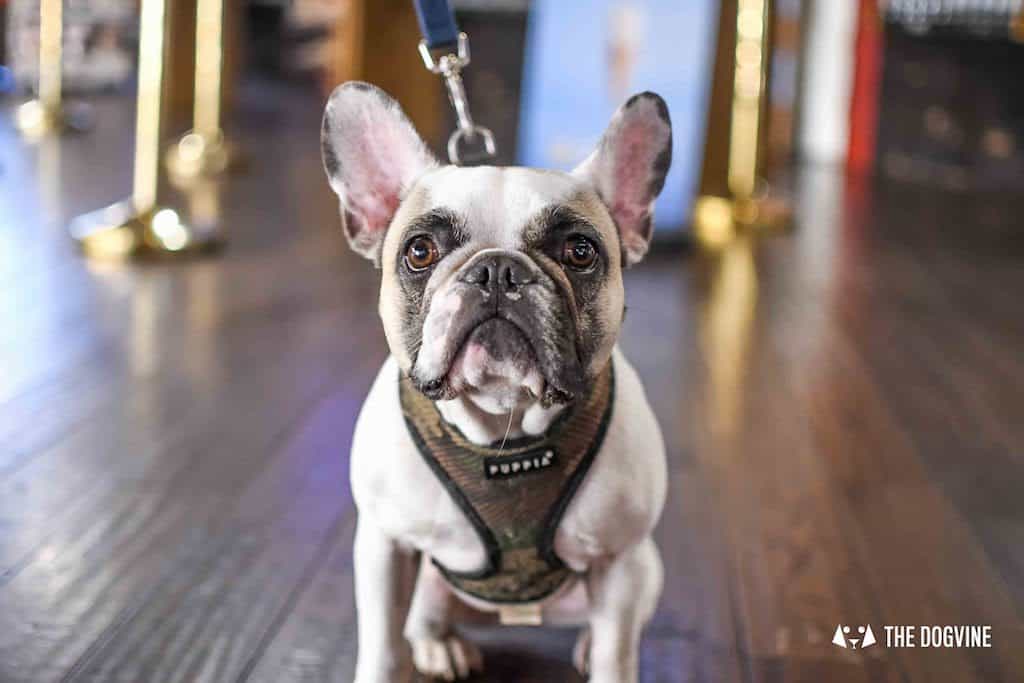 The Picturehouse Central Dog-Friendly Cinema dog-friendly cinema screenings take place approximately every six weeks. The popular films do sell out quickly so make sure you get your paws on a ticket when the dates are released. We’ll of course be listing them on our London Dog Events Calendar as well as our Facebook, Insta and Twitter so make sure to follow us to be in the know.

Photos will be up over on our Facebook page as well soon.