Dogs of all breeds and sizes took to the streets for a ‘pawlitical’ march last weekend to bark for their rights in the anti-Brexit Wooferendum March. If you’re wondering what it’s all about, you can find out all about the Wooferendum in our special Wooferendum March feature published last week. 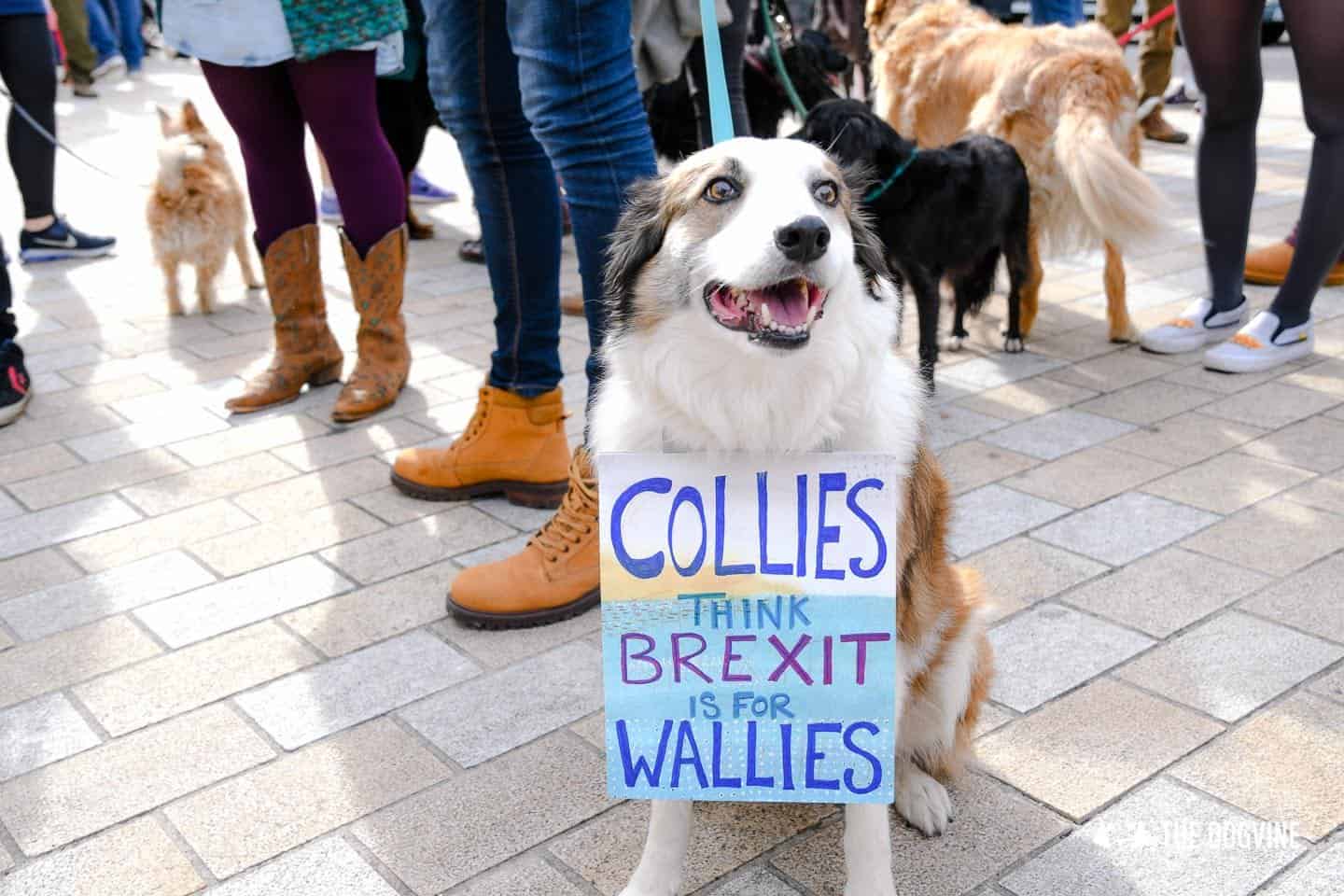 If you happened to be passing by Waterloo Place on Sunday afternoon you would have seen the unusual sight of hundreds of dogs, ready to bark out that they are not ready for the changes for pets that Brexit may bring. Both humans and hounds had thoroughly got into the spirit of things with enough EU themed outfits and pun-filled banners to get the message across, loud and clear. 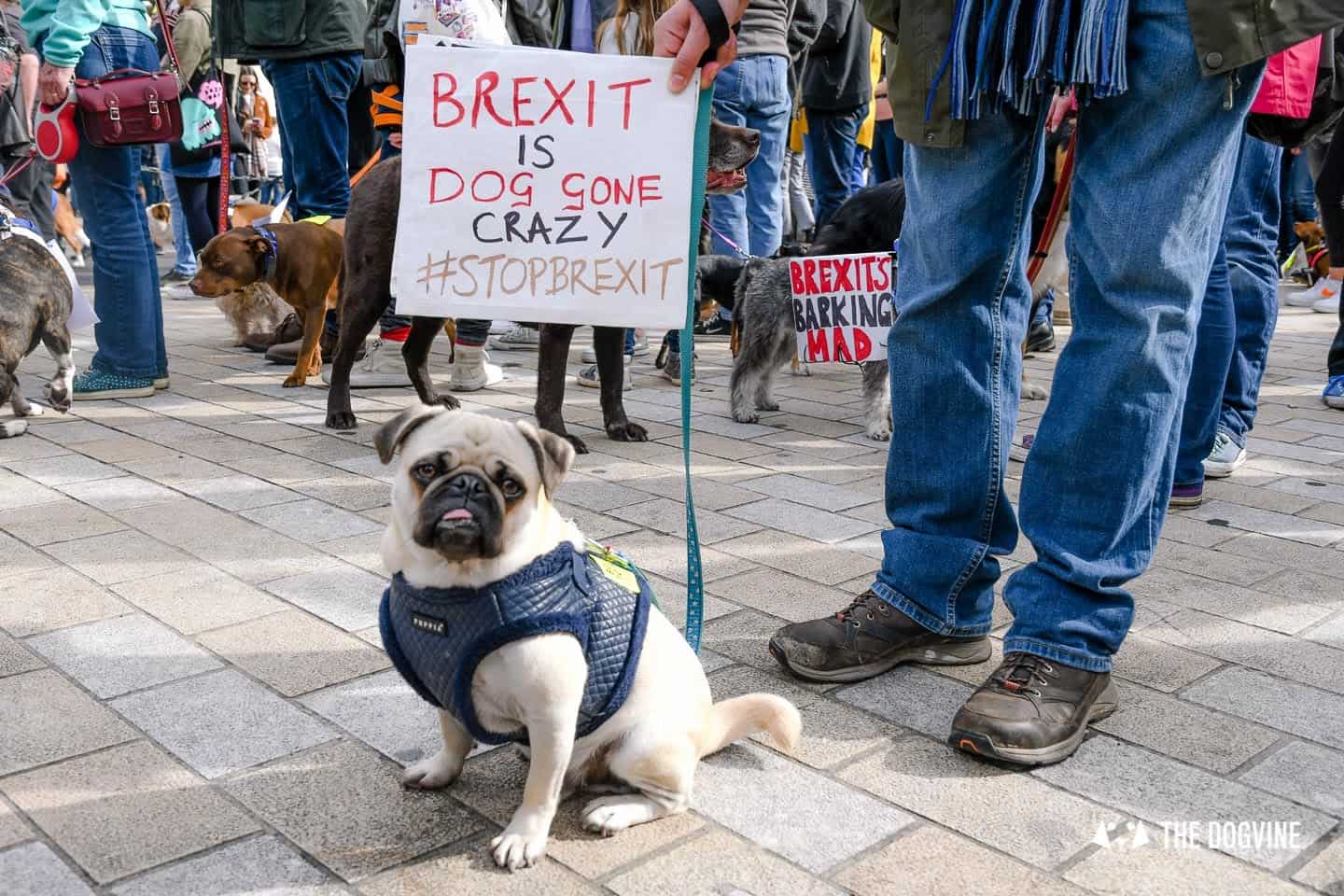 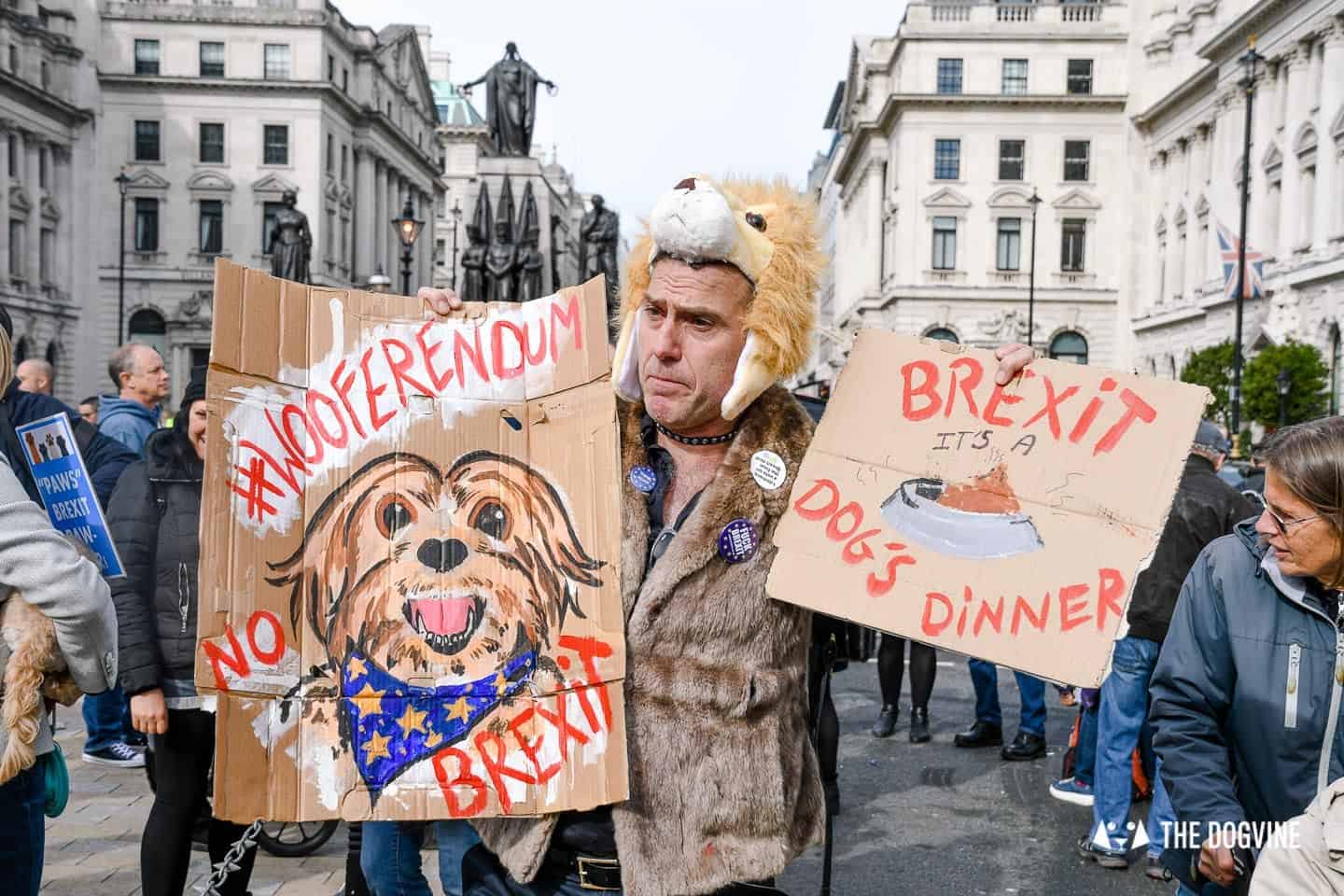 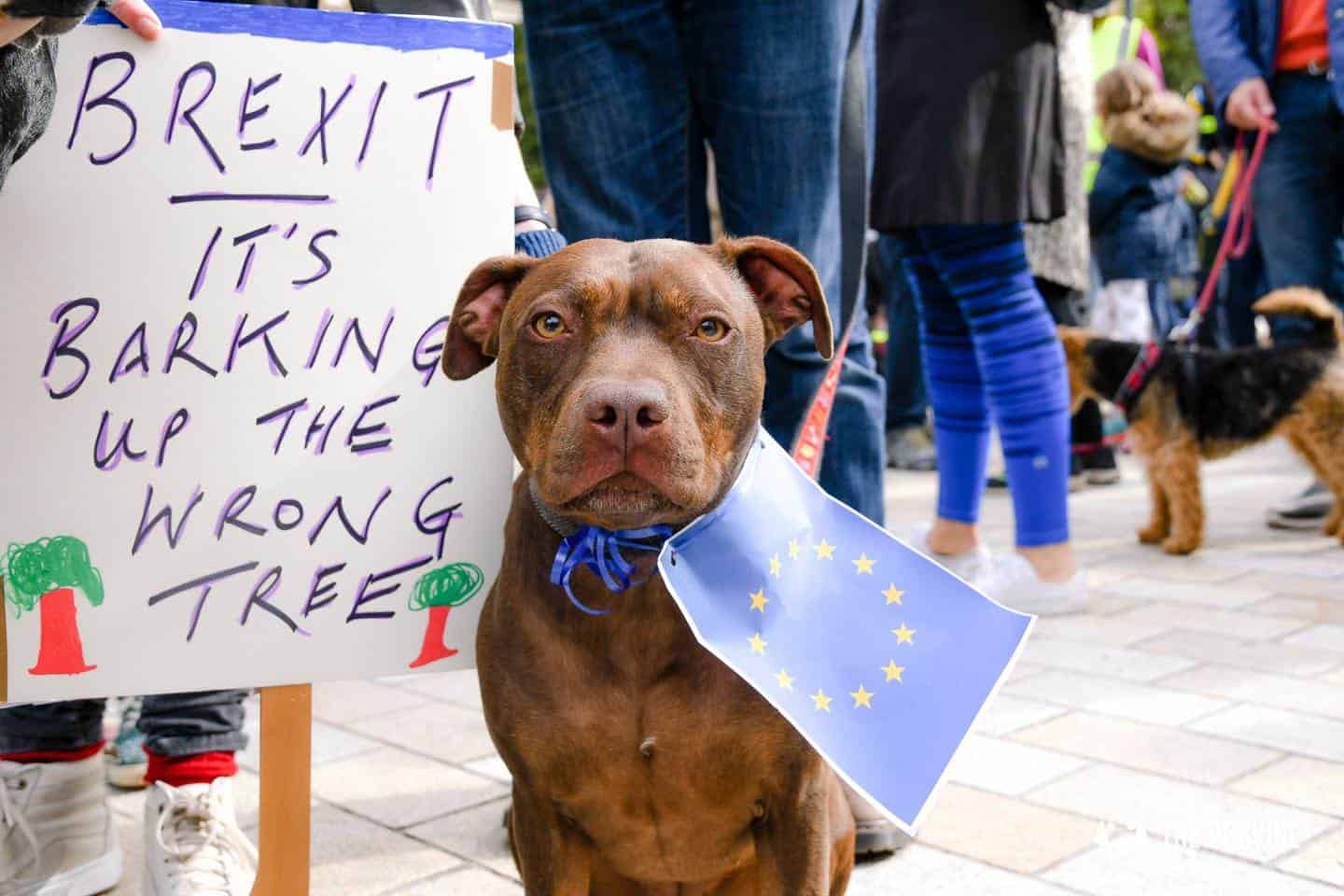 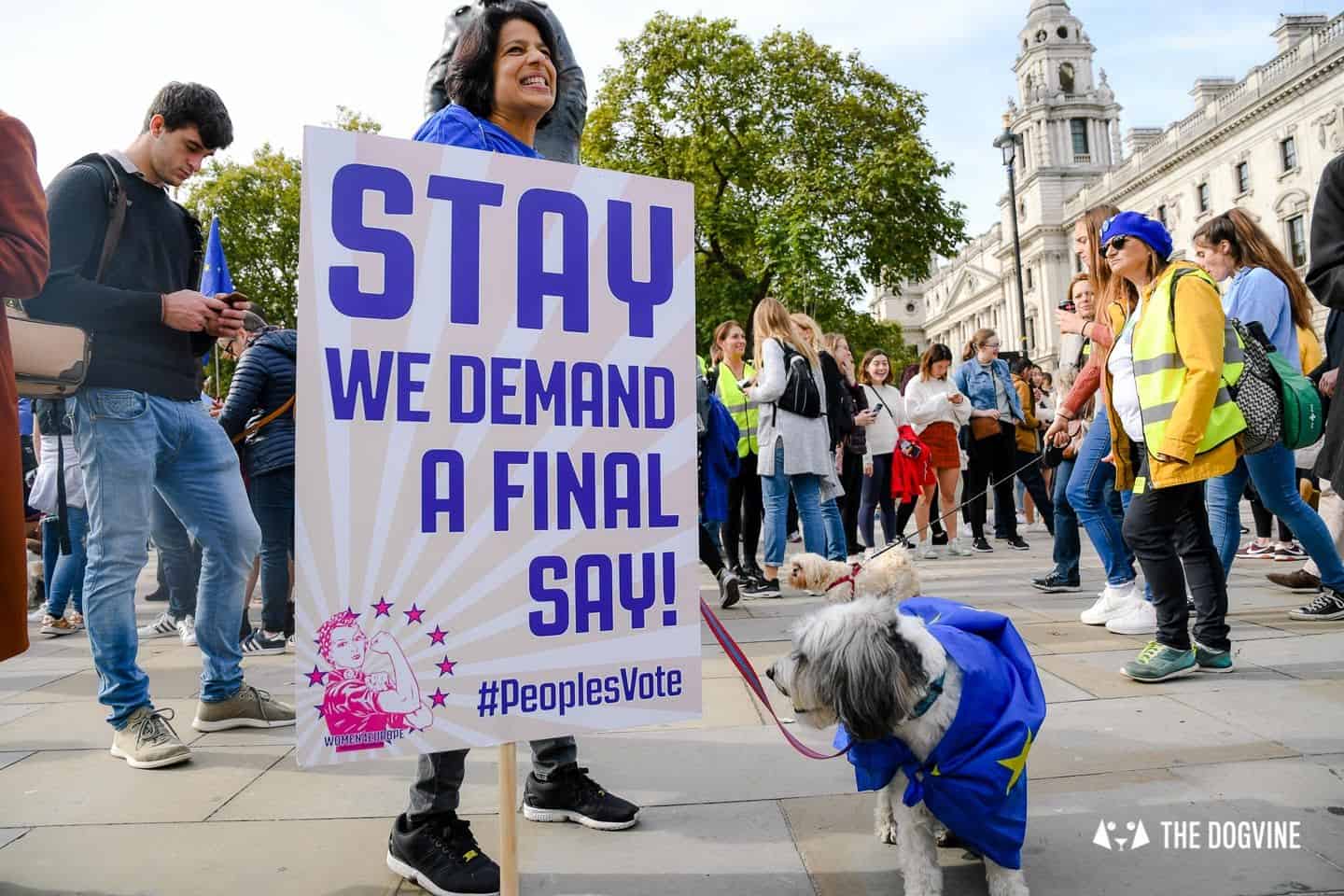 Dogs (and humans) didn’t hold back in how they chose to express themselves but the message of the day was that they clearly think…‘Brexit is Barking Mad’. 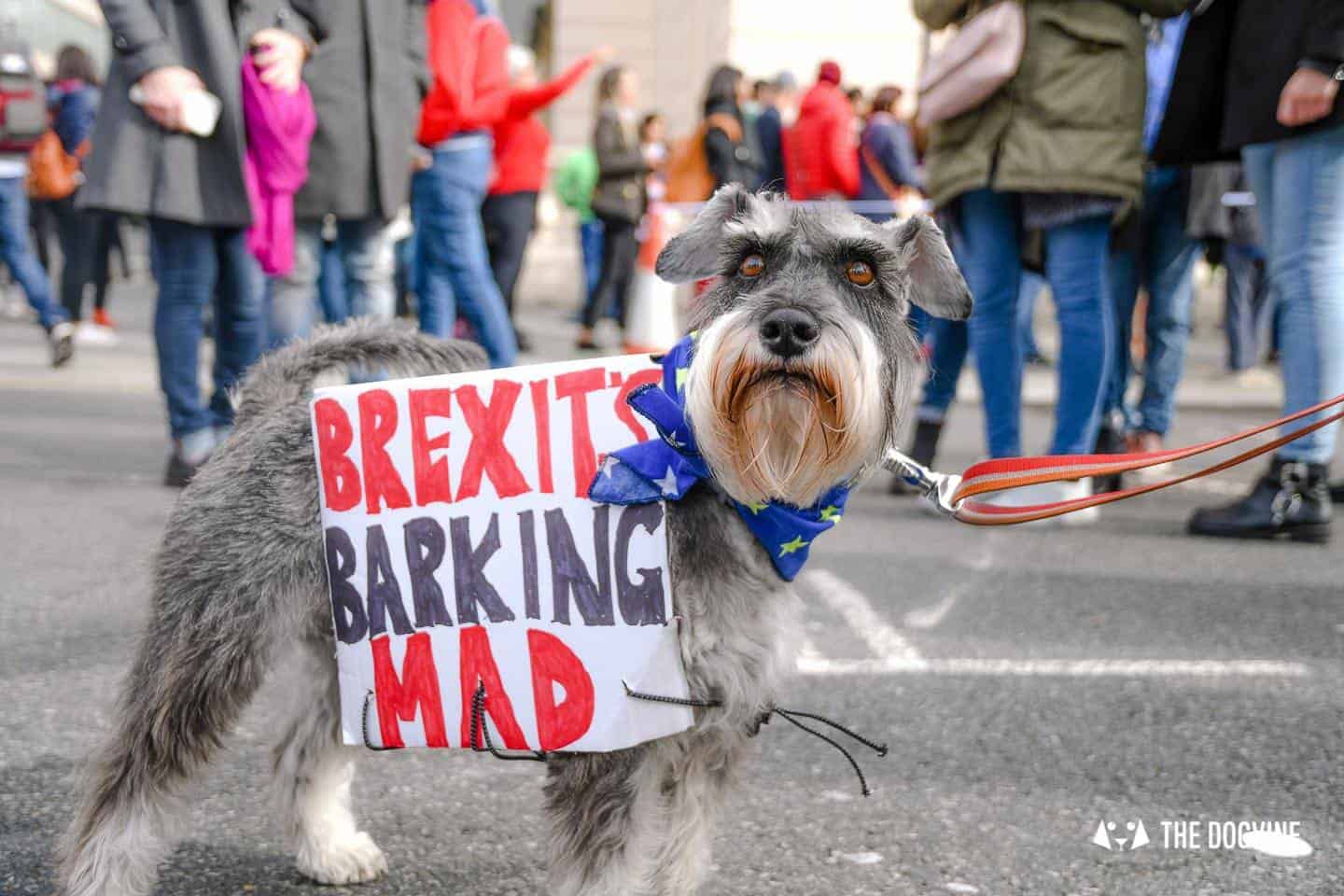 In reality, for dogs the highlight of the event (apart from the multitude of butt sniffing opportunities the meeting point and the Brexit Wooferendum March presented) were undoubtedly the free treats kindly on offer from Lily’s Kitchen. 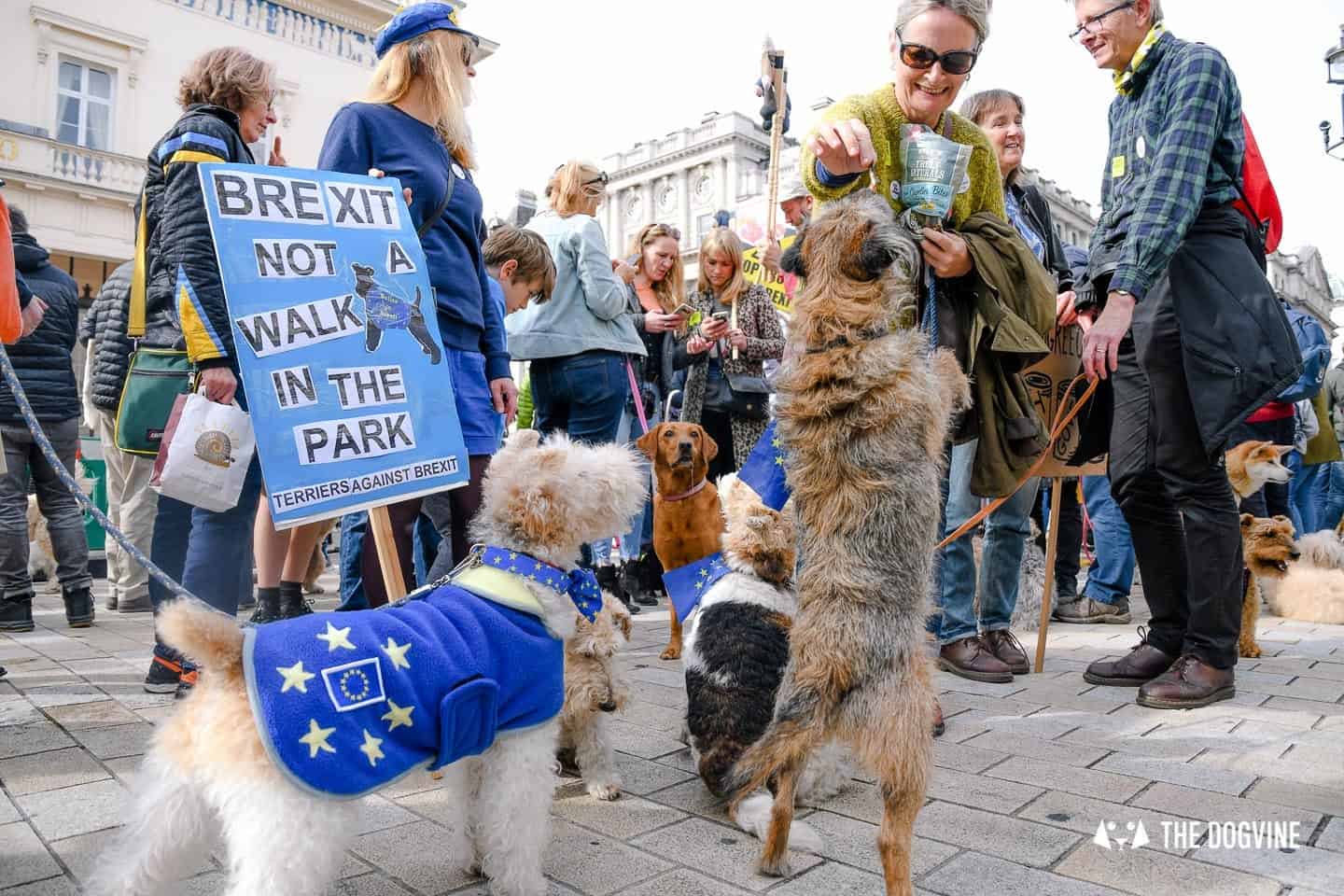 For humans (and especially the puparazzi press) it had to be the opportunity to catch dogs relieving themselves on the strategically placed ‘peeing stations’, each suitably adorned with faces of the nations politicians.

Whilst some dogs needed no bidding, others looked on bemusedly whilst owners encouraged them to do their business on the faces of Boris (a popular choice), Theresa May or Nigel Farage amongst others. 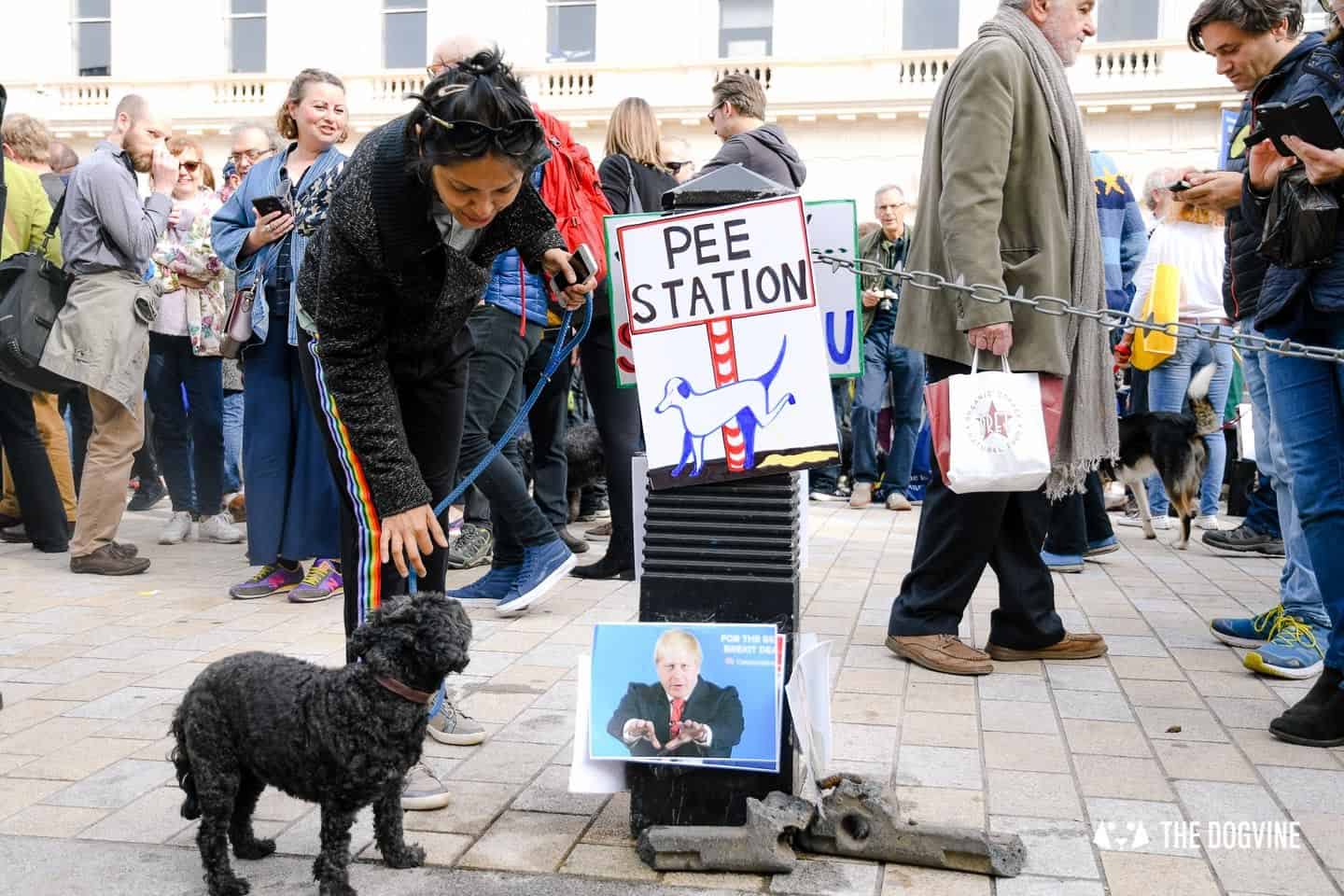 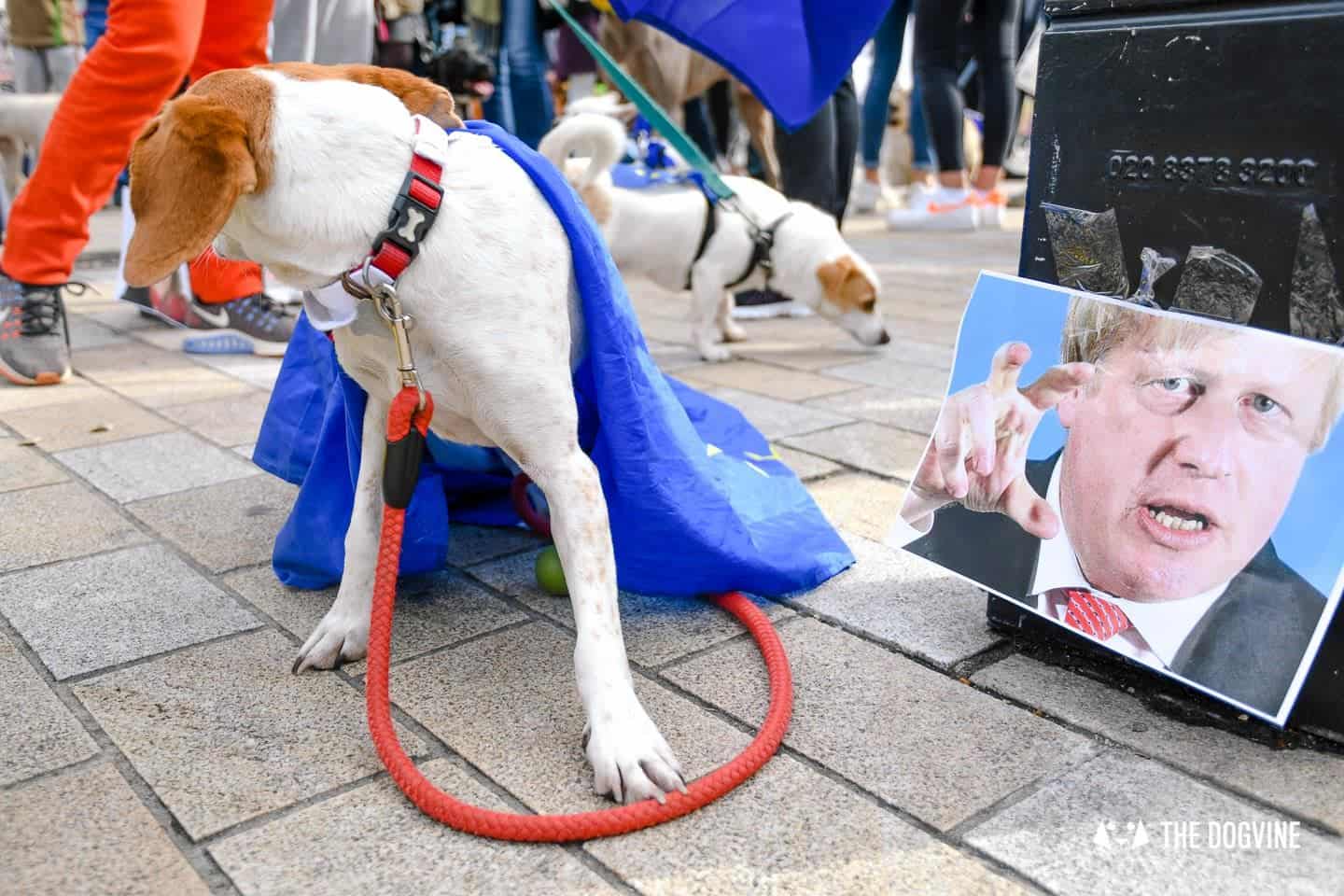 The Wooferendum March then made it’s way to Trafalgar Square, moving down Whitehall to finish in Parliament Square where dogs joined in the ‘pawlitical’ rally.  Speakers included Daniel Elkan, founder of the Wooferendum movement, former Labour spin doctor Alistair Campbell who had come along with his dog Skye, as well as leading animal campaigners Dominic Dyer and Peter Egan speaking on why Brexit could be bad for dogs. 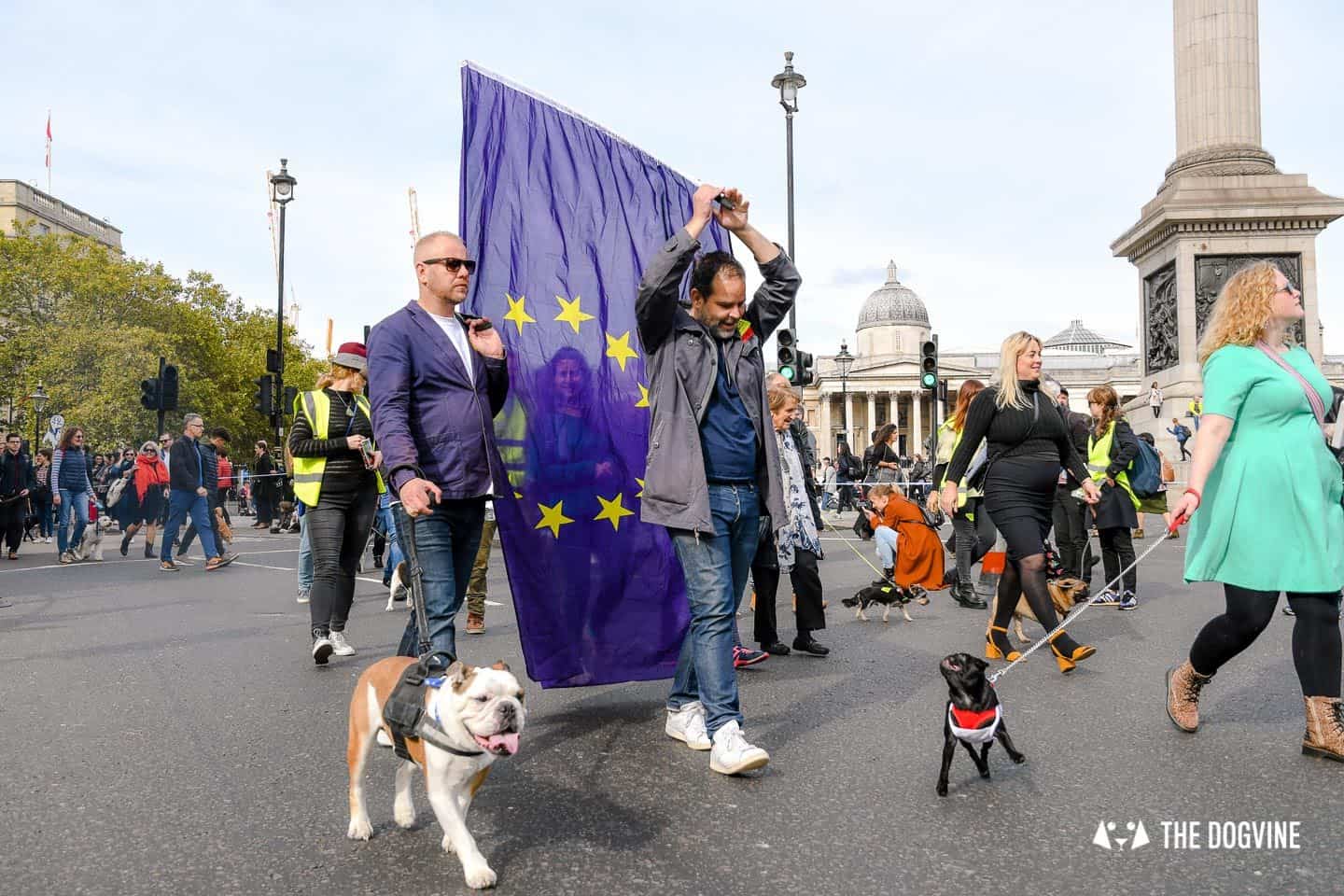 Will the Brexit Wooferendum March make a difference? Who knows, but whether it does or not, it was a barkingly British thing to be part of and showed that we, as a nation of dog lovers, will not roll over without a fight and neither will our dogs. 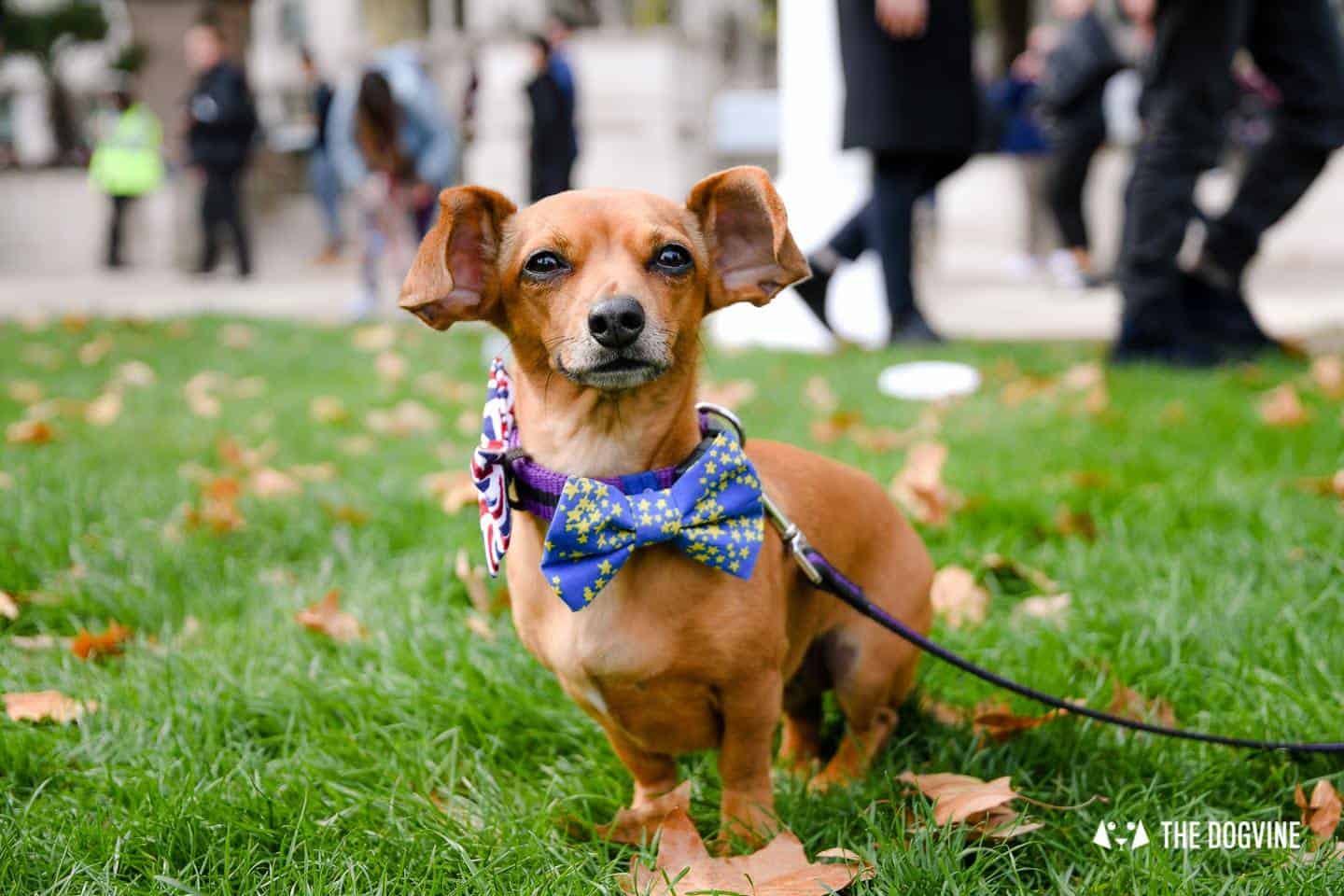 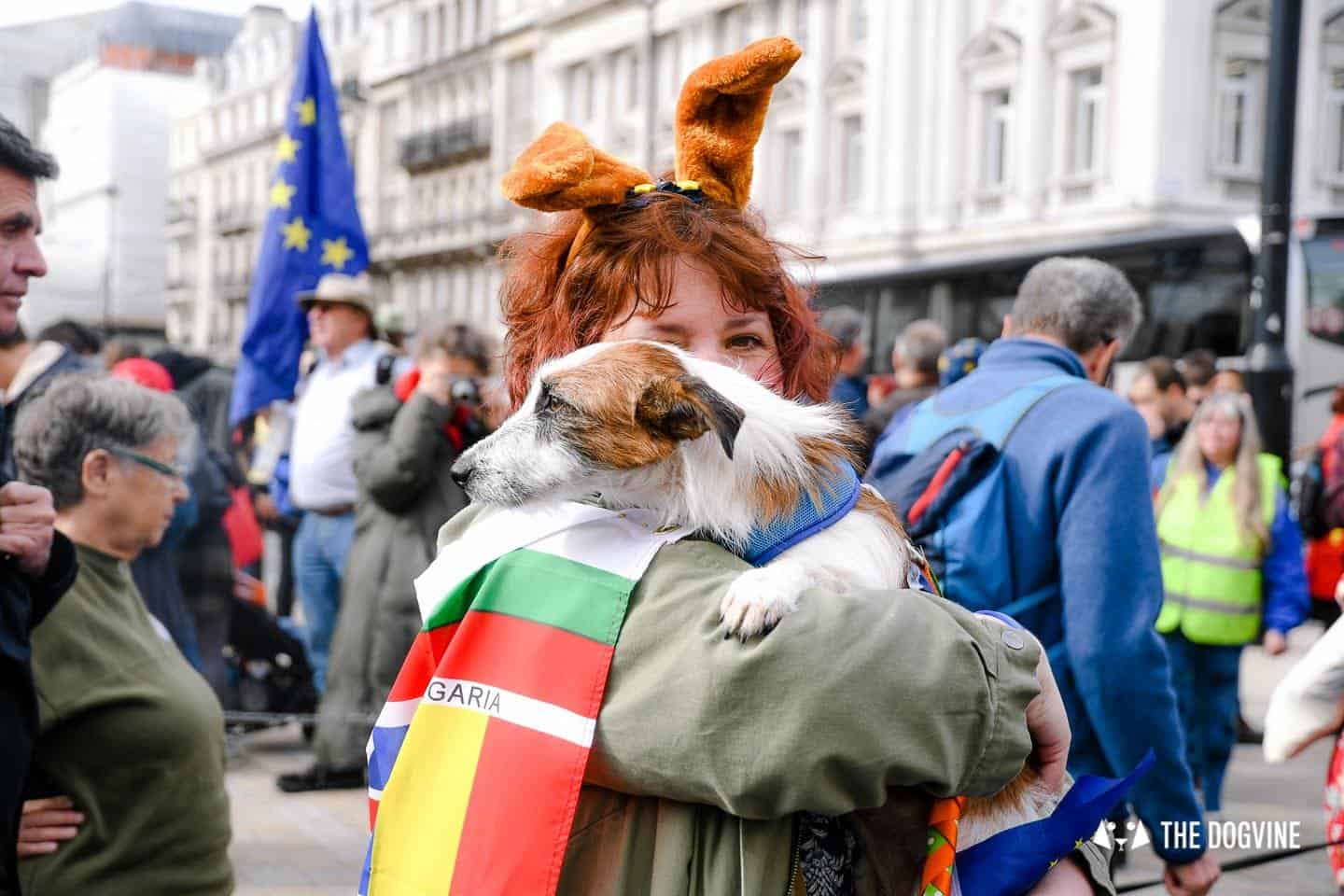 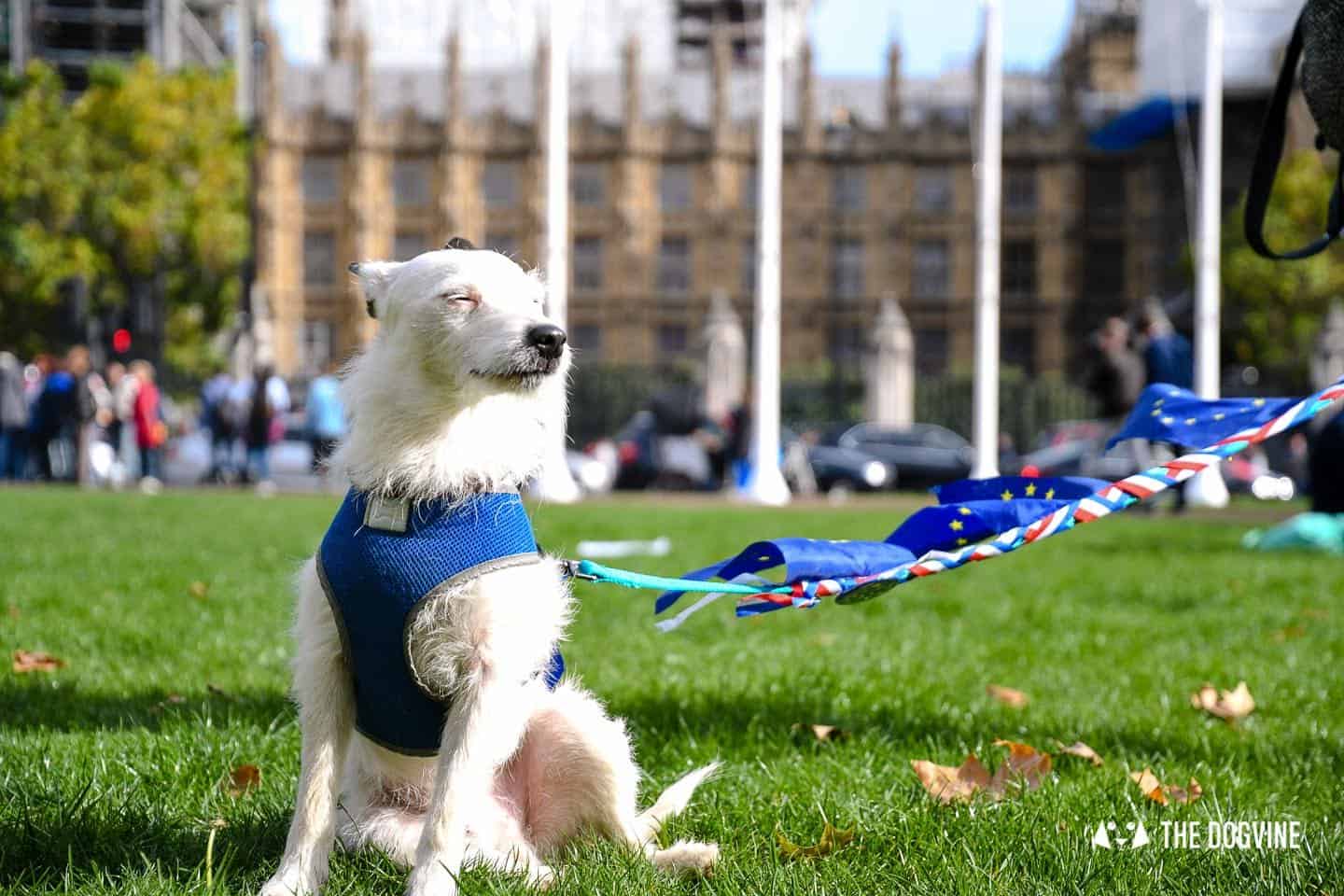 The Wooferendum March in pictures…

This post is intended to report on a London Dog Event and is not intended as an expression of political affiliation.