We’ve recently been spending time on one of London’s best kept public transport secrets, the Thames Clipper River Bus. So it’s not really a secret, but somehow an air of mystery surrounds the River Bus…where do you get it from, how do you get a ticket and most importantly….is the River Bus dog-friendly? So we decided it was time more London dogs were in the know and to create a guide on how to get around London with a dog on the River Bus. 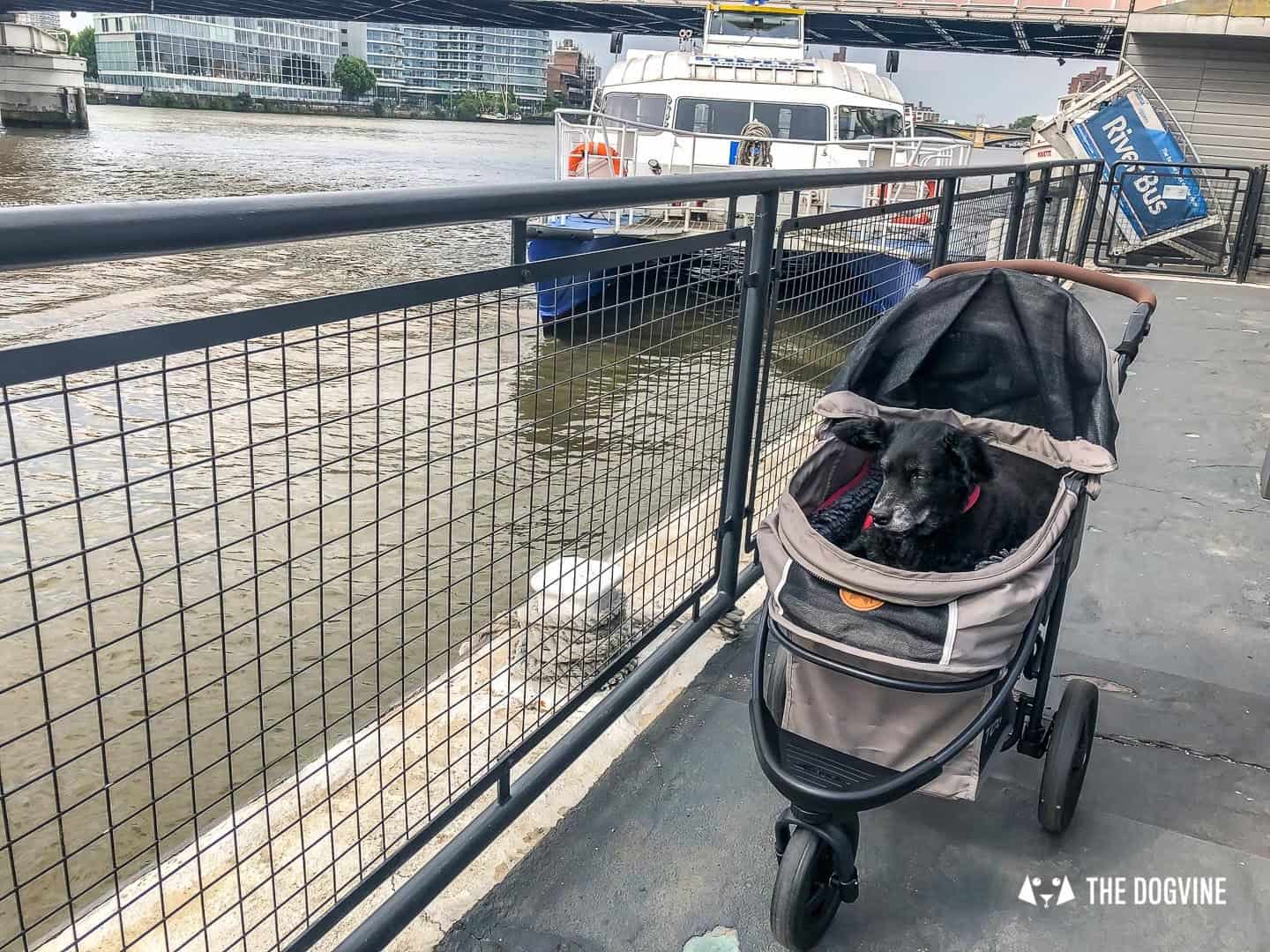 In this post we’ll share with you all you need to know about, what is in our opinion, the most underused and most comfortable form of public transport in London especially when traveling with a dog. We’ll also share with you a little story about what not to do when on board with a dog – one that I can now laugh about but at the time I was definitely not laughing. More on that in a moment.

The Thames Clipper River Bus network runs from between Putney in the West of London to Woolwich in the East with five river bus routes and 21 piers where the river buses stop along the way. This means you can literally get from one side of London to the other on the river! 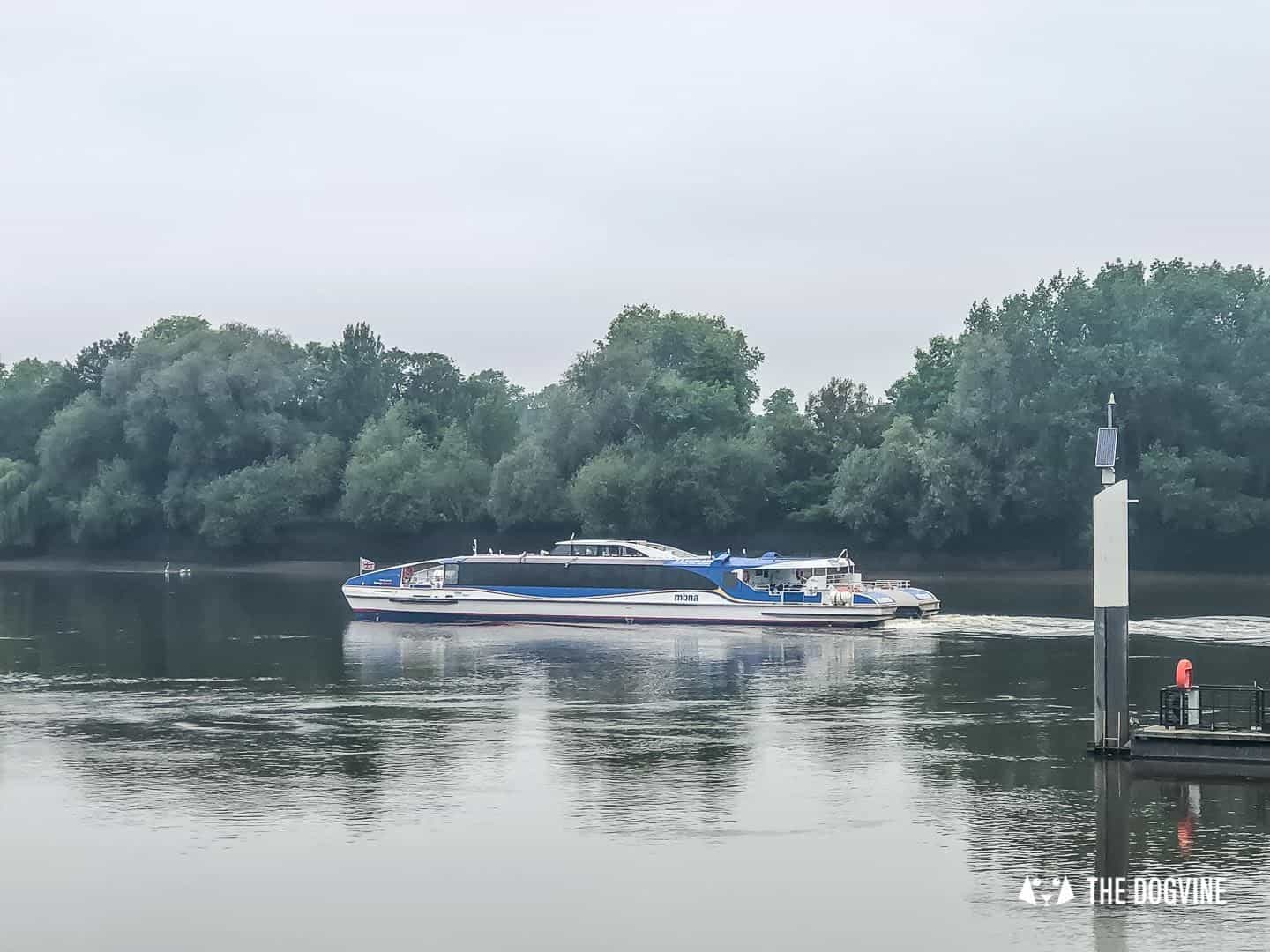 All the piers en route have step-free access except for Wandsworth Riverside Quarter Pier, Cadogan and London Bridge City Pier so this makes it a great travel option for people and dogs with mobility issues or if you have a heavy dog or multiple dogs.

We have used both Wandsworth Riverside Quarter Pier and London Bridge City Pier with a dog stroller. We didn’t have an issue but suspect the reason for not classifying these piers as step-free is the ramp down/up to the piers is long, steep and quite narrow (see Wandsworth Riverside Quarter Pier below). I can see how this would be an issue for a wheelchair but for dogs and even Belinha in a dog stroller,  it wasn’t a problem. 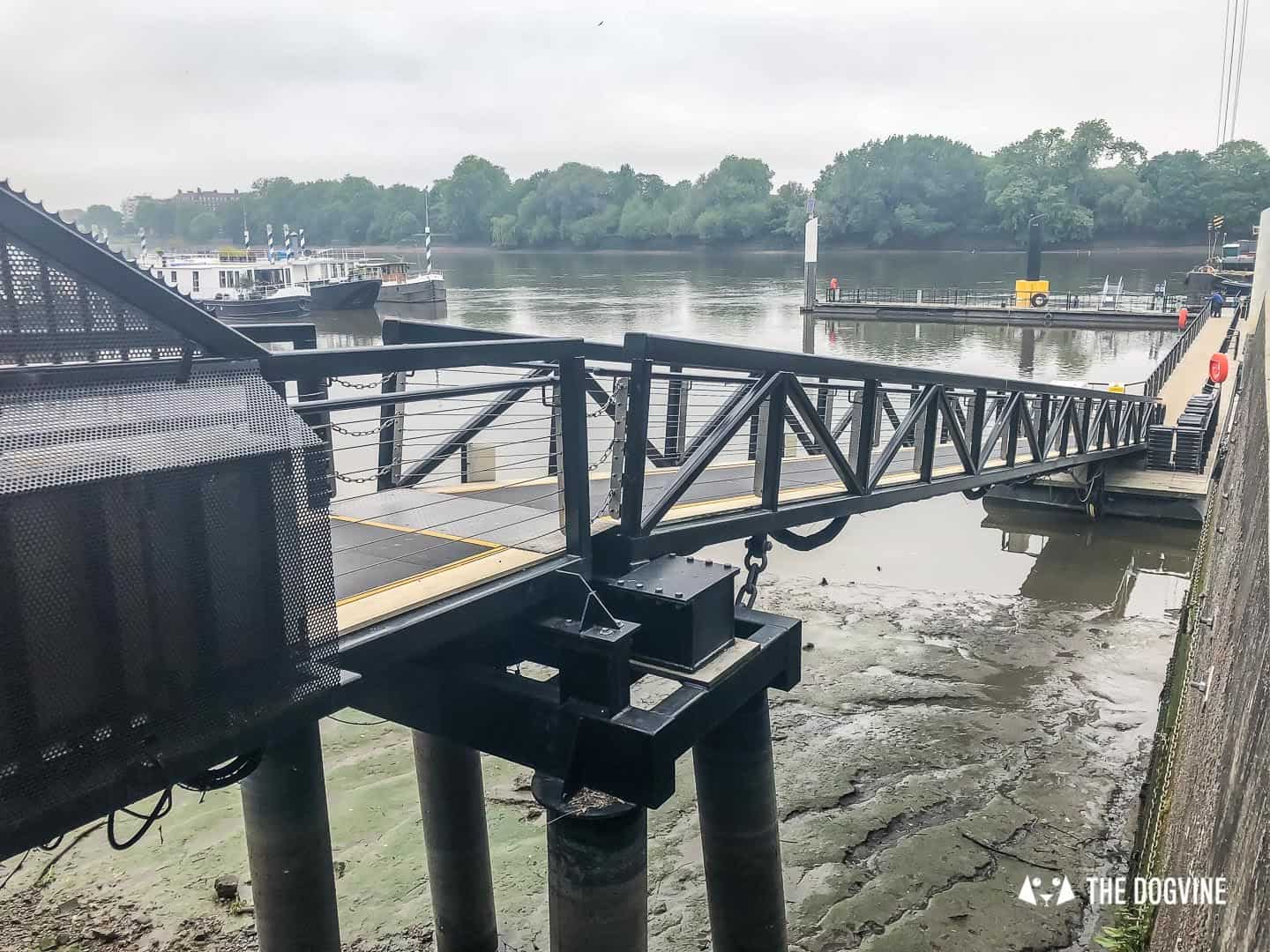 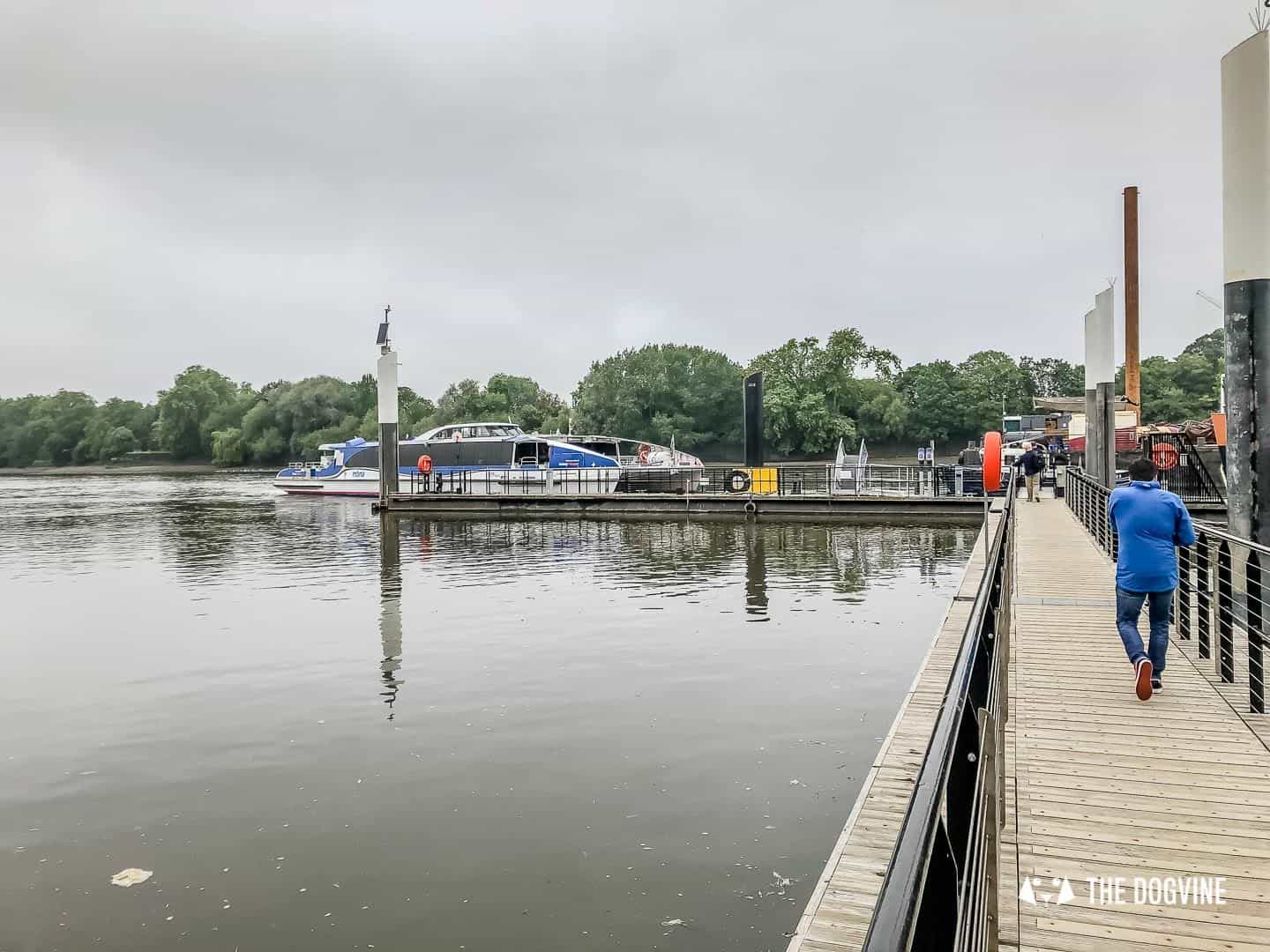 We’ve been on two types of River Bus, one small and one large. The larger ones have outdoor seating space as well as a licensed bar on board serving drinks and snacks which was a nice surprise. The interesting thing is that on both, you are guaranteed a seat which is not very in tune with London Public Transport these days at all! In fact on one particular busy boat when we approached the next pier the crew called out how many spaces there were and only that many people were allowed on. So for that alone, it possibly has to be the most relaxing way to get around london (with or without a dog).

Let’s deal with the important stuff first. We wouldn’t be doing a guide on how to get around London with a dog on the River Bus if the river buses weren’t dog-friendly. The rules are that dogs are allowed on board but must be kept on a lead for safety reasons (no dogs over board please).

Dogs are also understandably not allowed to sit on the seats. We saw a couple of dogs commuting with their humans who looked very happy to be on board. None were traveling in the same level of style that Belinha was in her new dog stroller though!

There will be a post coming soon about Belinha’s new wheels, but for those wondering why we’ve got a dog stroller, Belinha has recently been diagnosed with arthritis so walking long distances are now tough. This way Belinha can still get around town but let me do all the hard work! 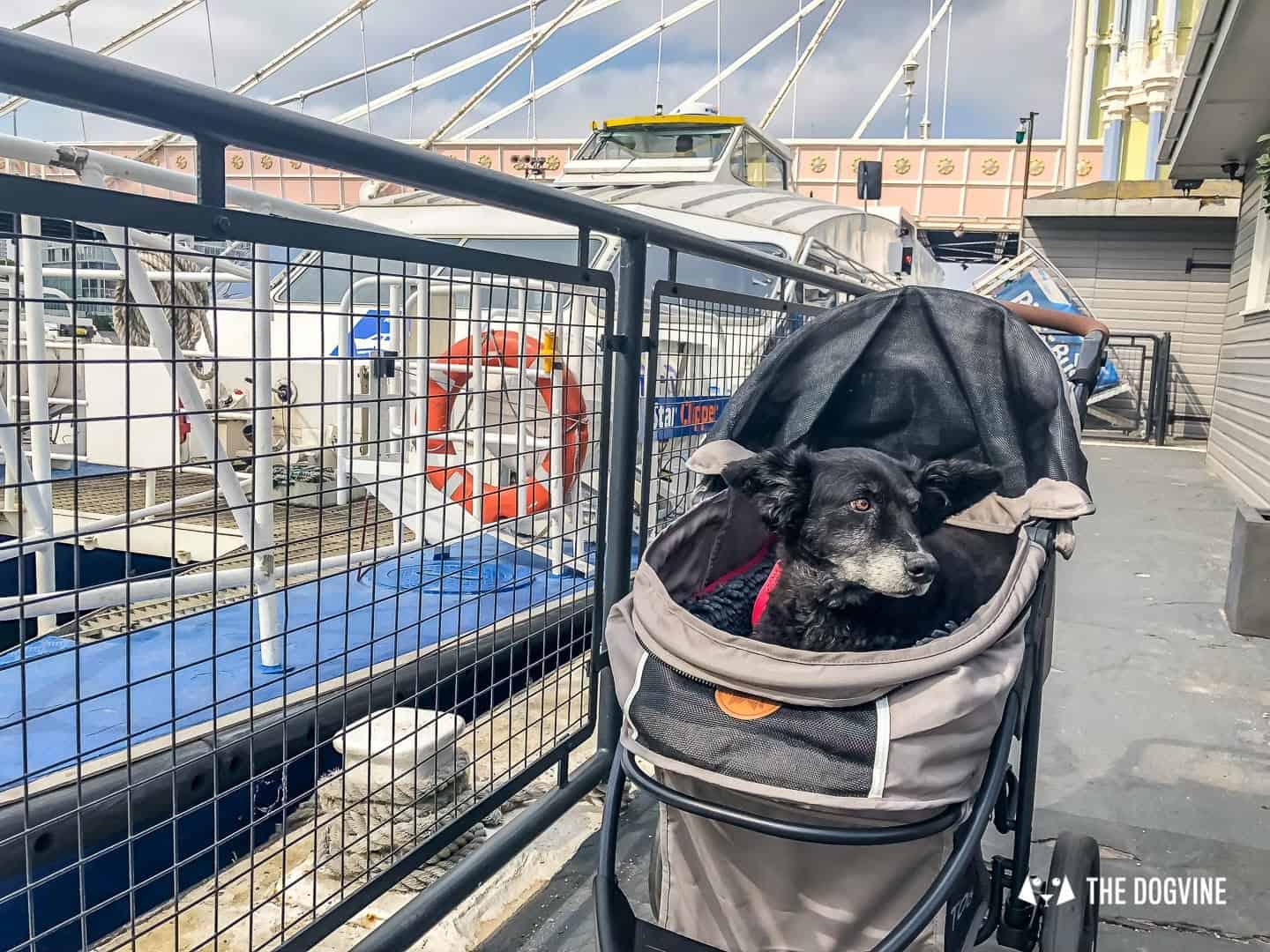 The river bus boats are operated by MBNA Thames Clippers who have a handy app with timetables and live departures so make sure to download that before you travel. Tickets for the River Bus can be purchased in advance or there are Oyster / Contactless stations as you board the boat.

Fares are calculated on a zonal basis for River Bus services, so the fare you pay depends upon the zones you travel through: east, central or west zones. A full fares table and the River Bus route map can be found on the MBNA Thames Clippers website but as a guide, the adult single oyster fare ranges from £4.10 to £7.50 depending on which zones you travel through. As with other forms of London public transport, dogs go free. There is also a Daily River Roamer ticket (hop-on/hop-off) which is £19 per day if you fancy making a day of it. 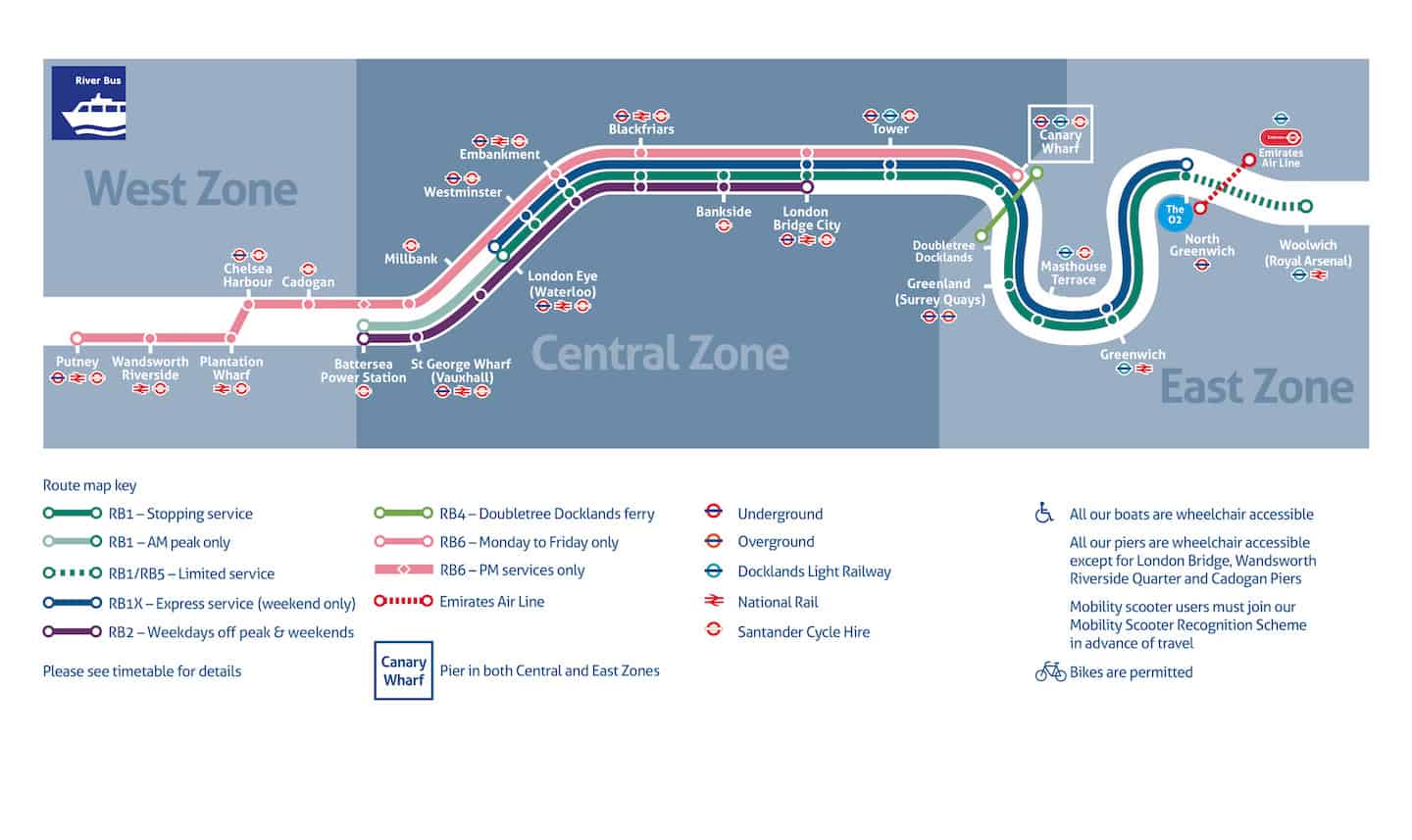 The timetable for the River Bus services takes a little getting used to, especially if you’re at either far end of the Thames Clipper River Bus line as those piers only operate at peak times. Boats go every 20 minutes or so from the major London piers but are less frequent from the outlying piers and some piers don’t have a service on the weekend as shown in the map above. 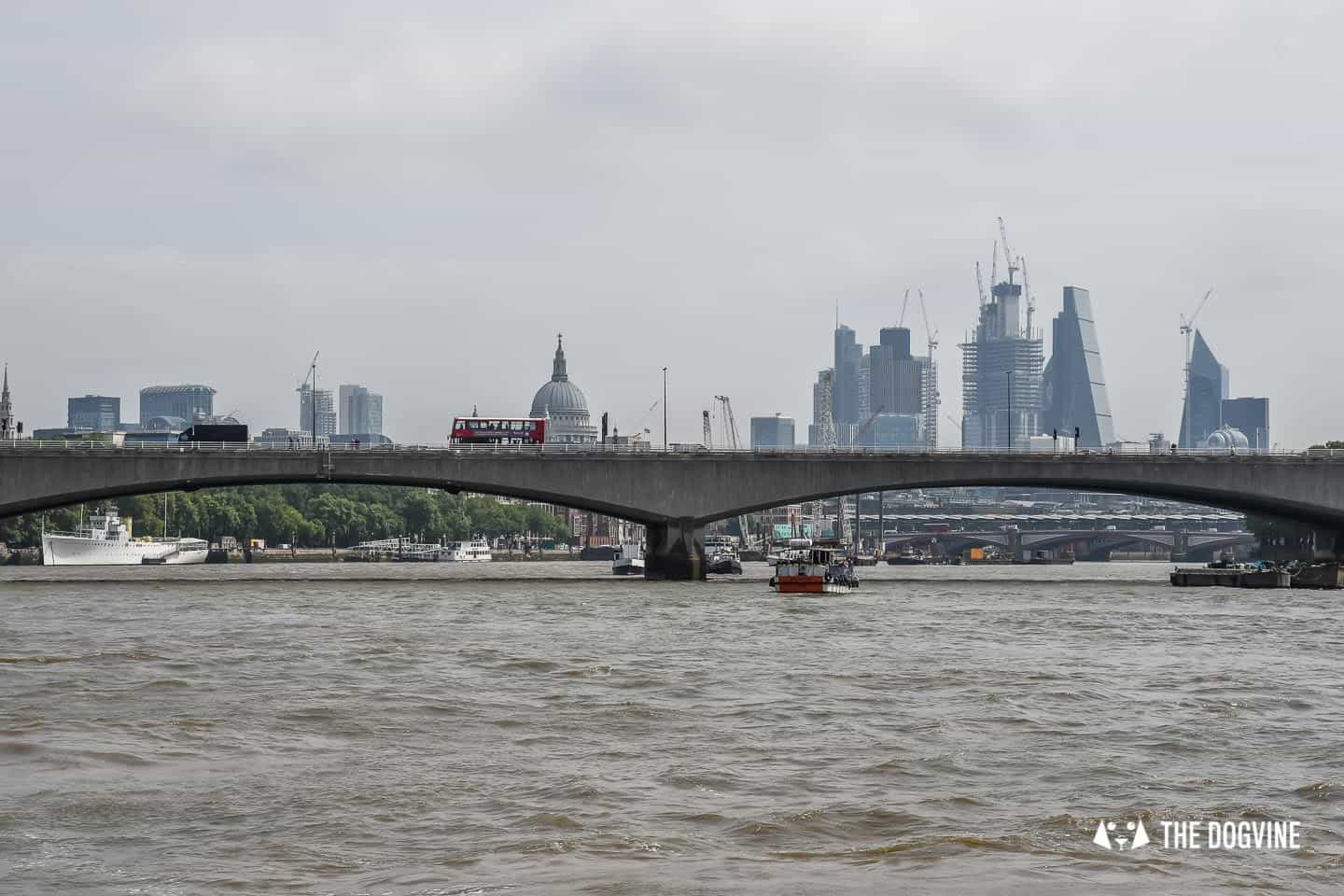 So, here’s how NOT to get around London on the dog-friendly River Bus! On our very first River Bus trip we were headed to Chelsea in Bloom (read our post on that here) and got off at Cadogan Pier which is one of the smaller piers so not manned by River Bus staff.

I was so preoccupied with getting myself, Belinha and the dog stroller off the boat that it wasn’t until I was standing on the pier taking a few pictures for this post on my phone and went to reach for my proper camera that a sinking feeling came over me as I realised that my rucksack with a lot of expensive camera gear, not to mention all my personal stuff was sailing down The Thames still on board! All I had was my phone, a contactless card and the dog stroller with Belinha in it, the sinking feeling soon turned to full on panic!

I decided the best thing to do would be to wait until the next boat came by and speak to the crew but this was going to be a very nerve-wracking wait. I had visions of my solo bag being destroyed as a security risk or simply disappearing. Then I spotted a police boat and as I was pretty upset by now, I flagged them down and they came straight over. 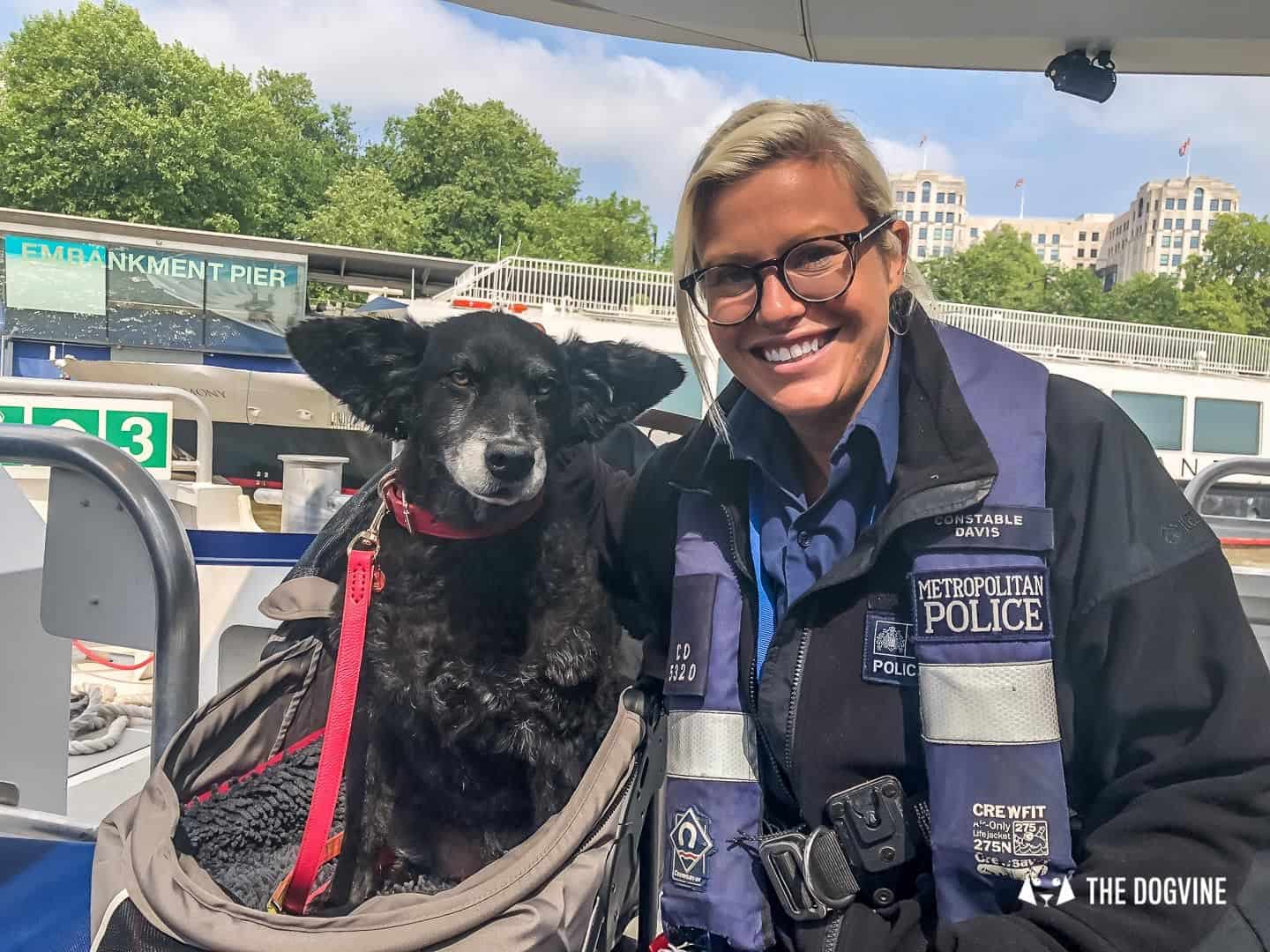 One of the officers, Constable Davis came off the police boat to wait for the next boat with me whilst the police boat went back down the river to (hopefully) catch up with my bag. To cut a long story short, the Metropolitan Marine Police were amazing and really saved the day as by the time we got the next boat down to Blackfriars, the police boat had successfully retrieved my bag with everything luckily still in it.

To say this was a huge relief would be an understatement. Constable Davis and her colleagues were all big dog-lovers and Belinha made sure to quickly win them over and say thank you for helping us. 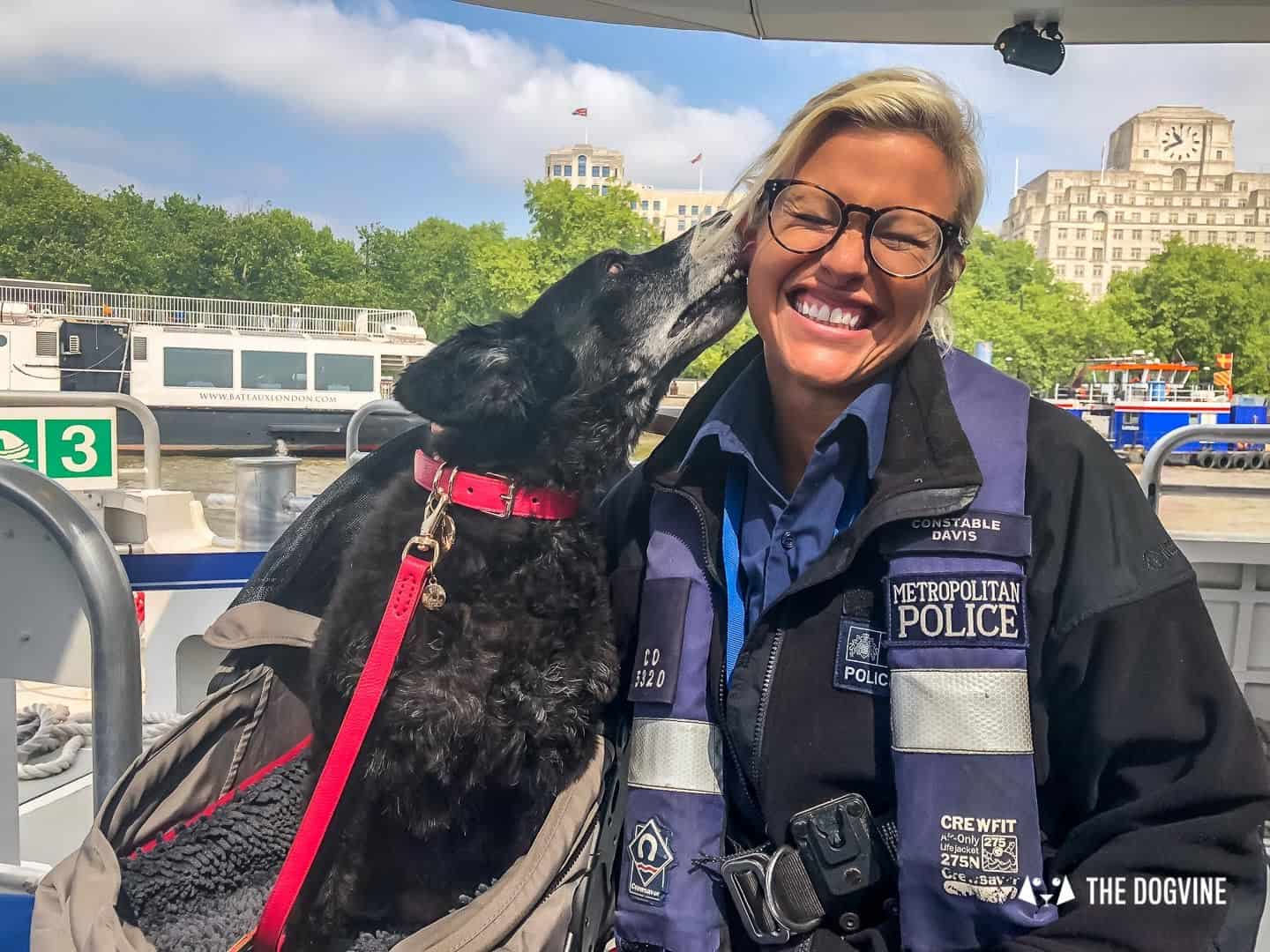 So our how to get around London with a dog on the River Bus guide would not be complete without a HUGE shout out to the Met Marine Police, if you ever find yourself in trouble on (or beside) The Thames, you’d better hope these guys aren’t too far away! 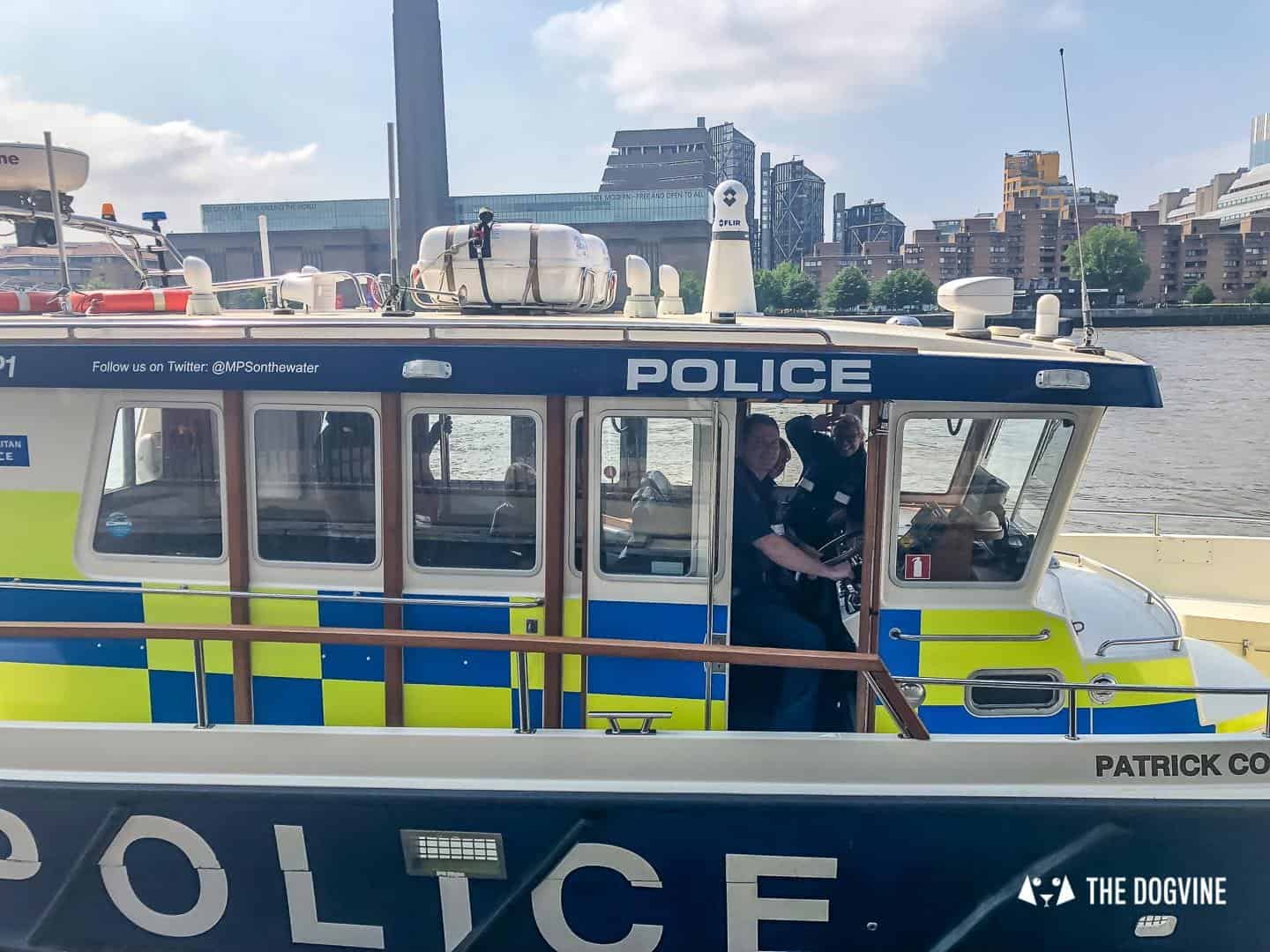 Aside from the lost bag incident, traveling around London on the dog-friendly River Bus has to be the most relaxing form of Public Transport we’ve experienced to date. We can’t quite believe we haven’t been using the river buses more often! 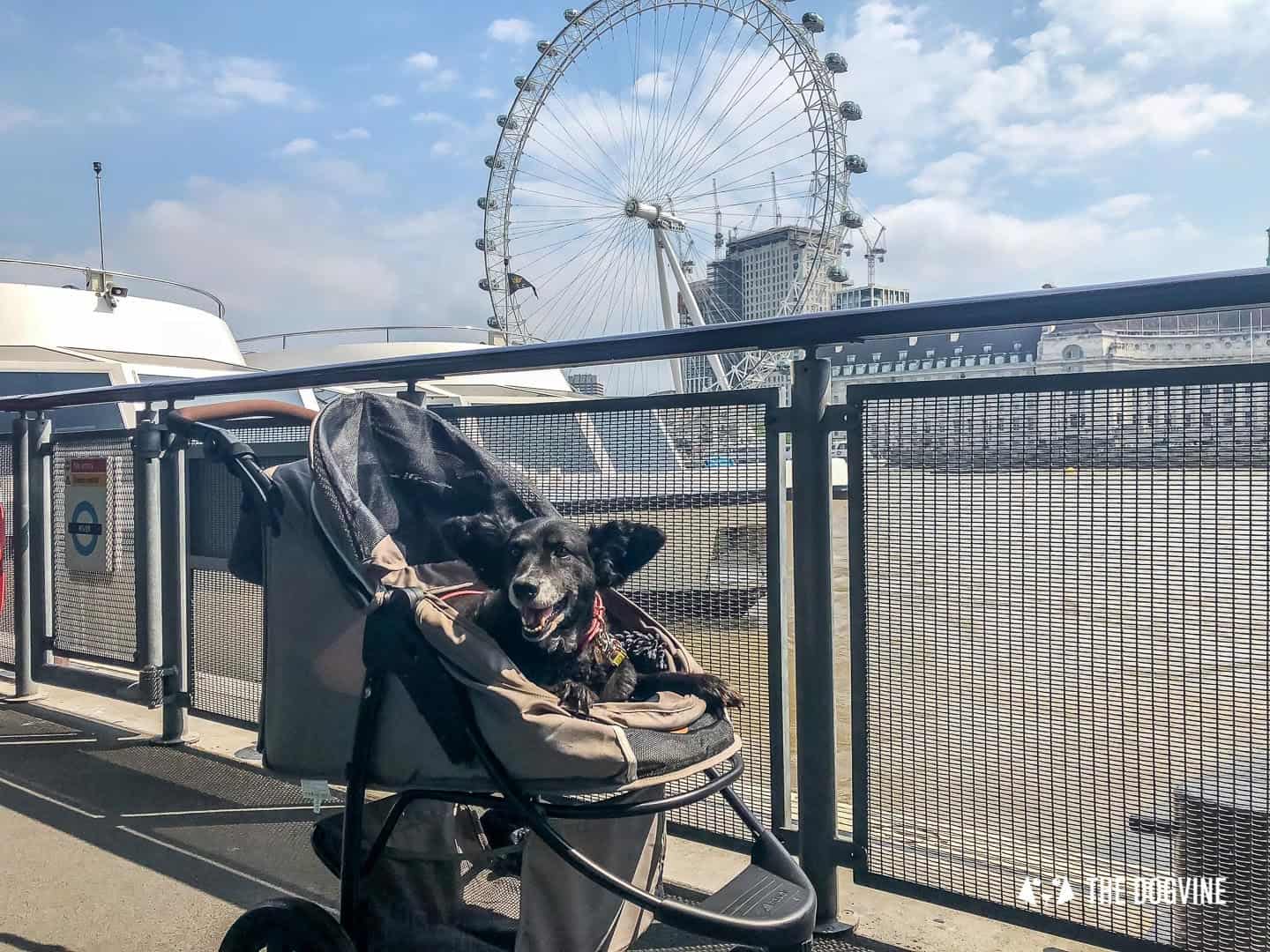 It’s definitely a far less stressful and crowded way to travel for dogs than going on a busy tube, train or bus so makes for a much more pleasant experience for four-legged commuters. If you want a mode of public transport that is dog-friendly (especially for large dogs or dogs with mobility problems), escalator free and quite simply a breeze, this is it. 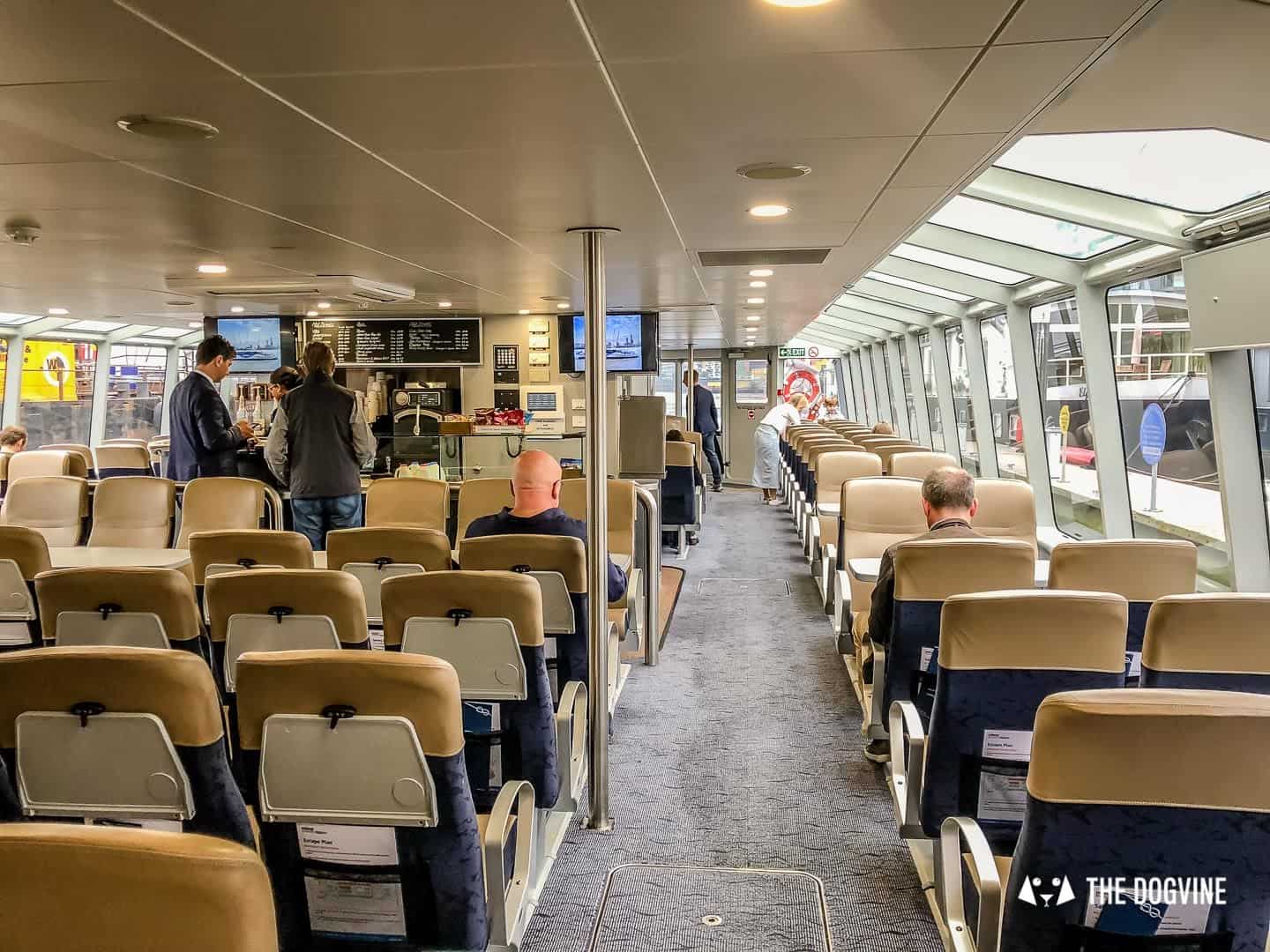 Then there are the views! Being on the river you get an amazing view of some of London’s landmarks, we literally sailed right under the London Eye. It really reminded me to appreciate being a Londoner and having this as a public transport option seemed for a moment, pretty surreal. 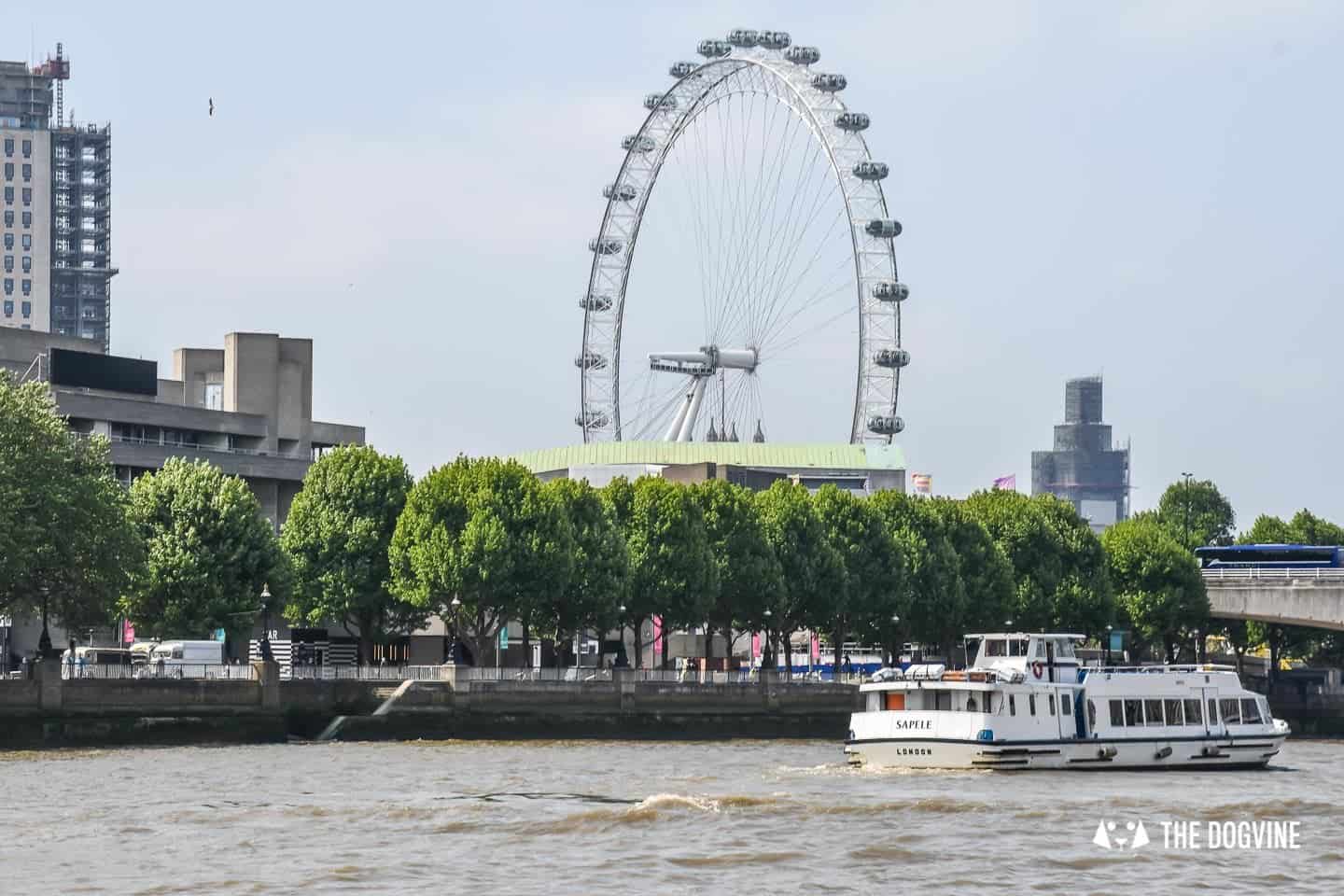 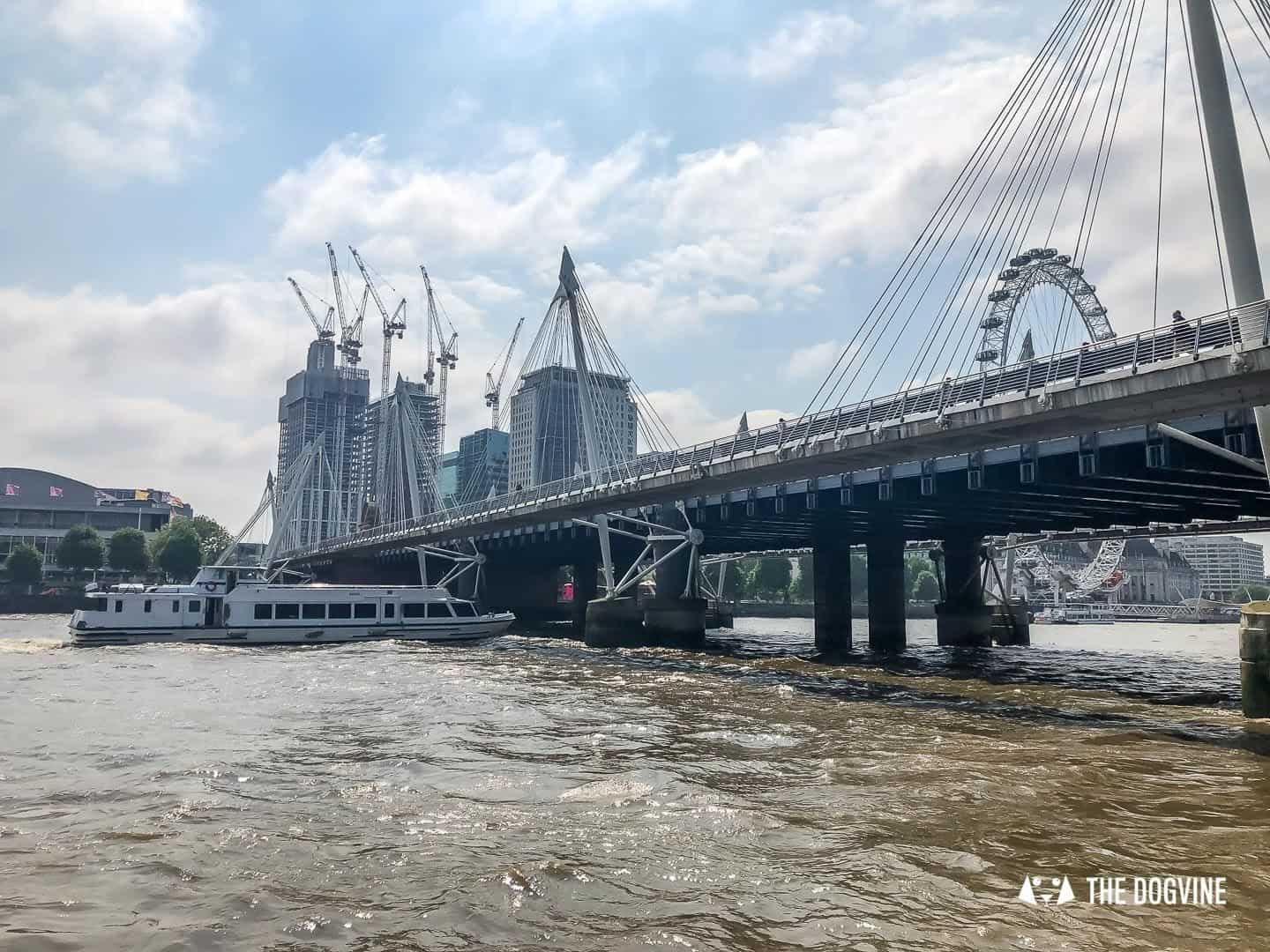 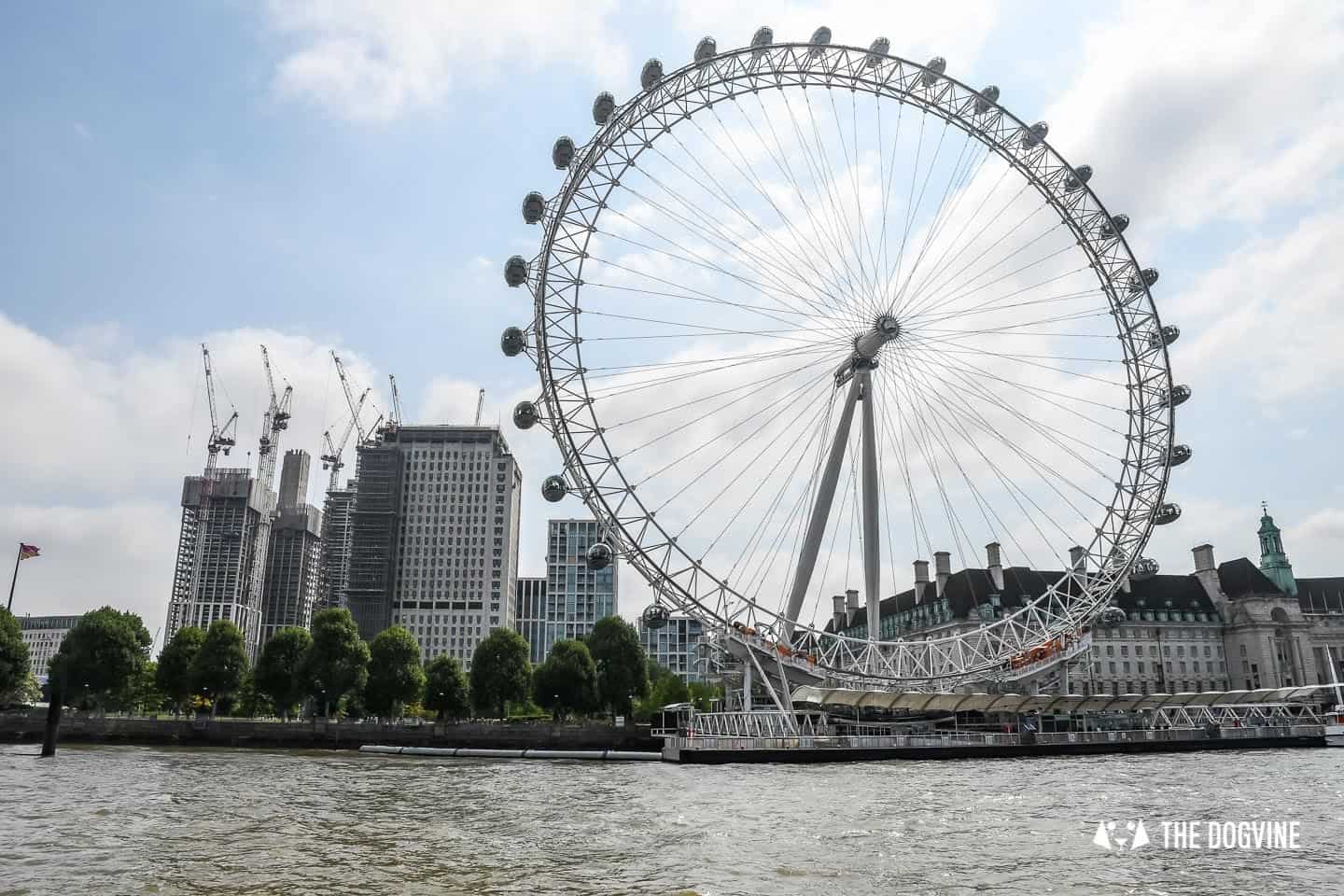 Even if you need to go to more towards Central London, you should be able to find a pier that brings you closer to your destination. The only downsides of traveling on the river bus would be that depending on where you are and when you travel, the timetable may be a bit limited. It is more expensive than taking the tube but the comfort factor for you and your pup makes this well worth it in my opinion. In future the dog-friendly river bus will be our first choice for London travel whenever possible! 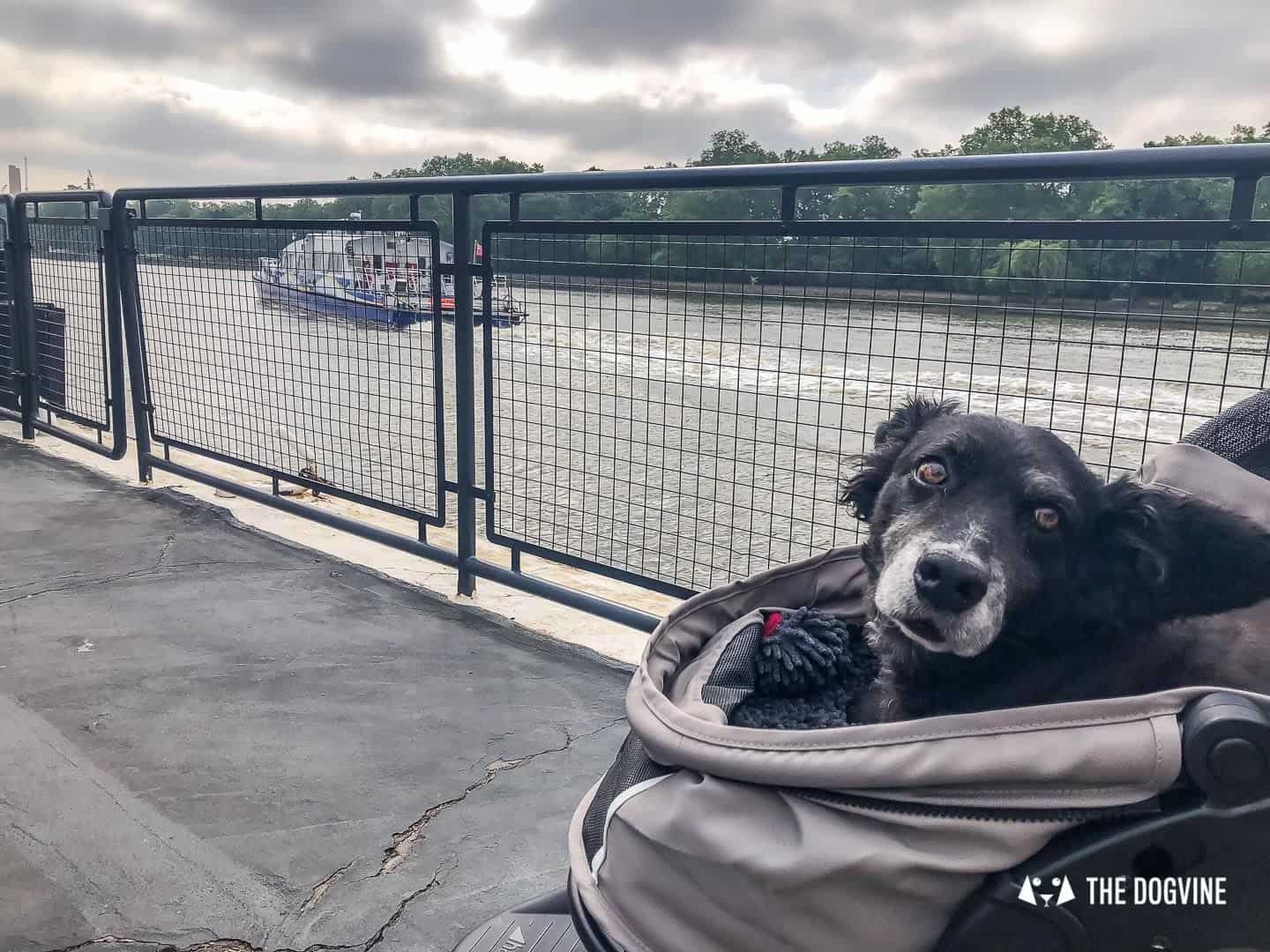 We hope you enjoyed our guide on how to get around London with a dog on the River Bus.

If you take your pup on the Thames Clipper River Bus we’d love to see your pics so please tag us in any photos (Insta / Facebook / Twitter ~ @thedogvine). 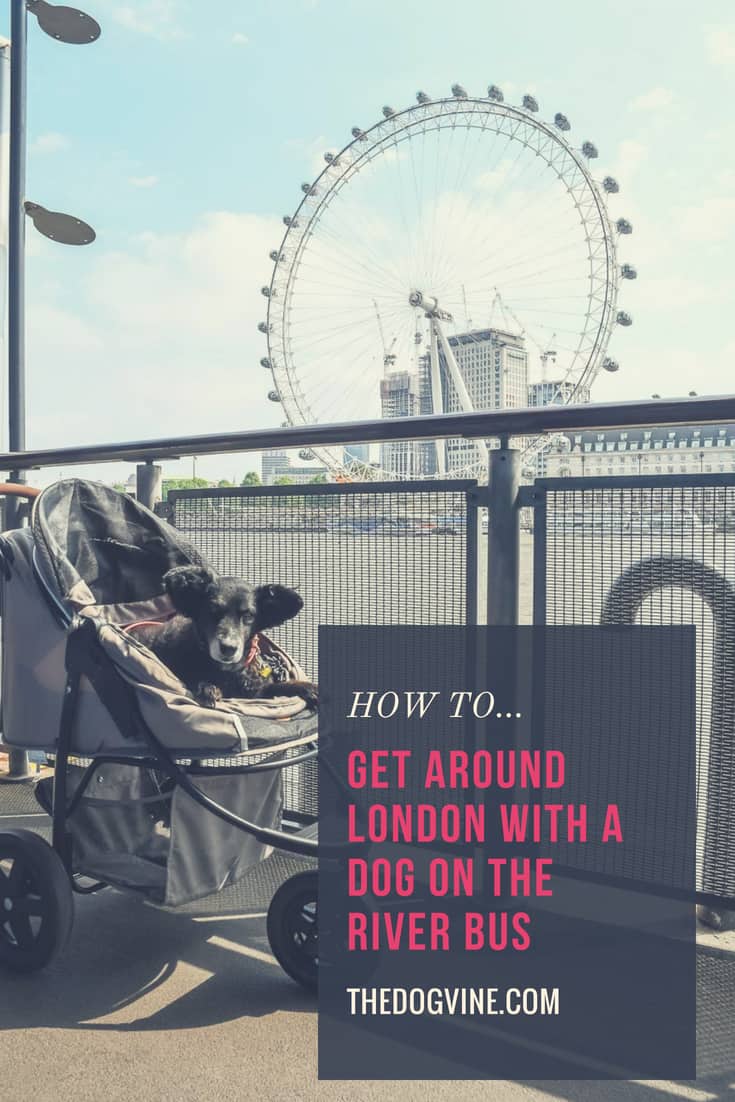 Don’t forget to check out our other useful Guides for London Dogs about town.