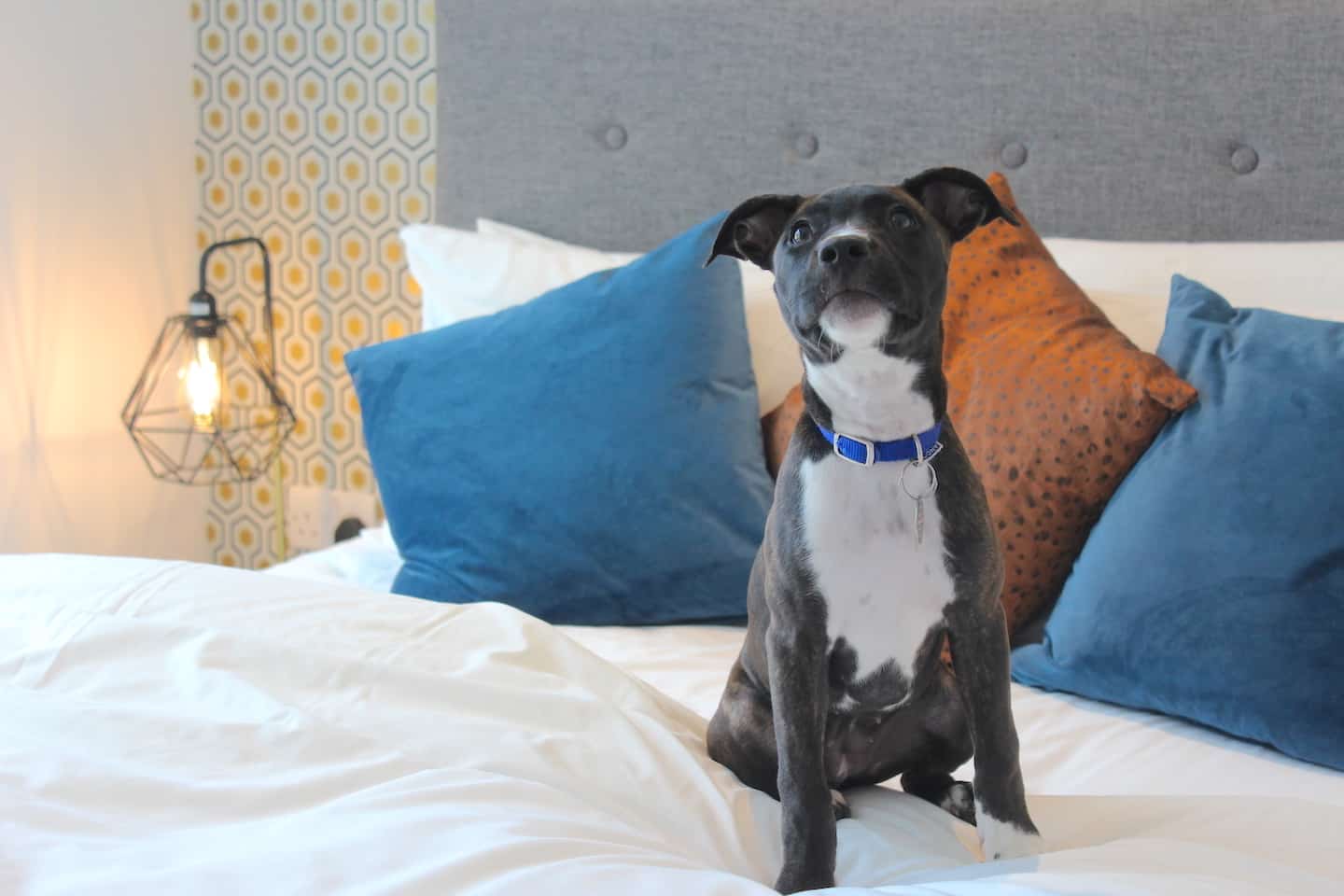 ‘How Renting a Flat with a dog in London is easy’ are not words you would usually expect to see in the same sentence. However, thanks to pet friendly professional landlord Fizzy Living, those words are definitely a reality and for some, can even make dreams come true.

We caught up with some of Fizzy Living’s human and hound residents to find out how their renting experience has been, and how Fizzy Living is living up to their motto of ‘Reinventing Renting’, especially when it comes to renting with pets. But before we do, let’s take a look at how things normally are for people renting a flat with a dog in London.

Renting a Flat With a Dog in London | The Reality

According to research by Dogs Trust, 78% of pet owning tenants have trouble finding a flat or property to rent that will accept pets. Not only is this extremely stressful but it can lead to people having to surrender their beloved pets to rehoming charities when faced with no other option. In fact in the same research Dogs Trust found that sadly, 8% of the people surveyed had to do just that.

We are a nation of dog lovers with 24% of Brits now owning a dog according to the latest ‘PAW Report’ from leading vet charity PDSA. However these days, more and more people are finding themselves part of ‘Generation Rent’, so it’s no surprise that finding a flat to rent that will accept a pet is increasingly important but often hard to find.

In fact, we did a poll on our Insta stories to see if people found renting a flat in London with a dog was easy and the answer was a resounding no… 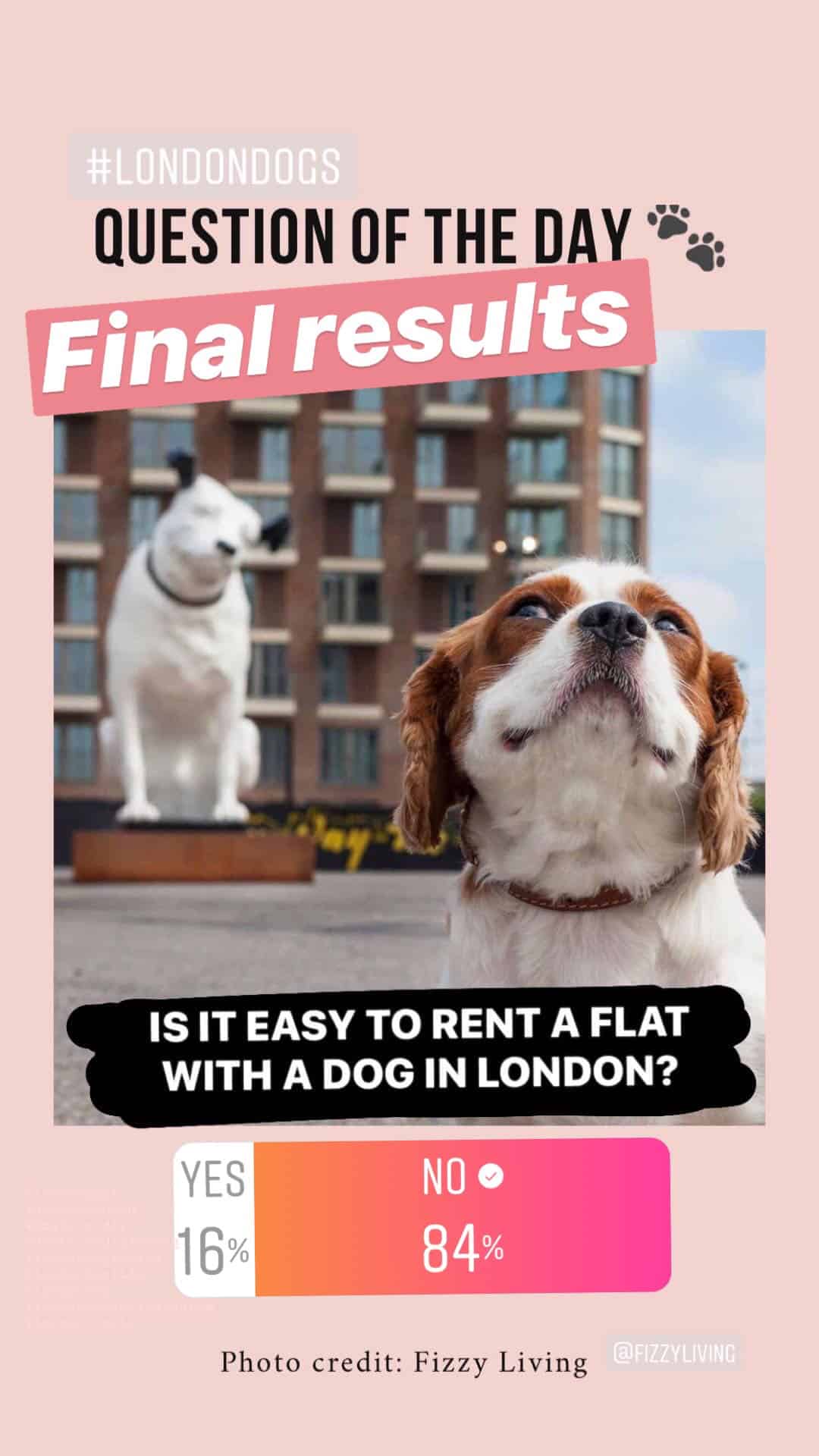 Dogs Trust decided to tackle the problem head on by setting up the advisory website Lets with Pets, which advises both tenants and landlords on the best ways to go about renting with a dog or other pet.

Even though several letting agent chains have signed up to support Lets with Pets (including Fizzy Living), the reality is that renting a flat with a dog in London can still be a struggle and finding properties that will not only accept dogs but go out of their way to welcome them often feels impossible.

Renting a Flat With a Dog in London | Reinventing the Reality

That was until we came across Fizzy Living. We’re not in the rental market but if we were, we’d be headed straight to the Fizzy Living website to see what was available. Not only are the properties simply stunning but pets are accepted at Fizzy Living, in fact pets are virtually put on a pedestal.

All seven of the Fizzy Living developments (Hayes, Lewisham, Walthamstow, Stepney Green, Canning Town, Poplar and Epsom) welcome dogs and even have a host of initiatives to make sure Fizzy’s four-legged residents are given the same level of service as it’s two-legged ones. A staggering 40% of Fizzy residents are pet owners with Fizzy Lewisham being the most popular building for pets so far with 30 dog and 33 cat residents!

Employees embrace the dog-friendly ethos too. Sophie Newman Lau, Head of Sales & Marketing often brings her 3-year-old Blenheim Cavalier King Charles Spaniel Milo with her to work and it’s no surprise that Milo’s favourite job is testing the new toys and treats at the popular pet stations.

By now we’re thinking that Fizzy sounds like the ideal place to rent an apartment in London. And it seems we aren’t the only ones…we caught up with three Fizzy Living residents about their experiences and what life is like at Fizzy for dogs.

Renting a Flat With a Dog in London at Fizzy Living | Layla, Faye and Matthew

Faye and Matthew who both work in the West End, have been living at Fizzy Hayes for five months now. One of the reasons they decided to move to Fizzy Hayes was that they could realise their dream of having a dog. 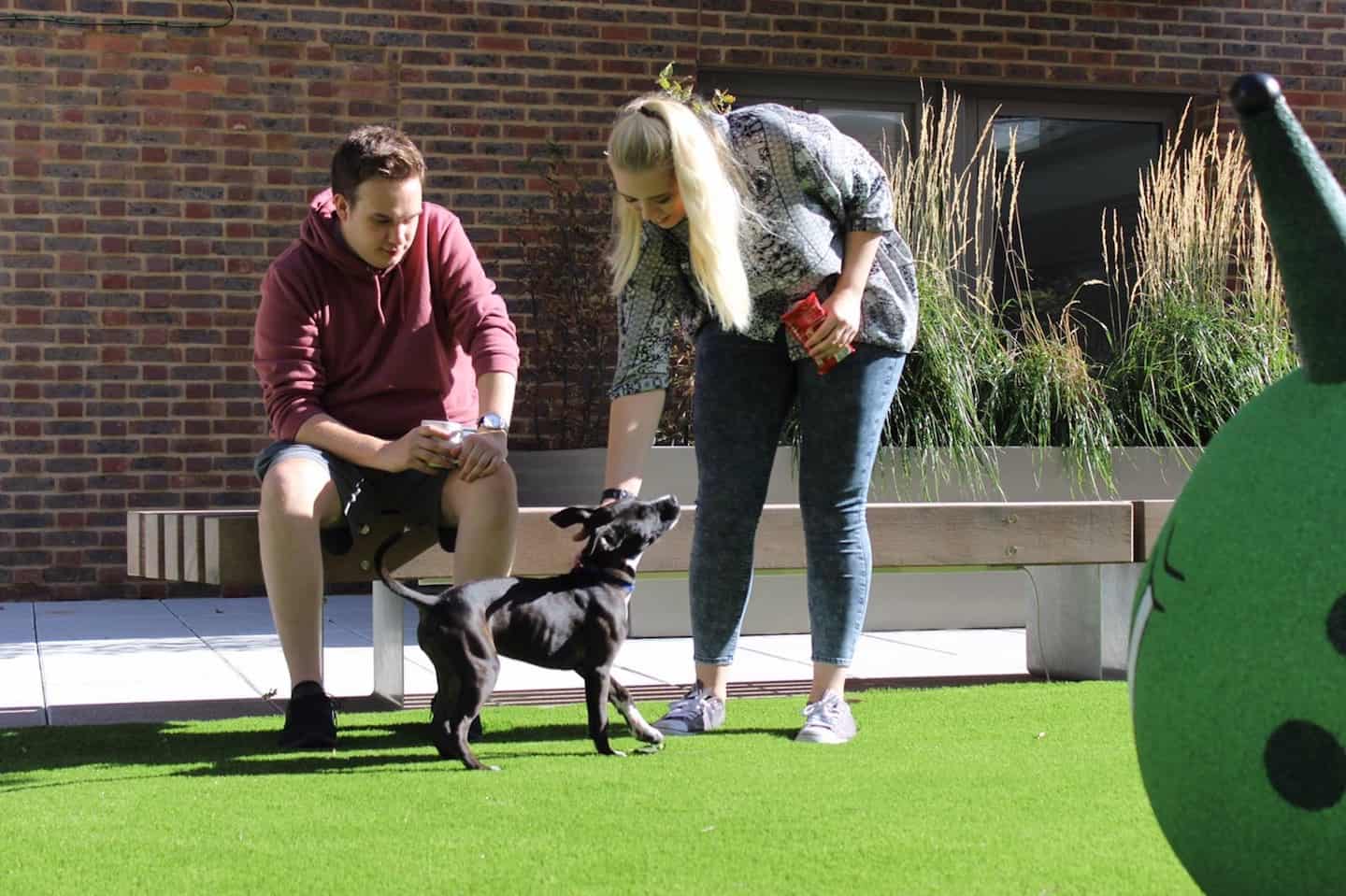 That lucky dog is our cover star Layla the Staffordshire Bull Terrier Cross who Faye and Matthew adopted from Battersea. Faye told us…

“Matthew and I have always wanted a dog so that was one of the reasons we moved to Fizzy Hayes. We got Layla from Battersea, she’d been given to her previous owners by a homeless man but sadly they were allergic to dogs. We went to go and see her on a Monday and took her home the very next day!

Layla loves to chase her tail and play fetch, she also loves going for walks down by the canal and running about in the communal garden.“

We can see she does… 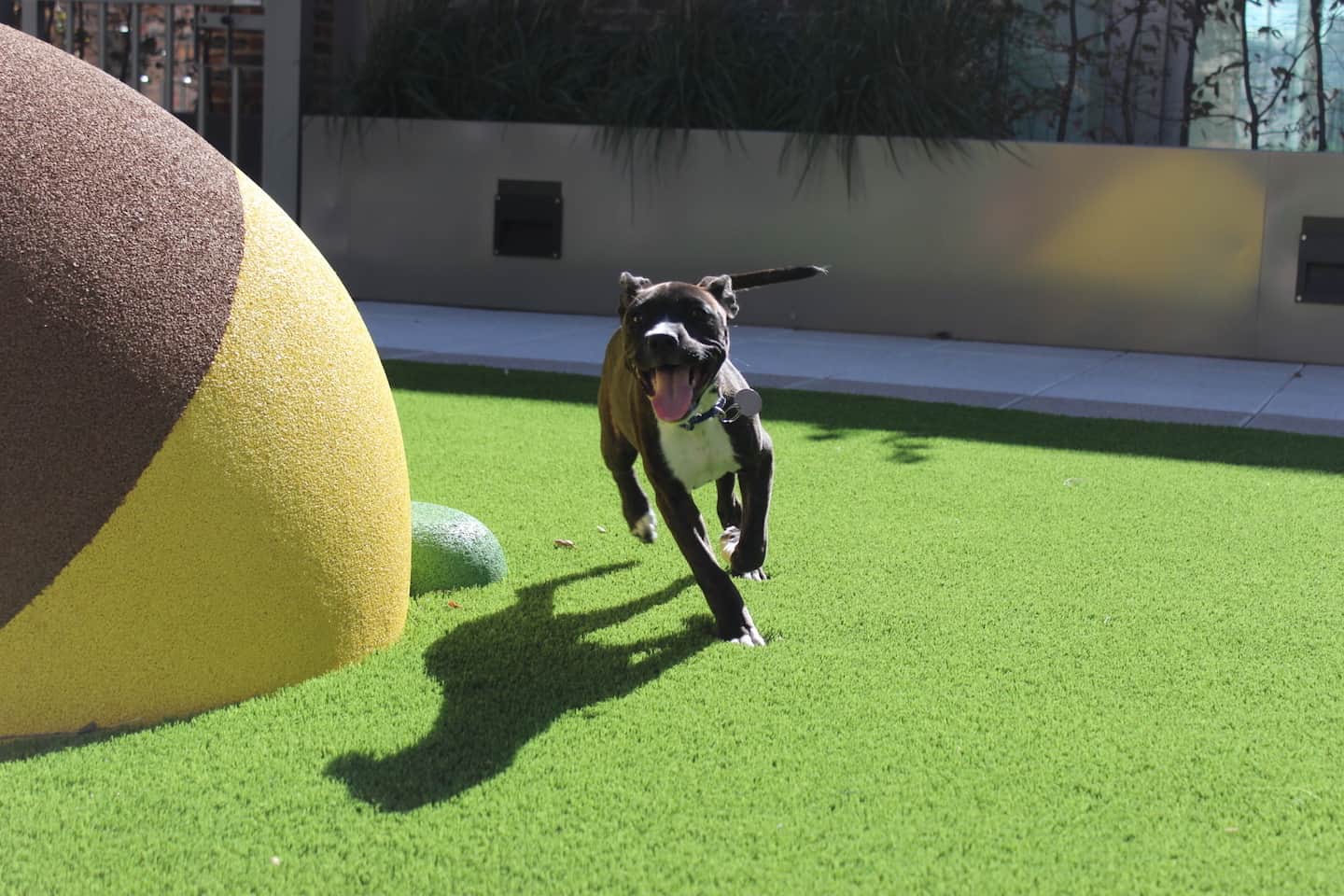 Lalya also loves: Poking her head out of the balcony to see what’s going on and to watch the trains go by.

Also residents of Fizzy Hayes are Juliana and 11-year-old Shih Tzu Belinha, who moved to the UK from Brazil four months ago (not to be confused with The Dogvine’s own Belinha who moved here from Brazil six years ago).

Juliana and her husband had researched finding a place to live with Belinha before making the move and realised just how difficult it was. They were overjoyed to find that Fizzy Living welcomed pets and that they could arrange everything before moving to the UK. 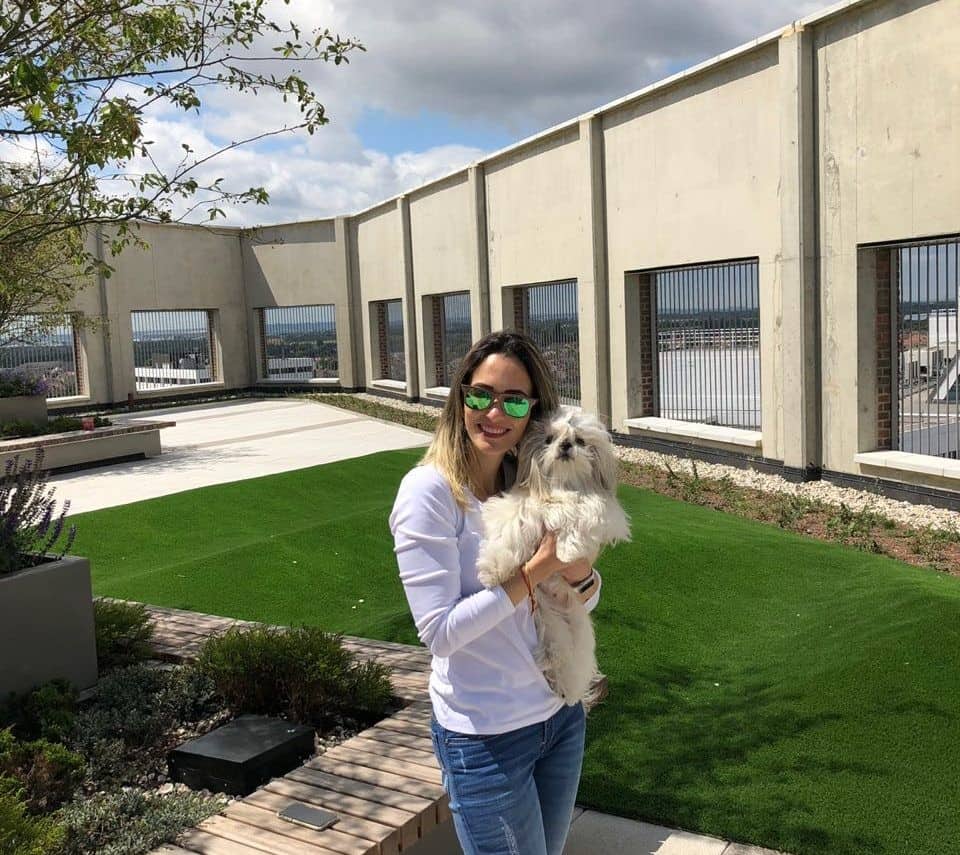 Despite her age, Belinha is an active girl and has made lots of two-legged and four-legged new friends since moving in. 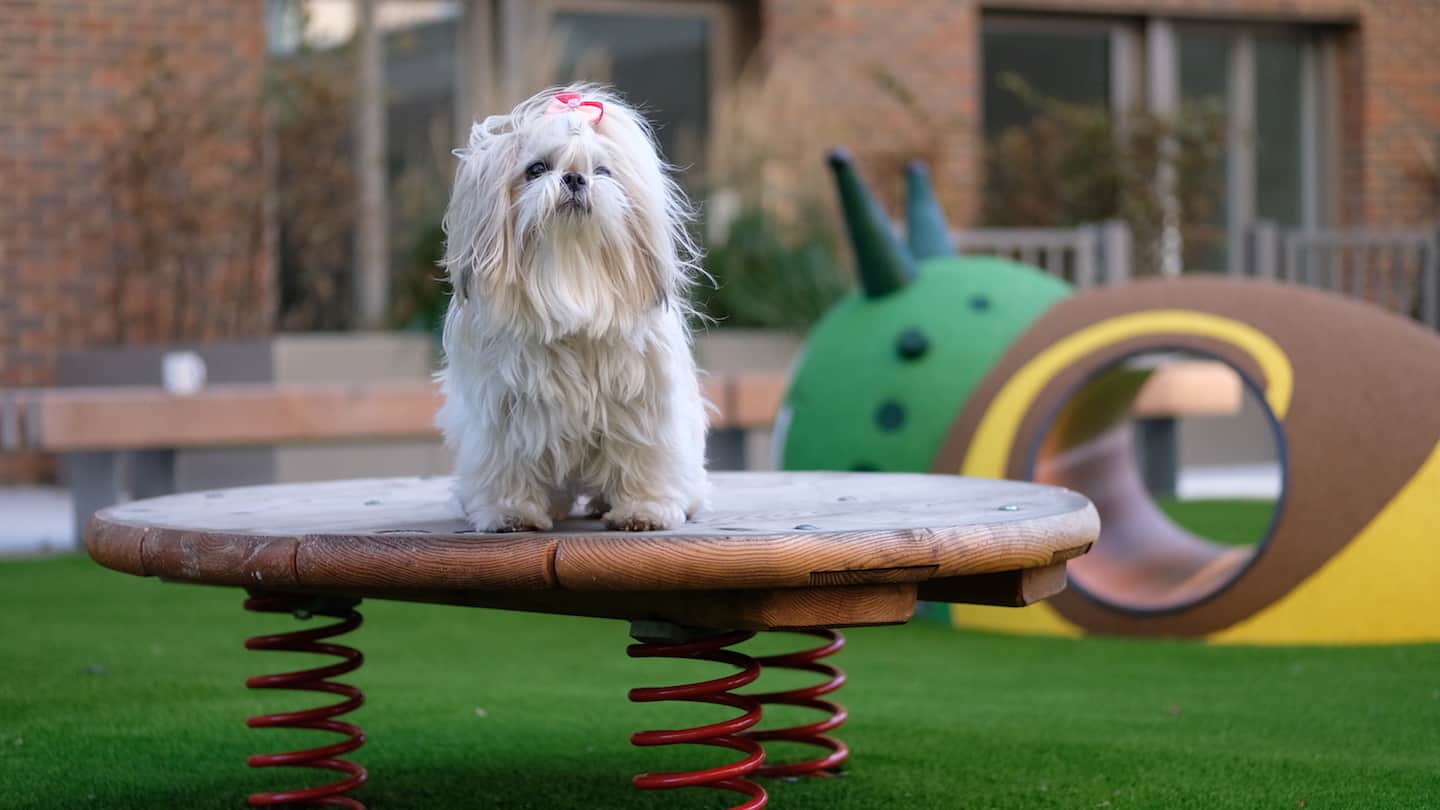 Belinha loves: Spending time in the communal garden and is rather partial to fruit…she is from Brazil after all.

Renting a Flat With a Dog in London at Fizzy Living | Lillie, Alexandra and Sam

Alexandra and Sam, originally from the coastal countryside of Norfolk (where being dog-friendly is the norm) moved to Fizzy Hayes to feel more at home in the ‘greener side of London’. With them came Lille, a five month old French Bulldog puppy. 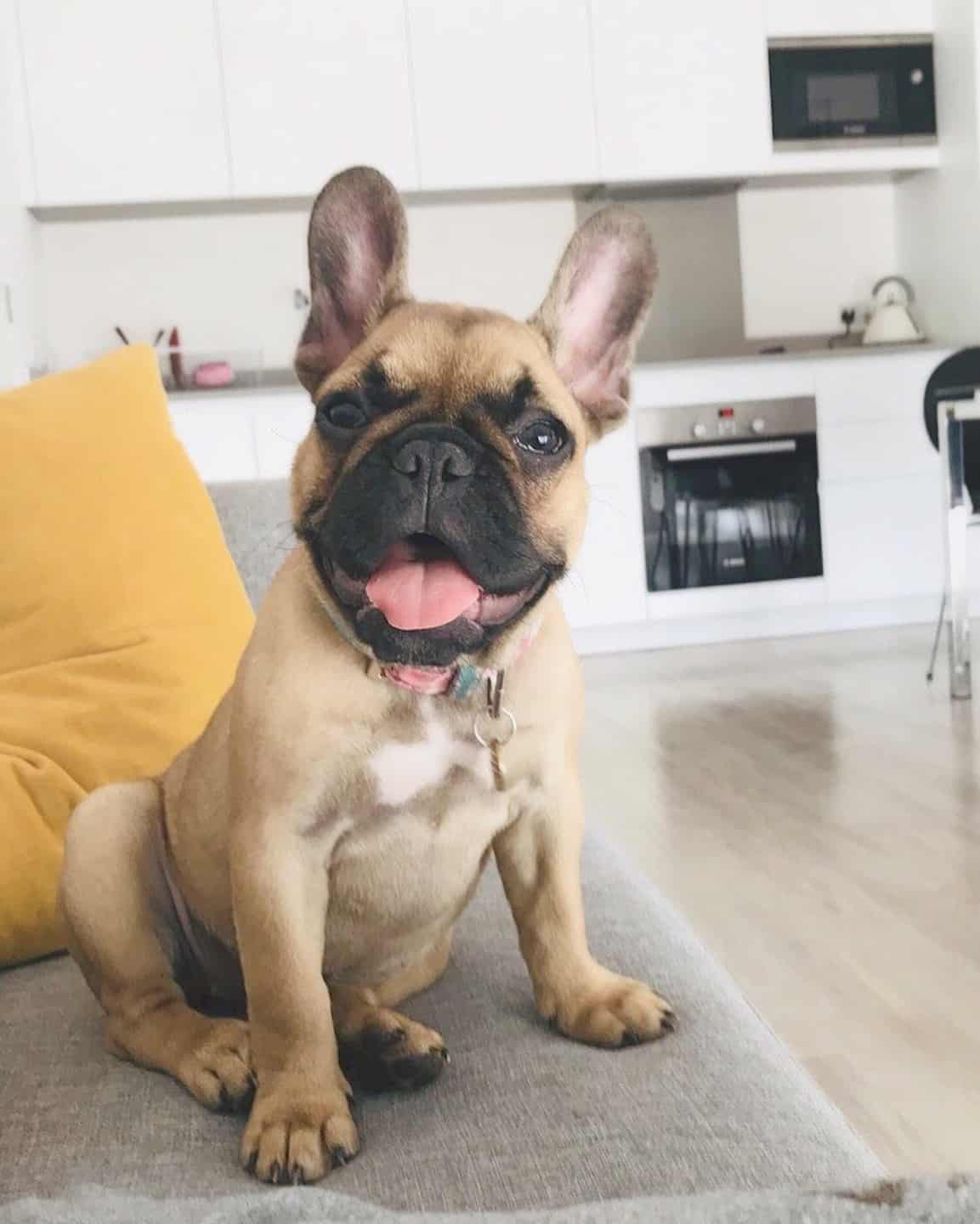 Alexandra, Sam and Lillie had previously been renting in Ealing. Although their landlord had allowed Lillie to live with them, he didn’t like it. So moving to Fizzy Hayes was a breath of fresh air for Alexandra and Sam and made them feel like they were back in Norfolk.

Little Lillie was recently on ‘house arrest’ recovering from a broken leg but at least when you live at Fizzy that’s not such a bad thing! Otherwise Lillie loves exploring the area and sniffing out dog-friendly places in nearby Ealing and Hammersmith. 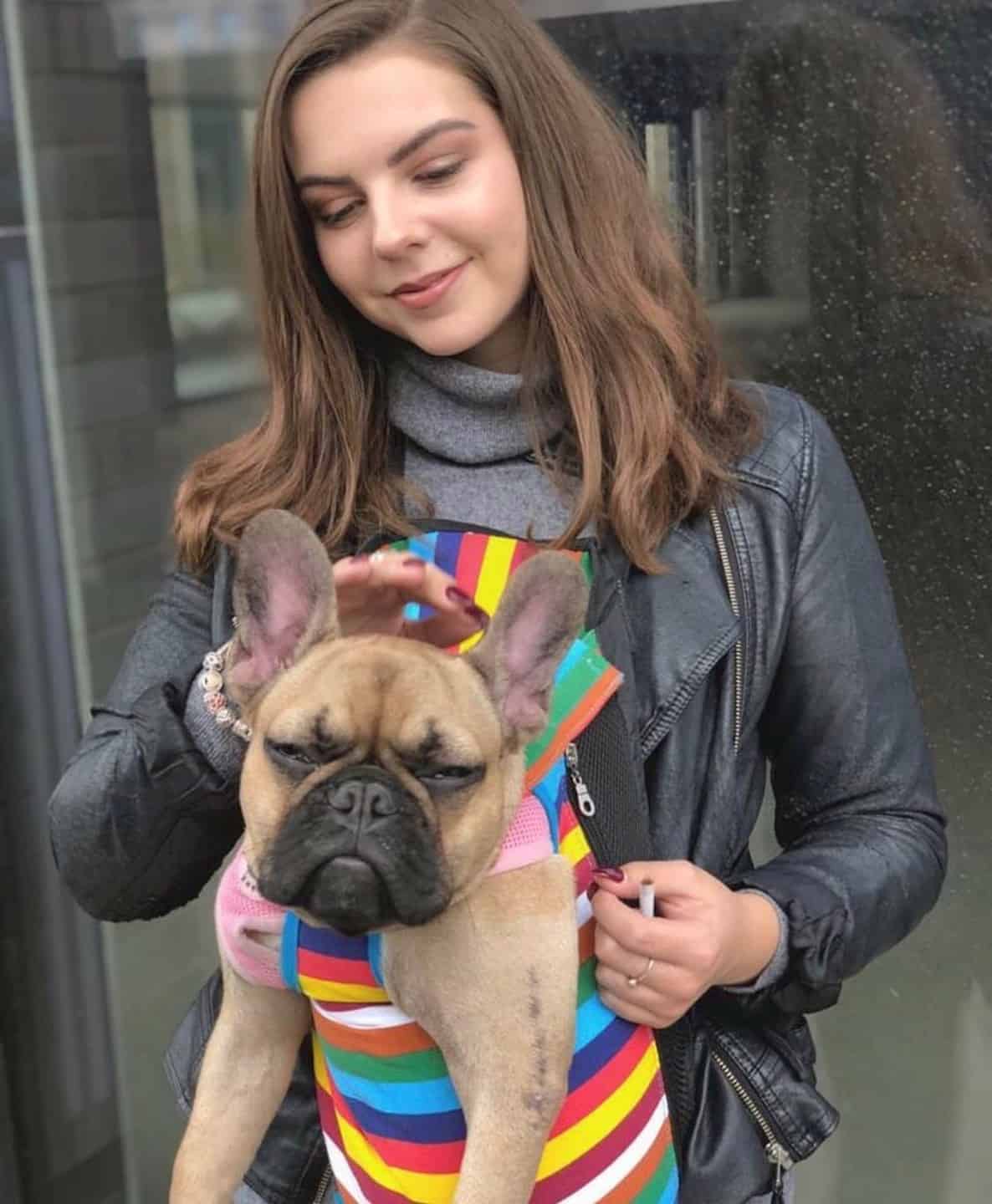 Lillie loves: Playing in the communal gardens, picnics in Hyde Park, cuddles and dog play dates (made easier by living at Fizzy of course).

We also heard from Milo, who you often see featured on the Fizzy Living social accounts and Milo’s human Sophie who works at Fizzy Living. 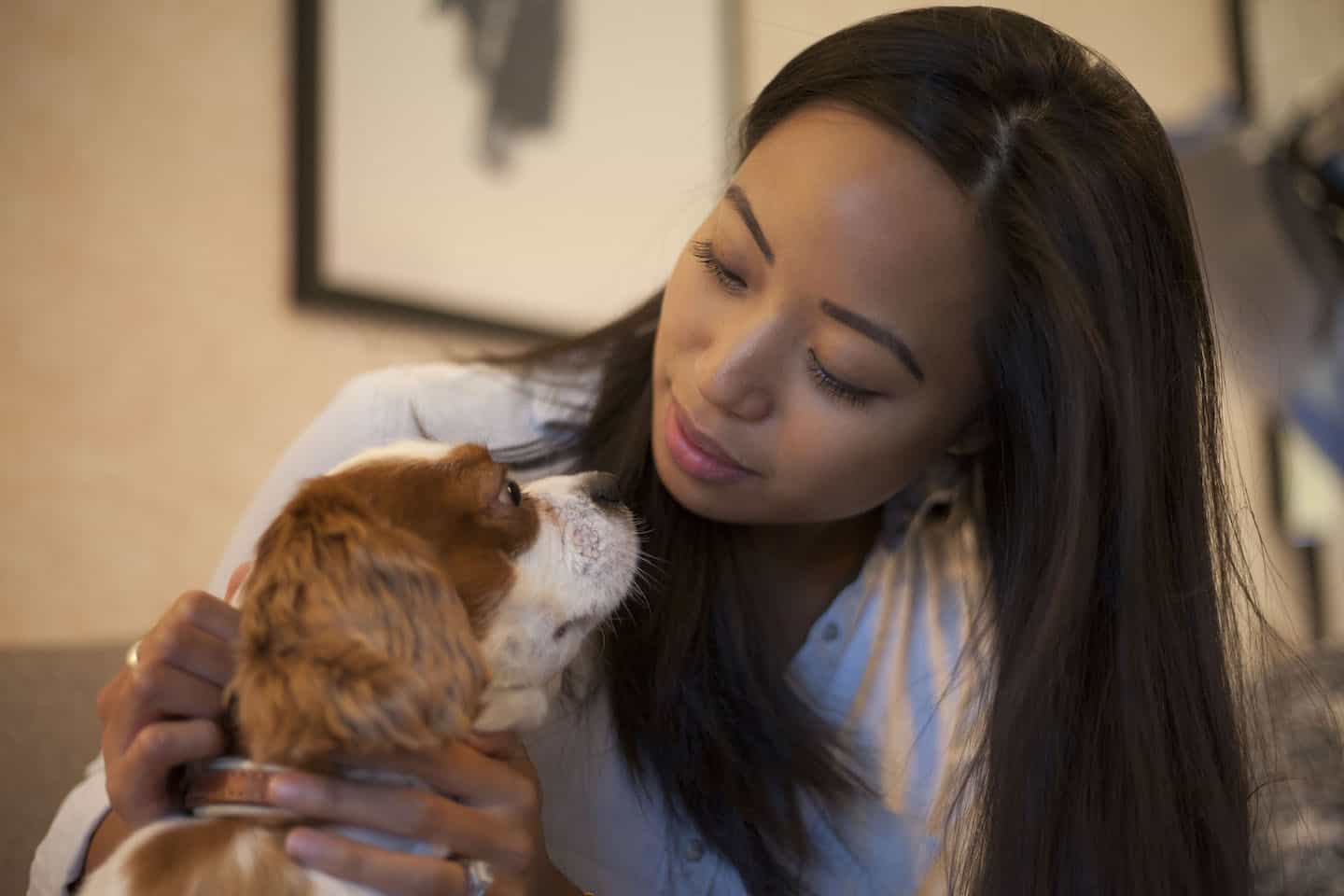 For Sophie, who is responsible for Fizzy’s Sales and Marketing strategy for the 1,000 flats in the Fizzy portfolio, being part of a community that welcomes pets is really important. Sophie told us…

“I know our residents who have dogs are so relieved when they find Fizzy because everyone, including the furry members of the family, can finally feel at home.

Living at Fizzy also means you have access to many neighbours who are always up for looking after your pets when you’re busy in the evening or away at the weekend. It’s like a free BorrowMyDoggy in each Fizzy building! The Fizzy team love getting involved too. Property manager Jason, who works at Fizzy Walthamstow, visits a flat everyday to cuddle a cat for 15 minutes because it has anxiety – it’s his favourite part of the day!”

Having a sense of community with the people who live near you is important. Sophie remembers a time when she was visiting Fizzy Stepney Green…

“I met one resident who was taking 3 dogs out for walks, none of which were hers. One dog belonged to her neighbour who was ill and the other dog owners were working late. It was so lovely to see and I think London could do with being more neighbourly like our Fizzy residents!” 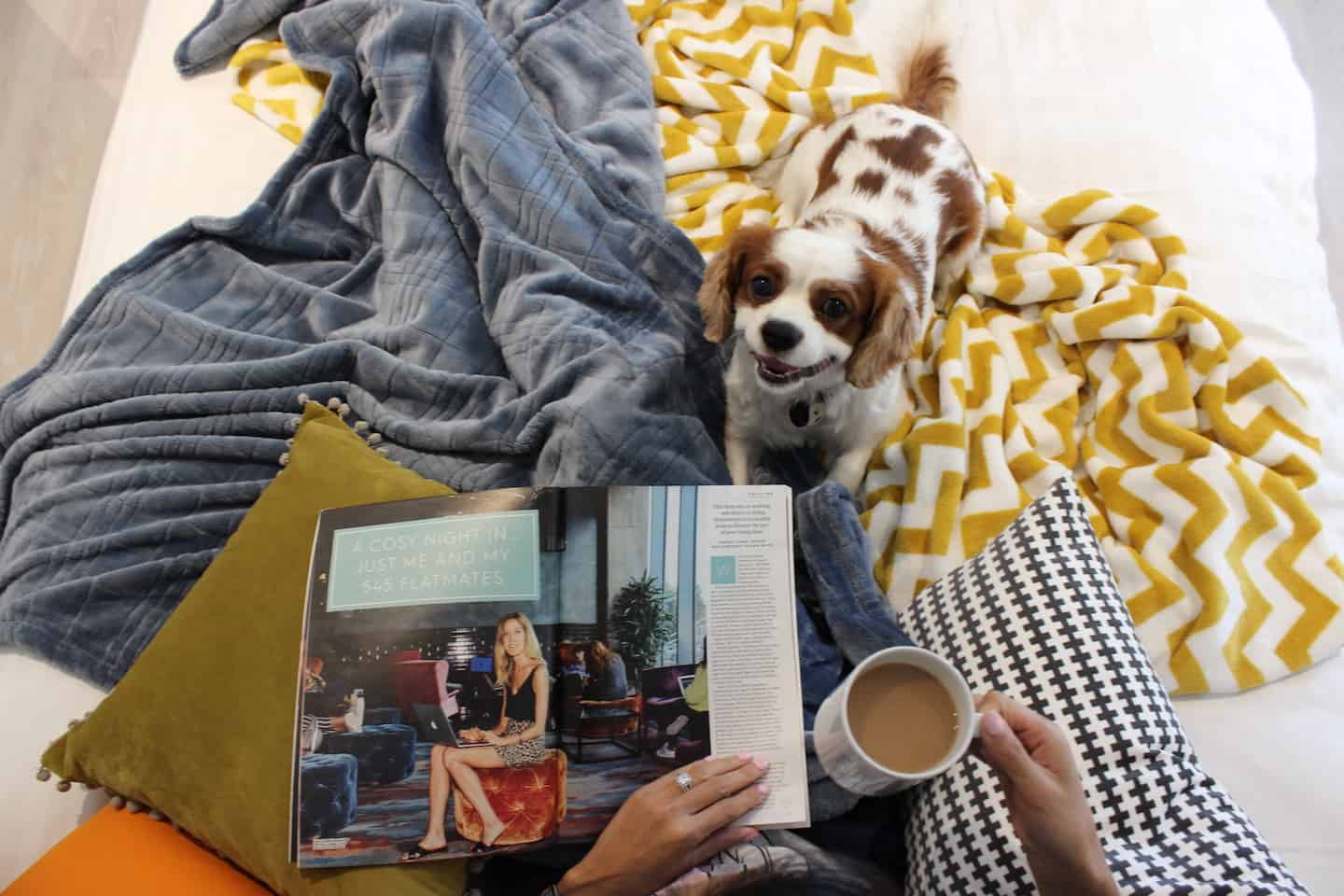 Milo loves: Walks and food! When not at work helping out test the pet stations, Milo enjoys walks along Regent’s Canal up to Victoria Park followed by his favourite meal of salmon, rice and bok choy.

When we asked all of these residents what was the best part about living at Fizzy, the unanimous answer was how important it is that their pets feel welcomed by their landlords and being part of a friendly dog-loving community.

Fizzy have tried to foster a great community spirit from day one so that people feel happier where they are living. Sophie also told us that Fizzy are about to launch a Fizzy App to make it easier for residents to communicate with each other. She hopes that residents will use it to start their own groups such as Sunday Dog Walking which will keep the community spirit growing.

The other unanimous answer to this question was how popular the pet stations were…no surprises there. 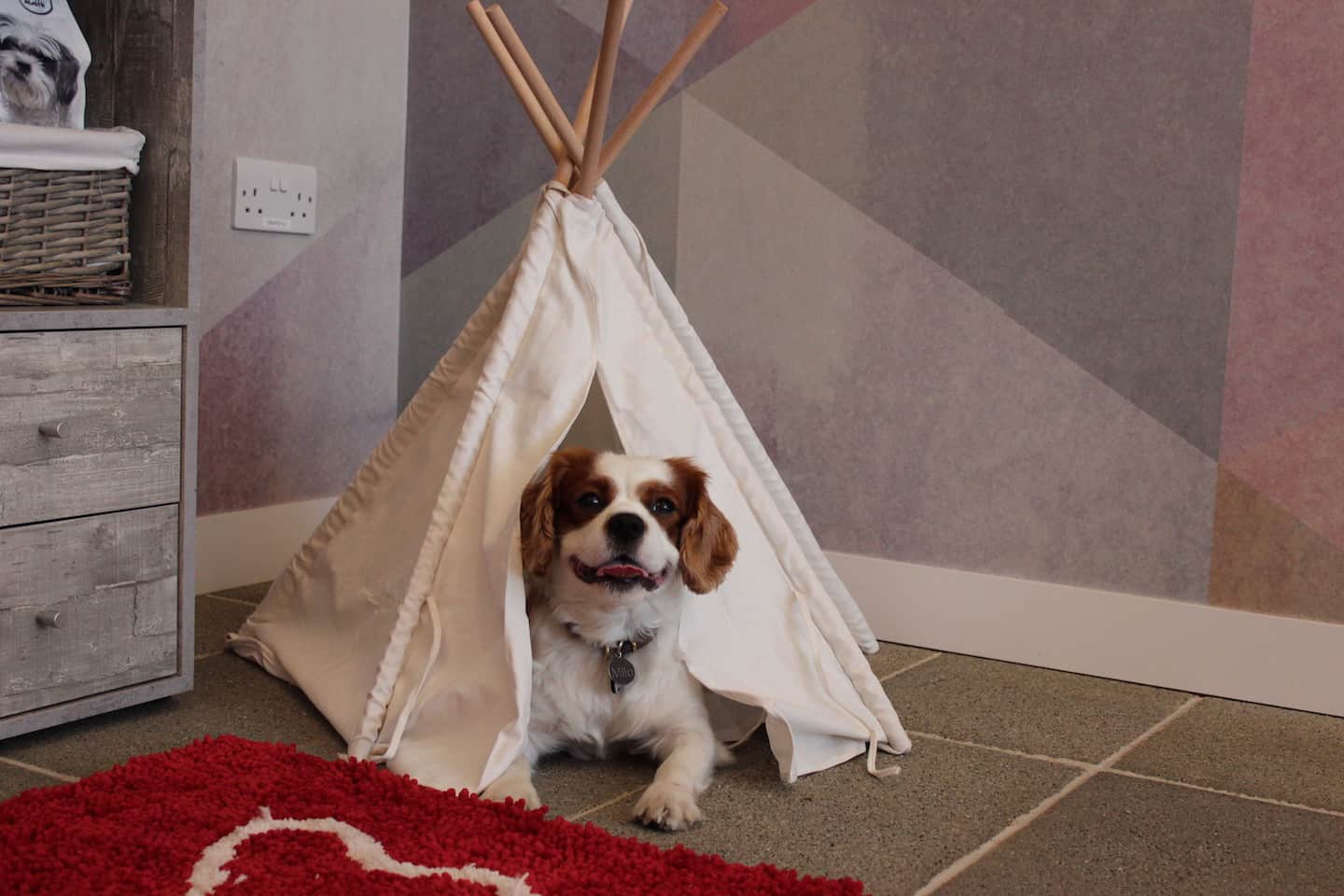 After getting to know some of the Fizzy residents for this feature, we can definitely say Fizzy deserves a big paws up for being a genuinely pet-friendly landlord and creating a strong sense of community amongst the people who live there.

Well done Fizzy, you are doing a pawsome job of tackling the task of ‘reinventing renting’ for dog owners in London and for that we applaud you! 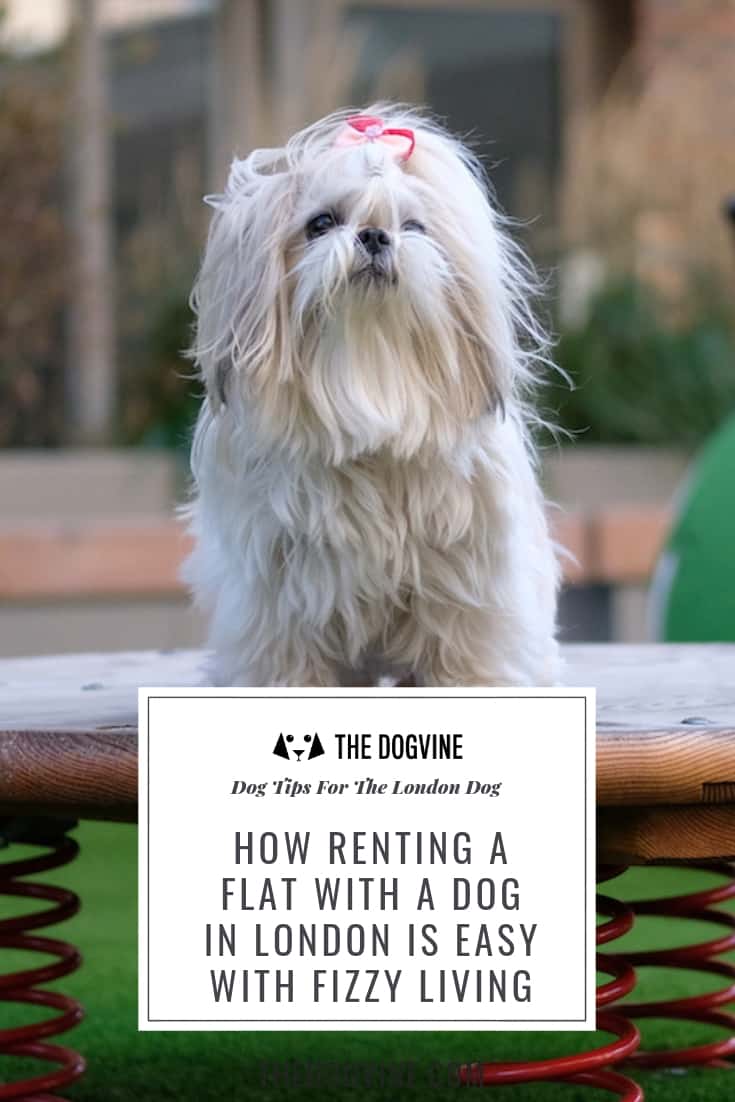 This is a sponsored collaboration with Fizzy Living. This does not influence the content of this feature which is based on the genuine opinions of those involved. Photos courtesy of Fizzy Living.