Worried about your pet when you’re not home? You don’t have to be any more. We’re super excited to tell you about Furbo, the world’s first treat-tossing dog camera and how it helps you stay connected to your pup when they’re home alone. Now you’ll never need to wonder what you’re pet is up to or worry about them feeling lonely when you’re gone. 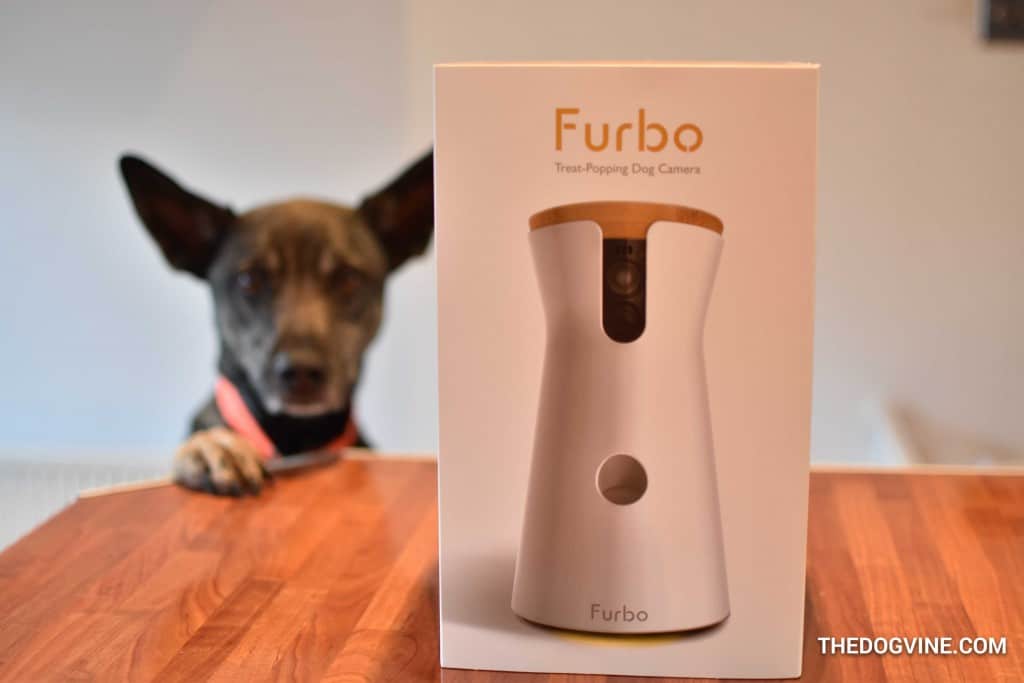 What Is The Furbo?

The Furbo is the first product to come out of US Pet Tech start-up Tomofun and was launched mid-last year on Indiegogo. Following a fantastic response and reaching 950% of it’s goal by the end of the campaign, it was the most successful Pet Tech campaign ever. 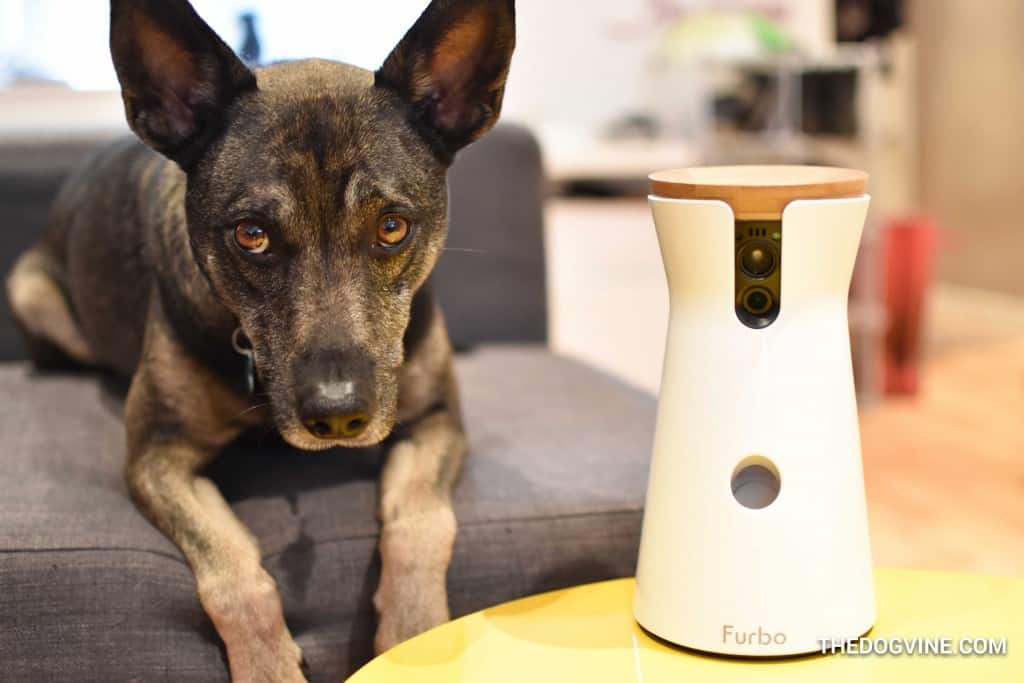 I’ve had a petcam to keep an eye on my dogs when I go out for several years now. Although I don’t leave them for long periods it still puts my mind so much more at ease when I can check in on them. However, until now this has been a one way experience and a pretty rubbish one at that (think poor picture quality etc.) but at least I could check they were fine.

With the Furbo it has quite simply revolutionised my petcam experience. From my phone I can watch a live stream of what they’re getting up to, talk to my dogs via the two-way audio and toss them a treat to reward them remotely. Even better, the Furbo sends me a ‘Bark Alert’ notification when my dogs are barking to tell me something’s up. The Furbo was created over a two-year period with the help of over 5,000 dog owners, vets and dog trainers and it’s clear a lot of thought has gone into it.

The first thing that strikes you is the Furbo’s minimalist design. It doesn’t even look like a petcam. It’s a super stylish piece of tech that will look good wherever you choose to put it. Measuring 15 x 12 x 22.5 cm and weighing 798g, although larger than a traditional webcam, it still blends in perfectly. 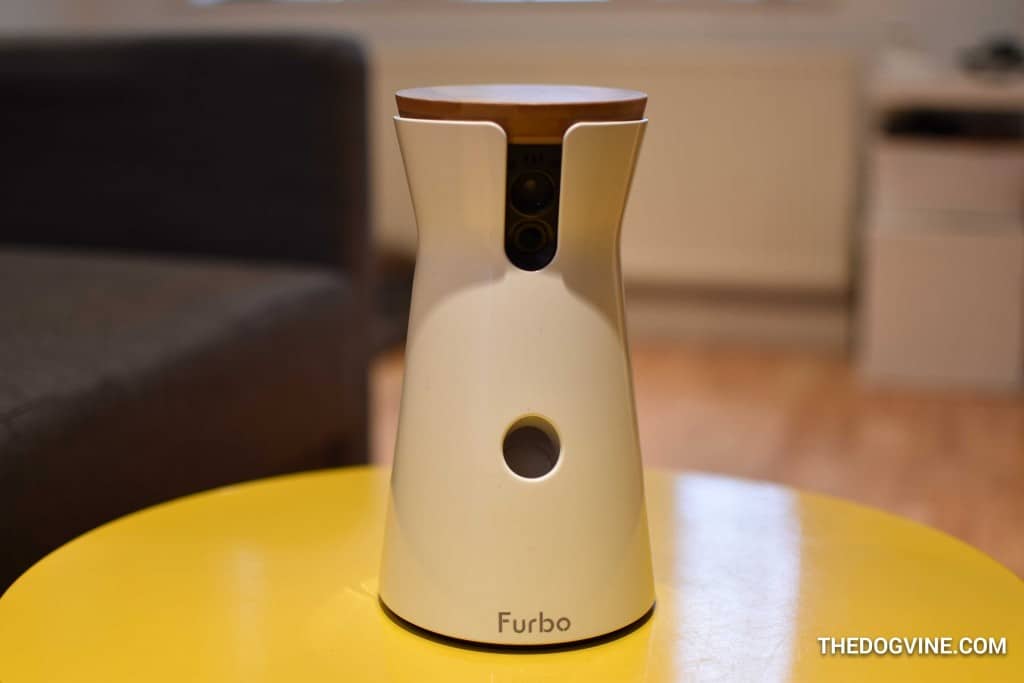 The 720p HD camera features a 120° wide-angle lens, 4x digital zoom and infrared LED night vision for seeing what you’re pet is getting up to. Quite honestly I couldn’t believe the clarity of the picture on the Furbo, the picture quality was fantastic!

I had audio on my previous webcam but it was only one-way . Not on the Furbo. It has a built-in speaker and ultra-sensitive microphone, which means you can not only hear what’s going on but your pup can be reassured by the sound of your voice. This can help overcome separation anxiety and you can also further overcome this by rewarding positive behaviours via the treat-tossing dispenser.

This has got to be the BEST FEATURE EVER! Your dog will love it and trust me so will you. Pop some treats in the Furbo before you go out and then you can dispense them remotely from the app on your phone . The only downside here is that it is so addictive  – on the first day we dispensed the treats 25 times!  So you have to remind yourself to stop although I’m sure your dog would prefer you didn’t. Fortunately there is a helpful counter that keeps track of how many times you’ve ‘played’. I should point out that there have been one or two occasions where the treats have become stuck on the way out but not so many to cause concern. 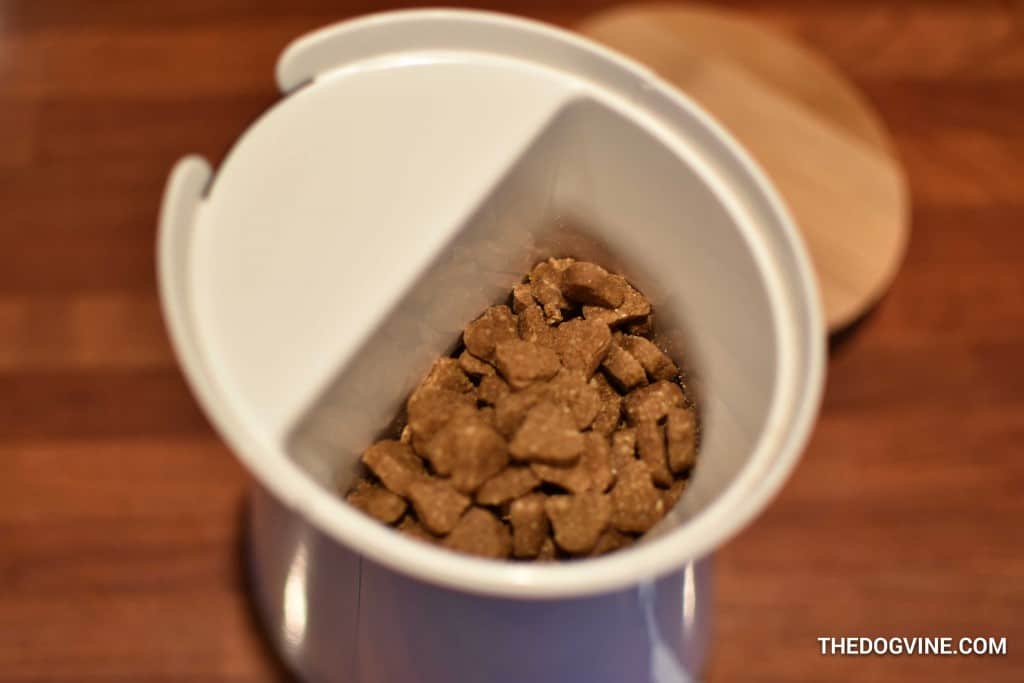 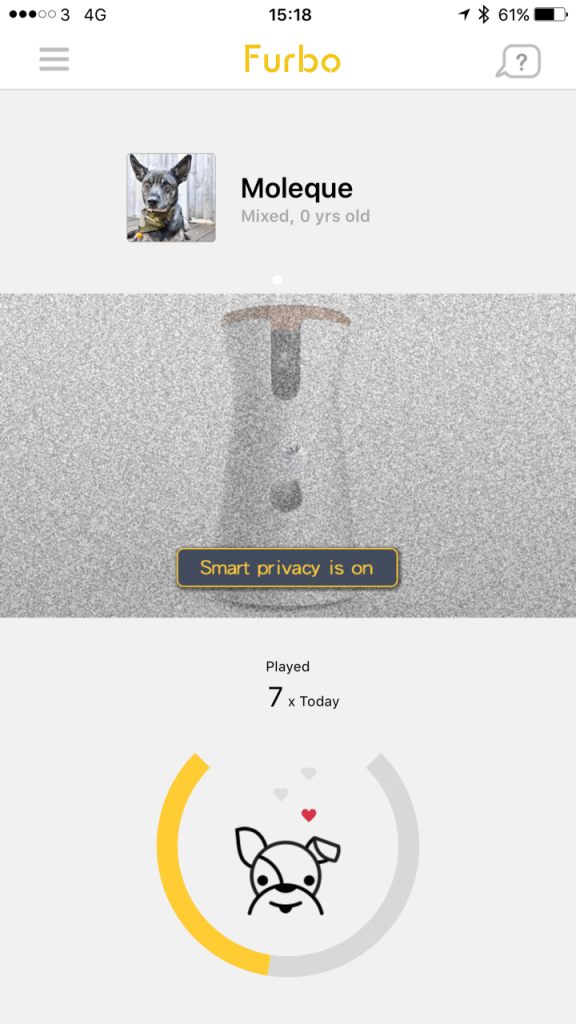 The camera makes a clicking sound before dispensing the treats but you can record a prompt in your voice instead. Moleque took a while to get used to it but soon realised that this strange device was home to treats. 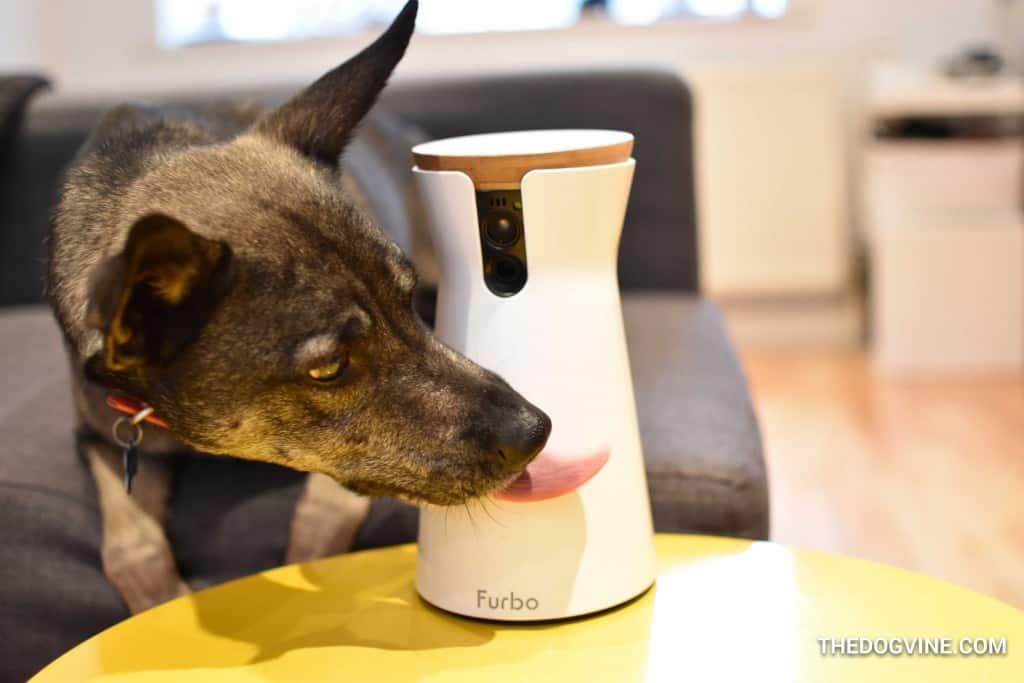 If your dog starts barking, push notifications are sent to your phone or smart watch prompting you to see what’s going on and reassure your pup if needed, genius! There is also a ‘Privacy Mode’ where the app detects when you get home and turns the barking alerts off.

Lastly, the Furbo has WiFi and Bluetooth connectivity so you can control the camera from your phone (iOS and Android app available), tablet or even Apple Watch.

Setting Up The Furbo

Here’s what we got in the box..the Furbo camera, the power supply and cable plus a set up guide. The Furbo is dead easy to set up and it was as simple as connecting the first time via Bluetooth and then once the Wifi network was detected we were away. Previous webcam experiences involved connecting to the router with an ethernet cable and other nerdy stuff so this was a refreshing change and means even technophobes need not worry. 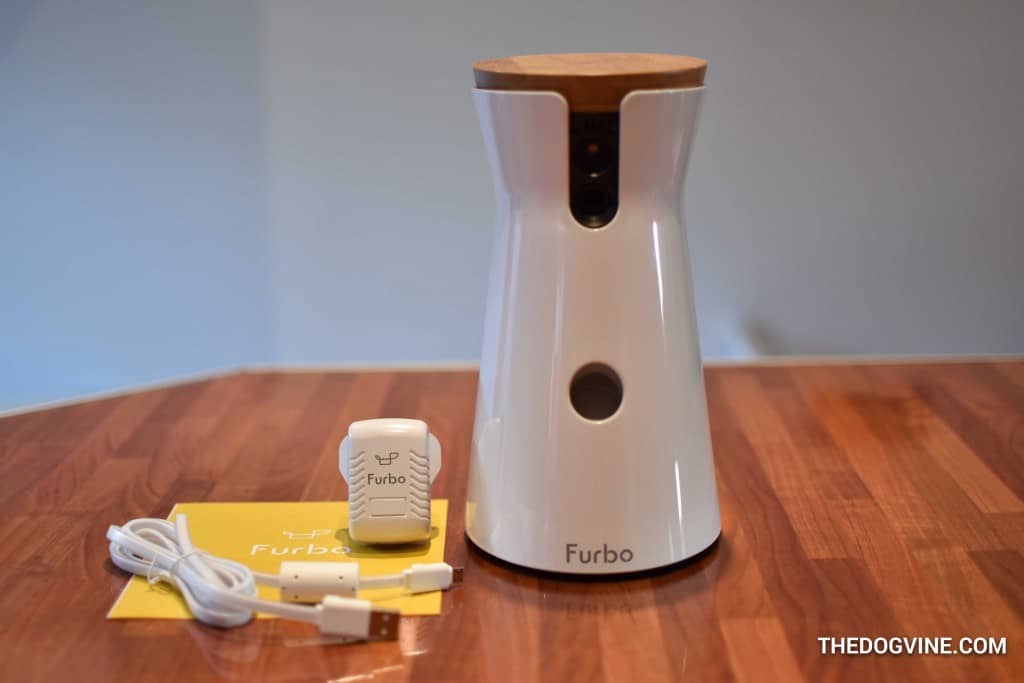 Getting Used To The Furbo

At first your dog may be unsure of the Furbo but there is a useful training video on the app to help get your pet used to it. There’s  also a Furbo VIP Facebook Group where you can ask questions of Furbo and fellow users or give feedback.

After Moleque’s initial wariness of the Furbo he soon decided that self-service was also permitted! To avoid this, make sure you position the camera just out of reach if your dog is an inquisitive pup…

Some of our followers on social media have said that they would be worried about their pooch knocking over the Furbo. Aside from making sure you place it out of reach, it comes with double-sided sticky tape on the bottom so you can fix it securely to a surface. We also later discovered that the Furbo has tripod mounting sockets on the bottom so you can attach it to a tripod. Although this is one feature we haven’t yet needed to explore!

Finally, another cool Furbo feature is the built-in light at the bottom which changes colour according to what’s going on. When the Furbo is connected but idle, the light is yellow but when you’re on the other end either watching or about to dispense treats the light changes to blue. As dogs can actually only see two colours…yellow and blue this gives them the ability to recognise when you are there.

Disclaimer: Furbo were kind enough to send us a camera to review but this is an honest independent review – we only write about products we genuinely like and believe in.

As a seasoned (and up till now mostly disappointed) petcam user, I was ready to be impressed by the Furbo and I certainly was. The set up was a breeze, it looks great and most importantly it gives me peace of mind when my dogs are home alone and makes me feel more connected to them. Clearly a lot of time and research has gone into the features of the Furbo and it really is a well-designed piece of kit. Plus the novelty of how much fun it is to be able to dispense treats remotely still hasn’t worn off and I don’t think it ever will. Something I’m sure Belinha, Moleque and Nina, will be very glad about.

The Furbo is available in the UK exclusively through Amazon.co.uk for £224 and although this price tag may seem a little pricey,  having owned a cheaper petcam and now tried the Furbo, it’s certainly a case of you get what you pay for. To find out more about Furbo visit furbo.com. 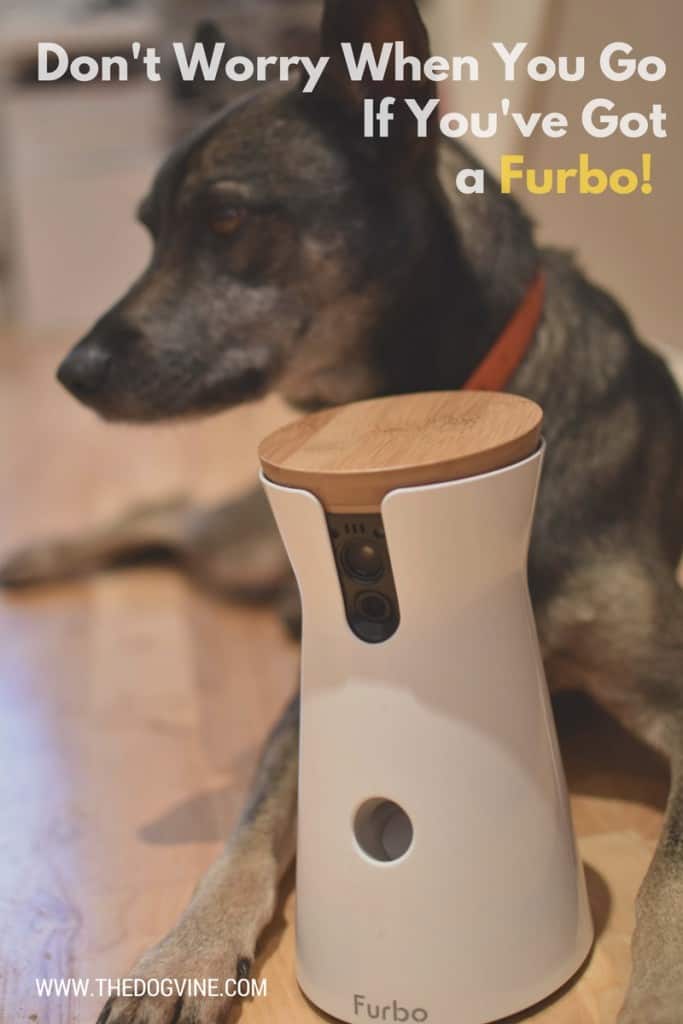