With the snowy and rainy weather recently it’s been the pawfect opportunity to put Dog Trousers from The Dog Trouser Company to the test. I decided to try them on Belinha as opposed to Moleque as being smaller, she often comes back from a wet walk with a very dirty and muddy tummy. Read on to see if Dog Trousers kept Belinha clean and dry in our Dog Trousers Review… 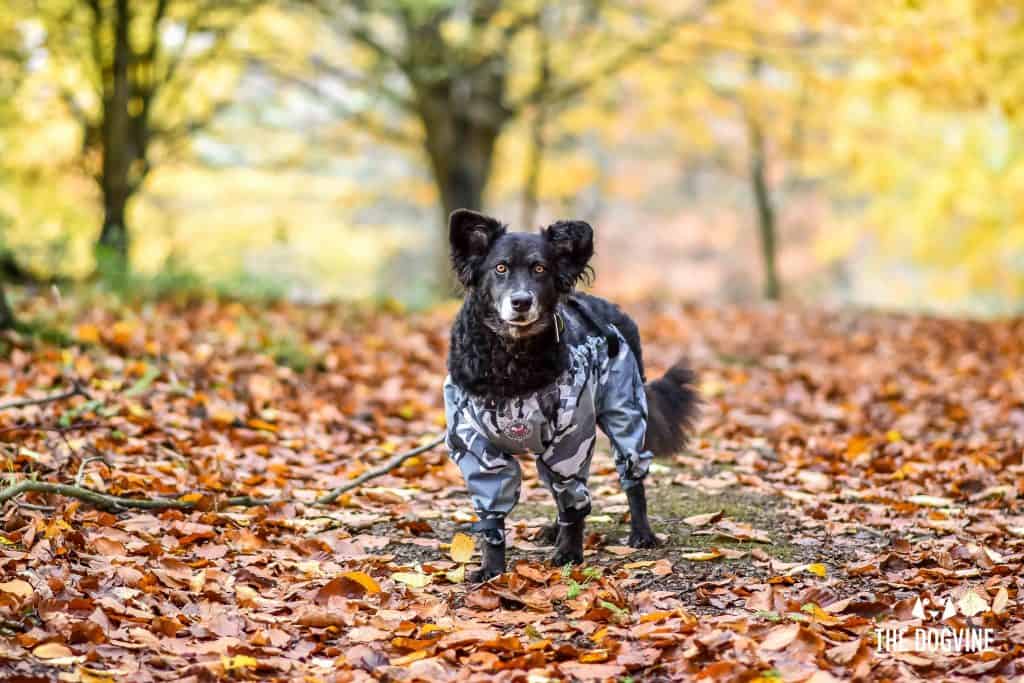 You may have heard us talk about Dog Trousers on the blog before  – we first spotted them at The Chiswick House Dog Show in September (trust me they stood out) so followed up with Harriet Sinfield-Day, founder of The Dog Trouser Company to find out more about them which you may have seen in our post ‘Dog Trousers Are a Thing And They’ve Arrived In The UK’.

Harriet kindly offered us the chance to try Dog Trousers out so we’ve been waiting for the rainy weather (never thought I’d say that) to put them to the test! 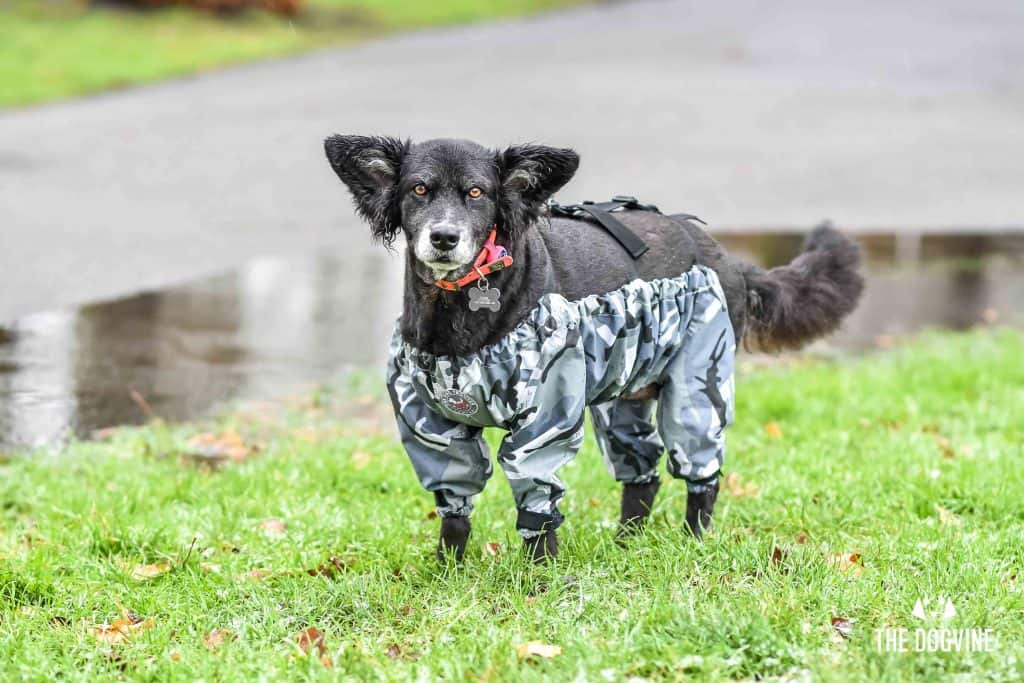 What Are Dog Trousers  –  A Quick Recap

For the full Dog Trousers story, have a read of our previous post on them. But to recap, here are the key facts: 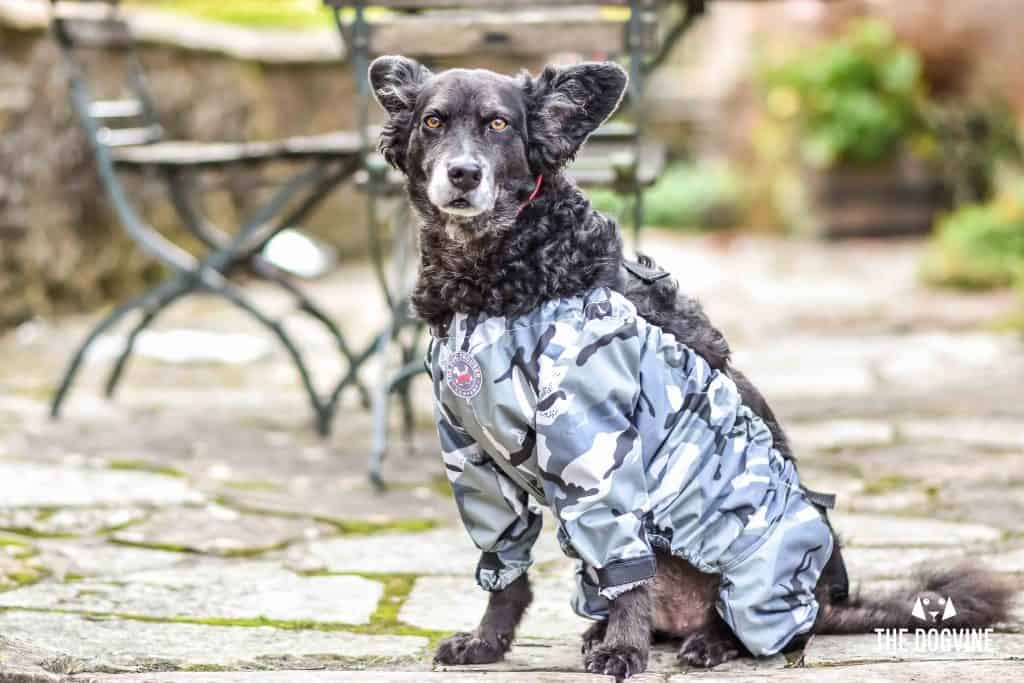 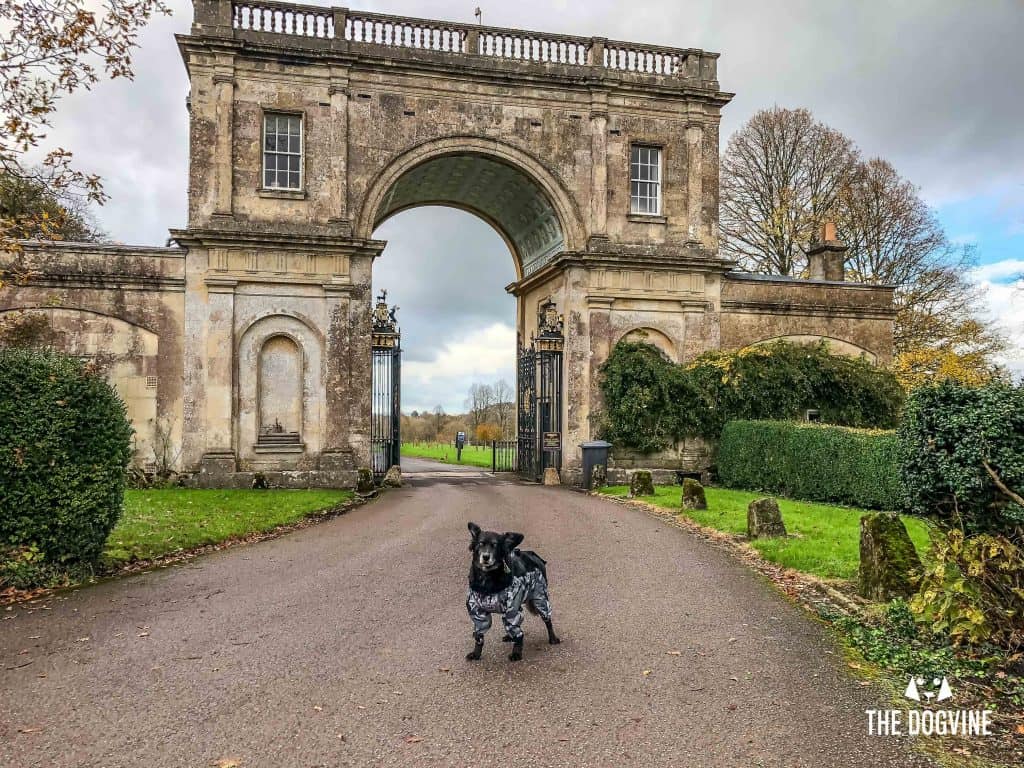 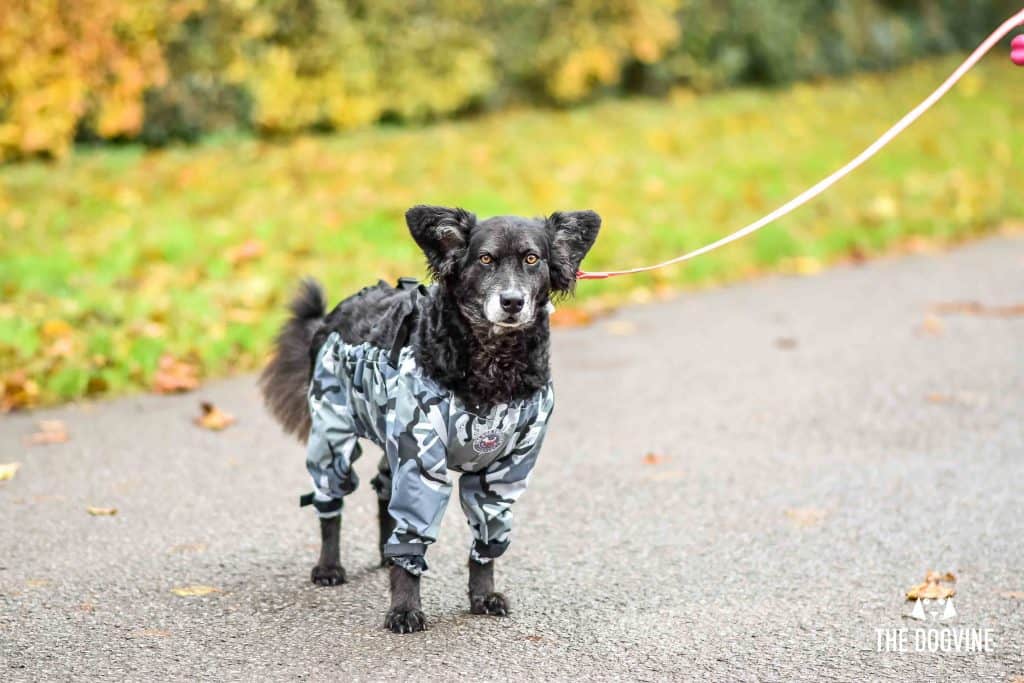 Dog Trousers Review – What Did We Think?

From my perspective I think they’re a brilliant idea! I really don’t like the fact that when we come back from a wet walk (or even when it’s just wet on the ground), I wipe a lot of black gunk off Belinha’s tummy and legs. She often shakes the muck all over the hallway if I’m not quick enough too so I was really hoping that Dog Trousers would solve both problems! 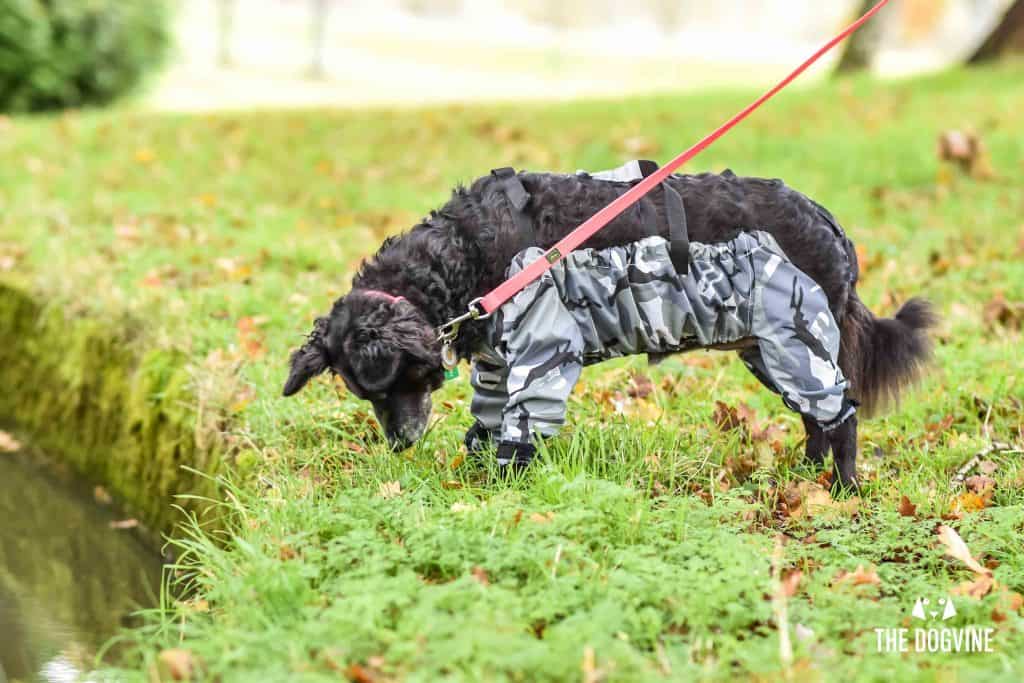 Belinha on the other hand really wasn’t sure about the concept of Dog Trousers to begin with. Probably not a surprise seeing as neither Belinha nor Moleque are the type of dogs that wear clothes other than bandanas or bow-ties. The first time I put Belinha in her Dog Trousers she simply refused to move and did a very good impression of a statue! With the help of some tasty treats and lots of positive encouragement, she slowly warmed up to the idea.

Harriet had advised that some dogs may take a while to get used to them (she has found on average 5 ‘goes’) and advised that the dog trousers only be put on at walkies time and with lots of treat encouragement. Following this advice, we soon made progress. I’d also got an inkling that Belinha was simply putting her paw down and deciding not to move in them when on one attempt she spotted the neighbours cat and took off at top speed in her dog trousers. She must have realised that she’d given the game away as she suddenly stopped still and went back to statue mode. Soon after that, the dog trouser statue impressions were no more!

So, after getting over this (often quite entertaining) introduction to dog trousers, we were able to put them to the test. As Belinha is not the kind of dog that leaps headlong into rivers or rolls around in the mud, my primary goal of our Dog Trousers review was to see if they kept her clean on the leg and tummy area and avoided yucky splashback during wet and/or muddy walks even just to the local park. 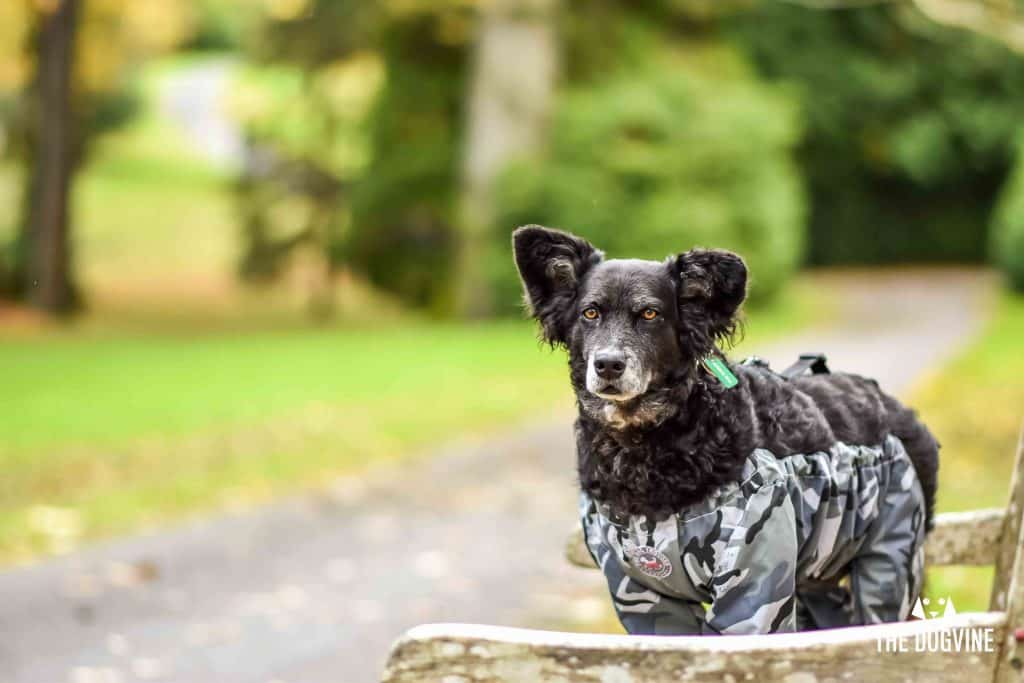 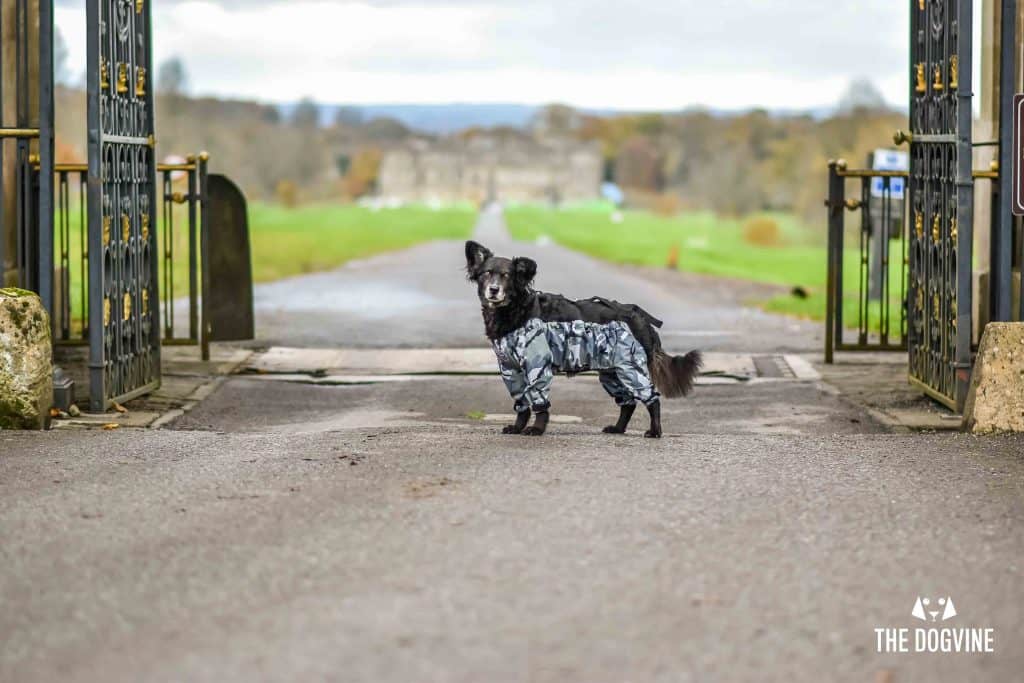 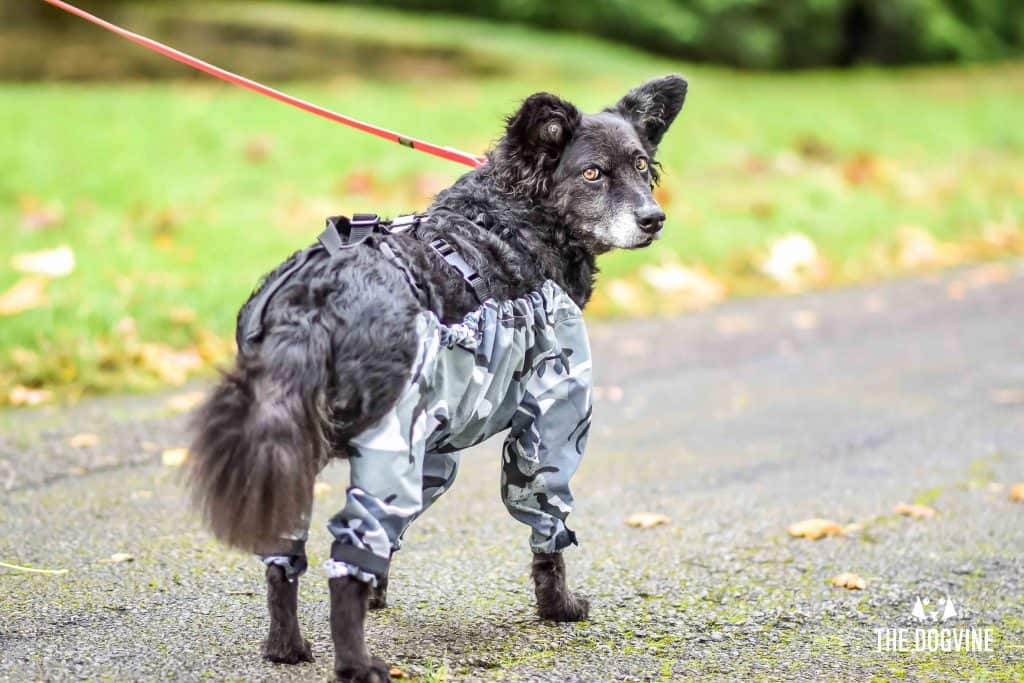 I’m pleased to be able to report that they did. The horrible black gunk I was so used to wiping off poor Belinha was now on the Dog Trousers. As they dried off, the gunk simply brushed off the trousers too which was an added bonus. Her legs and belly were clean and dry which was a huge improvement and it was just her feet (below the velcro area) and the small area that is left open underneath to not interfere with the call of nature, that got a bit grubby. We also got lots of compliments when out and about wearing our Dog Trousers with the consensus being that they were an ingenious idea (and that Belinha looked very cool in her ‘camo pants’). 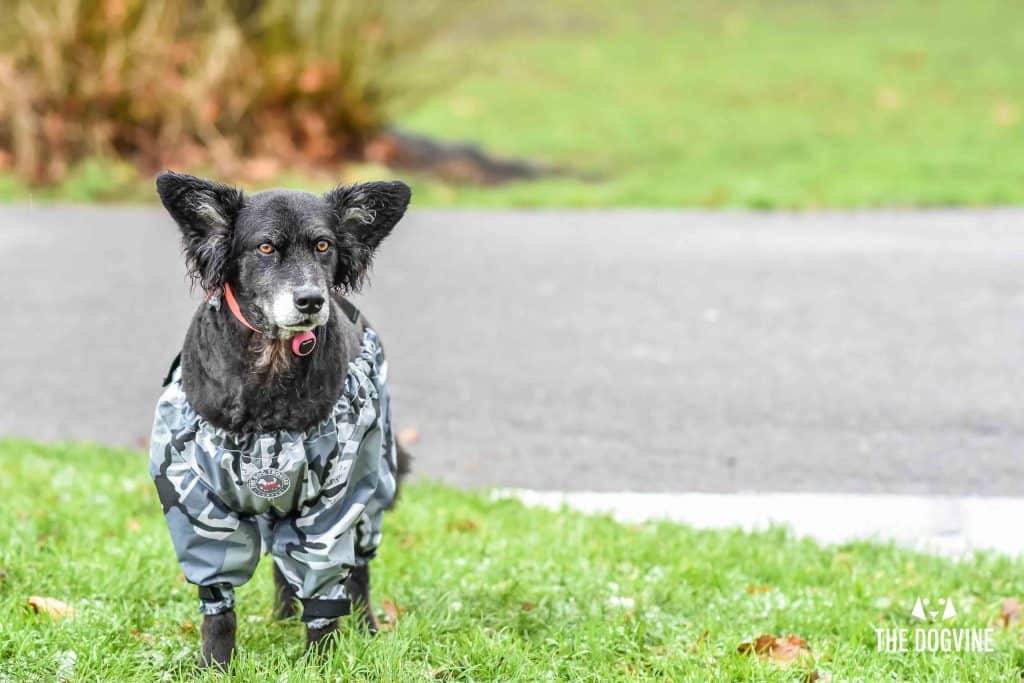 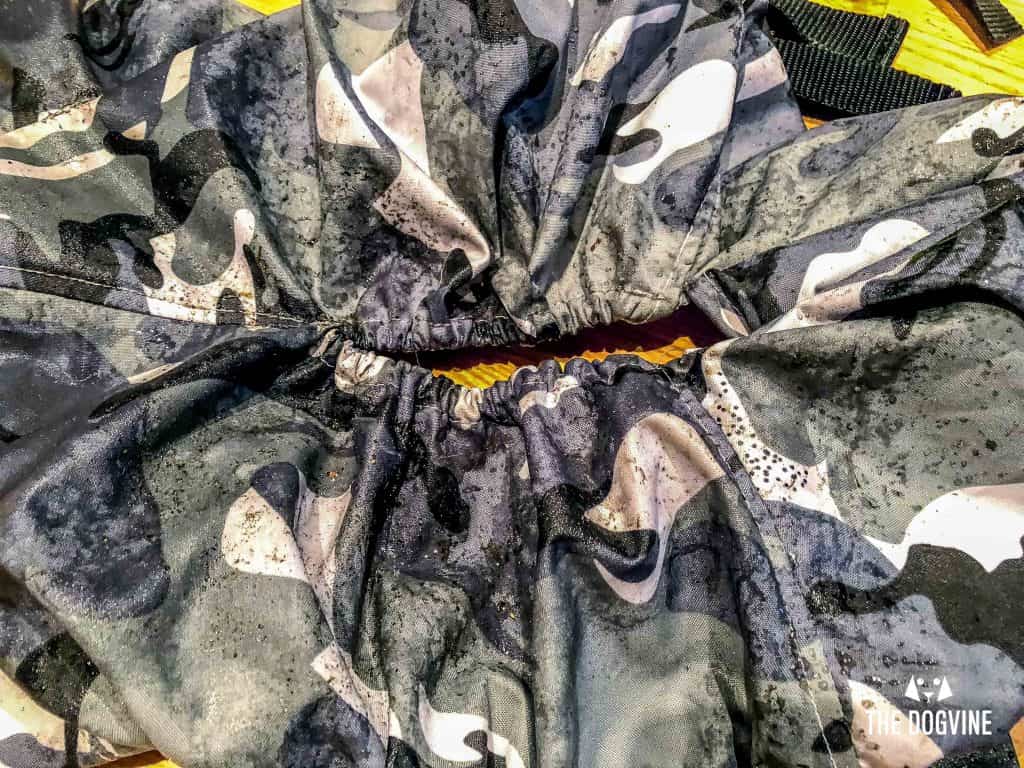 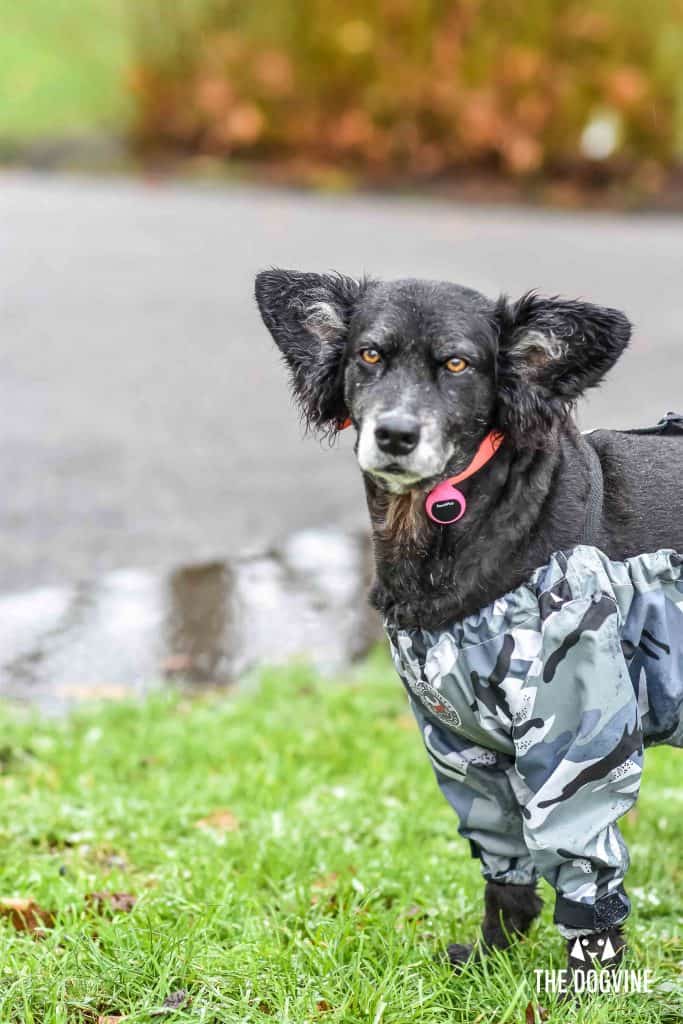 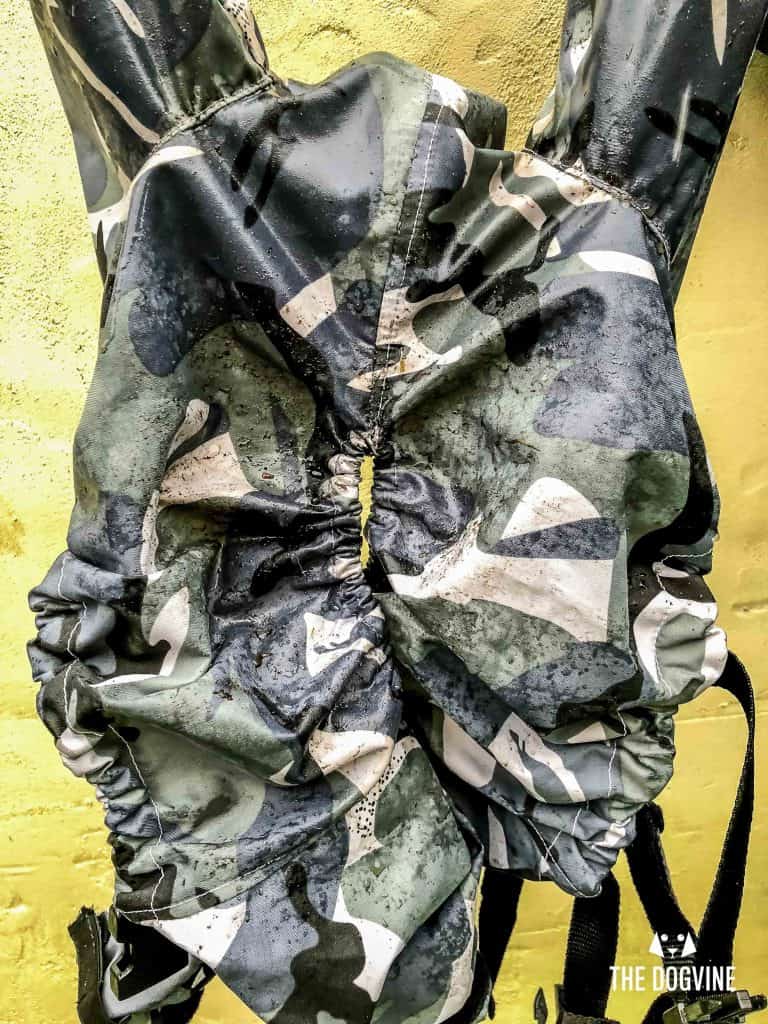 It was also clear from putting Dog Trousers to the test that the quality of the material was fantastic. It felt like a good quality rain jacket for humans so I felt comfortable knowing that Belinha would be protected but wouldn’t overheat in them. Dog Trousers are not cheap but we can understand why as the quality is high. If you have a dog that is prone to a muddy tummy in our lovely English weather then I think they will be a worthwhile purchase. 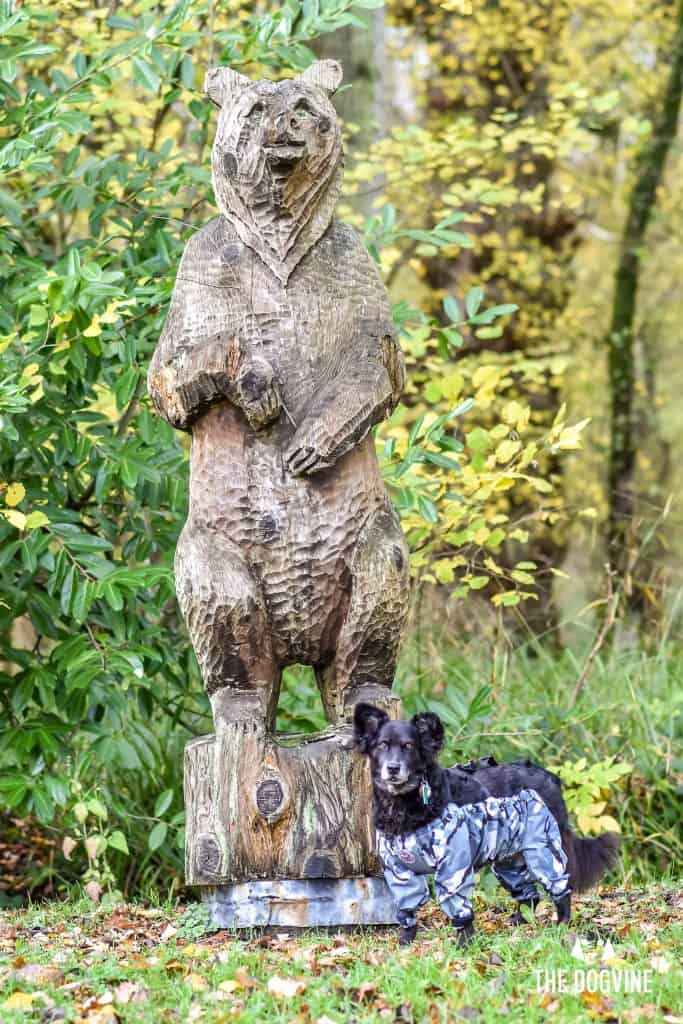 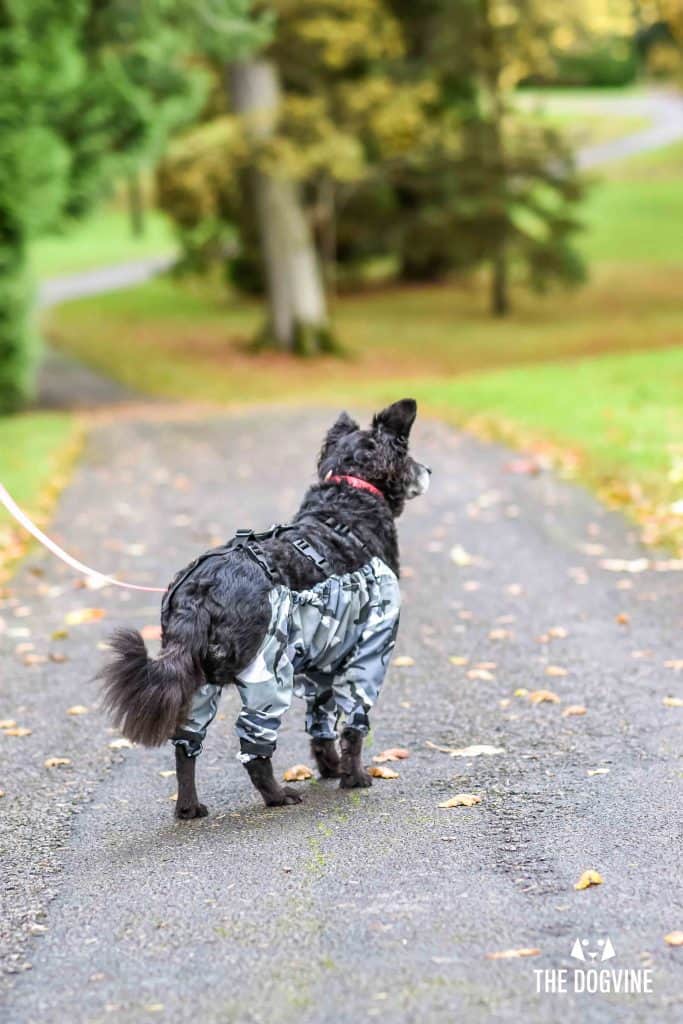 And finally, £2 from the sale of each pair of Dog Trousers is donated to 1 Dog at a Time Rescue UK, which cares for and re-homes abused Romanian street dogs so that makes it a double paws up from us. 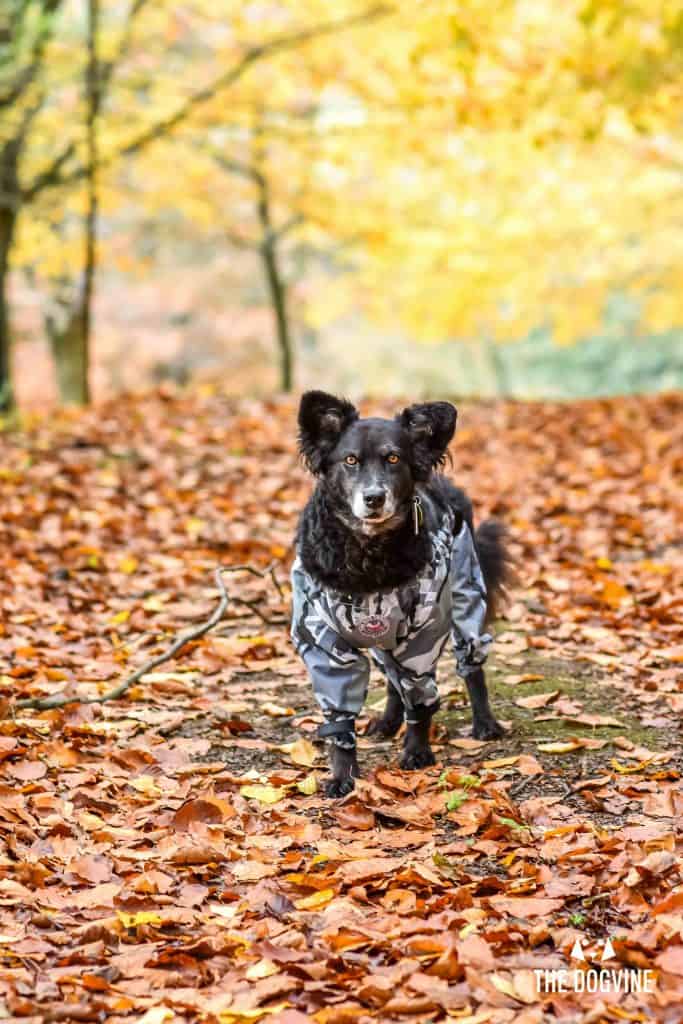 Disclaimer: The Dog Trouser Company were kind enough to send us our Dog Trousers to review but this is an honest review – we only write about products we genuinely like and believe in.