It’s not often that you find a London attraction that welcomes dogs, but one of those that do is London’s dog-friendly Tower Bridge. And not only is this an iconic London landmark but it’s also home to an exhibition bringing to life the history behind one of the capital’s most well-known architectural attractions. 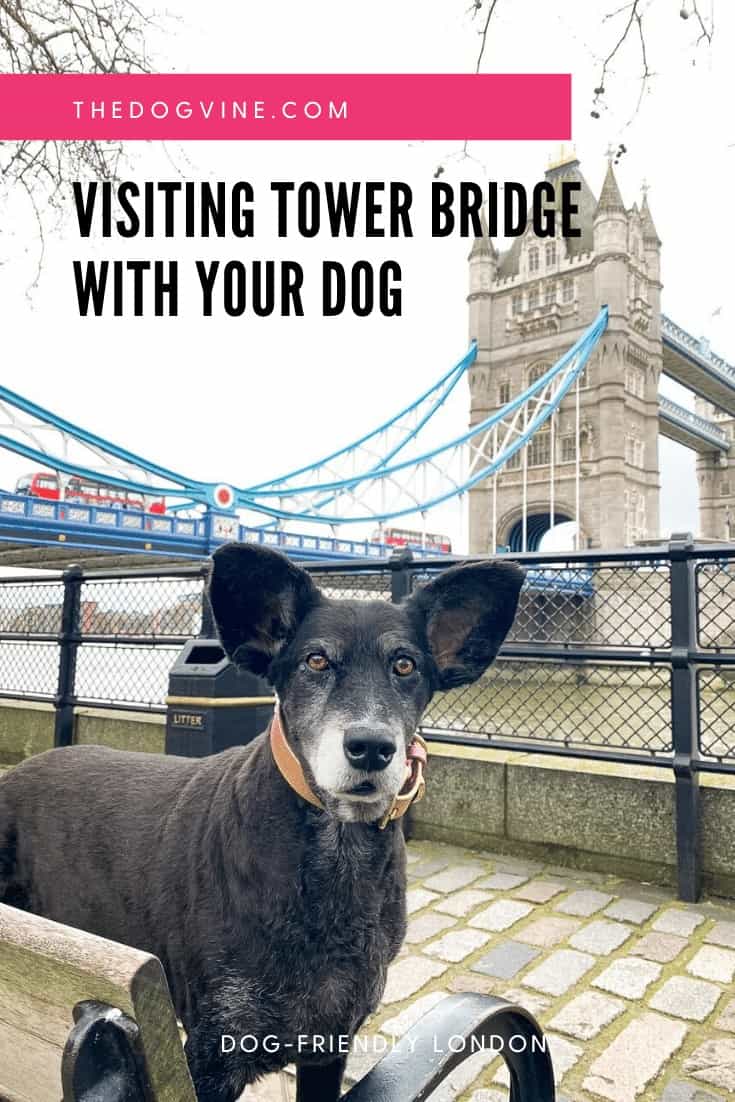 Living in London, it can be easy to take seeing this impressive bridge for granted, so it can be a refreshing experience to be a tourist in your own city and what better way to do that than with your dog by your side. 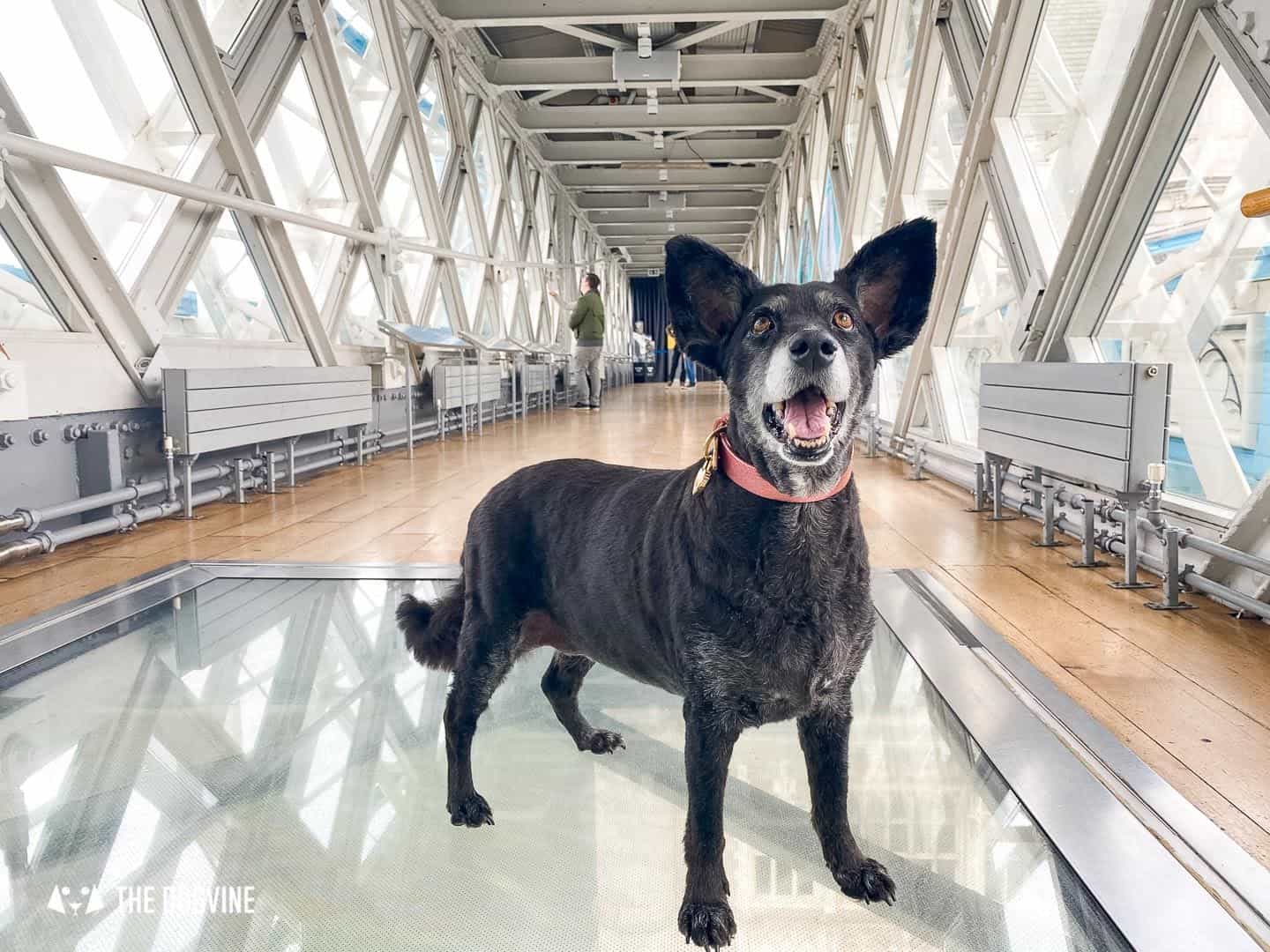 As Belinha is getting older (she’s now 13), for me it’s important to create as many memories as possible of the things we do together and the same goes for our pup pal Claude and his mum Anita. 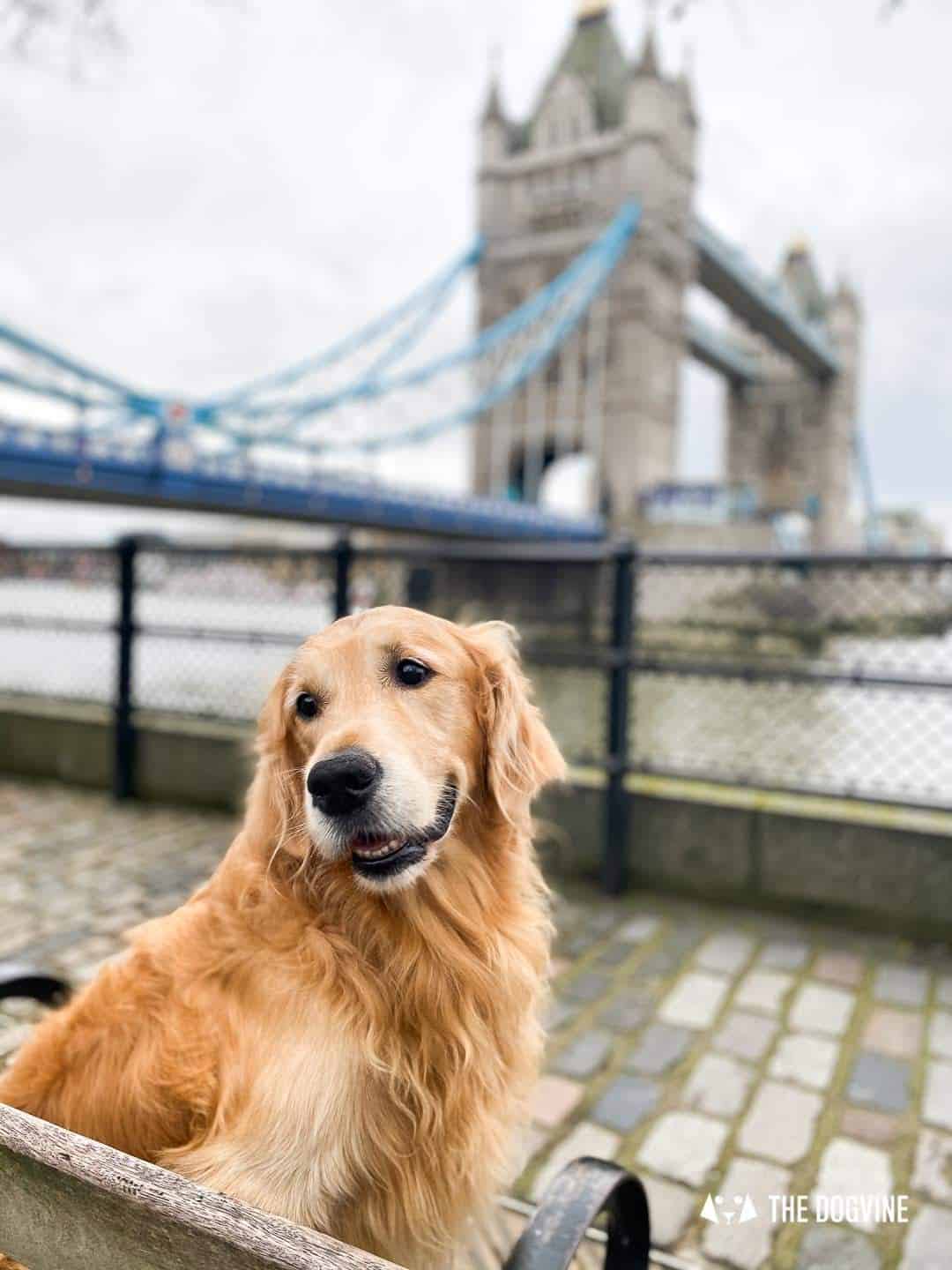 Claude (aka @the_life_of_claude), is an 8-year-old Golden Retriever and a brain tumour survivor – he bravely had his second round of Radiotherapy only recently. 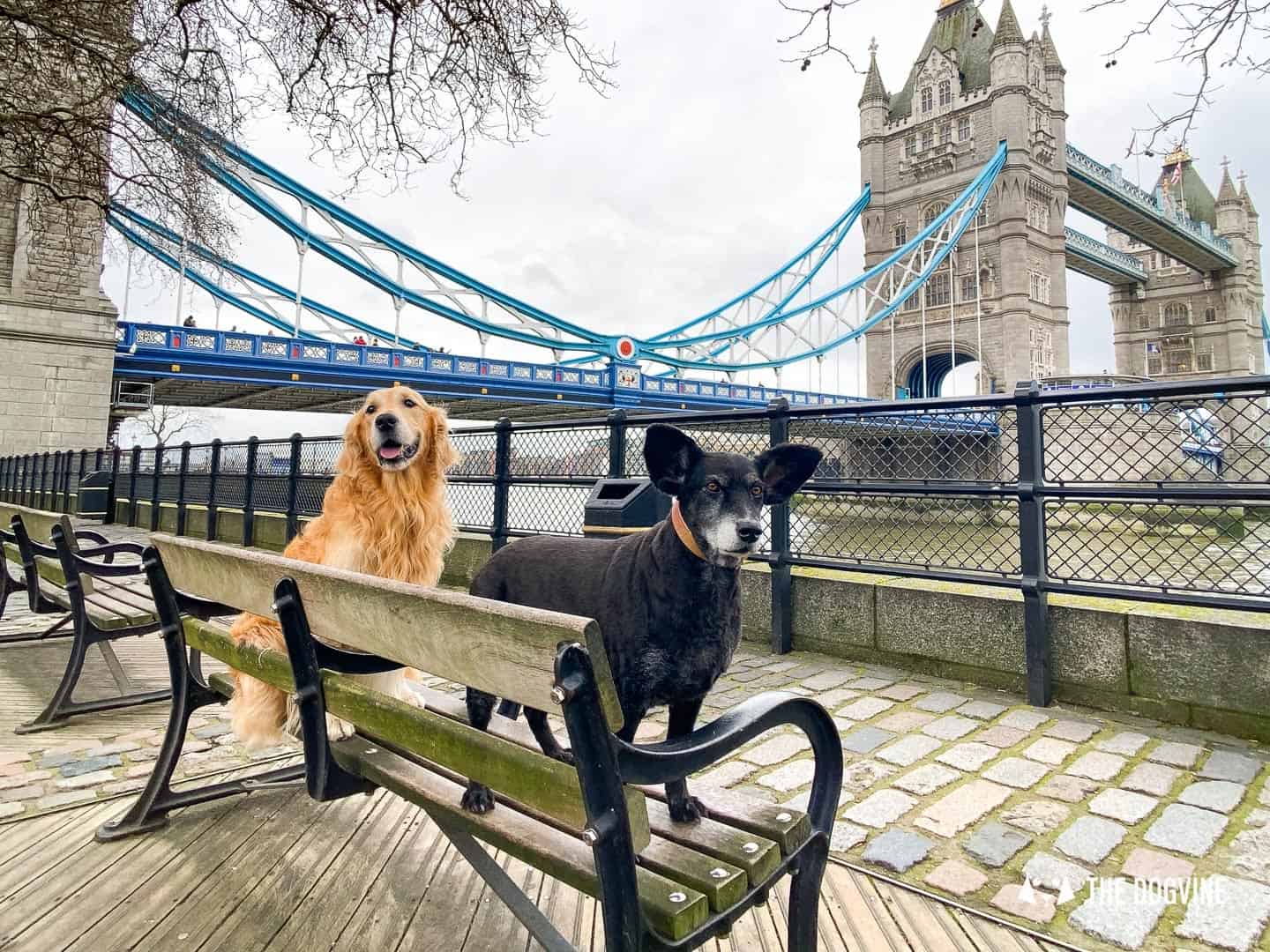 So we decided to be tourists in our own city and do some sightseeing with Belinha and Claude, with the first stop being dog-friendly Tower Bridge – here’s how we got on in case you want to plan a visit with your pup too…

Our Visit to Dog-friendly Tower Bridge 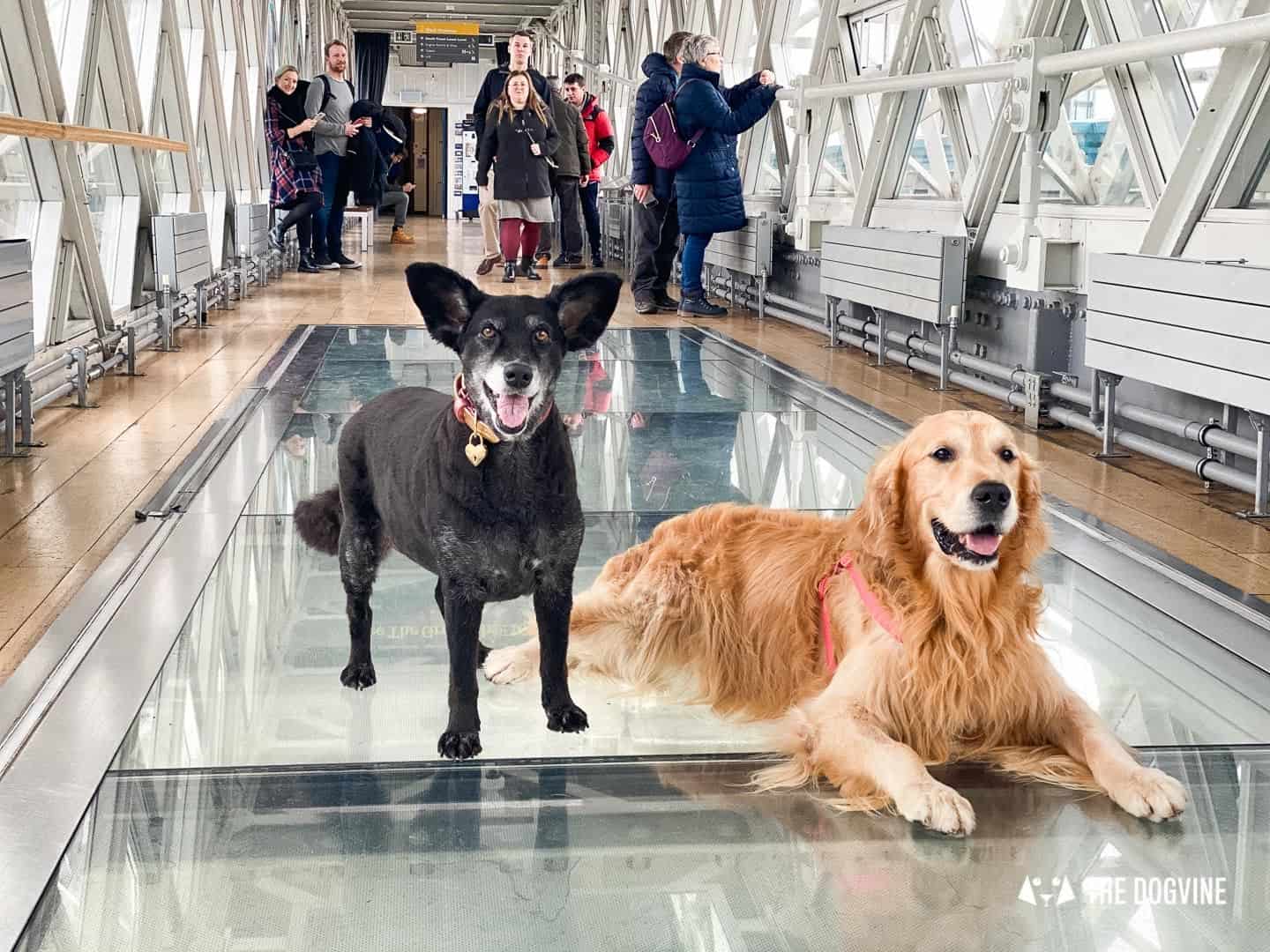 We visited during the week so that it wouldn’t be as busy as on the weekend, and it was just right. We encountered quite a few tourists who all seemed quite enamoured with Belinha and Claude, especially to see them on the glass walkway of Tower Bridge. Still, it didn’t feel overcrowded at all. 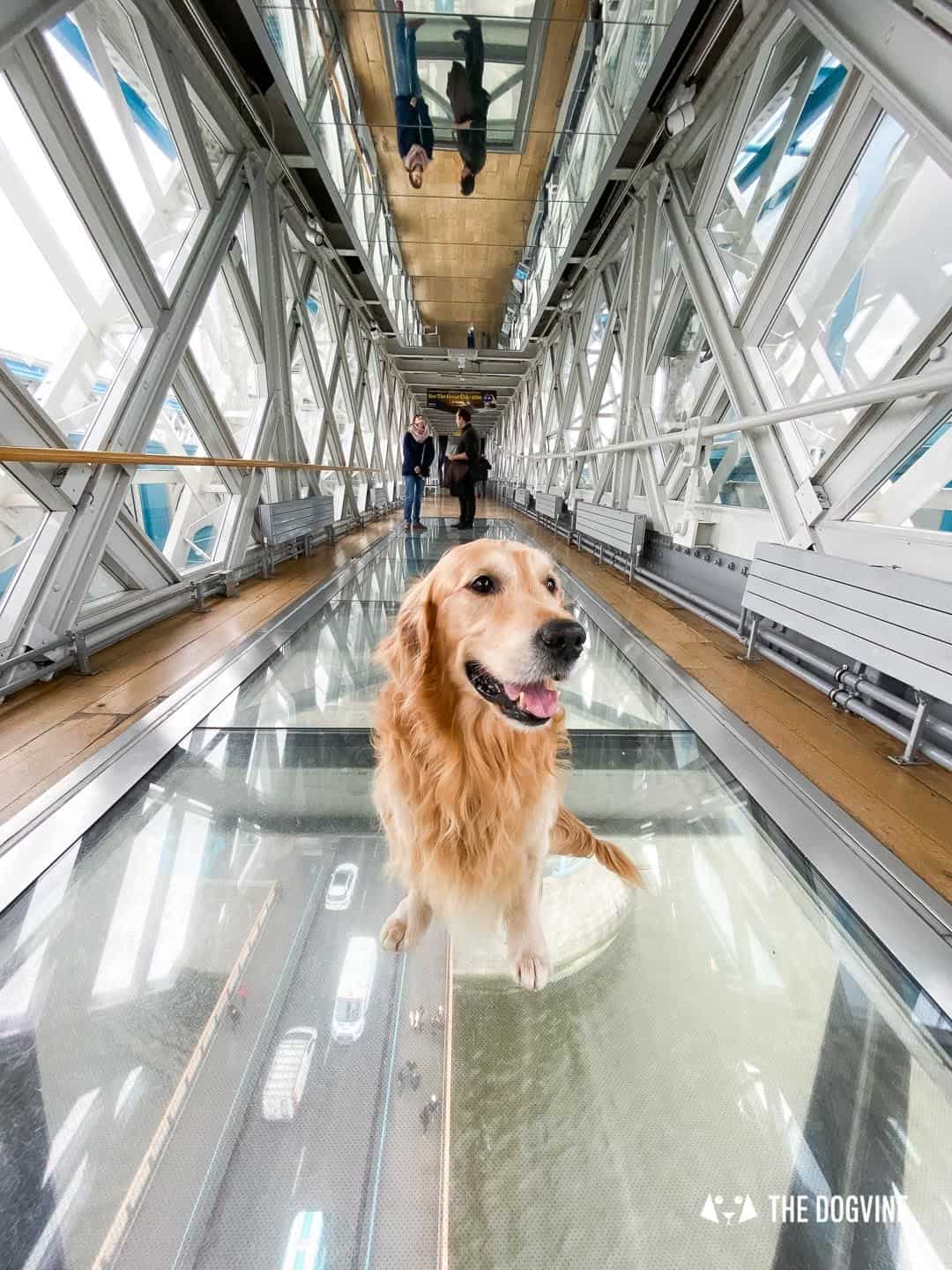 The Tower Bridge staff were all extremely welcoming to the dogs, treating them like VIPs and some even taking selfies with them. When we asked if many dogs visit Tower Bridge, they said typically not larger dogs, so they were particularly pleased to see Claude and Belinha.

Thankfully, I didn’t think about the height of Tower Bridge and that we would be walking over until after we had done it. If I had, I might have been far more apprehensive about walking over the glass floor walkways 42 metres above the Thames! 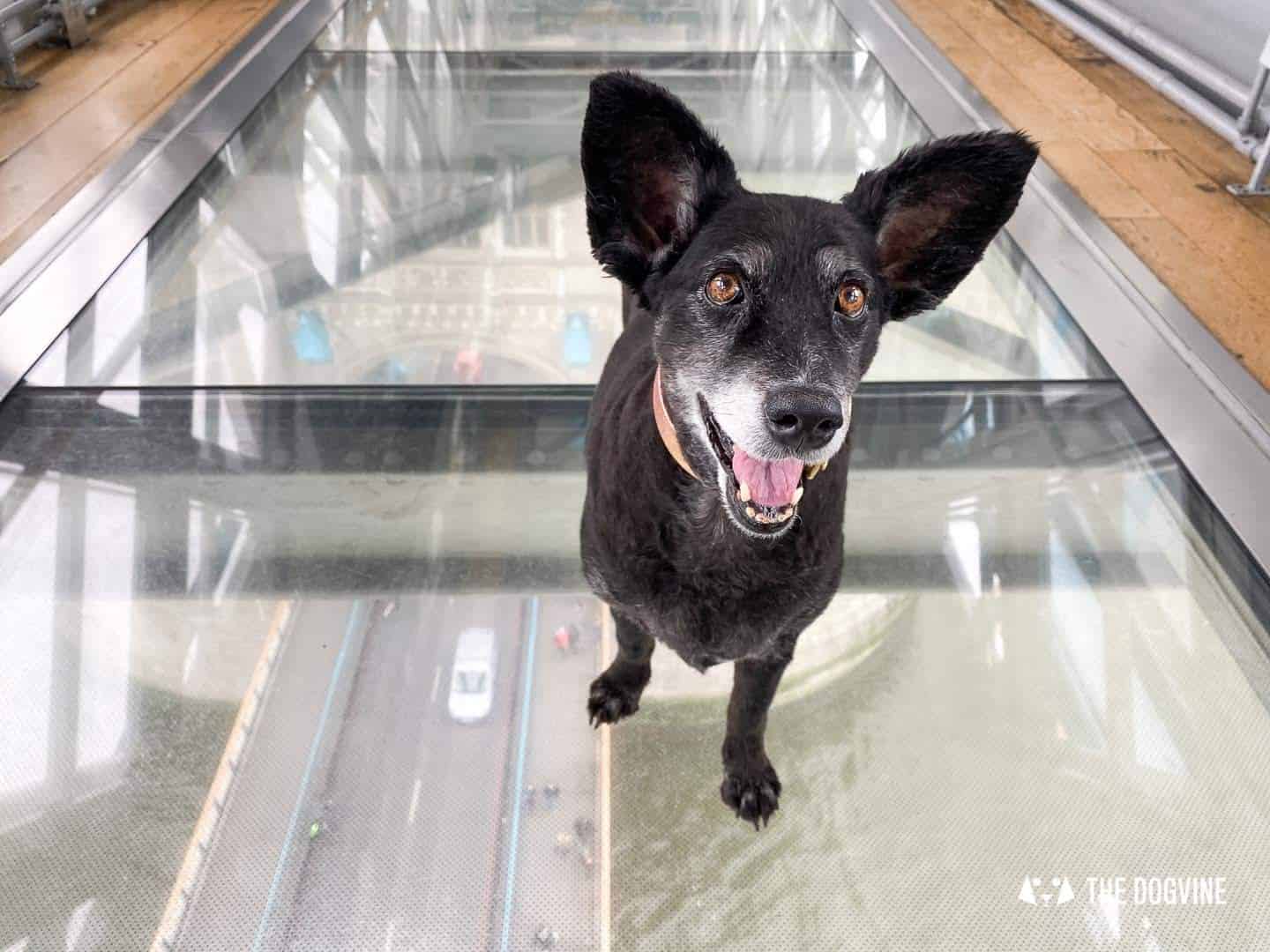 I also wasn’t sure how Belinha would like the glass floors as she can be a bit funny about walking on odd surfaces; however, neither Belinha nor Claude were phased at all, happily posing for photos and becoming part of the ‘unofficial Tower Bridge attraction’. 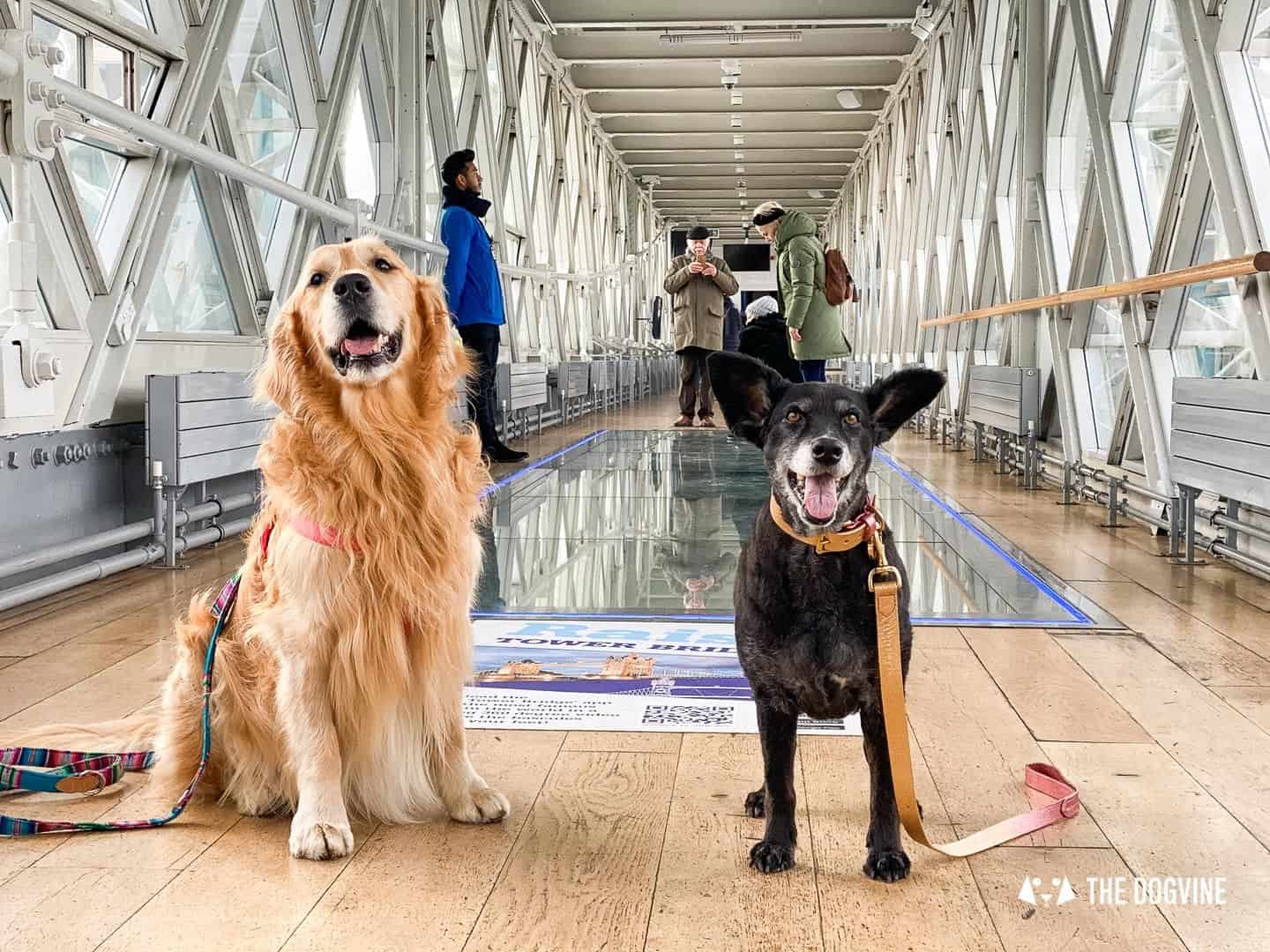 Above one of the glass-floor walkways, there’s a mirror, which makes for some fun photos and Belinha was even quite taken with her own reflection in it. 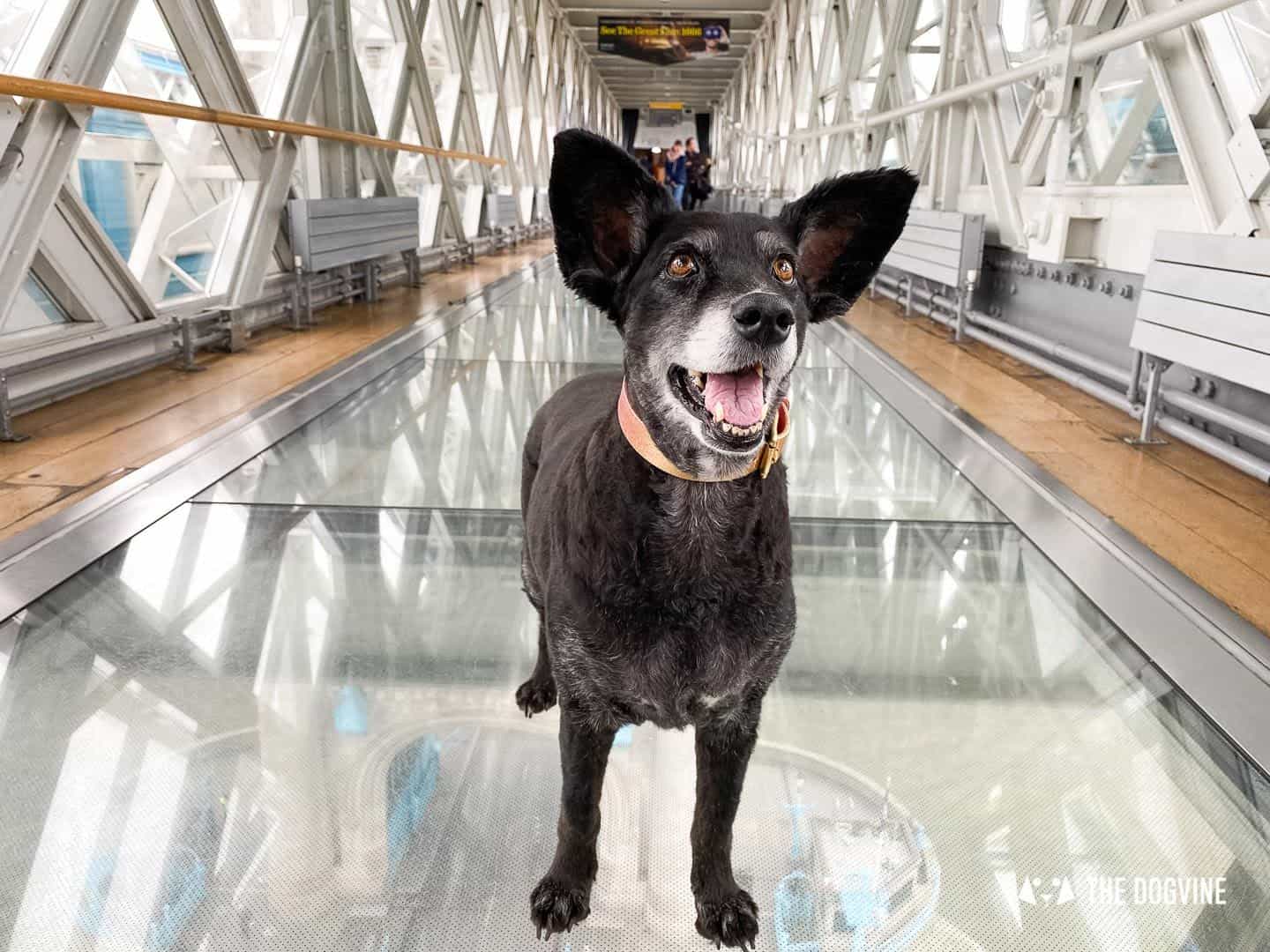 It was only afterwards as we walked back across the bridge and I saw the walkways from underneath, that I realised just how high it is! 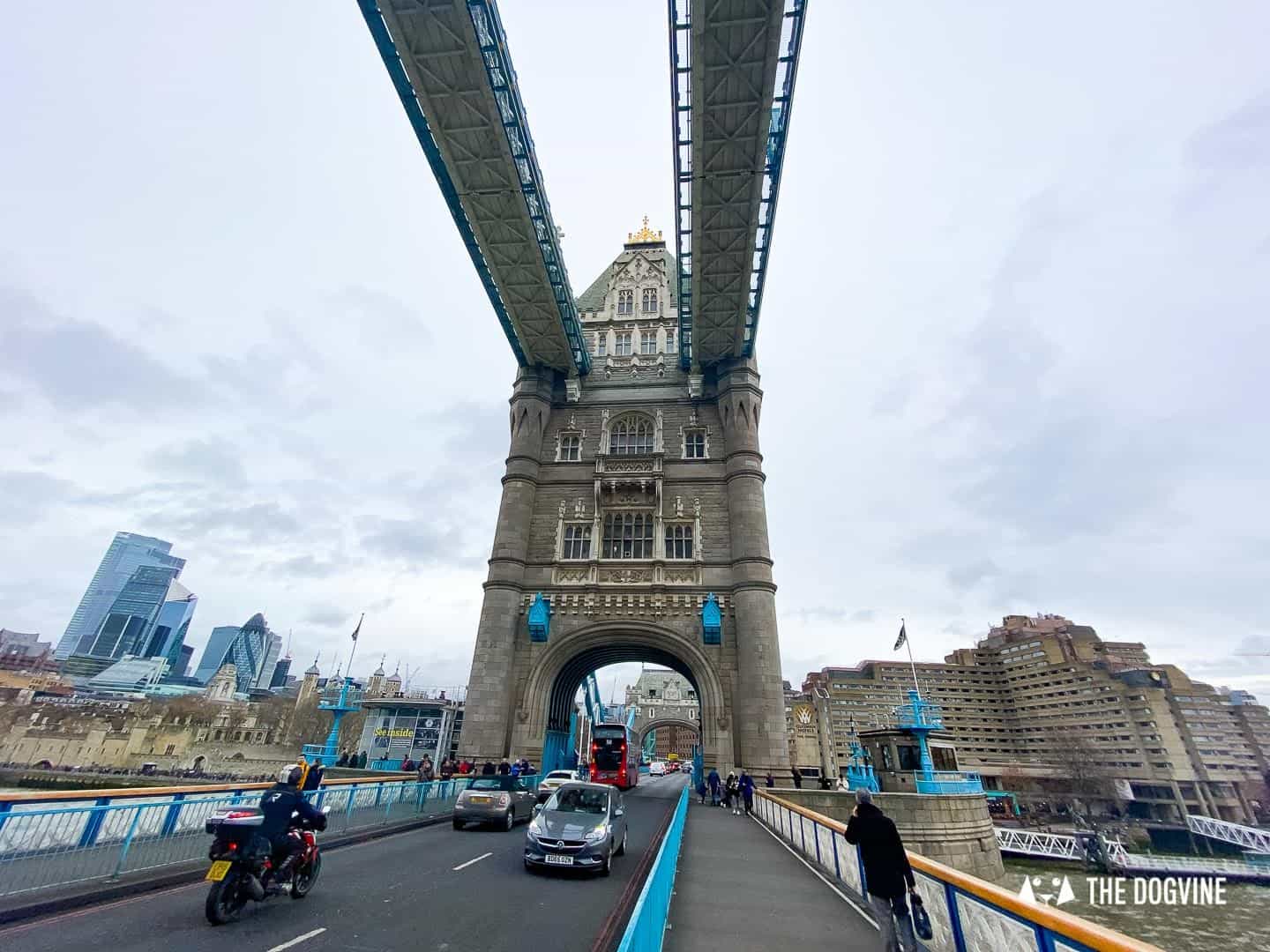 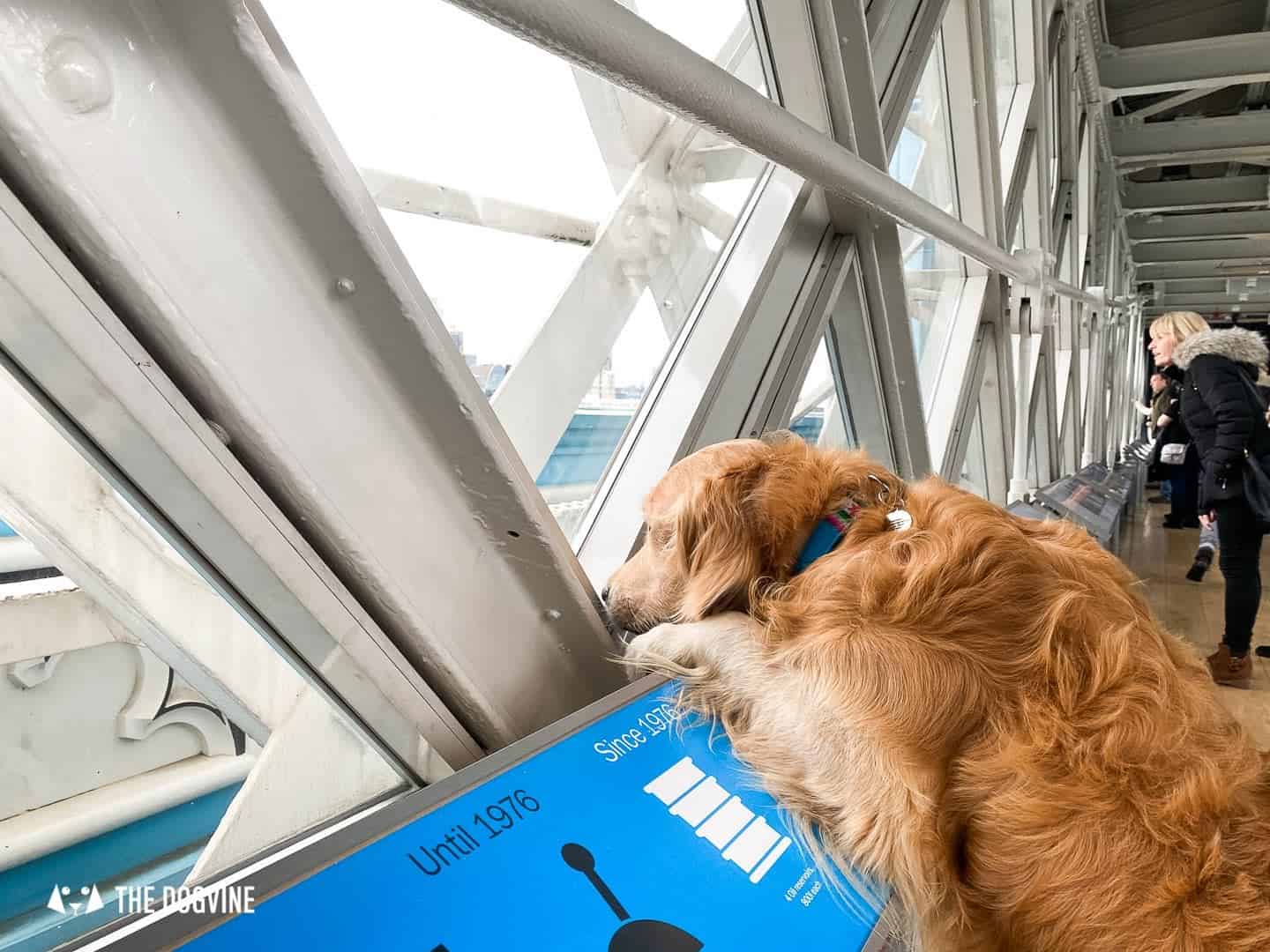 Naturally, the first thing that strikes you when visiting Tower Bridge is the views and of course the somewhat giddy euphoria from being up so high. However, don’t forget to take a moment to appreciate the history behind this iconic London Landmark. As you walk through the bridge, you can take in some of the impressive facts and figures behind the bridge. 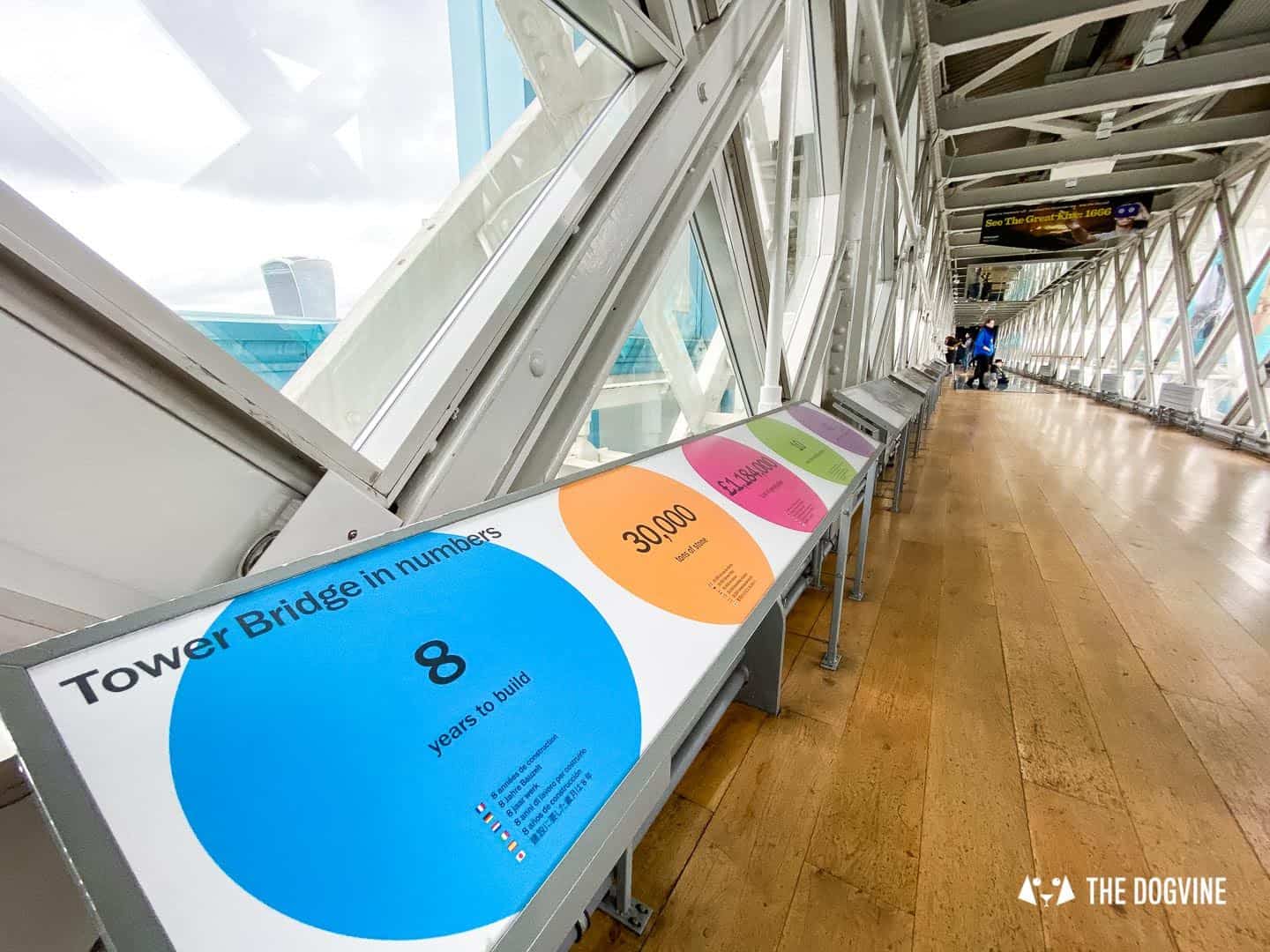 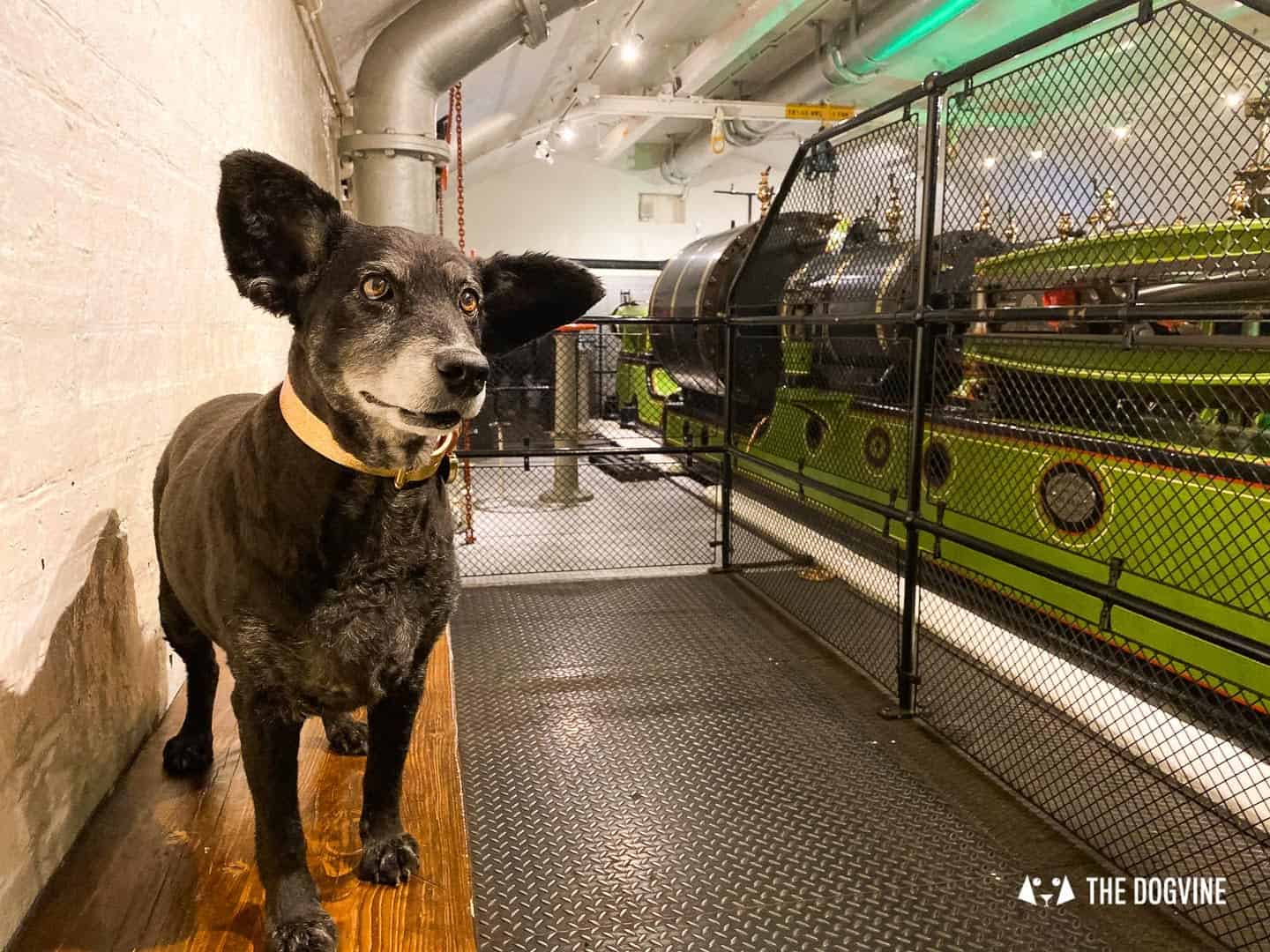 After visiting Tower Bridge itself, you can head down to the Engine Rooms to see the magnificent coal-driven engines that once powered the bridge before it switched to electrical power in 1976.

Where to refuel after visiting Dog-friendly Tower Bridge?

When you finish the exhibition in the Tower Bridge Engine Rooms, you exit the exhibition on the other side of the bridge from where you started. By this point you and your pup will likely need a dog-friendly pitstop so here are some tips on where to go… 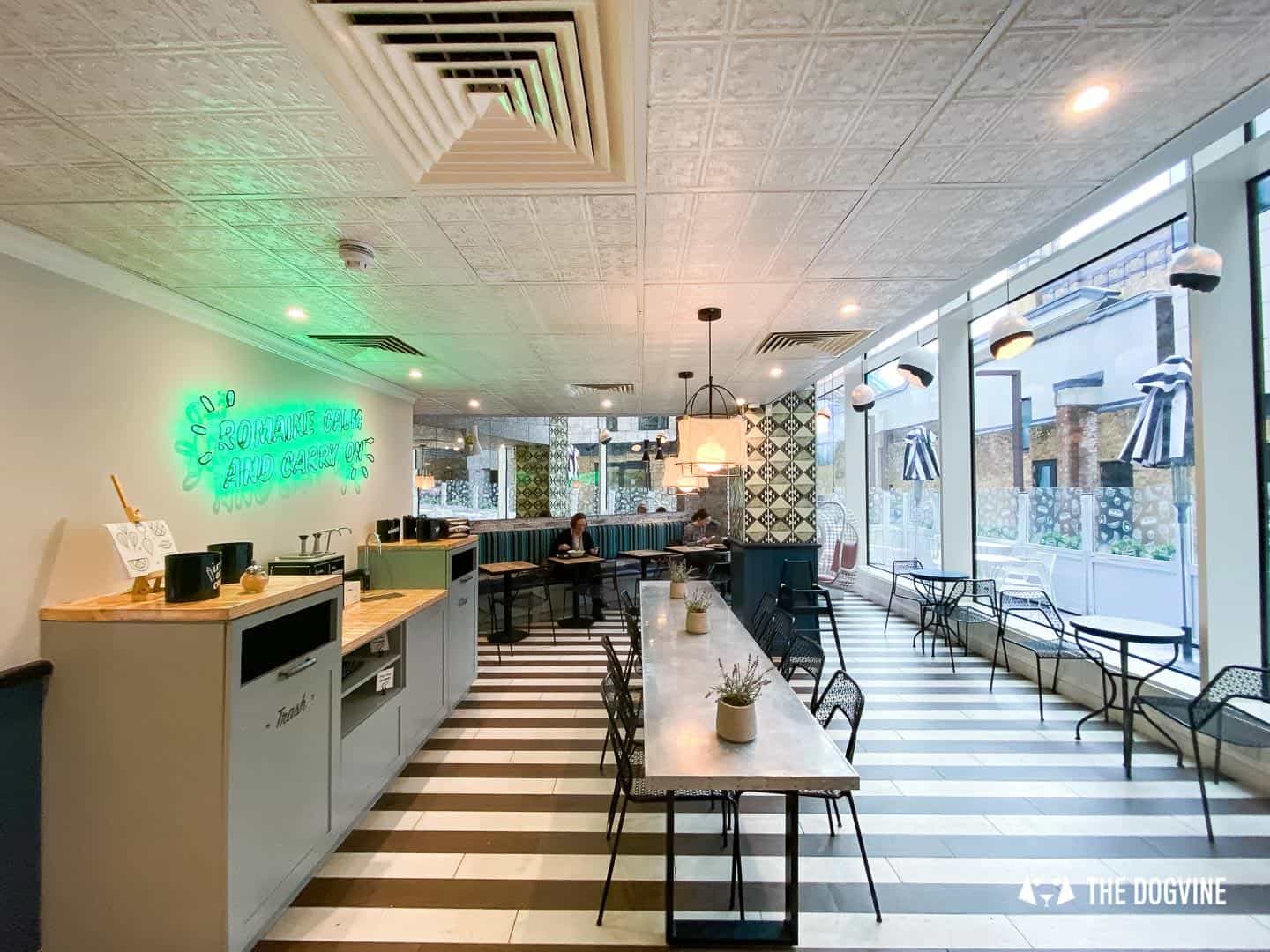 Literally, a stone’s throw from where you finish up is plant-based pup-friendly restaurant By Chloe. Not only is everything on the menu Vegan, but they also have a snack menu for doggos too.

If you want to head back over to the other side of the bridge then, Coppa at Tower Bridge welcomes dogs in their lounge area but unfortunately not the main restaurant area. Be aware that this area is quite small so you may not get a table, but if you do, it’s a cosy sofa spot to relax, and we enjoyed it. 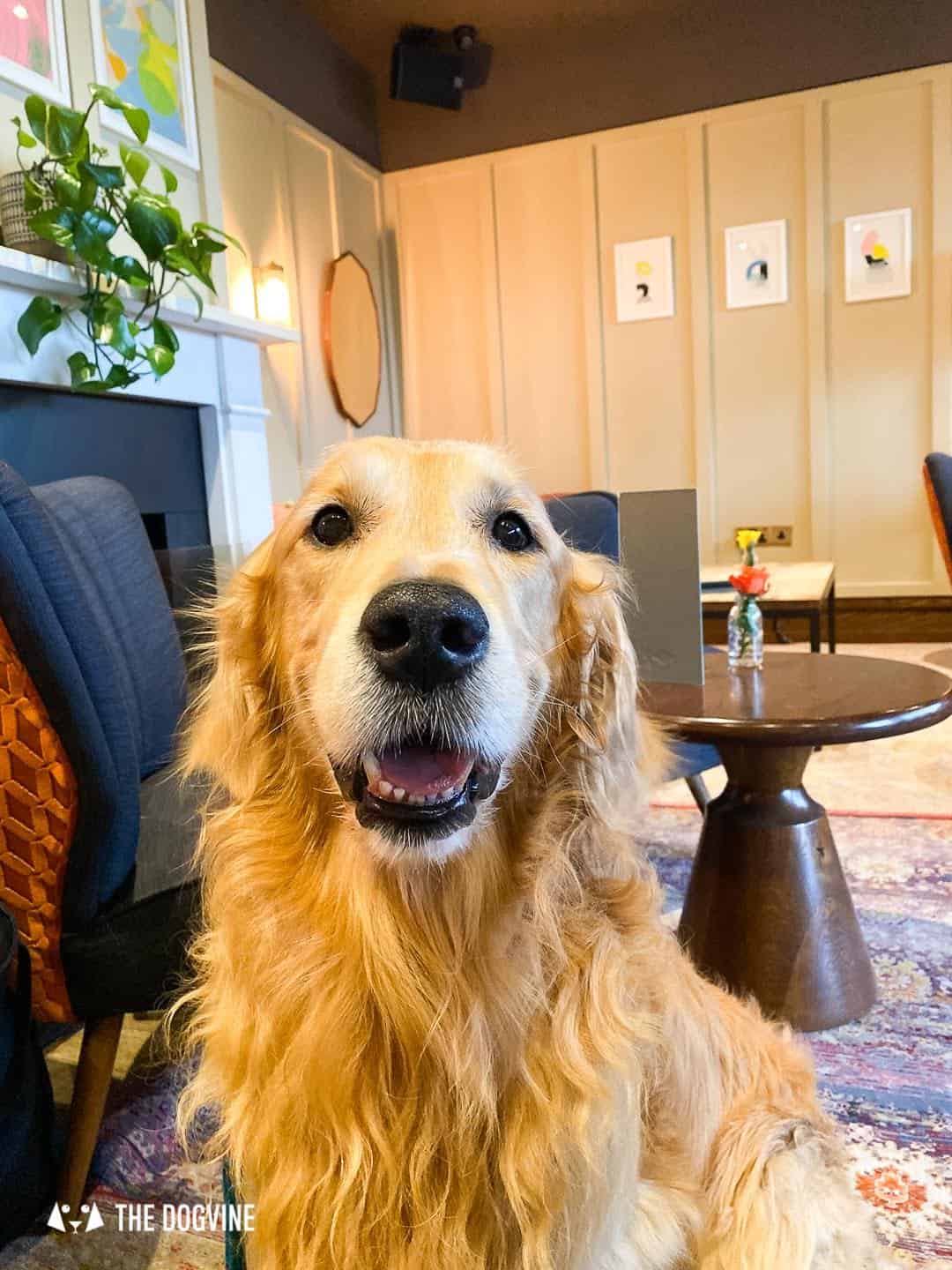 Visiting Tower Bridge With Your Dog – What You Need To Know 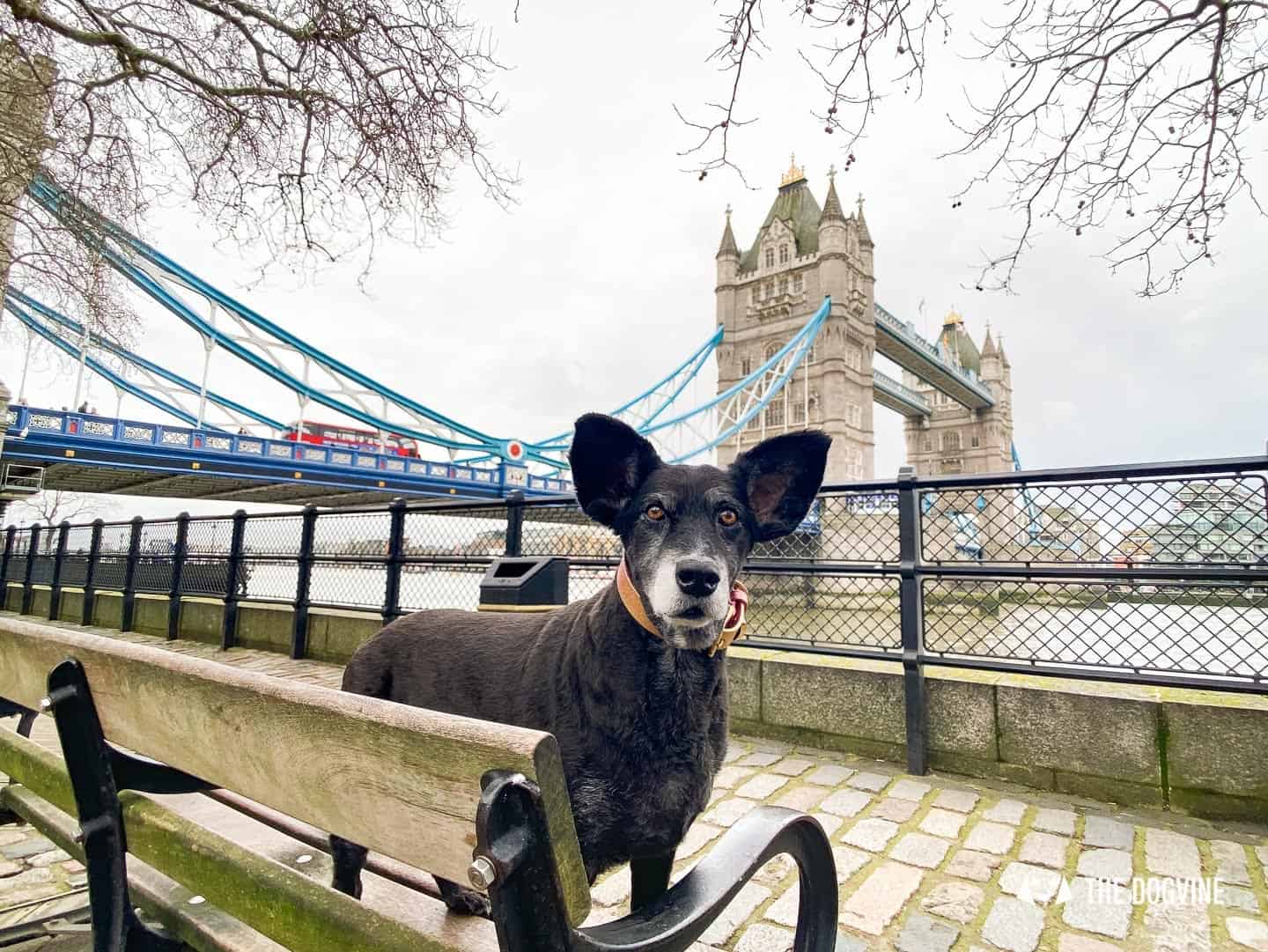 Tower Bridge’s Dog-friendly policy: Dogs large and small are allowed at Tower Bridge, providing they are well-behaved, on a lead and supervised at all times. Understandably as Tower Bridge is a tourist attraction and can get very busy at times, the number of dogs allowed in may be limited during busy periods.

When: Tower Bridge is open from 09:30 with the last admission at 17:00 daily. However, if visiting with your dog then we would definitely recommend going during the week to avoid crowds (unless it’s half-term or school holidays). Be aware that due to the nature of the glass structure, on sunny days it could get quite warm inside if you’re taking your dog. 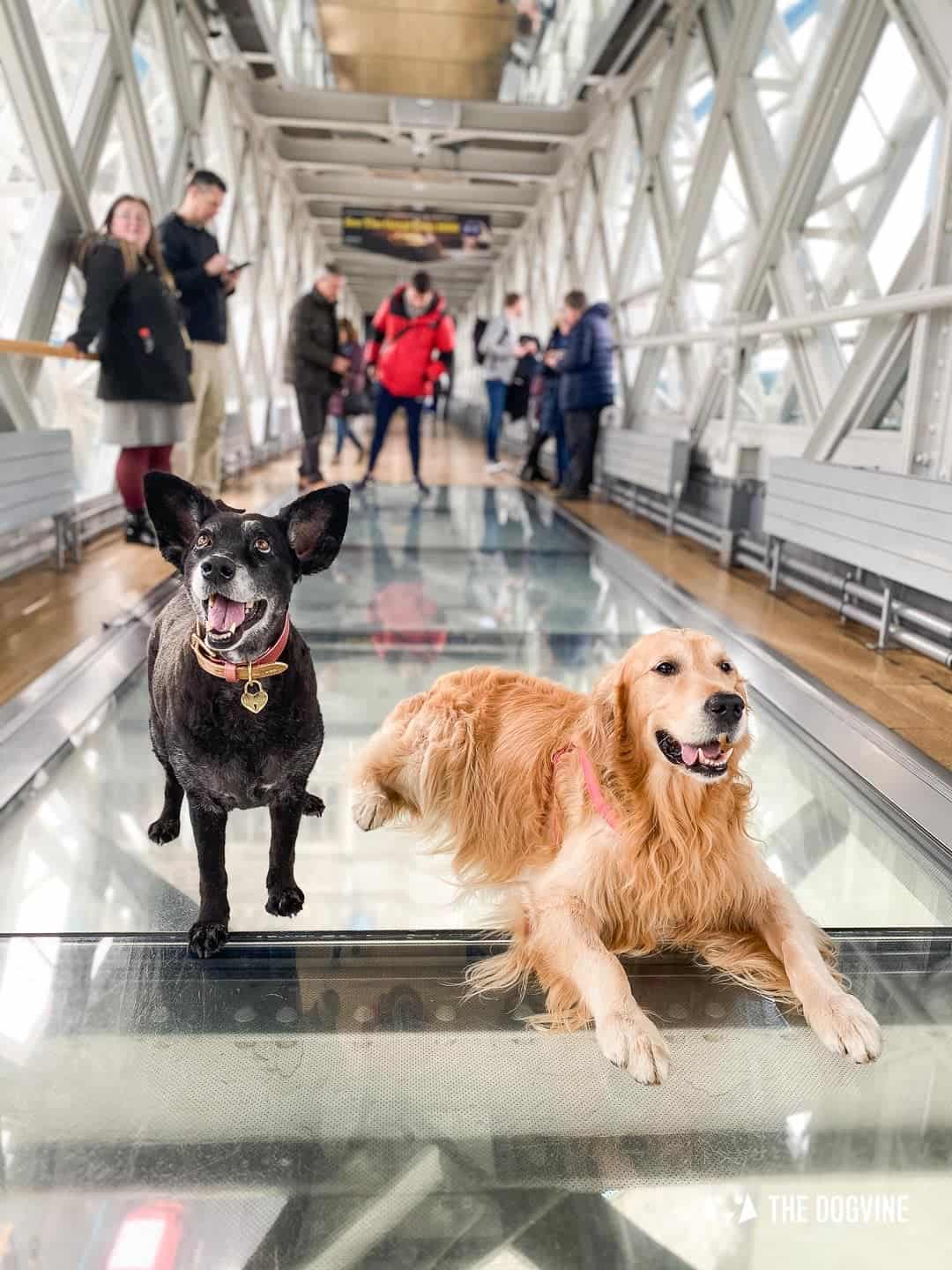 Tickets: The adult ticket price is £9.80 and dogs go free.

How long do you need to visit Tower Bridge? We spent about an hour and a half visiting Tower Bridge and the Engine Rooms. This included stopping to take photos, but we didn’t spend time taking in the films or digital displays, so allow extra time if you plan to do that.

Getting there: The closest tube (to the Tower Bridge ticket entrance) is Tower Hill which is a few minutes walk away. Alternatively, and in our opinion, a much more comfortable way to travel with your dog, is the Thames Clipper to Tower Pier. There is also a comprehensive travel section on the Tower Bridge website. 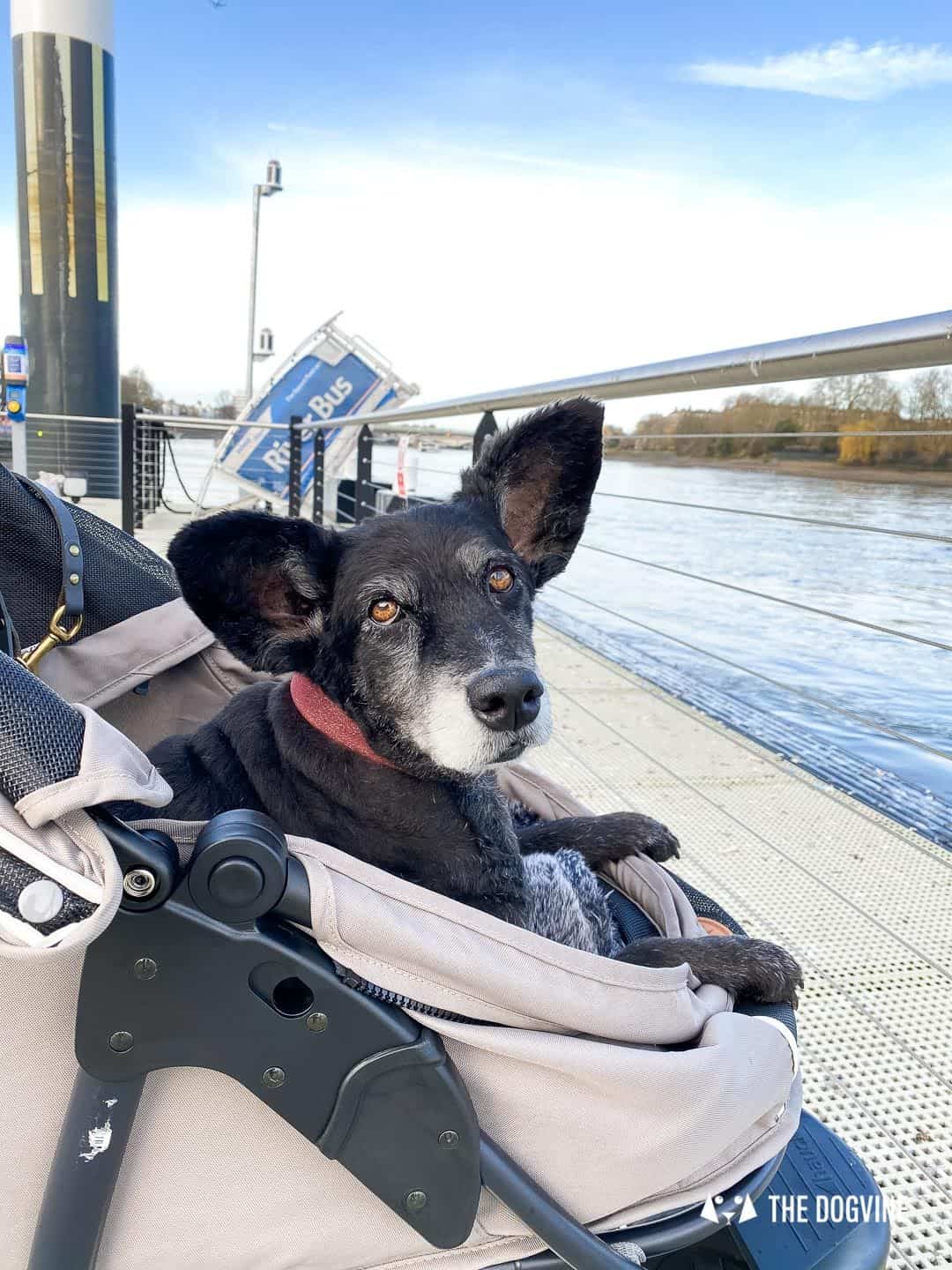 Accessibility: I had brought Belinha’s dog buggy along for her sightseeing day out and am pleased to say that Tower Bridge itself is very accessible with lifts throughout. Again the Tower Bridge staff were really helpful, holding the lifts for us and making sure we got around easily with the dogs. 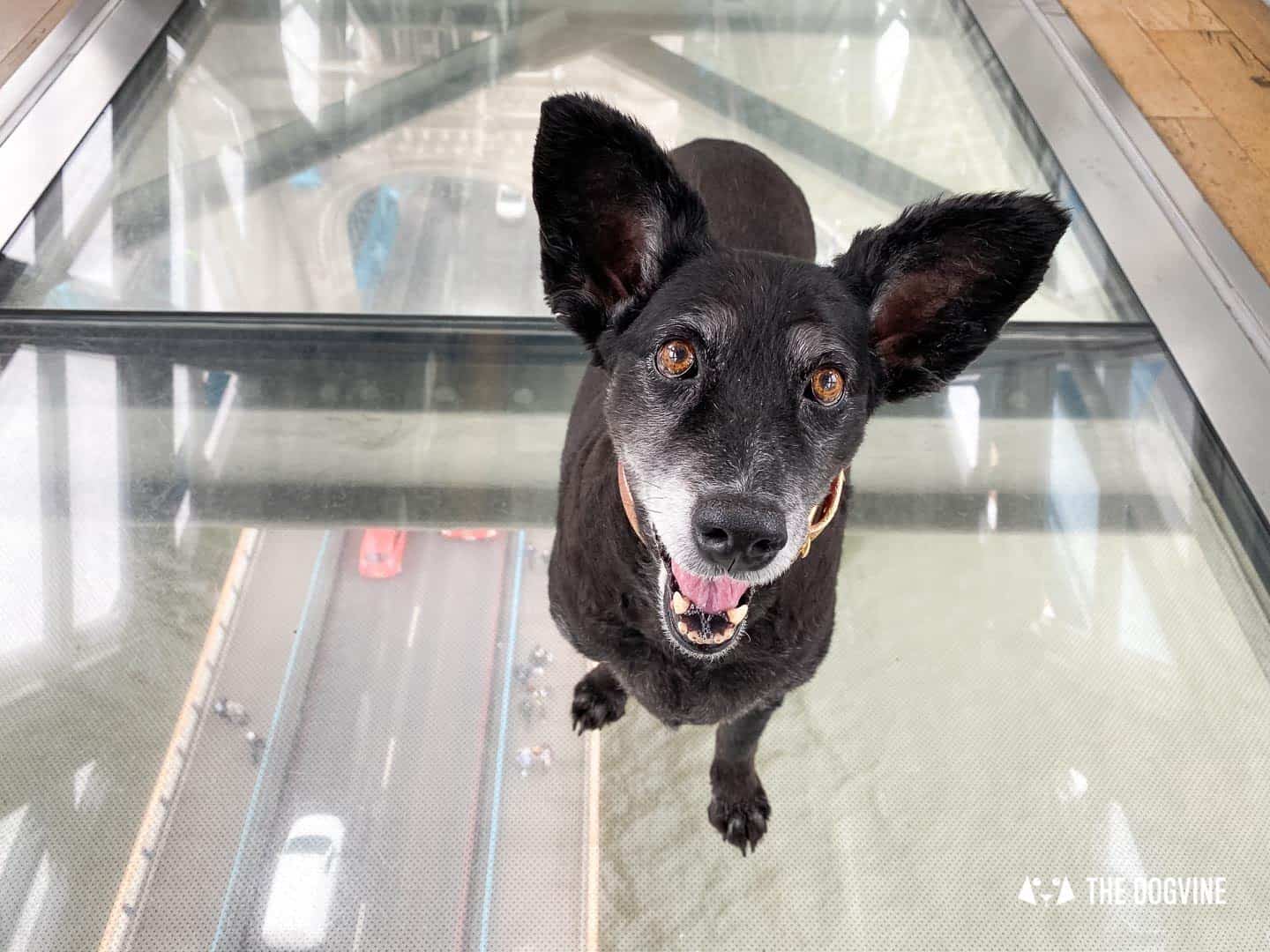 Before you go, read our Dog-friendly London Guides for more inspiration on things to do with your dog…

Guide to the Best Dog-friendly Things to Do in London 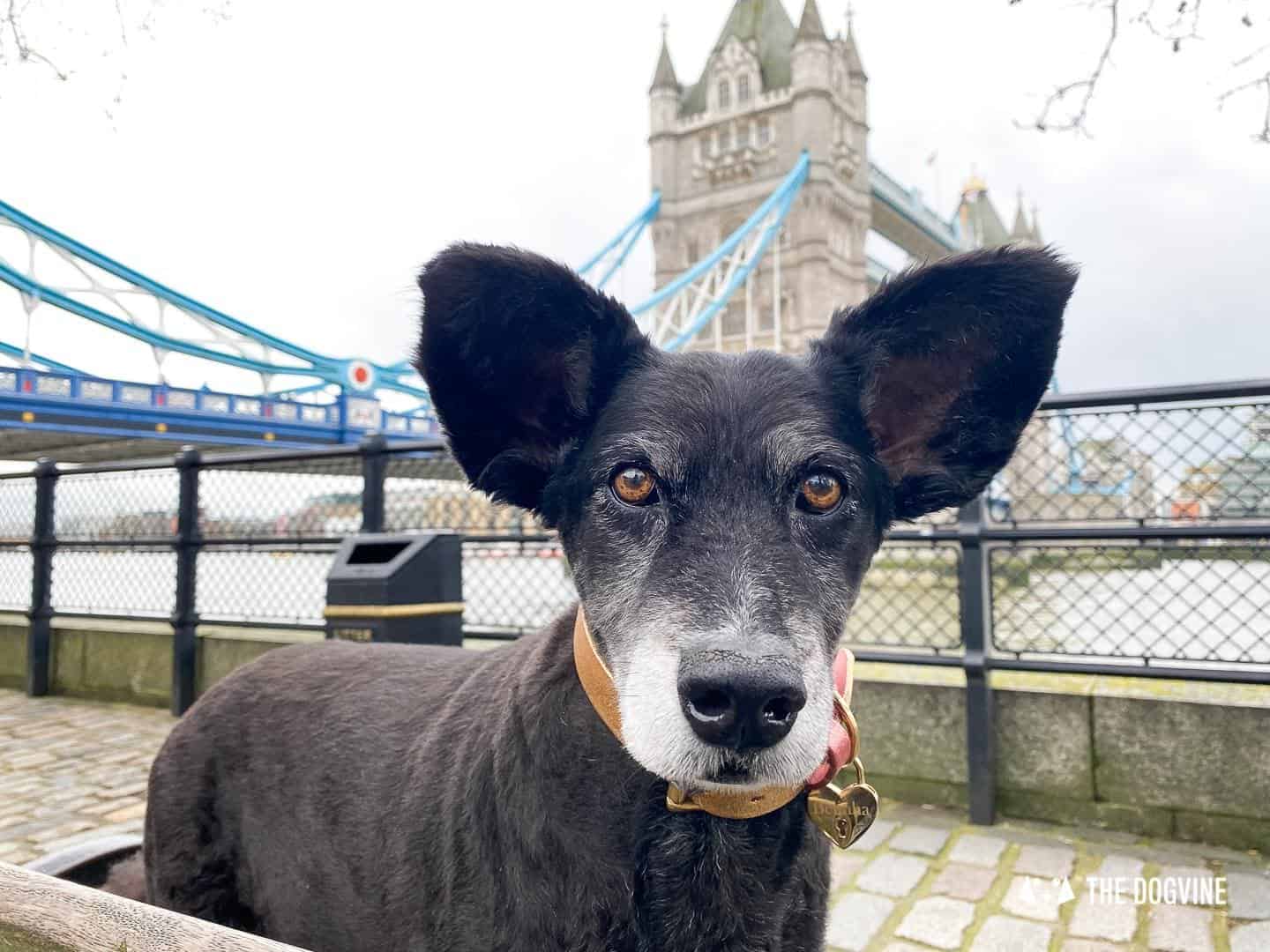 END_OF_DOCUMENT_TOKEN_TO_BE_REPLACED

Virtual Dog Events Up Next