If you fancy a pup pit-stop somewhat out of the ordinary, dog-friendly Little Nan’s Deptford is the place to go. Little Nan’s had long been on my list to visit ever since they hosted a dog-friendly New Year’s Eve Party in 2017 but somehow I’d never quite had a reason to visit Deptford until I found myself passing through one day. Had we been traveling by train it would have been much easier to find as Little Nan’s is just a stones throw from Deptford Station. 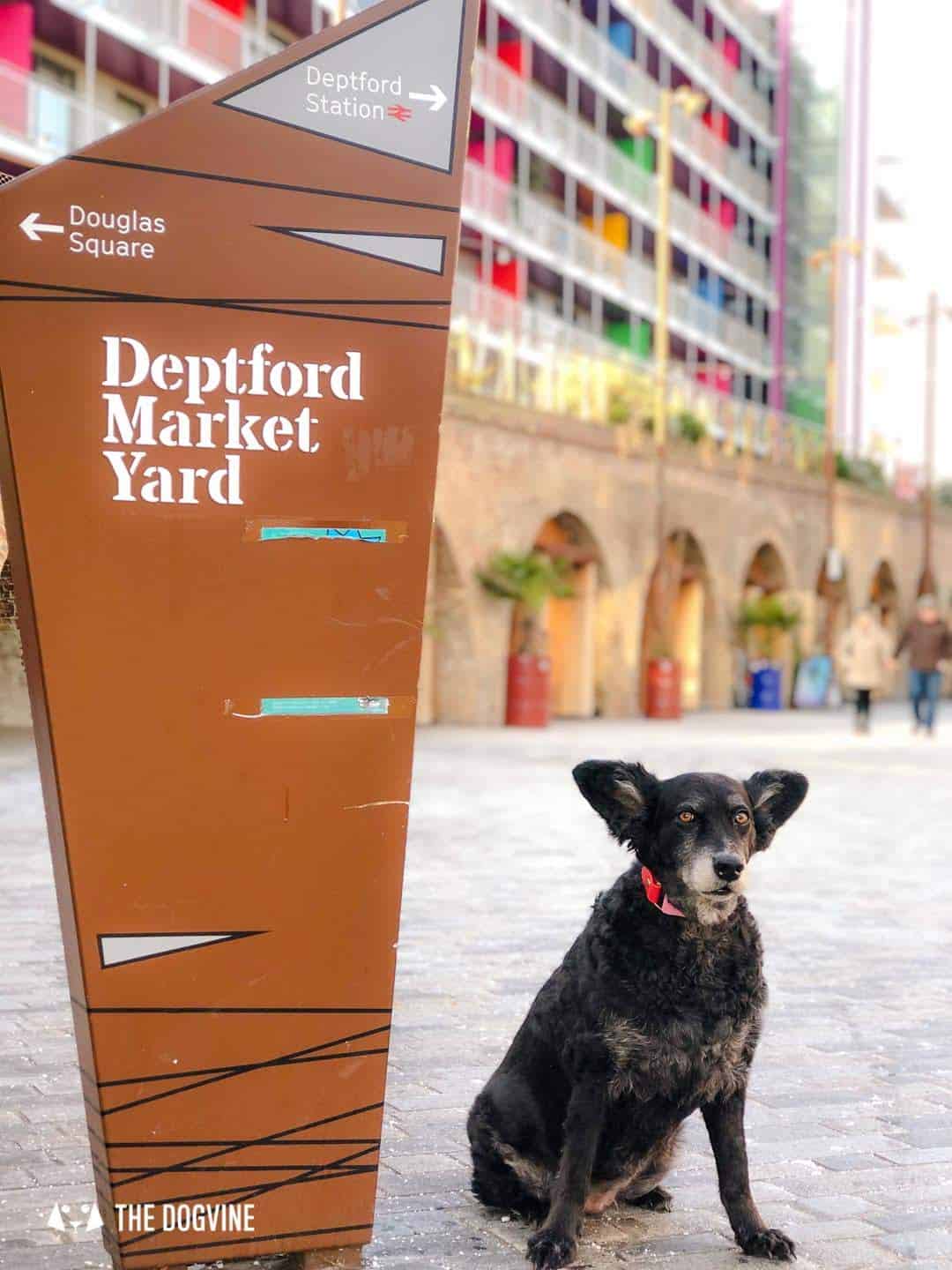 Living it Up Down Dog-friendly Little Nan’s Deptford

Dog-friendly Little Nan’s Deptford which describes itself as a ‘bar and high tea parlour’, is tucked away in the railway arches of Deptford Market Yard and an emporium of delightful 80’s kitsch and trivia awaits. As we stepped inside I didn’t know where to look, simply because there was so much to look at! 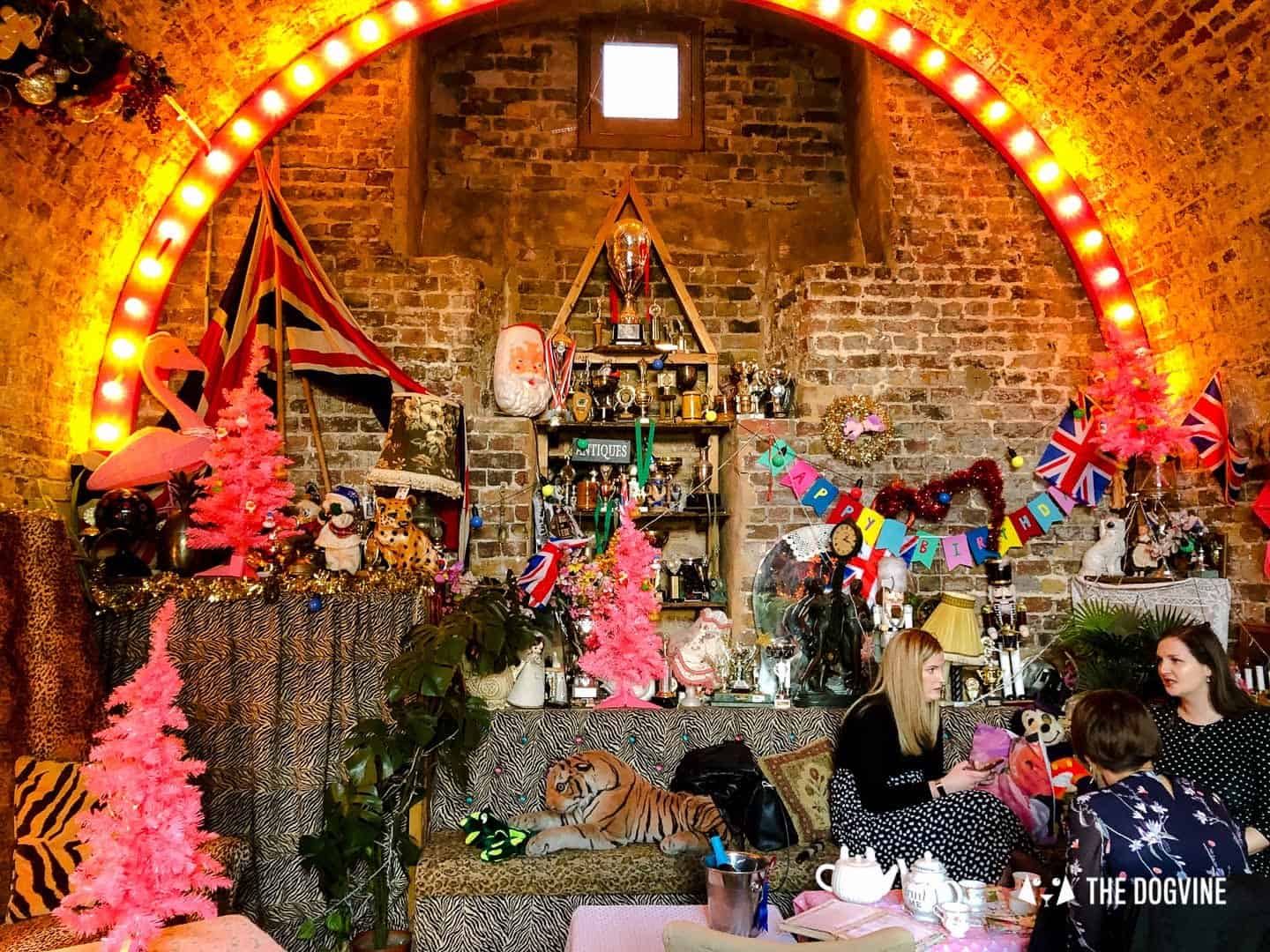 Everywhere you turn, you’re met with a trip down memory lane and a full-on nostalgic 80’s throwback… 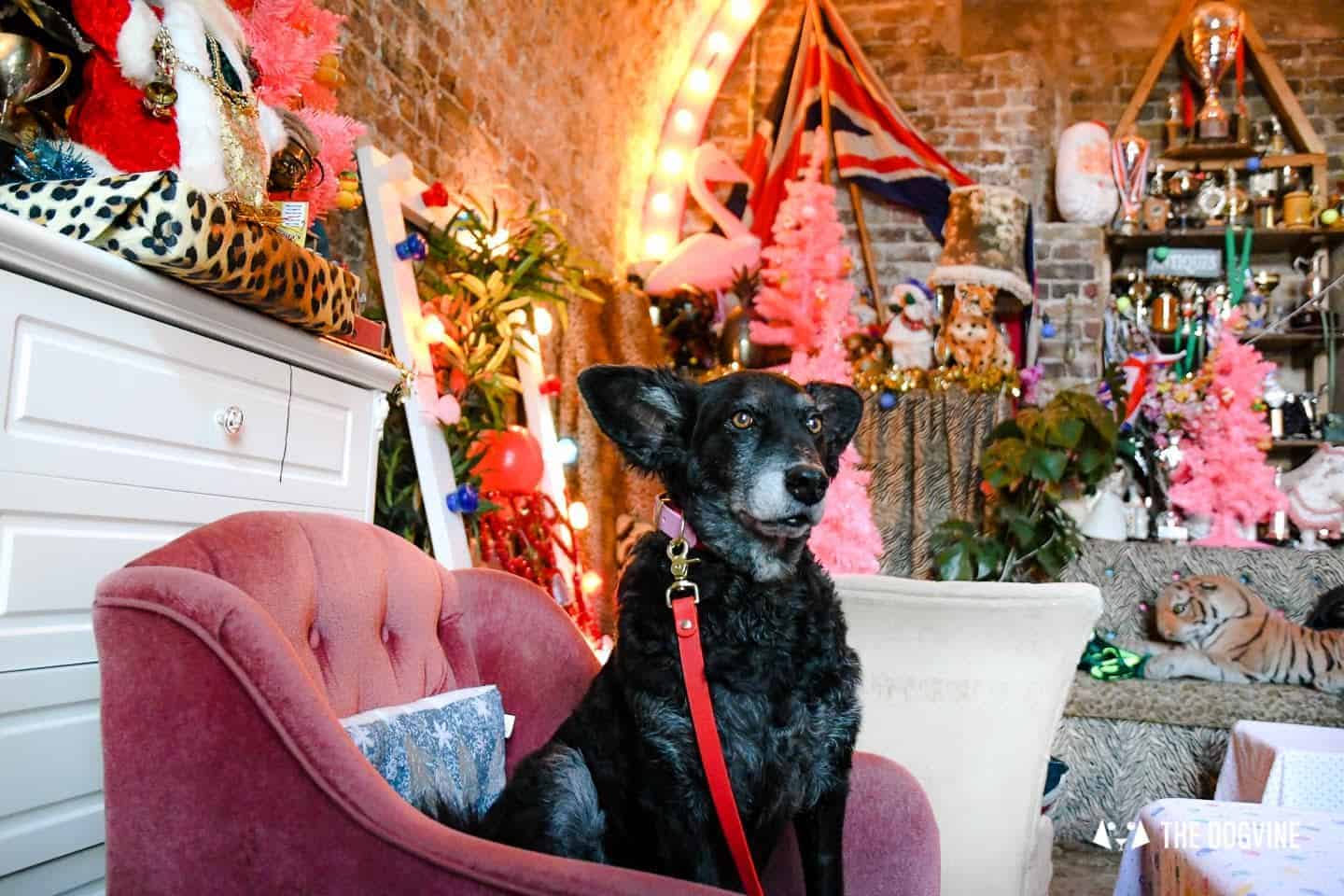 Little Nan’s is more than a nod to your nan’s living room back in the day, it’s a dedication. However, the Nan you need to have in mind is more of a Pat Butcher from Eastenders type as there’s no holding back on the Leopard print decor or celebs in photo frames as well as china ornaments and cat cushions galore.

There’s even an Eastenders Queen Vic style bronze bust but actually of Lady Pat herself, can you spot it? 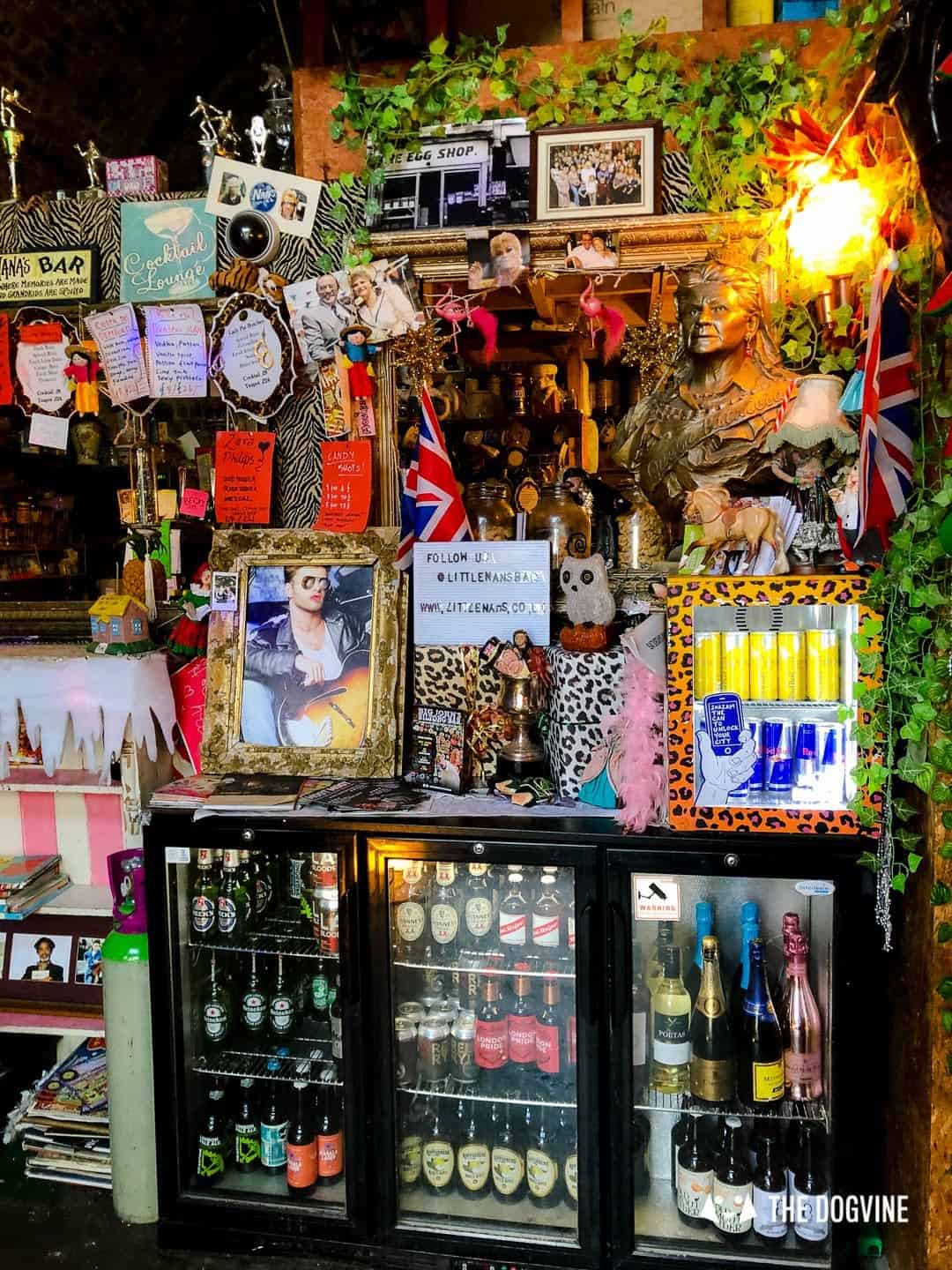 In reality, the Little Nan who inspired this vintage gem is Little Nan JoJo, nan to owner Tristan Scutt who set up the bar in honour of his late grandmother who made it to the grand old age of 104. 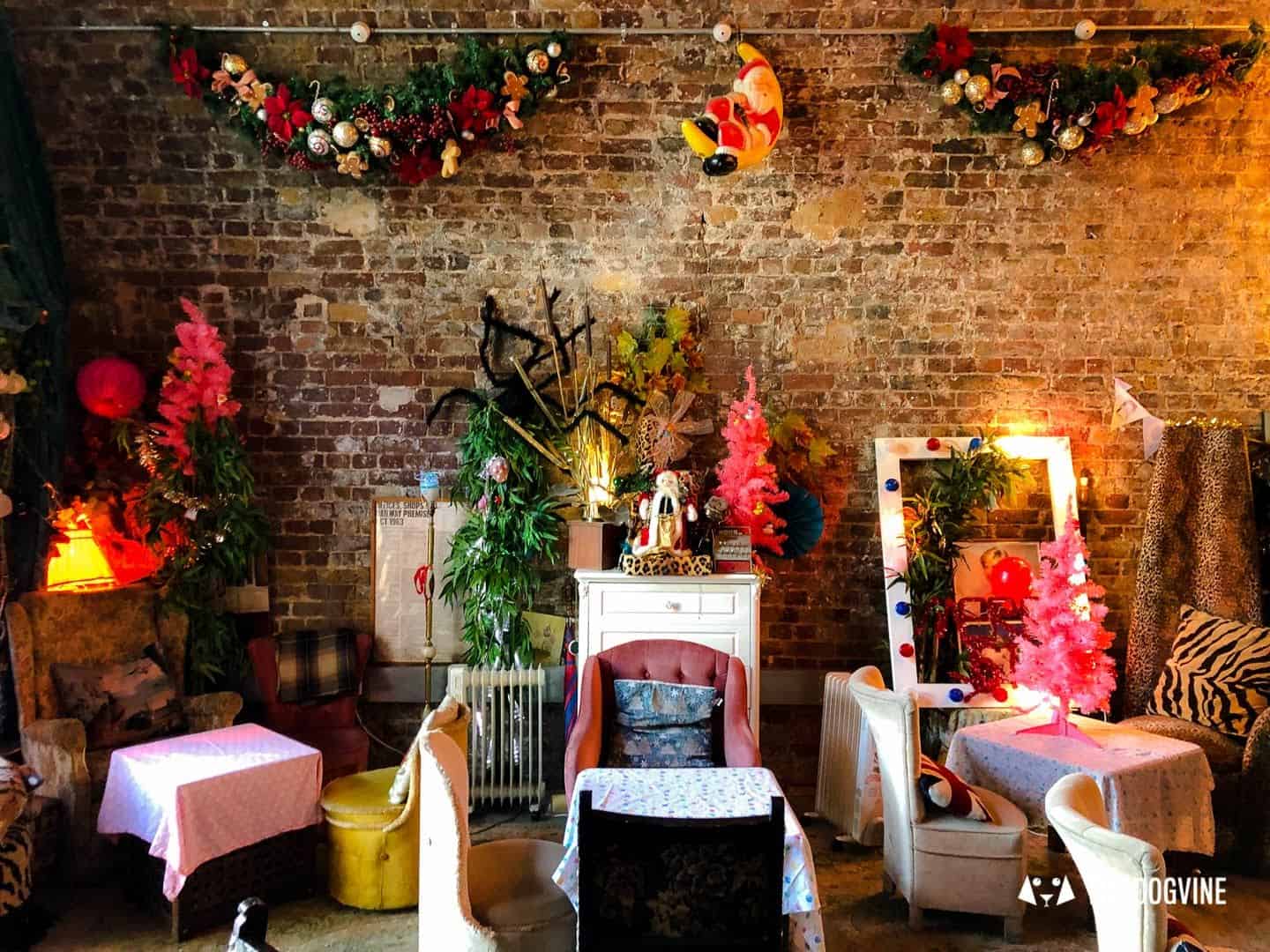 As Tristan himself says “back in 2013, using all of my Nan’s furniture, ornaments & treasured heirlooms, I set up this bar in honour of my late Nan with a mission to spoil guests with a nostalgic homely kitsch environment”.

Well Tristan, we think Nan JoJo would be proud. 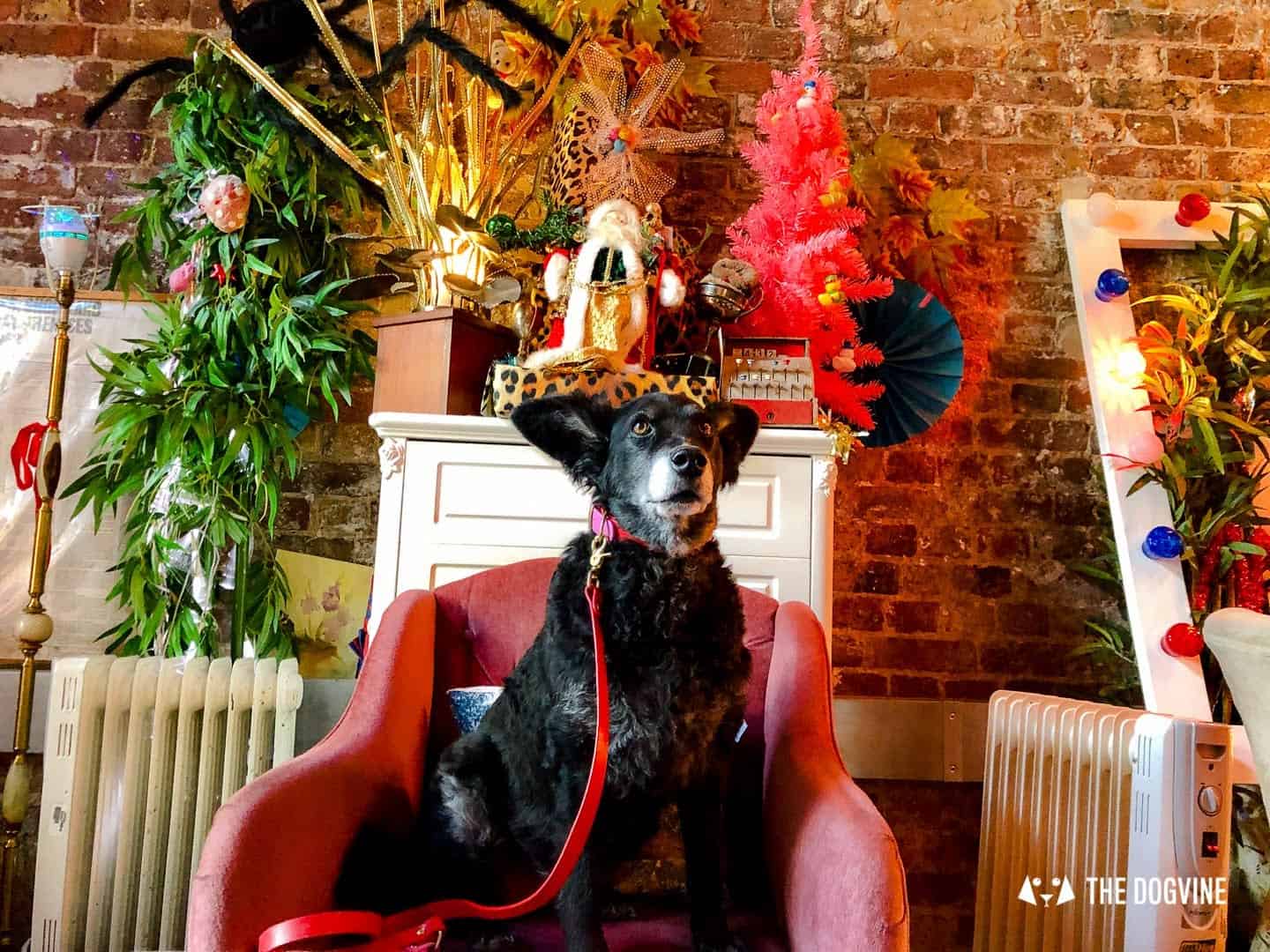 Turns out Billie is a self-confessed fellow ‘Crazy Dog Lady’ with two adorable rescue dogs herself (they are adorable, we’ve seen the photos). Billie welcomed us with open arms and to Belinha’s delight, a steady stream of sausage treats. Of course there is a doggy water bowl available to wash the sausages down with. 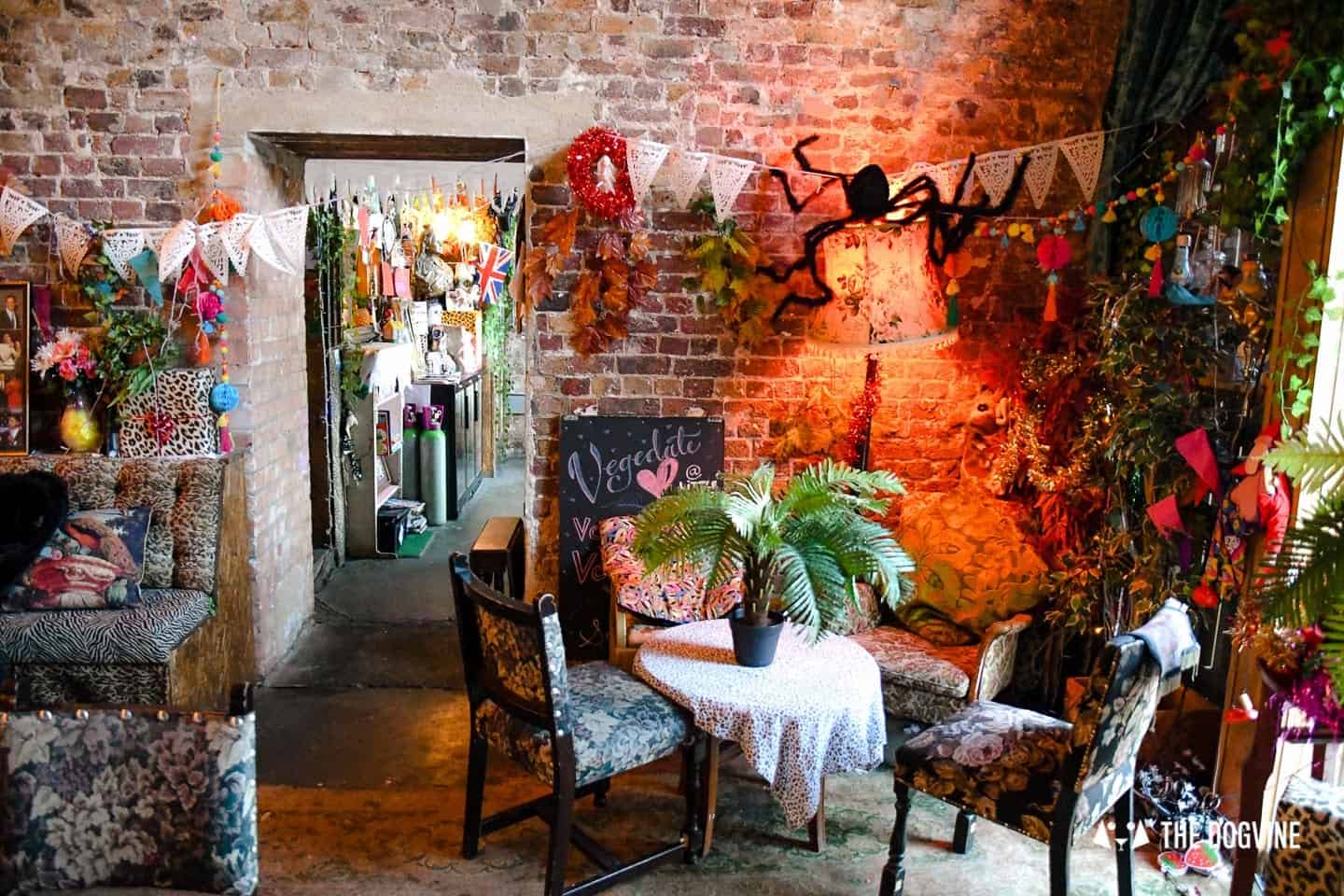 Billie filled us in on some of the hidden treasures of Little Nan’s such as the hand-written cocktail menus hidden inside 80’s memorabilia books, as well as her signature creation of the Little Nan’s Boozy Brunches and Afternoon Teas (non-boozy versions available too) served in a vintage china tea set your nan would have been proud of. No wonder Little Nan’s has won a whole host of awards with London’s Quirkiest Afternoon Tea being one of them. 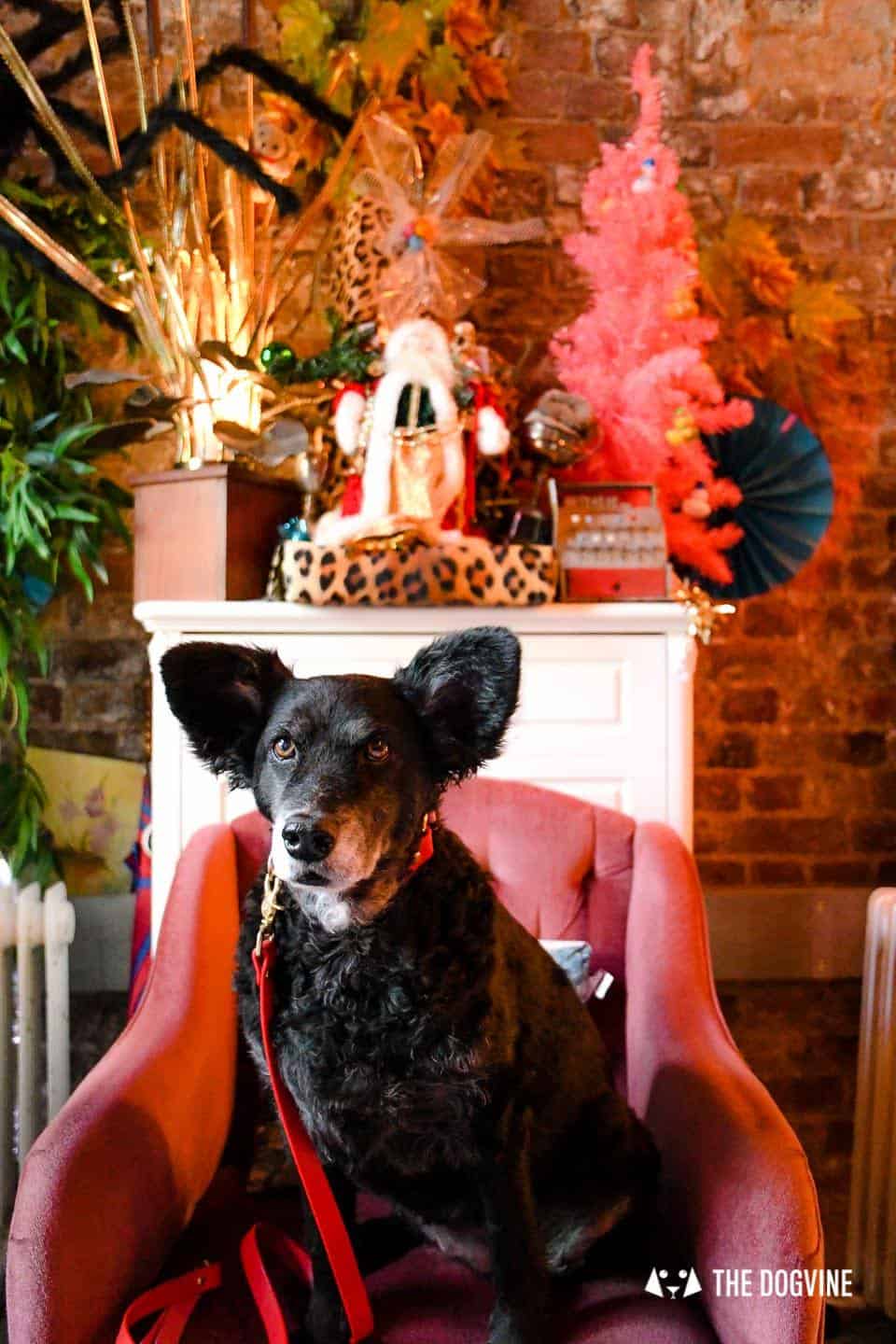 Little Nan’s has proved to be so popular it’s now expanded into a second arch at the Deptford Market Yard called ‘Grandad’s Shed’…well it had to be called that didn’t it.

Grandad’s Shed is a large room next door and just as fabulous, so perfect for larger groups, birthday celebrations and the like – there’s even free hire for SE London residents!

There’s also now a dog-friendly Little Nan’s in Fitzrovia which takes the Pat Butcher homage to a whole new level with a separate party area named in her honour…‘Flat Butcher’ and as of February 2019, Little Nan’s will be coming to Stockwell with Little Nan’s Pub & Shirley’s Ballroom at the Cavendish Arms. 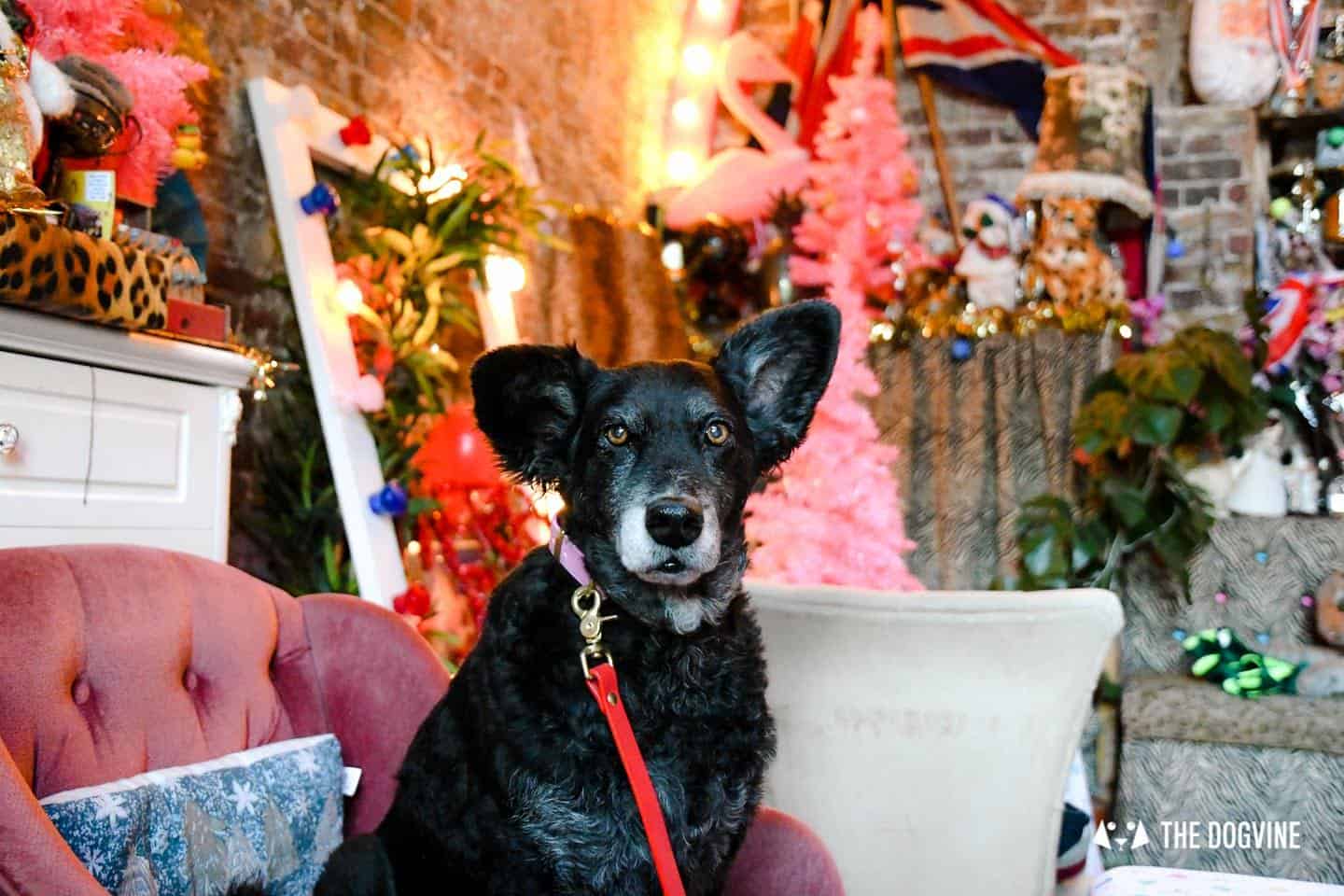 Thank you for such a fabulous dog-friendly Little Nan’s welcome…it’s a paws up from us and we’ll definitely be back. 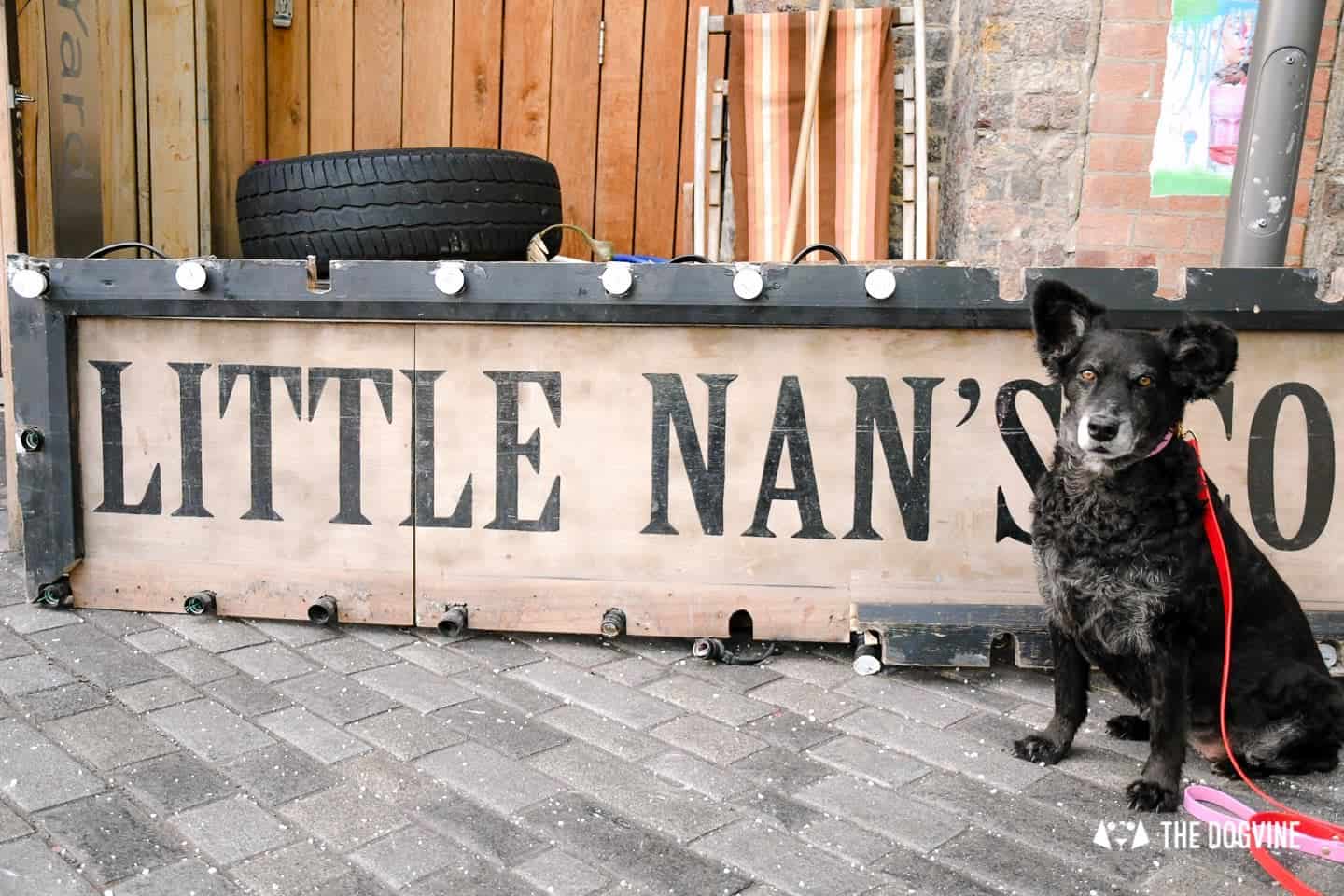