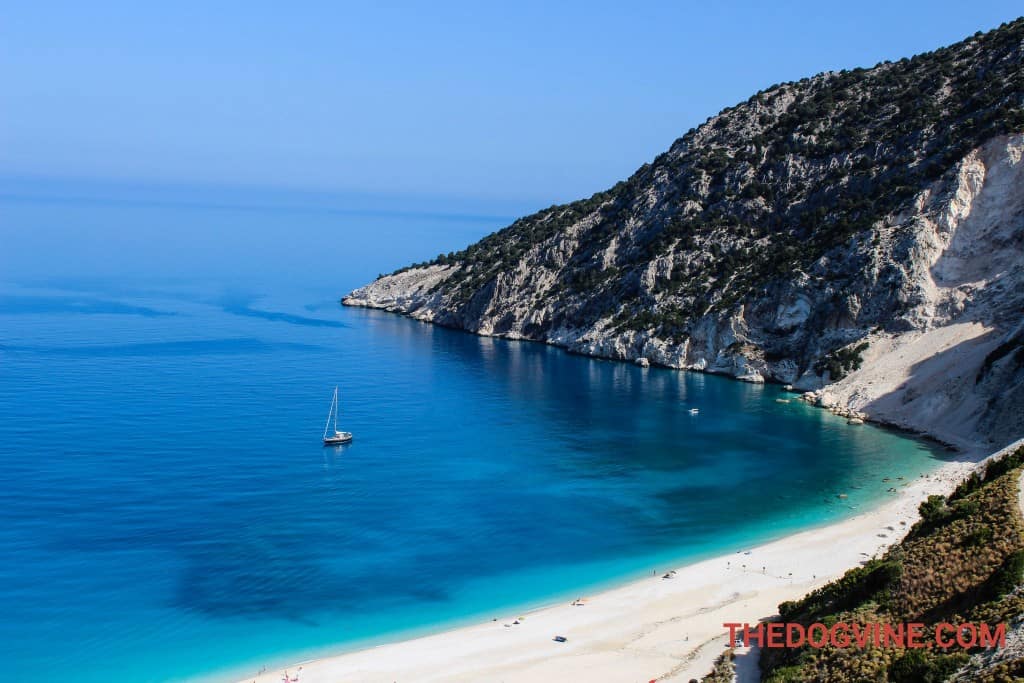 Kefalonia, a gorgeous island in the Ionian sea of Greece is well-known for its natural beauty, stunning beaches like Myrtos pictured above and starring role in the film Captain Corelli’s Mandolin.  However, whilst thousands of tourists visit Kefalonia each year, unknown to many, one woman works tirelessly to give the island’s stray dogs and cats a second chance. 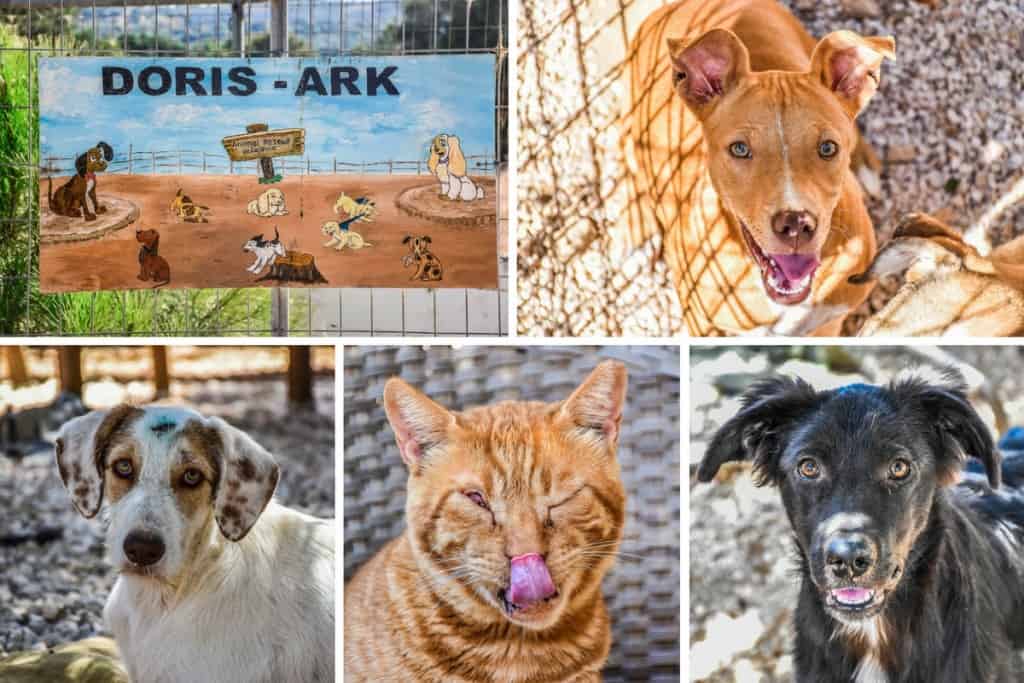 Animal Rescue Kefalonia or ‘ARK’  is home to 350 dogs and 50 cats and run by Marina Machado, a Colombian lady who lives in Kefalonia. Marina fights daily to save Kefalonia’s dogs and cats spending seven days a week caring for the animals. After a long day at ARK, Marina goes to work in her shop in Argostoli in the evenings which sells traditional Greek delicacies.

We came across ARK on a previous trip to Kefalonia when we walked past Marina’s shop and saw food outside and one stray cat who caught our eye. He had clearly already had his dinner thanks to Marina! 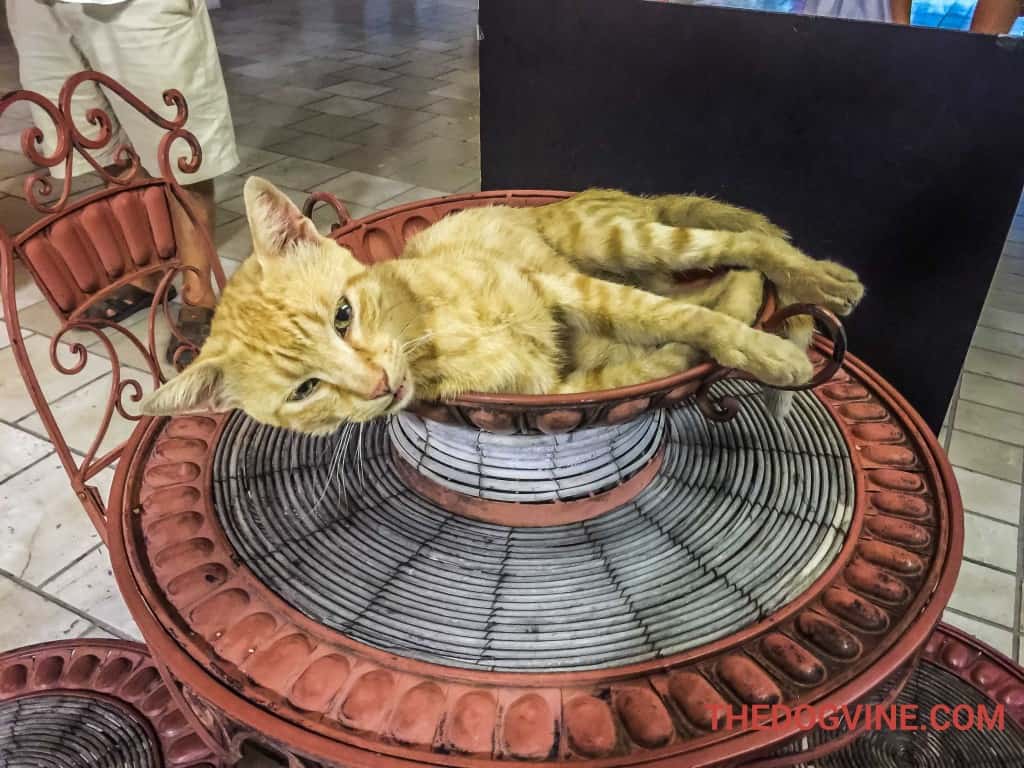 That year we visited ARK to make some food donations, sponsored two dogs and came back to the UK full of admiration for Marina. This year, together with friends of ours who were in Kefalonia, we decided to also help out for a day working at the shelter. That took our admiration and respect for ARK and this amazing woman to a whole new level.

When we arrived, Marina told us she was glad to have us there as they didn’t have any other volunteers. I didn’t fully grasp the gravity of this until the day was over… 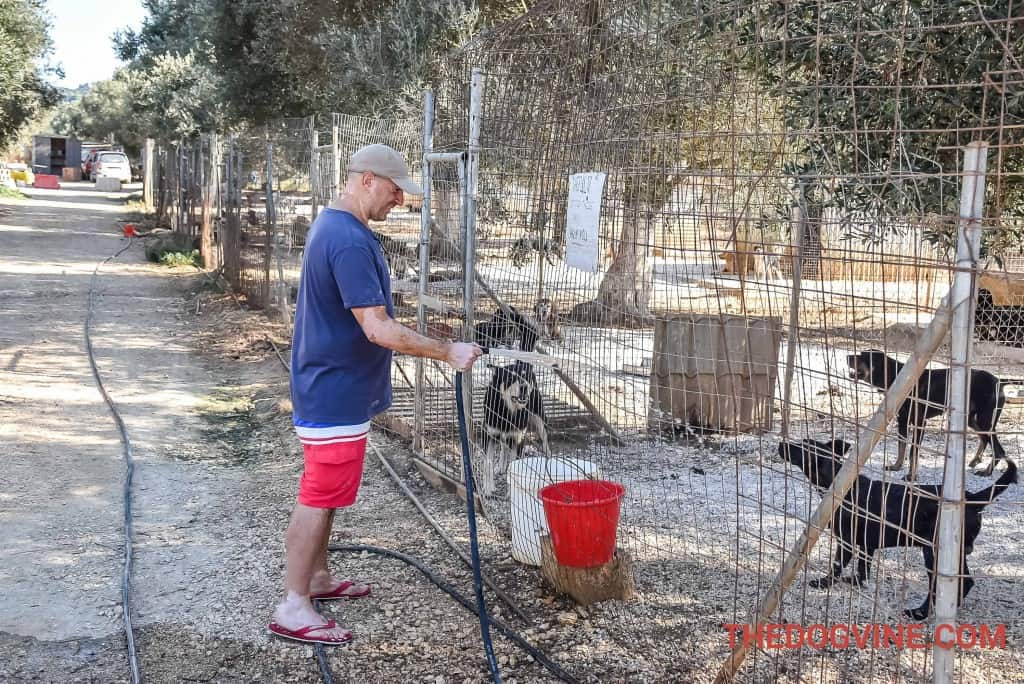 Our job was to empty, clean and refill all the water containers and clean the food trays in the pens. Let me tell you, this sounds deceptively easy. Some of the water containers were so huge I could barely lift them and with each dog enclosure home to several dogs, there were multiple food containers to clean in each one. There were three of us and we only just about managed to finish the job by the end of the day. 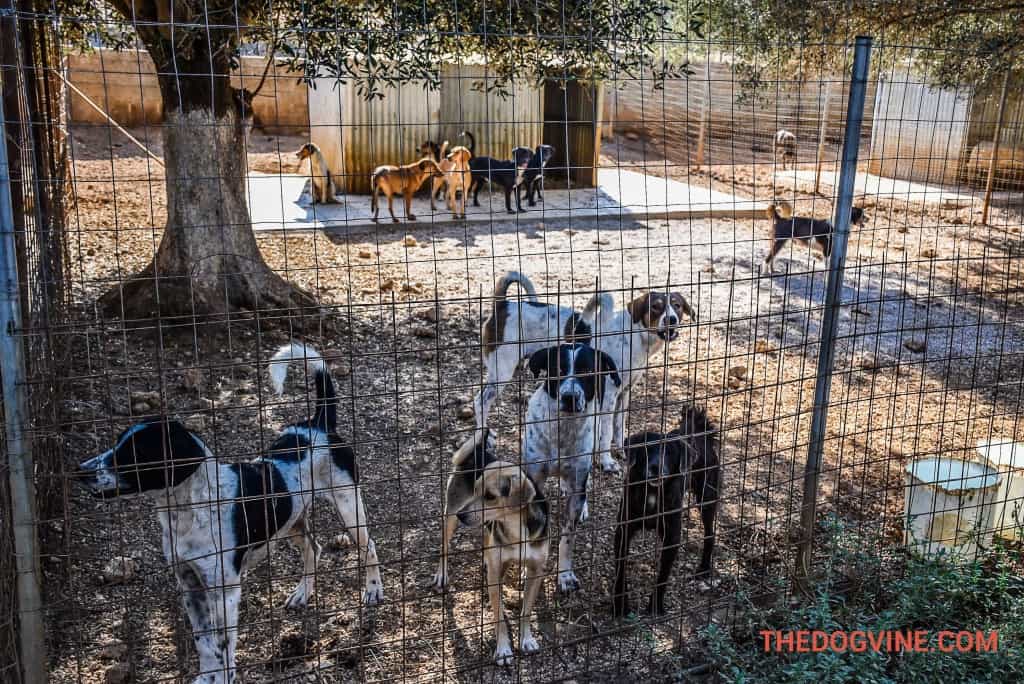 Of course every time we went into one of the enclosures the more friendly of the dogs hurled themselves at you desperate for some affection which slowed things down. It was heartbreaking to only be able to give these adorable pups a couple of minutes of affection before having to move onto the next enclosure. 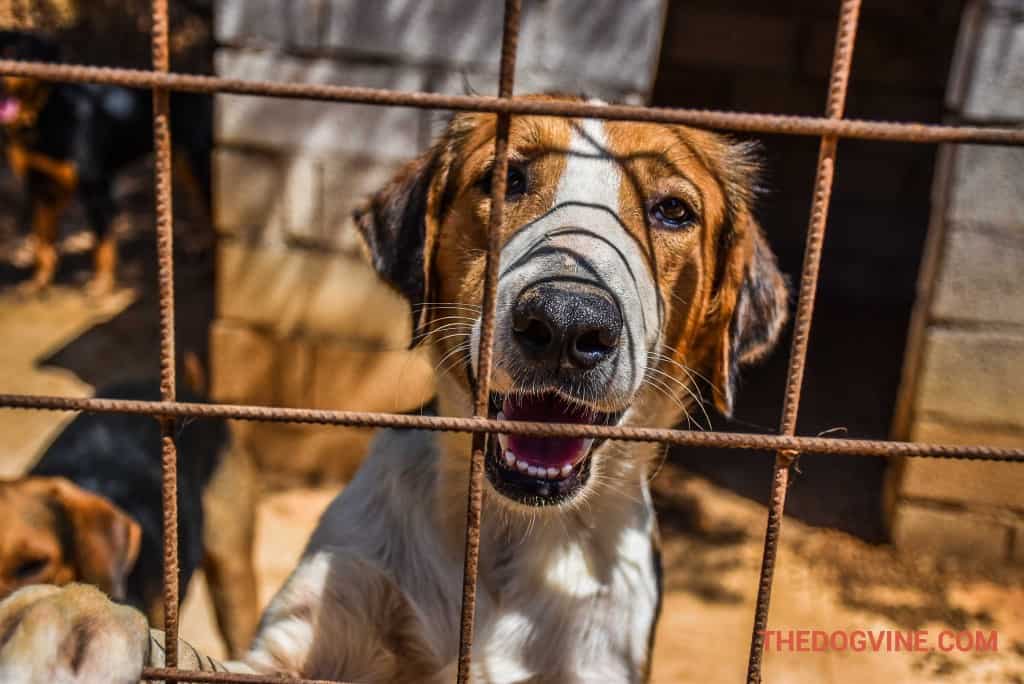 If that wasn’t heartbreaking, seeing dogs hiding in the corner terrified of human contact because of what had happened in the past, certainly was. 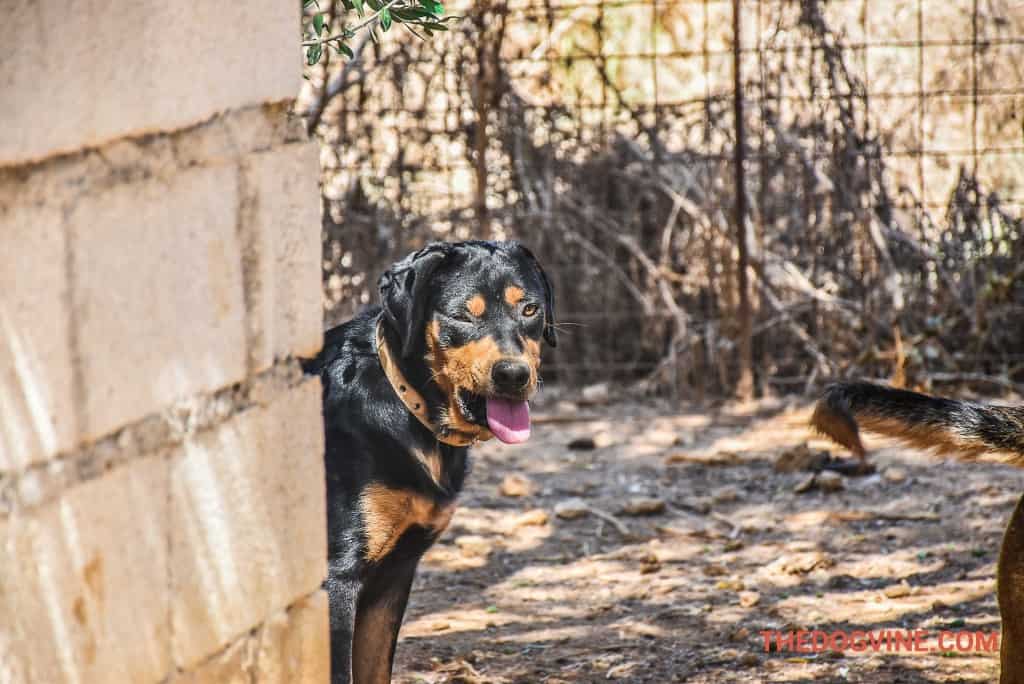 As we were in and out of the cages we spotted one poor dog with about ten big fat ticks on him. Cue our first lesson in how to remove ticks, all of ten of them at the same time! 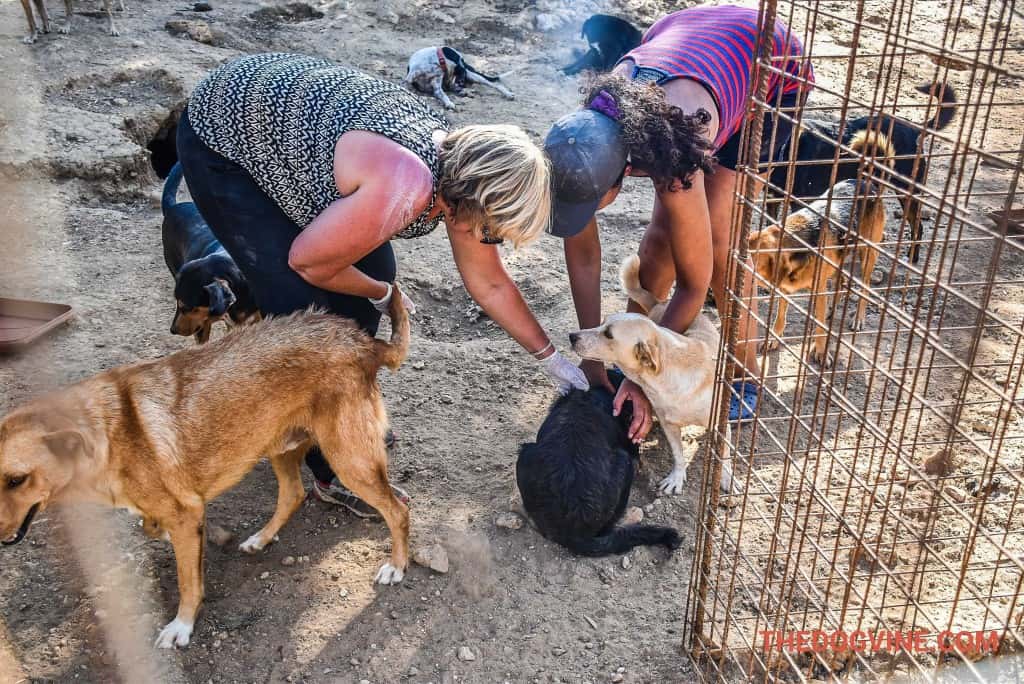 The Daily Struggles At ARK

Late afternoon, preparations start for the evening feeding. Each day ARK gets through approx. 240 kg of dry food plus wet food for those who need it. This means a bill of approx. 5,000 Euros per month just for food alone let alone any medical costs. 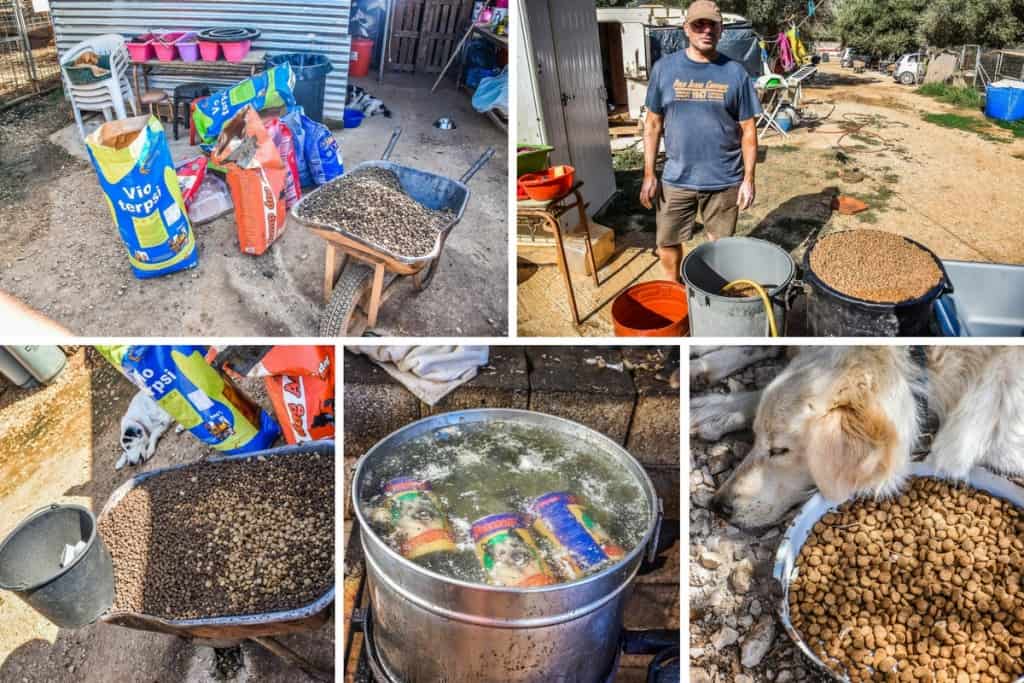 Making ends meet is a constant struggle. Especially in the winter, Marina often doesn’t know where she will find the money to feed the animals. ARK runs a sponsorship programme which costs 10 Euros / month to sponsor a dog. If every dog in the shelter was sponsored then it would go a long way to covering the food bill but sadly of the 350 dogs at ARK, only about 80 are currently sponsored.

The sponsorship programme is coordinated by Joyce Broekman, a long-term Dutch volunteer and also Marinas right-hand helper. Each sponsor and their chosen animal are proudly displayed on the adoption board. Joyce told me she hopes this will encourage more people who visit the shelter to sponsor an ARK animal. 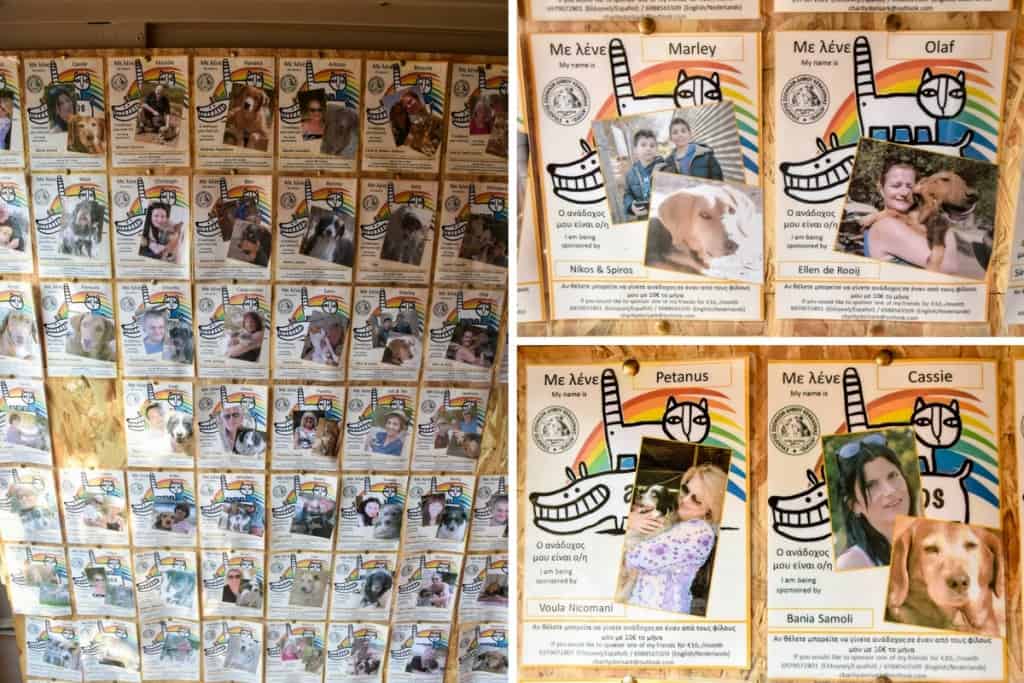 Many of the dogs need medical care when they arrive, one of the most common illnesses being Leishmaniasis which is a parasitic disease transmitted by sandflies.  It invariably spreads throughout the body to most organs with renal (kidney) failure being the most common cause of death, and virtually all infected dogs develop visceral or systemic disease. It is treatable, but of course this is expensive.

Mela, the dog that I am sponsoring this year has Leishmaniasis. Without donations, dogs like Mela won’t get the treatment needed to beat this disease.

Stamitsa was a bag of skin and bones when she was rescued in September, suffering from malnutrition, Leishmaniasis, cuts all over and missing half of one of her legs. Just two months later, after lots of love and care from ARK, Stamitsa is a different dog and well on the road to recovery…

Beautiful Savanna was thrown over the fence into a dog pen whilst she was heavily pregnant. The shock and impact caused the puppies to be ejected from her body. The dogs in the pen attacked and ate the puppies and badly injured Savanna. Savanna was so psychologically damaged from this experience that Marina took her home and she was only able to come to ARK after 2 years of rehabilitation where she now lives safely.

How Can You Help ARK

We left our day at ARK completely exhausted and the next day my back was so sore I could hardly walk. This was from just one day of work. Marina does this 365 days a year in fact she told us she hasn’t been able to take a holiday since ARK started as she needs to take care of the animals. There is no doubt that Marina and her volunteer team are true saviours for the strays of Kefalonia.

Since coming back home, I have been trying to think of ways to help ARK. I’m not a natural fundraiser but I have found a way to lend a helping hand. I’ll be using the rest of my holiday this year to go back and volunteer for a week later this month. Honestly, that’s quite an intimidating prospect as one day was tough physically but I’m trying not to think about that part!

I’ll be posting updates from my trip to ARK on our Facebook page so look out for those. In the meantime, here’s how you can support ARK should you wish to, plus some photos of the adorable ARK residents from our last trip: 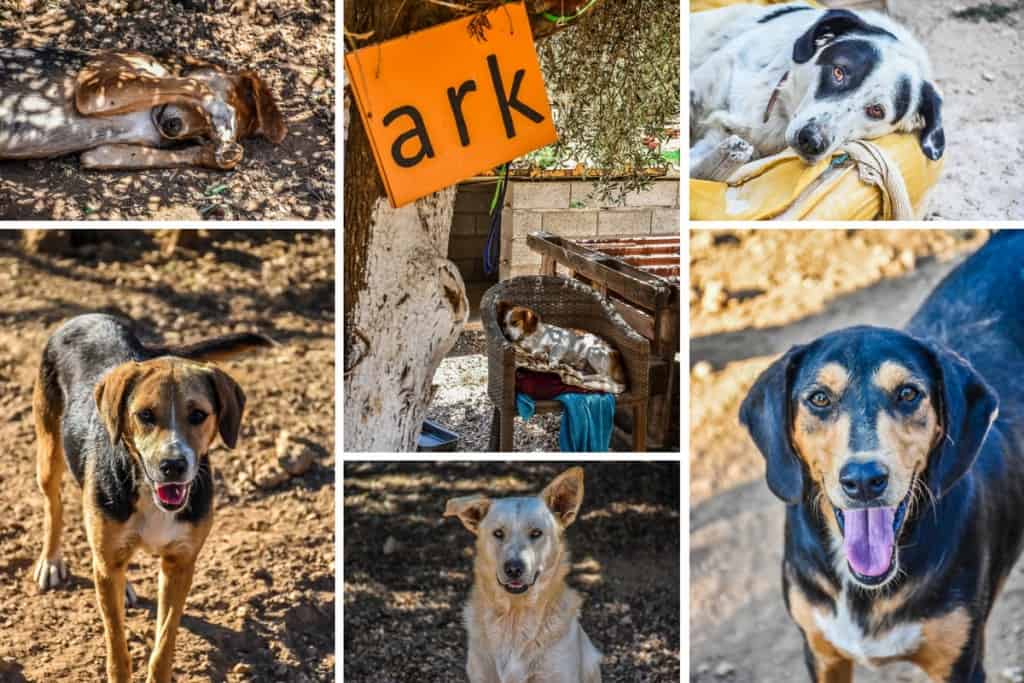 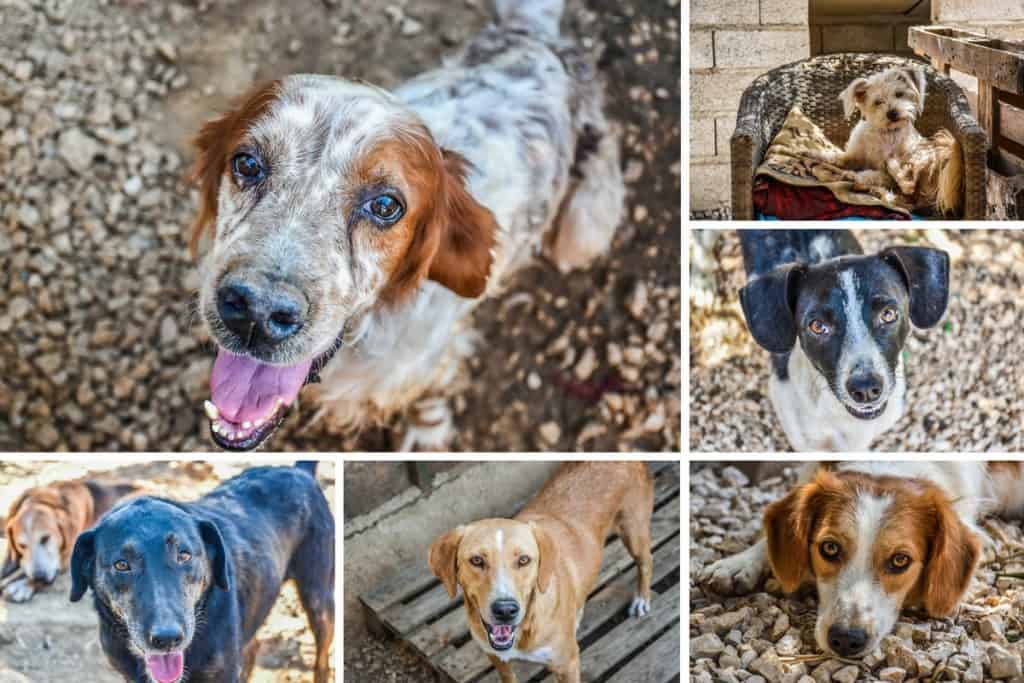 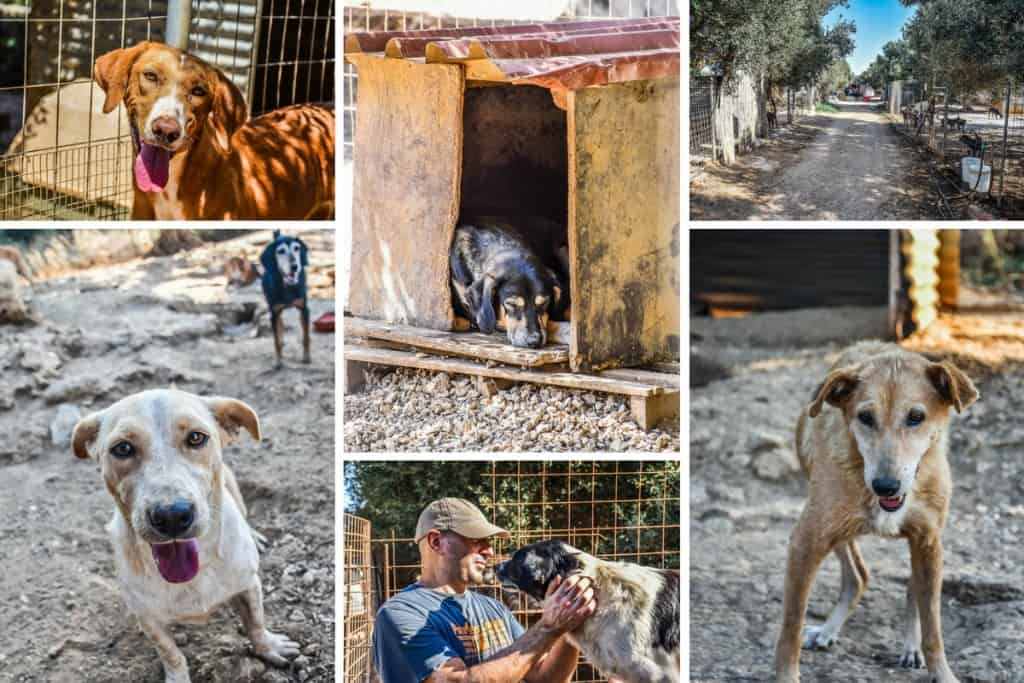 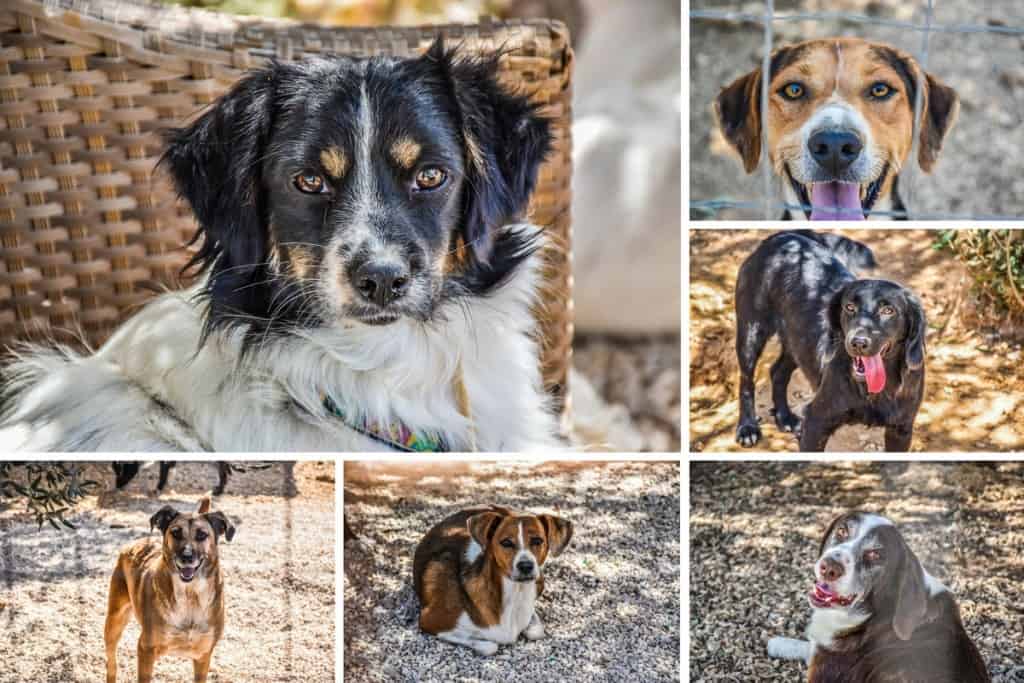 These photos and more are up our Facebook page