Celebrities & canines took to the red carpet for The Mirror’s Animal Hero Awards 2019 last month to ‘recognise and celebrate the most inspiring examples of bravery, dedication and resilience in the animal world’. Sadly at the last minute, due to Belinha not being well, we were unable to attend but fortunately, our good friend and four-legged guest ‘repawter’ Claude was able to step in to give us a dog’s view of the night.

Over to you Claude… 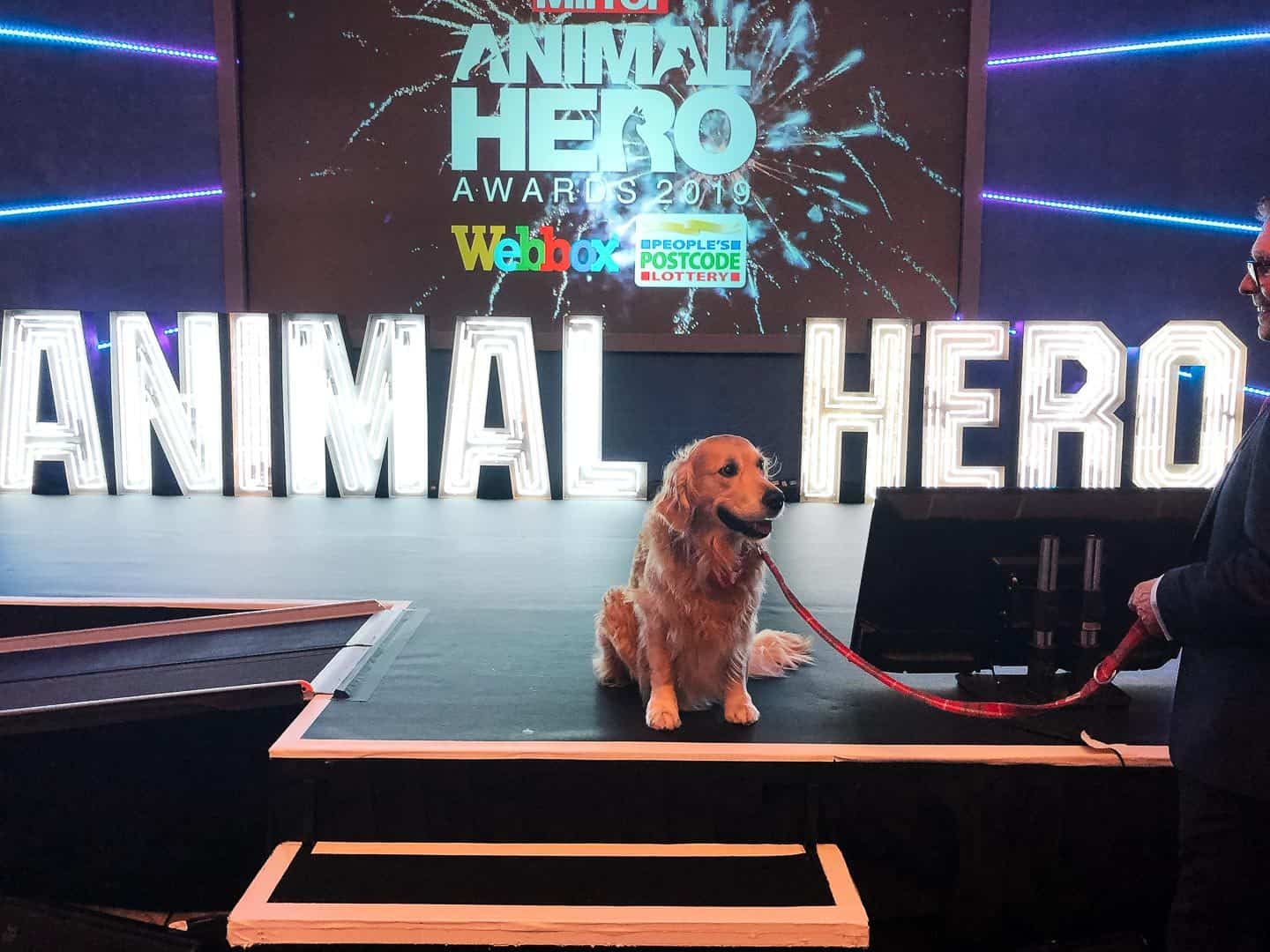 I was so excited to be allowed to go to the Animal Hero Awards held at the Grosvenor House Hotel in Mayfair on 30th September. Belinha from The Dogvine should have been there, but she was recovering from surgery so said I could go if I took photos for her and told her all about it. 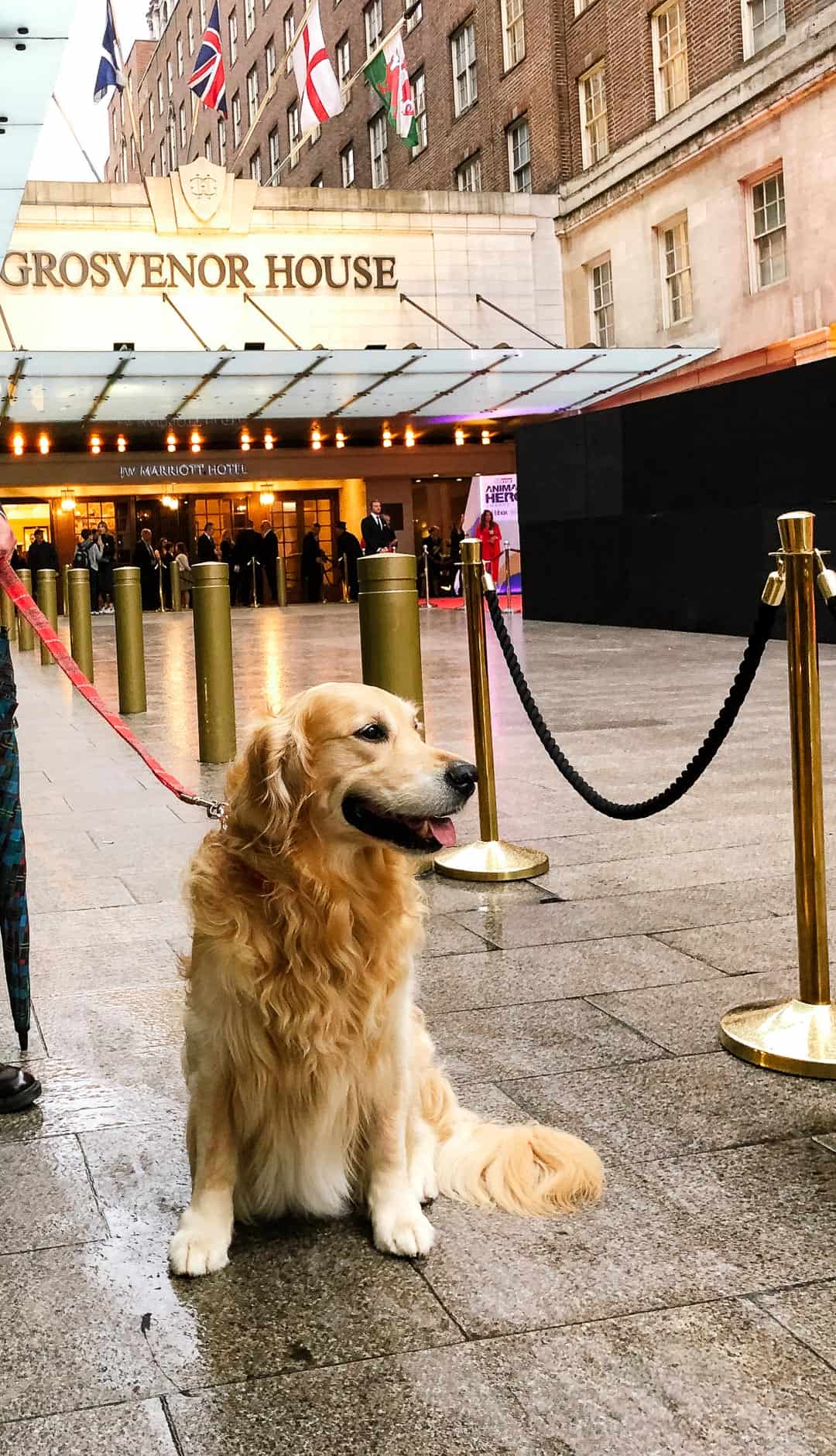 I took my first black cab to get there…had no idea they are mostly dog-friendly! Felt like a total VIP as I stepped onto the red carpet with cameras flashing and strutted my stuff – I even posed a few times, which is a rarity for me! 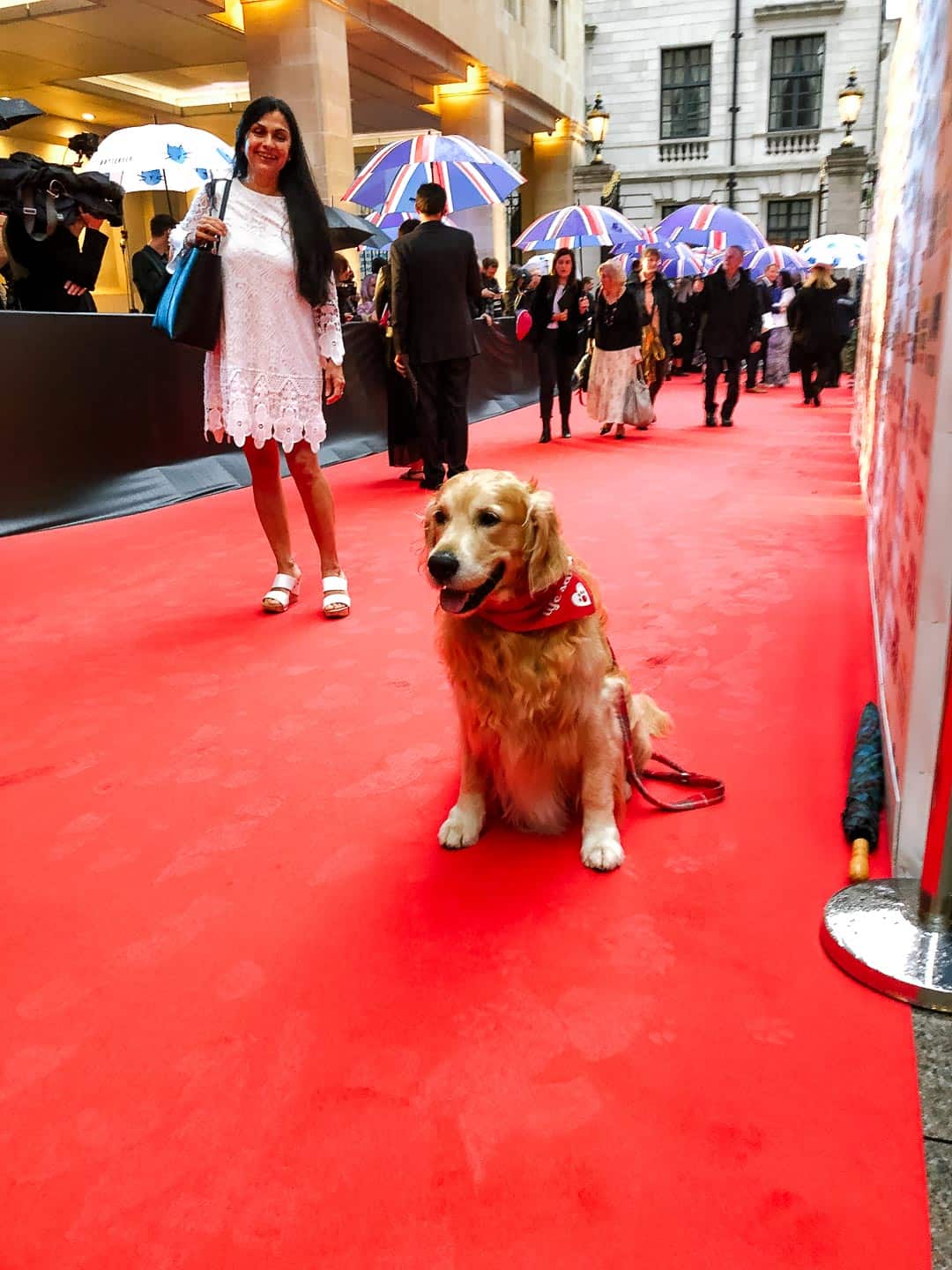 Then a lovely lady started chatting to me and the humans (who felt they had to accompany me). Turns out she was Linda Goodman, founder of anti-puppy farm CARIAD who won the “People’s Postcode Lottery Local Hero Award” for spearheading changes in the law and making personal sacrifices to illustrate the plight of puppy-farmed dogs.

She also played a crucial role in Lucy’s law, which “requires animals to be born and reared in a safe environment, with their mother, and to be sold from their place of birth”. I was so lucky to be born to a registered breeder, but it makes me really sad to know that so many didn’t get this basic doggy right. This will change in April 2020 because of people like her and Marc Abraham. I had some photos with her and Peter Egan who is also a supporter and then made our way inside through our own entrance.

We went through to the drinks reception and had a long chat with a policeman Kevin Kelly who won a special recognition award for his services to wildlife. Also met Ben Fogle and his lovely black lab. Mum said he was handsome, I presume she meant Ben Fogle and not the black lab who I thought was far better looking.

Then we went into the dining room, which was beautifully laid out. We all had place settings, there was even one for me! Dinner was served, vegetarian of course for the humans which they all said was delicious. Meanwhile, Marcel Le Corgi and I amused ourselves under the table stealing treats from Mum’s bag.

So many celebrities support the Animal Hero Awards which is great as they have high profiles so they can get messages out there that people will listen to. When they’d finished dinner, I decided to have a wander round to see if I recognised anyone. Made Mum come with me as it’s embarrassing and I had to play it cool, anyway I couldn’t blame her for wanting a photo.

After dinner, they started the awards, and the theme was “Who’s saving Who.”

I was already aware of Lucy’s Law through the All Dogs Matter events and Battersea Rescue with Paul O’Grady on TV. But to be honest, I hadn’t really thought much further than dog/cat welfare and how much we rely on humans. Turns out there are lots of amazing and kind humans trying to stop cruelty to every type of animal and who educate humans to be more compassionate. I’ve helped dogs by donating blood but felt very humbled when I saw the contributions some of the dogs have made and also how brave some have been.

Two of my friends won awards so I was clapping my paws like crazy! Romanian rescue dog Fleur who survived against all the odds won the “Battersea Rescue Animal of the Year”, and Barrie, who was rescued from war-torn Syria won “Inspirational Animal of the Year”. Unfortunately, I didn’t have the privilege of meeting Mali who was “Hero Animal of the Year” for his heroic efforts to keep British special forces safe while they raided a Taliban-held hotel in Kabul. But Barrie and I had a chin wag about how we dogs give back to our humans when they take such great care of us. You can read all about the inspirational Animal Hero Awards winners (two and four-legged) here.

Representatives from Battersea were there to welcome us dogs (26 of us) and provided a special quiet room if we needed it. Water bowls from Webbox were everywhere and we got goodie bags at the end from Webbox and the People’s Postcode Lottery so we couldn’t have asked for more.

It was raining when we left so got a second black cab of the night to the station. But the driver started chatting to us and then decided to take us all the way home for half the usual cost…see what I do for my humans!

All in all a pawsome end to a fabulous evening, thank you for such a special night all the humans at the Animal Hero Awards!

Photos by Claude's humans. Claude would like to add a disclaimer for the photos as his humans are in training (as his personal paparazzi).