Sadly, Abbey could be the poster girl for another case of irresponsible breeding gone wrong. This beautiful 14-month-old Staffie Cross was discovered dumped in the Grand Union Canal, North West London soaking wet, shivering and underweight. After being spotted by a member of the public, Abbey was taken to The Mayhew Animal Home where it was discovered she had already been used for breeding despite being so young. 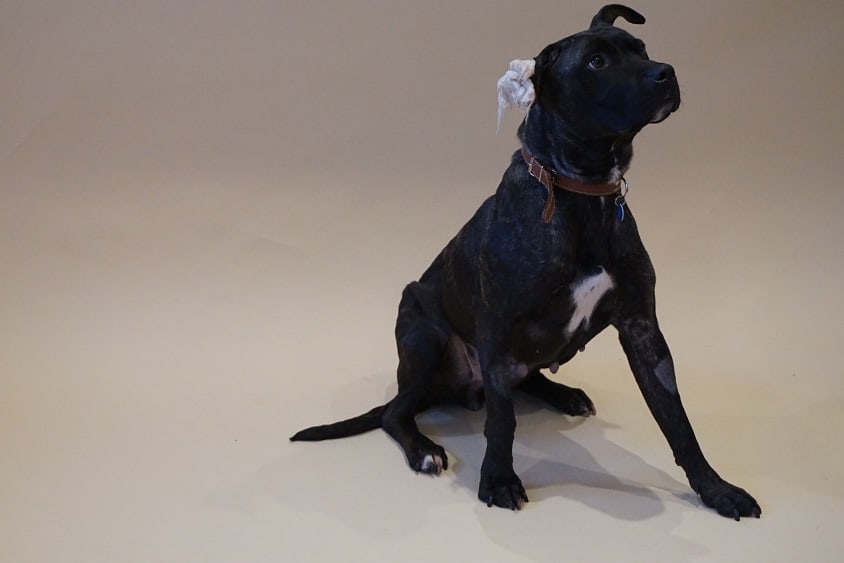 The Mayhew’s Head of Animal Welfare, Zoe Edwards, said: “ Unfortunately we see a lot of unwanted dogs like Abbey who have been bred purely to be sold for profit or used as a breeding machine. When they end up injured, unsold or no longer wanted, some irresponsible breeders abandon and dump them. We ask that owners think responsibly about where they get their pets from and consider adopting a rescue dog.” 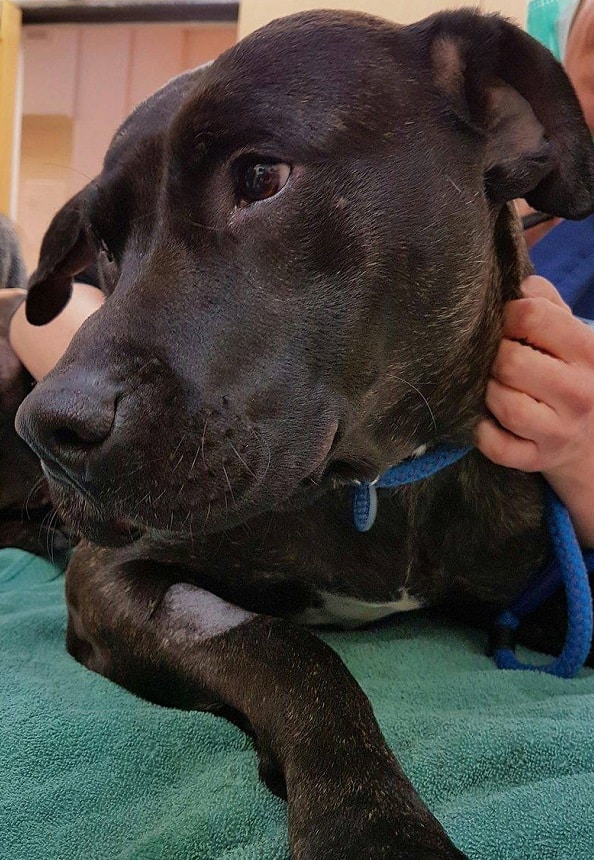 Abbey is an innocent victim of the mercenary backstreet breeding trade that forces dogs to produce litter after litter of puppies for easy cash. Just over a year ago, Battersea Dogs & Cats Home produced a Backstreet Breeding report that showed that of 560,000 puppies born in England each year, only 12% are born to licensed breeders. Poor Abbey is just one of the dogs paying the price of this shocking statistic.

Sadly, Abbey’s misfortune didn’t stop there. After undertaking a full health check, The Mayhew Vet Team discovered that poor Abbey was suffering from a chronic ear infection which wasn’t so easy to treat as it may first sound.

The Mayhew Head Vet, Dr. Ursula Goetz MRCVS, GP Cert (SAS) CVO, said: “We noticed that Abbey’s right ear was irritating her and she scratched it a lot. On further inspection, we discovered that Abbey had a very narrowed ear canal, so much so that hardly any air was able to get through the ear canal anymore. This usually happens through chronic ear infections, which causes the body to react with inflammation which will, over time, narrow the ear canal more and more until it becomes impossible to treat the ear other than with surgery.” 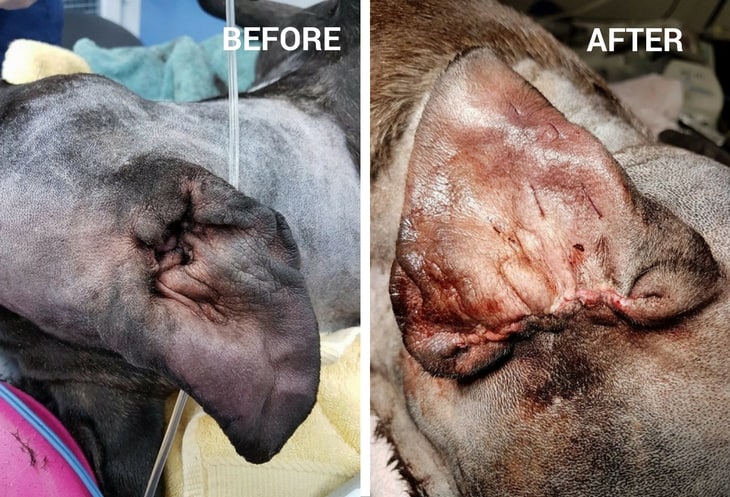 “Abbey had to have a Total Ear Canal Ablation (TECA) and a Ventral Bulla Osteotomy (VBO) on her right ear, which means that she had to have her whole ear canal removed and her middle ear flushed and cleaned out. The surgery will help take away the constant discomfort and soreness in her ear. If left untreated, the chronic infection can over time even cause damage to her sense of balance, meaning she might have developed a permanent head tilt to the extent of falling over and not being able to walk in a straight line. Thankfully this risk is now removed and Abbey is on the road to recovery.”

Despite having gone through all this, Abbey is a gorgeous girl with plenty of Staffie smiles to offer as you’ll see in the video of Abbey’s story…

The Mayhew are now on a mission to find Abbey a loving ‘furever’ home and the lifetime of TLC she so deserves and they need our help to share her story!

Once Abbey has been neutered and is fully recovered, The Mayhew Adoption team will list her on The Mayhew website. If you’re interested in being part of Abbey’s happily ever after, please contact The Mayhew. You can also sign up to the ‘Dogs by Email’ service by visiting https://www.themayhew.org/dogs and receive an alert whenever a new dog is added to The Mayhew’s website, including Abbey.

We’re definitely keeping our paws crossed for Abbey here at The Dogvine.

If you would like to donate to support The Mayhew’s work and help dogs like Abbey, please visit www.themayhew.org or call 020 8206 5870.

The Mayhew’s Animal Welfare Officers rescue neglected, abused and abandoned animals and work with communities to prevent issues arising in the first place. They also deliver a range of educational projects to tackle irresponsible ownership and provide support to pet owners in difficulty. The Mayhew also has a vet clinic on site which offers affordable preventative veterinary treatments, includ