Not only has the much-loved game of Bingo had a millennial makeover but it’s had a doggy makeover too at Dabbers Doggie Bingo in the aptly named Houndsditch. Can playing bingo be cool and is it something you’d want to do with your dog? We went along to find out… 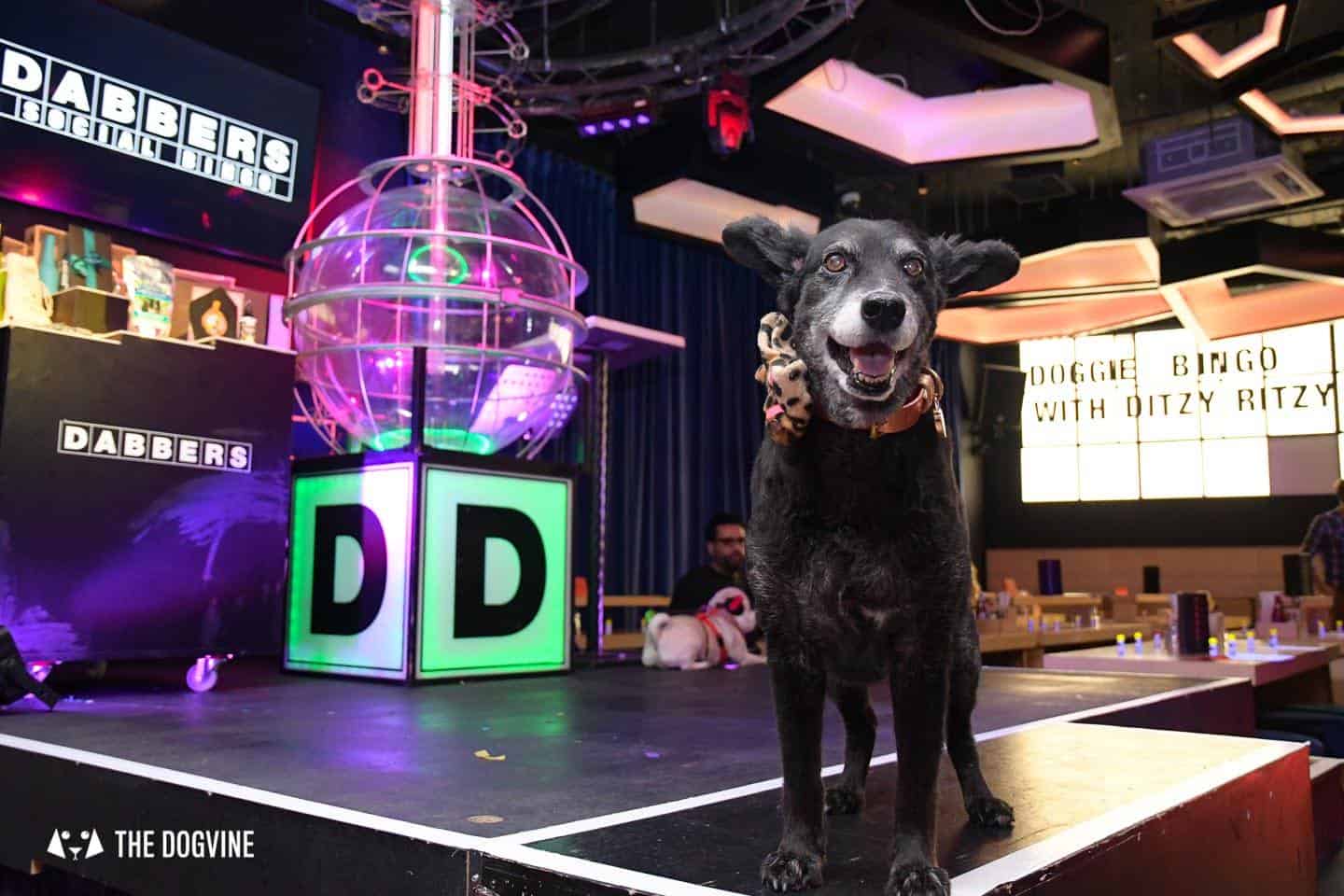 We’ll tell you all about it in our latest review, plus we’ve got an exciting Dabbers Doggie Bingo giveaway up for grabs too, but more on that in a moment.

Firstly, forget any memories you may have of bingo from the old days such as the one your Nan may have loved to do. Dabbers Social Bingo in Houndsditch near Aldgate has modernised this much-loved British tradition in such a way that any Houndsditch hipster will feel right at home. 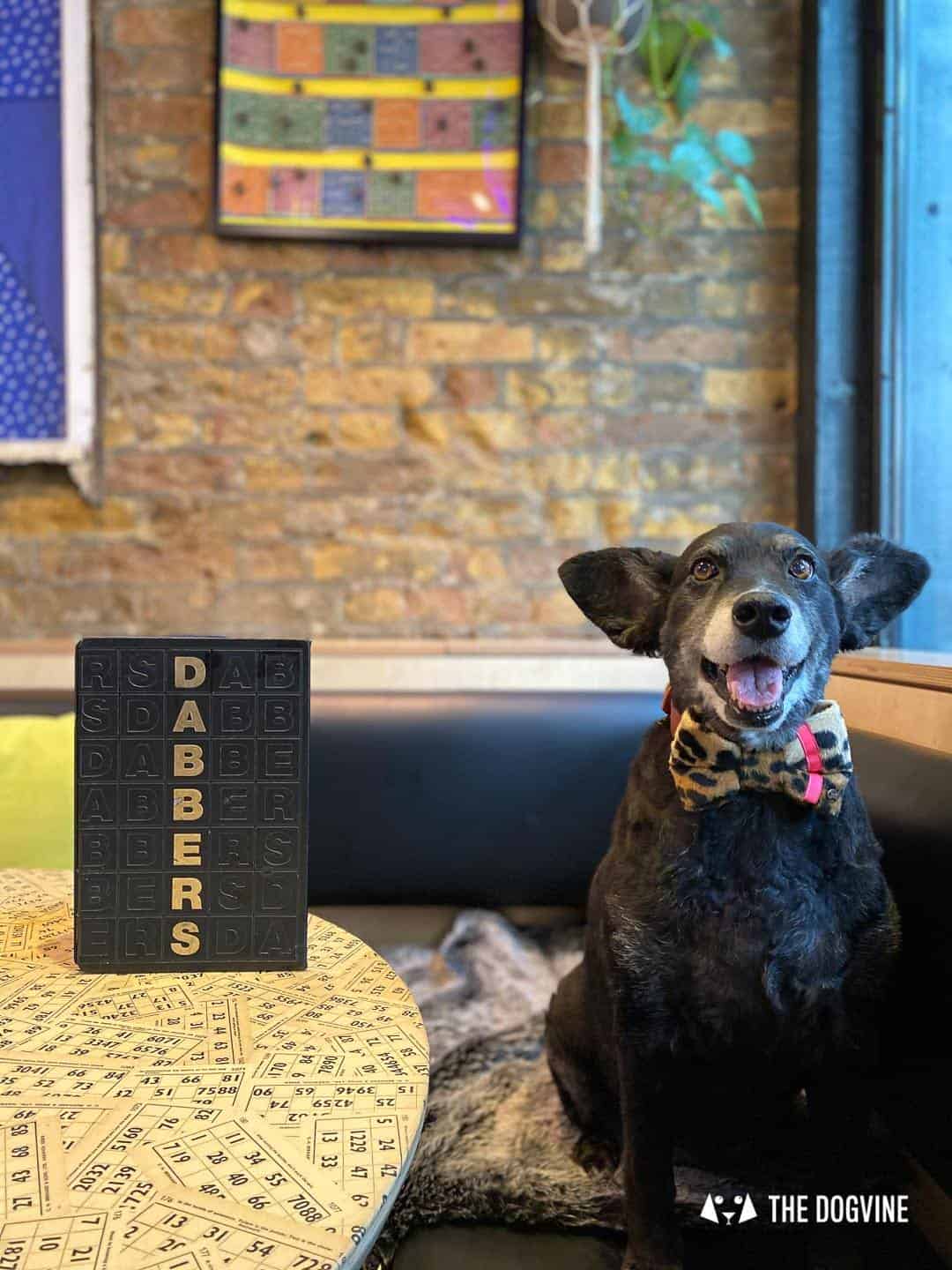 And of course, we wouldn’t be telling you all about it if there wasn’t Doggie Bingo on the lineup. Every other month, on a Sunday afternoon, you’ll find Dabbers Social Bingo full of hounds and humans, all ready to play to win at Doggie Bingo. 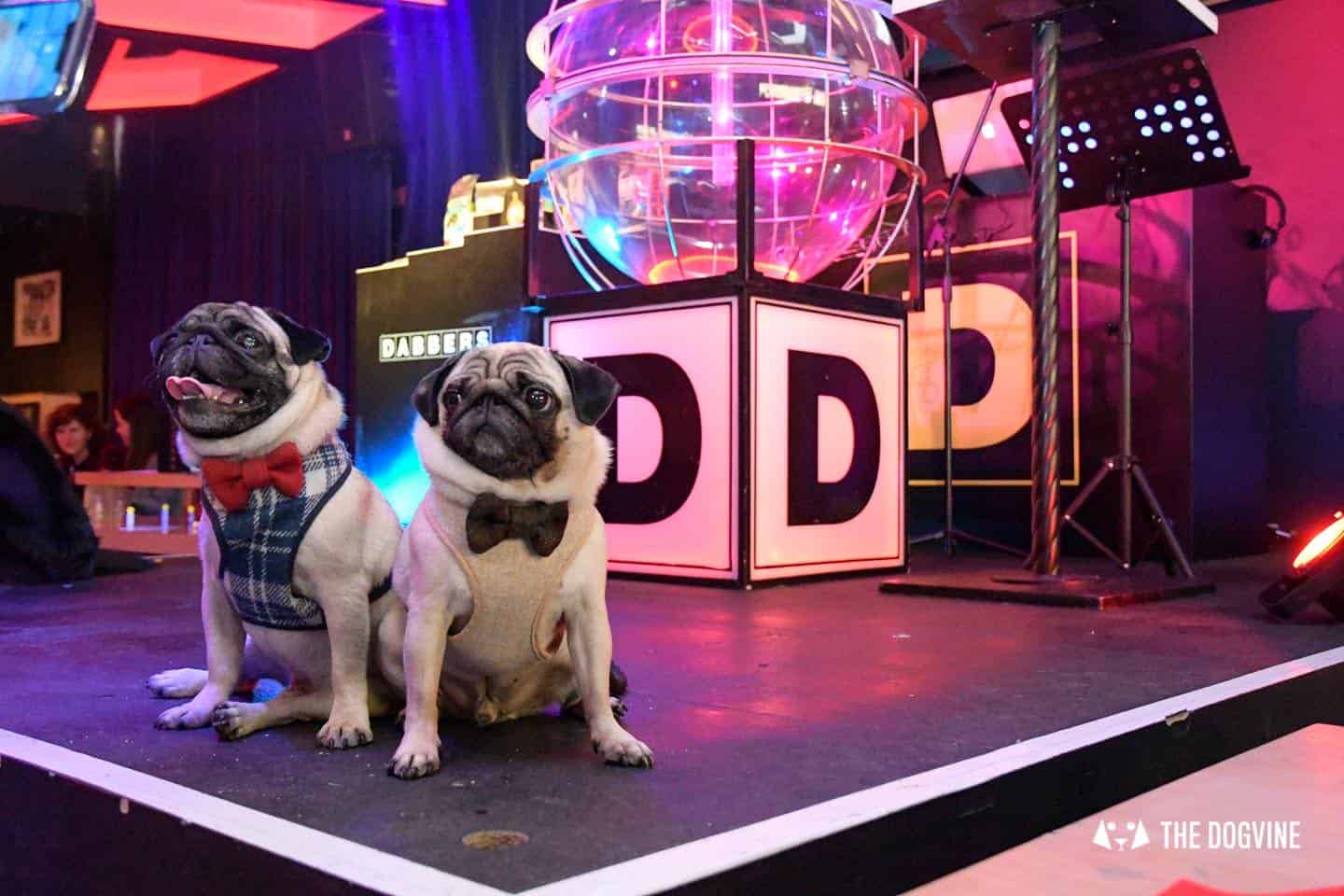 The Dabbers Doggie Bingo venue feels more nightclub than old school fuddy-duddy bingo hall. Seating is very sociable at long trestle tables with velvet-covered stools in the main part of the room, and there are also theatre-style seats available around the room as well as two exclusive Baller Booths available. 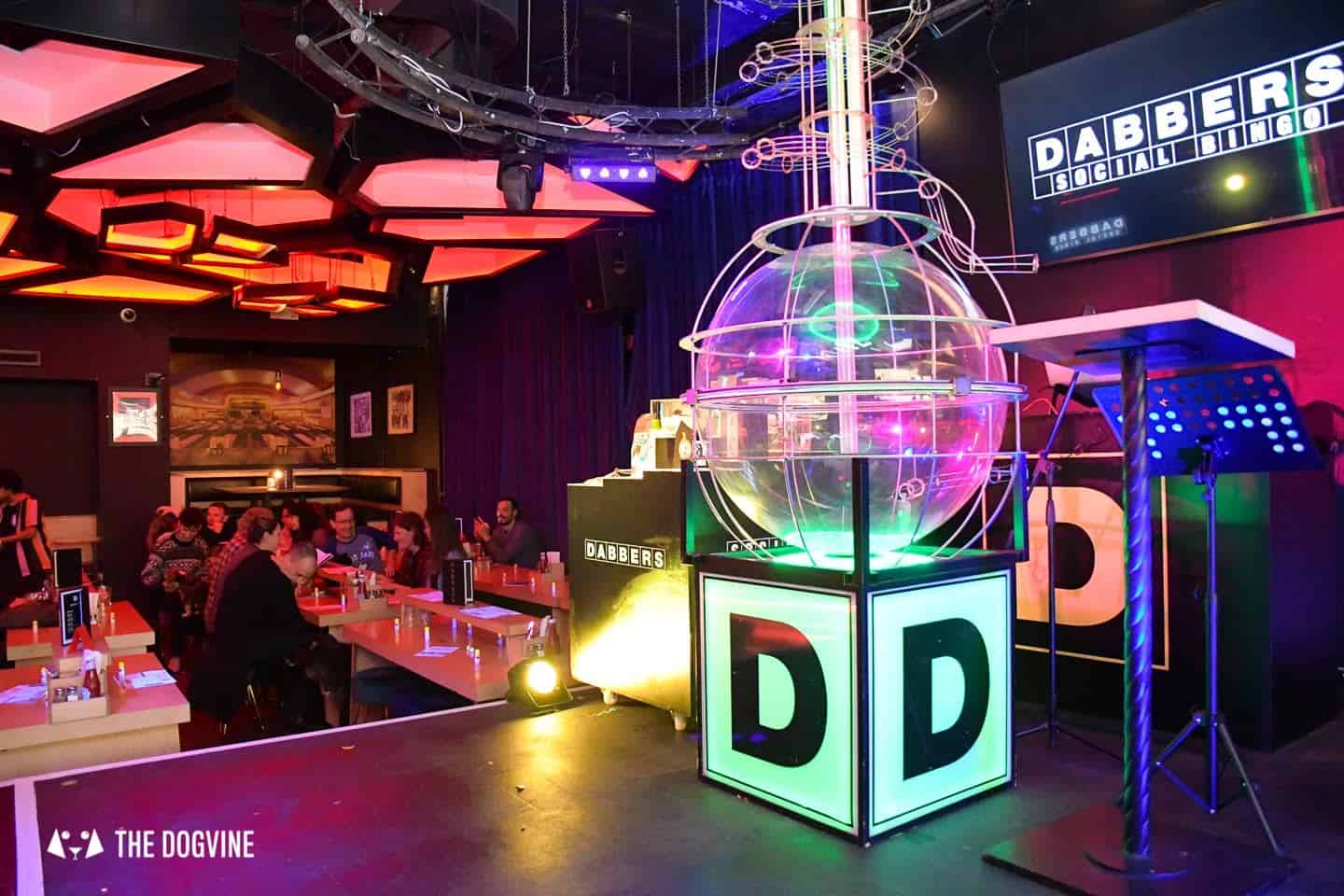 Doggie Bingo is presented by the very bubbly host Ditzy Ritzy who makes a fuss of all the dogs that come to play and does a great job of keeping the humans entertained too. 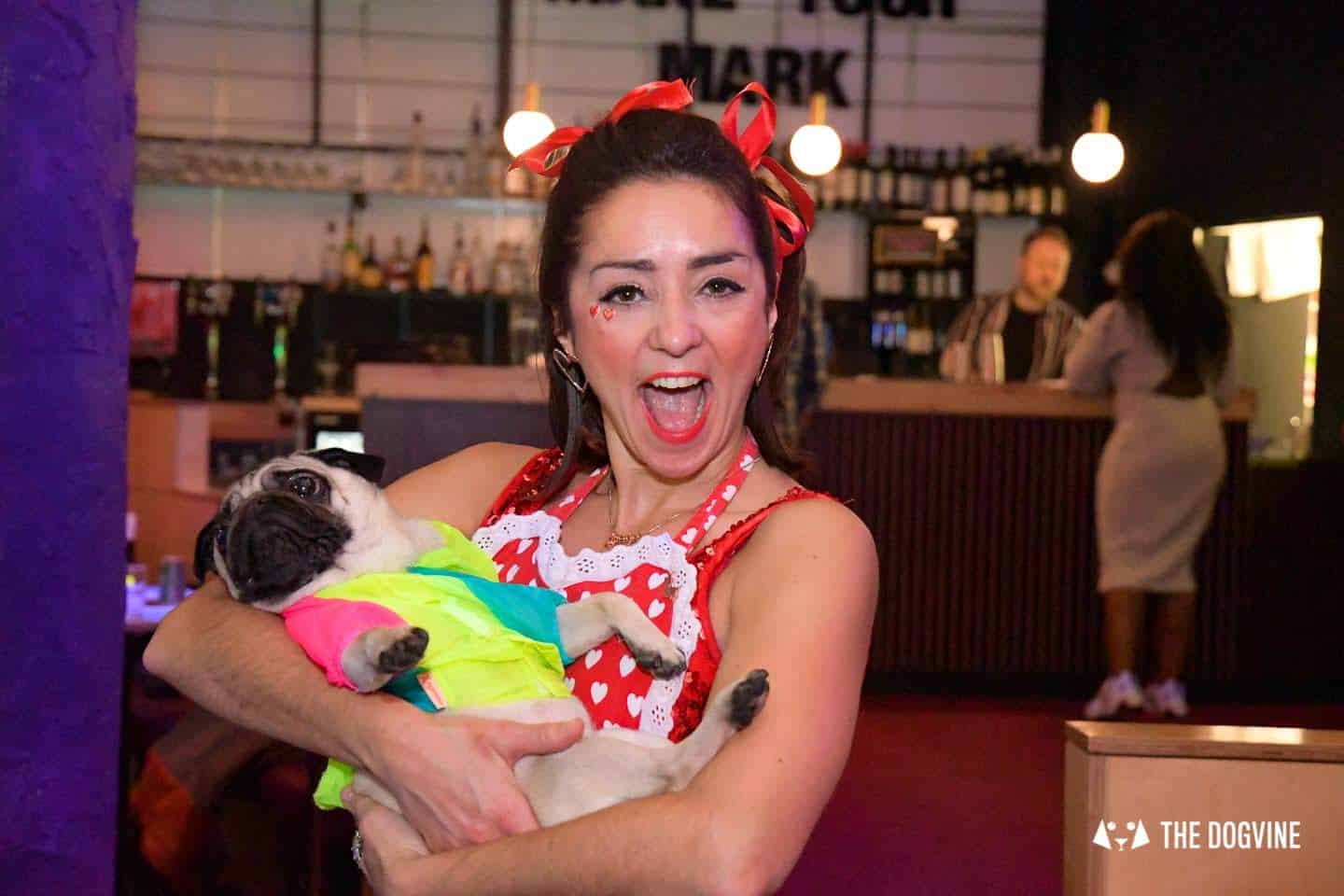 The actual bingo game itself is the same, with the objective being to cross off as many of the numbers on your bingo card as possible to reach…wait for it, a ‘Full Doghouse’. That’s after you’ve kept up with the fast-paced calling of the numbers of the bingo balls from the giant bespoke ball machine that sits centre-stage. 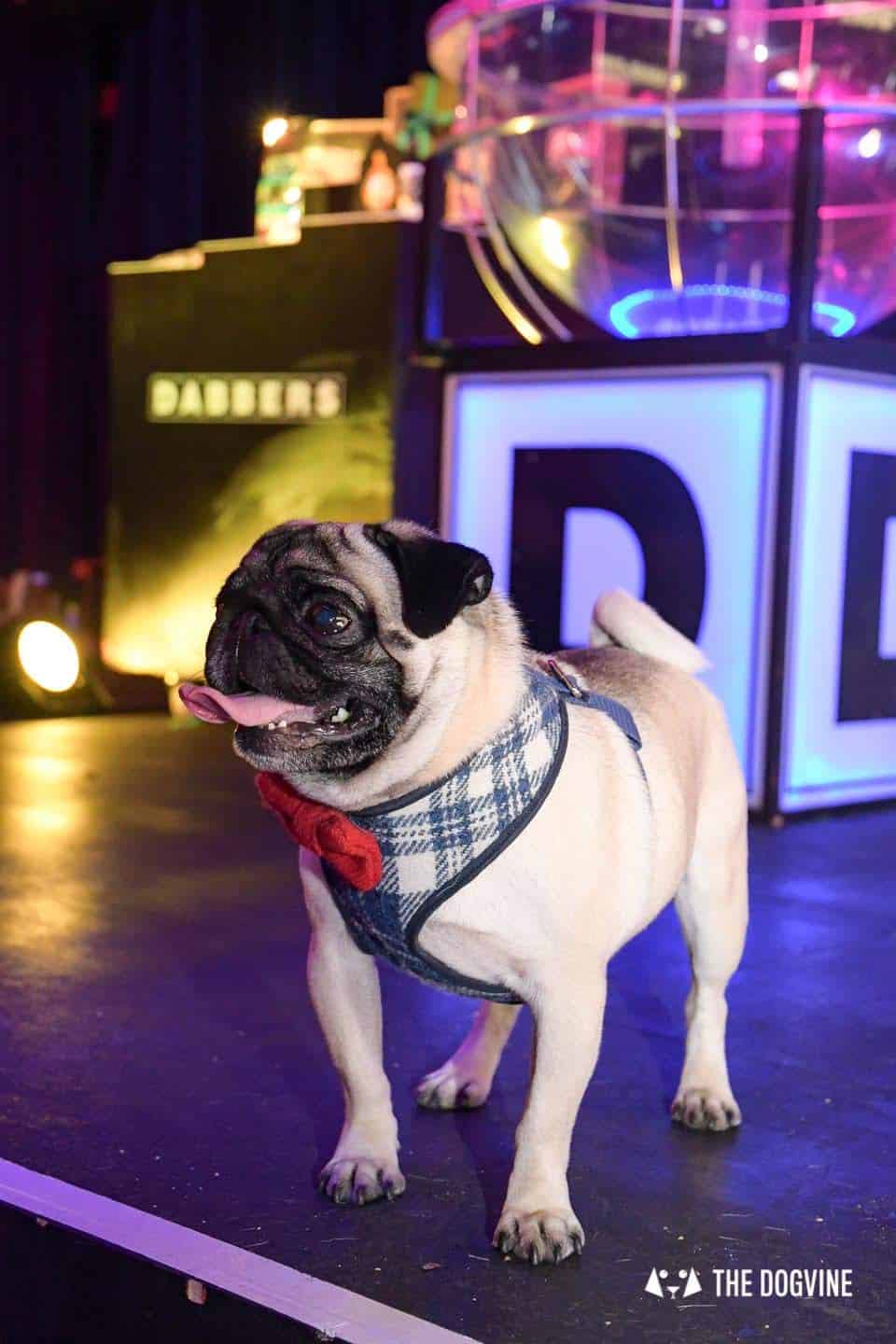 And if you’re waiting for the familiar bingo calls of days gone by, think again. Dabbers have given the bingo calls a makeover too, but they get a unique canine makeover for Dabbers Doggie Bingo! Listen out for calls such as ‘Fetching Sticks – No 6’, ‘Picking up poo – No 32’ and of course… ’Dogs of the Insta Scene – No 14’.

Given that the numbers come fast and furious, you have to really be on the ball (no pun intended) to make sure you don’t miss one and your chance to shout ‘Full Doghouse’. If you do manage it, there are some great pup prizes up for grabs from event sponsors Brewdog, as well as Pets Pyjamas and Dabbers themselves. 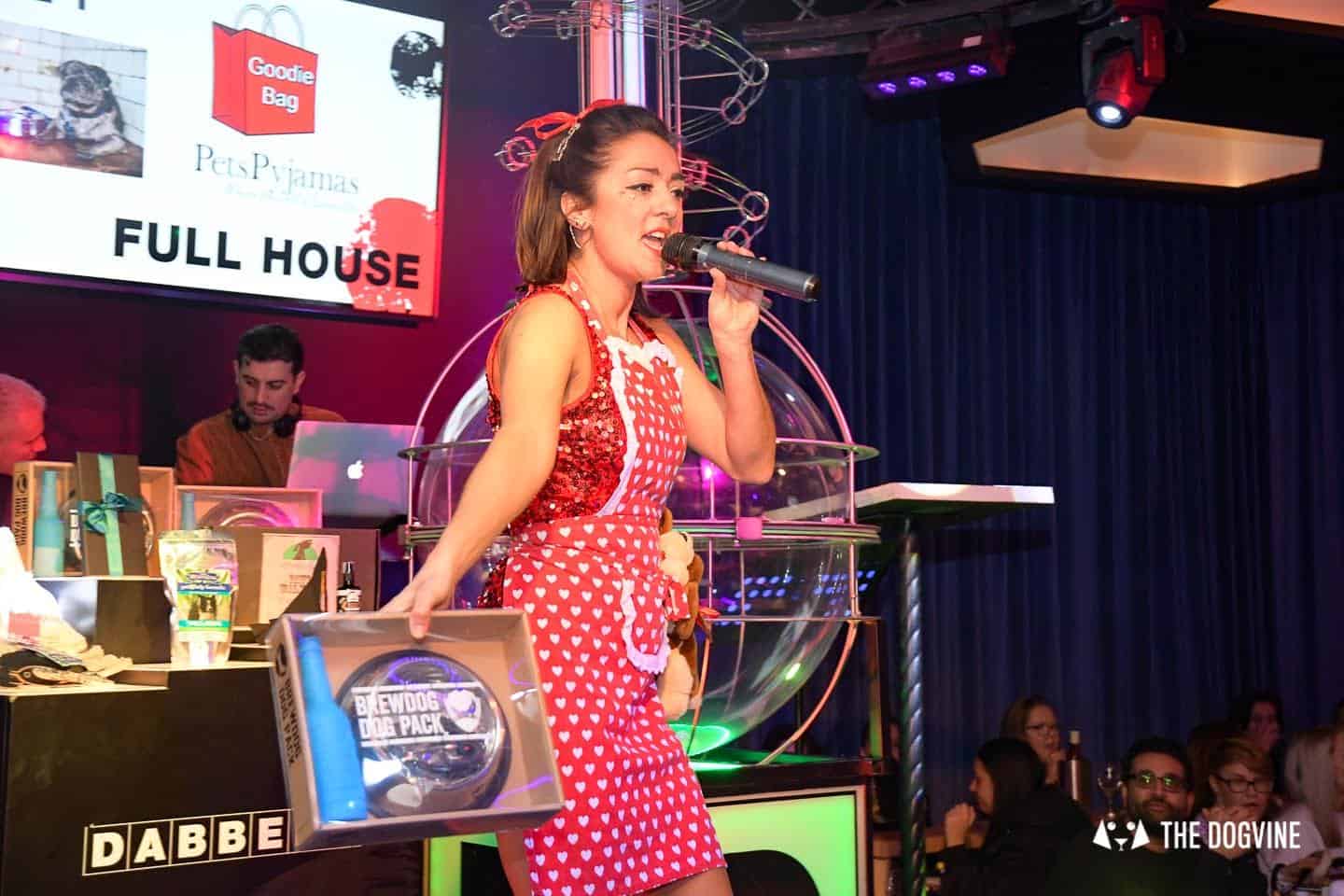 There are 3 rounds of bingo, each playing for a line and full doghouse with an interval between each game. Drinks are available from the bar, and there is also a tasty food menu on offer. If you plan to eat, my tip would be to get their early or wait to the interval to order. I made the mistake of ordering food just before the first bingo game and I can assure you that trying to eat whilst keeping up with crossing numbers off the bingo card was too much! 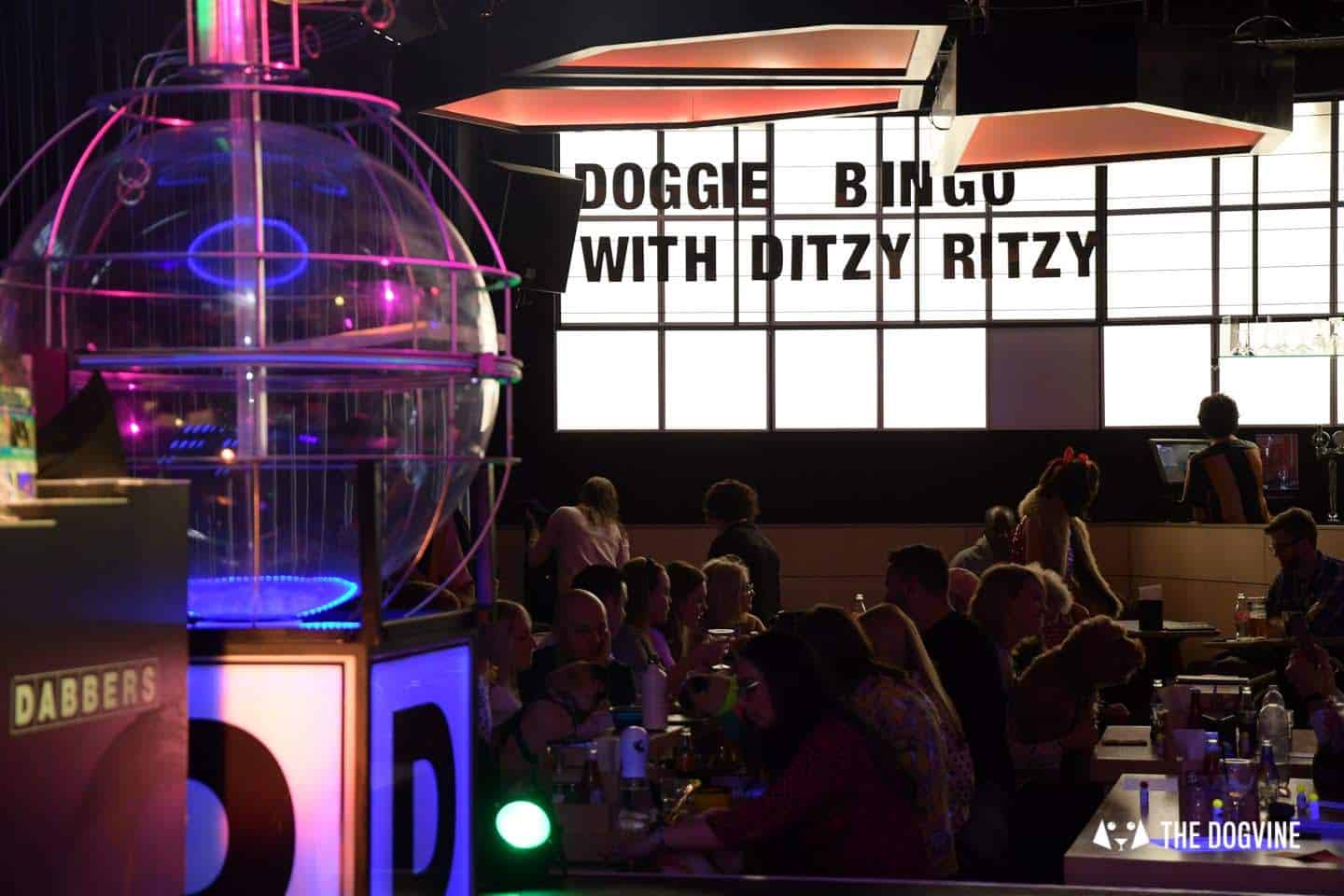 For the pups, you can request water bowls from the staff and doggie treats are handed out in the break too. 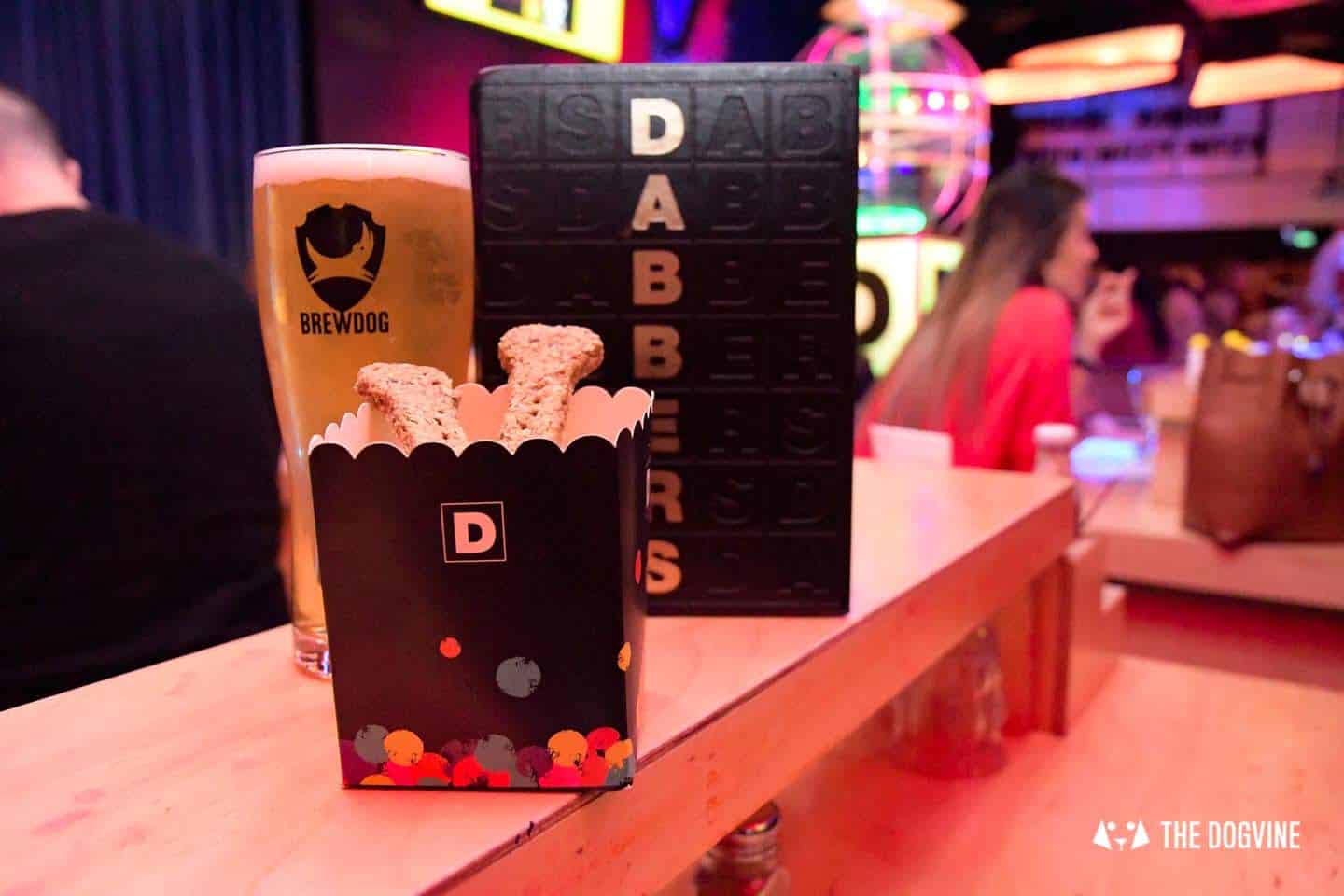 Also between games, there’s the chance to get on stage and put your best paw forward in the ‘Best in Show’ or ‘Best Trick’ competitions with more prizes up for grabs of course. Phoenix the Border Collie took home the Best Trick prize for a spectacular display of doggy dancing and Best in Show was Bulldog Zeus (who you may recognise from as the winner of the Windmill Clapham Doggy Christmas Jumper Competition). If there had been a ‘Best Dressed’ prize, then Gizmo the (Cupid) Pug would have won that one, paws down.

Was it a Paws Up for Dabbers Doggie Bingo? 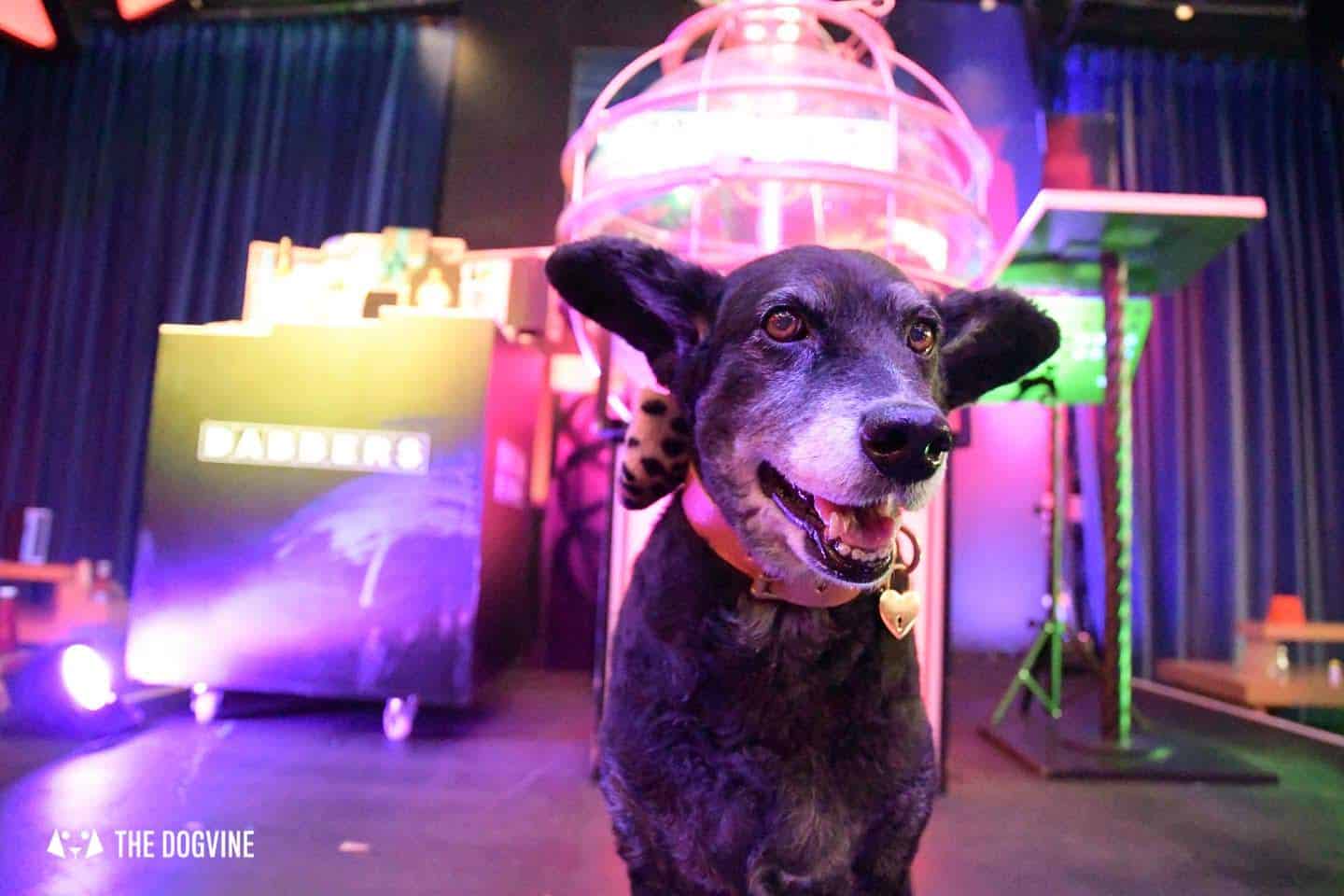 Before going to Doggie Bingo, I’m not sure you would have found me at a bingo game. However, now that I’ve been, I can say that Doggie Bingo was a lot of fun and a great thing to do with a group of friends – two and four-legged. And if you happen to be a bingo aficionado and have a dog, then this is a no-brainer.

As for the dogs, they all seemed to be having a good time with their humans. However, as things can get quite high-energy and by the nature of the social seating, also quite busy, this event probably wouldn’t be suitable for nervous pups. If you have a larger dog, you may also want to consider booking either the Theatre Style seating or one of the Baller Booths so they have more space.

If you and your pup fancy a game of Doggie Bingo, then the next Dabbers Doggie Bingo session is on 5th April 2020. Of course, we’ll also add future Doggie Bingo events to our London Dog Events Calendar as they’re announced. 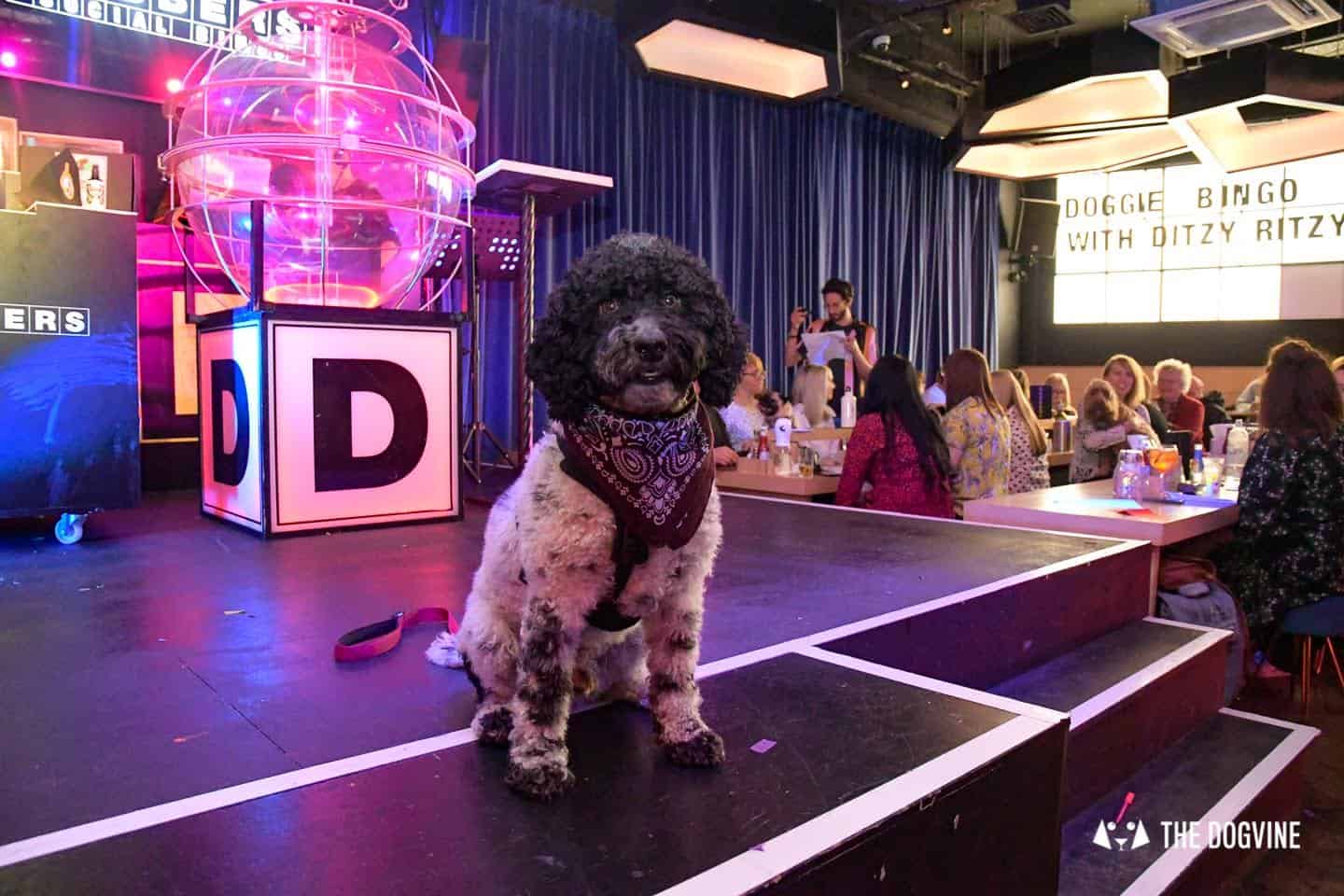 When: Every other month, on the first Sunday of the month. Doors open from 1pm with Doggie Bingo starting at 2pm

Getting There: Aldgate is the closest station but Liverpool Street and Tower Hill stations are also within easy walking distance

Tickets: Doggie Bingo tickets are very reasonable at £12 per person for Social Seating or Theatre Style Seating and dogs go free (one dog per adult)

If you’ve read our review and would like to get your paws on some Doggie Bingo Tickets then you’re in luck, as we’ve teamed up with Dabbers Social Bingo to GIVEAWAY the 12 person Baller Booth plus Doggie Treats and 2 pitchers of Brewdog Beer for the humans! 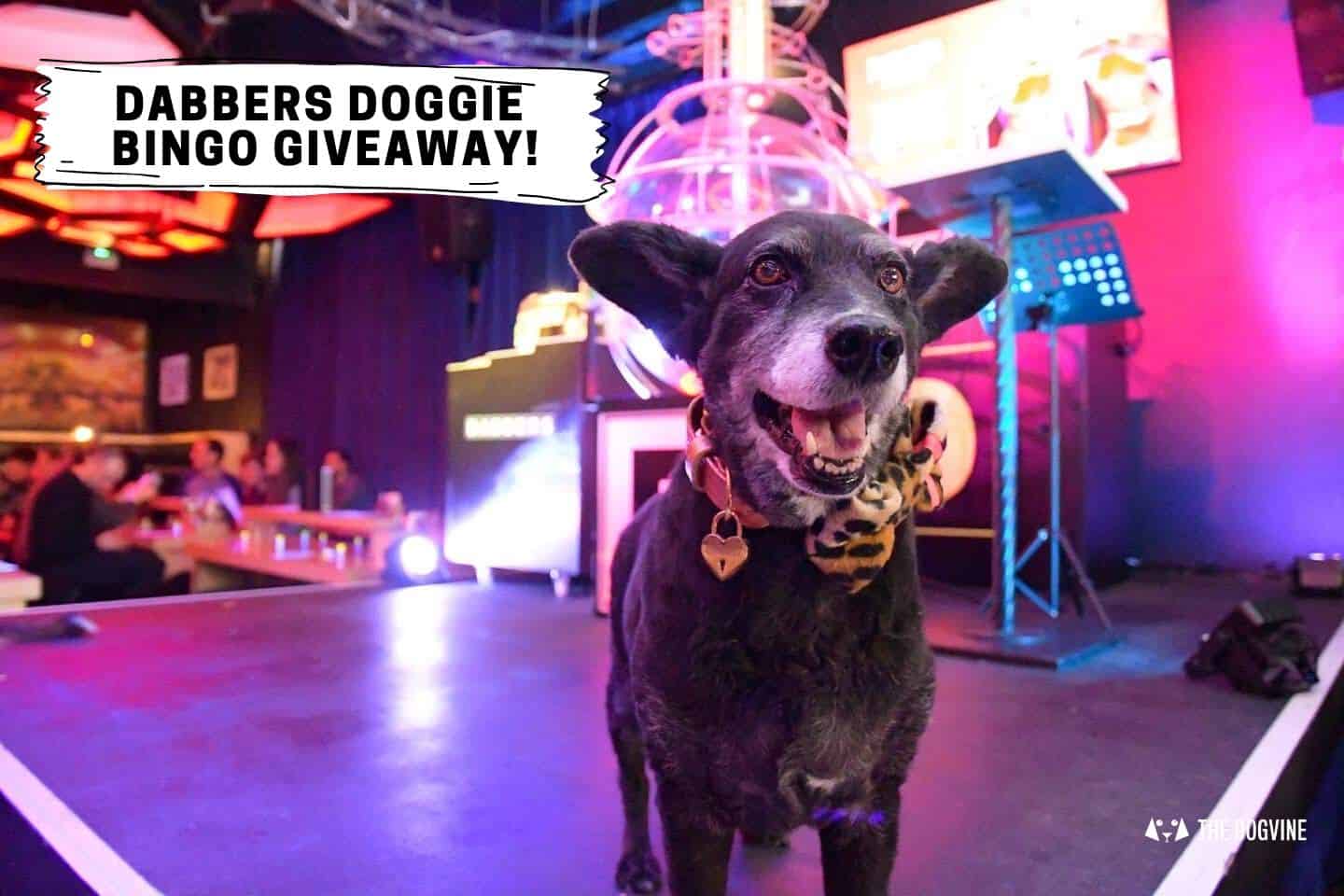 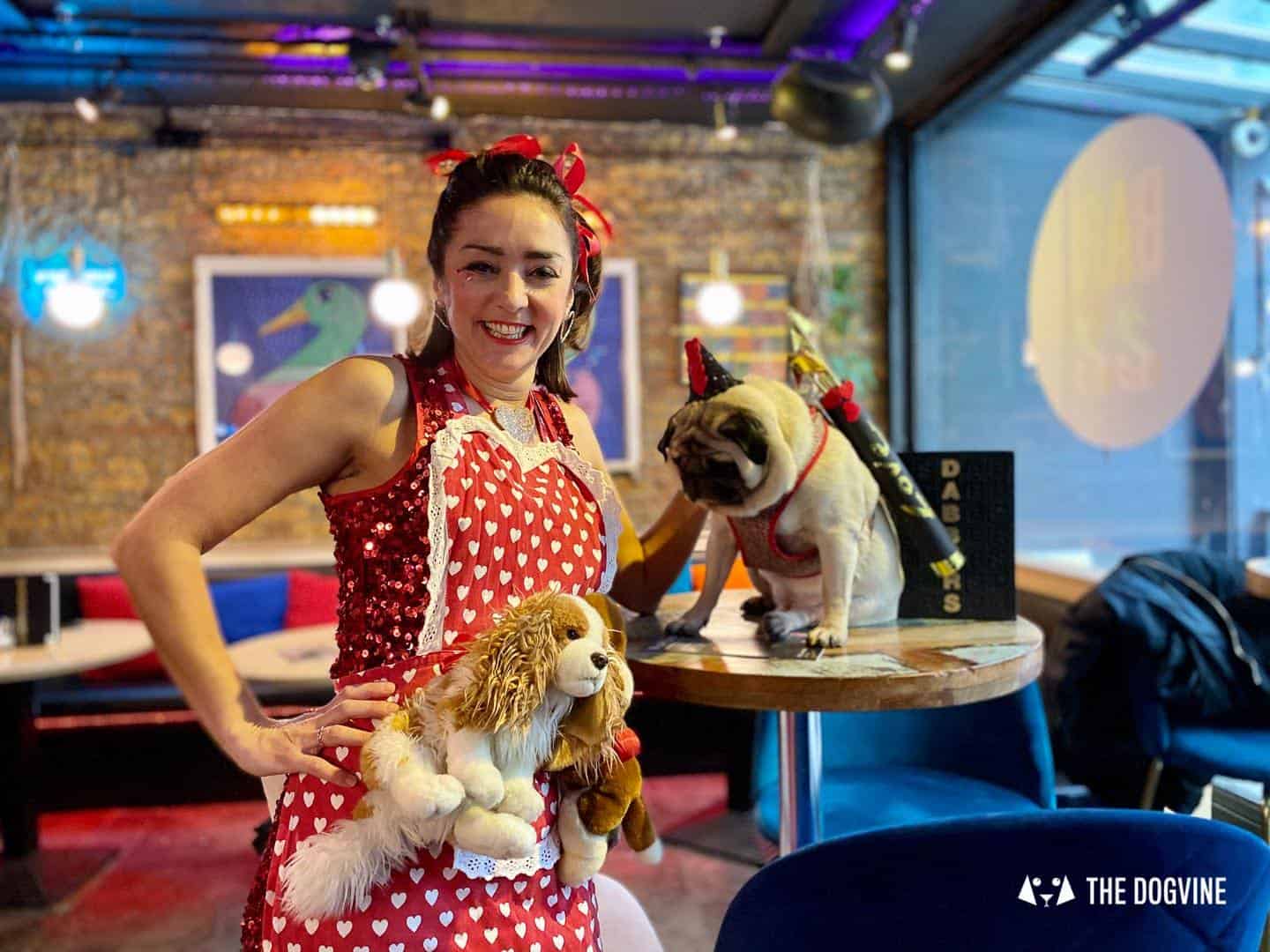 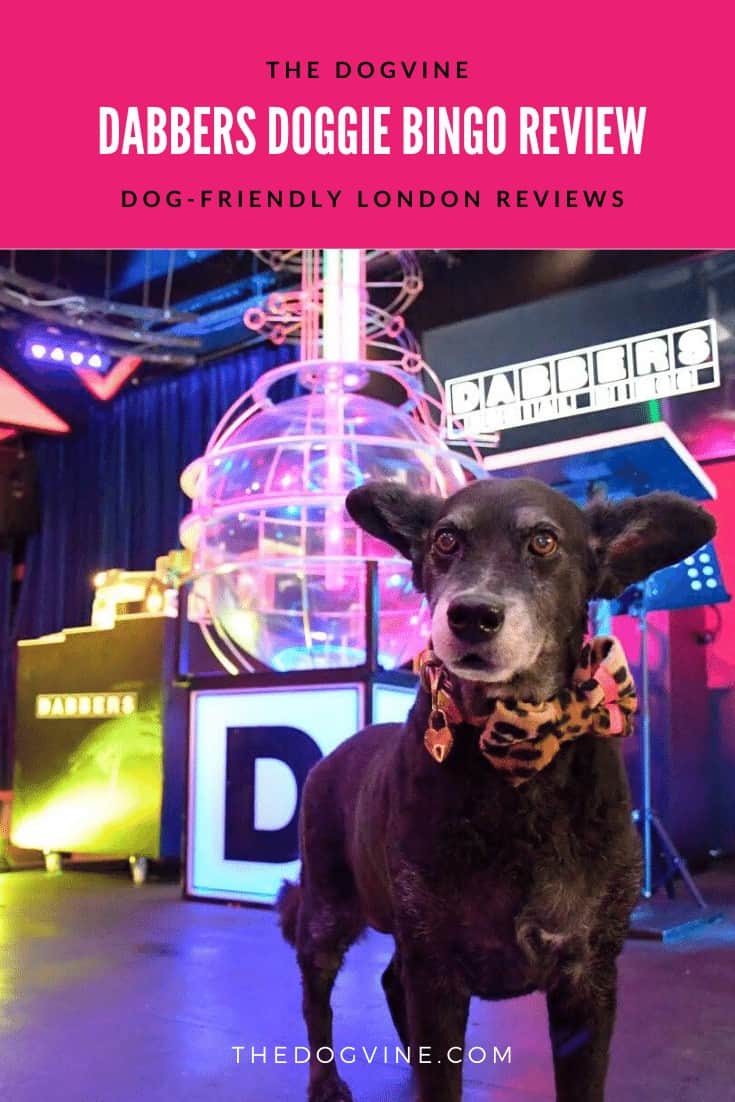 If you’re looking for more dog-friendly things to do with your pup, why not check out our ‘Guide to the Best Dog-friendly Things to Do In London‘.

We were invited to attend Dabbers Doggie Bingo however, all views are my own genuine and honest opinions.