If you are readers of our blog you will know that we were lucky enough to be invited along to the National Pet Show at ExCel last weekend. This was our second year at the show and we had a thoroughly wooftastic day (again). For those of you who weren’t able to make it to the show, here’s what made it a winner for us…

1. It Really is Doggy Heaven…

With lots of cute and adorable canines ready to meet and (extremely enthusiastically) greet you. If like me, you’re one of those people who can’t walk by a dog in the street without saying hello, be prepared for a very long day! 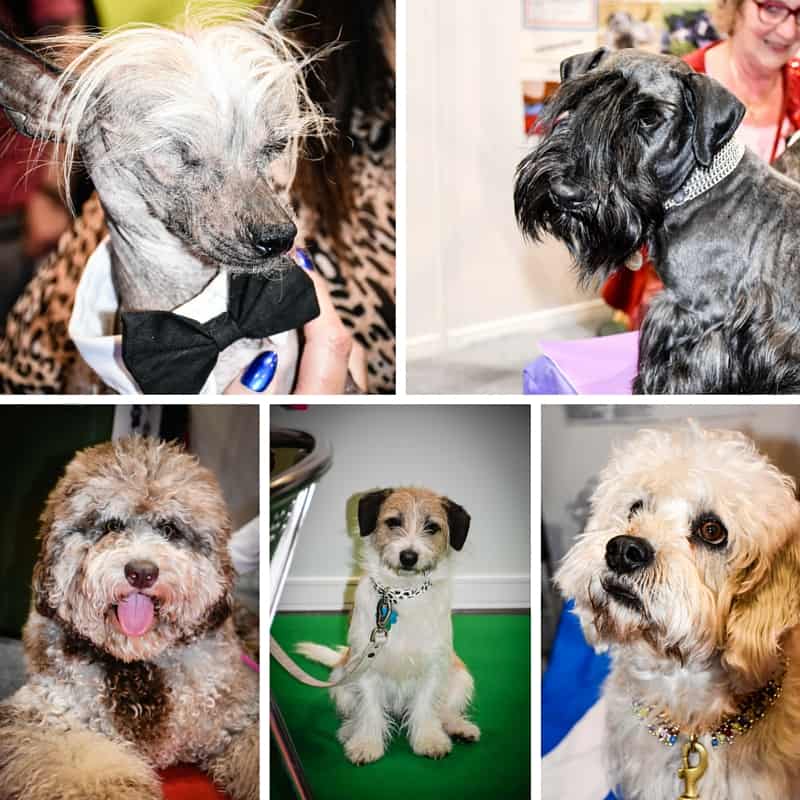 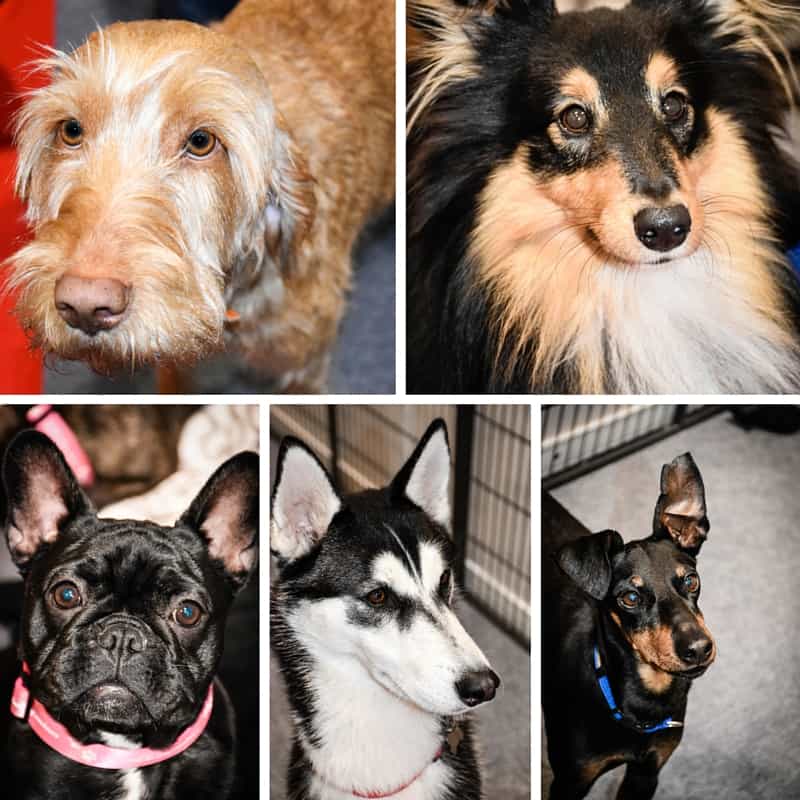 2. Lucy Heath and Her Canine Crew Have Got Talent

We got to see Lucy Heath performing with three of her very clever canines throughout the day and they have definitely got some moves going on. Here is Lucy with her very talented dog Indie – tune into Britain’s Got Talent for more of Lucy and her crew’s doggy dancing (and to support her).

3. London Dogs Are Big News & The Puparazzi Love Them 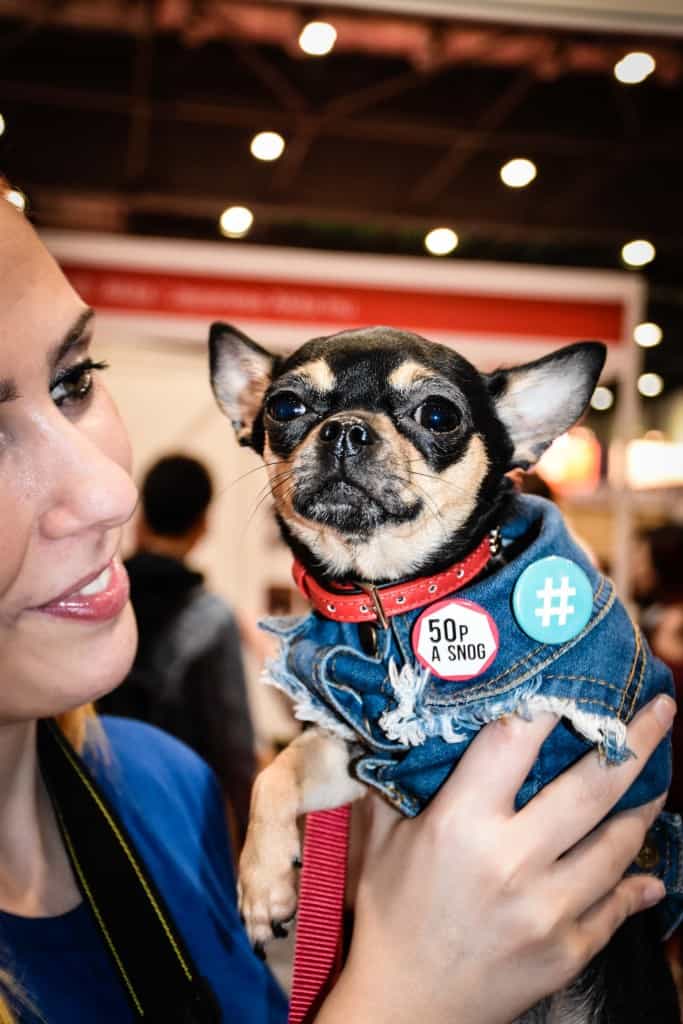 Dolly Pawton might be small in stature but this little girl has got some sass and a rather large Instagram fanbase, all 23,000 of them. Fortunately they didn’t all turn up to the Meet and Greet Famous Dogs stand.

The lovely part to Dima’s story is that all of his dogs were once dogs with aggression problems. It certainly shows what lots of love and a positive training approach can do as Dima has re-trained them into proper little super stars. Keep up the pawsome work Dima, Teddy & Heston, we are big fans!

5. Sometimes Things Aren’t As They Seem…

What seems to be a rug is actually a long-haired Lhasa Apso taking a nap;  Or a teddy bear in a pink cardigan is actually a mini Pomeranian called Lulu (or Dante as she was known for her TV appearance in the We Buy Any Car advert). Confused? Probably, but one thing is for sure, they’re extremely cute. 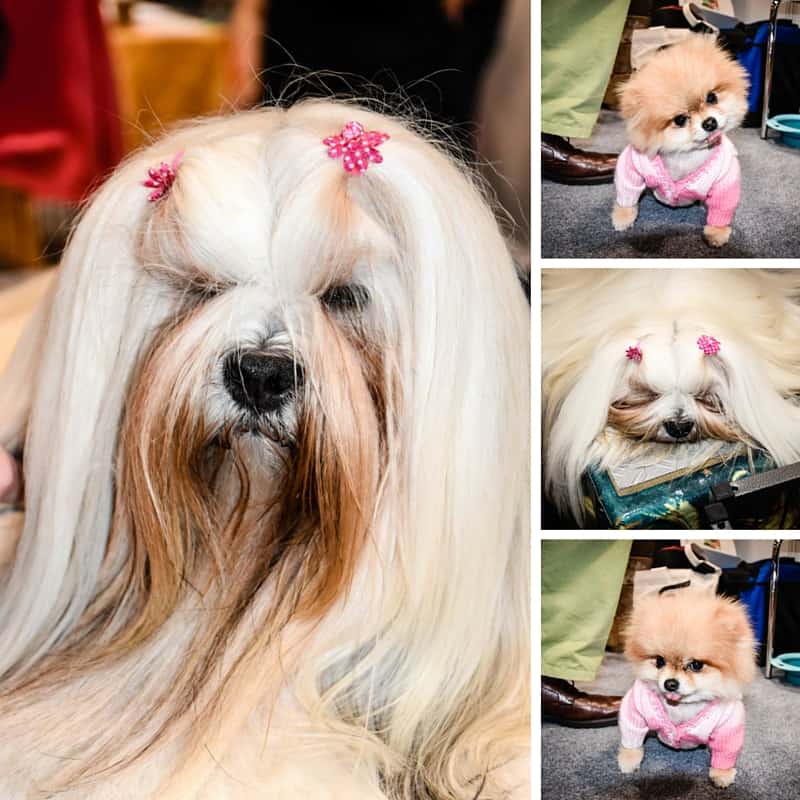 6. Golden Retrievers Are an Obedient Bunch

The Southern Golden Retriever Display Team did a good job of showcasing this with their obedience routine. We’ll let the one off in the middle who goes for a wander…

7. We Got to Meet Some Lovely New London Doggy People

We met some very cool canine brands but two of our favourites were Dogsnug and Butternut Box. 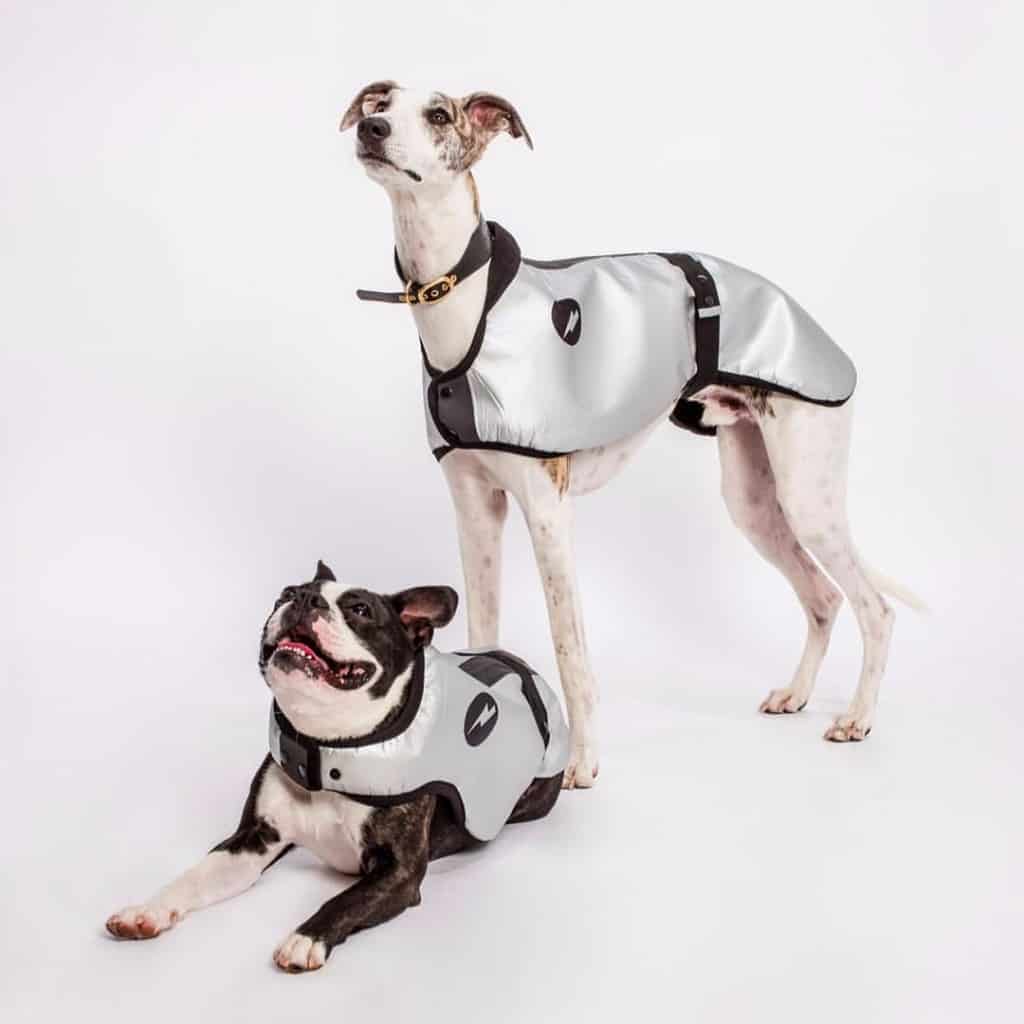 Dogsnug sum themselves up as a  London company making luxury accessories for Dogs on a mission. It all started with their superhero coat pictured above inspired by their whippet Kai; we LOVE the thought of our pups having their very own superhero coat and looking so dapper on their ‘mission’. The coats have a little superhero lightening symbol on the side and you can keep this or have your Dog’s initial instead, plus they come in fabulous colours. Dogsnug also make leads and collars, hand making  and producing all their products locally. We came away loving this London brand and we’ve definitely got our eye on one of those gold coats. 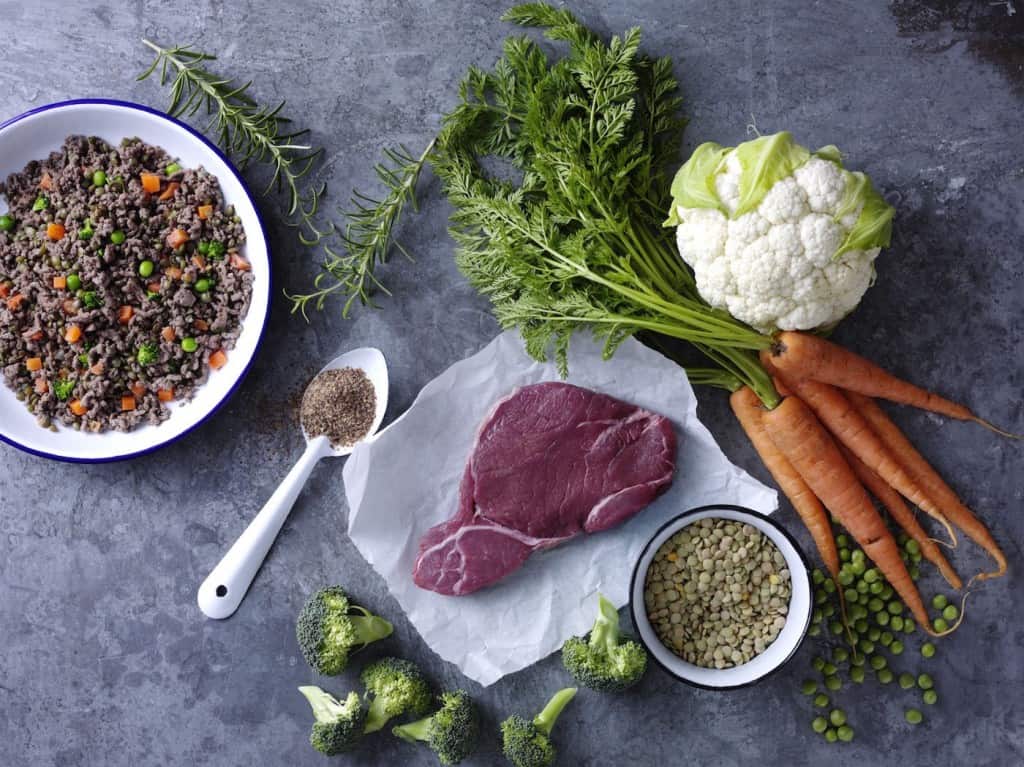 At first glance Butternut Box appeared to be another weekly/monthly subscription box of toys and treats, but after chatting to the team on the stand, it turns out that this is a great twist on the subscription box concept (especially for people like me who have zero culinary skills). A family run London business that has just launched, the Butternut Box is a week’s worth of freshly cooked dog food that provides the equivalent of a home cooked meal for your dog (backed up by the expertise of animal nutritionists of course). I’m sure this concept will be a winner for those with busy hectic lifestyles who want to ensure their dog has a healthy wholesome diet. Butternut Box offer a week’s free trial and for every dog that is signed up, donate a meal to a rescue / shelter dog….high paws from us!

8. It’s not just about the dogs

Although I was clearly distracted by all the dogs, some of the other animals deserve a special shout-out. This owl seemed to know he wasn’t getting the attention he so clearly deserved and his total stare-down says it all! After being initially rather disturbed by the helmet the second chap was wearing, I was politely told that it was necessary to avoid this particular bird of prey going in search of an early lunch (of which there was plenty to choose from where we were). Fair enough, I can see the need now. 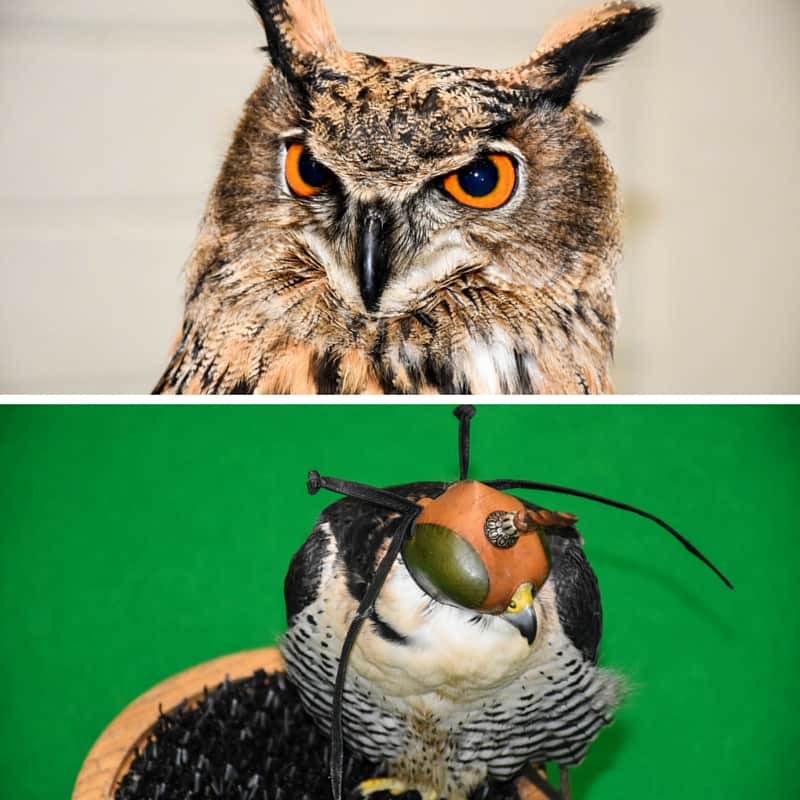 Before we finish it would be wrong of me not to mention the cats. They were many and they were impressive – the hair-less Spyhnx cats being a surprising favourite. I did try and photograph them but unlike the eager slobbery welcome that I received from the dogs, I was met with a look that conveyed clear disdain, quickly followed by an about paw and the offer of a (hairless) rear-end shot. Oh well, I guess there’s always next year at the National Pet Show to try and win them over.