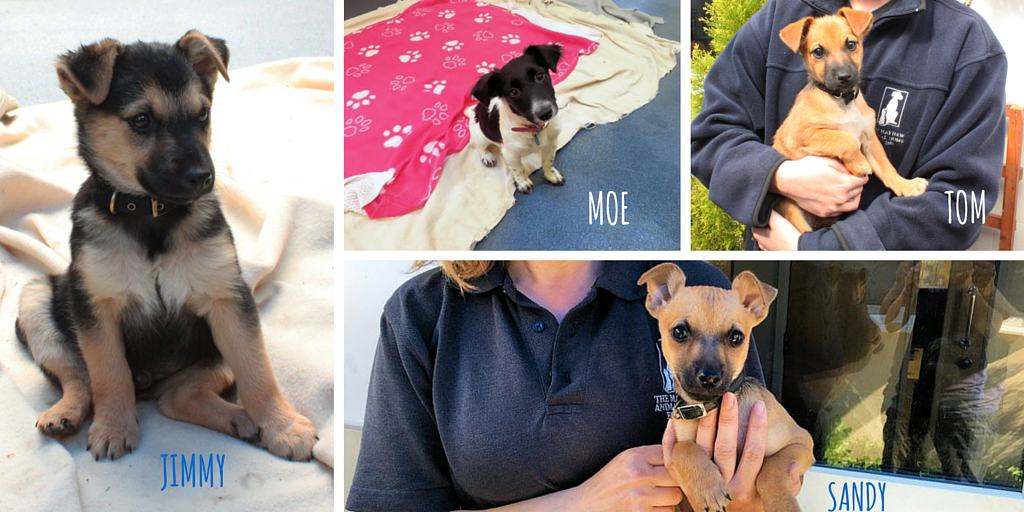 Aren’t these 4 just the cutest pups?! When we heard from our friends over at The Mayhew Animal Home they were looking for homes, we couldn’t believe how adorable this pack of pups were. Sadly, their cuteness hides a sad but increasingly common start in life…

Aged 2-3 months old, the four pups – two female and two male, were bred by a breeder to be sold for profit. When they were left unsold, they were no longer wanted so The Mayhew’s Animal Welfare Officers stepped in to rescue them and brought them to the Home.

These pups are just four of the 560,000 puppies born in England each year (according to Defra records). And even though the UK is a nation of dog lovers, it is becoming a more and more frequent occurrence that if puppies are unable to be sold, they are often callously disposed of, especially if the breeder is unlicensed.

Animal Welfare Manager at The Mayhew Animal Home, Zoe Edwards, said: “Unfortunately we see a lot of unwanted pups as they are bred purely to be sold for profit. When they are not sold, the breeders end up dumping them so luckily we were asked to take these pups into The Mayhew which we did immediately. We ask that owners think responsibly about where they get their pets from and consider adopting a rescue dog, as pups that can’t be sold for profit end up at rescue centres like ours.”

The four puppies, named Jimmy, Moe, Tom and Sandy by The Mayhew staff, came in with fleas but are otherwise in good health. They have now been given a thorough health check, wormed, de-flead, microchipped, vaccinated and neutered by the on site vet team at The Mayhew.

Lisa Guiney, Dog Adoption Officer, said, “All of the pups are curious, outgoing and playful and are keen to learn. They are looking for owners who are experienced with dogs and have plenty of time to continue their training and socialisation so that they grow up to be well-behaved dogs. All of the pups need to have someone at home for most of the day.”

I’m sure you’ll agree that these four are simply the cutest pups, and we’ve just heard (hot off the press), that Jimmy and Moe have already been reserved and are one step closer to their forever homes. This is pawsome news and honestly, with those faces we’re not surprised.

However, the adorable Sandy and Tom are still looking for theirs, so we wanted to share their story to help spread the word. If you’re interested in adopting Sandy or Tom, here’s what you need to know:

For more information you can call The Mayhew Animal Home on 020 8962 8000 or visit www.themayhew.org/adopt.

Keeping our paws crossed for Sandy and Tom. #AdoptDontShop

The Mayhew’s Animal Welfare Officers rescue neglected, abused and abandoned animals and work with communities to prevent issues arising in the first place. They also deliver a range of educational projects to tackle irresponsible ownership and provide support to pet owners in difficulty. The Mayhew also has a vet clinic on site which offers affordable preventative veterinary treatments, including neutering, microchipping, vaccinations and dental care.

END_OF_DOCUMENT_TOKEN_TO_BE_REPLACED

Virtual Dog Events Up Next