Savage Garden, one of London’s top rooftop bars has definitely not gone to the dogs but what they have done is opened their rooftop to London doggos for the fabulous new Savage Garden Dog Brunch on the first Sunday of every month. We were invited along to the inaugural rooftop dog brunch by co-hosts and special guests, ethical London pet accessories brand Hiro + Wolf to see what it was all about… 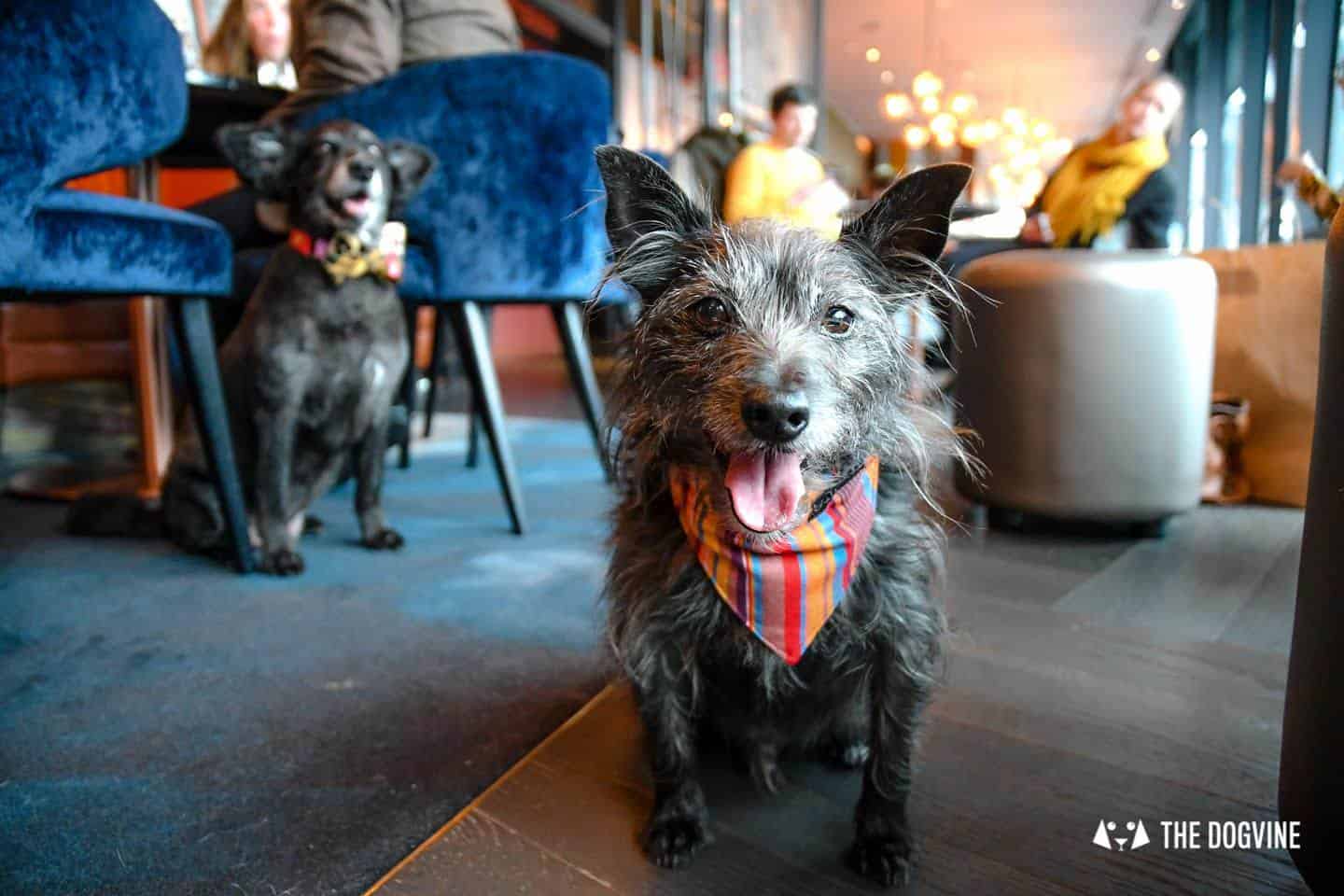 Set atop the Double Tree by Hilton in Tower Hill, Savage Garden screams decadence from the moment you step out of the lift. Views to die for of the London Skyline, beautiful decor that is luxurious yet cosy and a menu that is out of the ordinary all await.

More on all of that in a moment. 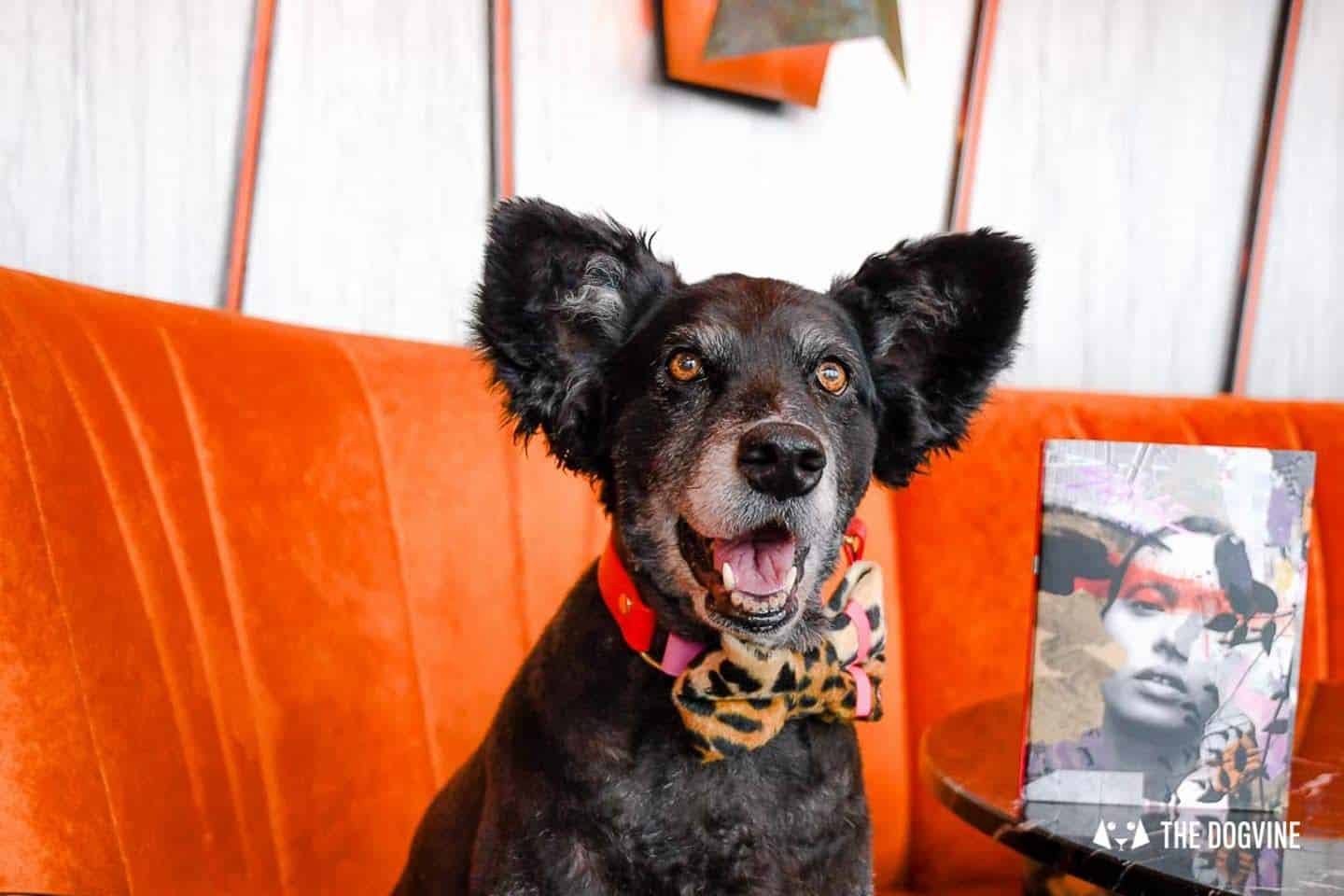 It’s actually a real privilege for dogs to be welcomed to Savage Garden for the dog brunch as Savage Garden is not (yet) dog-friendly as the norm. Although that could be the long-term plan, Savage Garden are dipping their paws into the world of welcoming pups with the rooftop dog brunch on the first Sunday of the month being the start of their dog-friendly journey. 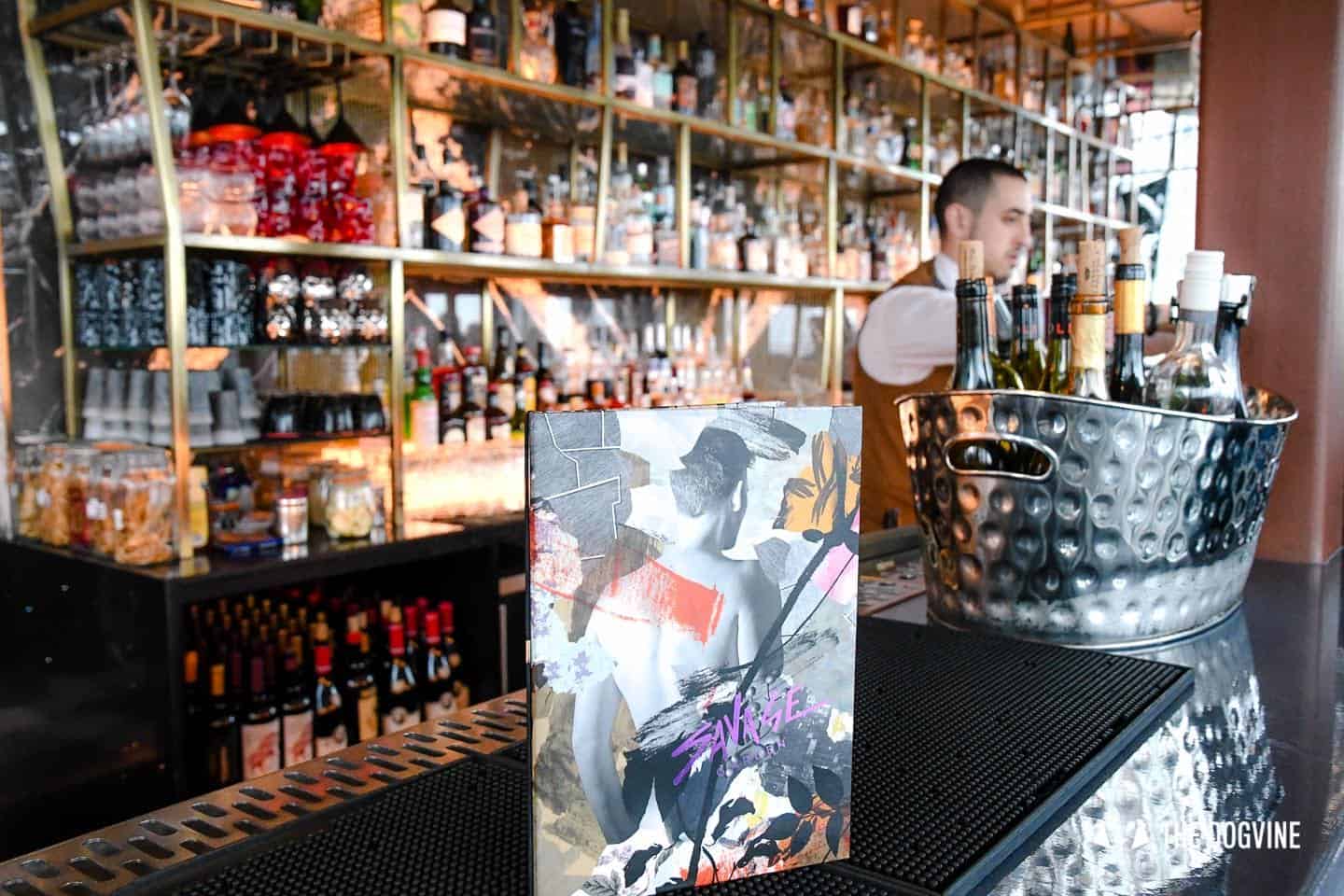 We went along with our good friend, Lilliput the Maltese and had an absolutely fabulous time. Just in case you needed convincing to attend a rooftop brunch for dogs (that in itself has me reaching for my phone), here’s our top three reasons why we think you’d be barking mad not to put the Savage Garden Dog Brunch in your doggy diaries… 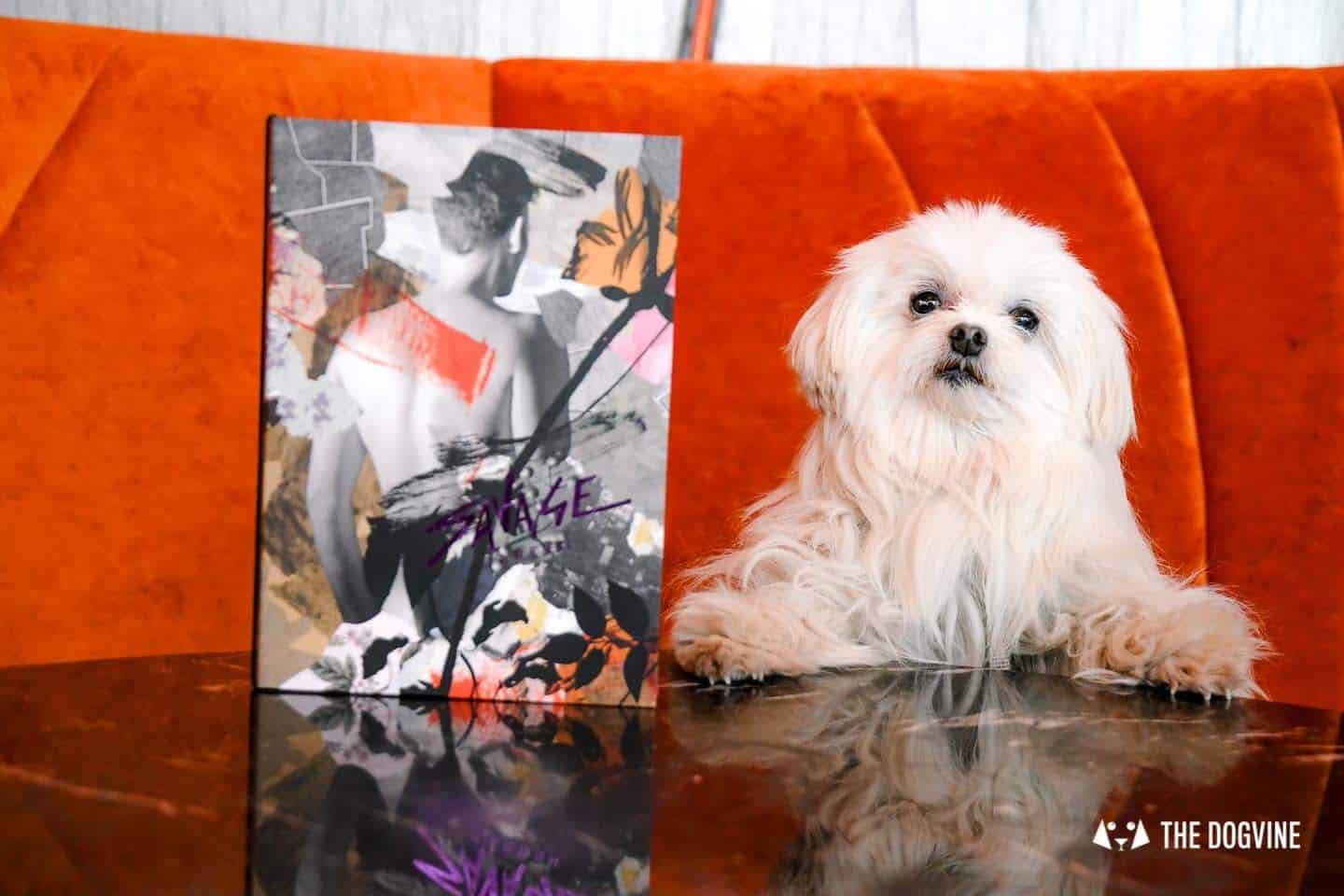 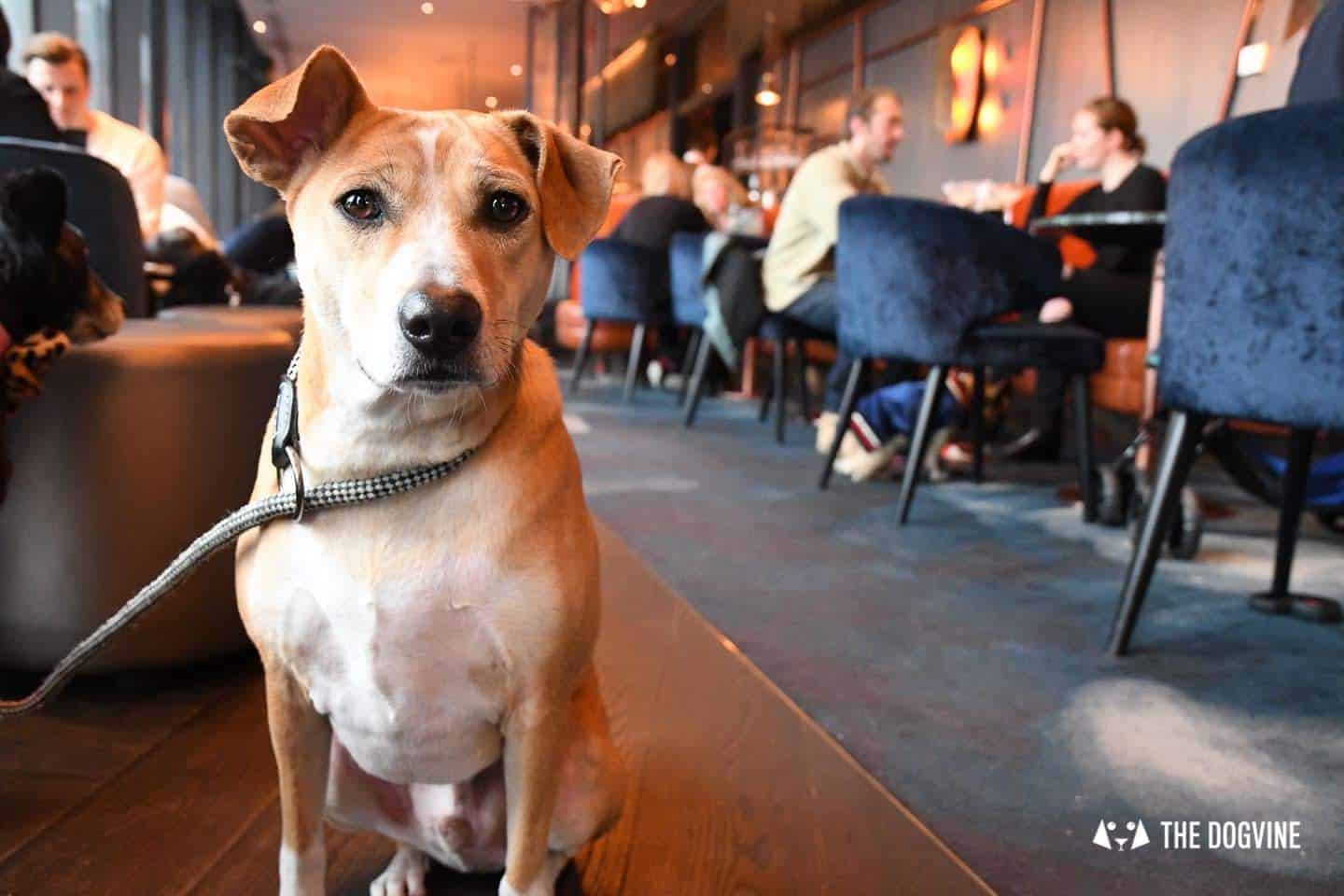 Dog brunches are popping up across London but none in such a gorgeous venue as Savage Garden. It’s a beautifully designed space that is luxurious yet intimate at the same time. 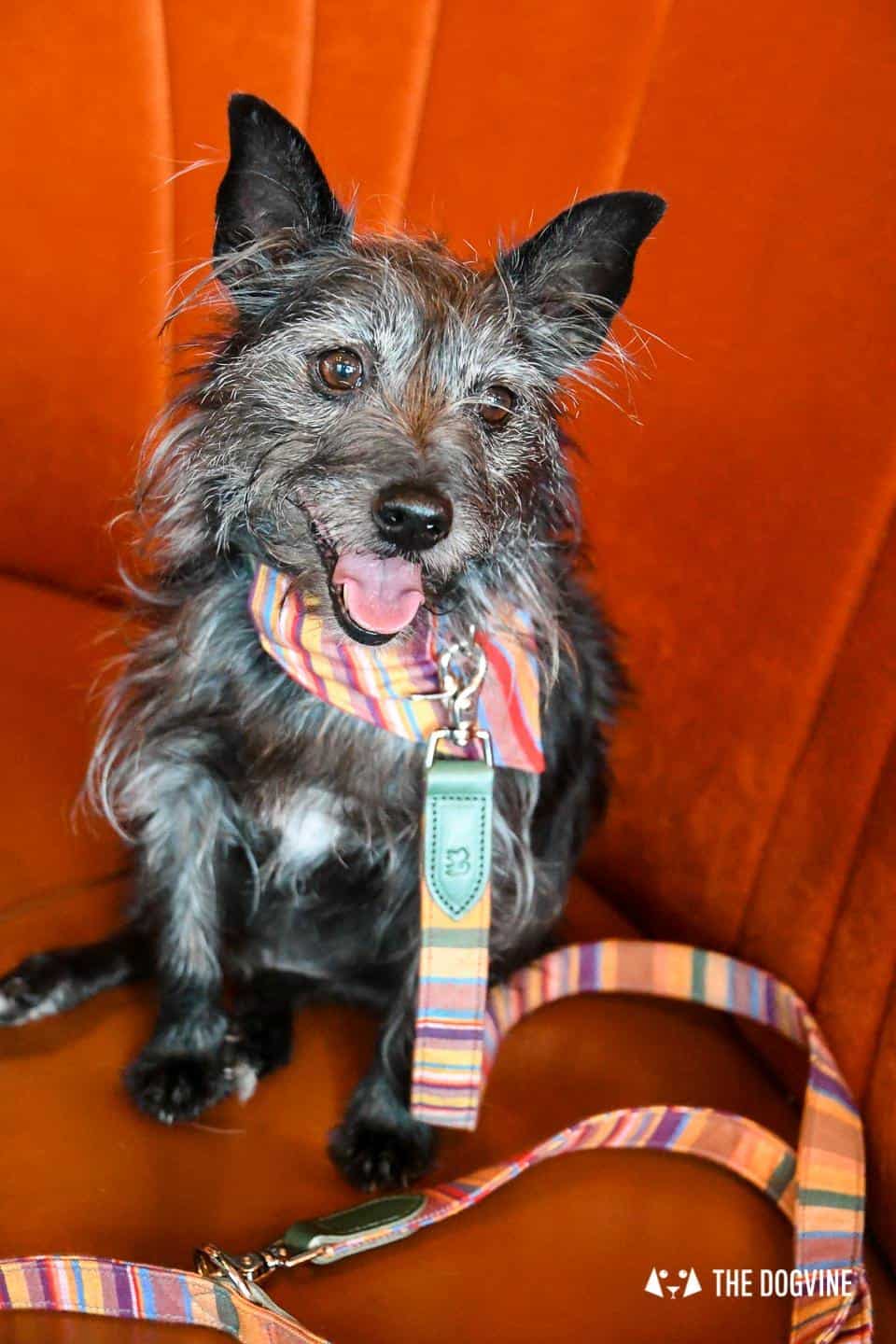 Beautiful burnt orange banquettes line one side of the space with low tables and velvet chairs lining the other, yet somehow leaving plenty of space for humans to mingle and hounds to lounge. 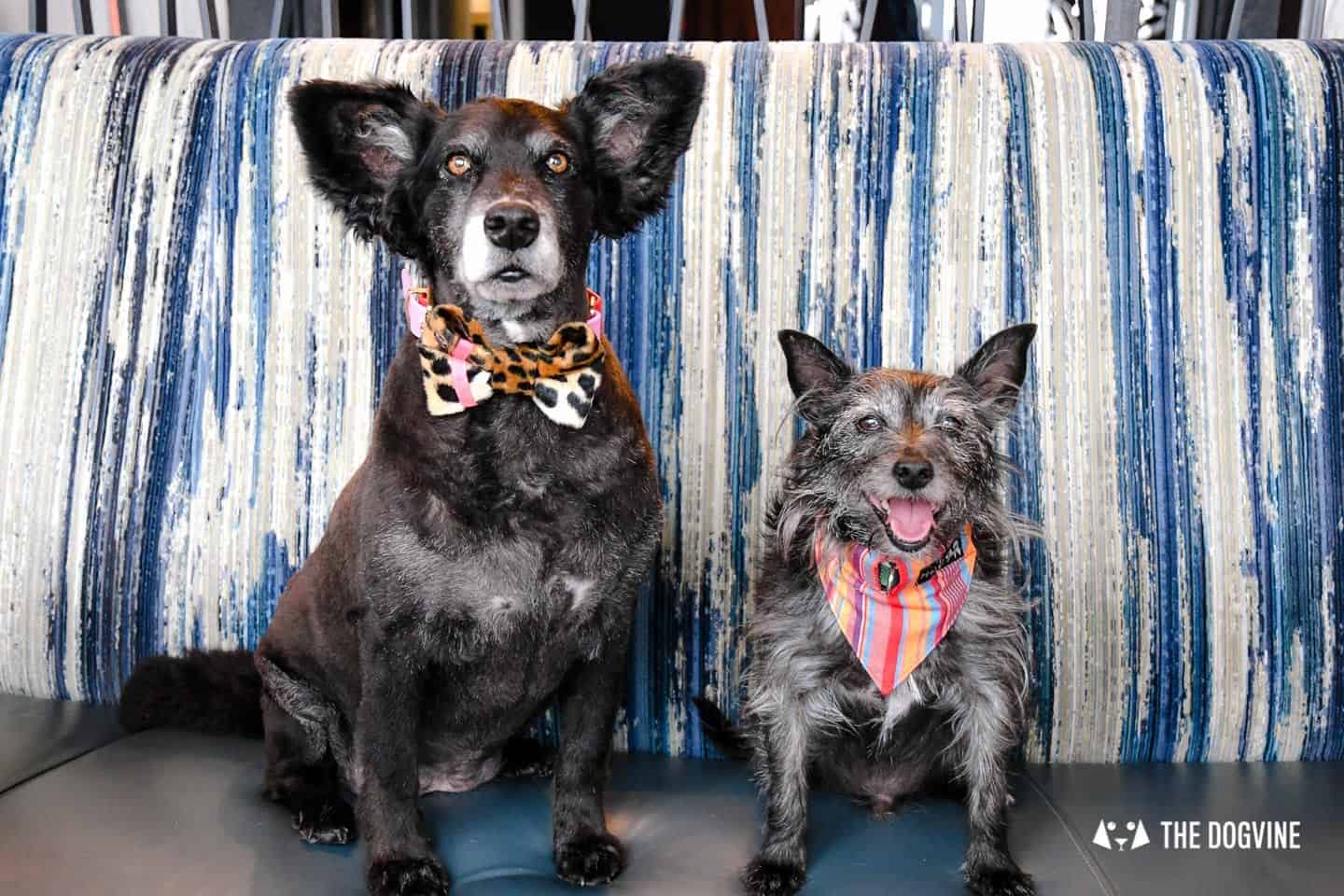 At the far end of the space, there is a bar area with a terrace overlooking the Tower of London and for summer, the larger terraces will also be open, so that alone is another reason to visit for sure.

The Savage Garden website promises ‘dramatic cocktails and savage menus’ and although we didn’t indulge in the cocktails, the menu was just as dramatic.

One thing that I liked, was that it wasn’t a set menu as is often the way with doggy brunches around town. You can take your pick from the à la carte menu which is one of the most interesting menus I’ve seen in a long time. Prices were reasonable too, with starters, sides and desserts at £4-£9 and mains at £12-£16. 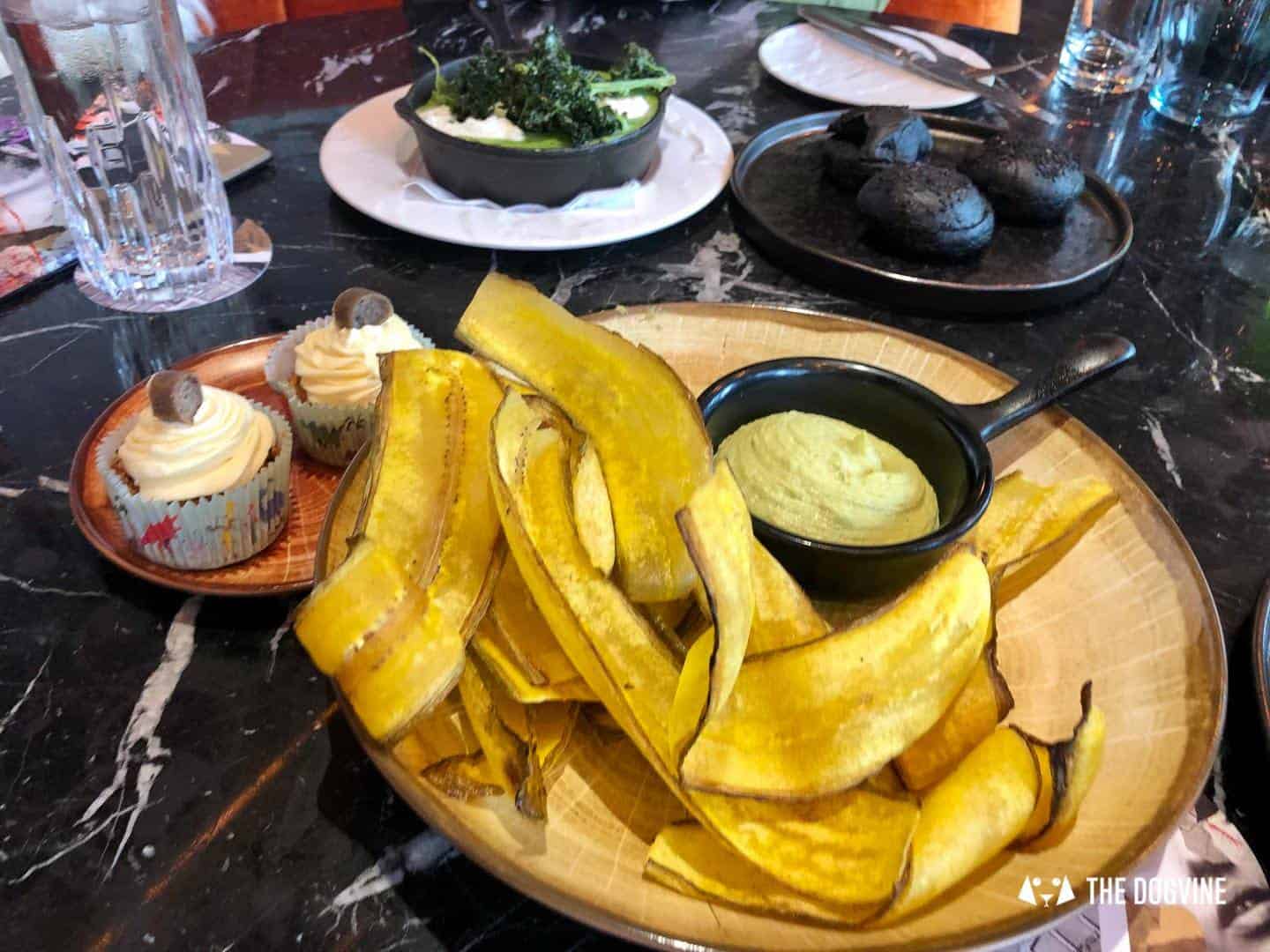 We had the Plantain Chips with Lime Chilli Salt and Avocado Hummus to start, then I decided to try the Chou-fleurs-du-mal Cauliflower, Labne Zoug, Chilli Roasted with Grains and Craisins which was probably the tastiest (half a) cauliflower I have ever eaten. In true manly style, Peter kept it more traditional with the Savage Brunch Burger with Applewood Cheddar, Bacon, Avocado & Jalapeno Mayo (with fries), which got a very positive review. The only comment I would add is that it would be great to have more on the menu for vegetarians in the future. 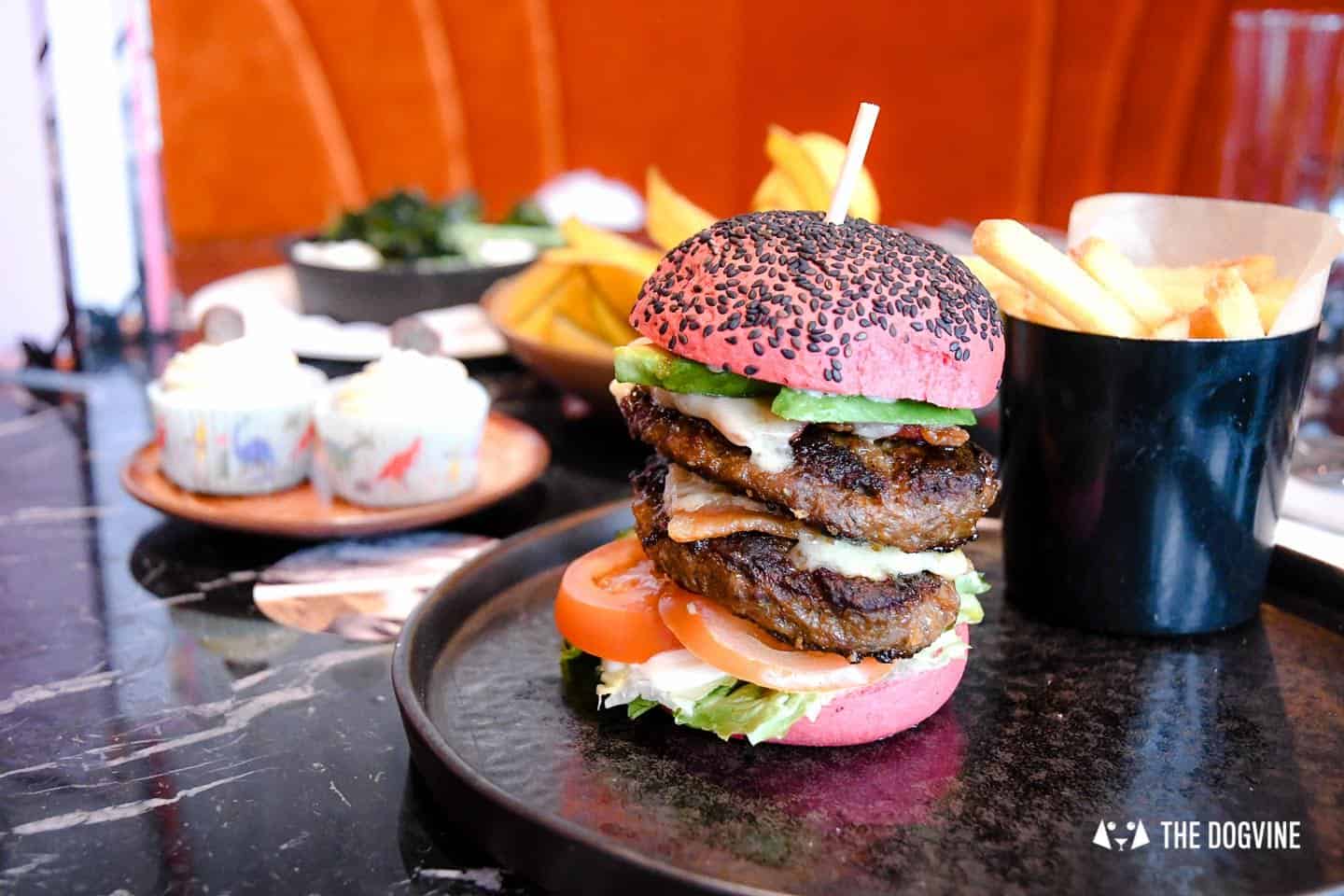 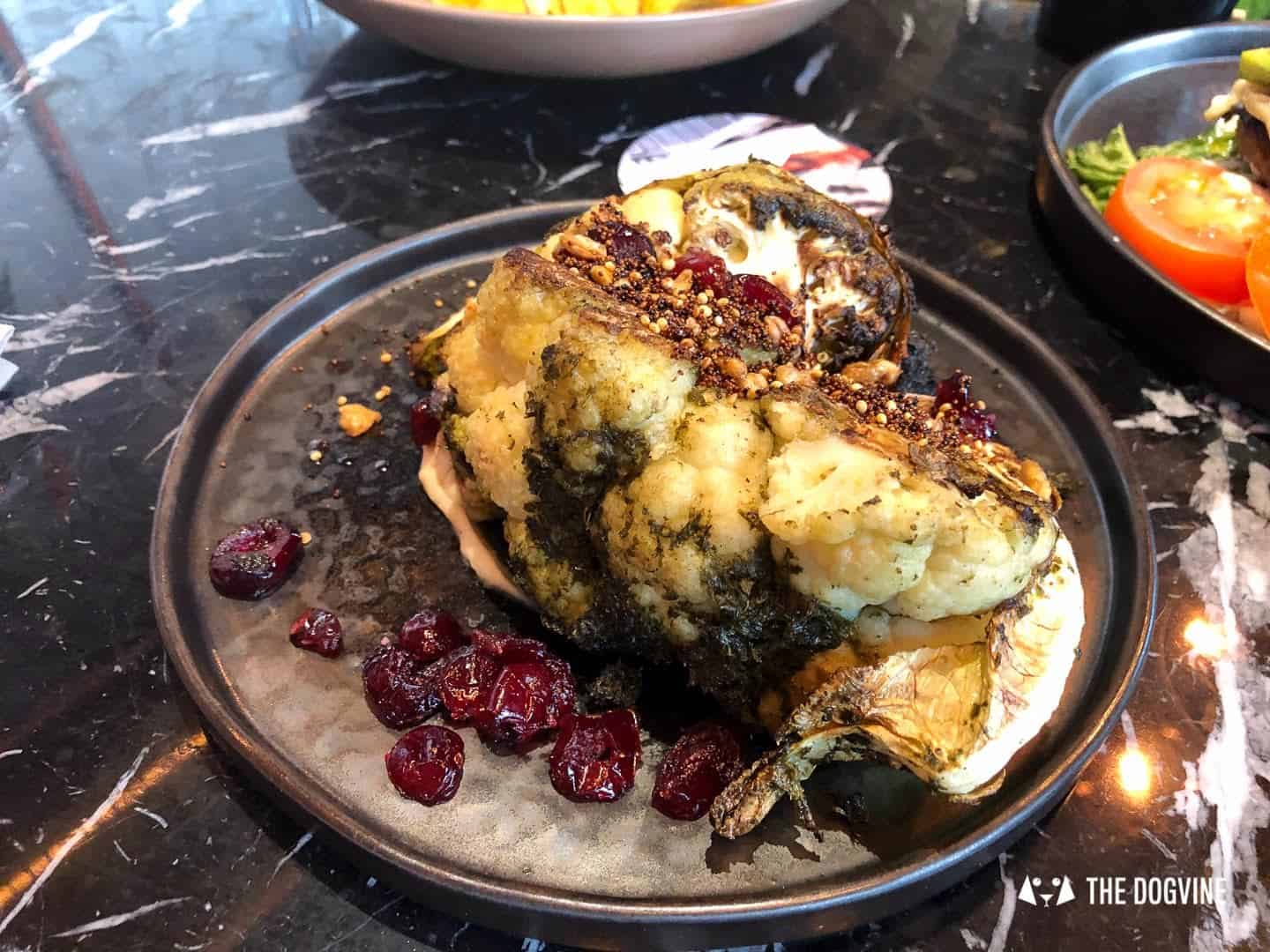 Savage Garden definitely saves the best to last on the menu with the Savage Doughnut shots that come with two syringes to inject the fillings of Salted Caramel or Raspberry & Thyme. How decadently delicious is that! 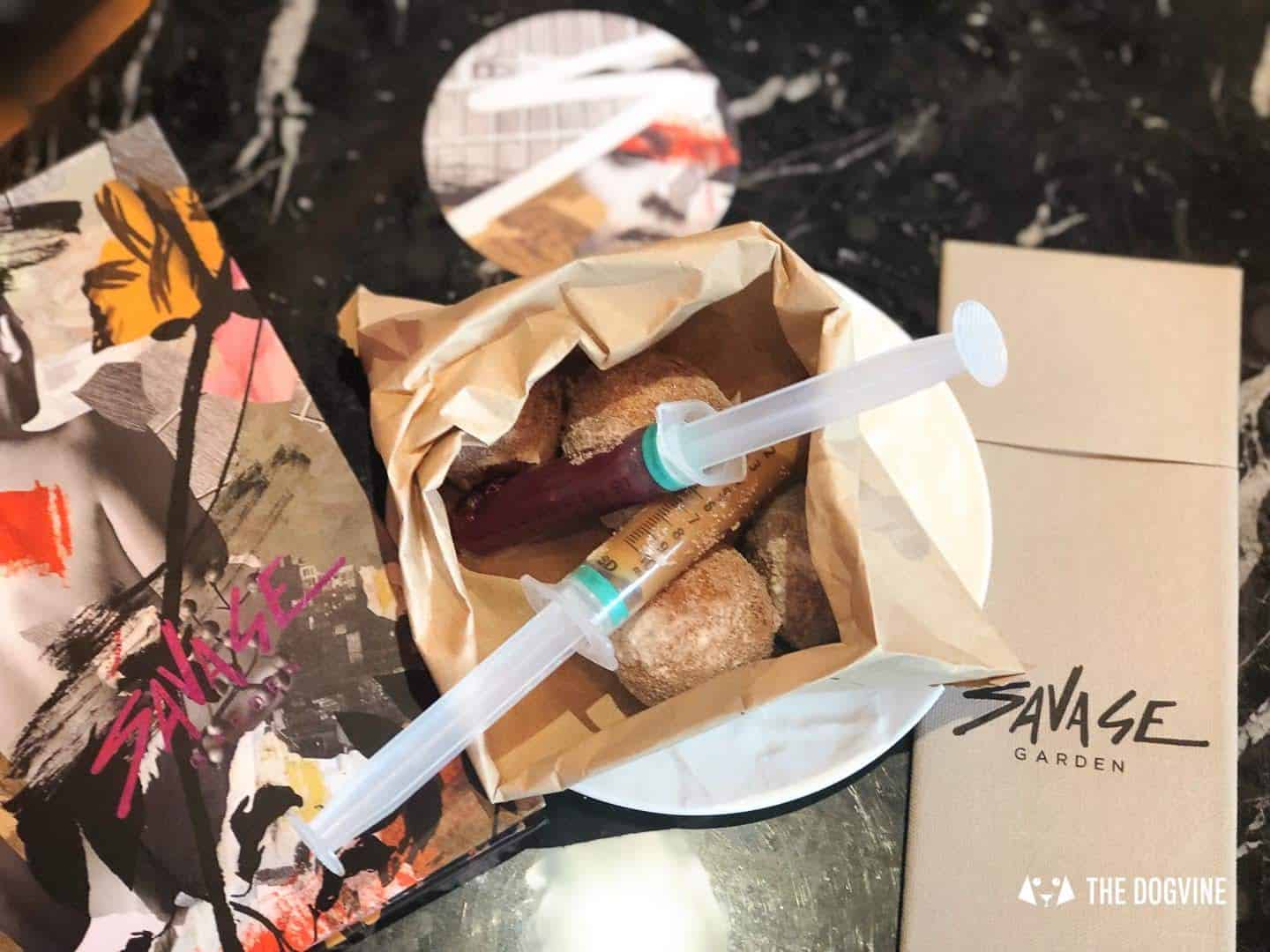 And of course pups aren’t forgotten as they get their very own beef filled specially created ‘Savage Pupcake’ to devour whilst the humans are enjoying their brunch. The chefs have clearly created a very tasty pupcake as neither Belinha nor Lilliput could contain themselves in trying to get hold of one. 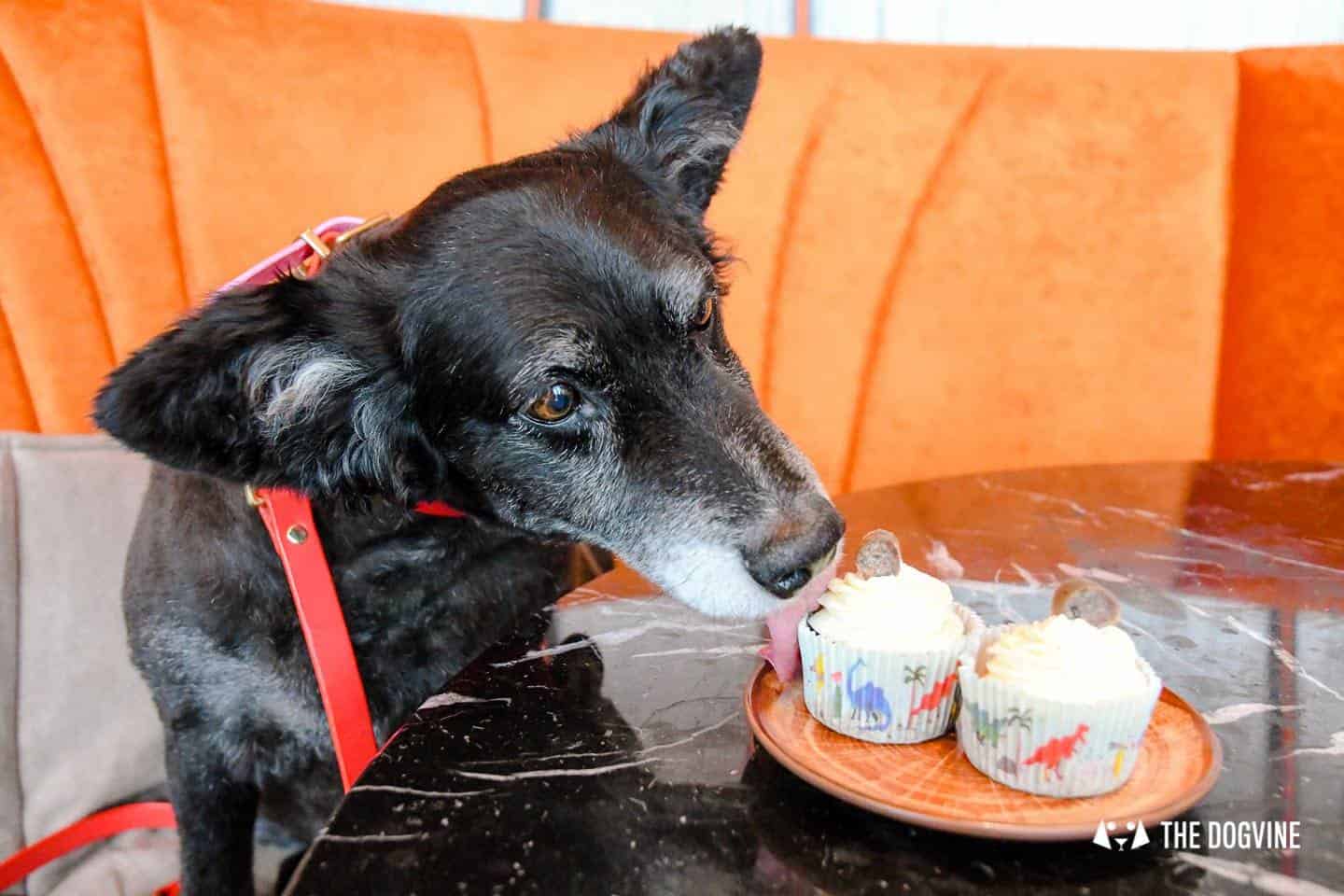 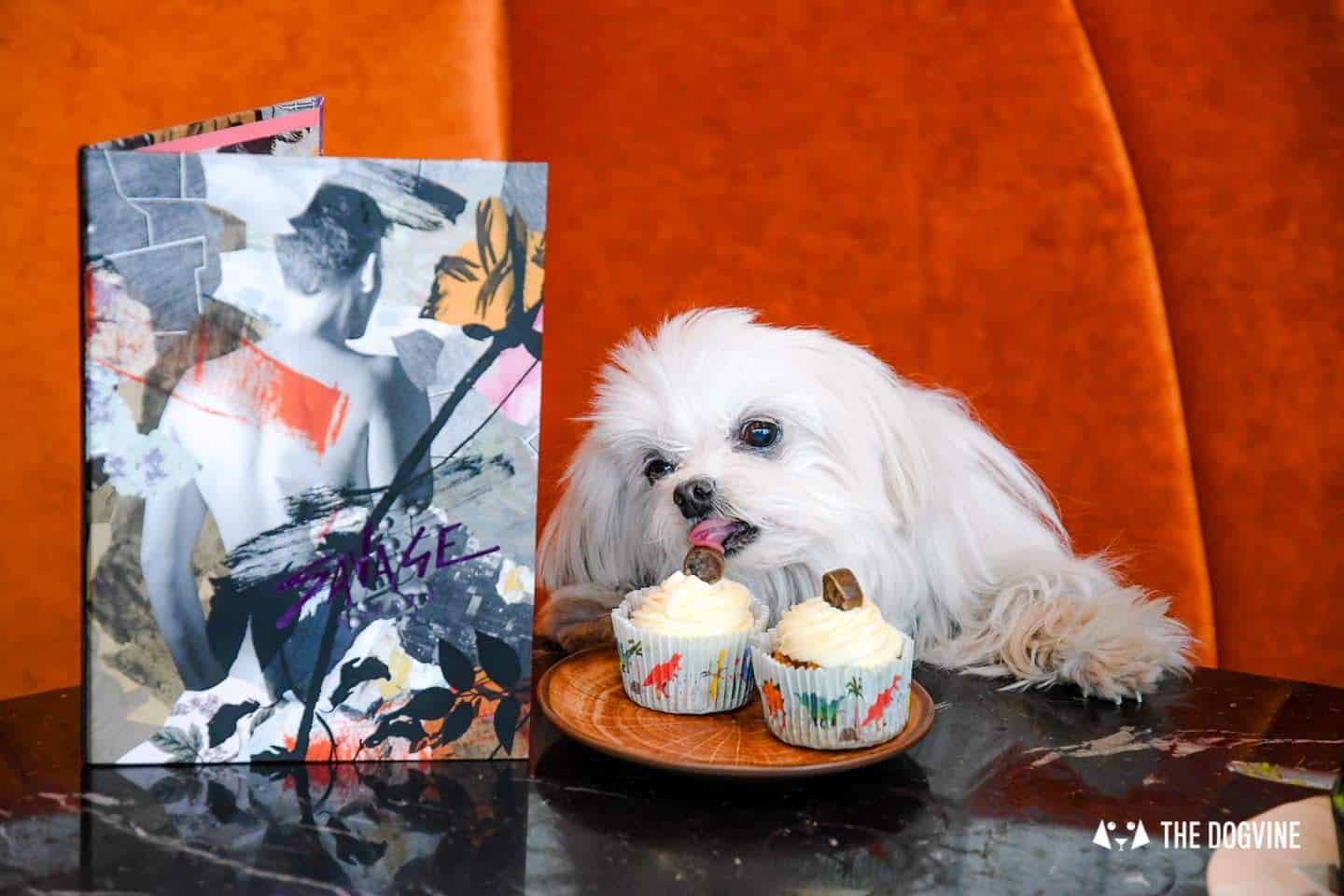 The day we visited was cloudy and overcast but we still got a taste of the stunning views of the London skyline. It was a first for us to get a view of Tower Hill & the Tower of London from above, and you can also spot The Shard, St Paul’s Cathedral as well as The Gherkin depending where you look. 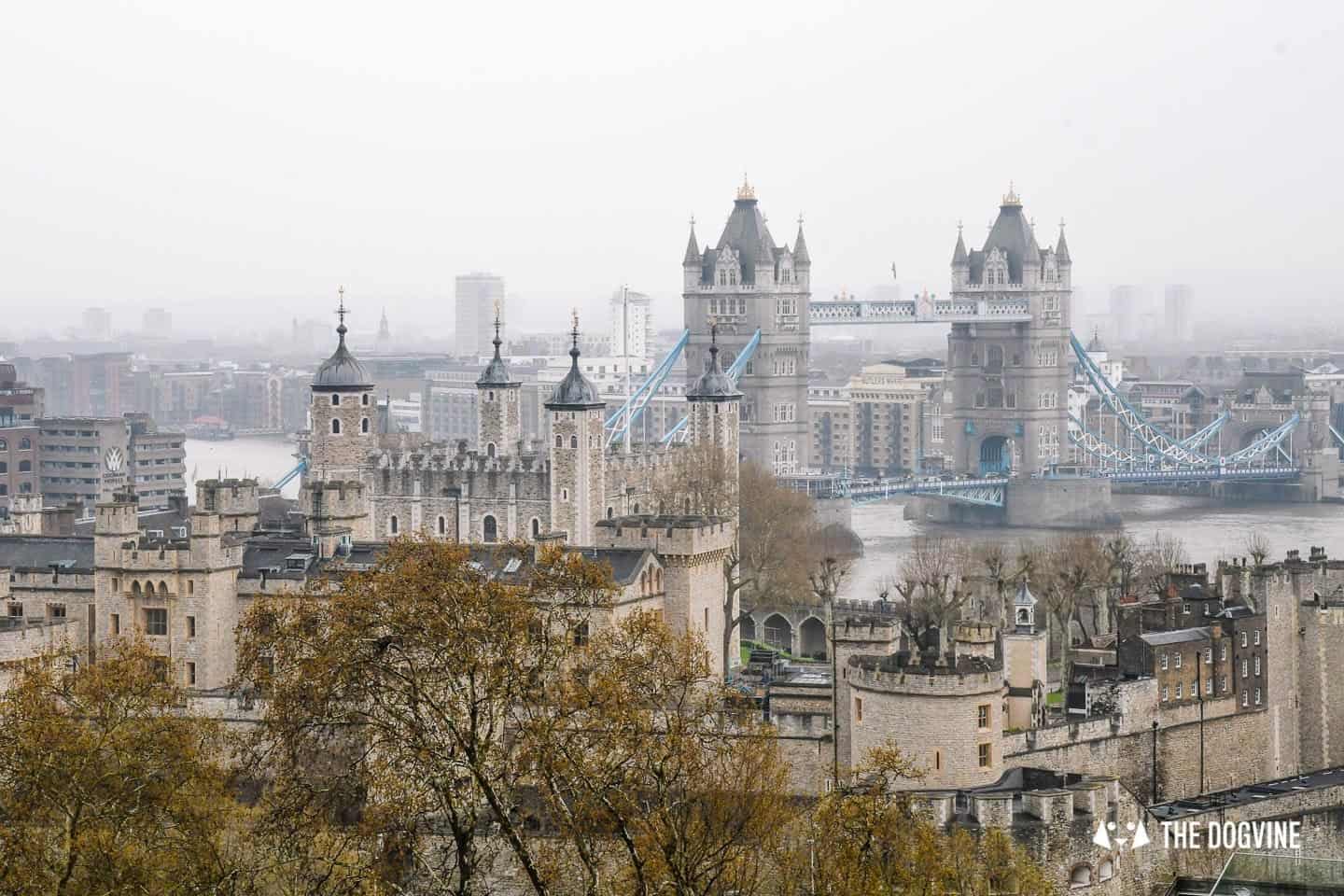 Of course your pup won’t have the same levels of appreciation for the views as they do for the pupcakes but they will certainly pick-up on your ‘love the view, feel-good vibes’. 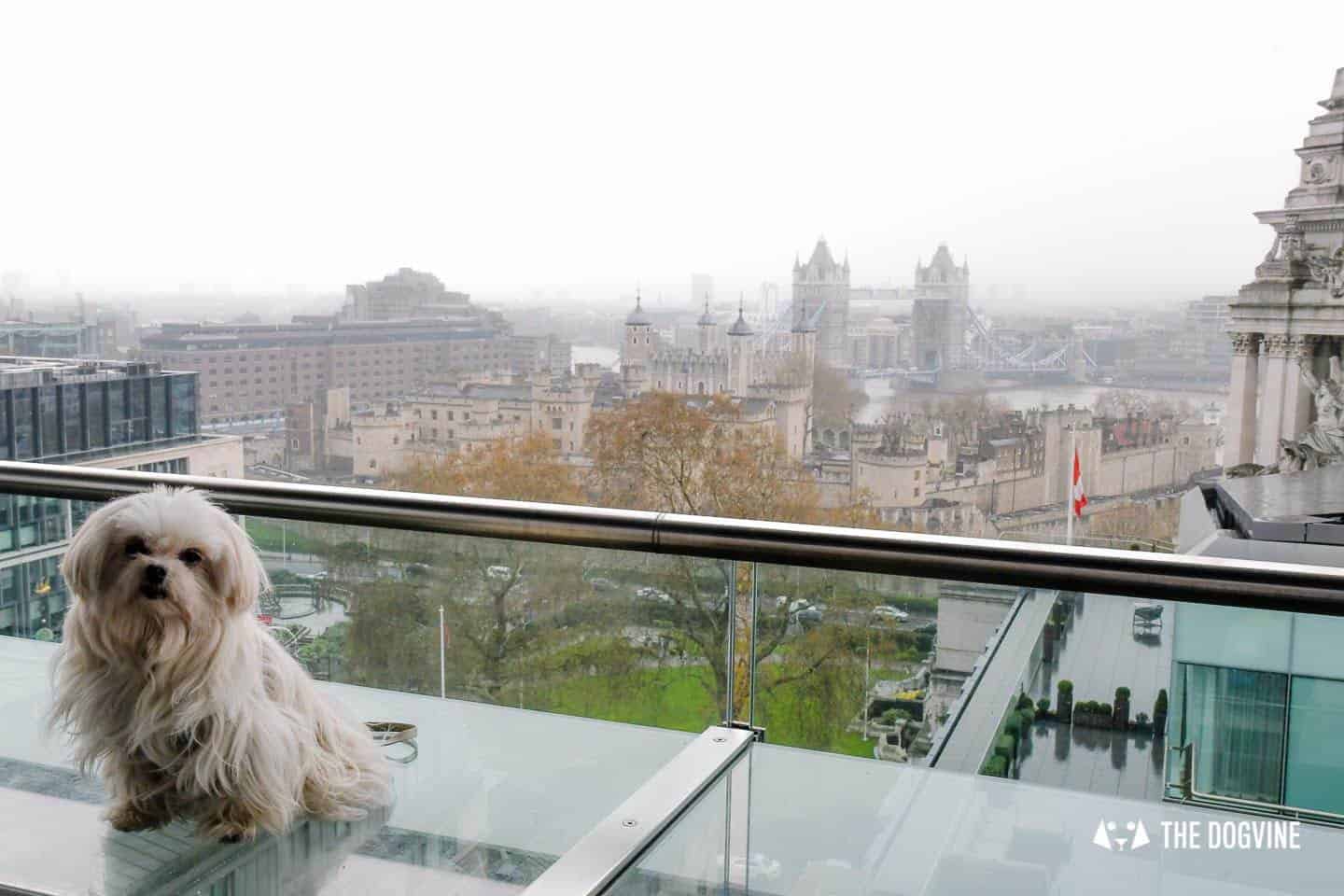 So was it a Paws up from us for the Savage Garden Dog Brunch?

Absolutely, yes and we weren’t alone. We met lots of four-legged friends old and new, with tails wagging like crazy.

We were well looked after too, not only by the Savage Garden staff but by Wolf, one half of the Hiro + Wolf duo who took his hosting skills very seriously, making sure to visit all the tables and check that all the pups were having a pawsome time. 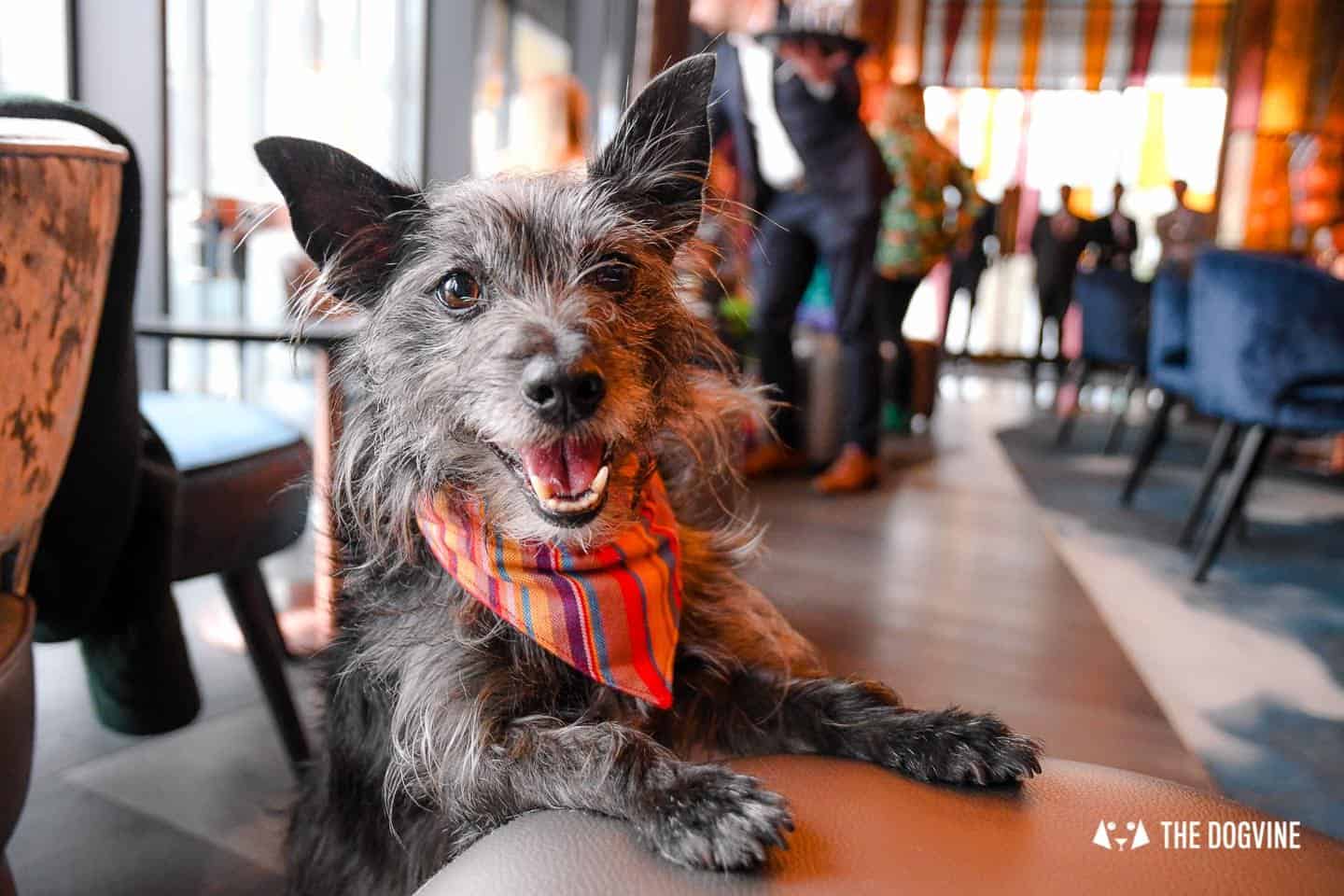 Wolf also made sure that every pup left with a gorgeous Hiro + Wolf goody bag containing tasty treats and a dapper bow-tie to keep them looking their best – just like Geoffrey who we think looks fabulous in his! 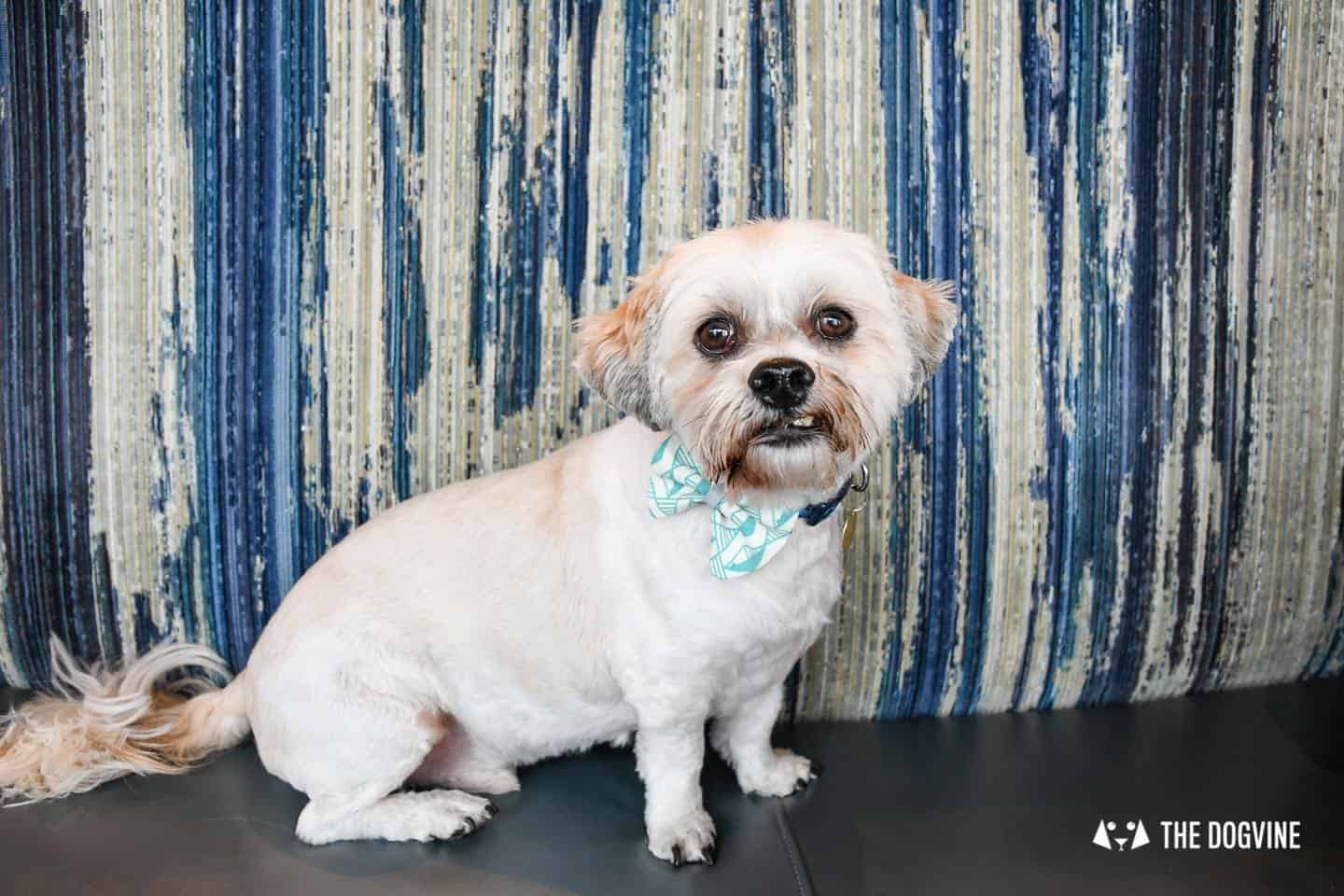 So London dogs, if you want to come along to the hottest dog brunch in town, then get your humans to book your table – the Savage Garden Dog Brunch takes place monthly on the first Sunday of the month and we’re told bookings are already filling up for the next brunch in May. 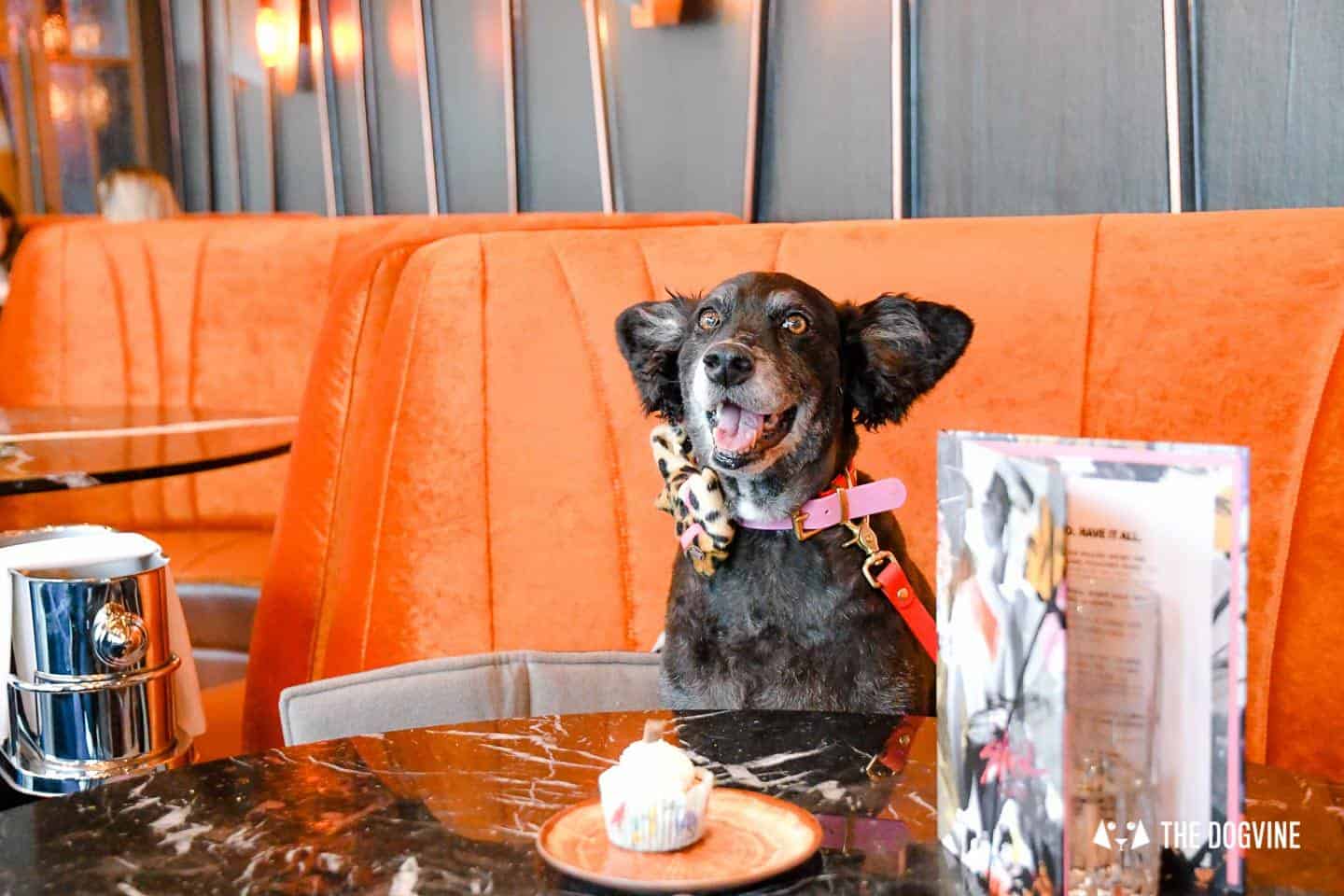 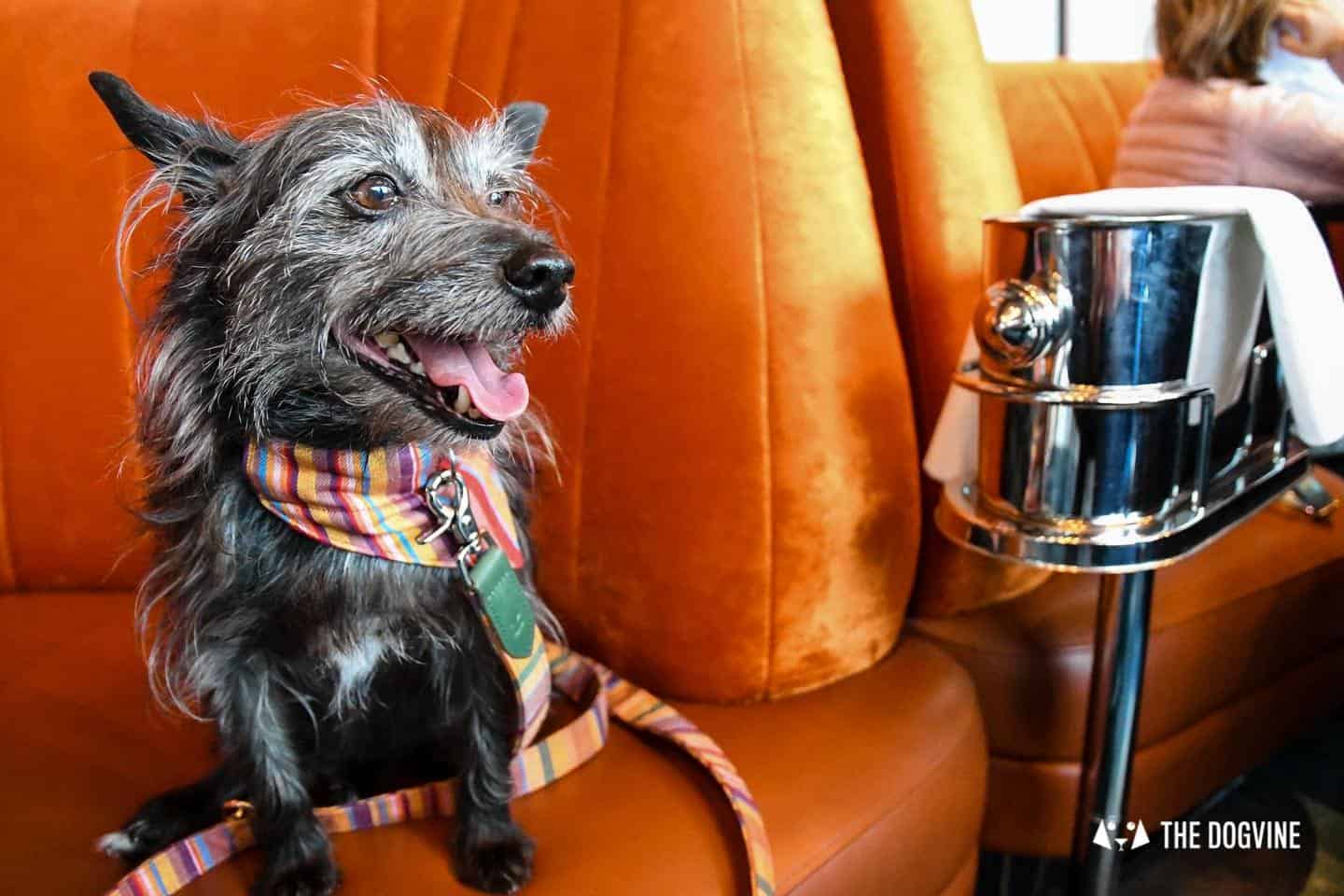 We were kindly invited as guests to the Savage Garden Dog Brunch but that doesn't influence our views and opinions. Belinha dressed to impress with a Bow Tie by The Distinguished Dog Company (#gifted) and collar + lead by Rag & Paw. She's got her eye on several new Hiro + Wolf items for the next brunch though.